Welcome back to our deep dive into the world of BIONICLE, one of LEGO’s longest-running and most notable story-driven themes. We’re now entering the lofty heights of 2003, a year of endings, new beginnings, and the very first LEGO BIONICLE movie.

It was also the year that cemented BIONICLE as one of LEGO’s front-running themes at the time, helping to finally wrestle the company away from the precipice of bankruptcy and offset the losses that other themes were suffering. So what made LEGO BIONICLE such a success in 2003? Let’s return to the island of Mata Nui to find out.

Having defeated the Bohrok swarms, the Toa Nuva begin testing their new tools, masks and enhanced elemental powers, until one day their elements abandon them completely. They find that six specialised Bohrok, the Bohrok Kal, have taken the Nuva symbols from each village to use as keys to unlock the Bahrags’ prison. The Kal have strange new powers of their own that the Toa have not encountered before – Lightning, Vacuum, Sonics, Plasma, Gravity and Magnetism – and quickly find themselves being overpowered.

Despite rising tensions between the Toa’s clashing personalities, they are able to will their lost powers into biting back at the thieves, overloading the Bohrok Kal and ensuring the Bahrag stay locked in their protodermis cage.
The island of Mata Nui enjoys a few weeks of peace, during which the villages are rebuilt, any celebrations are had, and the Toa continue to adjust to their new Nuva powers. It is just prior to a Kohlii match that one Matoran, Takua, discovers the legendary Mask of Light, prophecising the arrival of a Seventh Toa. The Turaga send him and his friend Jaller on a quest to find the Seventh Toa and present him with the mask.

Meanwhile, Makuta hears of the discovery of the Mask of Light and dispatches his six “sons” to ensure the Seventh Toa is never found. These Rahkshi contain the essence of Makuta himself and are armed with staffs of disintegration, poison, fear, shattering, anger and hunger that make them more than a match for the Toa Nuva.

Battles between the Toa and Rahkshi tear the island apart. Ta-Koro, the village of fire, is lost. Takua and Jaller are separated, but the quest continues, until during a conflict at the centre of the island, Takua realises that he was destined to become the Seventh Toa all along. Donning the mask, he becomes Takanuva, the Toa of Light, and delves beneath the island to face Makuta one last time.

Takanuva duels the Master of Shadows for the fate of Mata Nui until the two of them fall into a pit of energised protodermis and are fused together into a being of light and shadow. This “Takutanuva”, temporarily dominated by Takanuva’s will, allows the Matoran, Toa and Turaga to pass through the gates below the island. He sacrifices himself, releasing Takanuva and seemingly destroying the Makuta once and for all.

The inhabitants of Mata Nui find that Makuta was hiding the entrance to another world from them. They see an ocean of silver water, and beyond that an island that the Turaga refer to as their home…

The first sets of the year, the Bohrok Kal were likely a disappointment for some fans because they were largely recolours of the Bohrok. They were the same price and parts count, but with their hands, shields, feet and visors recoloured into silver. They also featured new shield designs, most of which included sharper, more vicious-looking edges. I don’t remember minding myself so much: my dream was always to have an army of each type of Bohrok, led by one respective Kal. Still, I can understand the disappointment of others, but luckily there were far more sets released this year. 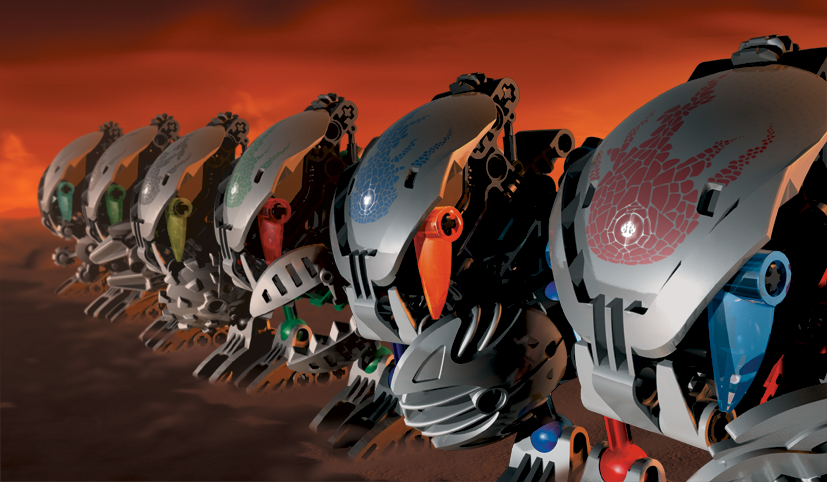 Makuta’s serpentine sons were very striking, unique looking creatures. At 45 pieces and $9.00/£5.99 each, they cut an imposing figure against a Toa, thanks to their arched, spiky backs, wicked staffs and glowing eyes (they didn’t actually glow, they just had a trans-orange hand element inside that always caught the light well).

Each Rahkshi was built with a gear function where if you twisted a knob on their back, their arms would spin from side to side, making them thrust their staff outward. Their spines could also open up to reveal a Kraata, a small slug like creature that was the essence of Makuta. 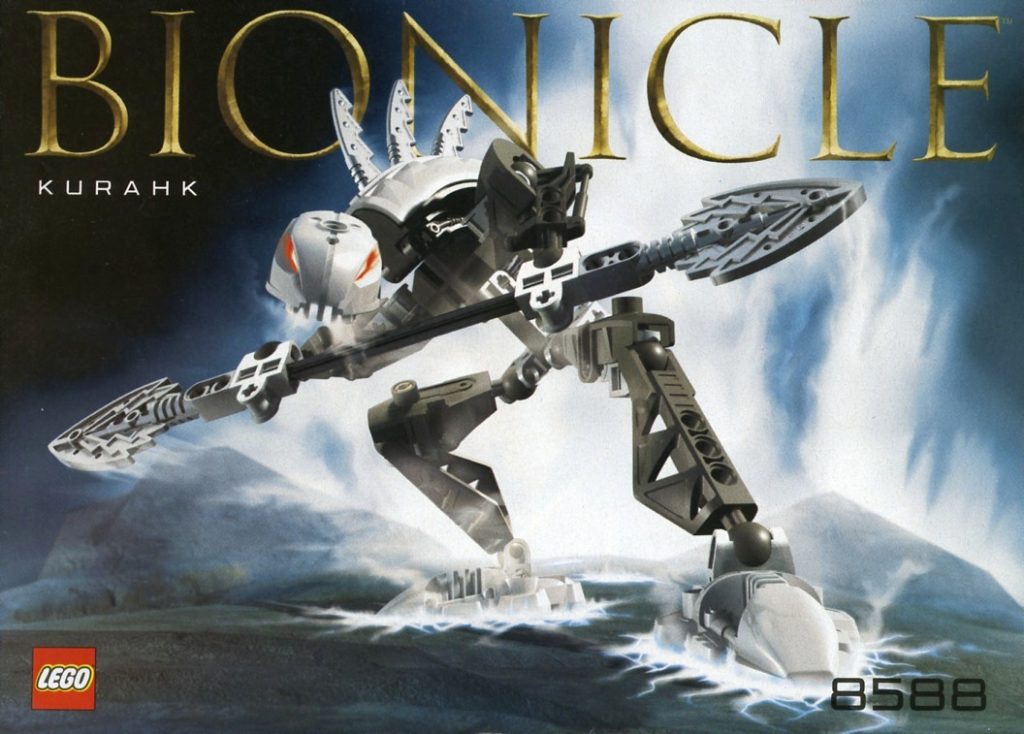 A seventh Rahkshi would actually be released years later and another 35 designs existed in story-only, which I suppose speaks to their popularity.

This year’s Matoran were larger, more intricate, and thankfully released worldwide. Though six sets were released, they only represented three villages: two water Matoran, two stone Matoran and two ice Matoran. They also had Kohlii staffs, and were intended as sports teams, another lovely element of the sets providing some world-building. Most wore recolours of masks from the Toa or Turaga (including a very nice dark orange Mask of Speed) and all had a gear function similar to the Rahkshi that let them swing their Kohlii staffs. At 25 pieces for $4.00/£1.99, they weren’t bad value either.

2003 saw four titan sets released: 8593 Makuta, 8596 Takanuva, 8594 Jaller & Gukko and 8595 Takua & Pewku. Seeing Makuta as a physical character was strange, as he had previously only been depicted as glowing eyes, swirling shadows, and a maelstrom of random BIONICLE elements, but his set made for an imposing villain, with powerful limbs and a creepy-looking reversible Mask of Shadows.

Takanuva was the star of the show for obvious reasons. He was the same build as the other Toa Nuva, but came with the Ussanui, a speeder bike designed for travelling through the caves under the island. It also came with a second version of the Mask of Light, a translucent, glittery variant meant to look as if its light powers had been activated. 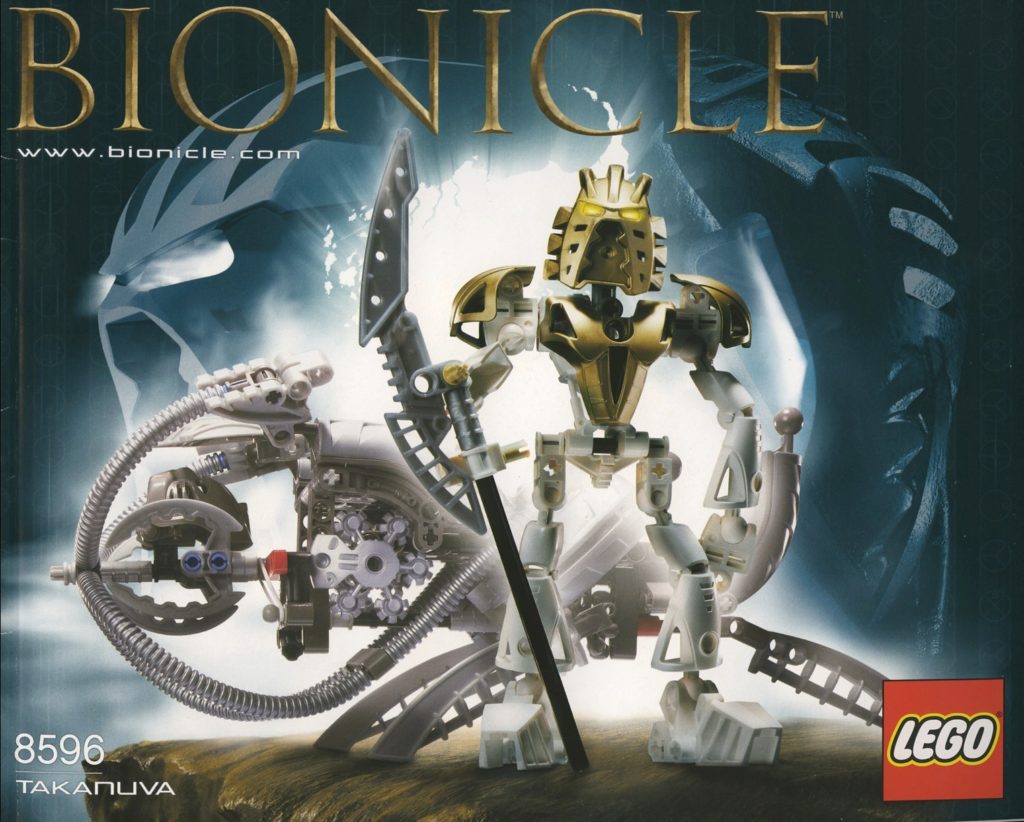 The last two titan sets are the Matoran protagonists of BIONICLE: Mask of Light riding friendly Rahi beasts. This meant that Matoran from four villages were actually released this year, since Takua and Jaller were both fire Matoran. The designs for the Rahi were fun: Pewku was a large crab whose legs would move if you pushed her along the ground, and the Gukko bird’s wings also moved. Plus: more dark orange pieces!

2003 had two blind bag/box LEGO BIONICLE sets of note. In 8599 Krana-Kal you could find the Bohrok Kal’s metallic Krana, recolours of the six Kanohi Nuva in the other Toa’s colours, and the very rare silver Kanohi Nuva (representing them after being drained of their elemental powers).

8580 Kraata was also released, in which you could get 3 of the 36 Kraata slugs that piloted the Rahkshi. They squidgy little things had six core designs and came in the colours of all 42 in-story Kraata, not just the six (later seven) released as sets.

2003 was an important year for LEGO BIONICLE, as its multimedia presence exploded. Where a few small Game Boy Advance games had been released previously, 2003 saw the release of BIONICLE: The Game. Released on several platforms, BIONICLE: The Game was a truncated version of the entire story from 2001 to 2003, and though you couldn’t play as every Toa, the level choices meant you got a pretty decent overview of the story so far.

The real point of note though was the franchise’s first of four direct-to-video movies – BIONICLE: Mask of Light. This was a moment that made many fans feel like their favourite theme was coming of age; LEGO animations and movies were all but unheard of back in 2003.

The movie showed the events of the second half of the year, from finding the Mask of Light onwards, and was mostly from the perspective of our favourite adventuring Ta-Matoran, Takua (the hero of the Mata Nui Online Game and previous GBA games). It knew its audience, wasting little time explaining any of the existing lore and jumping straight into the action (which probably made it hard for non-fans to get into). Though the character designs deviated a lot from the sets, it was received well by fans, and a second movie was set for release in 2004.

The books and comics continued as normal. This year actually saw two books released, BIONICLE Chronicles 3: Makuta’s Revenge and BIONICLE Chronicles 4: Tales of the Masks, mostly dealing with the invasion of the Bohrok Kal and the weeks after them leading up to the movie. A novelisation of the movie was also released, as well as comic issues 10 to 15.

End of the beginning

The door had seemingly closed on the first full story arc of BIONICLE, and 2004 would offer an even wider universe to explore. The franchise was moving forwards at full speed, but this first set of stories on the island of Mata Nui would be beloved by fans for years to come.

If you’re interested in exploring BIONICLE further, join me for an overview of 2004 coming soon! You can also read, watch and play the BIONICLE story for yourself over at Wall of History and Biomedia Project, or immerse yourself in the fan community that’s still active to this day over at BZPower.com, TTV, and the r/bioniclelego subreddit.

I hope you enjoyed this third retrospective of BIONICLE, and I look forward to seeing you again soon as we head back in time to the fall of the City of Legends…

LEGO Time Travel: Will it be possible in my lifetime?