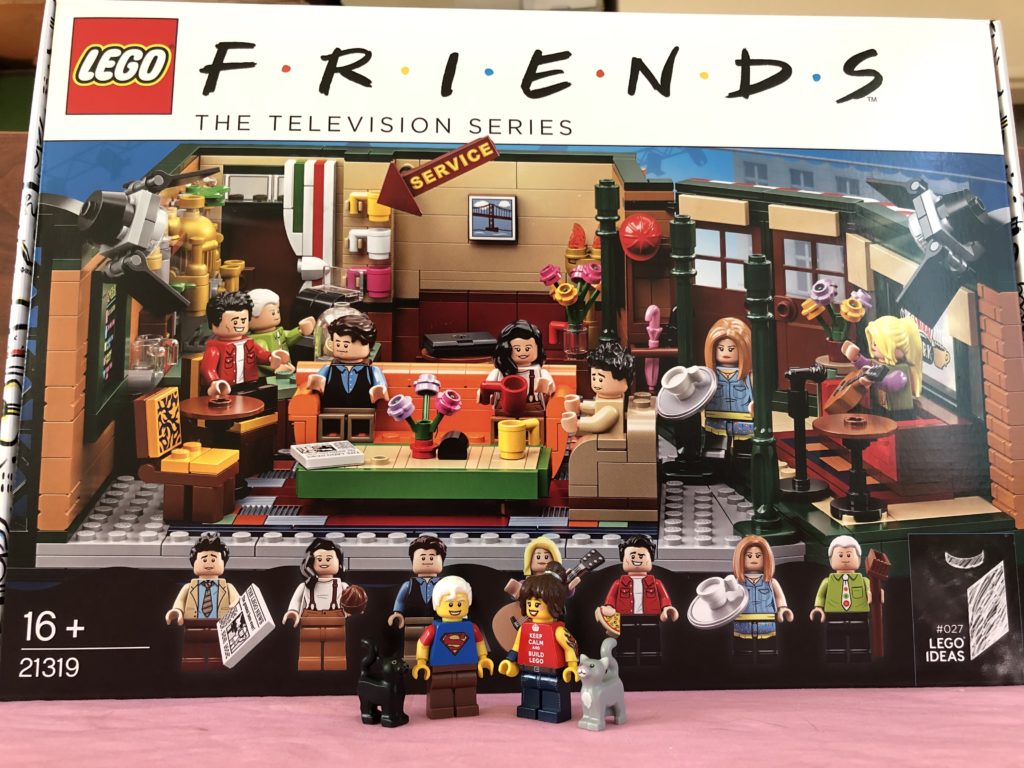 The One with All the Excitement

Halloween has come and passed. We all wore our costumes and ate our candies. As we take on the new month, we have already started to think about the wonderful Christmas surprises LEGO has in store for us, and how we are going to afford them. But before we get into the merry Christmas spirit, we’re going to take a look back to a set released just a few months ago: LEGO Friends Central Perk.

Let’s start with a story, shall we? Imagine a girl, who hasn’t heard of the popular TV series until its last season. Imagine her cousin (in other words, her sister), who is crazy about the series, telling her about it, and being shocked that she hasn’t seen it before. Now go back to the girl, and imagine her trying out a few episodes, loving it, and watching each and every season until she memorizes all of them.

Now add a few years (I don’t want to reveal how many, though people my age have already guessed). There have been an announcement, and boy, was she excited! It was the 25th anniversary of her all-time favorite TV show, and there was going to be a LEGO set! Wow! I mean, WOW!!

Praying it would come to her country, since many LEGO Ideas

sets didn’t, she started saving up. LEGO, after all, was an expensive toy. She counted the days until its release, and then…

The One with the Big Disappointment

When she saw the “Sold out” message in the online shop, she wasn’t disappointed at first. No. She knew that some stores put up the images of sets or figures before they were released, so she simply thought that was the case. She contacted the shop the next day, and that’s when she heard the news. The set has sold out the minute it arrived. There were no pre-orders taken, so the store probably didn’t have any idea how many people wanted it. They brought a few of them, and ordered more when they were sold out. Apparently, there was this huge list of people who were interested in buying, and they were going to be contacted on a first come first served basis.

And to this day, which is two months from when I first wrote to them, they still haven’t contacted me.

The One with the Apology

I sincerely apologize for what seems like rambling. It isn’t, though. I just want you to know how lucky you are, if you have a LEGO Store near you, or if you’re able to order online from LEGO. Or even from Bricklink, for that matter, and have that set delivered without having to wait for weeks, sometimes months, and without worrying whether it will get to you or not. A lot of us aren’t that lucky.

The One where She Finds a Solution

I found the LEGO Central Perk set by chance. It was sold by an individual, and about $30 more than its retail price. I asked around to see whether it was worth paying that much. Most said no, but as soon as they heard the story, they changed their answer. I knew it would be a looooong time if I waited for the store to contact me, if at all, and so I made up my mind and got it. After a few complications, I had my very own LEGO Central Perk in my hands. 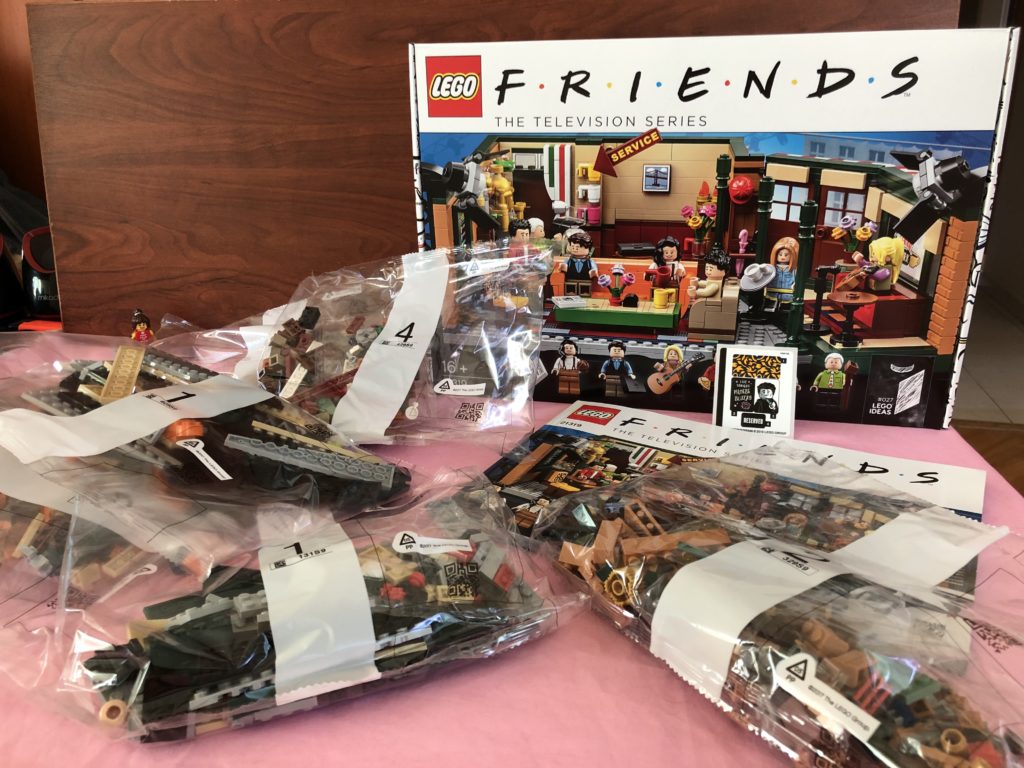 The One with the Review

Like many of you know, it has been two months since the set has been released. There have been so many reviews by now, and by people who is much better at this than I am. So this is going to be a little different than what you’re used to. And I promise I’ll try to ramble as little as possible from now on!

I read someone say that if you watch the series as you build the set, it’s much more fun. So I decided to listen to his advice, put on Season 5, and started building. My assistant (who also happens to be my dad), was familiar with the series, and wanted to accompany me as LEGO Central Perk came to life.

There are seven figures in the set, one representing each character, and of course, one for Gunther. Each of these characters join you as you open up the bags, with Ross and Phoebe coming out together. But the first bag introduces Gunther with his broom and his bright green shirt and polka dot tie.

You build the base at first. Even though building a non-rectangular base is interesting, there isn’t much excitement in it. However, if you managed to stay away from reviews of the set, the empty spaces do make you wonder… 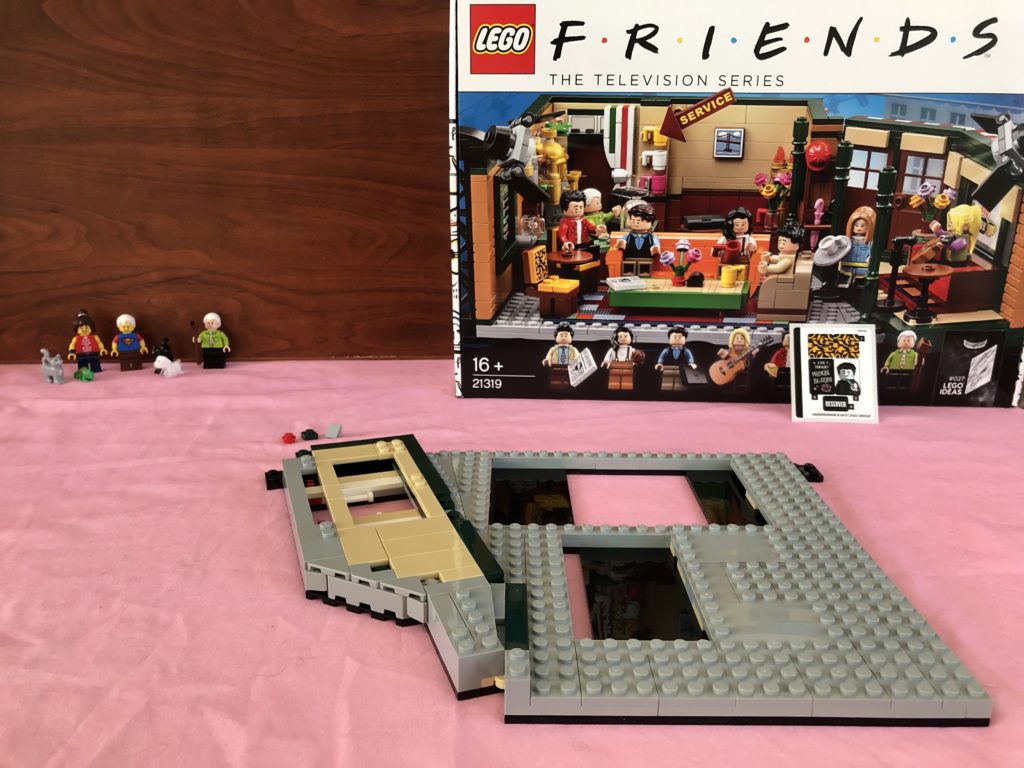 The second bag brings us Rachel, back when she was still working at Central Perk. She has her waitress outfit, and a tray with someone’s drink on it (which she probably got wrong). You build the wall behind the counter, with so many fun details like the radiator, the coffee machine, and the menu written in chalk. My personal favorite was the coffee filters under the coffee machine. 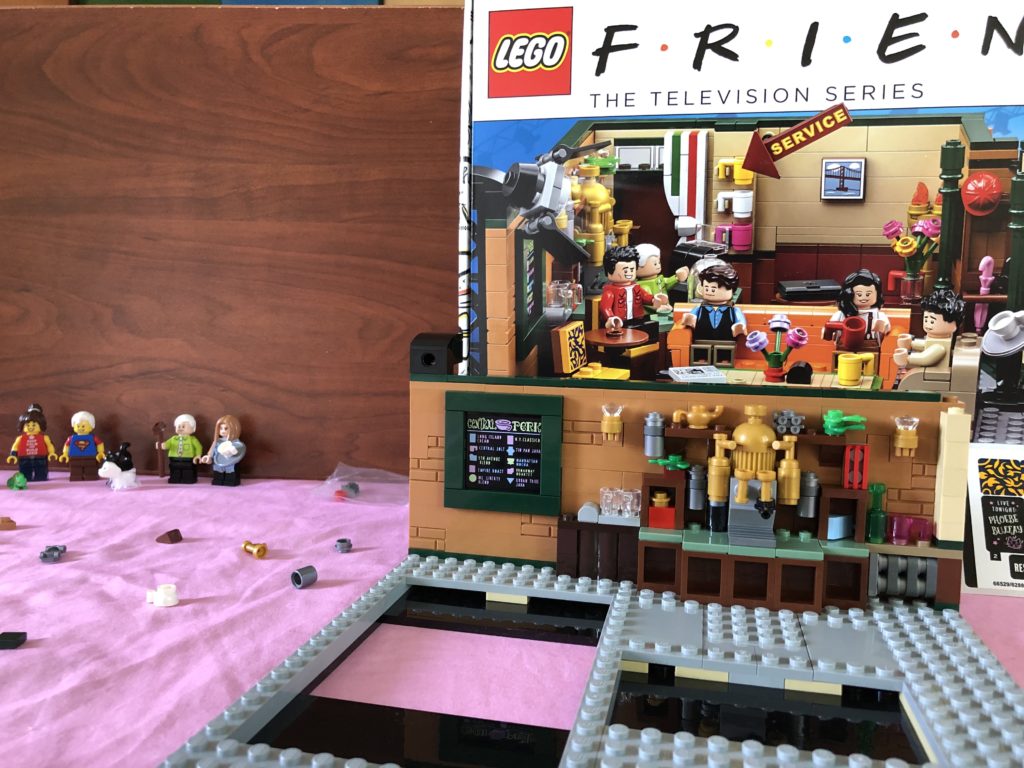 Joey joins us in the third bag as you build the adjoining wall. Of course he has his own pizza box and slice, with his oh-so-popular “man-bag”. And let’s not forget his “How you doin’!” expression. Now, I’ve been seeing face-twins of the minifigures included here and there, and even though I’m not sure if Joey has a face-twin, the expression is spot on.

As you build the wall, a few fun details come across your way, like a “Ichiban! Lipstick for men!” poster, or Phoebe’s concert announcement with a cat on it. If you’re a fan, let me ruin your day by saying “Smelly cat, smelly cat, what are they feeding you?”. Now you’ll sing it for the rest of the day. Sorry-not-sorry. 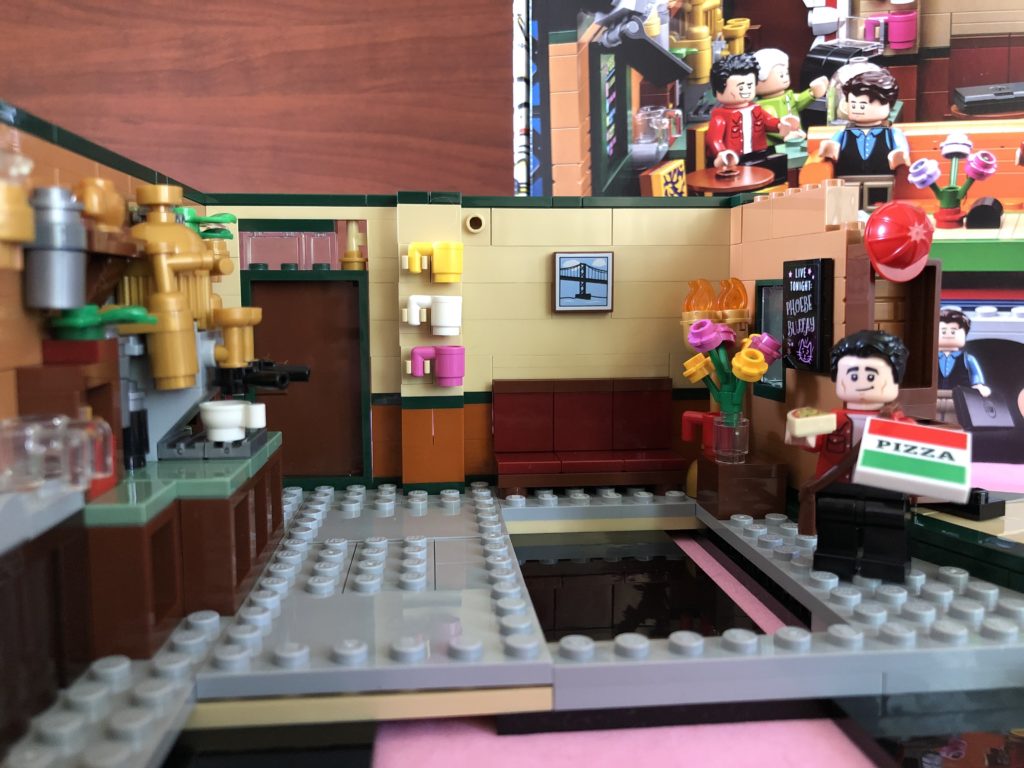 I have to admit that my favorite part of bag 3 were the flowers. Okay, so I haven’t been building large sets for a while and may have missed some cool details. Still, putting flowers on top of each other to make a big bouquet seemed pretty nice.

With bag 4, we get the guy who makes all the sarcastic comments: Chandler. And he comes with his own laptop, too! Now bag 4 isn’t as big as the previous bags, it just adds some details to the existing two walls we have like the counter, the cookie jar, and… OH. MY. GOD. Is that a curtain? And is it being held aside by that tooth/claw piece?? Ladies and gentlemen, I think I have found my favorite build of this bag! It’s followed very closely by that rug I just had to weave using small bricks and plates. Yes, you heard me. Weave. 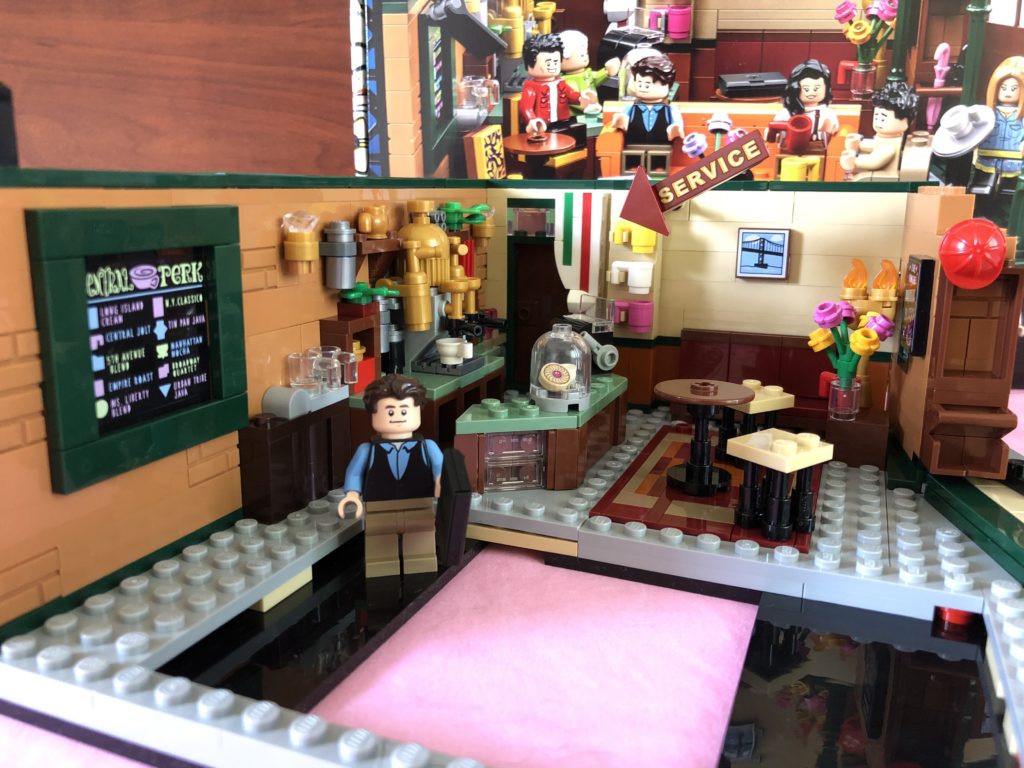 The fifth bag brings us the musicians: Phoebe and Ross! I mean, we all know Phoebe’s “side” job is singing, but Ross? Please, I don’t think my ears can take it any longer. Just stop playing that keyboard and go clean some fossils. Puh-lease!

We finish the remaining walls with this bag, along with the stage where, apparently, anyone can perform. There’s another rug like the one in bag 4, which you need to “weave”, under the stage area. My favorite part of this bag is the shop window with the Central Perk logo on it, and to my surprise, it’s not a sticker! 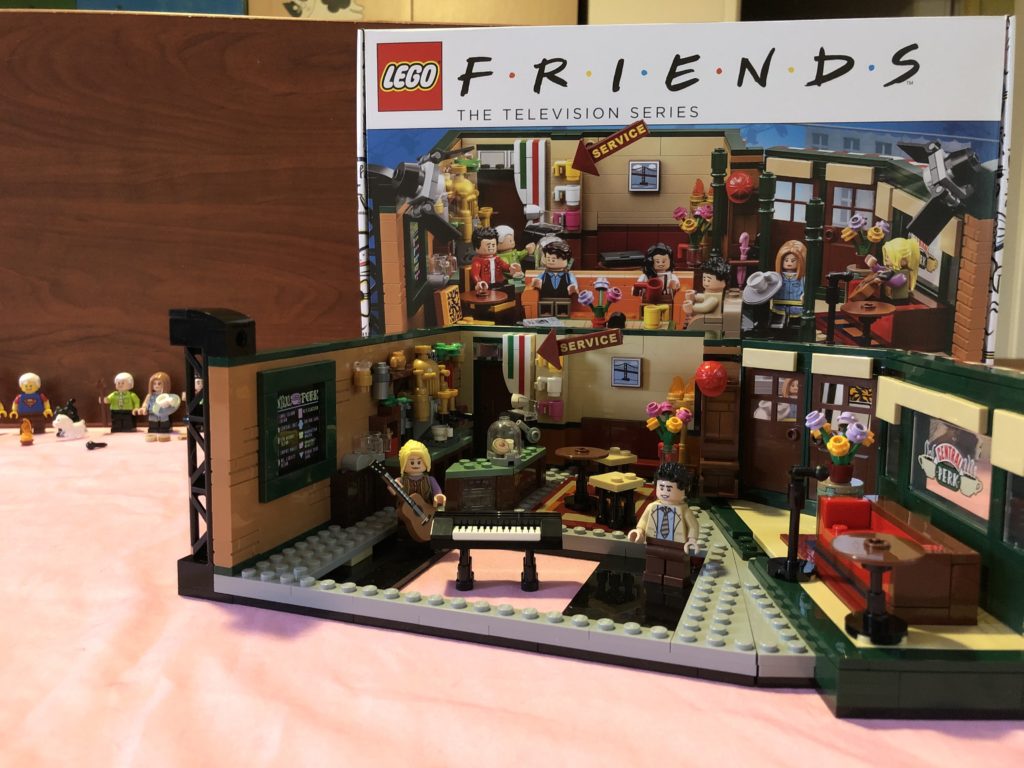 And finally, my favorite character comes out in the last bag: Monica. If you’re a fan of the show, I’m sure you’ve assimilated yourself with one of the characters as you watch the series. My friends and I have talked about the one we feel closest to, and as strange as it may seem, mine was Monica. I was never as posh as Rachel, and never as crazy as Phoebe. Besides, Monica was the only one who has been “overweight” during one period of her life, and even though I hate to admit, I have my own obsessions like she does – though not about cleaning. Whatever the reason, she was my favorite amongst the girls.

Anyway, enough about that. Bag 6 brings the best part of the set: The seating area. The rug below it is the biggest of all three. There’s a couch big enough to fit three minifigures, an armchair, and two regular chairs. Of course we have the big coffee table in the middle and a small one next to the chairs. Once you add the little accessories like the umbrellas and the coffee cups, along with the lights of the studio, you’re all set! 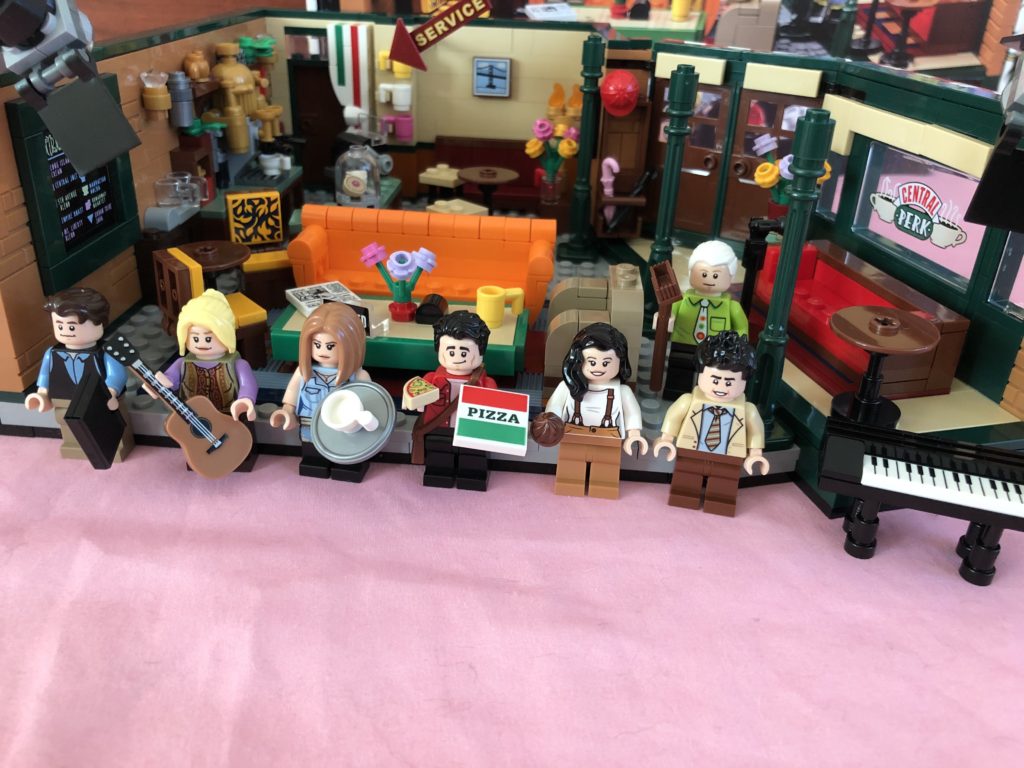 The One with the End Credits

It turned out the season I picked to watch as I was building was a pretty good one. Like all the others, it was full of silliness. I was surprised to see that even after all these years, they still managed to make me laugh. For a long time after watching Friends, I couldn’t watch any other comedy series. The jokes were just not funny enough. It wasn’t for lack of trying, either. Many of my friends recommended various TV series, starting with How I Met Your Mother and continuing with The Big Bang Theory. My apologies to everyone who is a fan of those, but everyone has their own taste, right?

To go back to the empty spaces I mentioned earlier… It turned out that parts of the set, the ones with rugs under it, can be taken out to be played with separately. The staging area may be a little harder to take out, since it “clicks” when you put it in its place, but the main seating area and the bar stools with the small table behind it do easily come out. I see this as a huge plus since I already have some possible scenarios where I can use them. 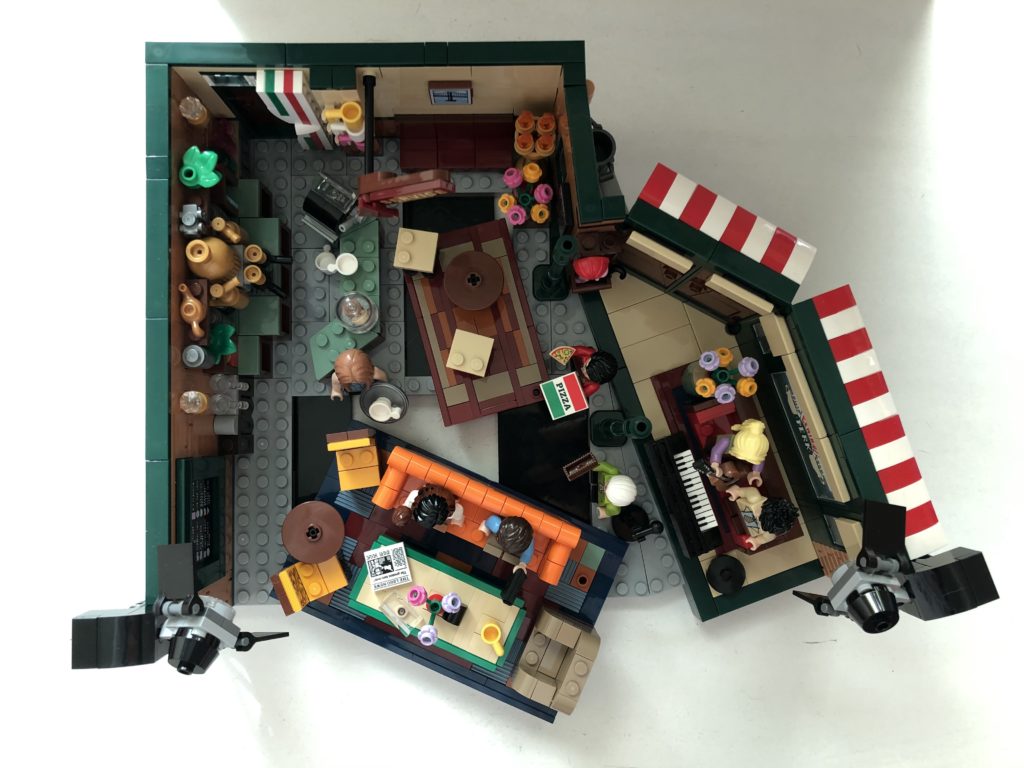 I have to admit that some of the building techniques were pretty interesting. You start building a part, and at first it doesn’t make any sense at all. It’s hard to guess what it might turn into. After you finish it, you realize you’ve been building it sideways! As soon as you turn it 90 degrees, a light bulb appears and now you know what you have built! Okay, so I may have been out of the game for a while, but no matter what, seeing a different building technique always amazes me.

I don’t know the exact name of the technique used to build the rugs and various other parts. I’m tempted to say SNOT, but it’s not exactly that. Whatever it’s called, having a smooth area like a tile along with studs to put minifigures or furniture on them is really cool and useful. I’ll have to remember that if I ever build a MOC. 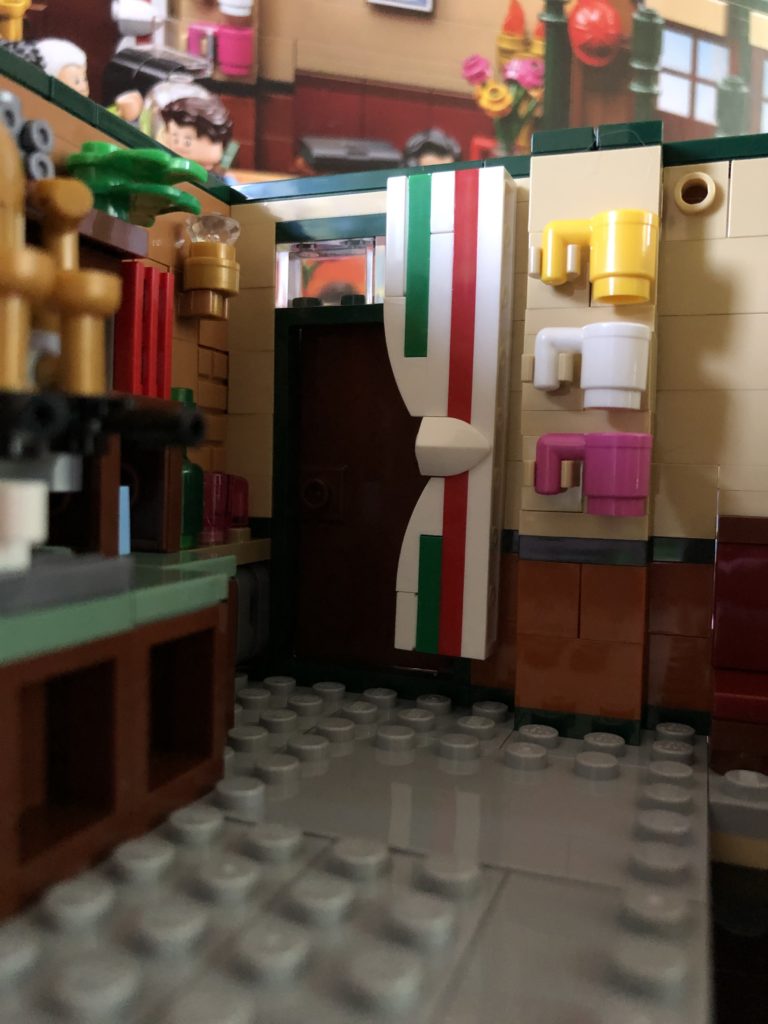 Overall, I really enjoyed building the set, even though it opened up a huge hole in my wallet. Watching the series as I build turned out to be a good call, too. The characters, the details, the building techniques… no, I’m definitely not sorry that I got it, despite all the difficulties. LEGO Central Perk is worth its price, and such a fun build.

Did you have a chance to get the set? Let me know what you thought of it in the comments!