In a year of desperate times, desperate measures, and desperate people (yes, you), LEGO still continues to bring joy to our hearts by keeping up with the tradition of Collectable Minifigures. As some may already know, there are a reduced number of figures in LEGO CMF 21, down to 12 from the usual 16, but there is still plenty to talk about! Let’s take a look at these new figures, both as a whole, and what their individual parts can mean for custom builds. The names listed will be based on data from Brickset.

The Paddle Surfer is very similar in concept to many surfboarder figures we’ve gotten in the past, but this one has a far more unique print design. Swim shorts instead of full black legs and a colorful top over the swimsuit makes for a more modest and modern look for the average ocean enjoyer. The hair/hat combo piece is nothing new, but the color combination and unique print are certainly desirable. The dolphin animal is also quite desirable, and is usually only found in rare and expensive sets, and I believe the sand blue is a new color for it.

The Cabaret Singer is certainly an interesting addition to the LEGO CMF 21 figures lineup. The headdress is immediately eye-catching, and so far is unique to this figure alone. The colors on all the parts of the figure are primarily purple and teal, both of which are rarely seen on figures. The long skirt piece I believe is also new, and I am willing to bet that it has some sparkly details to complete the look! 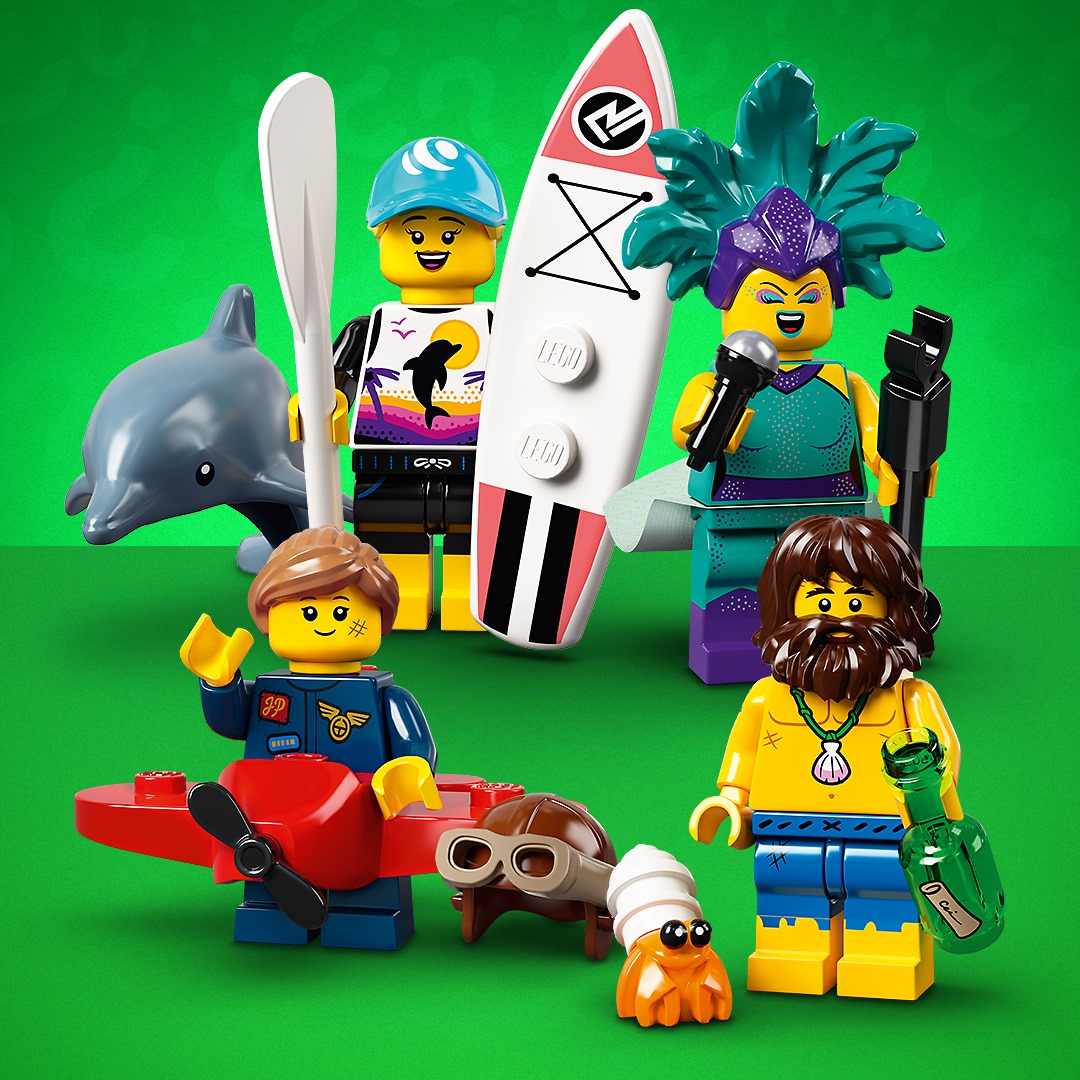 The Airplane Girl is very reminiscent of the Space Fan from the previous series, showing equal dedication to the profession. The airplane costume is new for this series, and it is unique enough that this may be the only time to find it. It features no printing, which may be a benefit to some custom designers, instead having studs on the wings for easy adding of parts. The flight helmet is the same that has been around for decades, and the hair is also one we’ve seen before, the only other exclusive parts being the face and torso prints.

The Shipwreck Survivor is also certainly an interesting addition, at least on concept alone. The beard/hair combo has been used since Series 1 if I recall, but this figure does feature a new and unique hermit crab piece, with a stud and decorative piece on top to make its shell. This figure is generic enough that he and his parts can be used for other purposes, such as a surfer dude, beach hermit, or urban shaman.

The Centaur Warrior is the latest addition in the lineup of fantasy figures, and this one is certainly a keeper! The centaur body is the same as seen used for the centaurs from the Harry Potter line this year, but in a much brighter and friendlier shade of color. The torso print is reminiscent of the Rogue from Series 16, and also includes a bow and arrow and quiver, along with an apple for target practice.

The Beekeeper is a simple yet handy figure, with a new dual-molded mask piece. The smoker is a gray mug with a gray action pose piece, first used in the DC Superheroes CMF line.  Also includes a printed tile of honey comb, which is easily possible to make a full farm if desired. 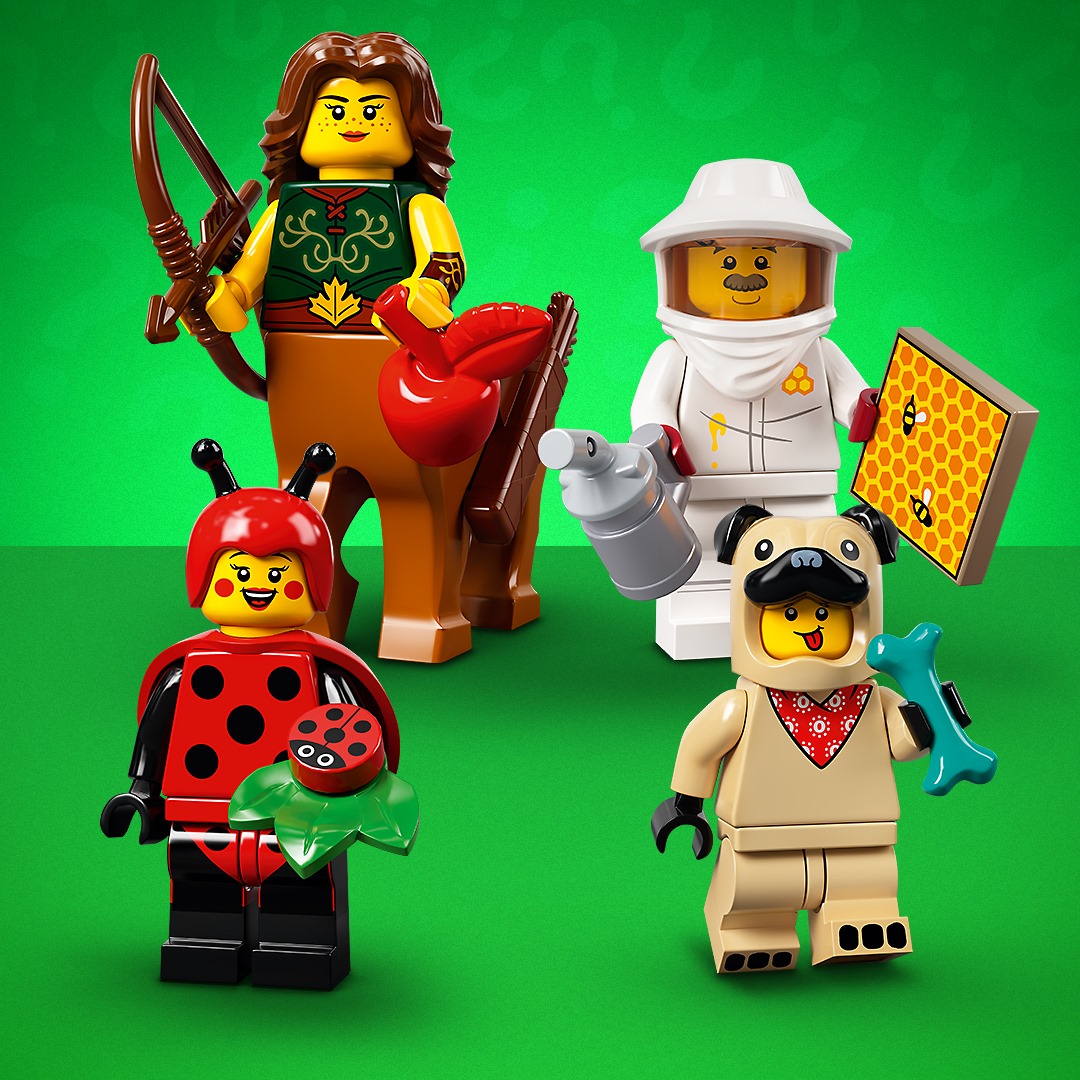 The Ladybird Girl is a bright and colorful figure, with an equally adorable exclusive tile print. The headwear mold has been seen before, but the shell on the back I’m pretty sure is new. While the figure may not be useful for a variety of scenarios, I’m sure one can immediately see the possibility of a Miraculous Ladybug Custom Figure (Get on it, FireStar Customs!).

The Pug Costume Guy continues the tradition of “___ Costume Guy/Girl” with a much more familiar and friendly take on the idea. This minifigure sports medium sized legs with prints, a unique headgear piece, and a bone in teal to signify it as a chew toy. The red bandana adds some much needed contrast to the plain torso color.

The Ancient Warrior in the LEGO CMF series 21 once more adds to the line of, well, ancient warriors seen in the series’ past. Sporting a printed shield and unique wood and obsidian weapon, any figure like this can easily strike fear in its opponents. The helmet is a new mold with lots of prints, and lots of other fine details in the printing on this figure is seen throughout the head, torso, and legs. 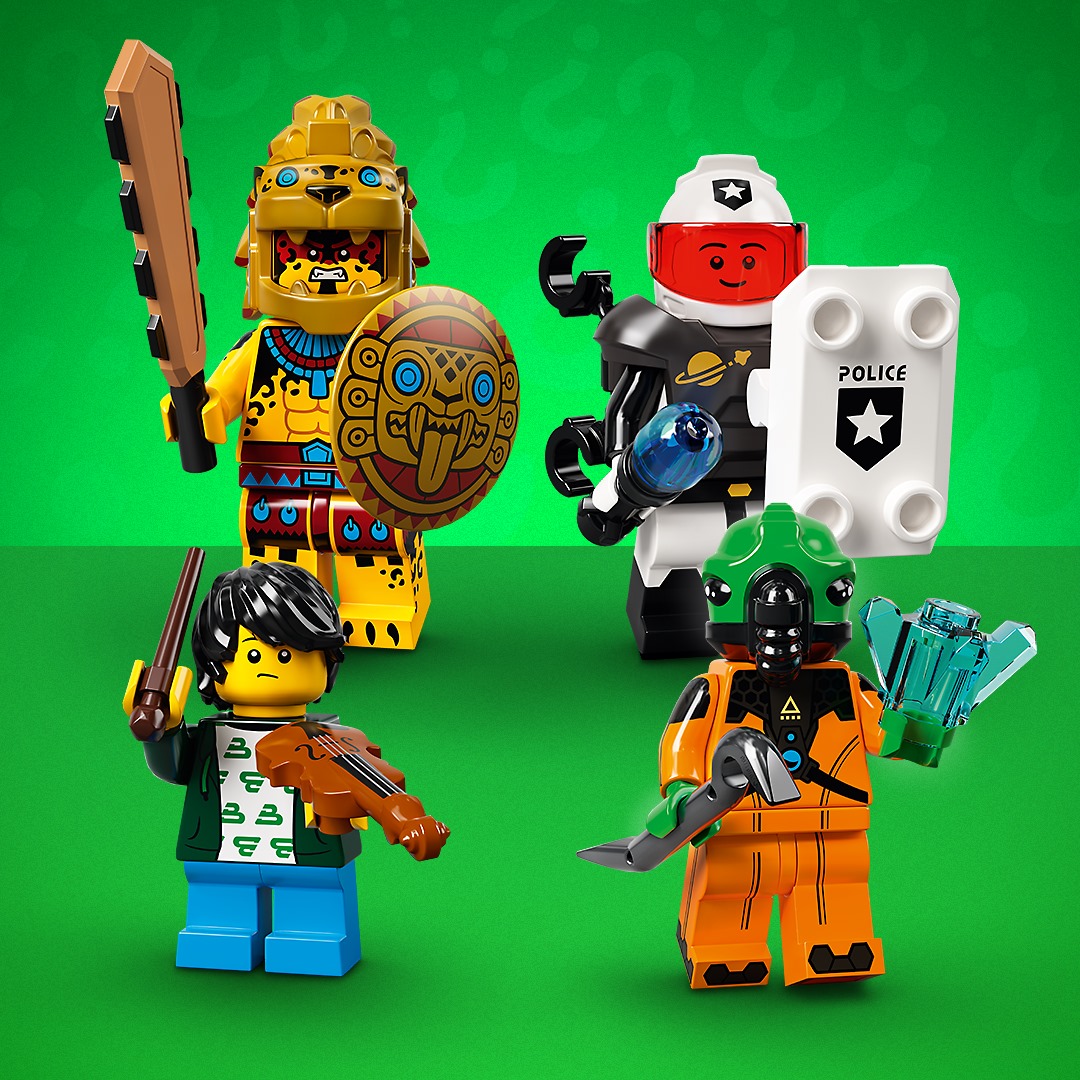 The Violin Kid is the most generic figure of the bunch, but features arguably the best accessory. The new violin piece can be used for a variety of characters, as can the parts of this figure, still sporting the old short legs in azure, and with a new print for the torso and face.

The Alien (very creative name, LEGO), is the obvious foil to the Space Police Guy with its prison jumpsuit design, and it is certainly a unique head mold unlike some we’ve seen in recent years, reminding me almost of the Mars Mission alien figures. He sports a blue crystal and a gunmetal (most likely) crowbar to either secure the crystal or possibly an escape vehicle.

this way, it still seems so strange to see so few figures in a series. We also now possibly see the end of the tradition of Food Costume minifigures, which while they were never anyone’s most desirable figure, they were still a fun stable to the theme. The Centaur Warrior is the obvious standout, but I’m not sure if she alone can save this series from its lack of figure choices in my opinion. Of these minifigures from LEGO CMF 21 series, my favorite is the Centaur Warrior, with Space Police Guy being a close second, and the Ladybug Girl and Pug Costume Guy being my least favorite.