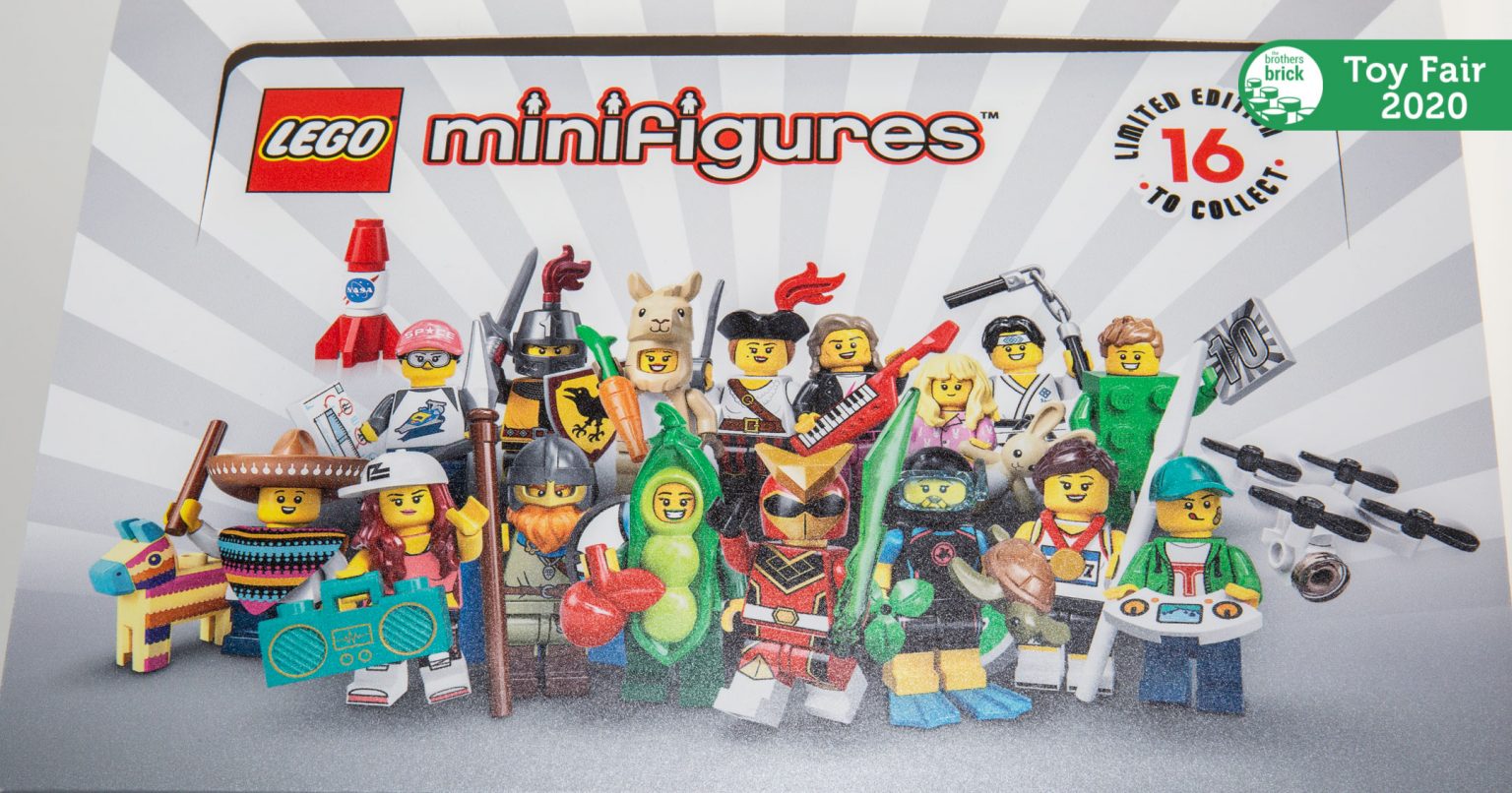 Last weekend was pretty eventful for people like us, for it was the time for the New York Toy Fair. And of course, it was the place where new LEGO goodies were announced. There were so many of them, from the Mandalorian to Spiderman sets, from Minions to DOTS, from books to apparel. However, today I’ll be talking about the upcoming collectible minifigures set, which will be available starting April 19th, 2020. It’s been 10 years since the first CMF series released, and these will be the 20th collectible minifigure series, if you don’t count the licensed and sports series. Ladies and gentlemen, I give you the LEGO Collectible Minifigure Series 20!

Before I start, I’d like to thank The Brothers Brick for the images. As you can see, all of the images I used are borrowed from them.

Like with all the other unlicensed CMFs, this one, too comes with 16 minifigures. Well, like most of them, anyway. I’m sure many of us are still sore about not being able to get Mr. Gold from CMF series 10. The good news, is, there’s no Mrs. Gold included in this series. At least not yet. If LEGO decides to surprise everyone at the last minute… well, it will be a disappointment for many. Again.

What was I saying? Right, 16 minifigures. The names I’ll be using here are borrowed from Brothers Brick, too, and they may or may not be the finalized official names.

First, we have the 10th Anniversary Brick Suit Guy, holding a 2×2 tile with 10 printed on it. I think it’s a nice addition to the Brick Suit minifigures from the 40th birthday of the minifigure series, a.k.a. CMF 18. Now we have red, green and blue brick suits, and can finally make some computer jokes using them! 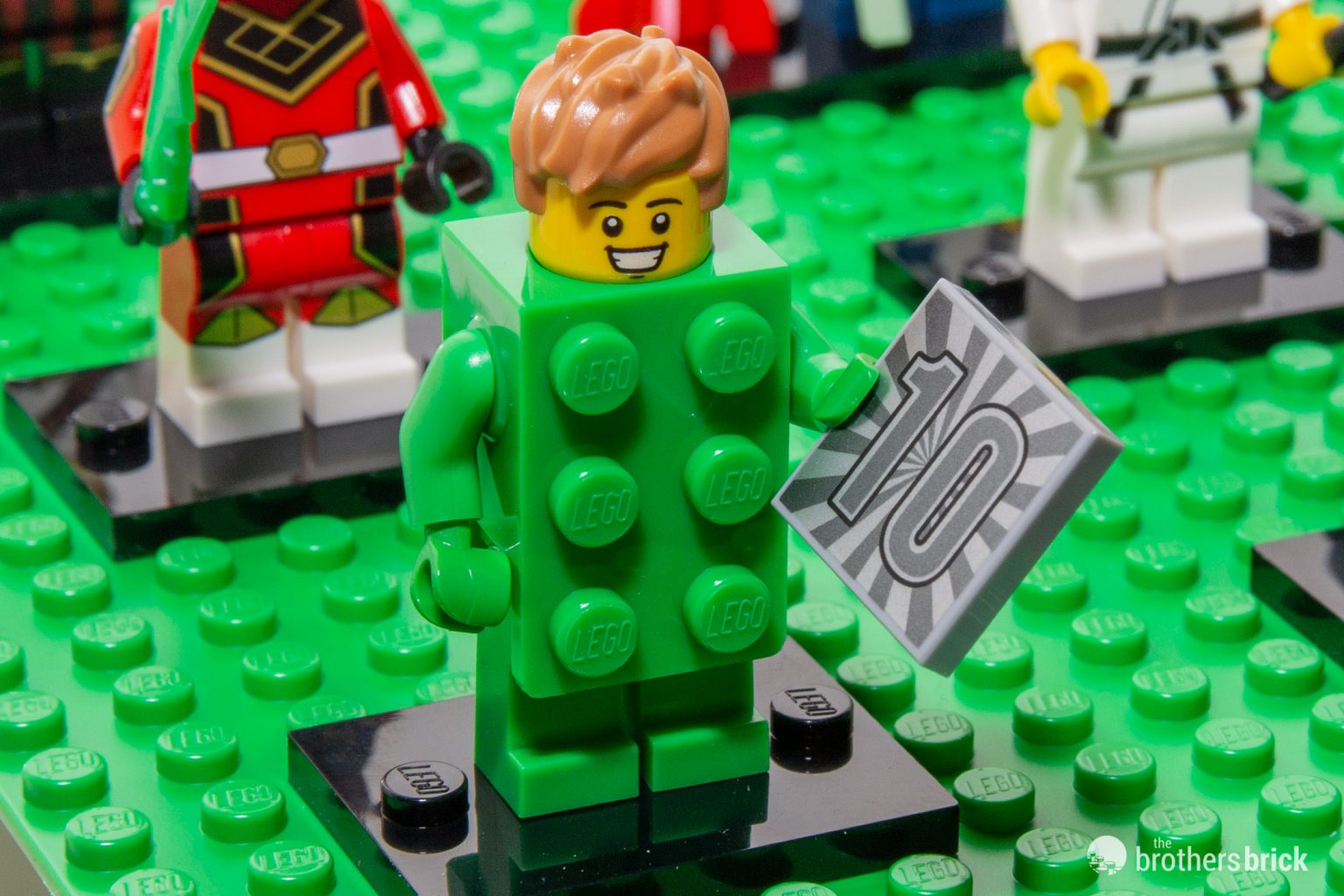 I’m not sure about the facial expression, but the hairpiece seems to be brand new. Also, I’m dying to know who he represents. Maybe the designer who came up with the CMF series… Any thoughts?

Next, we have Hip Hop Dancer Girl with boombox. From the looks of it, she’s wearing a coral colored shirt. I, for one, am very happy more and more LEGO minifigures appear with that color, since it’s one of my favorites. 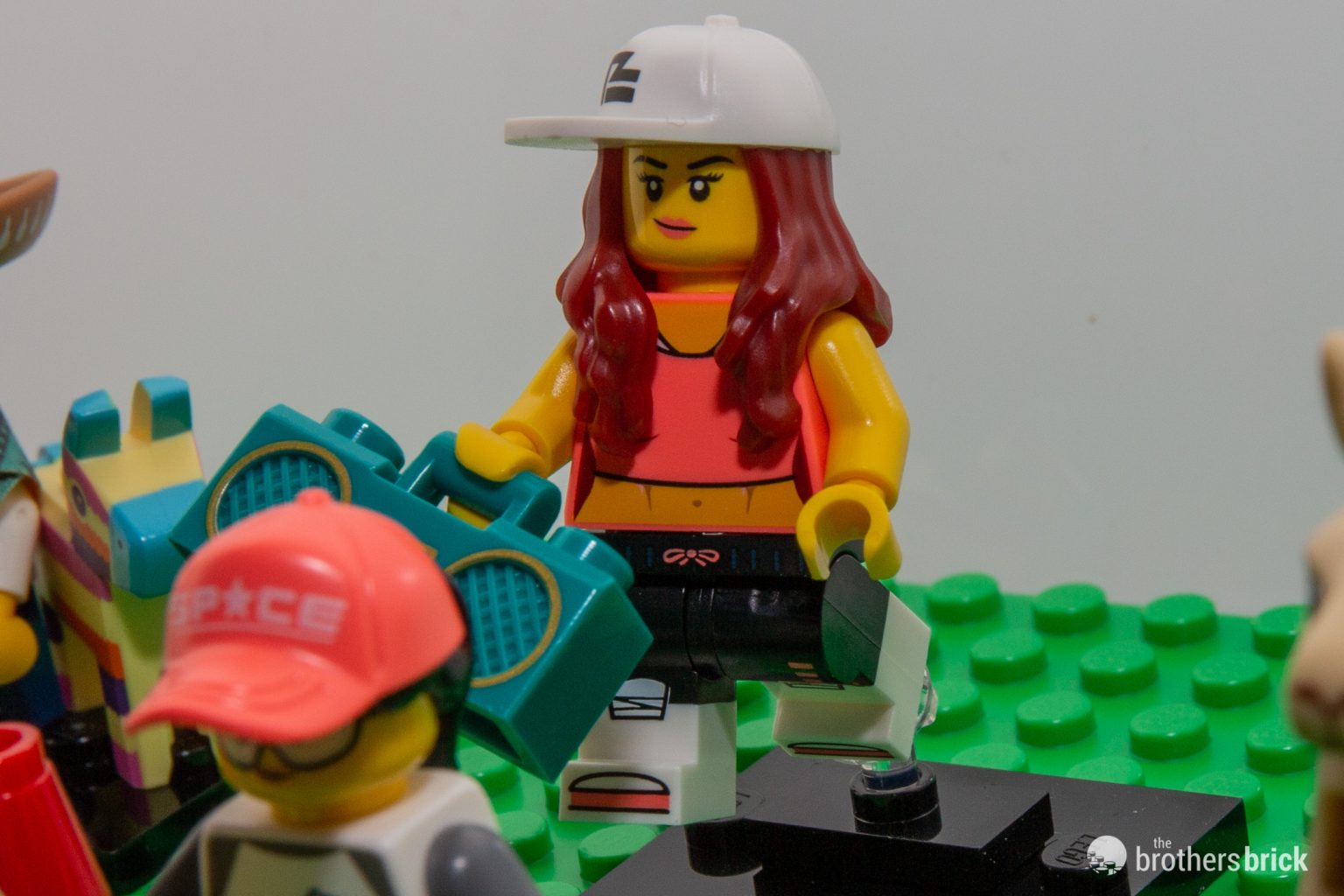 I’m also glad to see more hair-hat combinations being made. This feels brand new, too. Her facial expression doesn’t seem new, but maybe just the lipstick? It’s hard to say from the picture. Either way, it’s a cool minifigure. And having a turquoise boombox wouldn’t hurt, either. She even has one of those transparent thingies from the DC CMF series, to show off her dance moves!

Next, we have one of my favorites: Pea Costume Girl. I’m guessing the apple she’s holding is a reference to the peas and apple salad, which can also be seen on her shirt when her costume is taken out. Ok, I admit I cheated, I checked other websites and found her without her costume on the Zusammen Gebaut page. On second thought… I’m pretty sure it’s called research and not cheating… right? 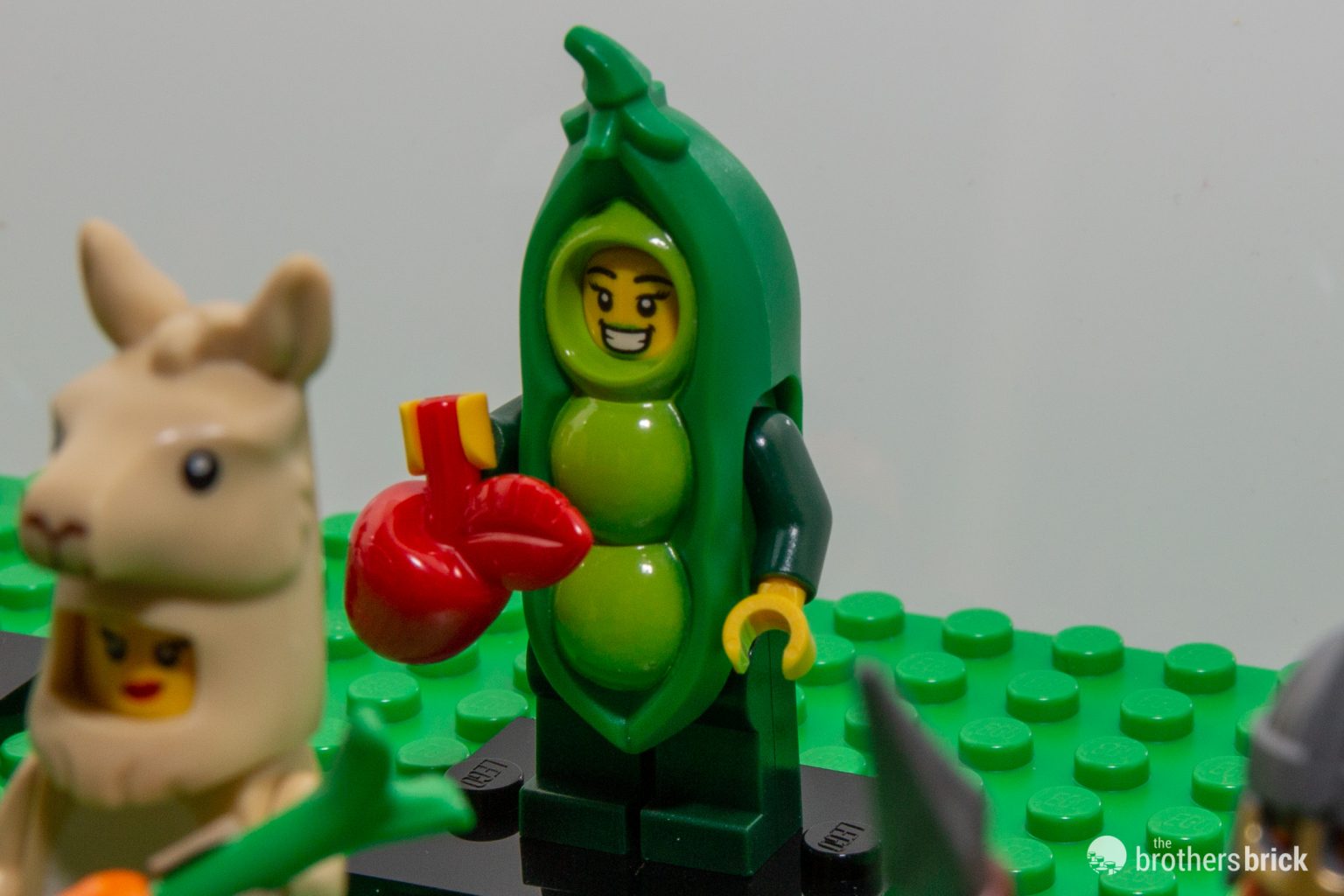 So, we have a Pea Costume Girl ready to make a salad and who’s very happy about it!

The next one on the list is a Knight with his sword and shield. I’m a bit disappointed by this figure. None of the accessories are new, and I can’t see his face from the images. However, the bird on the shield reminds me of the Black Falcons from way back when, so I’ll let it slide this time. 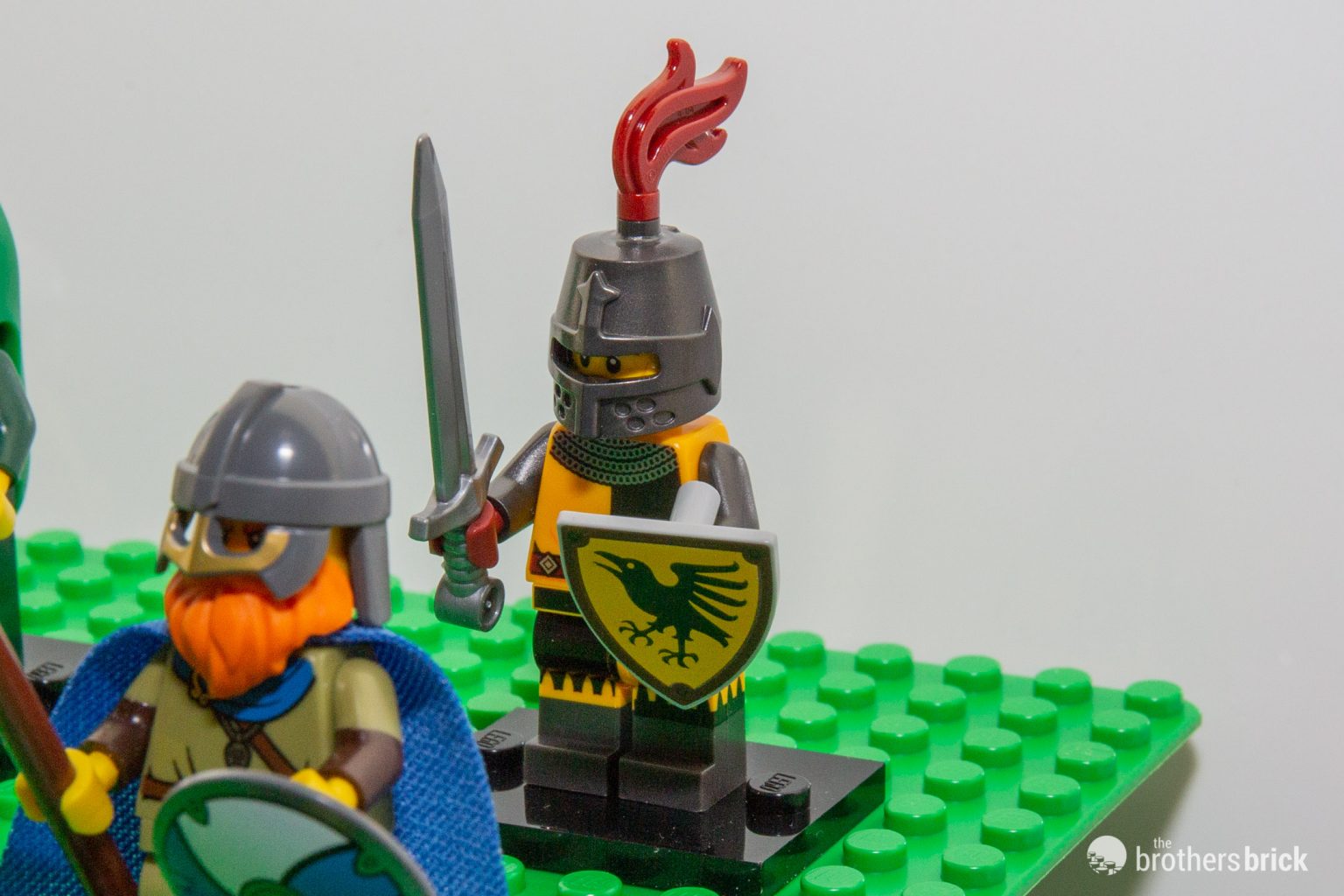 It’s been a while since we got a pirate in the CMF series, so the Pirate Girl with her cutlass is a welcome change. She seems to have the same hair-hat combination I talked about earlier, and her expression seems to be spot on for a pirate – not to mention her beauty mark. I would’ve added a parrot, too, but it can always be added later, right? 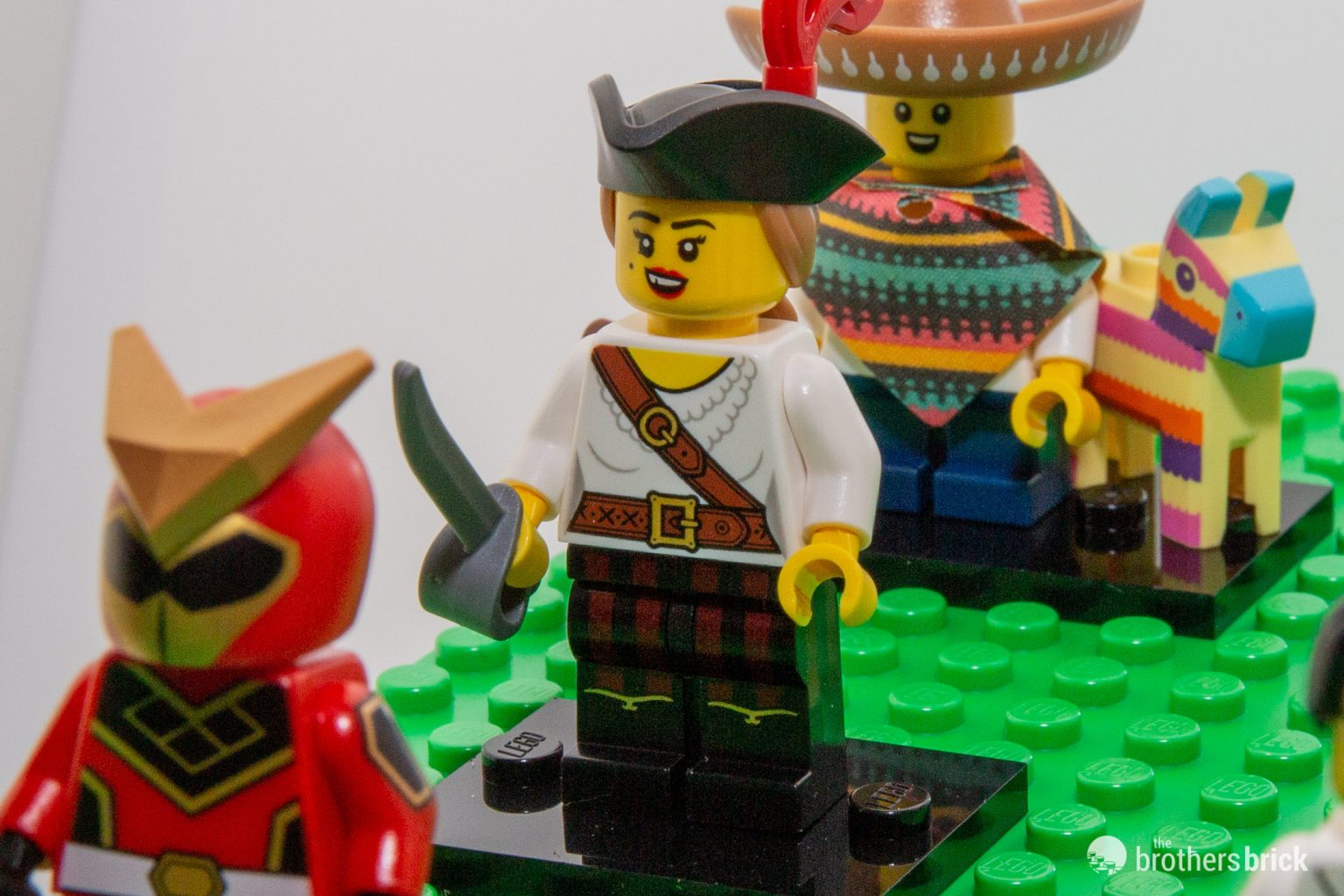 The Rocket Girl can be the little Rocket Boy’s older sister. Who knows, maybe the love of space does flow through their whole family. She, too, has a hair-hat combined piece. It looks like the one the Ice Cream Vendor wears, from the People Pack Fun Fair set, as well as the one the Dog Sitter has, from the previous CMF series. The colors, however, are different, and if I’m not mistaken, we have a coral colored cap! Yaay!

The little rocket, the rocket blueprint, and the printing on her torso and legs do make her a very cool minifigure to have. After all, who doesn’t love Classic Space?

Ladies and gentlemen, this is my most favorite of the bunch: Llama Costume Girl. I admit, I’m a sucker for animal costumed minifigures. They look really cute, and this one is no different. She may not have detailed printing or significant accessories, but the head mould itself is definitely worth having! 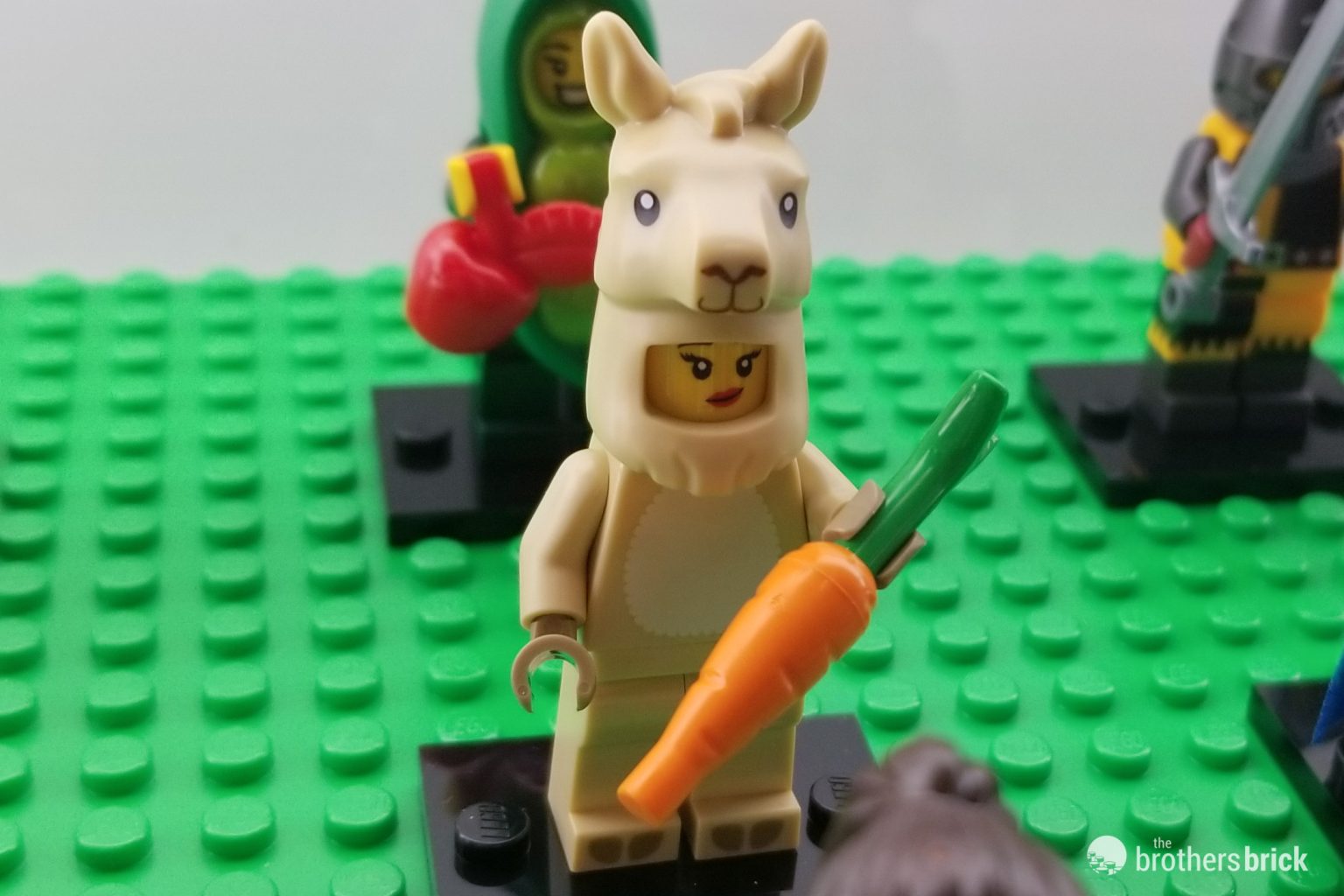 The next one doesn’t excite me much, either: Viking. Don’t get me wrong, I like Vikings, I even have both the male and the female Vikings LEGO released in the earlier CMFs. However, this one feels more like a peasant with a cape from a Castle theme than a Viking. Of course, I can’t see every little detail from the picture, but it’s a feeling. Still, the helmet looks pretty cool, and the beard does say Viking. 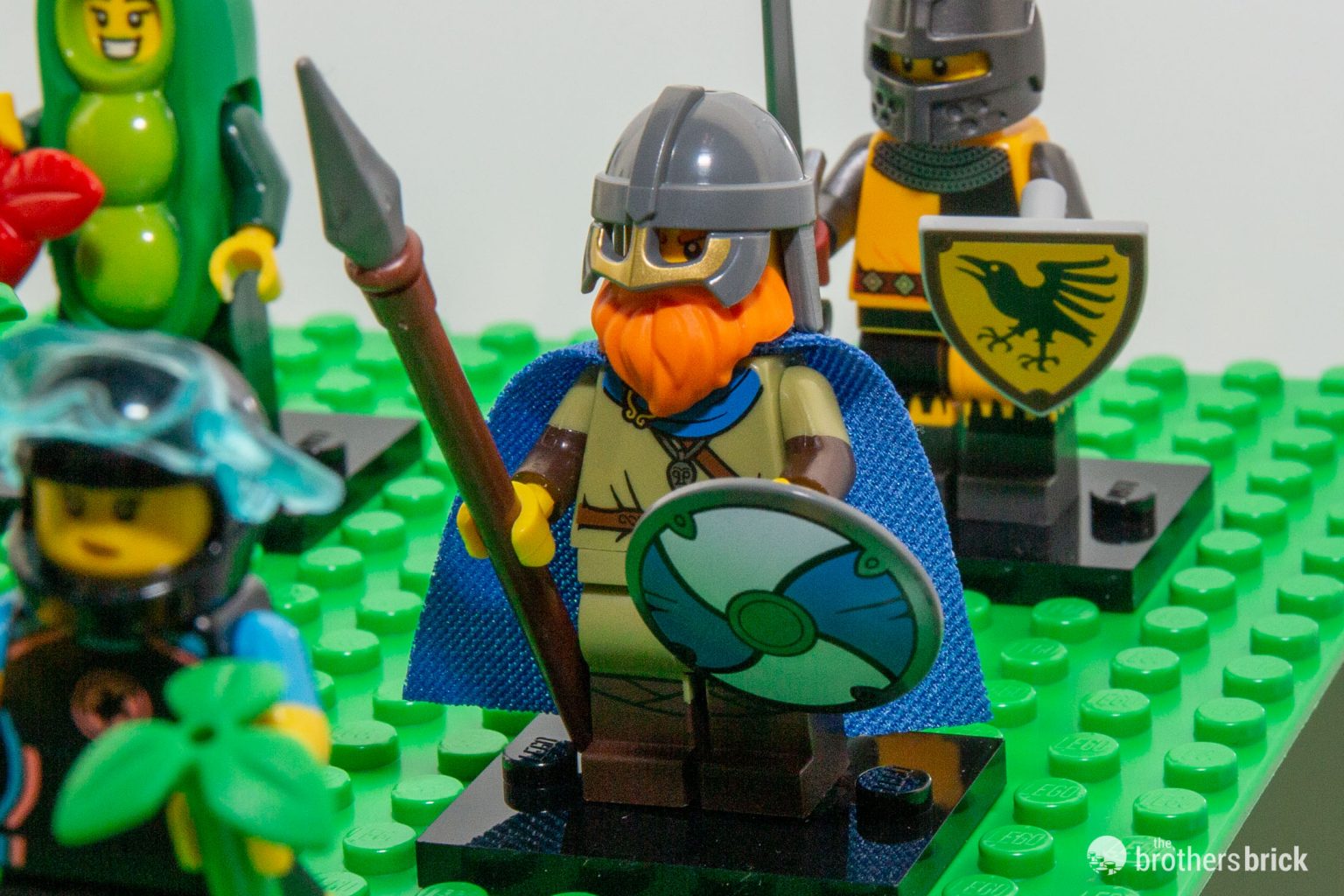 The next one on the list is Fortnite Boy! Oops, sorry, my bad, it’s Piñata Boy with a piñata donkey. Aren’t they cute? He even has a little stick to hit it! Hmm, I wonder what comes out of a piñata made of LEGO when it explodes… candy, or 1×1 round plates? 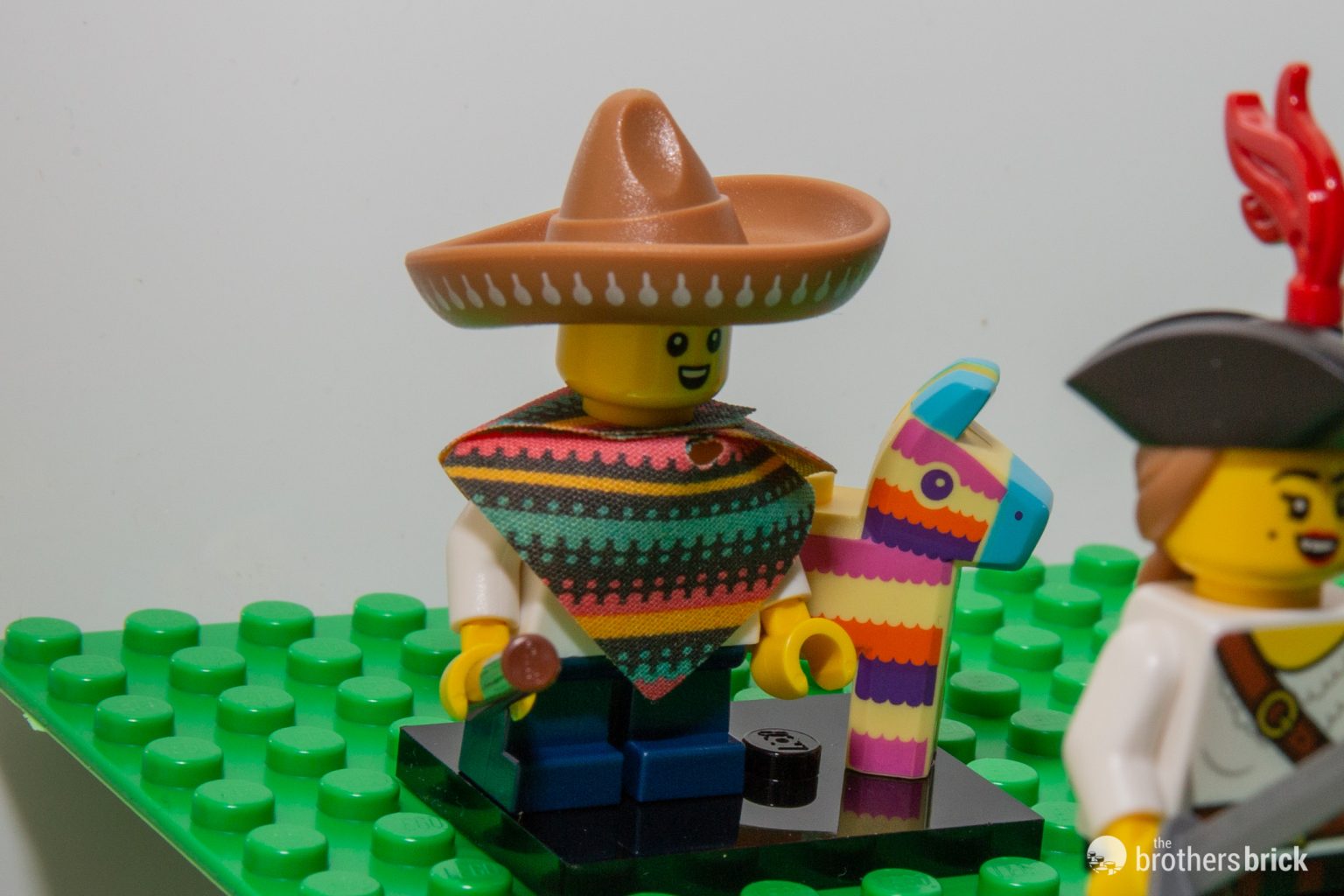 If I’m not mistaken, we’re adding a brand-new color to our sombrero collection, so that’s a plus. The donkey is indeed very cute, and I’m sure LEGO will find other ways to use it in future sets. This couple will be a nice addition to our collections, I think.

Ladies and gentlemen, we have yet another Rock Star! And this time, he has a brand-new instrument, a… key… tar? Ok, haven’t heard that word before, but it makes sense. I mean, what else do you call something that’s a mixture of a keyboard and a guitar, right? 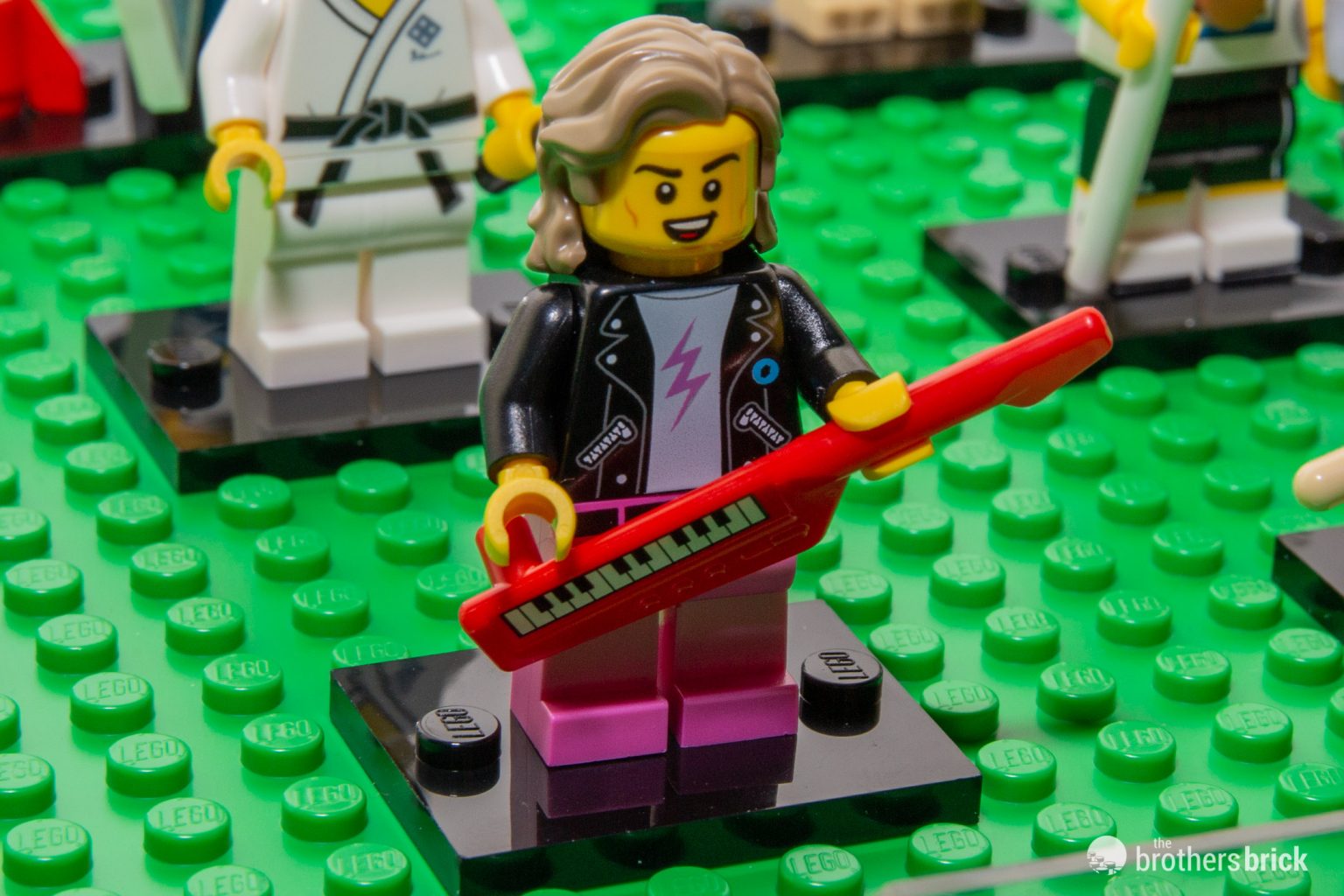 The Rock Star has Luke Skywalker’s hair, and in the same color, too, I believe. Now I may not know a lot about rock stars, but his overall vibe tells me he’s not from our time, but maybe 80s or something? Whenever he’s from, he looks very cool. While his hair covers the top of his jacket, the bottom reads “tour”, so no doubt he’s very famous in certain circles!

Now, this next figure is also a favorite of mine, but mainly because of her accessory. Her temporary name is Sleepy Girl, and she has a rabbit!! I don’t know if it’s a pet, or a plush toy, but honestly, who cares?! After the oh-so-many different colors and types of teddy bears, we now have another tiny to obsess over! 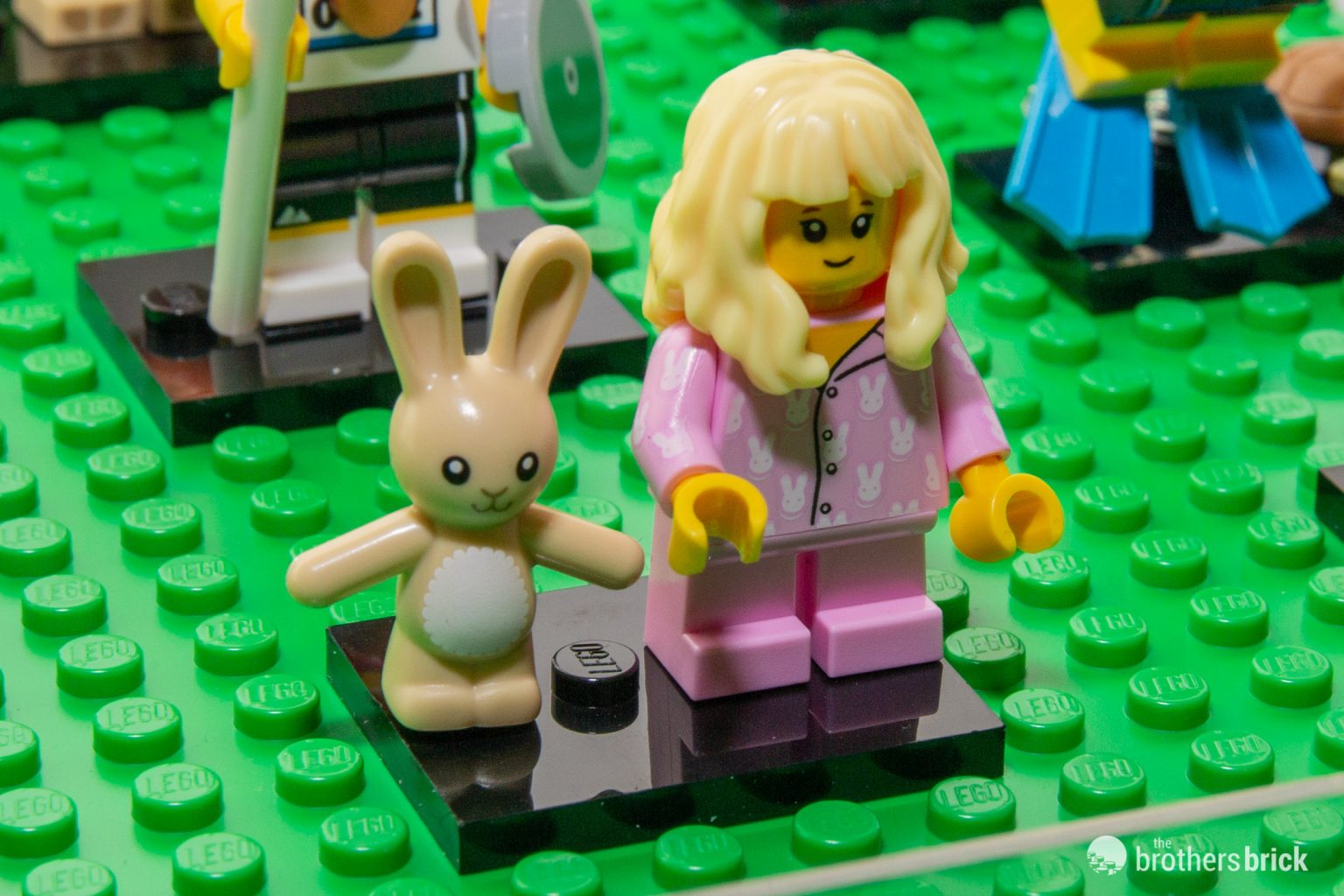 Her hair is the first time we’re having this model in blonde. It first appeared in Hermione, and the only other character who had that hair is Joyce from Stranger Things. Since now, it has only been made in reddish brown.

Next, we have a Drone Pilot, who seems to have been hit by his drone a few times. His expression is spot on for someone who has been struggling to keep his drone in the air. While the mould of his cap isn’t new, I believe its color is! I have to admit, I really enjoy seeing old (or newish) parts appear in different colors. It provides a nice variety in minifigures. 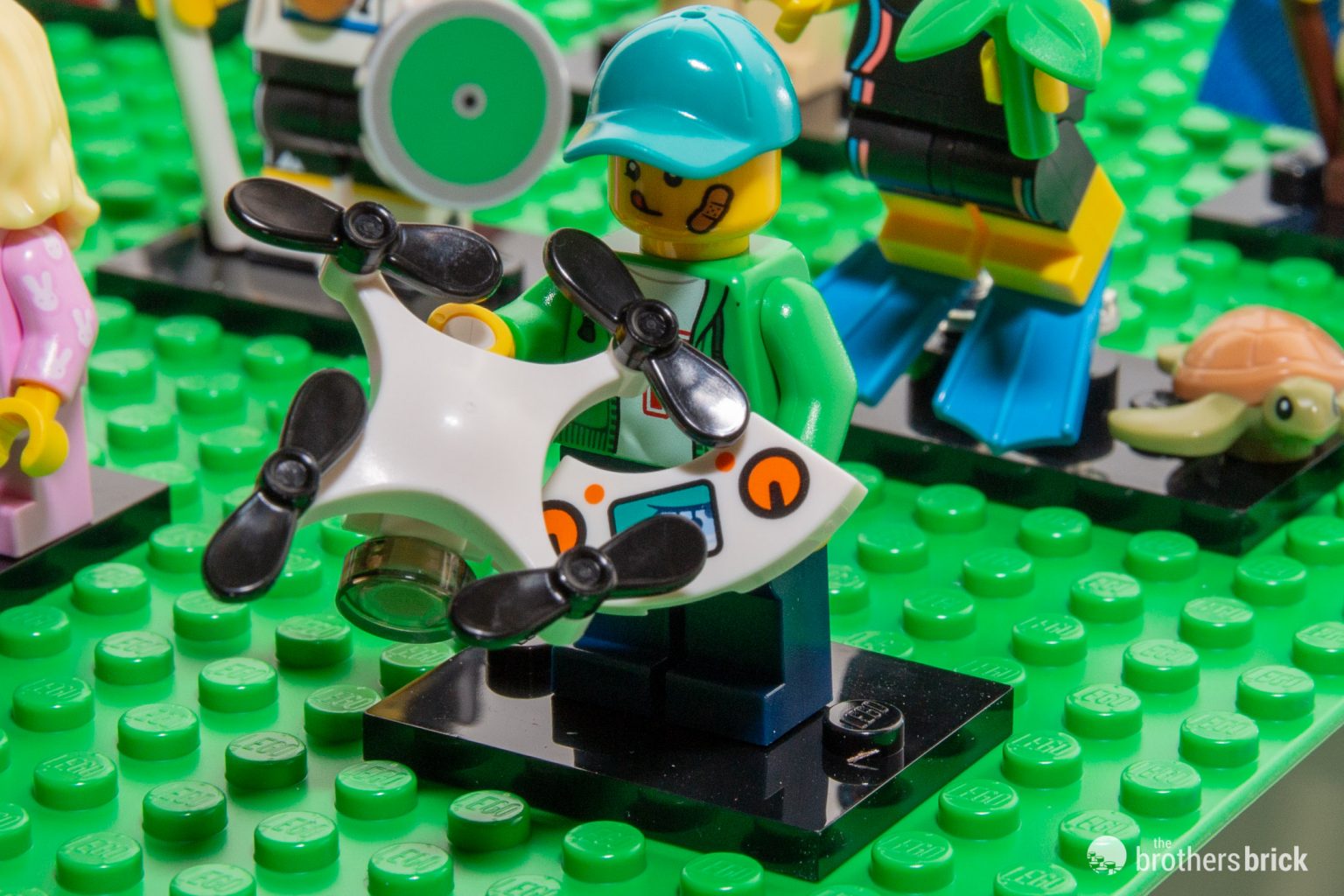 However, the best part of this little guy is his drone. While I’m not a parts expert, that strangely shaped drone part feels brand new, not to mention a very close look-alike to some of the existing real-life drones. This one, boys and girls, is definitely a keeper!

This next figure, Red Futuristic Ranger, screams “Power Rangers” to me, and I’m sure I’m not the only one. In the past, we’ve seen LEGO minifigures made in the image of some un-licensable (is that a word?) characters, like King Kong or Godzilla (and I’m sure there are many others, too). Go go Power Rangers! 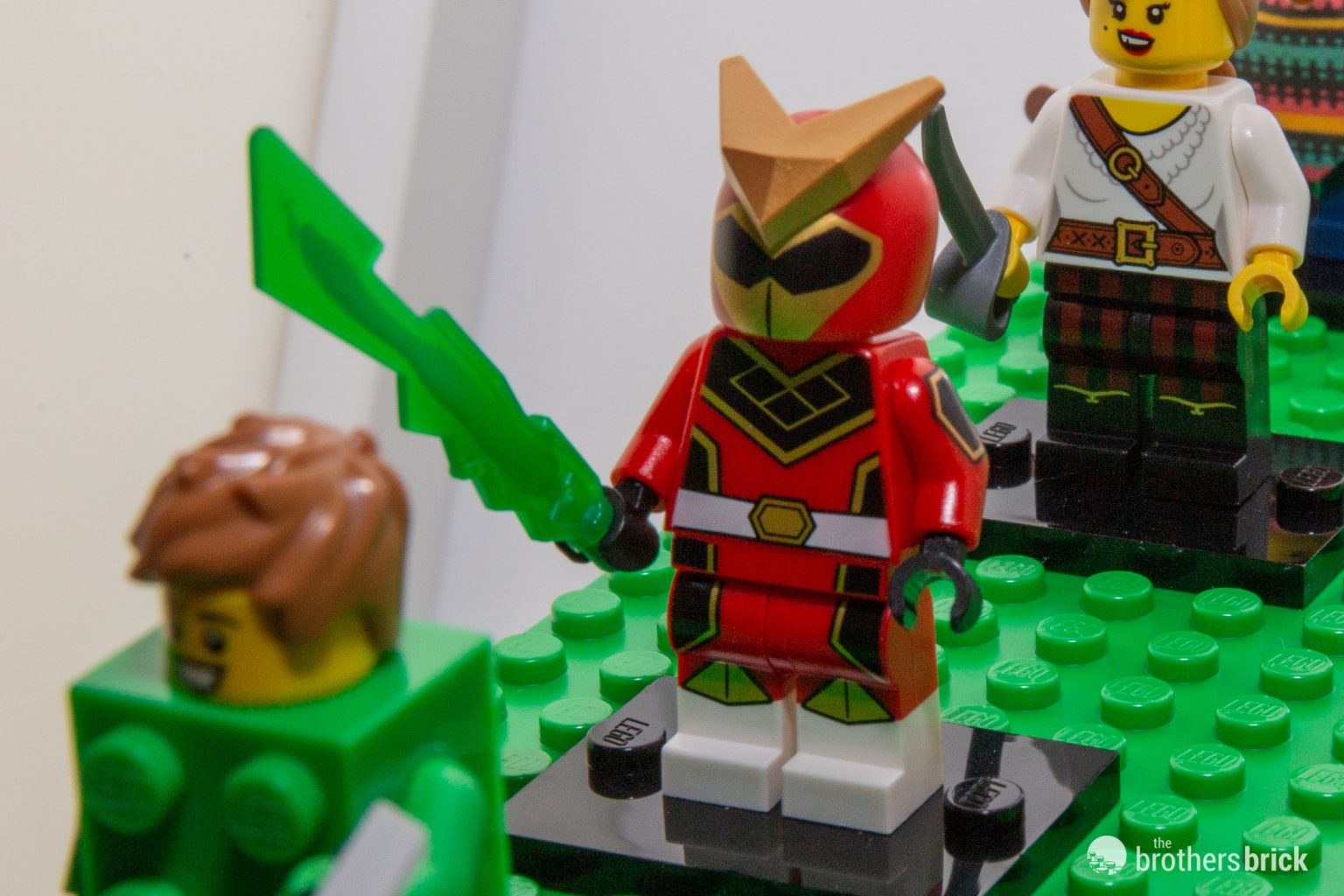 Speaking of movie characters… this next one has an uncanny resemblance to the one I watched when I was a kid. It’s even named after him – which, I doubt, will be his official name, but you never know. Ladies and gents, I give you Karate Kid! 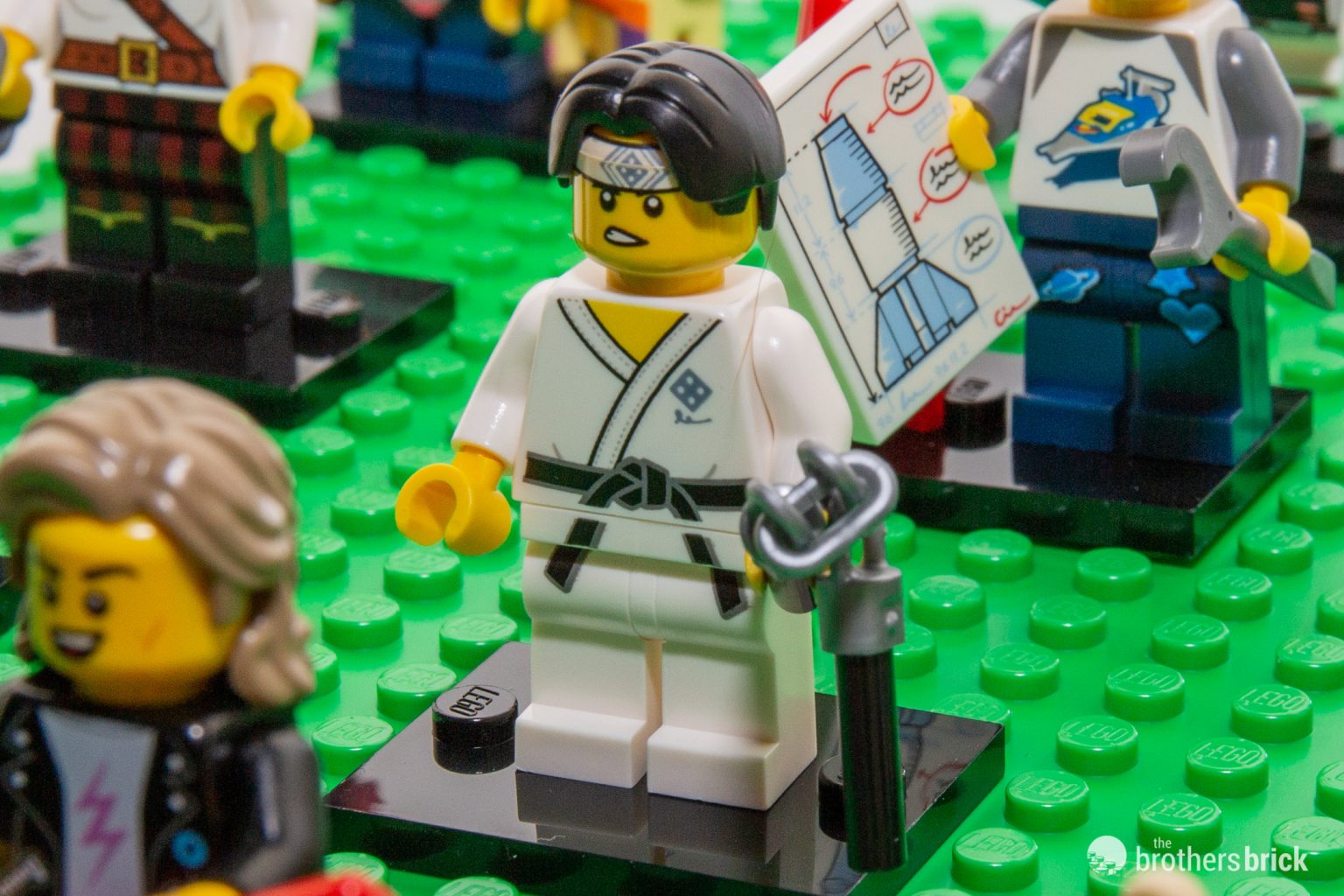 His hair has been used in a handful of characters before, but it’s the first time we’re seeing it in black. It reflects the original Karate Kid perfectly. The nunchuks are a nice touch, too.

The Track & Field Athlete is probably the least insignificant minifigure of the lot for me. If you ask me which one I definitely wouldn’t buy, I would point her. She just feels like a replica of the Team GB minifigures. However, she does have a nice Easter egg… the number written on the front and back of her torso is 0937. Look familiar? 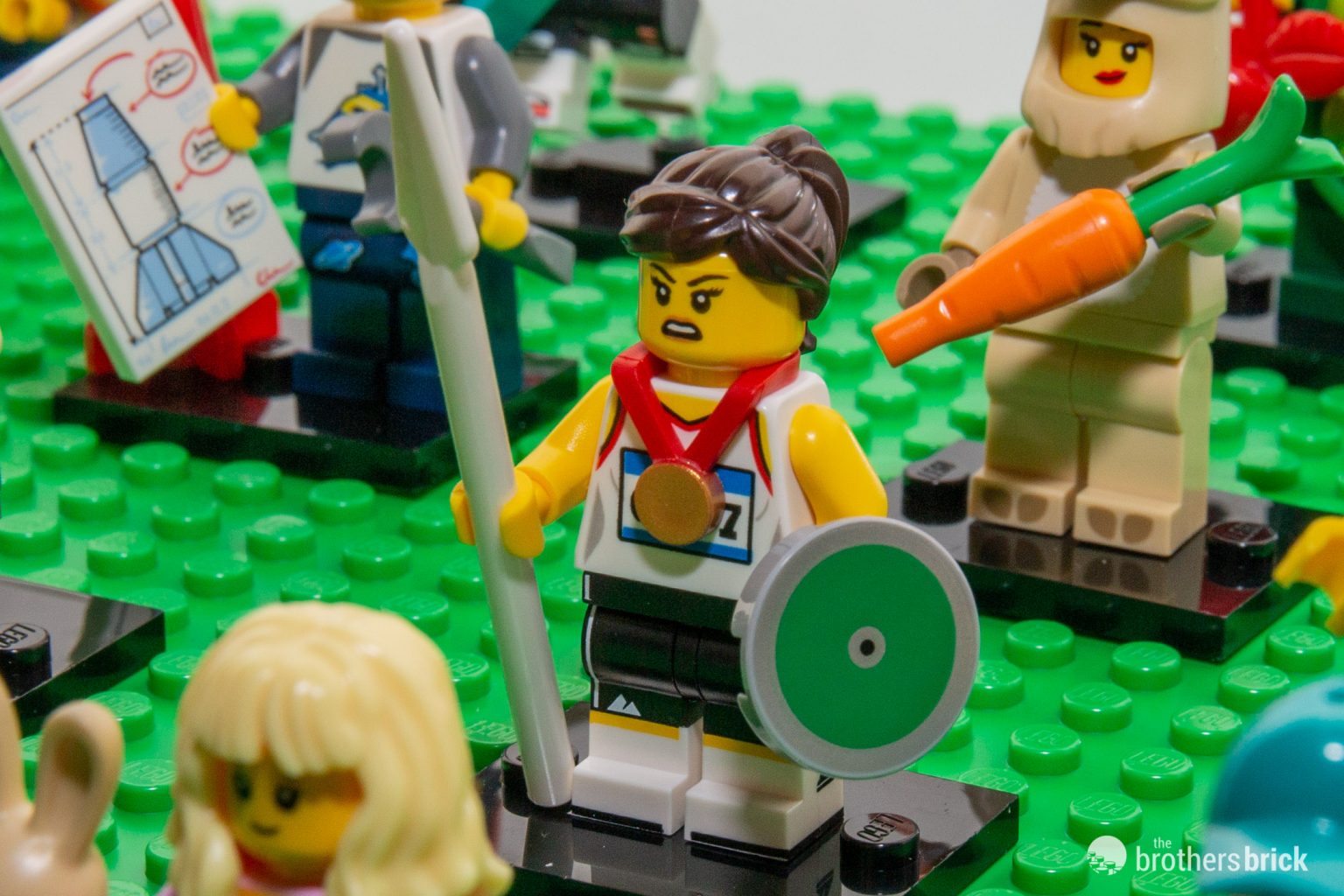 If you’ve been reading my other articles, and paying attention to this one, you’ll know that I really lose myself when I see new animals. Even more so, when they’re babies. Remember back in 2015 when they released the baby bunny? I was the one who went crazy over it. And when they released a baby dolphin and a baby turtle in Friends sets last summer, I couldn’t stop screaming. Well, same’s true for this last minifigure, Female Diver. With. A. Turtle!!!! It looks even better than the previous one, with its colors and fins and… yeah, you get the idea. 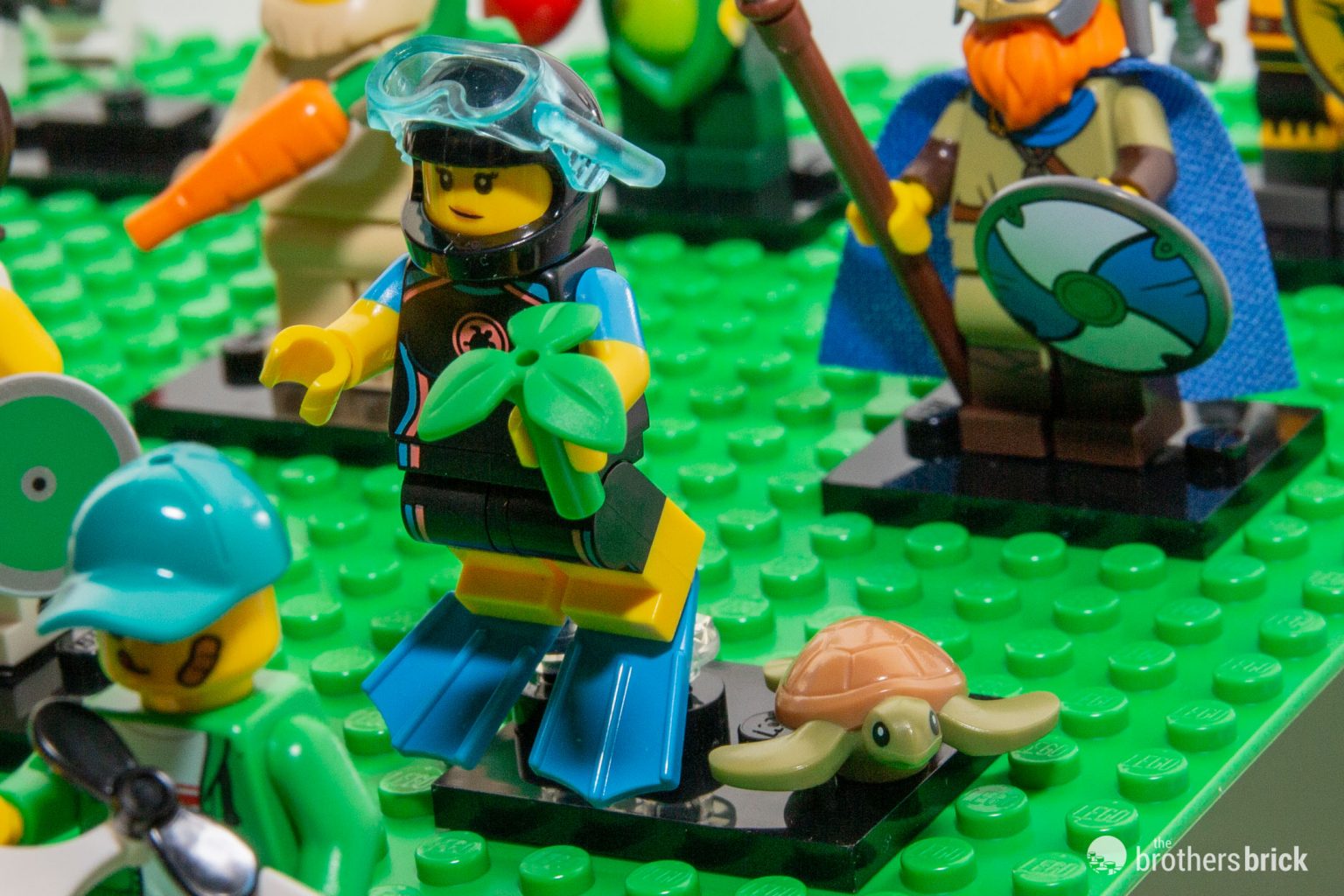 Sorry, Ms. Diver, but I’m only getting you because of that cute little turtle you have with you. Although, I’m sure you’ll make an excellent addition to many beach scenes all over the world.

Overall, I think we’ll be getting some awesome figures and accessories come April. Could it have been better? More fitting for the 10th year of CMFs and 20th release in the series? Of course. But many of these are really unique, in my opinion, and leave something for the CMFs to come. Also, the male-female minifigure ratio seems to be increasing, with 8 of each in these series. Getting more female characters with different professions is always a plus in my eyes.

So, what do you think of these new figures? Which one are you looking forward to the most? Let me know in the comments!