The Harry Potter line has gone hand-in-hand with the LEGO brand for almost two decades now. While the 2001 sets started very small and simple like most, it has since grown to one of the most collectable (and expensive) lines of the entire LEGO Library

When I heard about the announcement of this release, in the back of my mind I still remember fondly the 2011 set of the same name, with that set having half the price and less than half the pieces of this new magnum opus. The sheer volume of this set is also comparable to 71043 Hogwarts Castle from 2018, though anything matching it’s squared “studdage” is unlikely for some time.

LEGO 75978 Diagon Alley features four structures making up seven iconic businesses from the hidden wizard market, and 17 minifigures (including two owls), four of which are new figures for 2020, exclusive to this set (Gilderoy Lockhart, Florean Fortescue, Lucius Malfoy and the Daily Prophet photographer). I’ll be looking over the details of the businesses from left to right based on how they are positioned in the image above. 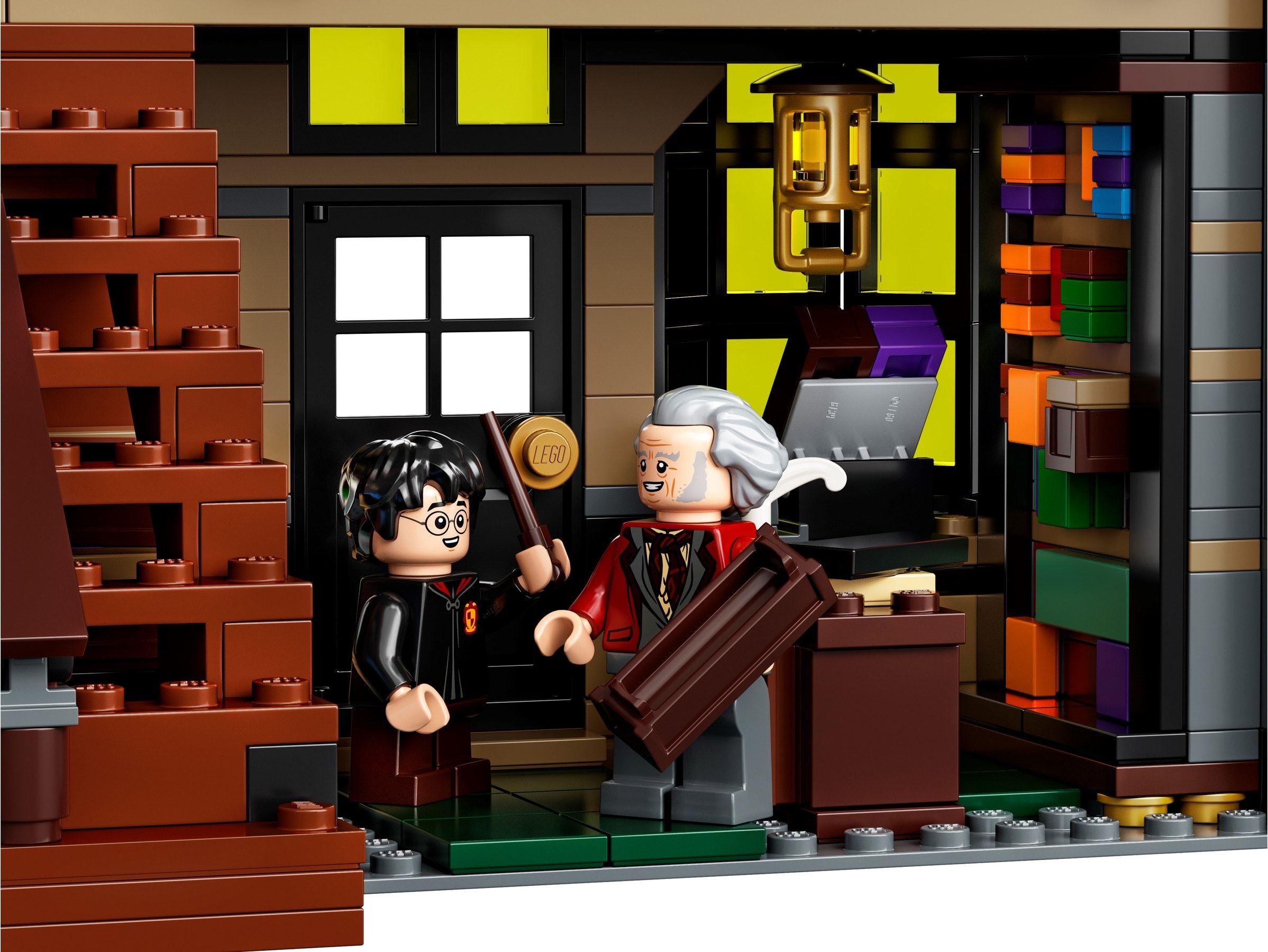 Ollivanders Wand Shop is one of the most well-known and iconic stores from the series, and here it is immediately recognizable. The exterior is made out of texture tan bricks and black window frames with trans-yellow inserts, with grey accents making a modest interpretation of the all important wand maker’s shop. Within we find a rustic interior by the use of brown stairs and railings to be a shorthand for old wood, and simple light fixtures of a golden lantern and a candle upstairs. Behind the register, Ollivander stores his selection of crafted wands, including some working packing boxes for wands once they have chosen their wizard or witch, made just for this LEGO Diagon Alley set. Much of the floor space on the first floor is covered in flat tiles, so position your figures carefully or keep them off the carpet. 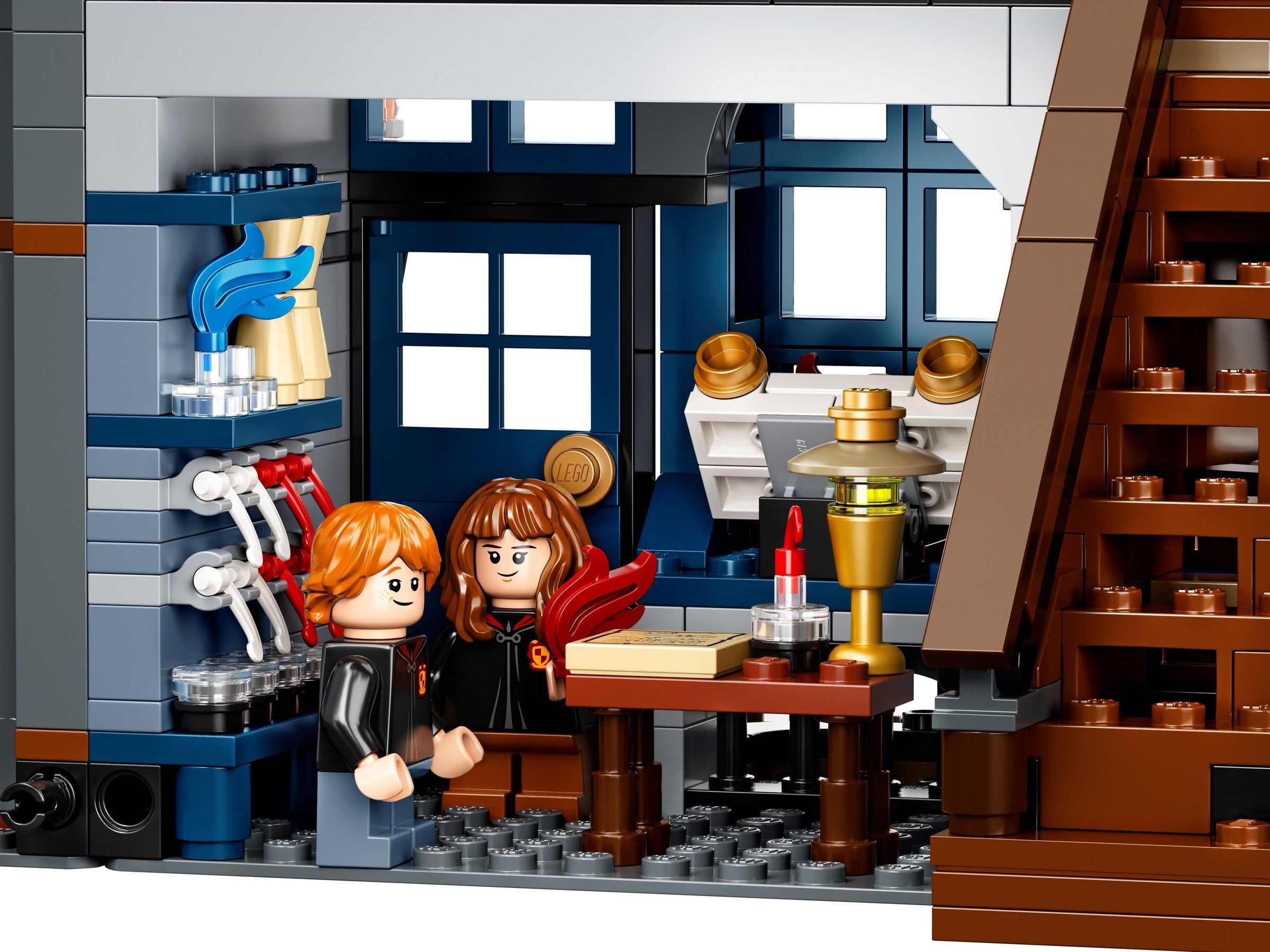 Scribbulus Writing Implements gives the aspiring Hogwarts students or expert scroll writers their one stop shop for parchment and ink, assuming both mundane and magical varieties. The outside of the small store is made with sand and dark blue bricks, and light grey textured bricks for extra detail. Inside the cramped space, there are a variety of quills and inkwells for sale, as well as some printed parchment on display to show what the product of Scribbulus’ are capable of. Upstairs, the curious wandered will find an old couch with an exclusive sticker, as well as a strange skull, with possible origins to colorful spinning ninjas. 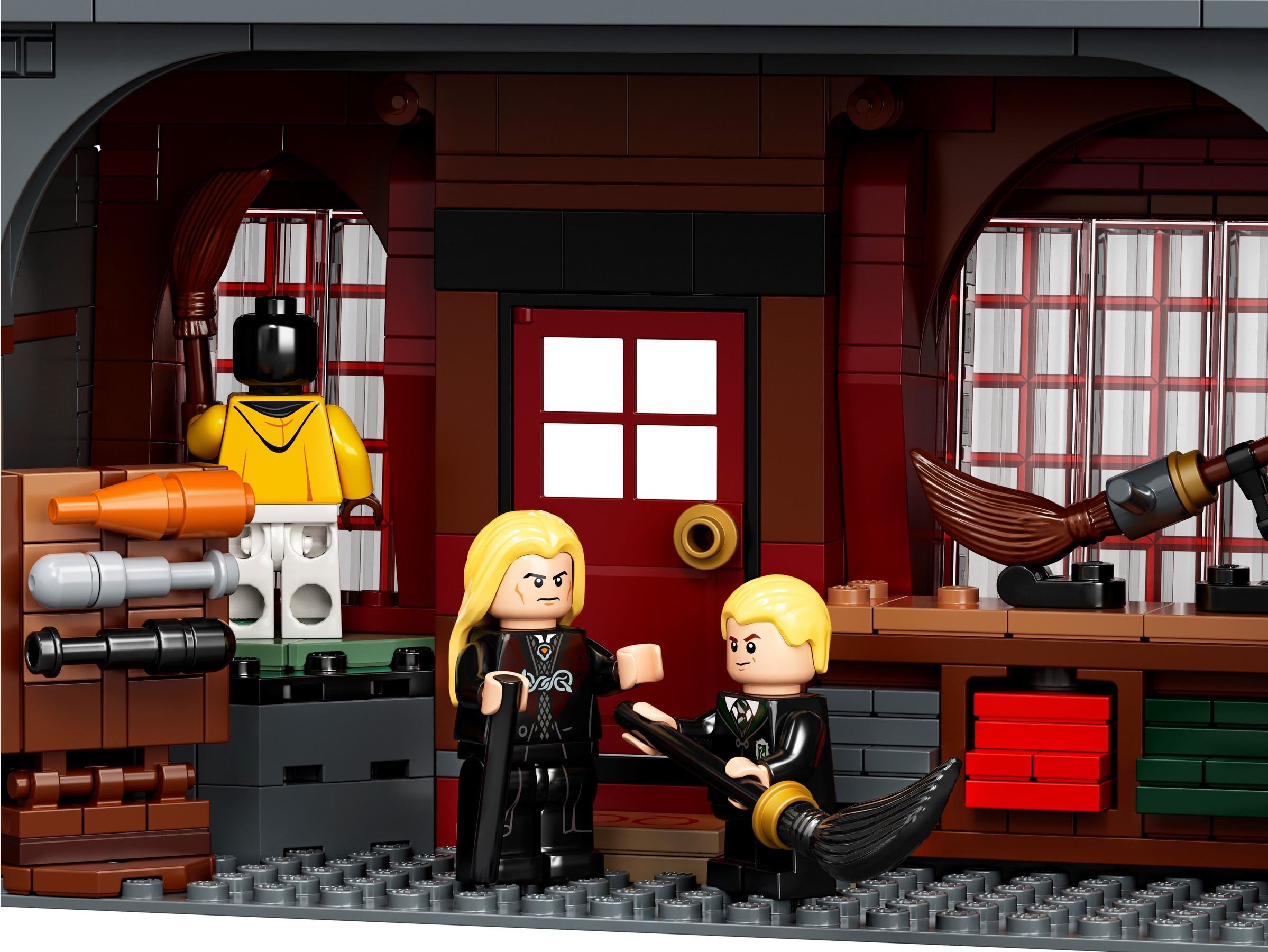 Quality Quidditch Supplies is likely a favorite of the local sports fan of the Wizarding World. The scarlet and sand green building outside proudly displays a golden snitch above the door, with classy red outlined windows letting in plenty of light. On display are the uniforms of the Hogwarts house Quidditch teams, the clubs for the Beaters of the team, and the all important and valued Nimbus 2001. A sign on the second floor says “Feel Free To Test-fly Any Of Our Brooms,” but let’s hope someone nearby knows Brickium Emendo, just in case. This area also has the least amount of tile on the floor, affecting the look, but leaving plenty of room to place and pose figures. 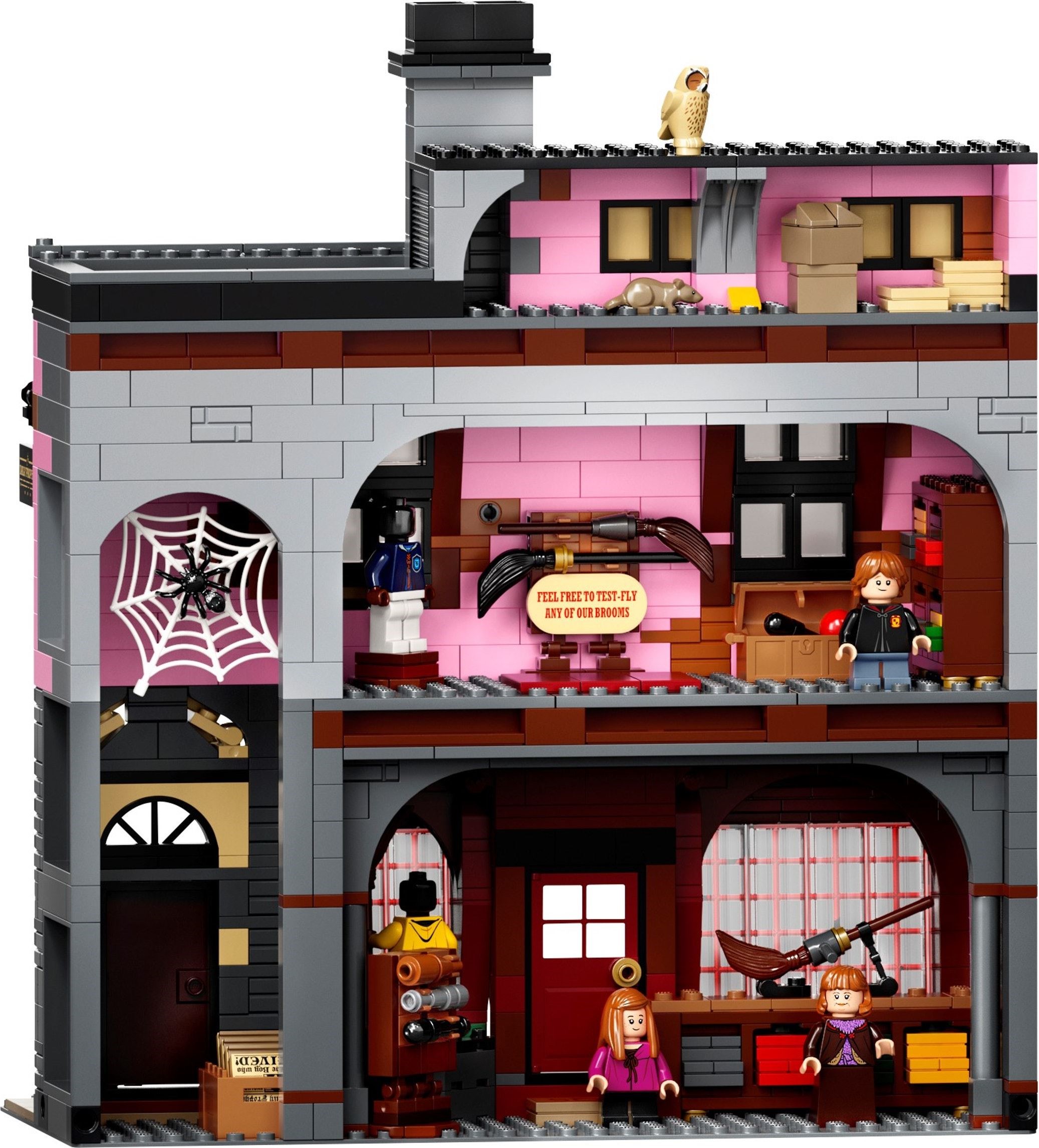 The door with the “Daily Prophet” name above it from the outside appears to be offices for the widely read (viewed?) newspaper. However, once you step inside, all that there is to be found is a small crate of the current issues, the headline, of course, being “The Boy Who LIVED!” The large spider web above seems out of place for a place of business, only adding to this drab part of the LEGO Diagon Alley set to make it only slightly more eye-catching, but perhaps it’s not enough. 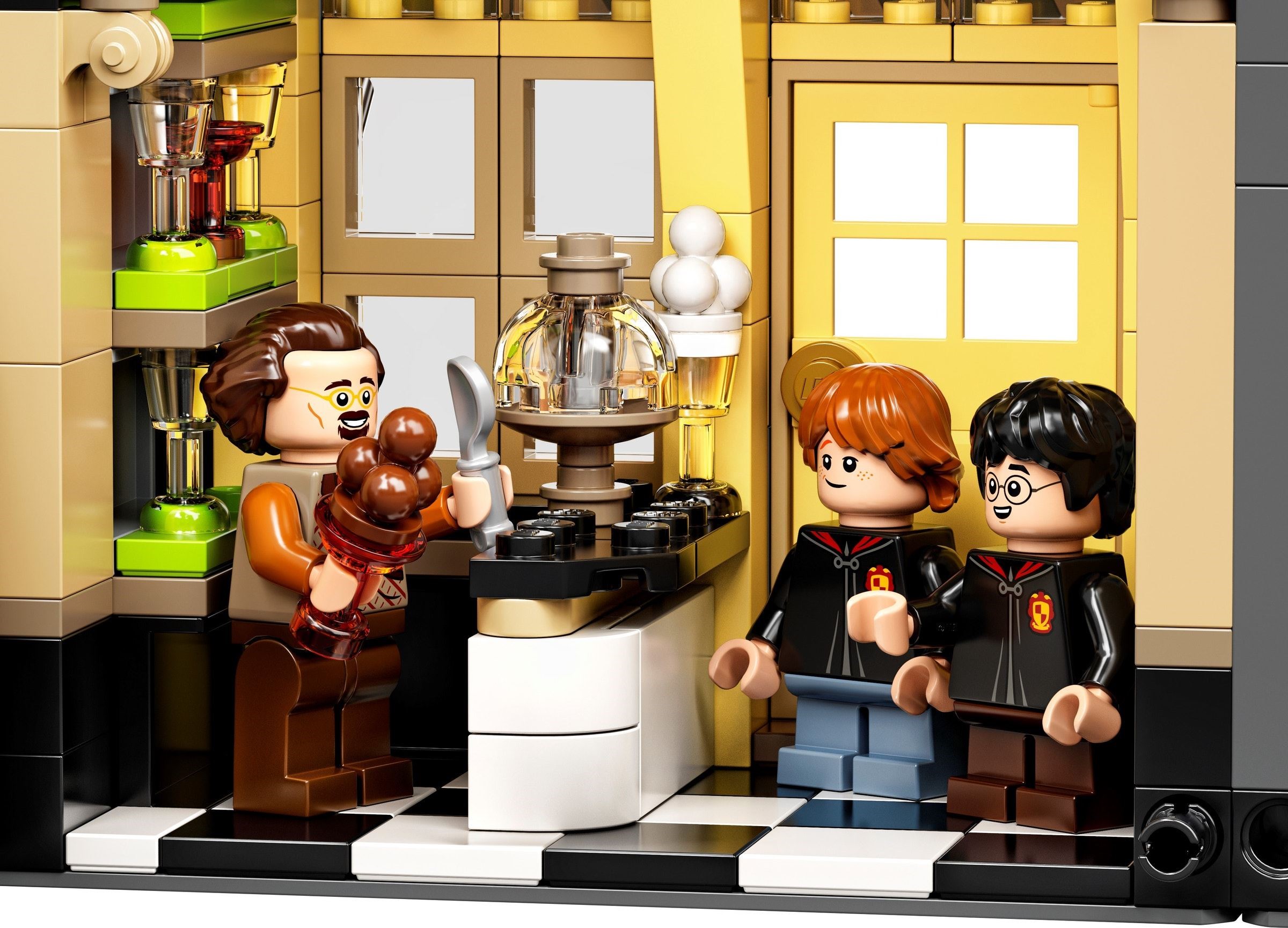 Florean Fortescue’s Ice Cream Parlor, only seen for a second in the films, is obviously one of the few places a stressed student can come to relax, either to escape their exams or another round of dementors. Florean’s shop utilized the new for 2020 martini style glasses in trans-red for a fancy serving option, and has room upstairs with a chair and lamp if you’re looking for a place to relax, read, and have some tea. Once more, the floor is made out of tile, here in a nice black and white fashion, so be sure your minifigures don’t get more ice cream than they can balance.

However, with how little importance to the world this location has compared to the Daily Prophet, I feel that perhaps they could have swapped places, as I’m sure many people who haven’t been to Diagon Alley at the Universal Studios park may not have even been aware that this ice cream parlor was even here. 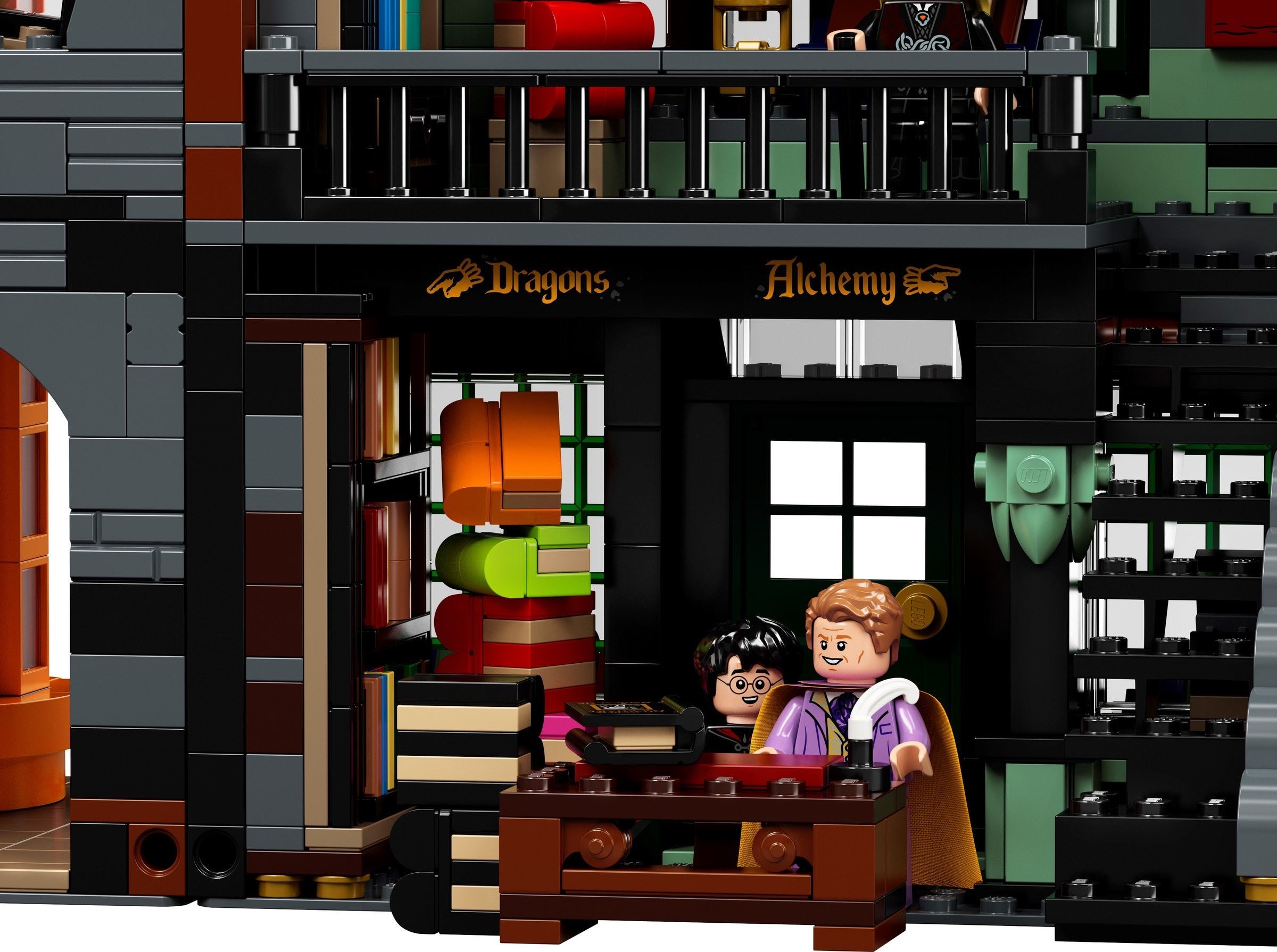 Flourish and Blotts Bookseller is the green and brown building where both teachers and students can obtain their important school supplies, or where one can get their book signed by Gilderoy Lockhart, if you’re into that sort of thing. Piles of books on Alchemy and Dragons are available for purchase, along with some copies of Lockhart’s biography, “Magical Me.” The interior black and green makes for a very slimy and Slytherin-like feel, which doesn’t make it the warmest environment, or the most screen accurate. 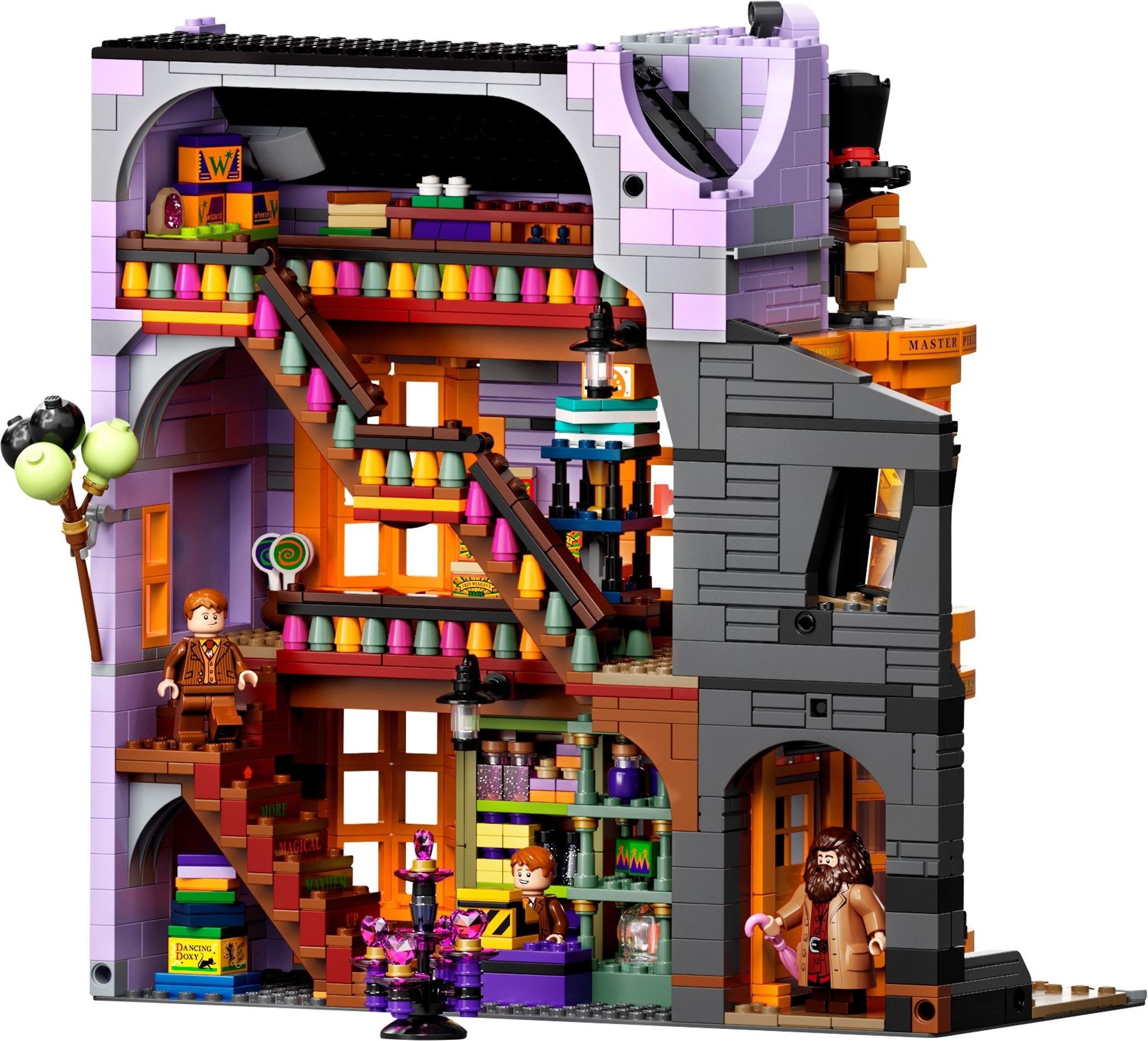 Last but certainly not least, we have the largest shop of the LEGO Diagon Alley set, Weasley’s Wizard Wheezes. Just past Knockturn Alley,  Fred and George keep stock of their magical pranks and other goods in their lilac and orange corner building. A Dancing Doxy, a Love Potion, or a Basic Blaze Box are just a few of the items available for those looking to have some fun on their weekends away from classes. The lack of tiles and the size of the interior leaves plenty of room for figures to shop on all floors, and maybe even sliding down the stair rails if they are feeling adventurous.

As we see LEGO starting to lean more and more into the 18+ AFOL crowd, here we see a magnificent example of just the kind of thing people have been wanting to see. The most incredible thing I find about the LEGO Diagon Alley set is that, while not Modular Creator Expert quality, the buildings were designed to be compatible with the other much beloved line of structures. For many, a set like this is a dream come true, and with it not remaking two of the three structures of the 2011 version, they are also still comparable for expansion. It also makes a great way for the display of your CMF Harry Potter figures, with plenty of space inside and out, just be careful of those tiles!

What is Base Ace: A Compatible Product Review