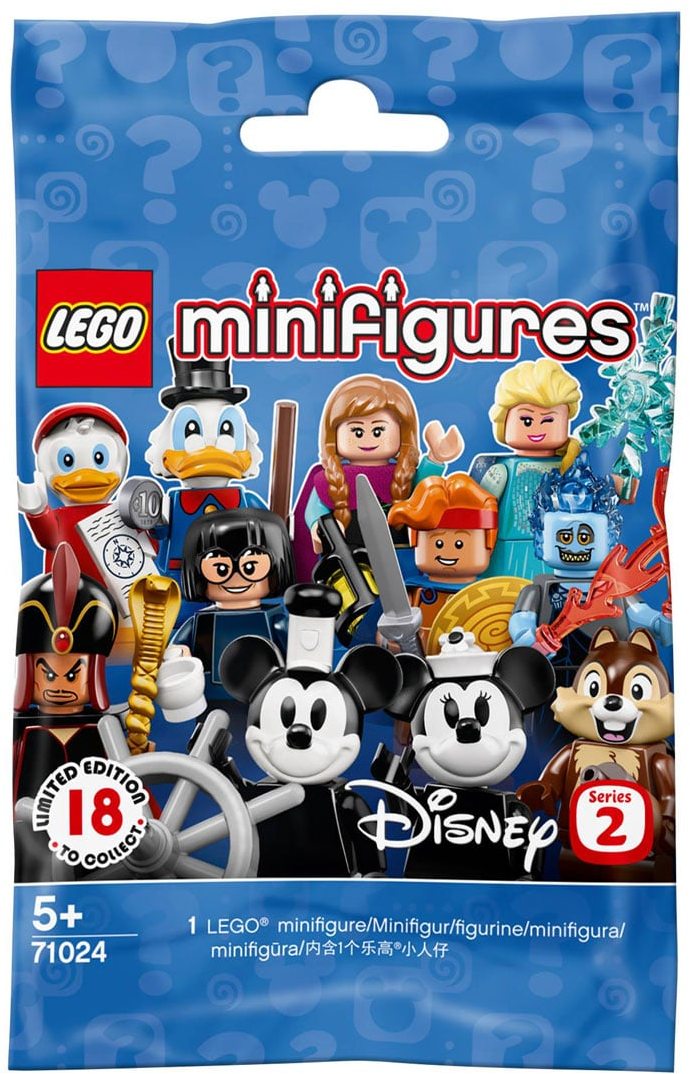 Well, since we are on a Disney roll right now, I decided that releasing a review of LEGO Disney CMF Series 2 would be perfect. Series 1 was legit a near-perfect series. So will Series 2 top that? Find out over these next two articles!

Released in 2019, three years after the original series, the minifigures of LEGO Disney CMF Series 2 retailed for USD 4 each. There were 18 figures in the entire CMF. 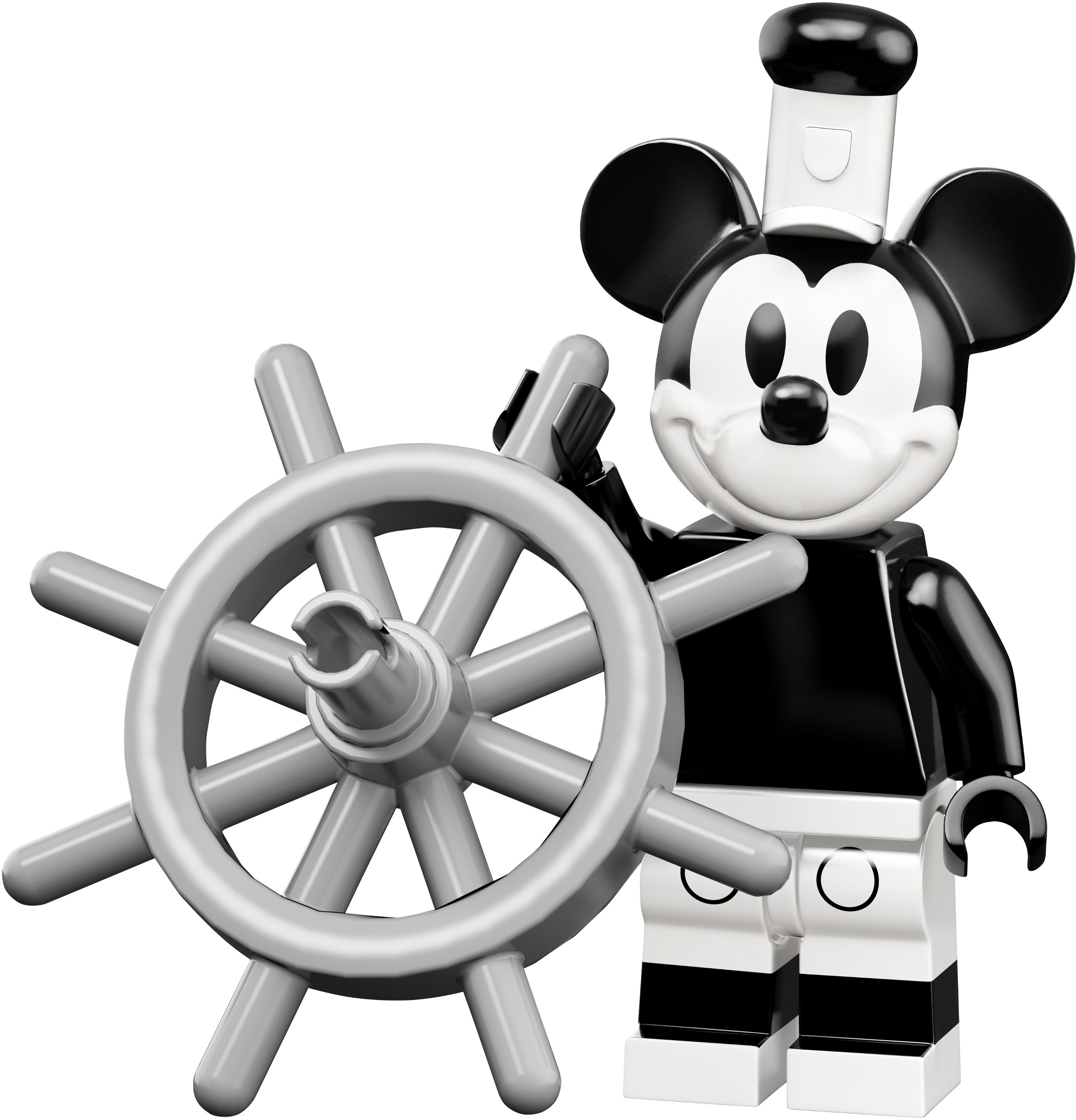 Coinciding with the release of the LEGO IDEAS set, Steamboat Willie, LEGO released Vintage Mickey. He was quite similar to his appearance in the Steamboat Willie set, although there were minor print and color differences. He reused the original Mickey Mouse mould, released in 2015. However, it was in a black and white colouring this time. Either way, it was moulded quite well. He also received a hat, which was the same piece from the Steamboat Willie set. His torso was completely black, on both sides. The legs were also dual moulded black and white, with printing on the shorts and shoes. 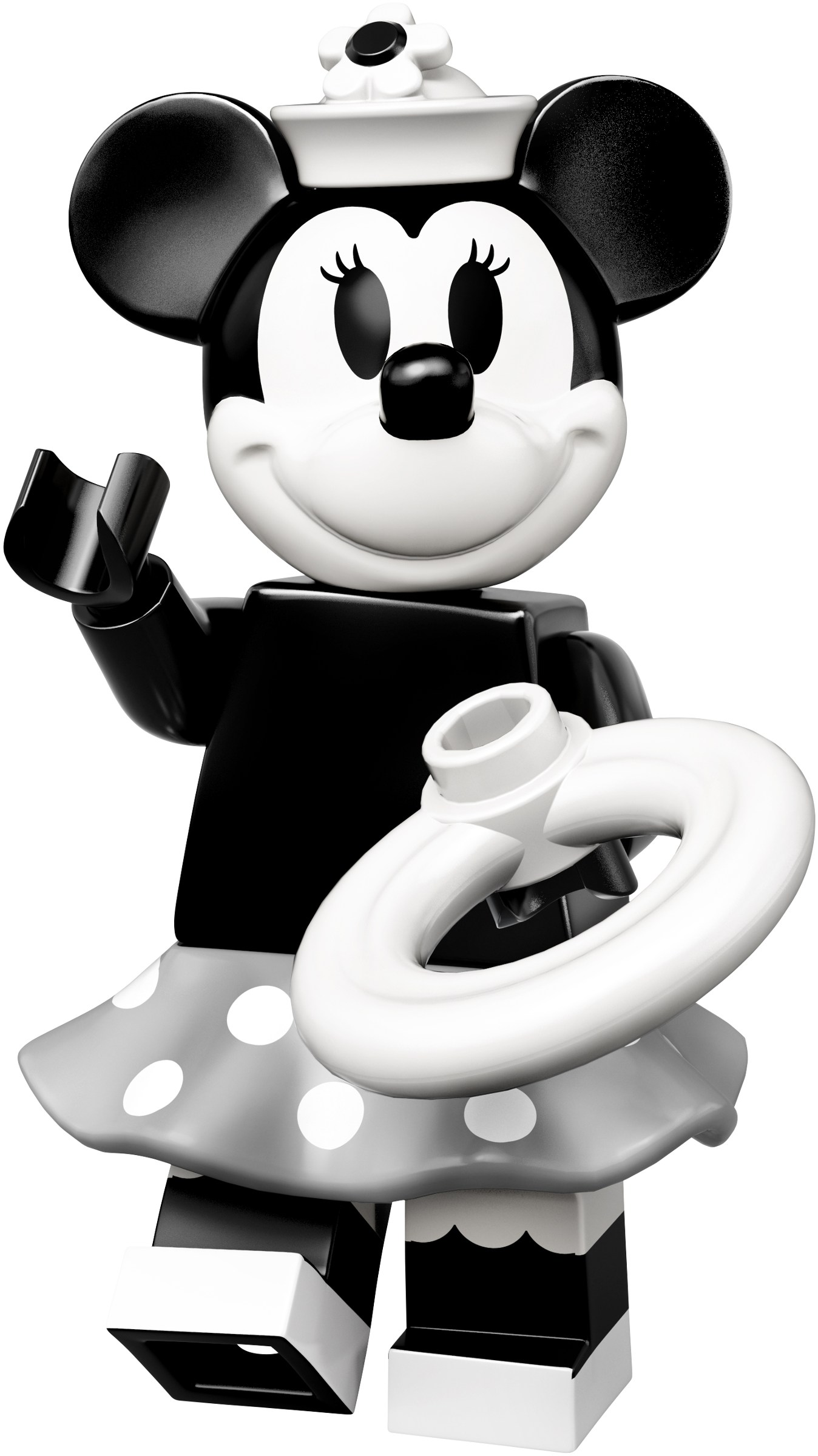 And like Mickey, Minnie was also placed in this series and had a similar appearance to her Steamboat Willie figure from the mentioned set. It was not that surprising. LEGO could not help themselves. They have to place the two most iconic characters in every series and set. Because they sell. Similar to the Steamboat version, Minnie uses the same head mould as Mickey, but with eyelash printing. She also used the exact same hat piece for her as in the Steamboat set. Like Mickey, she had a completely black torso. She also came with a printed skirt piece – similar to her original CMF version. Again, she came with dual moulded and printed legs and a pool float piece as an accessory. Because safety comes first! 7/10 – she was also quite lazy because she was a rehash. 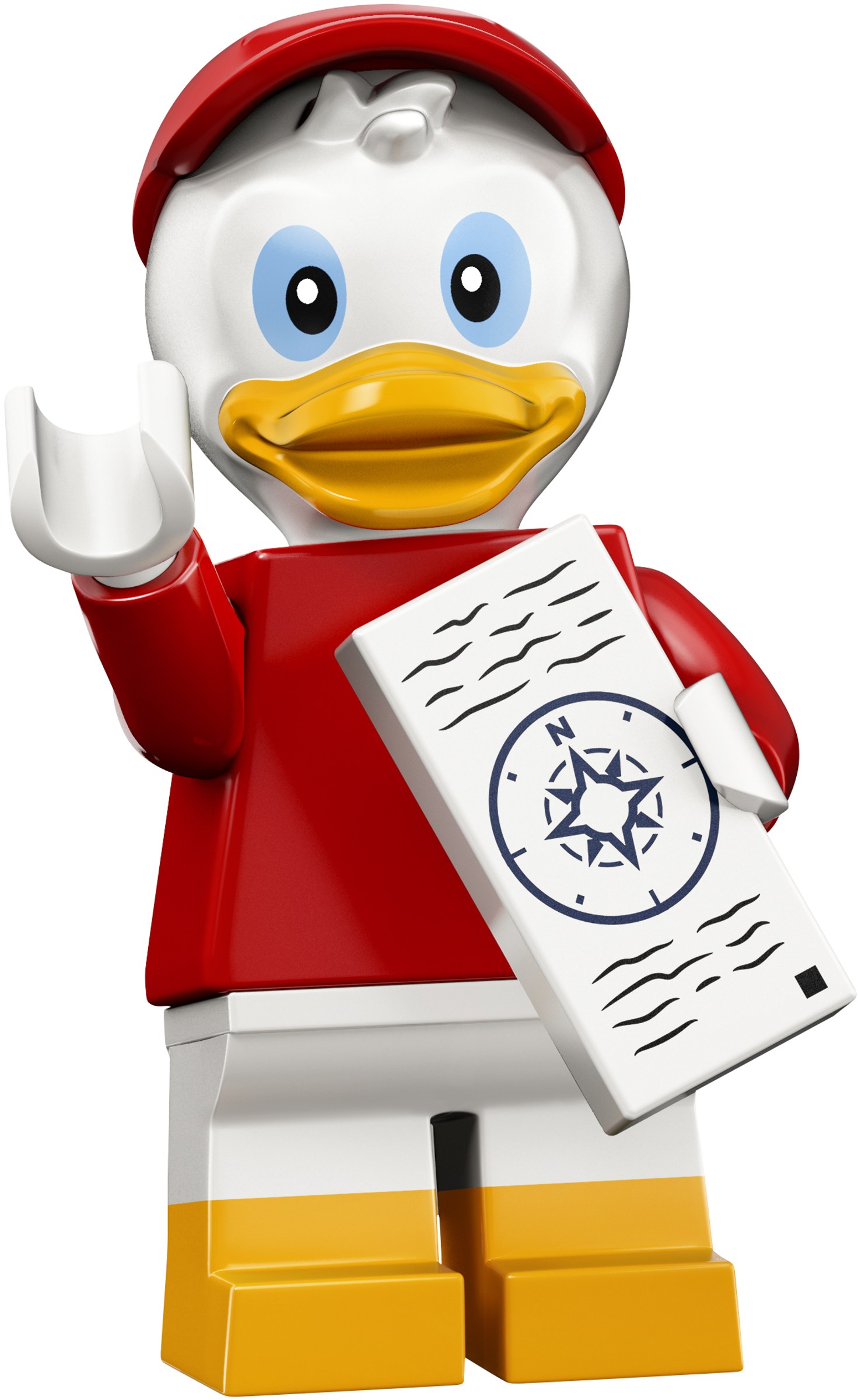 I literally have no idea who this character is. My Disney knowledge is quite inadequate so don’t judge me. I’m guessing he appeared in a cartoon TV show. LEGO decided to give him a completely new head mould. Yeah, it was cool with the hair sticking out, and so too the beak. His torso had no printing whatsoever. As much as it bummed me out, it was accurate. He came with dual moulded yellow and white short legs and a red cap. Like Donald and Daisy, he had a tail piece. Finally, his accessory was a printed compass. 7/10. 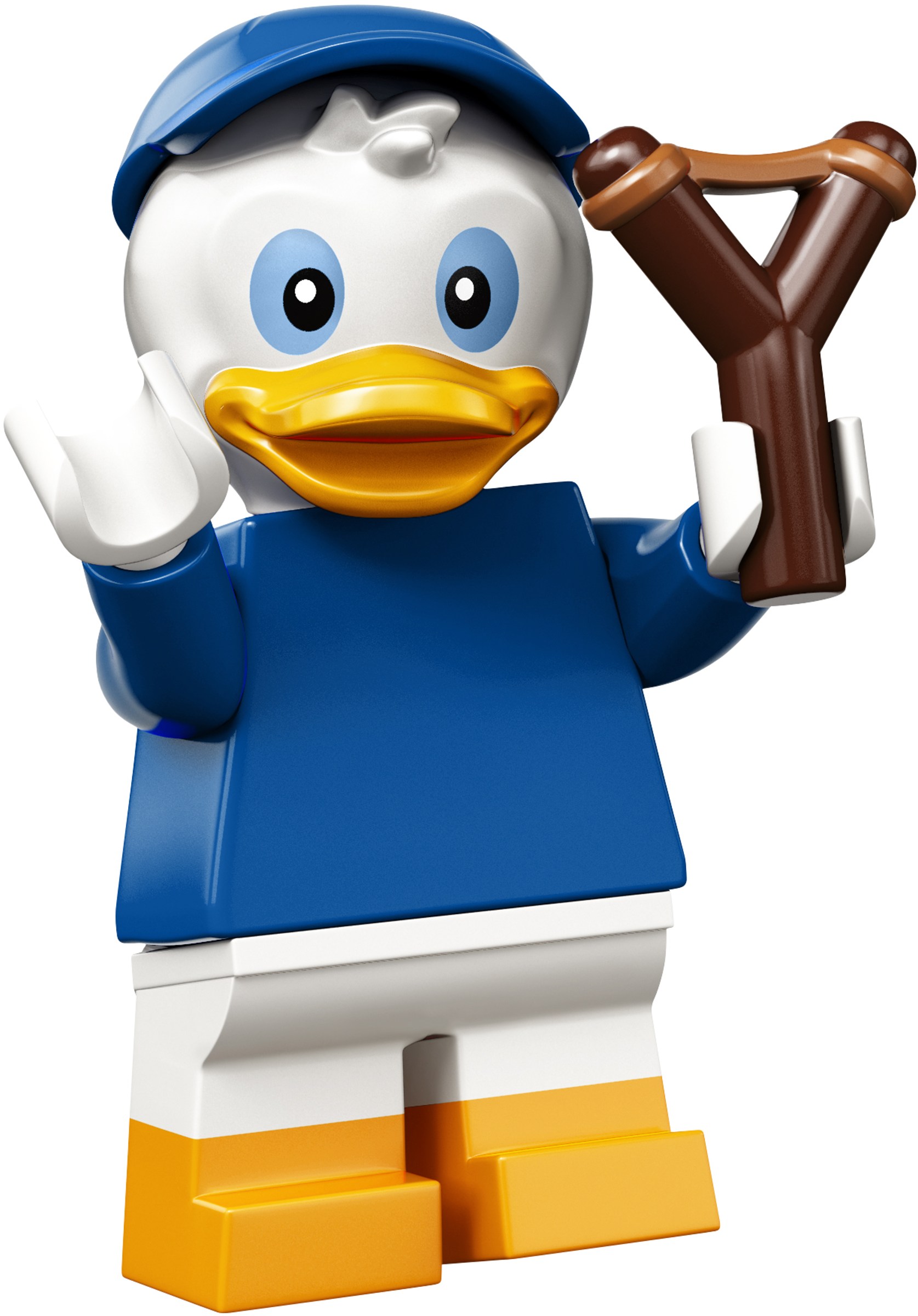 Dewey was also a very, very simple figure He was basically a repeat of Huey with a blue coating. The head mould was the same as Huey’s. His torso, like Huey, was unprinted, but this time in blue. His legs were a carbon copy of Huey’s. However, his accessory was different. It was a slingshot piece. I do wish we got a rock piece or a stud to go along with the slingshot. Overall, this figure was a 7/10. 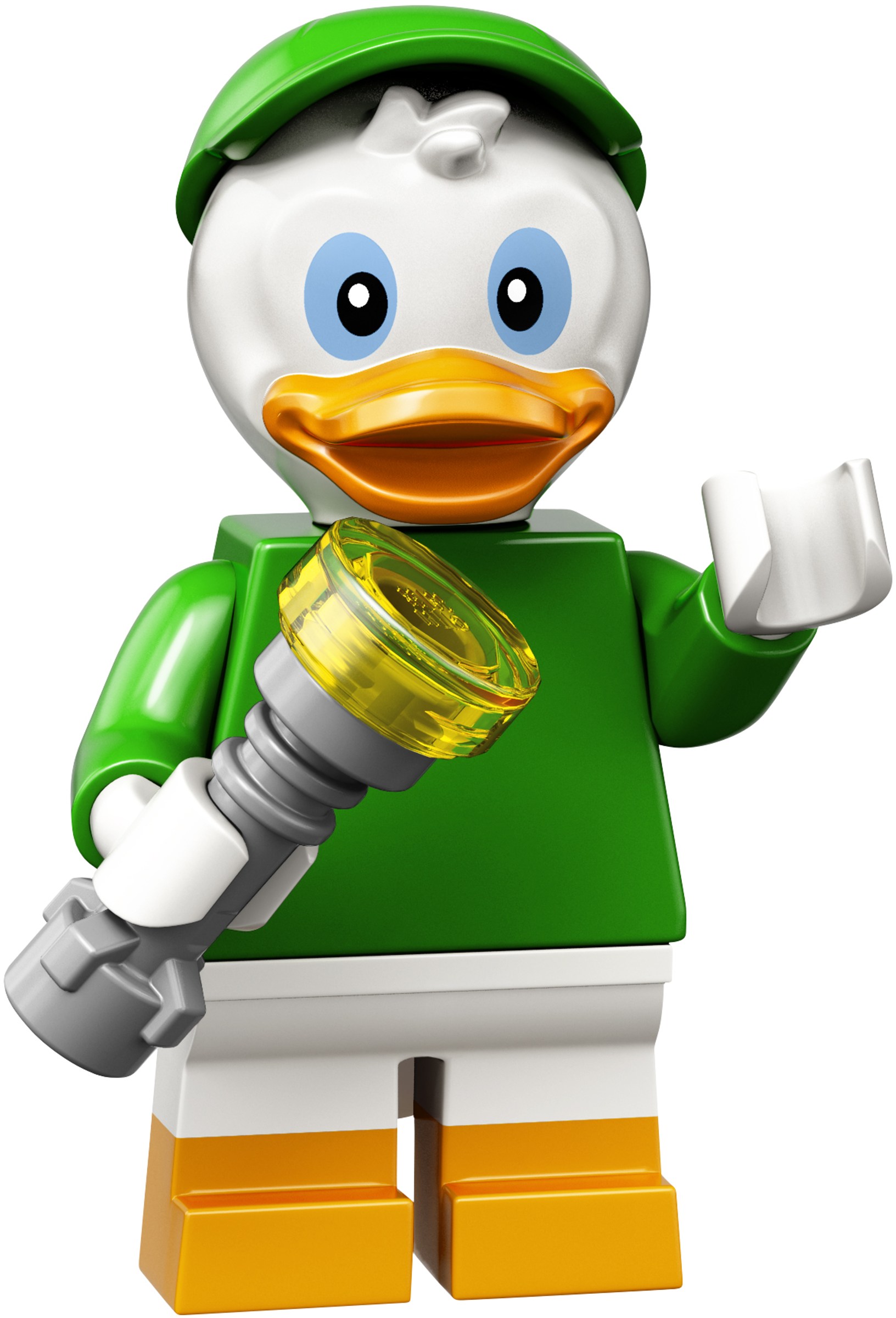 And guess what? Louie was the exact same figure as Huey and Dewey. He just had a green coating. His head – the same. His torso – a solid colour with no printing, like the other two. The legs – the exact same dual moulded piece as the previous two figures. So far, we are five figures into this series, and so far, I haven’t been impressed. I mean it was cool to get these figures – don’t get me wrong. But seriously, did we need another black and white Mickey and Minnie? And the three ducks – I can’t argue with it. LEGO managed to be sly and save a lot of money by basically reprinting these figures. Yes, it was a smart move. However, we got so many unique figures in Series 1. Let’s just hope the rest of the series will pick up in quality. 7/10. 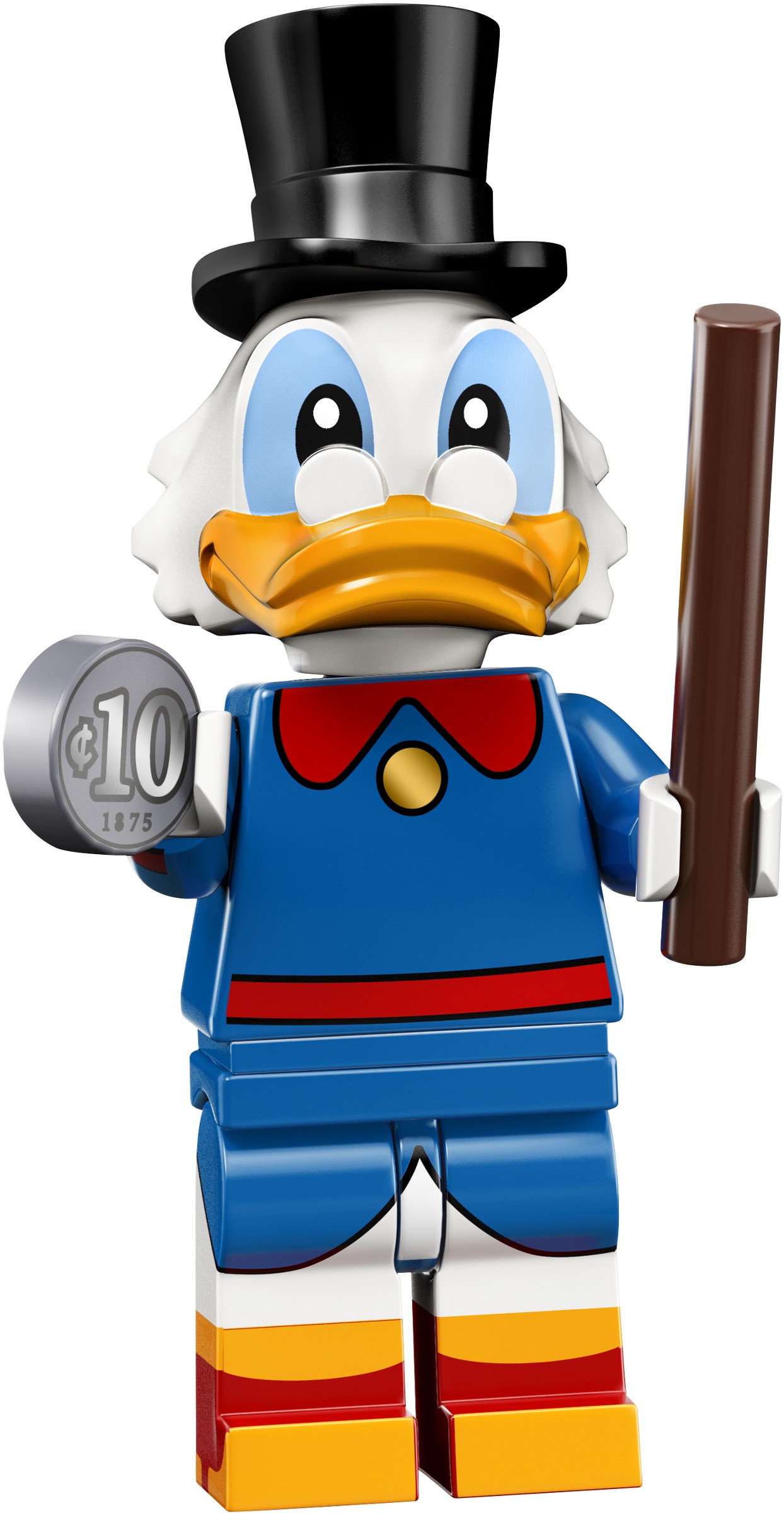 This was actually a really nice figure. But by this point, I am kind of fed up of reviewing LEGO ducks. At least Scrooge McDuck was a unique enough figure from Huey, Dewey and Louie. LEGO created a completely new mould for his head. Every corner and crevice was just beautifully moulded. They even managed to mould his iconic glasses into the head. On the top of his head, you could attach a top hat. His torso was quite simple – with a bit of red and gold printing. Finally, we got phenomenally printed legs – with it being dual moulded, and addition of blue, yellow and red printing throughout. He had the same tail piece as all the other duck minifigures, but the edges were blue to be in harmony with his outfit. 10/10. 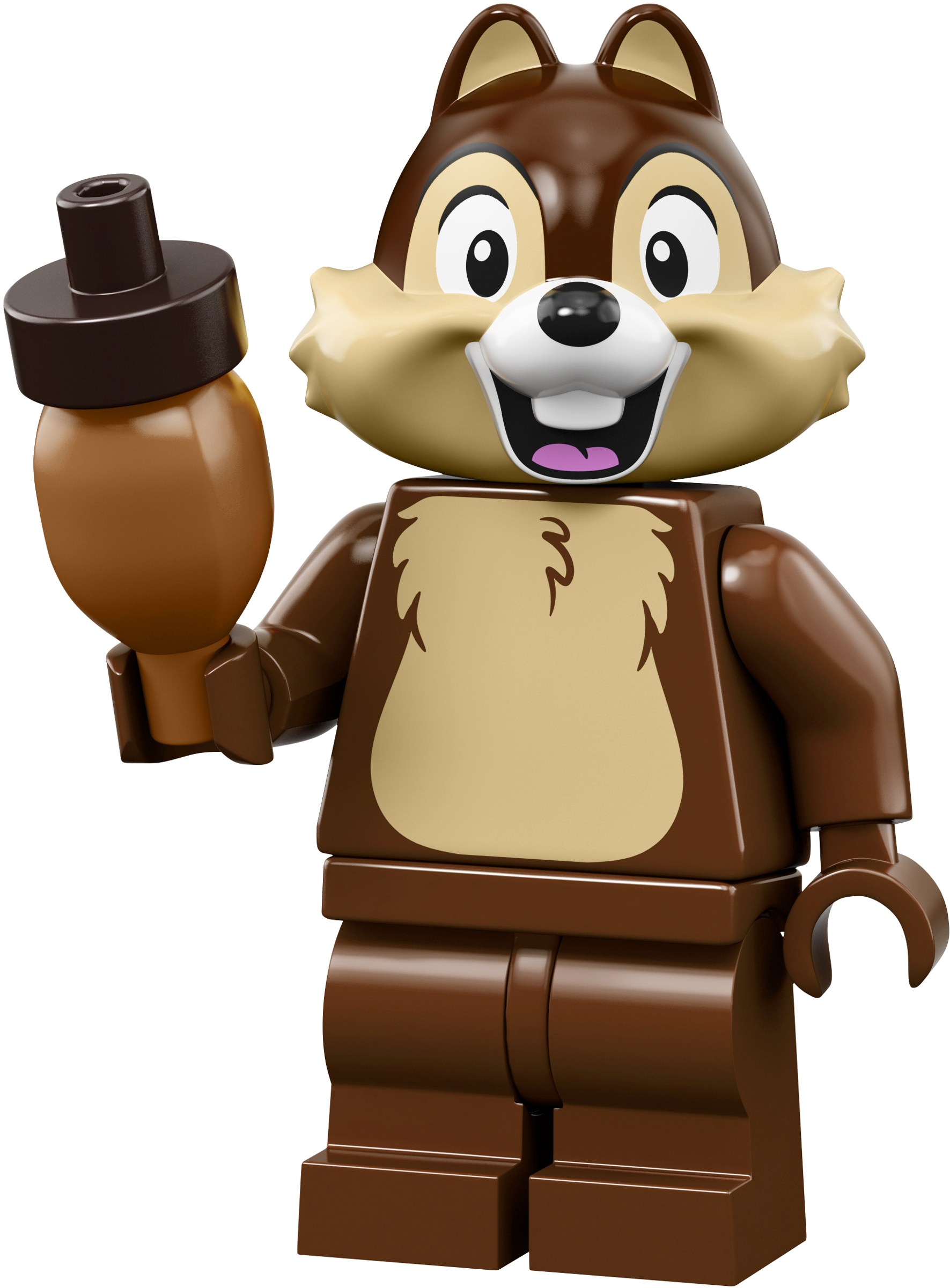 Sorry, but I just can’t remember this character. When the figure was first revealed, I thought that this was the chipmunk from the Bambi movie. But let’s just put my lack of knowledge to the side. His head mould was extremely well done. I think I’ve said this about every new head mould that LEGO has created. So, I honestly don’t know why I am saying this. Anyways, he came with a simple printed torso and plain brown medium sized legs. His accessory was an acorn. Can I just say, the build for the acorn was extremely smart. Props to the designer who came up with that. Congratulations! 9/10. 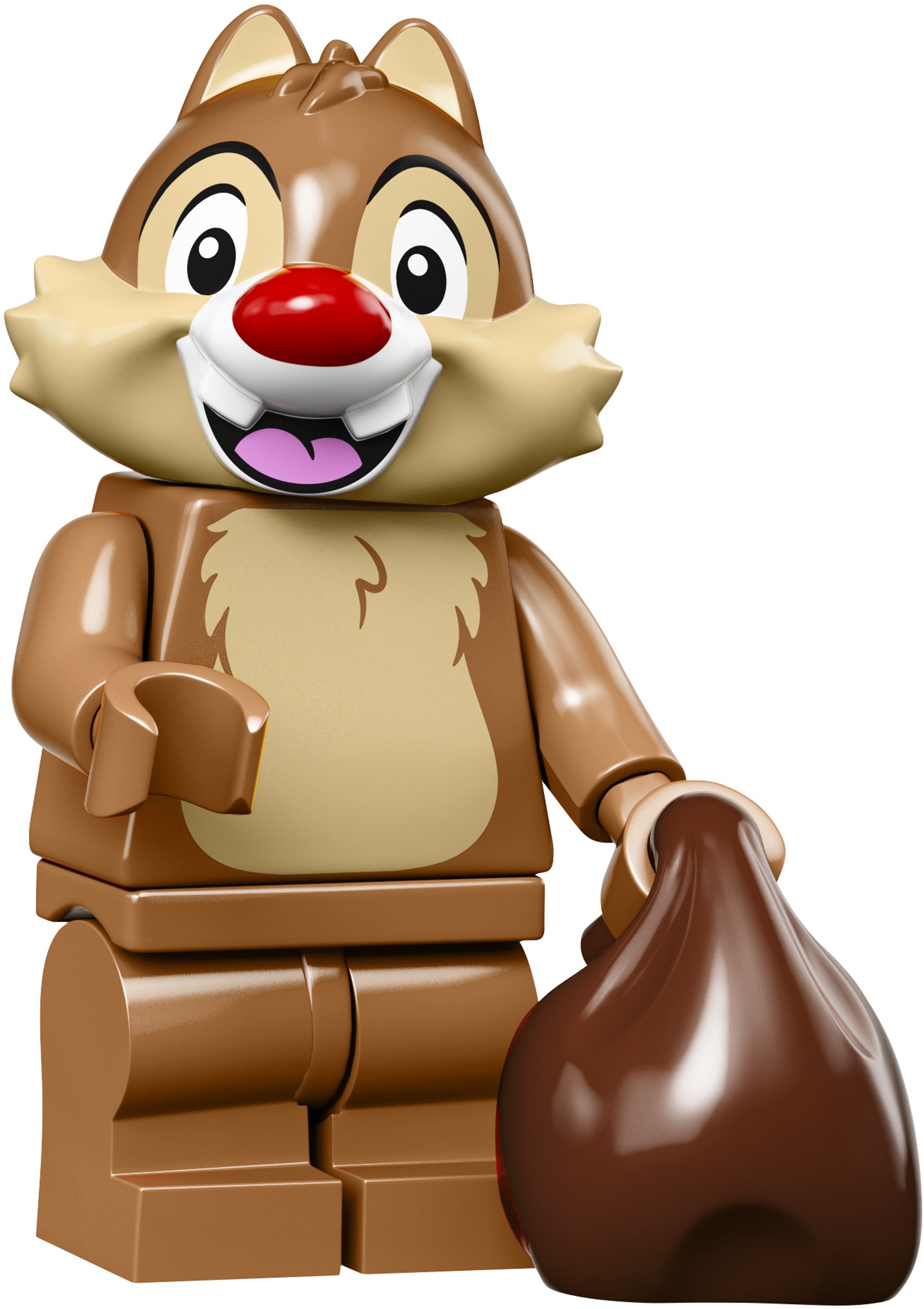 LEGO actually created a new mould for the head of this figure. Like what? I’m so happy with how they handled Dale. Yes, I don’t know who Dale is. However, let’s just appreciate that they didn’t cheapen out here, and actually gave him a new head mould. How was it different? On the top of the head, near the ears, LEGO added a bit of scruffy hair moulding, and on the mouth, added two teeth moulded into each side. Yes, Dale’s torso print was simple and he didn’t have any leg printing. Finally, LEGO gave him a bag as an accessory. I can only imagine that the bag was supposed to represent a bag of acorns. 8/10. 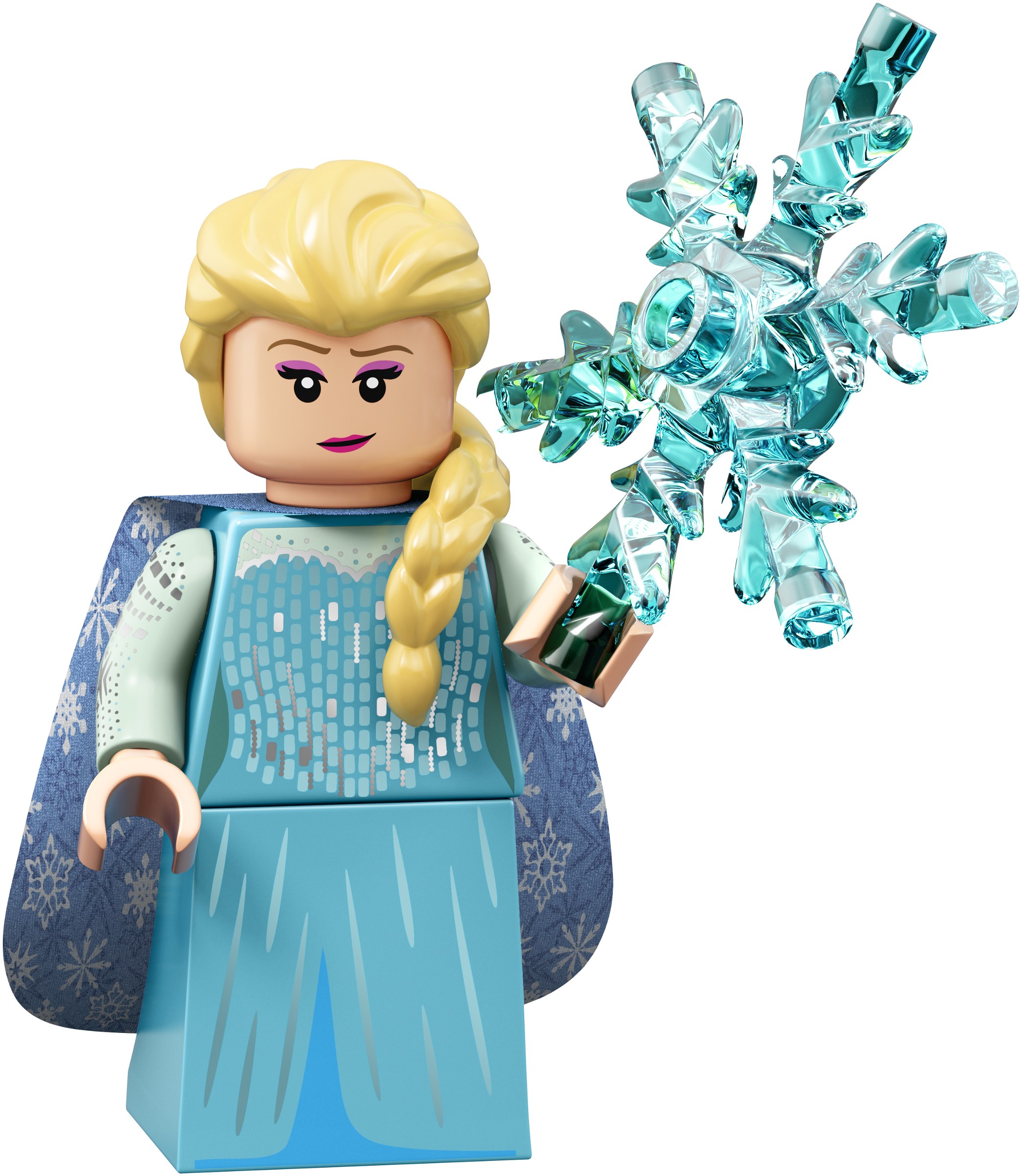 And finally, the queen of ice – Emma Frost. Oops. Sorry. Wrong franchise. LEGO gave the iconic character, Elsa, a figure. She was one of the only figures I got from the series. She came with an amazing new hair mould – which would’ve been perfect for an End Game version of Black Widow. Her head had two expressions – one which was neutral and one with a wink. Her torso was nothing short from spectacular – with sequence printing throughout the body and even arms! This printing continued onto her leg piece, which was a dress piece for minifigures. LEGO also included a well-done cape print. Oh, and she came with a snowflake piece which was infused with sparkles. 9/10.

And that’s it for today! I’m considering also reviewing every Disney set after Part 2 of this article, but I’m still 50/50 on it. I have a few weeks to think about it, so maybe we shall see! Anyways, take care guys, and I’ll see you next week! Bye!