I’m putting forward a review of sorts of a LEGO set that’s close to my heart, starting with the LEGO Doctor Who set.

First though, a bit of sci-fi history here: Back in the late 60’s (yes, 60’s), there was a TV series that scared the B-Jesus out of me & most kids around my age. It’s terrifying theme tune, cardboard sets and weird monsters kept us hiding behind the couch for many years.

When I first heard that this had been accepted by LEGO as an idea, I wasn’t sure what their take on this would be. After all it was not the first time a set like this had been submitted only to be rejected at the last minute. Not to mention the fact that LEGO had already been down the time traveling path with the LEGO Ideas  21103 Back to the Future set.

It wasn’t until it achieved 10,000 that reality set in, could this be real?

In the meantime, other custom Tardis sets had started to raise their heads, some on eBay even showed promise, in fact I went so far and bought one just in case things fell through. The same happened with the custom minifigures including the custom LEGO Peter Capaldi minifigure from Firestar Toys which showed promise. 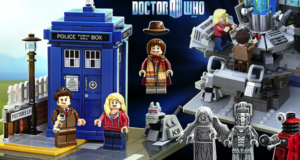 About this time LEGO Dimensions started to arrive on the scene and to everyone’s surprise Doctor Who was going to be part of it. It was then I made the decision, like it or not my daughter was getting the startup kit! Weeks went by and apart from the odd teaser nothing much appeared about the set, though LEGO Dimensions did live up to their promise and released the Doctor Who add-ons.

The game add-on was fuel to the fire, the more you played the game the more excitement grew for the set. Then out of the blue it arrived, pictures of it surfaced and although it was technically not the same as the one Andrew had envisioned it was something most could live with.

Could this be the start of something big?

When finally I got the set off eBay no-less, I was very surprised how small the box was. Was it all in there? But I need not have worried, it was, and although not as big a set as I’d hoped, it had potential.

The Tardis itself was of minifigure size, well detailed and not with using stickers either. +1 for LEGO on that decision. Though it could hold a LEGO Minifigure it was the way you opened it that let it down, kids found it frustrating. 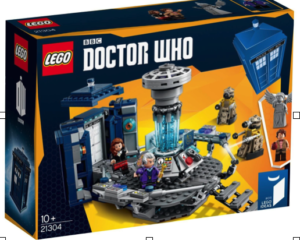 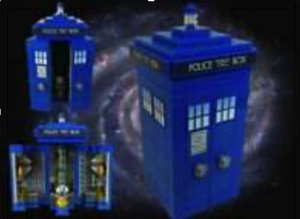 That being said, the console room, though very sparse, had all the right looks to make the Doctor’s adventures possible. Even if you had to keep the Tardis connected to make it look right.

As for what came with the set, Andrew had envisioned a few different options when he first put forward this idea. He had Tom Baker for one David Tennant & Rose for another and finally Peter Capaldi & Clara. Each would have been a great set addition in their own right, but the latter is the one LEGO chose, mainly because he was already shown in the LEGO Dimensions universe.

But to bow to popular demand they also included Matt Smith which to me was a smart move on their part.

In terms of what villains to include, you could not go past the Daleks, not 1 but 2 where included in the set, though not the best looking versions, they were passable. Last but not least LEGO included what I consider the best villain of them all, the Weeping Angel, this had to be the icing on the cake. It even had two faces, what can I say, they finally got this right.

When put together the set had playability, though small it was all there. Kids (and adults) who saw this wanted it (I got 2!) At the end of the day it’s what you make of it and I for one was glad that Andrew put forward the idea.

The documentation that was supplied also gave a history to what this series was all about and to say it was only a UK thing was  simply not true. Fans from India, South Africa,  Canada, Australia, Europe and even the US can disprove this.

The colours of the set were right, and even though more detail on the console probably would have helped, it didn’t hinder it selling.

Now I have heard that people thought it could have been better and yes, I have to agree with them on that part. It could have added sound using a sound brick, just like the Alien Conquest 7065 LEGO Alien Mothership Set. As for lights, that too could have been added, maybe not as elaborate as some I’ve seen but given what’s out there it could still have been included in some form. I also think more could have been done to add movement to the set plus a better way of opening the doors would have helped.

As for adding more sets to this, it should have happened, but for some reason it didn’t.

The fan base at the time was huge and the LEGO Dimensions game gave you only a small taste of what could be, better villains and adventures not to mention different doctors. It was all there. Alas, a few years later LEGO Dimensions has gone the way of the dodo…

Although the set is now retired from the LEGO site, sets are still available from eBay and online shops. They are worth picking up just to say you have a piece of history, the day Doctor Who came to LEGO.