The TV series Firefly first aired back in 2002. Despite being cancelled after its first season the show gained a cult following. The series fan base dubbed themselves Browncoats after the attire worn by members of the Independent Movement. Ultimately, a film was commissioned to enable the creative team to bring the story of Malcolm Reynolds and his crew to a close. In 2005, Serenity hit theatres. Whilst the film was wonderful, it wasn’t an entirely satisfying conclusion. In fact, it left many fans craving more of Joss Whedon’s weird yet wonderful space western. Is it possible fans could get more Firefly in the form of LEGO sets? If so, what sets would LEGO create? What figures would they include?

Firefly featured 9 main characters. For this article, I tried to recreate these characters in LEGO using Photoshop. Unfortunately, I’m not one of the geniuses on FireStar Toys custom figure team. The figures I’ve made are nowhere near as good as what other creators are able to do. These aren’t available for purchase. They’re just photoshopped images to help fans envision what LEGO could possibly create.

Malcom Reynolds, known as ‘Mal’ to his crew, is the captain of Serenity, a firefly class transport ship. Mal fought on the losing side of the unification war, naming his ship after the Battle of Serenity Valley. Mal leads his crew to conduct both legal and illegal jobs. In his heart, he’s a good person and he does good deeds where he can. 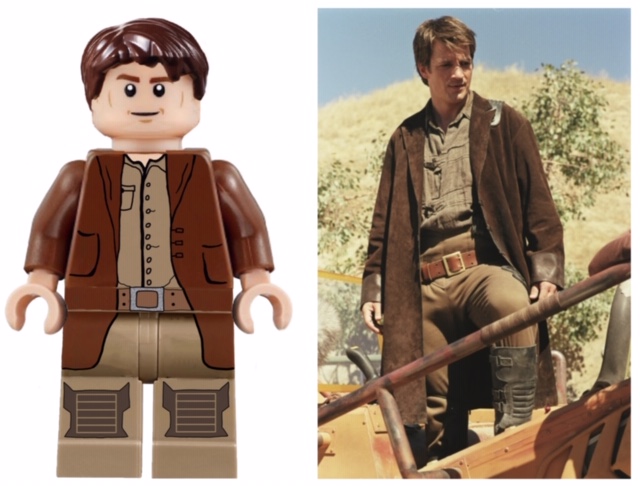 If you wanted to make your own custom Mal figure, you could try using existing LEGO parts. Whilst you won’t be able to perfectly capture the character’s likeness, you can create a  minifigure who’s recognisable. I recommend using Han Solo’s torso and head piece. There’s also a custom torso piece suitable for him. Cassian’s legs and hair would work well, too. 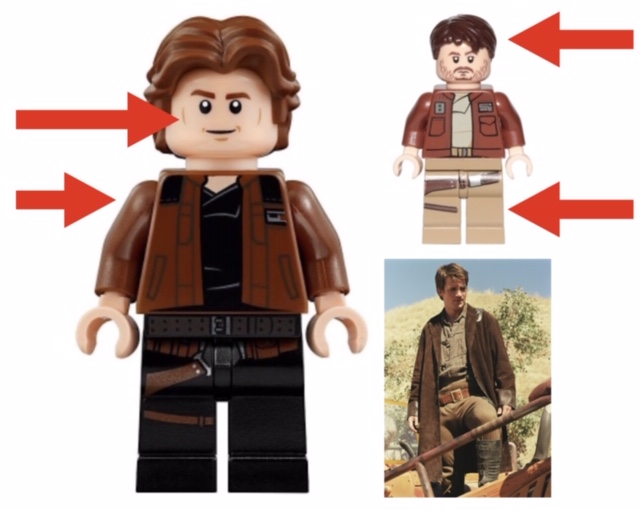 Zoë Washburne is second in command on the Serenity. She is married to the ship’s pilot, Wash. She fought with Mal in the unification war, and is one of the few soldiers who survived the Battle of Serenity Valley. Zoë is extremely loyal to her former Sergeant, Mal. Mal is equally respectful towards Zoë and values her opinion greatly. 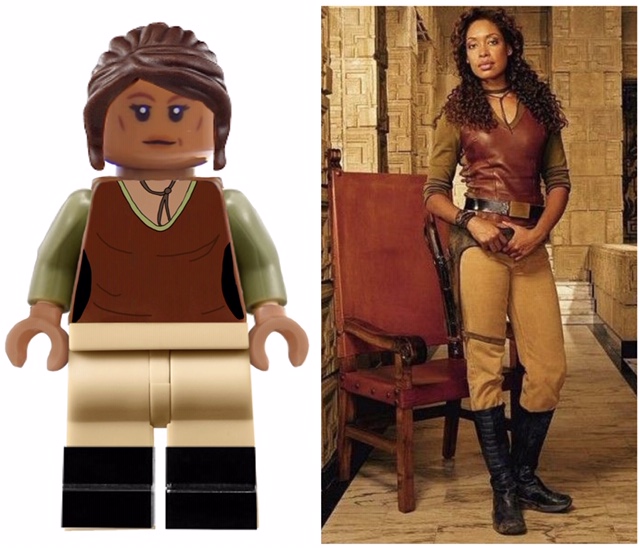 It’s harder to recreate an accurate Zoë figure using existing LEGO parts. However, it is still possible. I recommend using Qi’ra’s hair, Val’s head, and Bistan’s arms. Then use the adventurer leather jacket torso piece and the tan legs with brown boots to complete the figure. 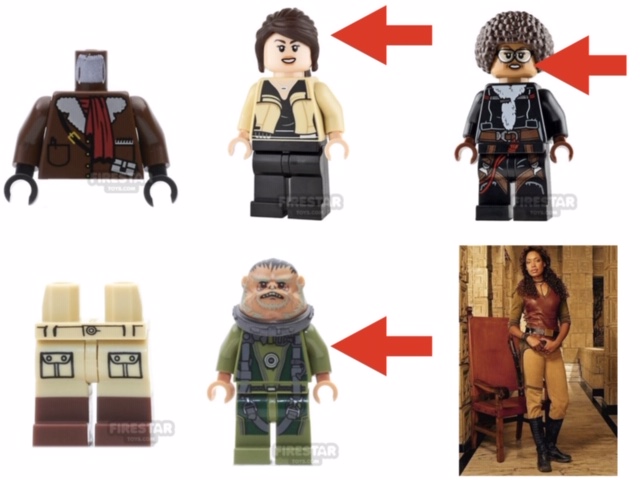 Hoban Washburne, or more simply ‘Wash’, is the pilot of Serenity. He is the loving husband of Serenity’s First Mate, Zoë. When Mal hired Wash, Zoë was distrusting of him (possibly because of his moustache!) But Mal soon persuaded her that he was the pilot they needed. His comedic and slightly childish personality provides relief in many serious situations. 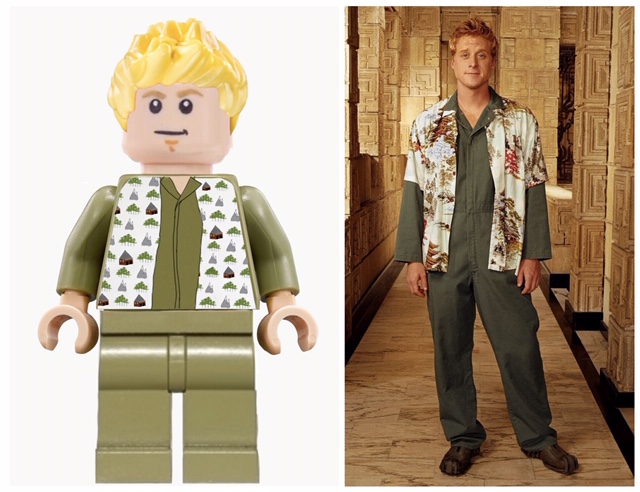 Wash is extremely hard to replicate with LEGO due to the nature of his fairly unique Hawaiian shirts. I think the closest equivalent piece would probably be Danny Nedermeyer’s Hawaiian shirt. Then use Luke Skywalker’s head with spiked tan hair. Complete the figure with a pair of sand green legs. 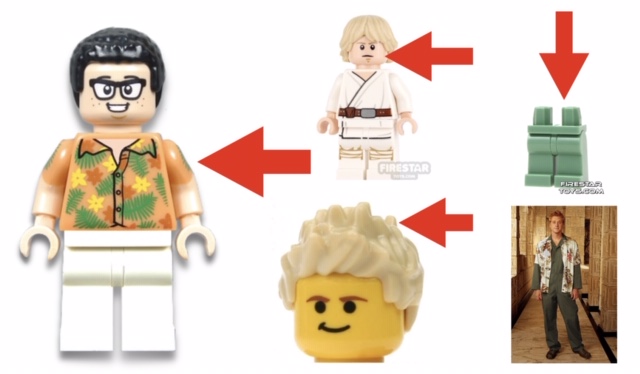 Kaywinnet Frye, known as ‘Kaylee’, is the mechanic on Serenity. She is fiercely protective of Serenity and works tirelessly to keep it flying. Her cheerful personality leads to her making friends wherever she goes. Her room aboard Serenity stands out as the one surrounded by fairy lights. 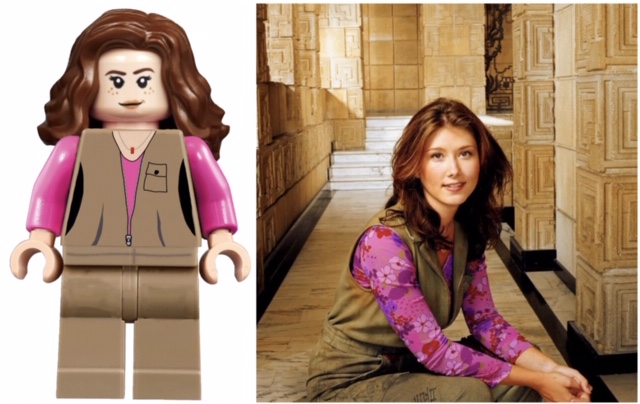 The torso may prove slightly challenging. I recommend Hermione’s head and hair. Hermione’s hoodie piece could plausibly work although the time turner does slightly hinder the look. I recommend you attach the pink arm pieces to Rose’s torso. Then use Rose’s legs to complete the look.

Jayne Cobb is the mercenary aboard Serenity. He is not as loyal to the crew as most. Jayne’s moral compass doesn’t necessarily point true north. He wields a big gun which he christened Vera. 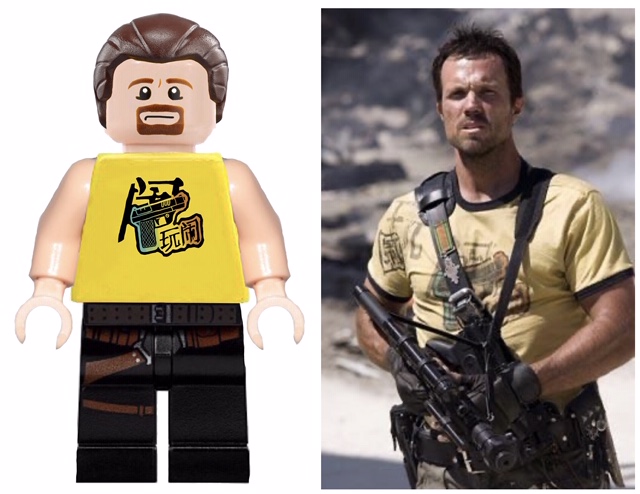 It took me a long time to think of appropriate parts for Jayne. I suggest a plain yellow torso with flesh arms and hands. Maybe a gun holster leg print. I was unable to come up with appropriate head and hair pieces. If you have suggestions, leave them in the comments section below. 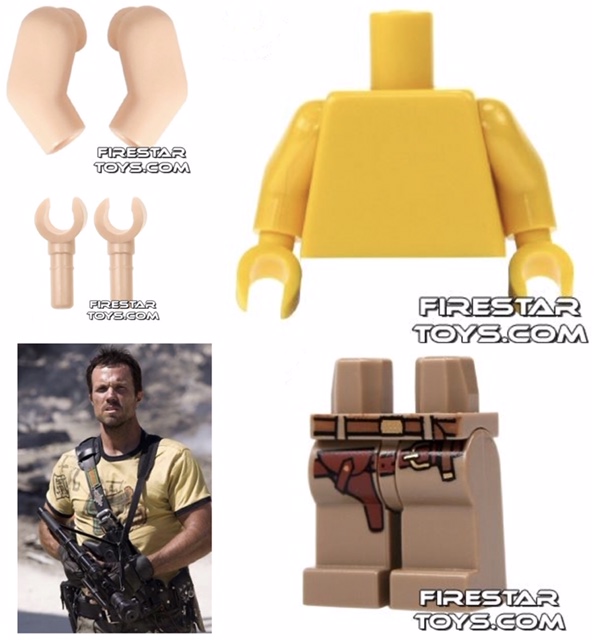 ‘Derrial Book’, or Shepherd Book, is the mysterious religious man who joined the crew of Serenity as a missionary, travelling throughout the universe to spread the word of God. Whilst aboard Serenity, Shepherd Book surprises the crew with his resourcefulness. There are subtle hints that the Shepherd may have had a dark past. 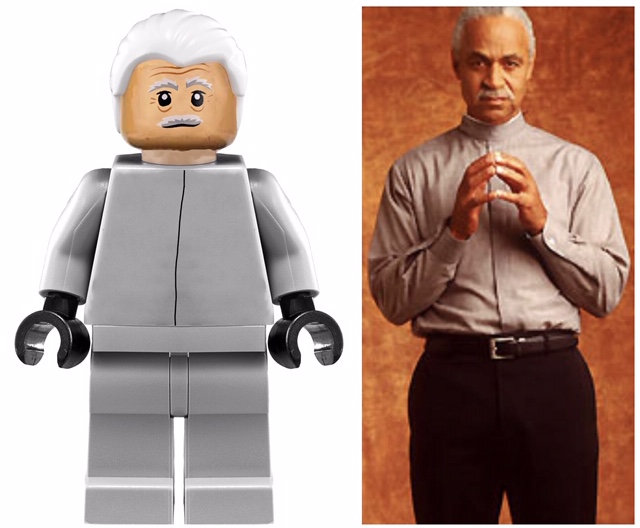 I suggest using an AT-ST pilot’s torso and a pair of plain black legs. The head and hair took me a very long time. Unfortunately, I couldn’t find a perfect face. This grey moustached face was the closest I could find. The light grey hair piece may be an odd choice but I think it could work. Alternatively, you could use the white hair I used in the custom minifigure I designed. 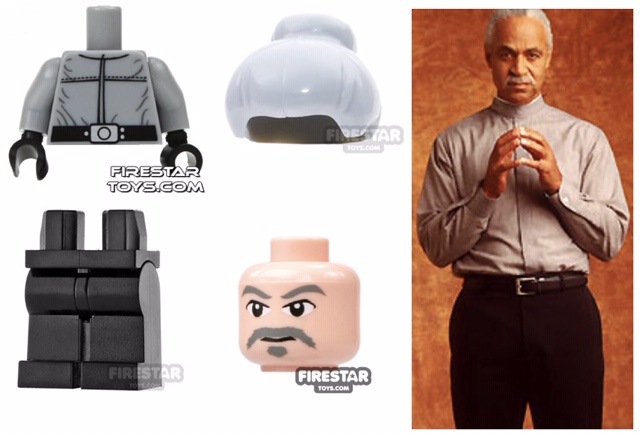 Simon sought refuge on Serenity to evade the Alliance. He quickly became the ship’s doctor and fell in love with Kaylee. He was portrayed by Sean Mayher. 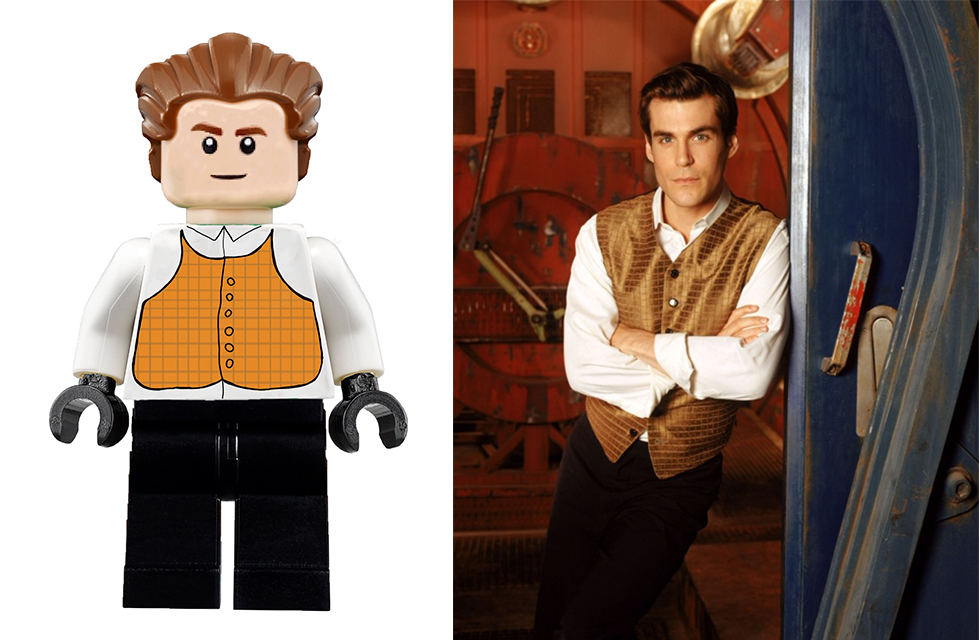 Simon was fairly simple to recreate although I’m not entirely happy with the hair piece I chose for him. 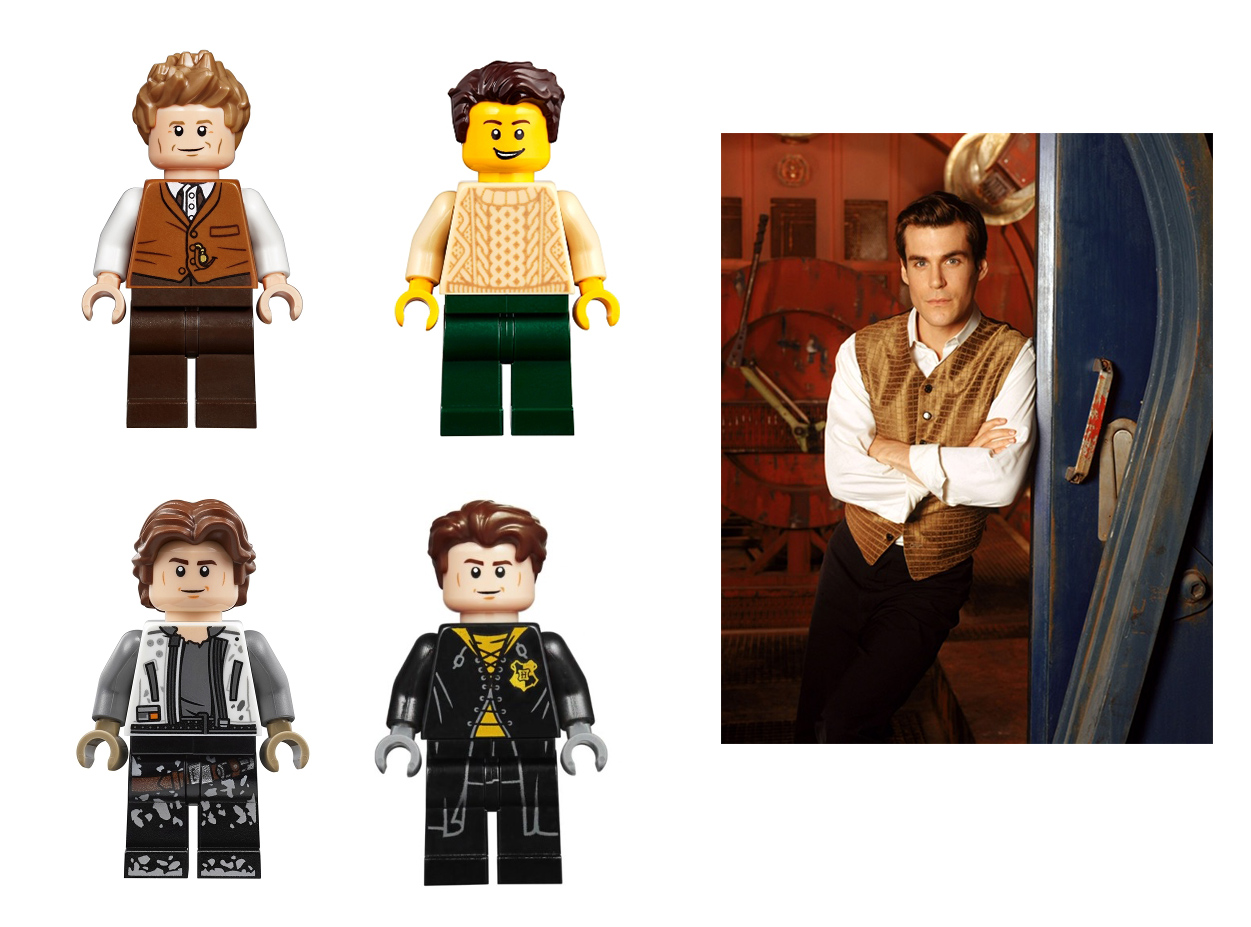 If you want to make him with existing pieces, Newt’s outfit seems spot on. You can use Han Solo’s or Cedric’s head, and even his hair. Alternatively, you can use a swept hair piece for him.

River was Simon’s stowaway sister. River’s brain was altered by the Alliance, turning her into a lethal weapon. She was portrayed by Summer Glau. 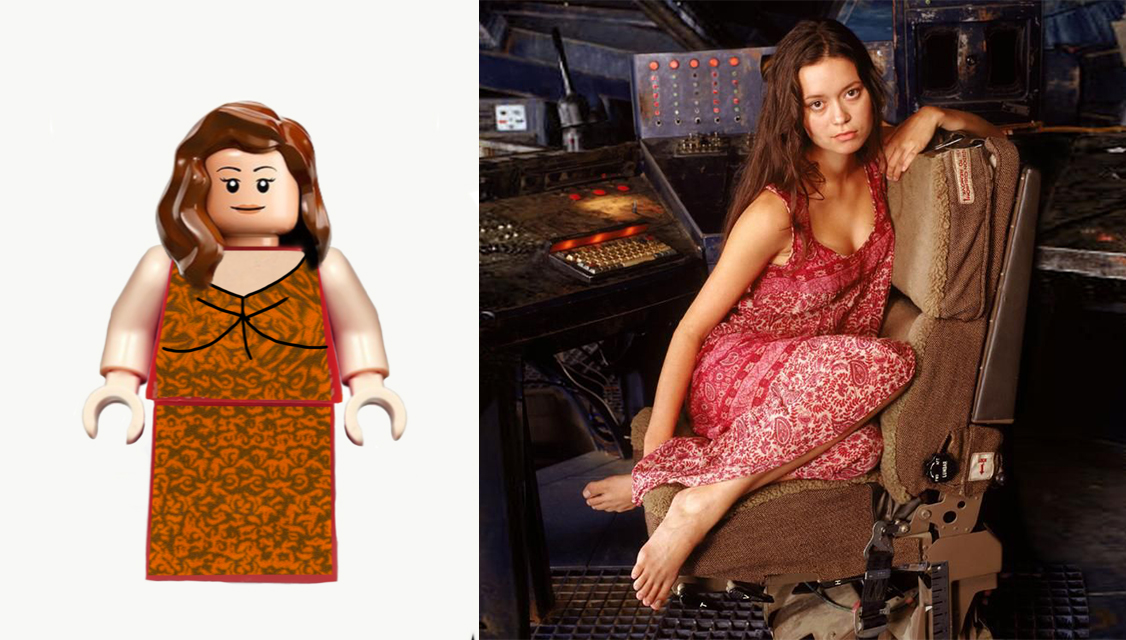 I combined Hermione’s Yule Ball attire with one of Bilbo Baggins’ waistcoat pattern to create her dress. It’s pretty hard to recreate her using existing parts, but Hermione’s or Scarlet Witch’s head along with her hair should be okay. As for her dress, you can either use Willie Scott’s outfit or the mother’s dress from set 80101 with flesh arms and hands. 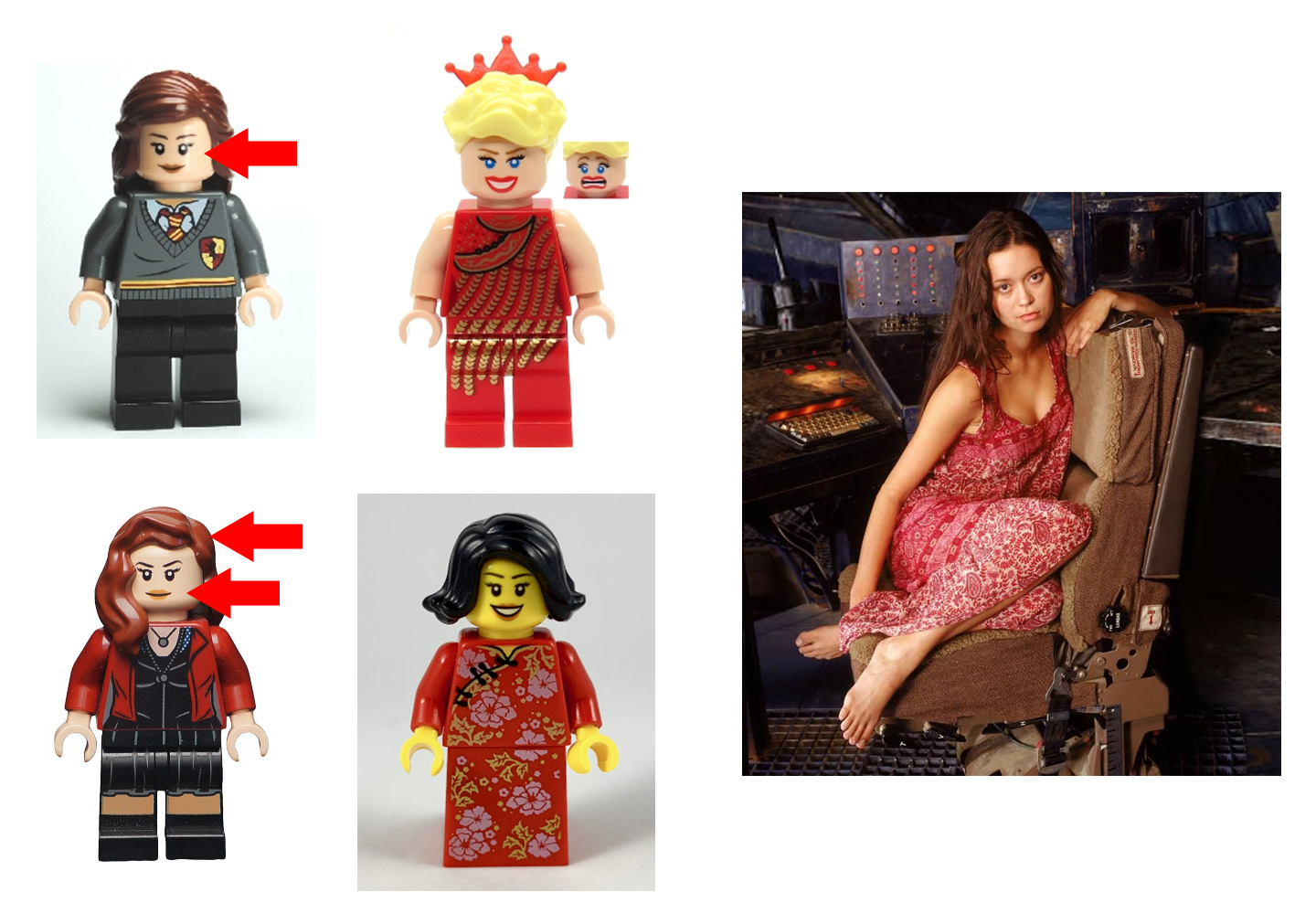 Firefly fans may have noticed one key character that I chose not to recreate. Due to the adult nature of her profession, I chose not to make Innara as I doubt the LEGO company would ever create such a figure.

The obvious choice for any Firefly set would be the main ship Serenity. This is a MOC created by Polyprojcets. It uses a whopping 3,811 parts, only 200 less than the LEGO Death Star (set 75192). If LEGO were to produce a Serenity model similar to this, it would likely cost between £350 and £500. 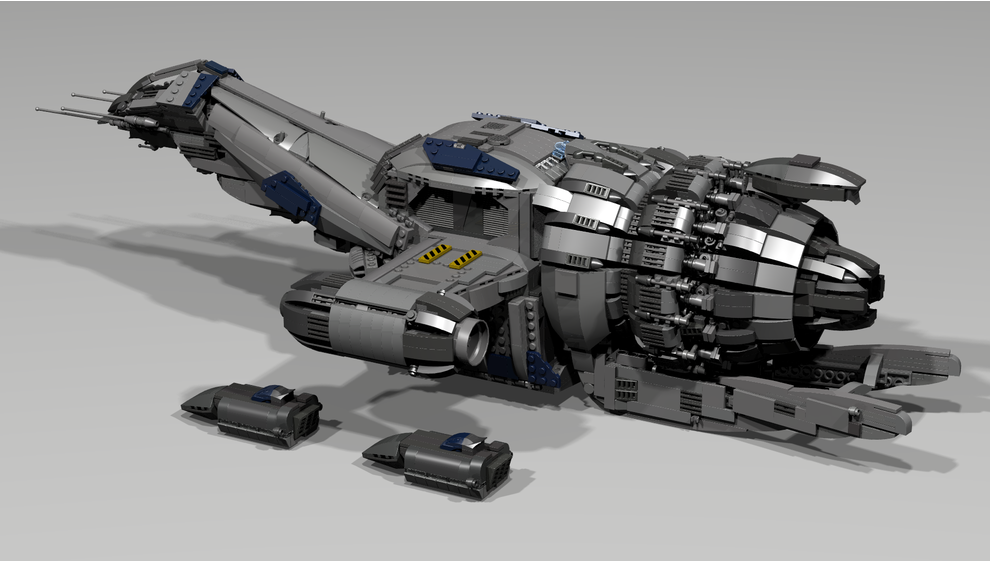 Will LEGO Firefly ever happen?

Unfortunately, LEGO Firefly will probably never happen. Back in 2012, tbone_tbl created a Serenity project that reached 10,000 supporters on LEGO Ideas. However, LEGO rejected the project. They explained why with the following statement:

“We learned the IP was questionable regarding a brand fit, and since we anticipated this project reaching 10,000 the team got a head start and reviewed the project on these criteria.

LEGO produces toys for children. Therefore all LEGO products, regardless of age target, must be content-appropriate for this core audience. With this in mind we have decided that as cool as the Serenity model is, the Firefly TV show and Serenity film contain content that is not appropriate for our core target audience of children ages 6-11. While we know this news will disappoint those who supported the project, we will not be producing this as a LEGO product.”

However, there may still be some up hope for a LEGO Firefly set. Recently, LEGO has started to produce sets based on more adult licenses. It would be a stretch to describe TV shows like Friends, Big Bang Theory or Stranger Things as child-friendly. Now that LEGO is targeting a more adult market, a Firefly set could possibly happen. 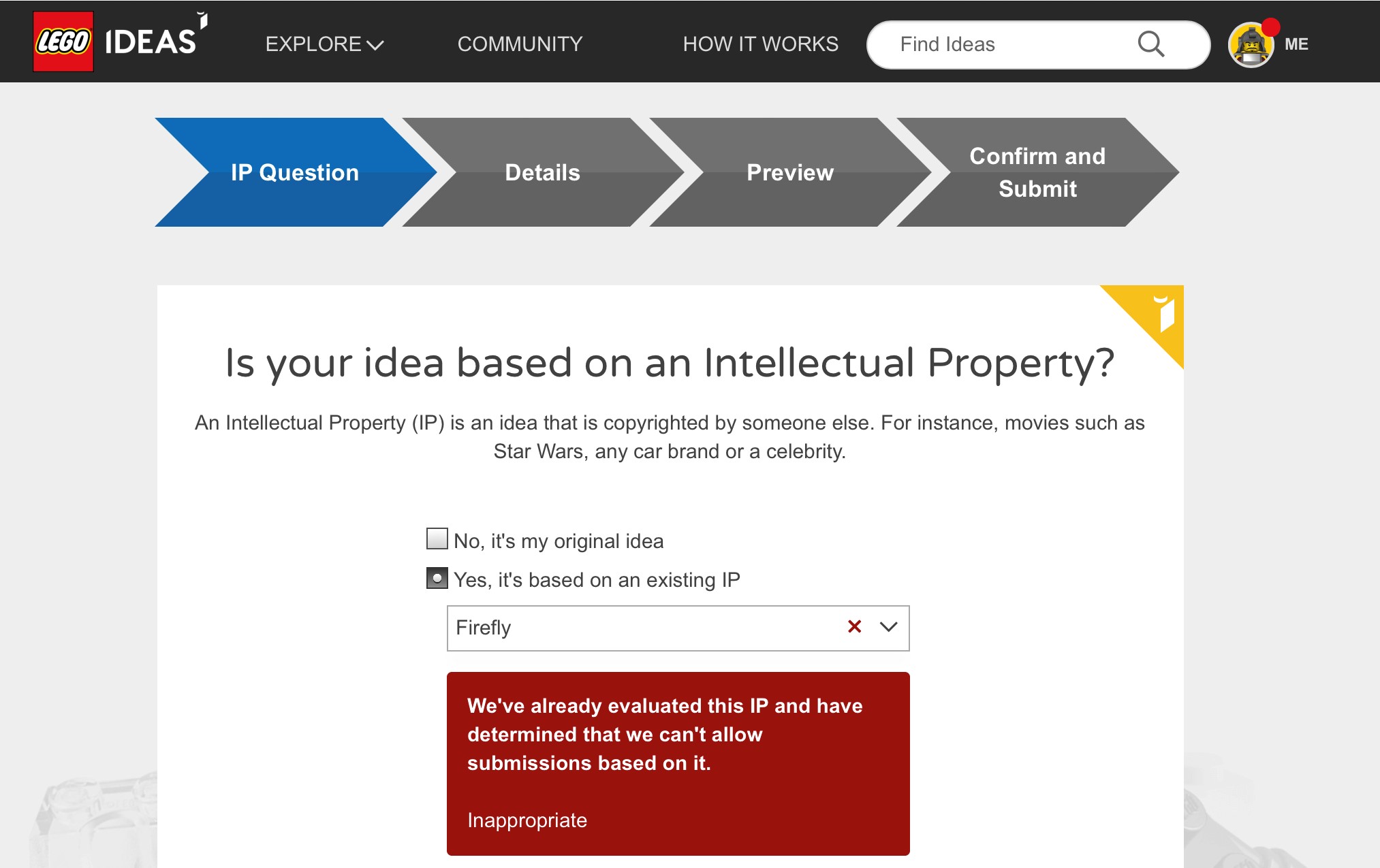 On the other hand, Firefly remains on the list of banned themes for potential LEGO Ideas sets. Still, we can always hope.

Did you love Firefly? Do you want to see LEGO Firefly sets? Please share your thoughts and ideas in the comments section. I’d love to hear them.

The minifigures were made using images from Brickset.

Images of Firefly characters were taken from the Firefly Wiki.

How to Draw LEGO Ninjago: A Quick Tutorial