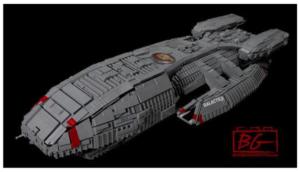 To talk about LEGO Galactica as a theme is to talk about something I’d hoped would have already been made by now. Instead, many of us are still waiting with bated breath. As it has been a long time coming, and we are still waiting!!! Yet this is not the first time that this subject has touched a nerve as there have been plenty of blogs on the internet written about this series as a theme, but this is my take on it.

What’s LEGO Galactica all about?

In case you’ve been living under a rock  for the last 30 years, this is about a space movie made in 1978 that was then made into a TV series and then revamped in the 80’s, then made into a space soap opera along with yet another few TV movies thrown it & a few spin offs.

You’d think that would be the end of it. It seems that in 2020 they’re remaking it again.

When it first arrived back in ’78, most thought of it as yet another Star Wars rip-off and I think that is why it wasn’t given a chance back then. When the movie was released, it failed at the box office. Its special effects where on par with Star Wars and it even had the same special effect guy, who’s name was John Dykstra to create these, so what happened?

It was a great concept as far as stories go and it should have done much better than it did, even though the villains were clunky to begin with, they got better the more the series evolved. I often wondered if it was because of the subject material or because it might be in direct competition with LEGO Star Wars. Whatever the reason, no LEGO or LEGO Ideas sets on this subject has ever been approved, and that’s saying something. 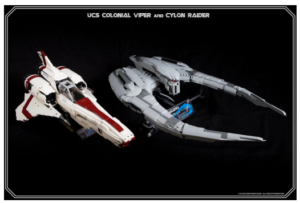 The story was a very different approach to that of Star Wars, in that it was more closer to home. It told the the tale of 12 worlds (named after the signs of the zodiac), which after they are destroyed by a race of robots called “Cylons” (you learn later that the humans created) the last remnants of mankind flee in what ships are left to find a mysterious 13th planet called “Earth”. 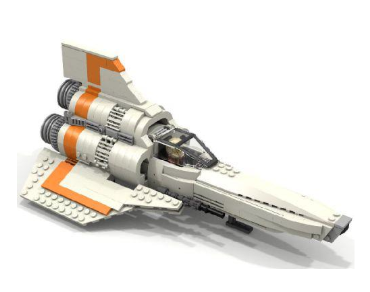 Either way I seriously think that the Battlestar and the many ships it has to offer whether it be from the good guys or the villains have a place in LEGO History. As too do the minifigures, from the old or new series would no doubt offer a good range to collect. Take the colonial Viper for example, there are many various versions of this ship and just like the X-wing from Star Wars, it has improved with age. It’s sleek design gave it swoosh-ability and let’s face it, it looked the part. The same could be said with that of the Cylon Raider, though truth be told, I liked the older one better. It had the ability to hold not one Cylon, but three of these baddies. That in-its-self said a lot.

Which brings me to the soap opera version. This was more a grunge and gritty approach, no clean ships here, everything looked in its place and the Cylons weren’t going to be a pushed over this time.

I remember the first time this was shown on telly, OMG what a difference! Gone were the cheesiness  of the characters and whoa! Did Starbuck have attitude!! It made such a difference! Not to mention, you couldn’t tell Cylon from human this time. The ships themselves had improved dramatically, gone were the straight-edges, this time they definitely had street appeal. So too did the characters which is why I think LEGO sets based on these would target a much wider audience. 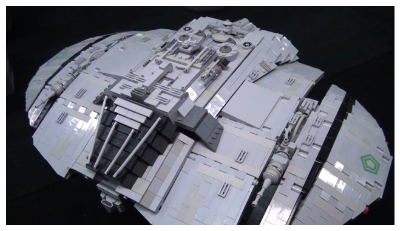 In addition, the story made more sense than just one lot chasing the other. Gone too was the fact that everybody lived, in this one they didn’t.

The Cylons too, had a make over and where split into drone soldiers and 12 lookalikes so it wouldn’t matter if you got doubles buying more than one set. You could make armies of the same minifigures and still not feel guilty. 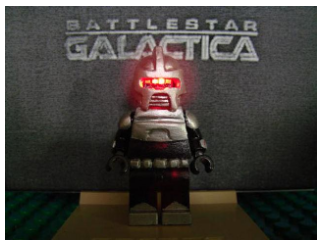 I also came across a few custom versions of these which had working LEDs in them, of which the LED actually moved back and forth just like in the series. This too, if perfected, would be a great selling point. I think this is on YouTube as well. To say this wouldn’t be a selling point is kidding no one, as just for that figure I’d sell my own grandmother!

To give this theme the cold shoulder just because it would cause direct competition with Star War sets is not enough of an excuse, this series has been around the same time and with Star Wars drawing to a close soon especially with it’s last movie fast approaching, it won’t be long before something needs to to take its place. It has a large fan-base and has just as many ships big and small alike, and given half a chance, I’m pretty confident LEGO Galactica would sell.

Like most good ideas, it’s getting LEGO to sit up and take notice. I clearly think they dropped the ball on this when they overlooked it as a theme. The characters too, like Apollo, Starbuck, Adama, Tigh not to mention Baltar and Number Six… These are just a few of the characters to choose from so there would be no shortage of minifigures here to collect.

Some ideas of how LEGO Galactica sets would work 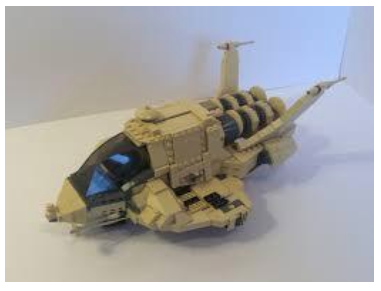 The sets, apart from the smaller ships, could include some of the missions to find clues to Earth as well as rooms of the Galactica itself. Each clue included in the LEGO Galactica sets could hold a tile with a partial star map showing the way to Earth. Collect them all and you find home, simple as that!

The 12 hidden Cylons could also play a part, as you’d need to find out who they are first. Okay, so you’d already know them if you follow the series, but the fun would be in which double minifigure was the actual character and which one was the Cylon, after all this would be one way to make the sets more interesting.

These are just some of the ideas that had been kicking around since the idea of a LEGO Battlestar Galactica was first considered in custom sets. You could also, like in Star Wars, have the older series first and build up to the later versions or expand to the newer series like Razor or go into Galactica’s history like Caprica. There is a lot of room to move around here.

The history too, is important as like that of the Clone Wars in Star Wars. It told the story of the Jedi Knights, and Caprica would tell the story of how Adama would become the Commander of a Battlestar as well as how the Cylons turned against their makers.

It’s an interesting can of worms and one in which the designers of LEGO need to seriously reconsider.

If you’d like to read more space-related themes that LEGO should have released, don’t forget to check out this article as well!

LEGO Politics: Every Brick Has a Right to Their Opinion!