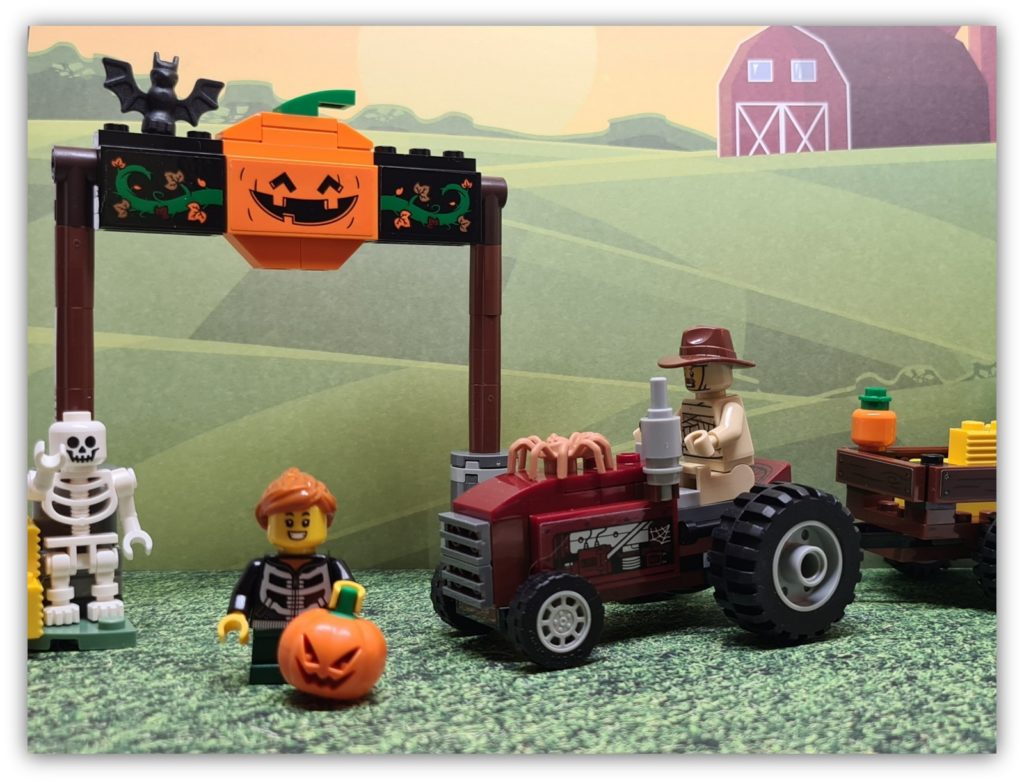 In the UK Jack Frost is now starting to make an appearance, turning leaves from green to brown. But for some, it also signifies THE most magical time of the year; no, not Christmas, HALLOWEEN. In this article, I’ll look at some of the LEGO Halloween minifigures that you might consider helping you celebrate this festival. I’ll also spend a little time looking at the festival itself. So, with torches at the ready, let’s go explore!

Every year, LEGO releases something Halloween-y and this year is no different with set number 40423, the Halloween Hayride

. As well as a simple, but well executed tractor and trailer, it also features a skeleton, a pumpkin head part and two minifigures. 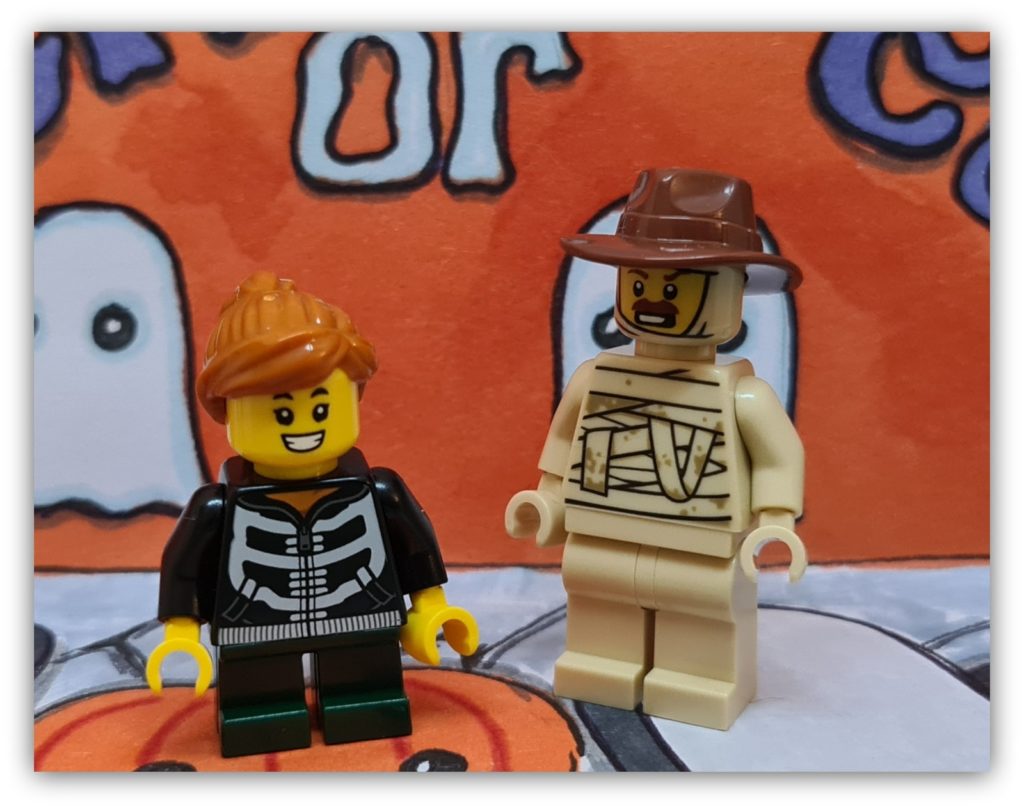 I love the hooded top on the girl and the tractor driver’s slightly grubby mummy outfit; no doubt caused by driving the tractor around the pumpkin patch several times a day in weather that isn’t the warmest. 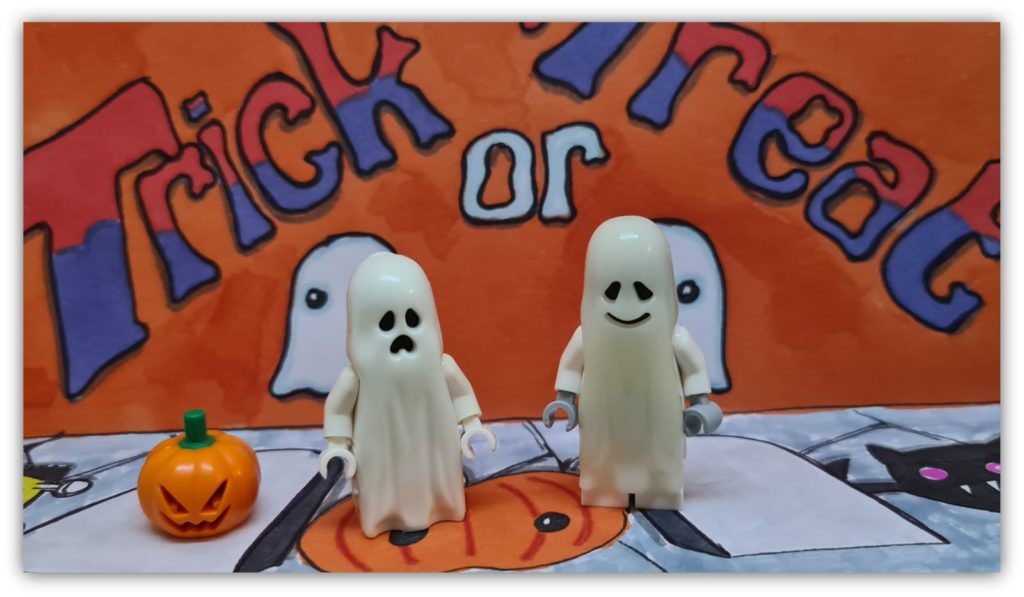 In my figure collection I have a few ghosts. The one on the right was originally released in 1990, which was about the time I got this particular shroud . The ghost shroud on the left is the modern counterpart, released in 2012. Both of these shrouds glow in the dark; and what I enjoy is that both of these figures still glow late into the night!

So what’s the connection between ghosts and Halloween? Well, this part of the year was originally thought to be the end of the year, with the harvest of crops completed and the nights drawing in. It was also when the Celtic people thought that the gap between this world and the next was at its thinnest, allowing the living to speak to those who had passed on but also spirits were able to cross back to right wrongs etc. The idea of ghosts and spirits pre-dates the Celtic celebration too, with references in the religions of Sumer, Babylon and other Mesopotamian religions; and the ability to talk to spirits is also something that occurs in other belief systems too. 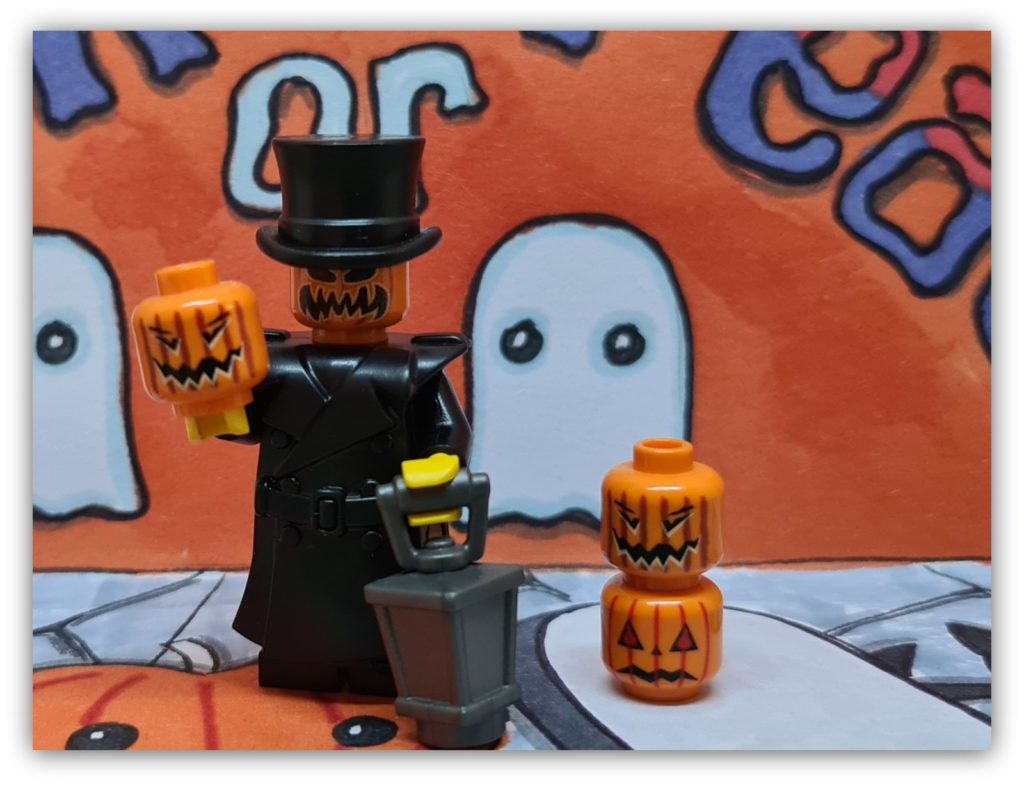 One of the more interesting and common features of Halloween is the carving of pumpkins. The figure above is a MOC (my own creation), using a variety of pumpkin heads, BrickWarriors top hat, BrickWarriors Trench coat and a lantern. Perfect for scaring the devil out of people!

You may have noticed that I called this figure Stingy Jack; it’s this character that inspired the carving tradition. The mythical tale originates from Ireland, where the character “stingy Jack” tricks the devil for monetary gain. When Jack died, God wouldn’t let him into Heaven as he had been deceitful and of course the Devil was still miffed with Jack so wouldn’t let him into Hell either. Consequently he was left to roam the Earth.

To keep Jack’s spirit from coming into people’s houses, householders would carve faces into turnips to scare him away. This is where the term ‘jack-o-lantern’ comes from. When the Irish emigrated to America, they continued this tradition although instead of turnips they used pumpkins, being native to the region. 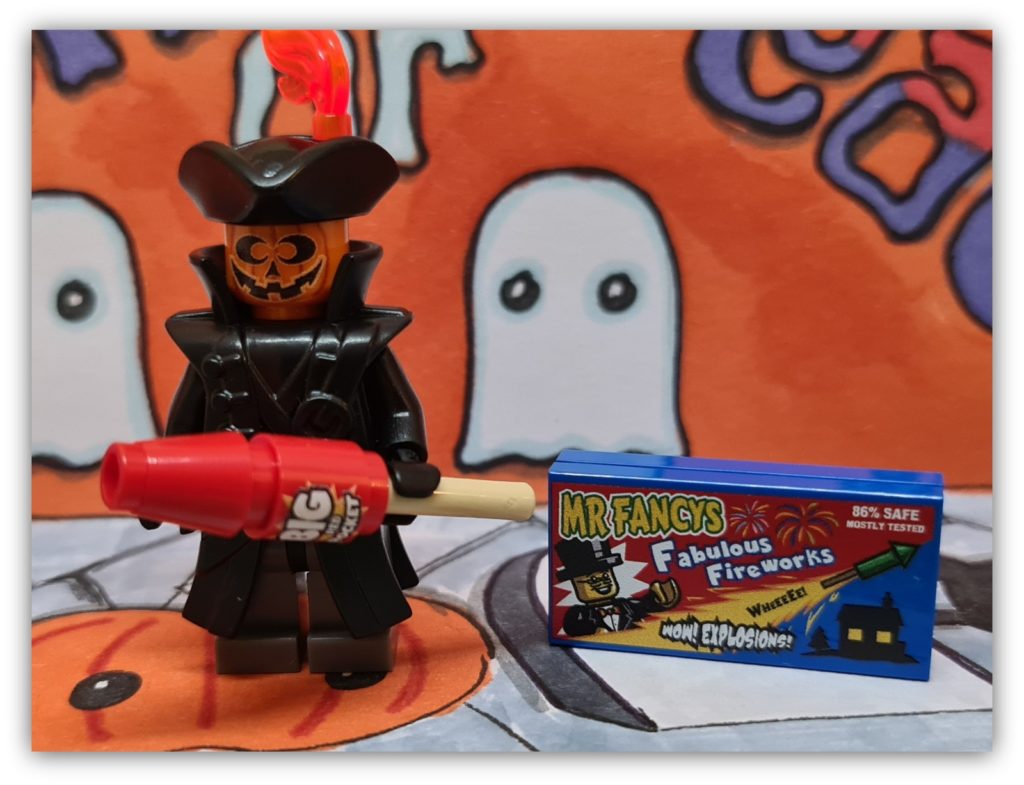 This figure wears the BrickWarriors Pirate coat. He also carries a Big Red Rocket and can get some more fireworks from Mr Fancy’s box of Fabulous Fireworks.

I’ve included the fireworks because the end of October isn’t the sole preserve of Halloween. There are other religions and belief systems that have festivals around this time of year. October 22 is the Hindu festival of Durga Puja; a celebration of the Mother Goddess; and the victory of the revered warrior goddess Durga over the evil buffalo demon Mahishasura. On October 25 is the festival of Dussehra / Vijaya Dashami. This commemorates the victory of Lord Rama over the ten-headed demon Ravana and is celebrated with fireworks and bonfires that and the burning of the figures of Ravana, Meghnada and Kumhakarna (source: reonline.org.uk).

Additionally, in the UK, November the 5th is also a day of thanksgiving. This isn’t a religious observance, but a celebration instigated by the British Parliament in 1606 to mark the failed Gunpowder plot of 1605; the attempt to blow up the Houses of Parliament and in doing so assassinate the new King James I. 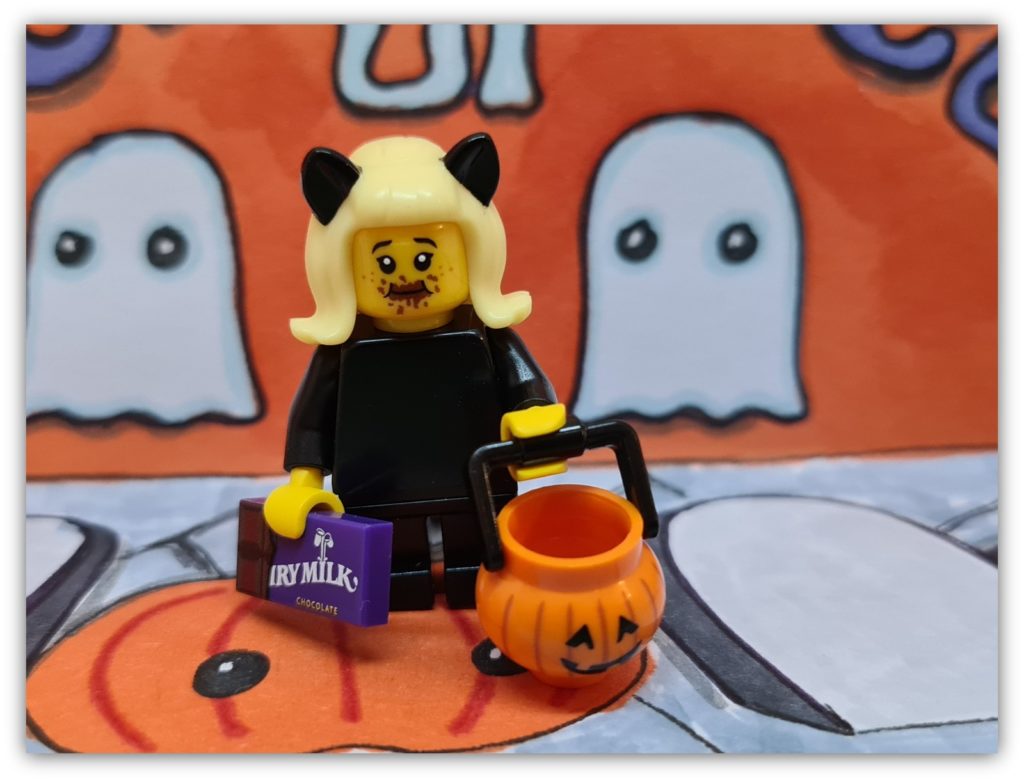 How cute is this Trick or Treater? With her face already covered in chocolate, it’s a good job her outfit is a plain black colour because I bet by the time she gets home a good proportion will be either in her or down that top!

Depending on who you are and where you live, this part of the Halloween festival is either liked or loathed. But its history is in itself quite fascinating too, dating back to the Middle Ages. Young people would take part in a thing called “guising”, which ran alongside another activity called “souling”. Souling was when groups of poor people would knock on the door and offer to give prayers to the householder’s departed family in exchange for food. This food would typically be a baked item called a ‘soul cake’. With guising, young people would sing a song, recite poetry or perform a trick in exchange for food, money or beer. These young people would often dress up in a costume.

These celebrations were also taken across when the Irish emigrated in the 1840s to escape the potato famine; around the 1920s, though, the pranks started to become more common. This escalated into vandalism around the 1930s and the Great Depression; it is thought that it was this rise that led to the more organised trick or treating that we know today. 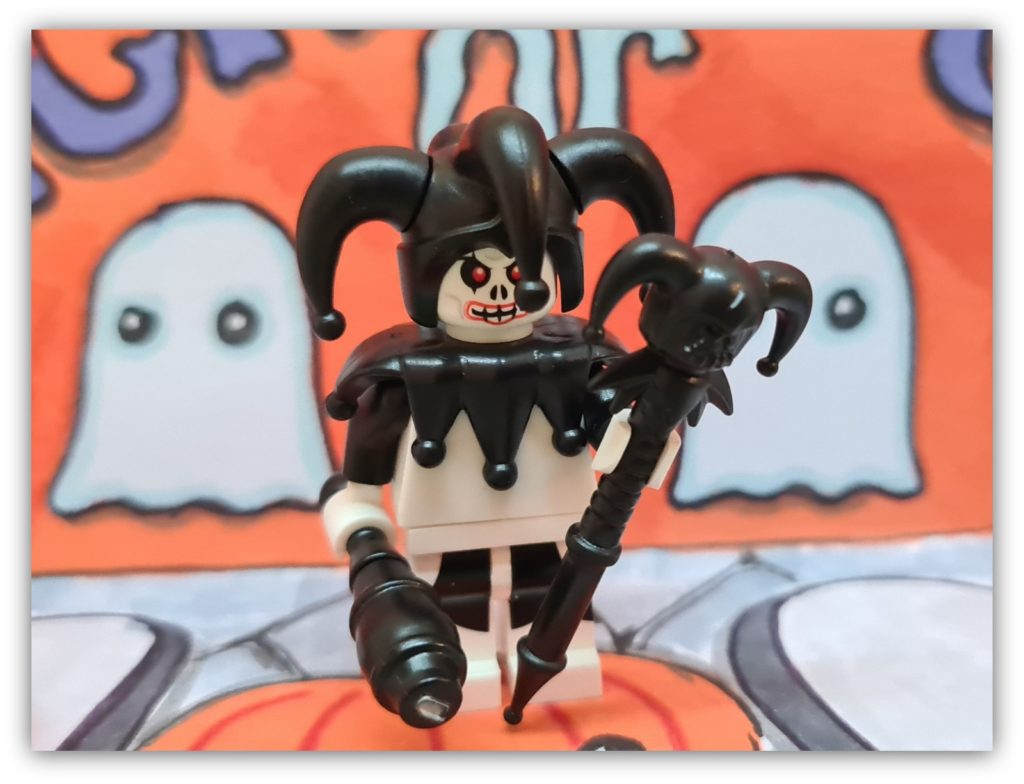 I’ve chosen FireStar Toys Dark Jester minifigure to introduce this section, partly because one main factor of the Halloween festival is that some beliefs will link this date to bedevilment and dark magic; which is why witches are always portrayed with huge cauldrons, eyes of newts, etc. This is an unfair representation which has descended into popular culture (not unlike LEGO is only for children).

In history, the “witch” was likely to be a herbalist, midwife and doctor (as well as psychic for those who wanted to speak to their departed relatives). Their name is derived from the original term of “wise woman”. They would often live on the outskirts of the village which also meant that they could get easy access to wild herbs. But it was the early Christians that sought to get rid of witches; this witch hunt started around the 1400s in Europe, with the publication of the book “The Hammer of Witches” which detailed how to seek and identify witches. Interestingly perhaps, witches were usually shown as red or orange; they only “became” green thanks to the success of the 1939 film Wizard of Oz; which set the blueprint for how witches look ever since.

The Nightmare before Christmas 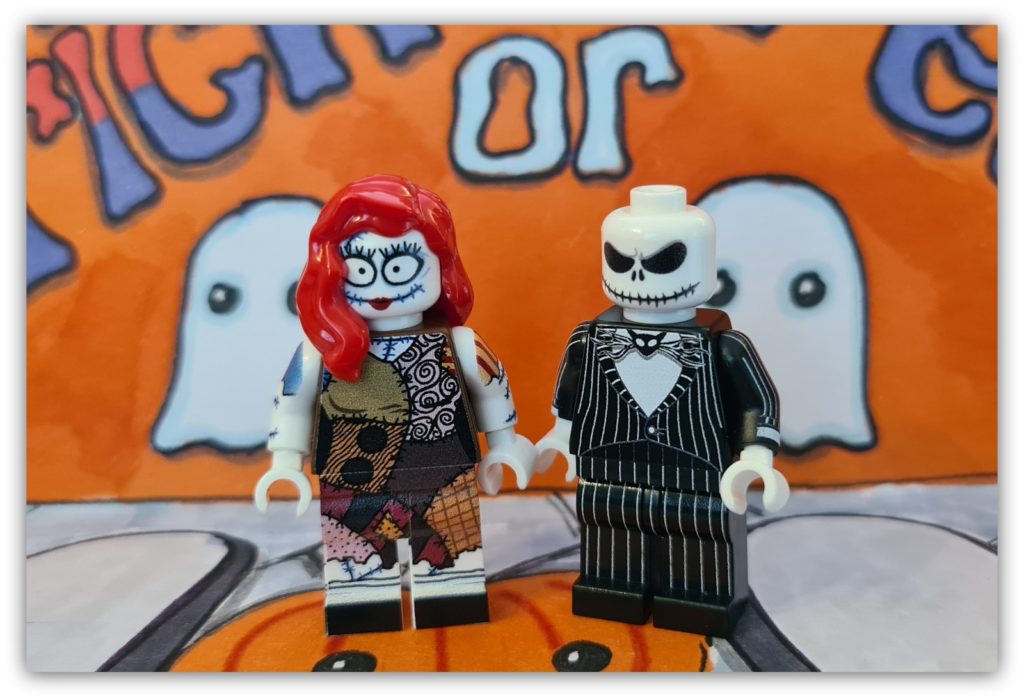 If we’re mentioning films, then the modern cult classic for Halloween must be the Disney Nightmare Before Christmas. Originally a poem written by Tim Burton in 1982, the film was released in 1993. Whilst this was a stop motion film made by Disney, it was released through Touchstone Pictures as Disney executives thought it would be too scary for children. I guess that the surreal Burton imagery was a little too bizarre as well. The picture above is the two main figures of the story, Sally and Jack Skellington. The two figures above are custom figures by minifigures.com, although LEGO did do a collaboration shortly after to produce an official version of these figures.

I hope that this article on LEGO Halloween minifigures has inspired you to if you were planning to have a trick or treating scene in your LEGOscape; and it has also given you some information on the history behind the festival of Halloween. You may also be interested in an earlier article on the Monsters of Halloween or take a look at our Halloween Catalog. Stay safe folks!

How many minifigures are in the LEGO Death Star sets?