Harry Potter books to me was always a good read, and over the years that followed, I’m not ashamed to say, I was one of those who eagerly awaited the next installment to arrive. Dare I say, it came to no surprise that in 2001 when LEGO announced that it inquired the license to turn these books into sets, I and others like me, awaited them with bated breath. It was coming up to Christmas in 2001 when I first saw LEGO Harry Potter sets appearing on the store shelves. They had been based on what the interpretation of the movie was like, and most of them, although a mixed blessing, were in very short supply with their first initial release.

The sets themselves had been made to cover the content of the first book, and in made sense as the movie was due out on the 29th November in Australia that year and by all accounts was a huge success for all concerned. This included LEGO, too, as demand for its merchandise was pretty high, even though it was very much still a UK thing.

There were 13 sets to begin with, Hogwarts Castle being the biggest. 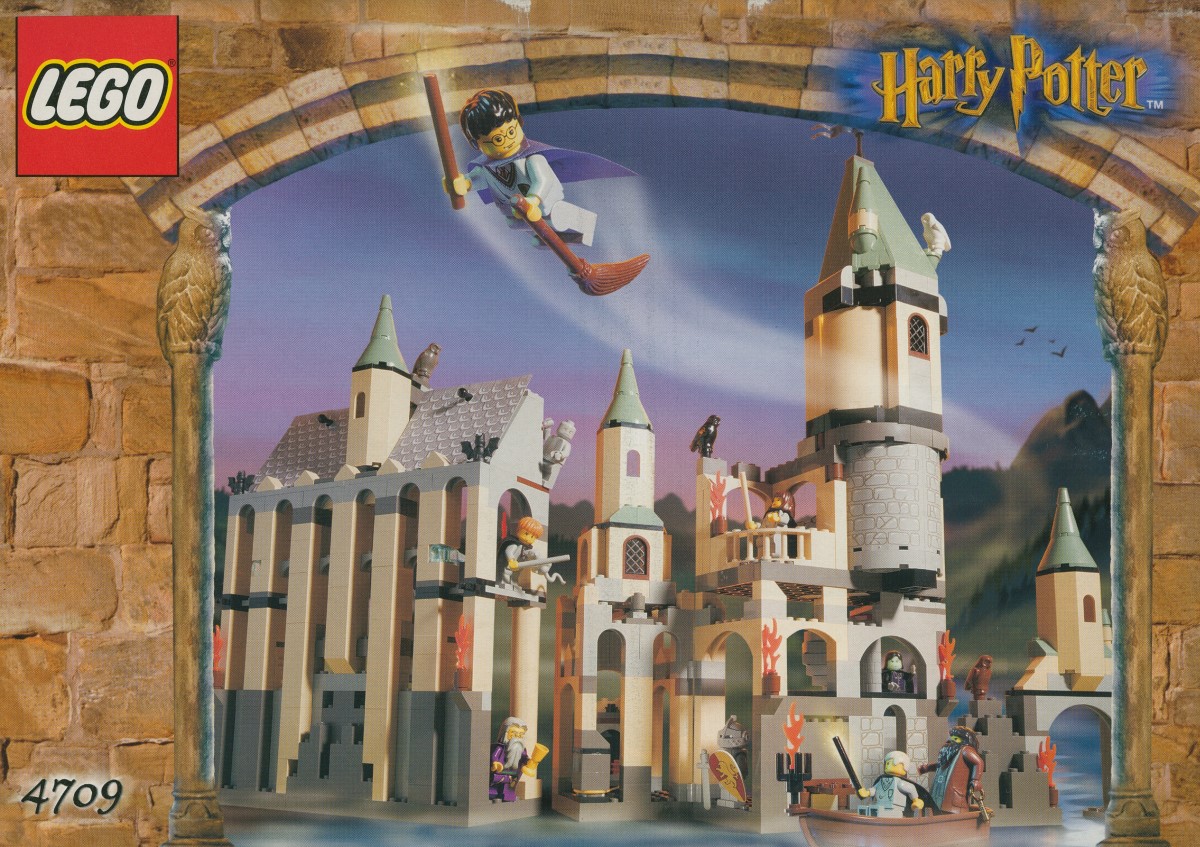 Most of these included a flyer which showed that some way they could be all fitted together to create one larger castle. It was a good marketing ploy and one which pissed off many a parent that year, because as stated, Christmas stocks were very low, so to complete the castle you had to buy all the sets. And this was an impossibility due to the lack of sets available that time.

They featured some sets that in the coming years, have yet to be repeated, which given LEGO’s track record is quite surprising.

Sets like the 4707 – Forbidden Corridor which contained Fluffy (a 3-headed dog, which was especially moulded for the series), or the 4712 – Troll on the Loose which contained a blue troll (even though he was actually green in the movie). 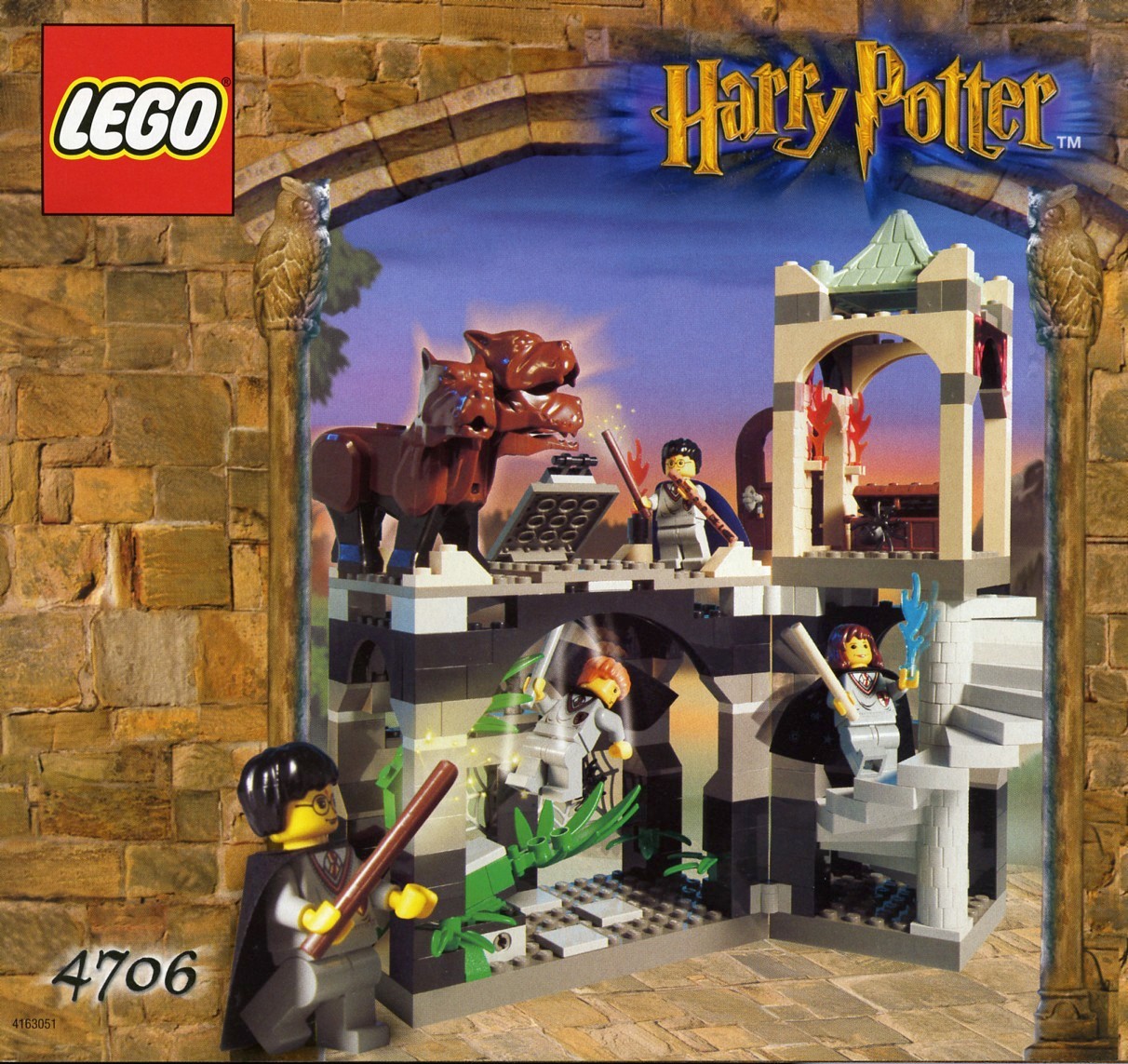 Another set involved a special minifigure which, although appeared in the book, did not appear in the movie, the 4705 – Snape’s Class is a prime example, the figure of Peeves the mischievous ghost was pretty much limited to the first year of sets and did also appear in the Hogwarts castle 4709. 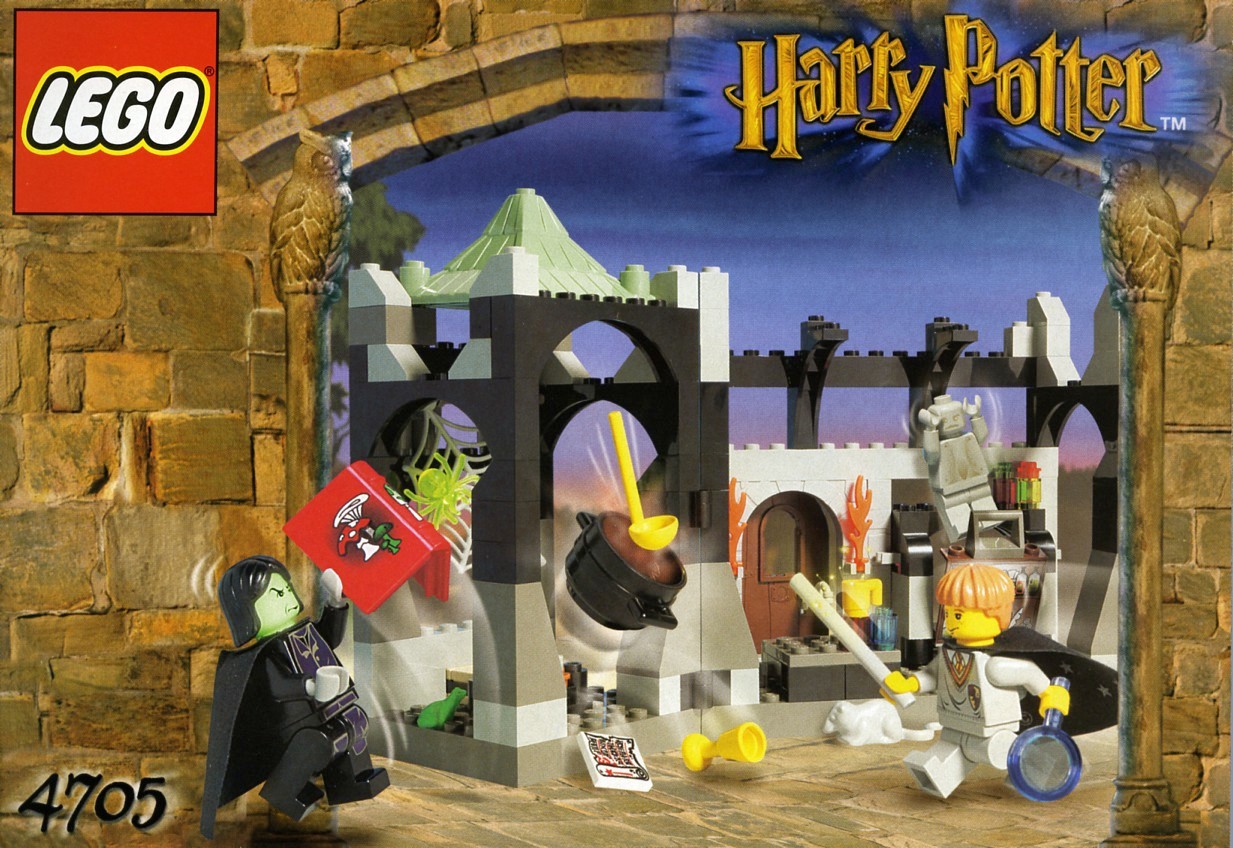 Though the figures were pretty basic at the time, more updated versions followed, sets also released that year were;

These have since faded into memory, since they didn’t prove as popular as the larger sets. However, they are still considered as collectables.

It wasn’t that this theme wasn’t popular. On the contrary, it was the fact that LEGO didn’t release enough to cover demand, and demand in 2001 was extremely high, especially in the US & UK. Here in Australia, though, it was not so well-known. I managed, with a bit of effort, to get all of the sets, but it was not without issues as a frantic call from my sister two weeks before Christmas in the UK and I had to help her out too!

Christmas prices of these didn’t help either, as soon news of new LEGO Harry Potter sets quickly spread and sky-rocketed due to the movie release, many kids lucked out that year.

The following year in 2002, things got much better, the sets, too, got a little darker. They also made up for the year before as shortage of sets was no longer a problem, and most of which kept true to the 2nd book. 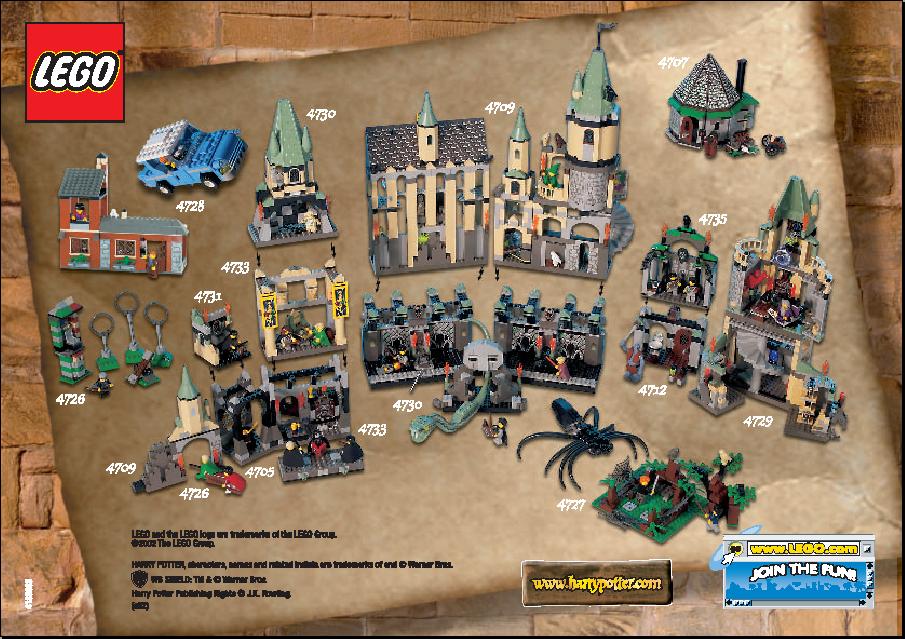 The figures, too, got better as now they came with better heads and more accessories to add to the fun. One of the most interesting things was the little books and new accessories now included in the sets, as a lot of these were quite detailed. Animals, too, got a major work over, a good example of this was Fawkes the phoenix, included with Dumbledore’s office, and the basilisk. These were excellent examples of the lengths LEGO was prepared to go to make these sets work, and work they did.

Not only did the sets sell, but the fact that they added to the original Hogwarts and made it even bigger which now improved its play value. Another factor in this, was the fact that with all the decals on these bricks were printed, none of these were stickers as these were pre-sticker LEGO sets.

Which is food for thought, for those of you who can still remember what these were like.

2004 brought the next wave of sets, and although some of these sets were to make up for the previous years in which many had missed out, some like Hagrid’s Hut, Hogwarts and the train were welcome improvements. Along with never before seen figures, this helped the improve the theme.

With 10 sets in total, this was a much better range of sets and figures. 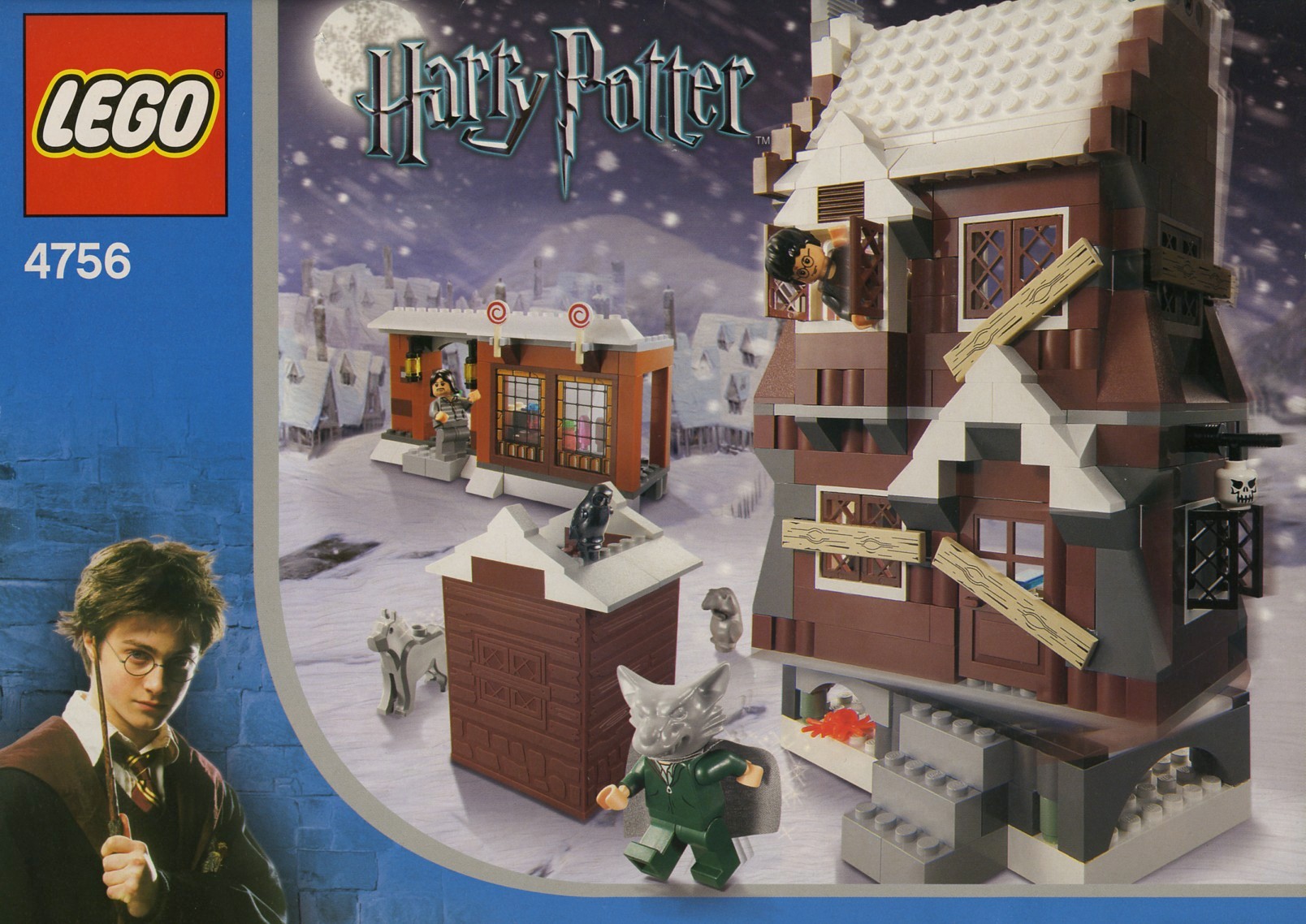 One interesting fact, in the set the 4756 – Shrieking Shack, it featured a special feature brick that could change the minifigure to a werewolf and back again. Ok, it was a stretch, but it worked.

And the Next Wave…

The year was now 2005 and by now interest in LEGO Harry Potter sets had started to slow down. Kids had seen the movies, read the books, and most of which had moved on to better things. Though for the few Die Hard fans collecting these, these sets had made life worth living.

With each new Harry Potter set released, LEGO brought a new remake of an older set, which although is not a bad thing, it also meant that each minifigure released was improved as well, so much so that demand for the older figures swayed and older sets fell out of favour.

This range of sets released in 2005 were 4 in total, and due to the downturn is why only 4 were released that year.

It would be a few years later before LEGO Harry Potter sets would make an appearance again. 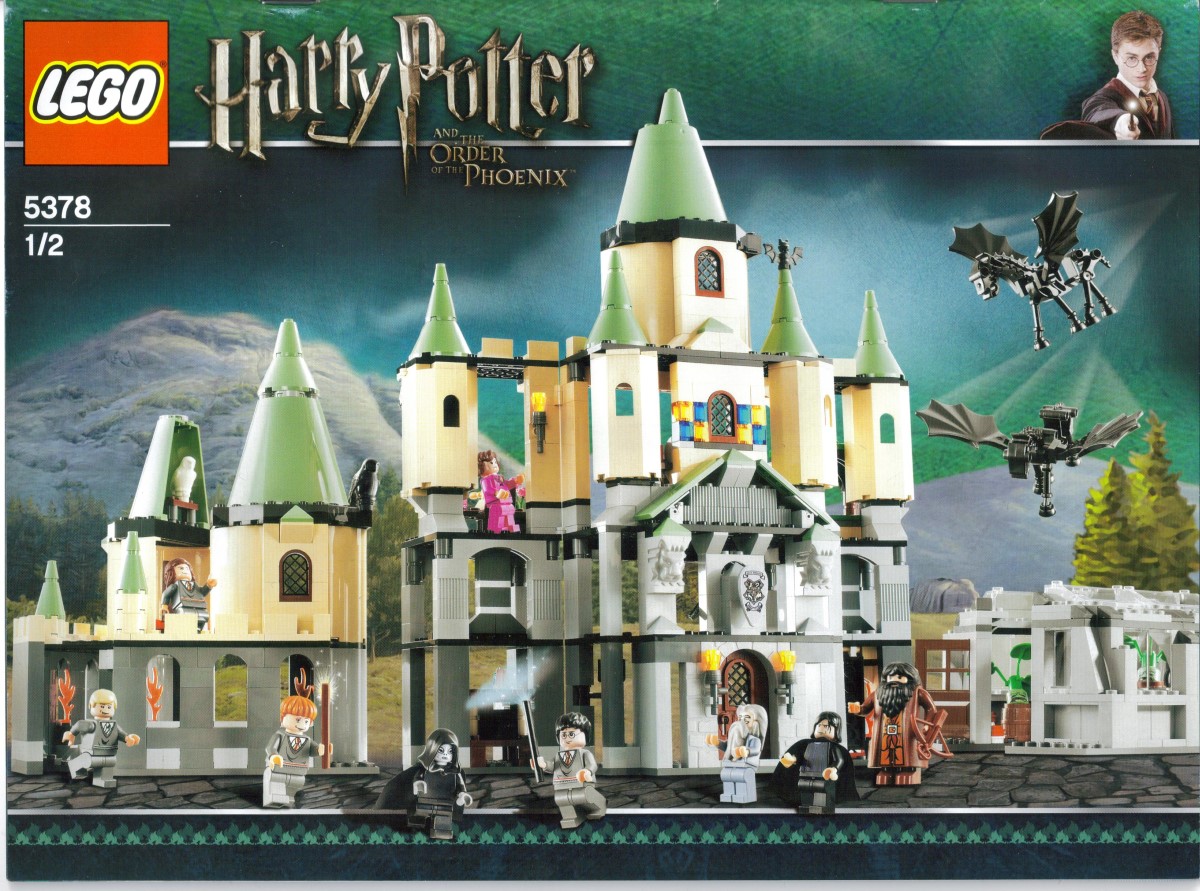 There was only one set in the range. It was the 5378 – Hogwarts Castle, though the set was not without merit, for it included none other than the rarest minifigure Professor Dolores Umbridge.

Although we had seen many versions of Hogwarts before, this had included scenes from the Order of the Phoenix, none of which had been made before. It was a fitting end to the LEGO theme when LEGO decided to give Harry Potter a rest for a while.

LEGO took a long break before making anymore Harry Potter set and it wasn’t until 2010-11 before we started seeing new sets arrive.

But when they did, they had been worth the wait.

At the time, the Diagon Alley set was the Largest Harry Potter set ever created, and took most by surprise. So did the Burrow, with the release of as yet the best minifigure produced in this range, Bellatrix Lestrange. Not to mention it also included Molly, Arthur and Ginny Weasley. 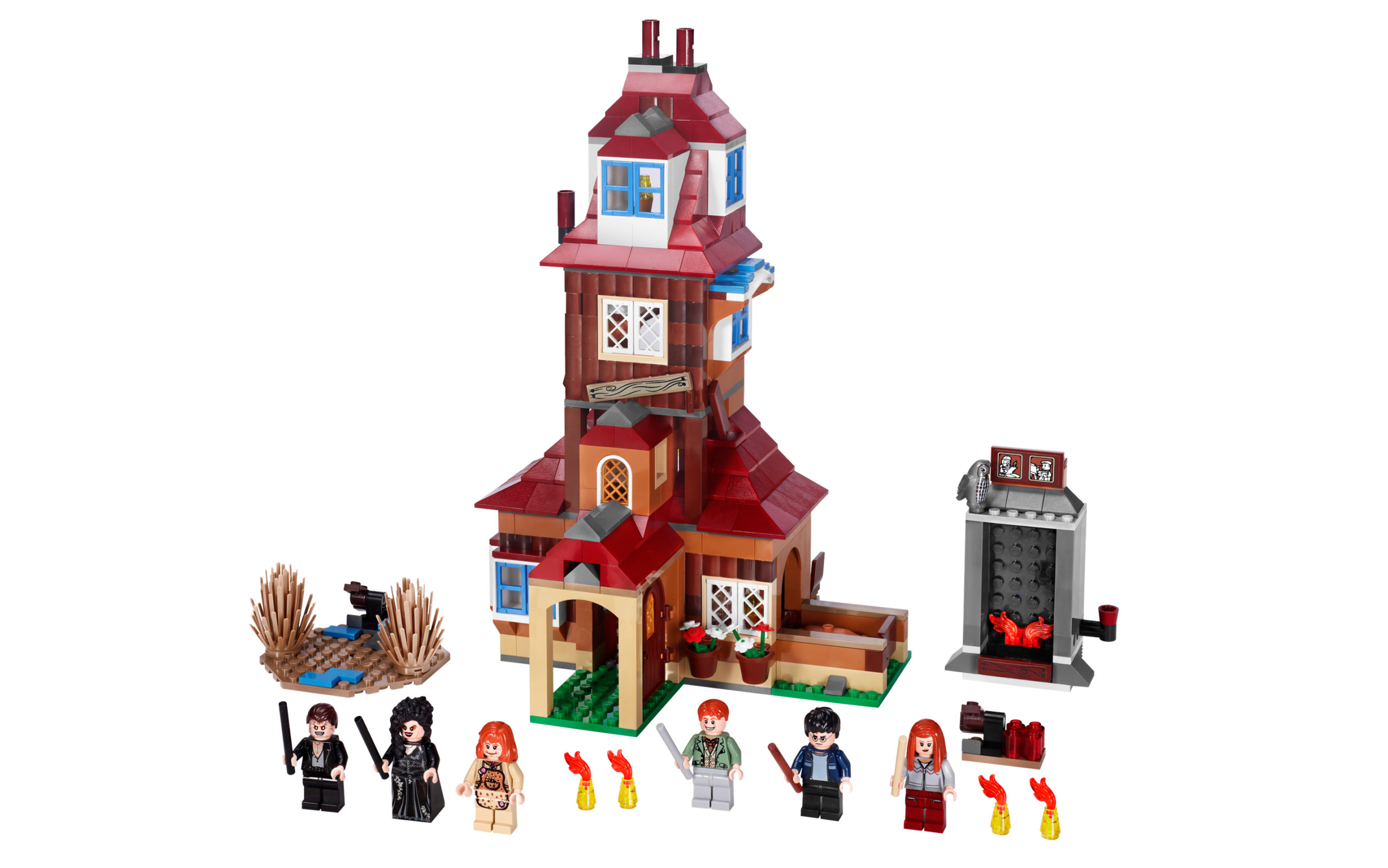 The sets proved just how good LEGO Harry Potter could be and that year the sets put LEGO back on the map.

The minifigures, too, had improved. Long gone were the yellow faces of the older sets, and better printing had improved the torsos. Still, not everything had appealed to the fans, as stickers now had a bigger part to play in the sets and before long they had taken over most of the decals which had been what had made the sets worth getting. Not everyone had been happy about this, and it was now clear this wasn’t a great move for LEGO, no matter how much they were saving.

To say Harry Potter ended on that note simply wasn’t true. There was still a lot of interest out there and after all LEGO still held the license. Its range of minifigures had proven popular in the sets, and with talk of a new direction in the Harry Potter world of movies, it would only be a matter of time before something new on this theme would take its place. And in 2016, it did.

It came in the shape of a movie called “Fantastic Beasts and Where to Find Them”, released in 2016. 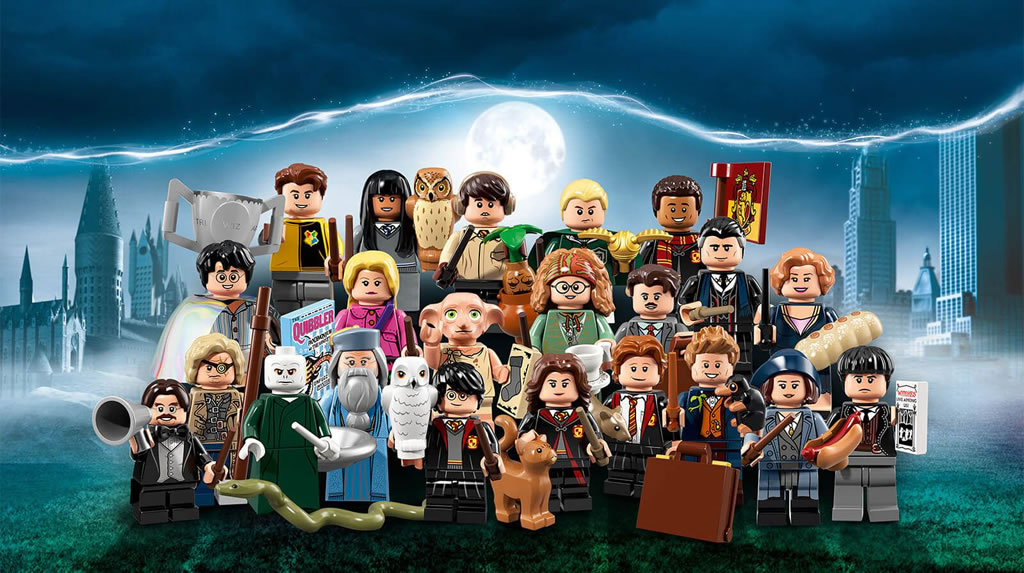 It wasn’t until 2018 that Harry Potter fans got the news that a new range of sets and figures would be showing up. To kick this off, LEGO was releasing a new range of 16 minifigures to get things started and to coincide with the new movie, 8 figures would also be included in this new theme. Unlike previous figures from this range, these would all be revamped, with better printing and accessories, hair pieces etc.

True to their word, LEGO created 16 figures. These were, to date, the best figures of this range. LEGO designers had finally listened to the fans and had looked at what could be done to improve the characters and it was a job well done! Of these 16, Luna and Mad-eye stand out as the best in the range.

LEGO also released a new range of sets to complement these in 2018-2019, the range followed the first 4 movies, which consisted of; 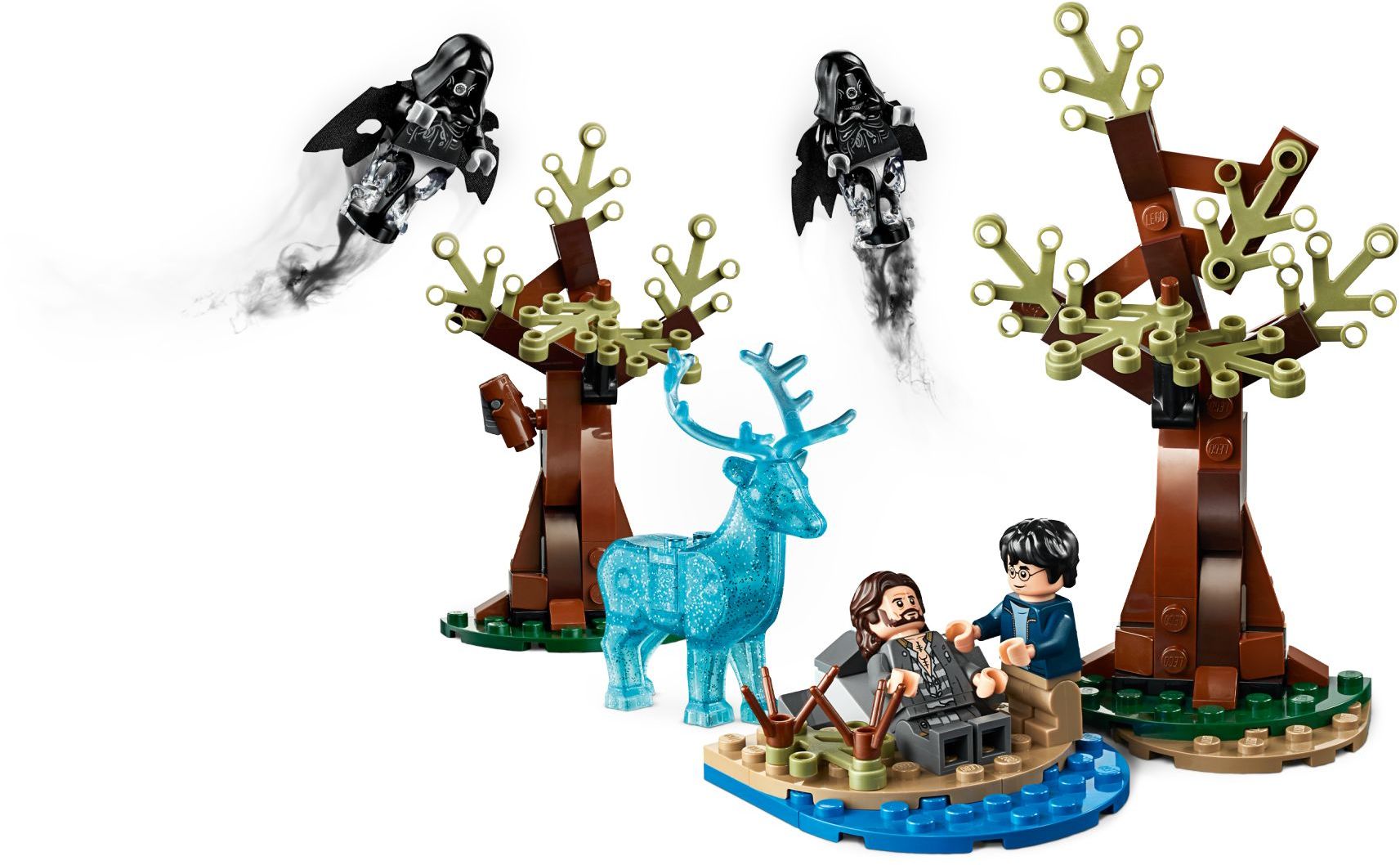 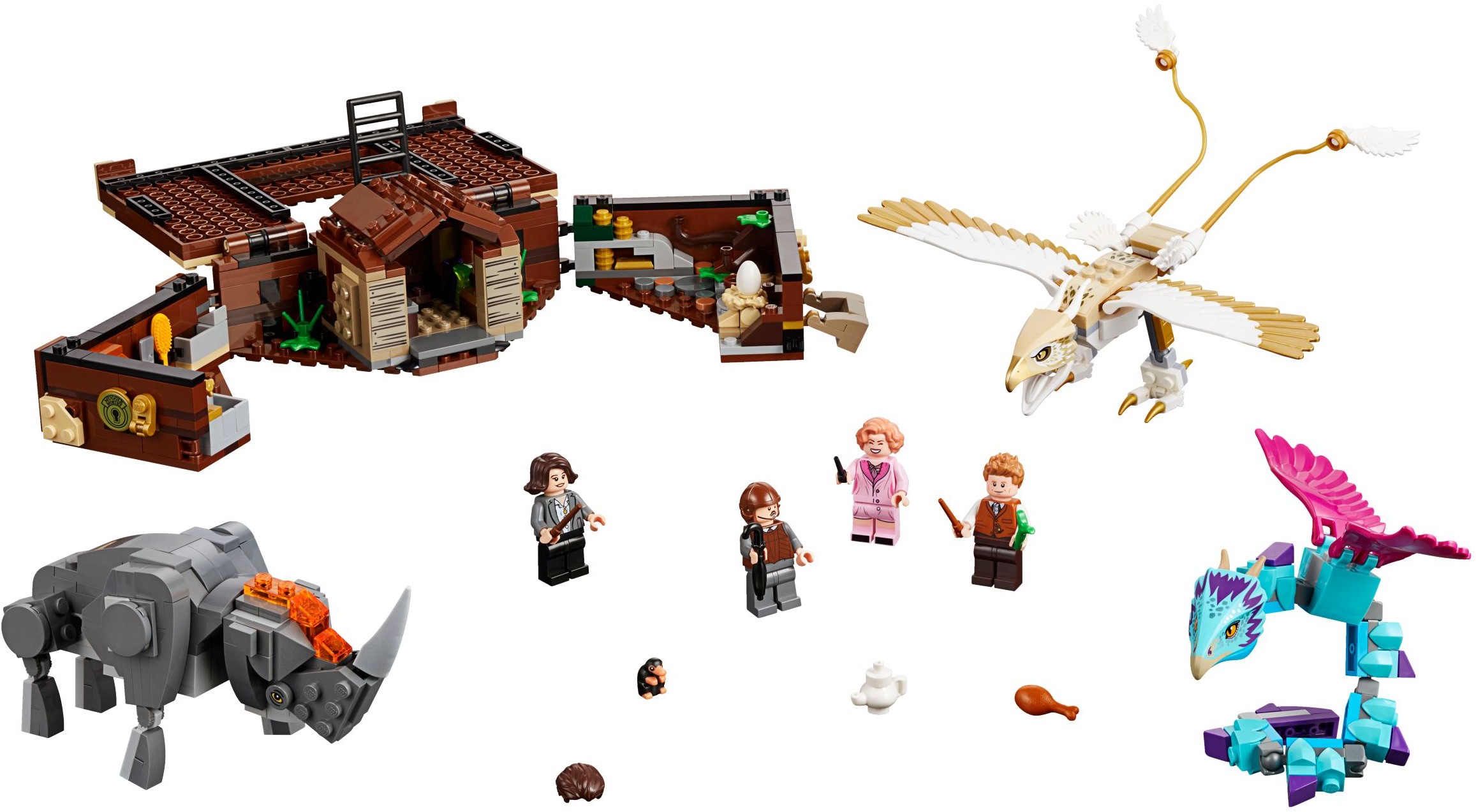 This range was a vast improvement on previous sets before it. The figures were now much clearer and better designed. The sets, too, had improved, and although stickers still played a much bigger role in the design work, this could be forgiven in that it didn’t hinder too much with the building of these.

LEGO also included the feature of adding more sets to the castle to make it bigger, a feature brought over from the older 2001-2002 sets, which brought more playability and interest to these.

The last sets, produced this year included the following; 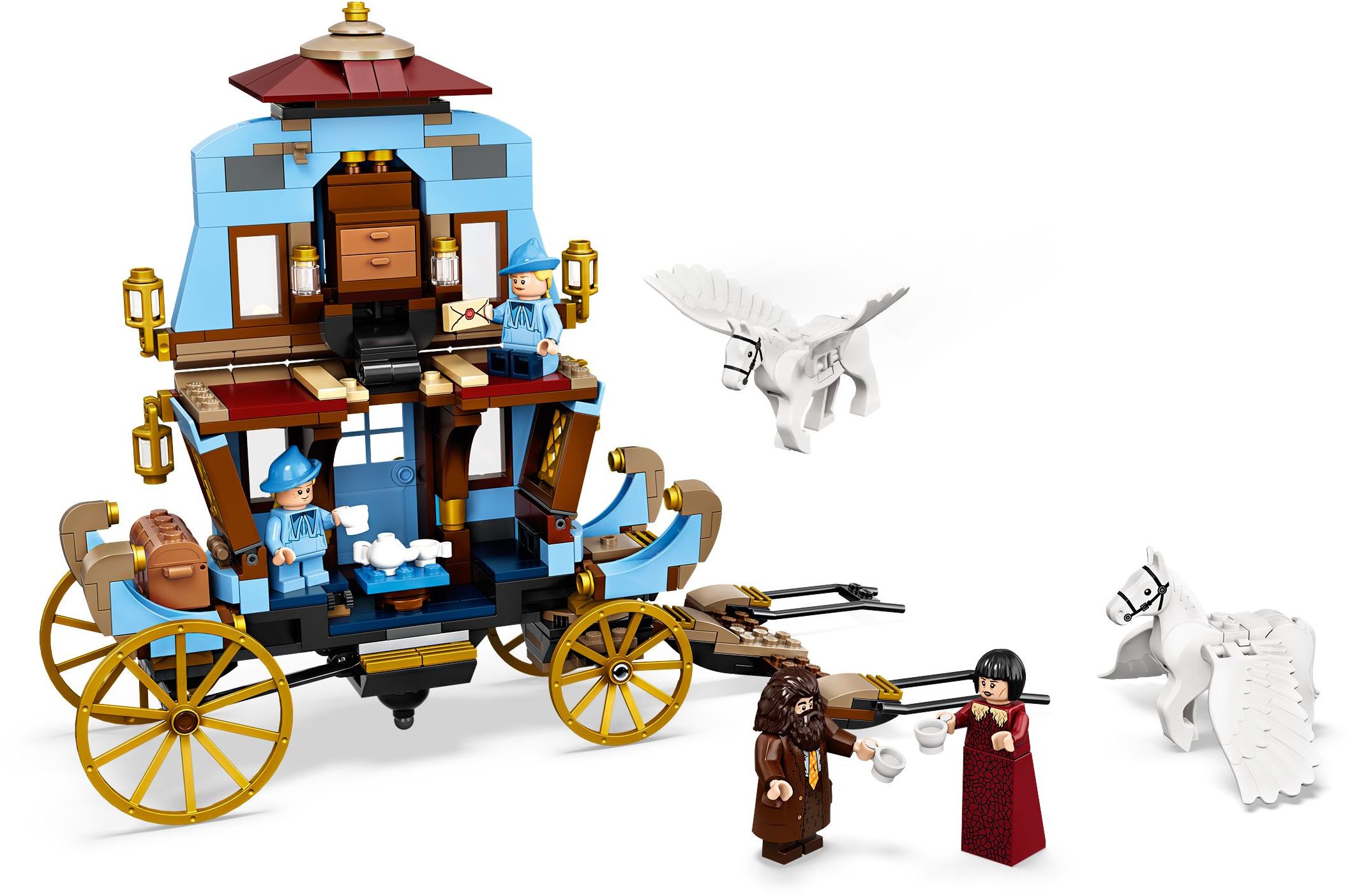 There is speculation of yet another 4 sets to be released earlier in 2020, and that a series 2 collectible minifigure range. Given the success of the first series, I have no doubt these will be eagerly awaited.

I have, for a long time, hoped that LEGO would do the right thing by this series. It seems they are on the right track, but time will tell how long they will stay true to this path.

Till then, keep up the good work!

LEGO Sets to Invest in: Collecting for Profit