A brand new LEGO theme released earlier this year: LEGO Hidden Side. I wanted to take a look in to the spooky goings on in a small town called Newbury. And there is a lot of content to look at.

Normally when I write about sets or themes I would talk about the build experience, minifigures and sometimes a little bit of history. But this new theme from the LEGO Group has a lot of content.

So we have the main sets, build experience, augmented reality (AR) and the mobile app, the story and minifigures, the animation, the box art work and there is also a special magazine released. 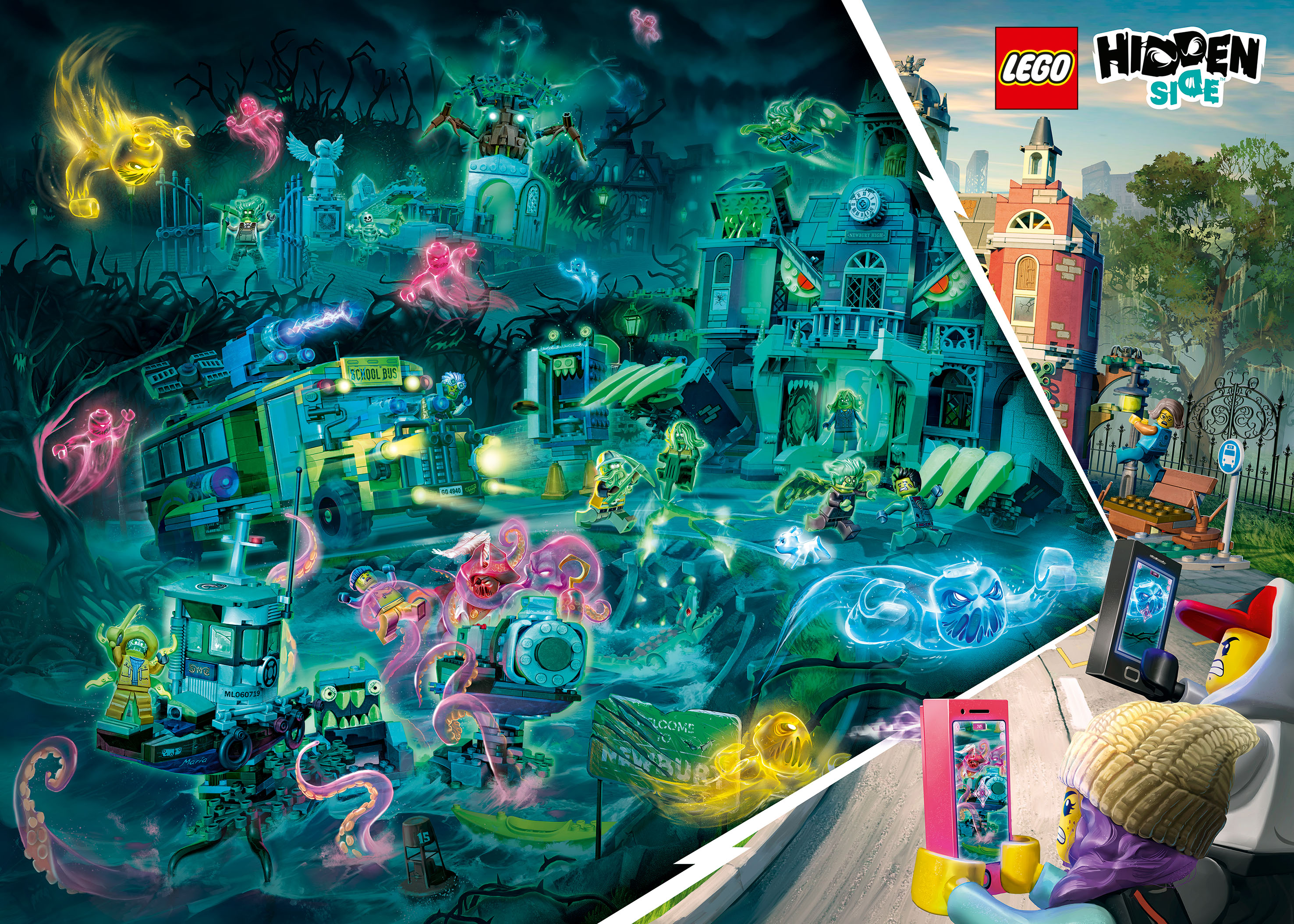 At the moment the story and characters are a little mysterious. The things I have learned are either from the App or from what The LEGO Group has told us. All I know at the moment is that Jack, Parker and Spencer (the ghost dog) are YouTubers who capture ghosts using their phones. J.B. the scientist seems to be the brains and the parent figure in the story. I am guessing now the animation shorts are available I will understand a lot more about the main characters’ personalities and back stories.

So LEGO Hidden Side is a theme like the old Monster Fighters sets. But these new sets have something extra… Augmented reality. You can enjoy with these sets by just building using the bricks and playing with the minifigures or you can download the free application from the mobile app store available on iOS and Android. Downloading the app will allow you to be transported into the ghastly world of Newbury by using your phone to scan the built set then battle and collect ghosts to rid the town and citizens of Newbury of the Gloom.

Now you may be thinking why is LEGO making children play with their phones more in a world where our eyes and hands are constantly glued to some sort of screen. Well, LEGO are simply keeping up to date with the ever-changing technology while still incorporating their lovely bricks.

And as a added side note…

There is absolutely no need for a mobile device to enjoy these sets. LEGO Hidden Side sets are wonderful to build and play with all on their own. In my own opinion the use of AR with a mobile device is just an added bonus.

Two of my favourite things are LEGO and computer games so I was very excited to buy these sets just to see how LEGO could integrate the use of technology in to the LEGO System and I was very impressed.

So let’s have a look at the sets…

The sets give a great introduction of what the town of Newbury is like to explore. Each set has different qualities to them and they all offer a variety of play experiences from the AR side of the set to the alternate builds to show the spooky hidden side of the town.

This is the smallest of the sets at 174 pieces, that doesn’t mean it doesn’t offer all the great things mentioned. It is a great little set, with lots of detail and things to play with like the 3D printing machine (although it will only print some LEGO bricks).

J.B. the scientist has a ghost lab that seems to remind me a little of the Ghost Busters. This lab is the headquarters for our heroes where they keep their captured ghosts. The set reminds me a lot of the Unikitty set Dr. Fox Laboratory (41454) in style as it is more of a playset than a whole modular build.

You get three minifigures and one Spencer the ghost dog with the set, which is great value for money since some other LEGO sets come with less minifigs.

I would recommend this set if you are unsure about the theme or maybe put off by the whole AR aspect of the LEGO Hidden Side sets. It’s more affordable than the other sets, it offers the full AR experience and if you’re not buying for the AR, it’s a great little set and introduction to the new LEGO characters.

Definitely in my top three of favourite LEGO Hidden Side sets, the Wrecked Shrimp Boat is brilliant! This set is made up of 310 pieces and four minifigures, one Spencer and one tan crocodile!

Again I think this set is great value for money. It is a beautifully designed boat that comes in two parts. You can have the boat as it’s wrecked counterpart in two pieces that fit on to the separate rock scape build or you can have it all together like the boat was never shipwrecked.

One thing I didn’t like about the two forms was that the AR will only work with the boat in its full form. So if you preferred to display the shipwrecked form you would have to disconnect the broken boat from the rock build to play with the AR functions. However LEGO have made it easy to do this so you don’t risk braking the build when your playing. (Although if you do, it’s OK… it’s LEGO)

The AR with this set was a bit more enjoyable than J.B.s Ghost Lab because it made the experience more like a little animation. The ghost lab being an interior of a building was static but the boat speeds through the surrounding AR water while your fighting ghosts. For me it added a bit more visual pleasure and made it a little harder to shoot the ghosts with other things moving on the screen. But that adds to the fun!

At 335 pieces, three minifigures, one Spencer and one skeleton. I would say that this set is good but the price range probably should have been similar to J.B.s Ghost Lab, but that’s my personal opinion.

It is a nice little set, again it is made like a playset so you have easy access to all of the areas. If I was lucky enough to get the Ghost Hunters Mansion when it was available years ago, I would love this set just to add more graves and spookiness!

I feel like the designers have given a little nod to the Scooby Doo Mystery Machine set when creating this set. The tree monster on top of the mausoleum is very reminiscent of the tree from the Scooby Doo set. There are quite a few nods to older themes/sets throughout the LEGO Hidden Side which makes me think some children might not have been lucky enough to play with older sets. Did LEGO intentionally include these little Easter eggs in their sets for the older LEGO fan? I do wonder.

At 428 pieces, four minifigures and one Spencer, this set wasn’t on my instant buy list. This is only personal preference since I’m not a huge fan of LEGO vehicle sets unless they are unique like General Mayhem’s Spaceship, set 70830.

However judging by the enjoyment I have had from the other sets I will be buying this at some point in the future.

The car itself looks very cool, I love the colours used for it. The bright red with the hint of green on the stickers go really well together, mixed with the blue of the cannon on top of the car the set just looks brilliantly designed and eye catching.

I think if I were to just get one thing from this set it would be the car and El Fuego the stunt driver minifig to drive it.

This set is my absolute favourite. As soon as I saw the released images, I knew this would be the first set I’d buy.

The set is made up of 579 pieces, five minifigures and one Spencer. Another playset building with an open back to play with the kitchen area of the shack. It is such a detailed set and it is much bigger than I imagined it to be. The 579 parts are well used in this set.

There are three more sets in this awesome theme but since I have rambled on for quite a bit of your time I will let you explore the sets I have written about first!

Look out for a future article about the Paranormal Intercept Bus 3000, Ghost Train Express and the Newbury Haunted High School set coming soon! And remember the check out this article about the more literary side of LEGO Hidden Side!

All images are taken from the LEGO Group

More LEGO Star Wars Microfighters You Have Never Seen Before!