LEGO Ideas set 21322 named Pirates of Barracuda Bay has been revealed last week and all of us LEGO fans are beyond excited! The huge shipwreck set is constructed out of whopping 2545 pieces. When assembled, the set measures more than 23 inches high (59 cm), 25 inches wide (64cm) and 12 inches deep (32cm). The shipwreck holds an ultimate play feature that none of us fans predicted – it can be converted into an actual pirate ship. Not just any pirate ship, it’s a remake of the old 1989 Black Seas Barracuda set!  It retails for US $199.99 | CAN $259.99 | UK £179.99 and hit the shelves on April 1st.

LEGO Pirates is one of the most popular LEGO themes amongst adult fans of LEGO. I’ve spoken to a few AFOLs and they are beyond excited to see their favorite ship from one of their favorite themes being remade in such a cool set. AFOLs hold a special place for the Pirates theme in their hearts because it was the theme that got them into LEGO. If they didn’t have the Black Seas Barracuda, they dreamt of having it. A quote from an AFOL I interviewed: “It was a perfect LEGO set back in the day and I am beyond excited for being able to have that experience of soon building it again with my 2 sons.”

The theme started around the late ‘80s with that, the original Black Seas Barracuda was revealed in 1989, retailing for $109.99 and it included 865 pieces. Another cool thing about this set, that connects it to the old pirates is the box and the yellow stripe off to the side. The design mimics the classic LEGOLAND boxes and the original box for the Black Seas Barracuda as seen below. 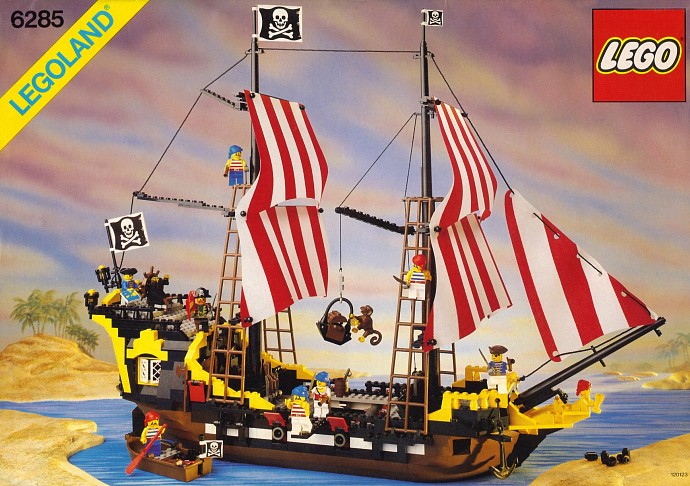 As always, the original designer’s design isn’t the same as LEGO’s, but LEGO kept the same idea. The model submitted on the Ideas site was made by Pablo Sánchez Jiménez (named Bricky_Brick on the Ideas site) and it was one of the fastest ever LEGO Ideas projects to gain the 10000 supporters mark and qualified for an official review by LEGO.

As you can see below, the fan model is significantly darker and has an overall more complete look, but it’s missing the main convertible feature. It’s also missing the sails, it’s significantly shorter and overall has a darker tone. The LEGO designers that redesigned the sets are Milan Madge (product designer) and Austin Carlston (graphic designer) who are both huge LEGO Pirates lovers and were beyond excited to work on this project with Pablo. Milan and Austin made sure that Pablo was okay with every redesign, especially the convertible feature.

The Pirates of Barracuda Bay set includes 8 total minifigures. Each figure has a really creative name. In order (as seen below) from left to right we have: Robin Loot, Lady Anchor, Quartermaster Riggings, Captain Redbeard, Jack Doubloons (nicknamed “Dark Shark”), Tattooga and finally Port and Starboard as the red-blue matching outfit figures. In my opinion the figures look great, especially Captain Redbeard and Tattooga, although I’d love to have seen some arm printing on those 2 specifically. The rest is great, the figures look like the classic ones while having significantly more detail. It’s also worth pointing out that the set comes with a few animals such as a shark, a parrot, a pig (in a new color) and a few cool crabs. 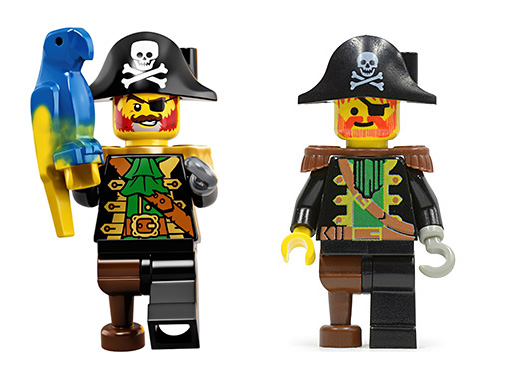 And now for the moment we’ve all been waiting for, the shipwreck itself! Oh boy, where do I even start. There are 27 bags across 15 bag numbers, plus 3 more unnumbered bags of large elements such as sails, water pieces and sand pieces. As always, the instructions feature more info about the characters (minifigures) in the set and an interview with the designers that gives us a better look at the creative process and as always, it’s incredibly fun to read. The Pirates of Barracuda Bay set is built out of 2 separate halves (the right side being first to build) that when connected give the final look of the wreck. I’ll start from the bottom of each half and work my way up.

The base of the set is made out of beautiful medium azure pieces that represent the ocean and over that, the big tan quarter-circle slopes representing the island (sand). There are awesome looking palm trees on the base as well. The right side features the middle part of the ship wrecked. It’s packed with cannons, barrels and many foliage pieces. Also, there’s a sign that says Jose’s Inn, that is a small detail that the designers put in- it’s the name of Pablo’s dad.

There’s a funky Tiki looking statue build off to the side that is an homage to the 1994 Islanders theme. The rooms on this side are the bedroom with 2 beds and a bar room with barrels and bottles. The prison cell with a skeleton and a tiny farm are also present on this side. The left side of the shipwreck features the front of the ship with a beautiful mermaid statue, inside it are just some boxes and crates. This side also features the back of the ship, together with the Captain’s cabin and the kitchen underneath. There are folded up sails all around the build, together with many foliage pieces and cool looking palm trees already mentioned.

Now let’s get to the ship itself. Turning the wreck into the Black Seas Barracuda takes around 20 minutes. There’s an extra bag of pieces just for that process alone. The stunning ship constructed, is a usual but extremely colourful and unique pirate ship. The Captain’s cabin, the wheel deck and the kitchen are in the back. The bedrooms, bar section and the main deck with the sails take up the middle. Up front is the mentioned mermaid and some blank space underneath. In comparison to the older one, the new ship surpasses it in every way. The new one is miles ahead in its solid construction, detail and play ability. It really is a perfect pirate ship and personally my favorite LEGO pirate ship ever! It’s also worth mentioning that the set includes a smaller boat (a pre-existing piece). 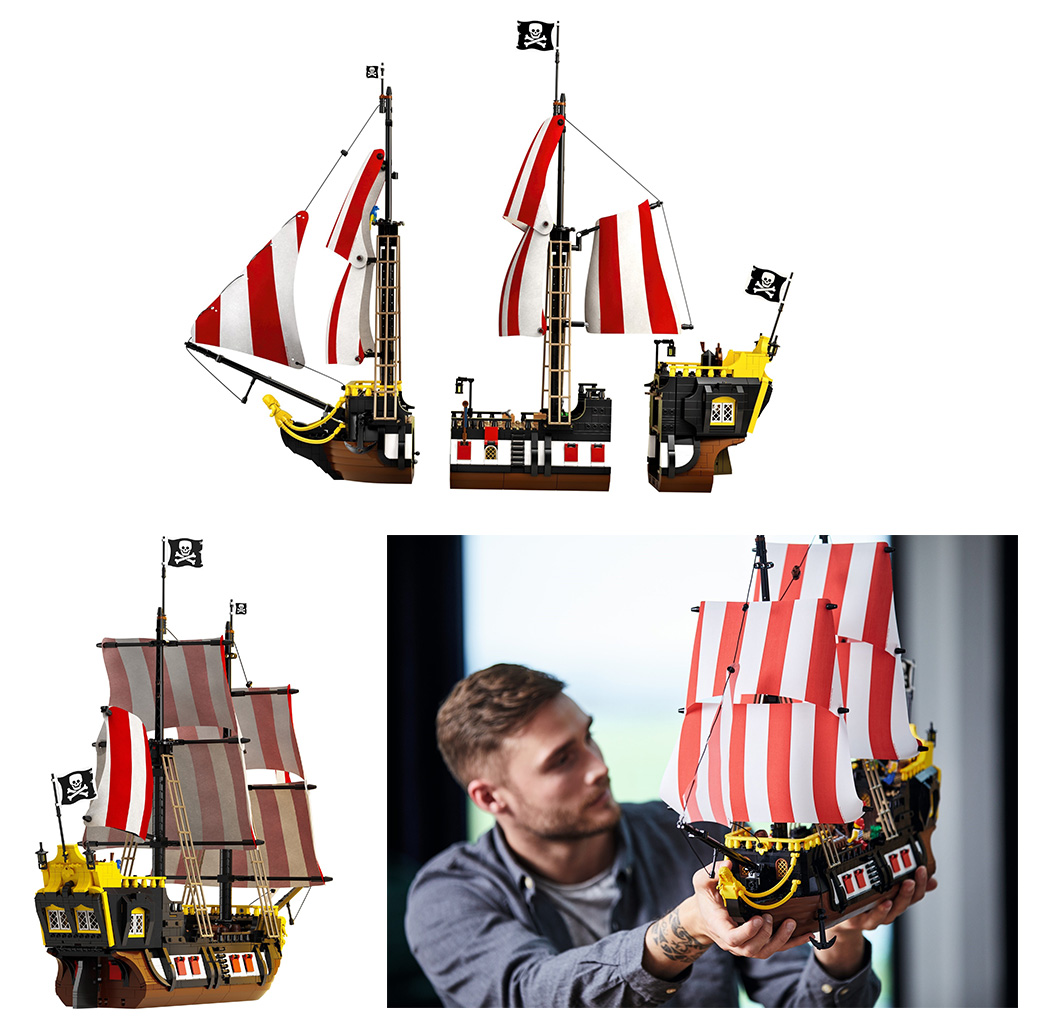 I’m a photographer and I mainly do LEGO photography because I love giving my minifigures some life through photos. The 2 most important things when doing LEGO photography are scene setup and posing the minifigures as best as possible. I love taking photos of landscapes, landmarks and nature, often times those are the things I combine with my minifigures photography. But during a bad weather day or a lazy Sunday, I always do indoor photography. The most important thing while indoors is exactly the scene setup I mentioned. Sometimes it can be moss, leaves, different flowers, sand, snow (flour) and anything else you prepared for a shoot. But other times it usually is a brick-built environment or a pre-existing LEGO set.

Big sets like this are perfect for that, but does Pirates of Barracuda Bay hold up? The answer is YES! As I previously mentioned, the minifigures are great, the set is full of different rooms, decks and even has a mini animal farm, it’s packed with many details which is the most important thing! There are endless scenes that can be recreated and photographed. The dream shot of this set that I would love to do would be taking the Black Seas Barracuda ship to the coast, putting it in the water and taking a photo where it’s sailing into the sunset. Also I’d love to take some macro detail shots of the shipwreck as well as creating some scenes with the minifigures. 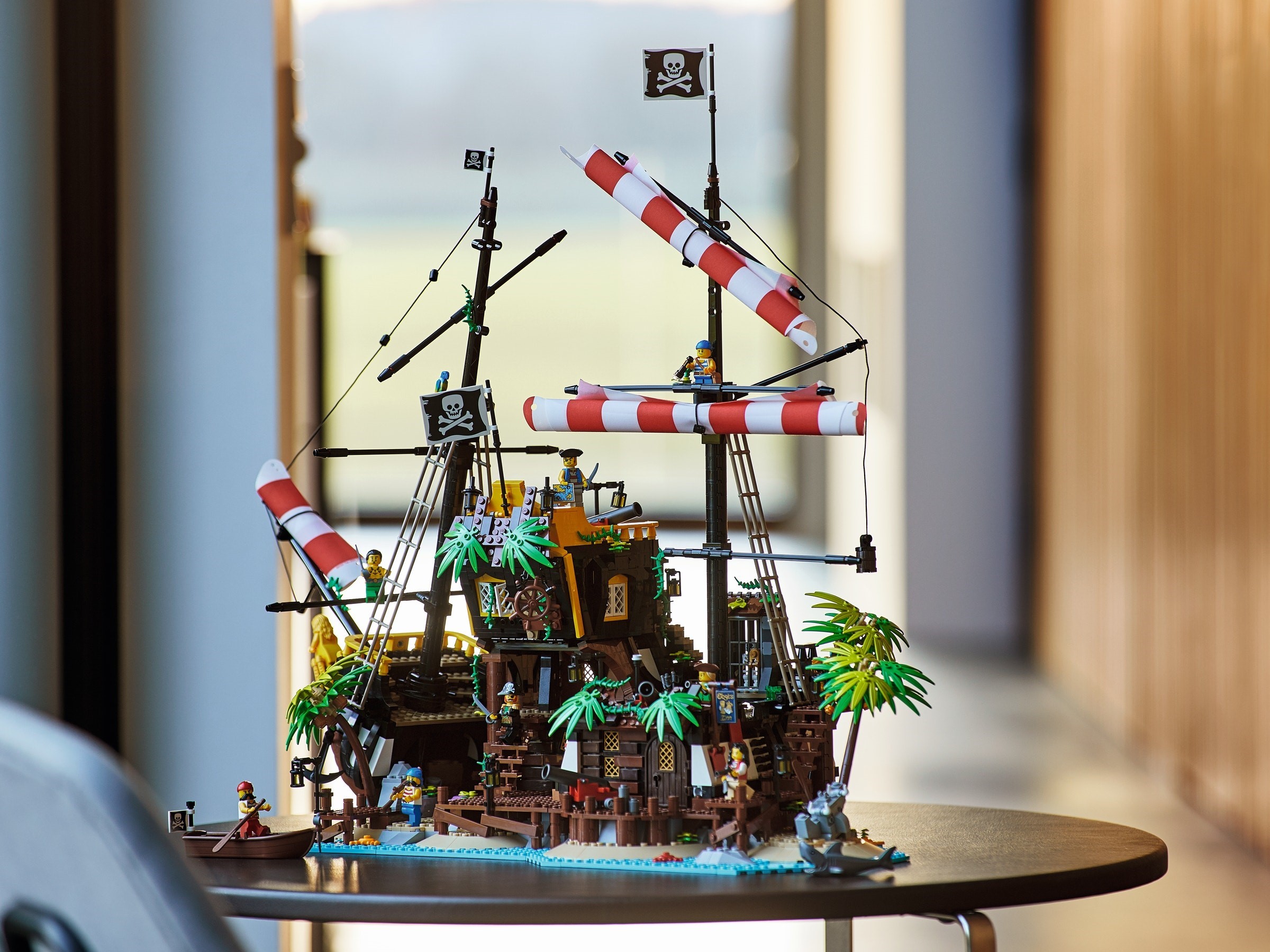 And now for the question you’ve all been wondering- Is the set worth it? In my opinion the set is 100% worth the buy. First of all, 2500+ pieces for $199.99 is a steal. That is a great price for piece ratio if you ask me. The set itself is perfect for both kids and adults. The perfect scenario would be a kid building the set with this dad. I’m sure a 6 year old would struggle to build alone it but sure wouldn’t struggle playing with it. I think it’s both a fantastic display piece with great play features for kids.

I am in love with Pirates of Barracuda Bay. It’s definitely one of my favorite sets ever, I really forgot how much I love LEGO Ideas sets! Sadly I didn’t have a physical copy of this set while writing this. I’m not sure if I’ll buy the set just yet. I might wait for double VIP points or a LEGO Store promotion. But one thing is sure, I loved taking an in depth look at the set for this article and I had much fun writing about this beautiful set! Till next time, 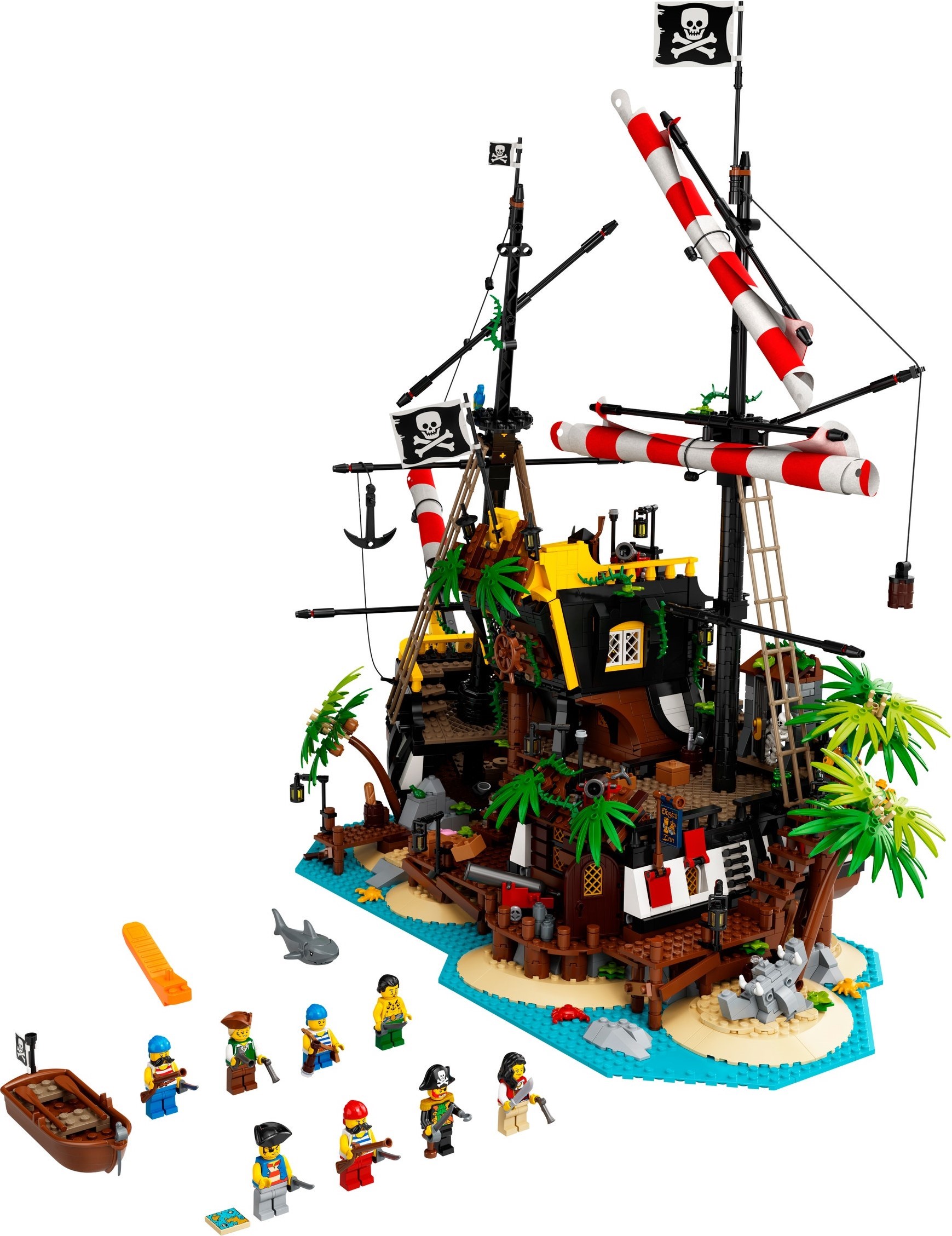 Images from Brickset and LEGO Ideas

Interview with an AFOL: let_them_fly_lego