In the last few weeks, a certain project has blown up on LEGO IDEAS: Greendale Community College. This project was based on the TV show Community which ran on NBC for 5 seasons, and was picked up for its 6th and final season by the now non-existent Yahoo! Screen. User bulldoozer21 has created an awesome set based on the college, and today we’ll take an in-depth look at it! 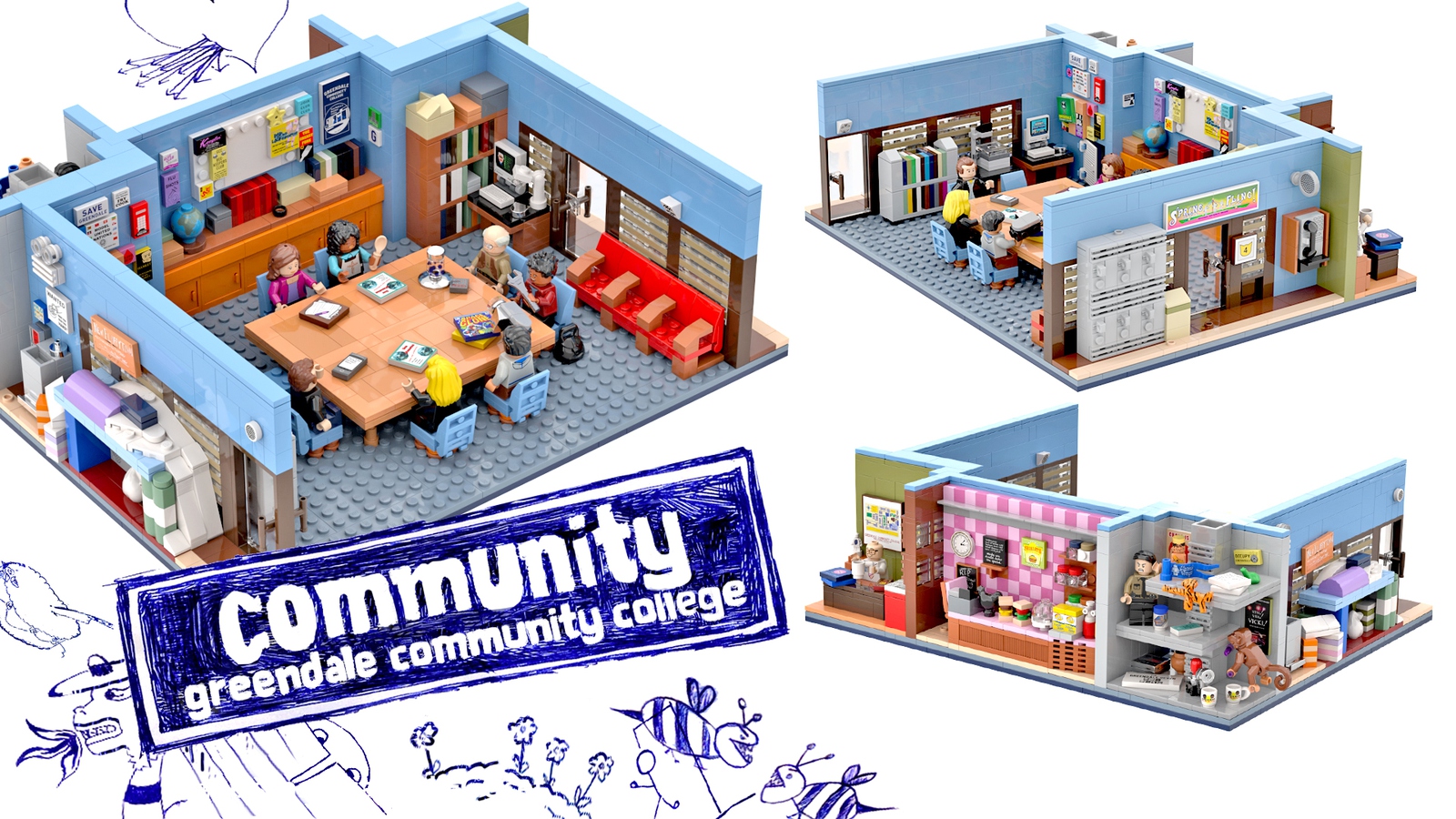 In the image above, you can see how the LEGO IDEAS Greendale Community College set is divided into 6 areas: The study room, two corridors, the Dean’s office, Shirley’s sandwich shop, and Chang’s den. Now let’s have a more in-depth look at these sections.

In the show this is where the Greendale seven spent most of their time, so naturally this is the largest section in the set. At first glance this doesn’t look like much. However, if you’re a big Community fan, then you will notice some awesome Easter eggs hidden inside this section such as the Greendale flag, a poster saying Save Greendale and even the inspector spacetime phone box witch is a reference to Doctor Who in the show.

There is also a purple poster telling people to get a flu shot, a Star Burns memorial poster, a fry cook ad which is a reference to the episode where Abed starts a chicken finger empire and a “pop pop” post stick note which is a reference to the character Magnitude whose catchphrase is pop pop. Another awesome thing in this section is a vent in the corner which leads to Chang’s vent den. Finally, in the middle of the room is the iconic study table with eight seats set around it. 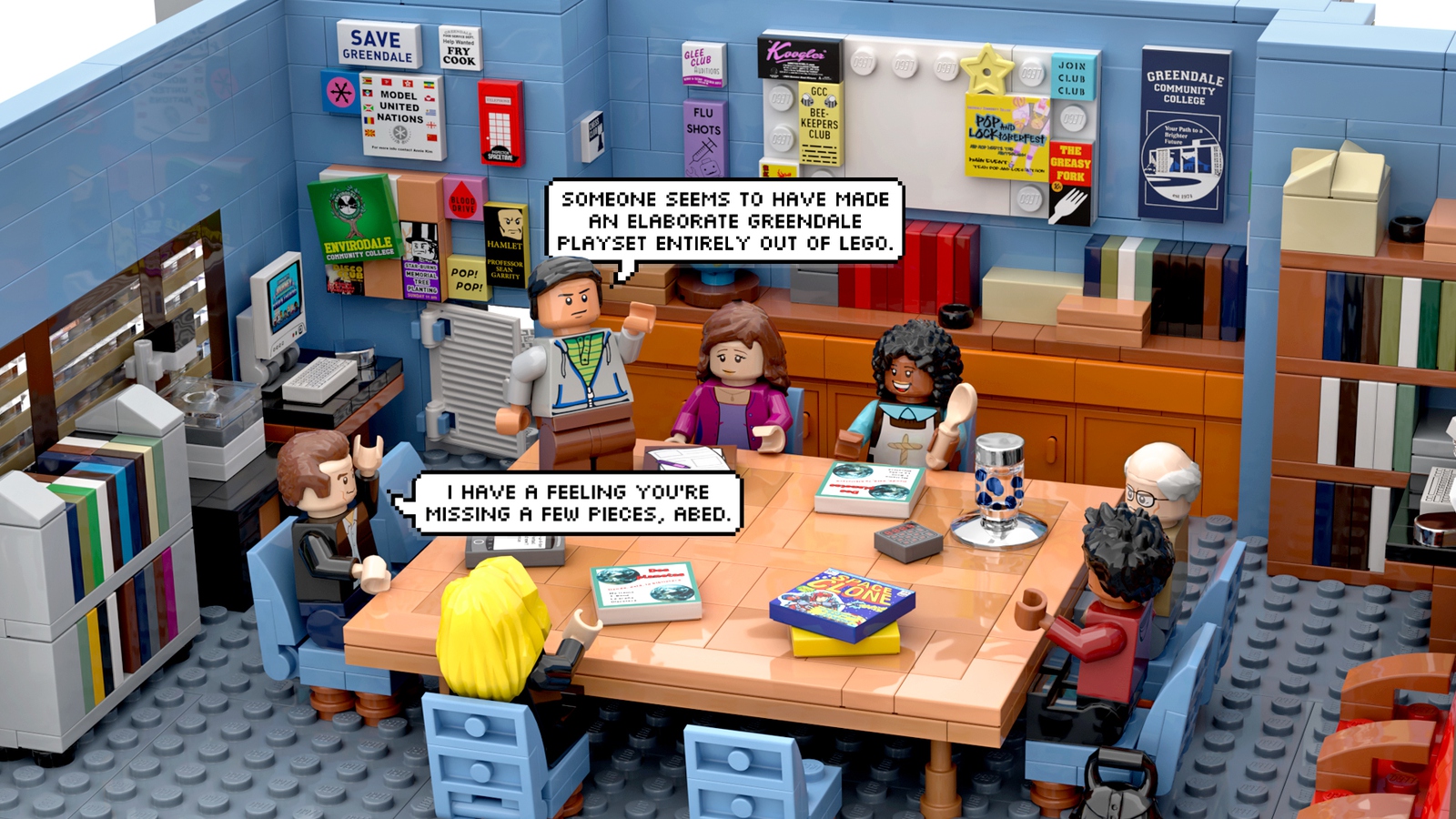 The next two sections that I am going to talk about are the two parallel corridors of the set. On the right side of the set is set in the first paintball episode complete with a “Spring Fling” banner and paint splatters everywhere. On the left side corridor is Troy and Abed’s blanket fort called “NewFluffyTown”. Also, on that side is a trampoline and a wanted poster looking for the ass crack bandit showing the same coin as pierce is holding in his hand. Finally, Abed is equipped with a camcorder which he uses to record his movies in the show. 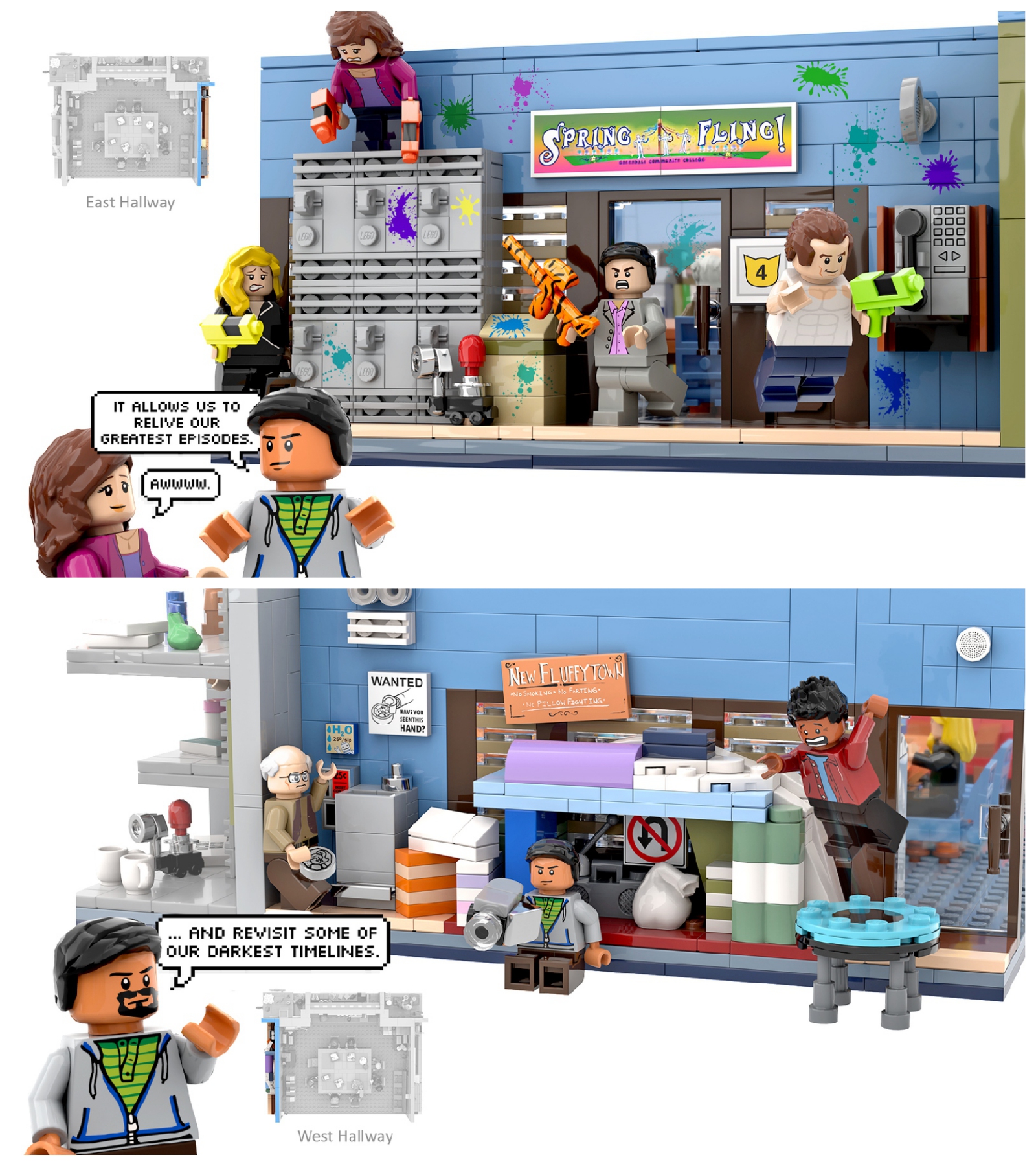 In the right side of the model is the Dean’s office. Inside, there is the Dean’s desk with a seat behind it. On the desk, there is a poster with the Greendale logo printed on it there is also what I think is a leaflet for a school drama production. On a red unit, there is a lamp and a newspaper sat on top of it. There is a picture of a dalmatian and a huge poster of Greendale on the wall. Finally, there is a unit with a model of the famous Greendale Human Being! 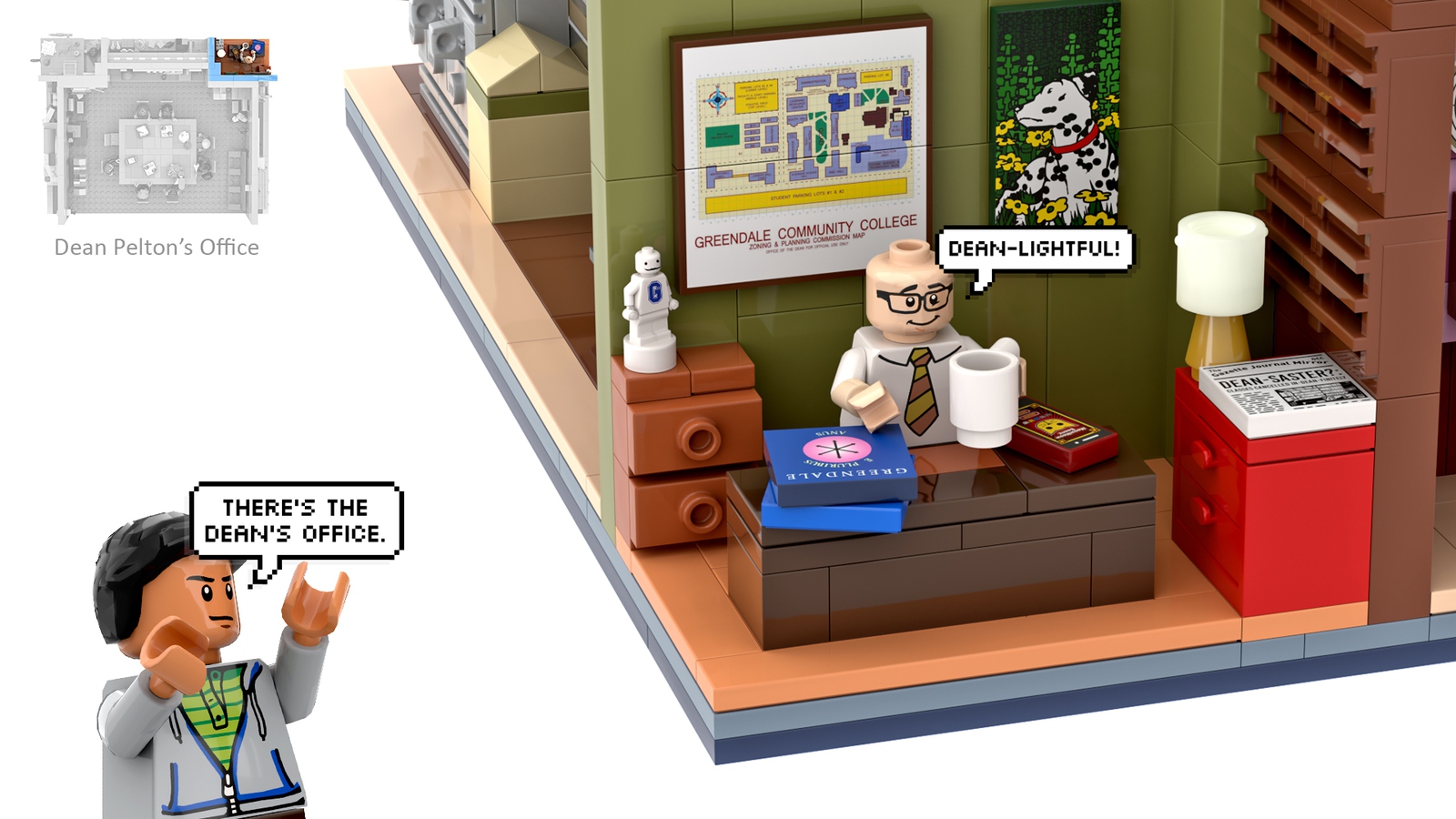 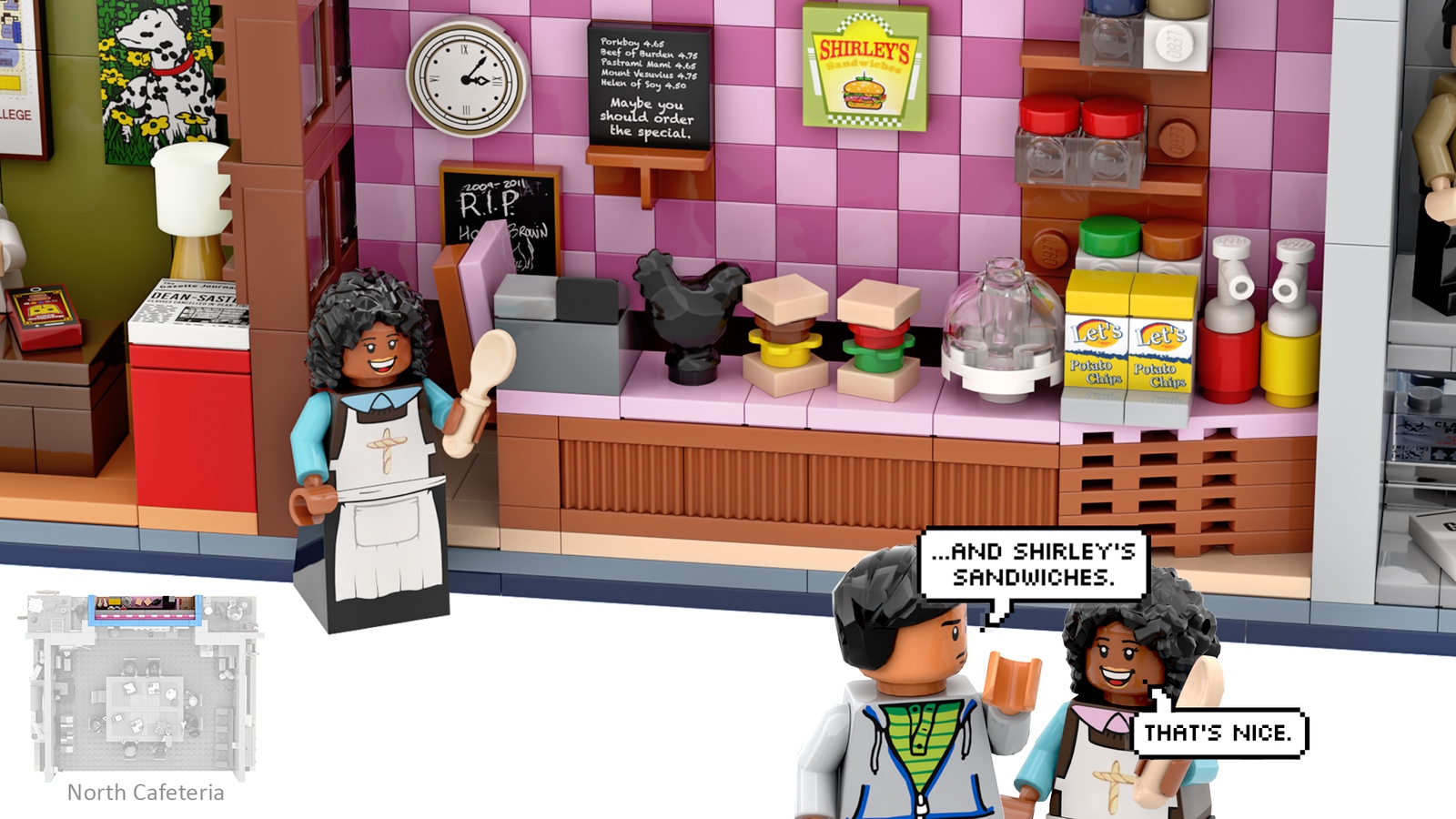 In the final section of this model, there are tons of Easter eggs such as the monkey known as Annie’s Boobs carrying Annie’s purple pen, a pair of “Troy and Abed in the morning” mugs. Also, included is a propaganda poster of Chang from when he took over Greendale, a poster of the Greendale seven, a pack of Hawthorne Wipes, the ugly troll doll, a human being flag, Chang’s paintball gun and what I think is the substance that turned people into zombies. The way the room is structured is pretty cool with three levels. 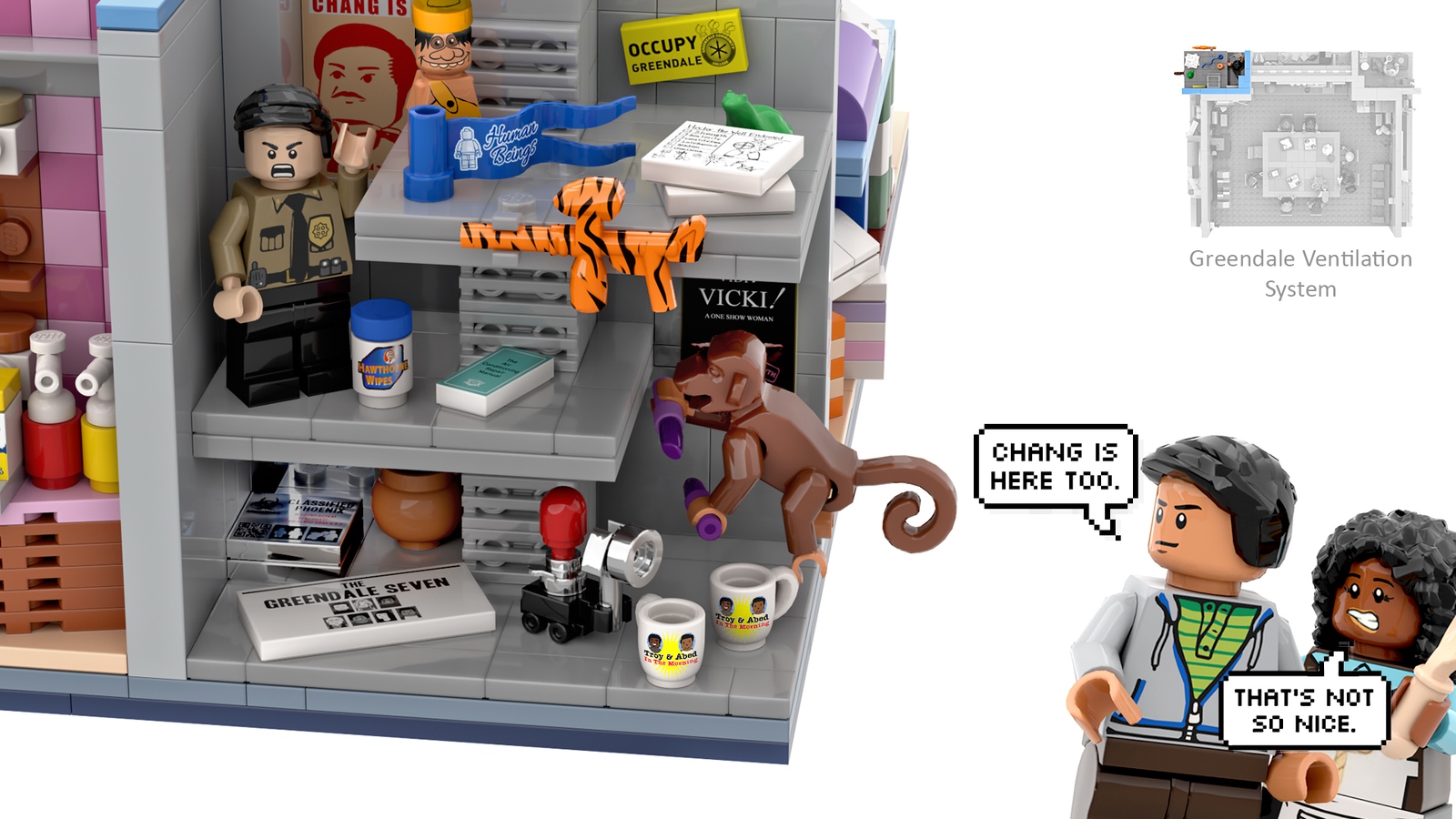 There are many versions of each character in the show depicted in the pictures.

Britta Perry: There are only two versions of Britta, the first one is her in a casual black leather jacket and the second is her in a robot costume from Abed’s Christmas special.

Pierce Hawthorne: Like Britta and Annie, there are only two versions of Pierce. The first one is him in his casual wear using the Alfred hair from the LEGO Batman Movie. The second version is Pierce as a teddy bear from the Christmas special.

Shirley Bennett: The first version of Shirley is in her Shirley’s Sandwiches clothing with a dress piece instead of normal legs and also, she has a cross on her apron showing that she is a devoted Christian. Her second variant is Shirley as a baby from the stop-motion Christmas special. 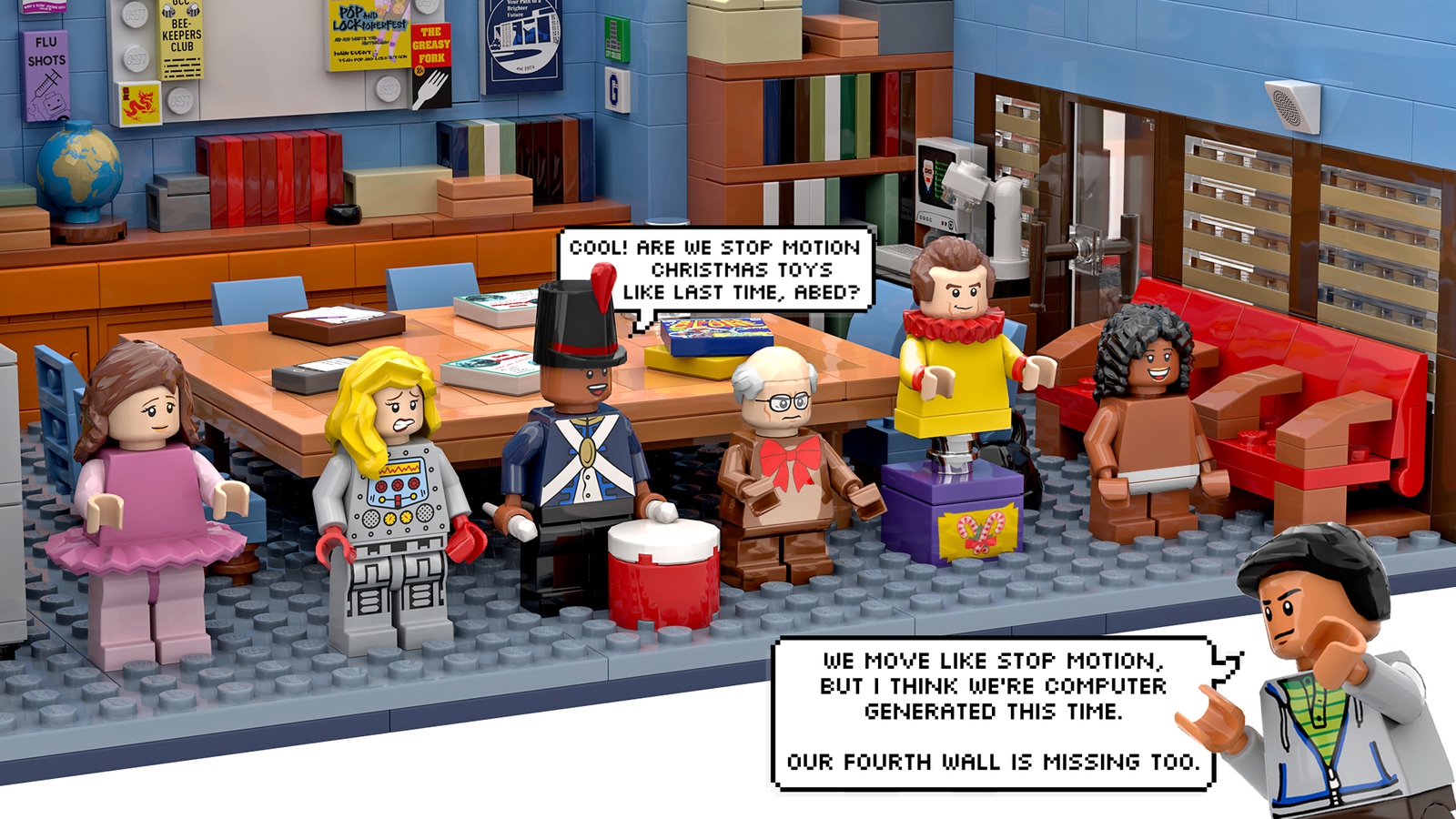 Troy Barnes: There are two versions of Troy. The first one is of him in a red jacket and black trousers. The second version of him is in a marching band outfit.

Abed Nadir: The final character of the Greendale seven is Abed. He is the only character in the Greendale seven who only has one version (unless you count his goatee in one of the slides when he is explaining what is happening in the blanket fort section). Anyway, let’s talk about the actual outfit. He is wearing a green shirt under a grey jacket.

Ben Chang: The one of two reoccurring characters included in this set is Chang. He has two versions included the first one is him in his security guard uniform and the second on is of him in a pink shirt and grey jacket from the first paintball episode and you can equip him with his tiger themed paintball gun.

The Dean: There is only one version of the Dean in this set but he looks great! He is wearing his classic shirt and a tie and he is also wearing glasses.

At the moment the Greendale Community College project on LEGO IDEAS has received 10,000 supporters. The crazy thing is, it has only been up for a few weeks! But what is really cool is that this project has the support of Yvette Nicole Brown who plays Shirley on the show who tweeted about it! It also has the support of Ken Jeong who plays Ben Chang on the show who also tweeted about it!

The slogan for this project is #sixseasonsandaLEGOset which is a parody of the hashtag #sixseasonsandamovie which is what fans have used to get the creator Dan Harmon to make a movie. The phrase “six seasons and a movie” came from an episode when Jeff told Abed the show would last three weeks and Abed replied by shouting “six seasons and a movie!” 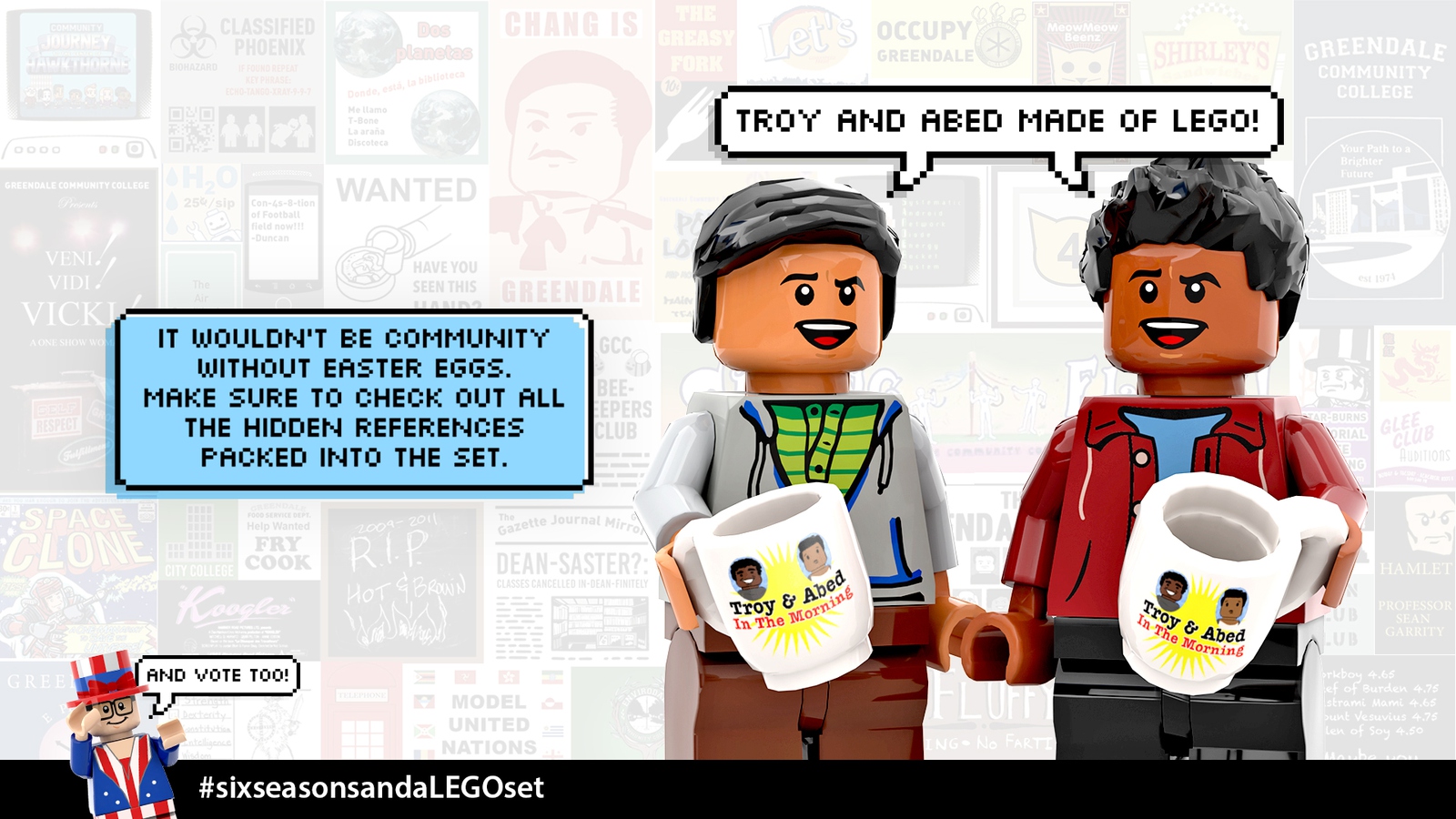 I hope you all enjoyed. I can’t wait to see if Greendale Community College project will become a real LEGO set!

All images are from the LEGO IDEAS page of the project