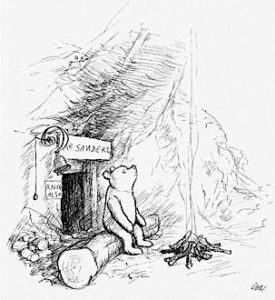 Ever since launch in 2008, the LEGO Ideas website has proved to be a fantastic portal for fans to create new sets. Today, I am highlighting a potential new set based on Winnie the Pooh. Last week a perusal of my LEGO feed from warlord_lego on Instagram yielded something incredible: a LEGO Ideas Winnie the Pooh set gaining votes on the Ideas website. I immediately contacted the creator, and asked for an interview. I give you Ben from Suffolk, England (benalder1) and his dream from the Hundred Acre Wood. 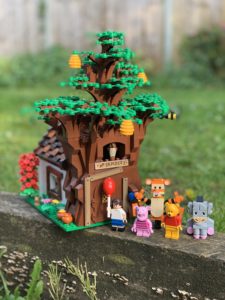 I grew up, as no doubt many have done, reading the adventures of the silly old bear, Winnie the Pooh. Christopher Robin and Piglet, Tigger, Eeyore, Owl, and the other inhabitants of the fantastical woods have delighted people for many years. Now, they may do so in LEGO form.

RedBeard: Hello! Thanks for agreeing to be interviewed. First question: What do you love about Winnie the Pooh?

Ben: I love sharing the stories with my children. This gives us some lovely family time when we all sit together reading. Plus, as early as I can remember I have always had Lego around me. I loved playing with it. As a child I remember sitting for many hours with my parents, creating all kinds of wonderful things. My love for LEGO has been hugely rekindled when my eldest child was born about 5 years ago.

RedBeard: What made you want to make the Ideas set based on the Winnie the Pooh stories?

Ben: My children. I wanted to make something special for them to sit and play with and be able to re-create some of their favourite bedtime time stories.

RedBeard: What challenges did you face designing this set?

Ben: One of the largest challenges was trying to get the brick-built figures in the same proportion to the minifigures. Initially I built the set digitally. After many hours of changing and adding bits, I was finally happy with it. I ordered some of the extra parts I needed and built it from real bricks. I made a few changes to it, such as adding a bee in the tree and giving Piglet short legs, which I feel suits him better.

RedBeard: I love the set. Any current or upcoming sets look exciting to you?

RedBeard: They do! Last question: which LEGO part or brick do you feel best represents you?

Ben: It would have to be the minifigure camera as I love both LEGO and photography. It sums me up well!

My thanks to Ben for participating.

Winnie the Pooh and Friends 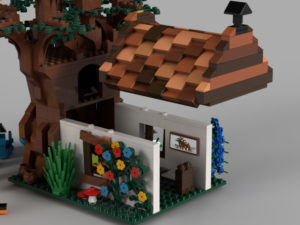 As you’ve seen by the pictures, this LEGO Ideas Winnie the Pooh set is delightful and fantastic. I would love to have this as a display piece alongside other favorite Ideas’ sets. I have the LEGO Ideas Flintstones, Wall-E, Back to the Future, and Ship in a Bottle. Winnie the Pooh would fit right in. The set currently has 6,377 of the 10,000 supporters it needs as I have just added my vote. It only needs a mere 3,623 more. I know with a worldwide LEGO community, reaching that number is not hard. That is why I am honored to bring this Ideas campaign to the attention of our FireStar Toys community and readers. If you add your vote, I know this set can reach an official LEGO review. I believe LEGO would produce it after that.

Winnie the Pooh appeared in the Hundred Acre Wood in 1926, just 7 years shy of a hundred years ago. A.A. Milne wrote the stories about the bear, and E. J. Shepherd drew the illustrations for each story. In 1961, Disney acquired the rights to Pooh and his friends. I remember reading a few of the stories, but more prominent for me were some of the cartoons that Disney created. My little sister and I watched and enjoyed many adventures together.

LEGO would be the next logical extension of the bear and his adventures. Bringing him to life in brick in in the second decade of the new millennium would cement his world wide appeal and longevity. His original stories have been read in many languages. During the Cold War he even made it to Russia, proving that even political foes have more in common than they realize. Considering his humble origins as a character based on Milne’s son’s beloved plush animals (which can still be seen on display in the New York City Public Library), Pooh has conquered the world with love and the delight of children.

I absolutely love that Ben has created this LEGO Ideas Winnie the Pooh set because of and for his children. That is right in line with the origins of the stories. This continues the tradition of fathers and children sharing the wonders of imagination. While my dad never had much interest in LEGO, I did learn of science fiction literature, Star Trek, baseball, and many other things from him. Much that makes me happy I learned from my father. I am deeply grateful that he took time to share with me what he loved.

I don’t have children of my own, but I have enjoyed sharing my love of LEGO and of literature with my nieces and nephews. One of the best lessons I have learned as an adult is that you do not need to have children of your own to fill a parent’s role in passing along personal passions. As all nine of my nieces and nephews (and possibly more!) grow up, I look forward to sharing in many healthy obsessions with them. Is that not how Winnie the Pooh himself has survived nearly 100 years? Certainly if parents and children did not share their appreciation with the generations that followed, then Winnie the Pooh would have faded into the pages of history rather than coming alive through them.

Please share the Ideas project and lend your vote to make it reality. Collectively, we can add the next page to Pooh’s history!

As always, I look forward to what we can build together.

Interview with an AFOL: stud_economy