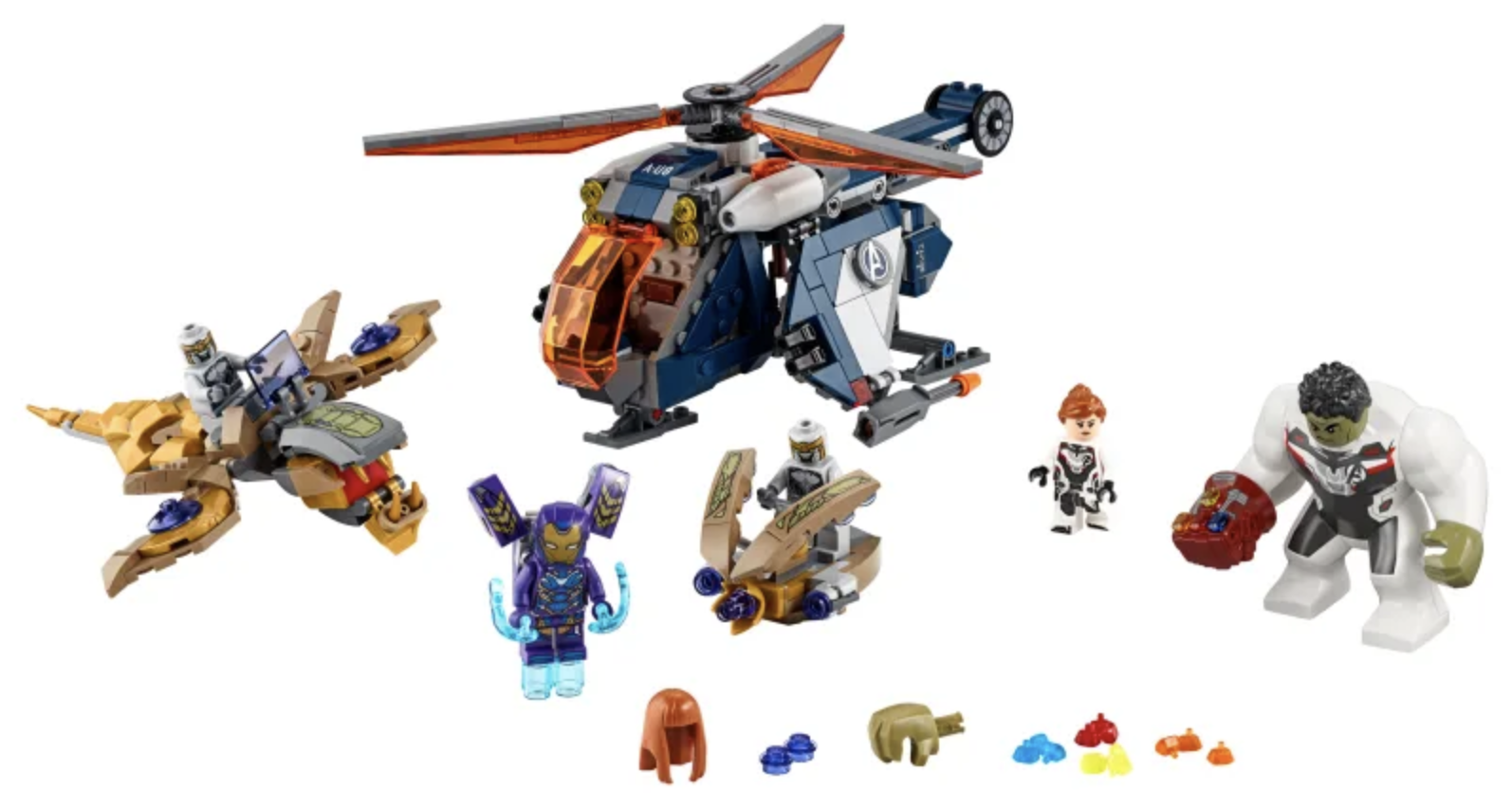 If you’ve been in the dark in the LEGO world in recent months, you may have missed a colossal announcement in the world of LEGO Marvel sets. For the first time ever, it has been confirmed that a second wave of sets based around a LEGO Marvel film are coming, a first for the license. This is incredibly exciting as so many of the Marvel films are packed full of sequences which would make phenomenal LEGO sets, so it is very exciting to think that we are going to have an opportunity to recreate some of those moments. The film these sets will be based around is, of course, the colossal Avengers: Endgame.

Speculation is rife about what we may see – with fans saying that we may see several of the characters and costumes which didn’t make it into the first wave of LEGO sets. Of note right off the bat is the fantastic Ronin costume which Clint Barton wore within the film. This incredibly unique costume was missed in the first wave of sets, with LEGO choosing instead to release Clint within his Quantum Realm costume. Equally, Captain America’s awesome new scale-mail armour was also missed in favour of the Quantum Realm suit. The possibilities are endless!

One thing we do know we WILL be getting in this wave is the awesome new ‘Iron Man Infinity Gauntlet’ – a monumental element in the story of Endgame. The gauntlet will come in the newly revealed Hulk Helicopter Drop set, and will include a whopping four out of six LEGO Infinity Stones. These stones are the Space Stone, the Mind Stone, the Soul Stone and the Reality Stone. We thought we’d breakdown where the other two LEGO Infinity Stones can be found, in addition to the rest of the stones which complement the gauntlet, just in case one set of them isn’t enough to satiate your power-hungry needs! Let’s jump into it. 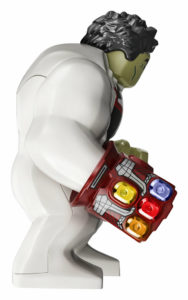 The Space Stone is one of the easiest of the LEGO Infinity Stones to get your hands on – coming in the cheapest Avengers: Infinity War set which is 76101 Outrider Dropship Attack. This set retailed for around ten pounds in the United Kingdom, and was a great way to get your hands onto the initial stone for your collection. In a fitting manner, the stone which was originally housed within Red Skull’s Tesseract in Captain America: The First Avenger came packaged with the First Avenger himself in this figure pack – this time donning his long beard and hair which is more akin with his comic book alter ego, ‘Nomad’.

The pack also included a brand-new version of Black Widow complete with blonde hair, two of the Outriders which were the new ‘henchmen’ of Thanos within this film, and a small but nicely designed spaceship. For ten pounds, not only did you get the Space Stone, but you got some great pieces which helped to recreate one of the coolest battle sequences from Infinity War.

This stone is also one of four stones which will appear within the upcoming Hulk Helicopter Drop set, allowing you to get four-in-one if you are patient enough to wait for its November release! 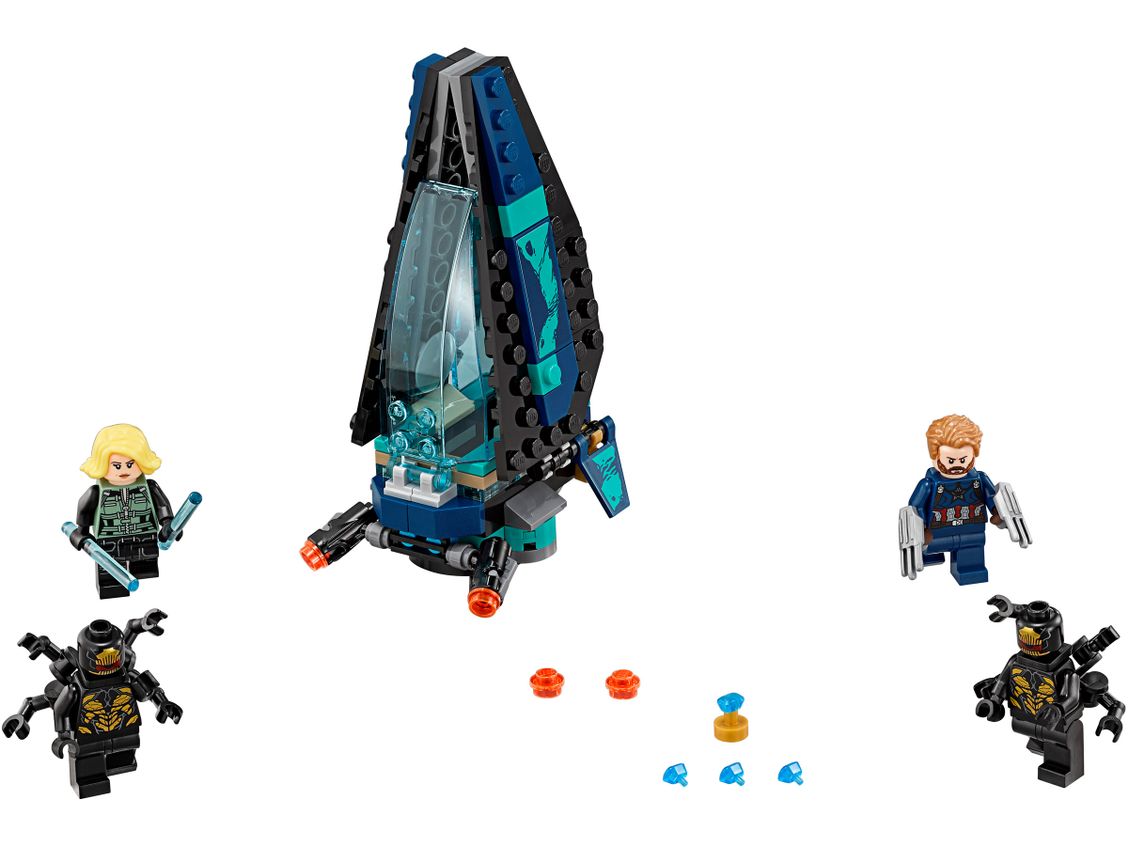 Out of Sight, Out of Mind…

The yellow portion of the infamous gauntlet, and arguably one of the most powerful, is the Mind Stone. Within the Marvel Cinematic Universe, this gem is most frequently attributed with the hero known as Vision, who is created with the stone in Avengers: Age of Ultron. It is fitting, therefore, that the mind stone comes packaged with Vision in a set depicting the heart-stopping sequence where Shuri attempts to remove the stone during the battle of Wakanda. This set, 76103 Corvus Glaive Thrasher Attack, retailed for approximately thirty-five pounds when it released here within the UK.

This great set included new characters of Shuri and Corvus Glaive, as well as providing fans with an opportunity to get their hands on the newest variants of both Vision and Black Panther if they had missed them. Combine this with the fantastic and imposing section of Wakanda wall which forms the bulk of the set build, complete with purple futuristic energy shielding, and you can see why this set was such a popular set upon its release.

This set has been retired officially by LEGO, so you may struggle finding it at your traditional Brick and Mortar stores. Luckily, LEGO have your back, as the Mind stone is another of the LEGO Infinity Stones coming in the upcoming Hulk set. 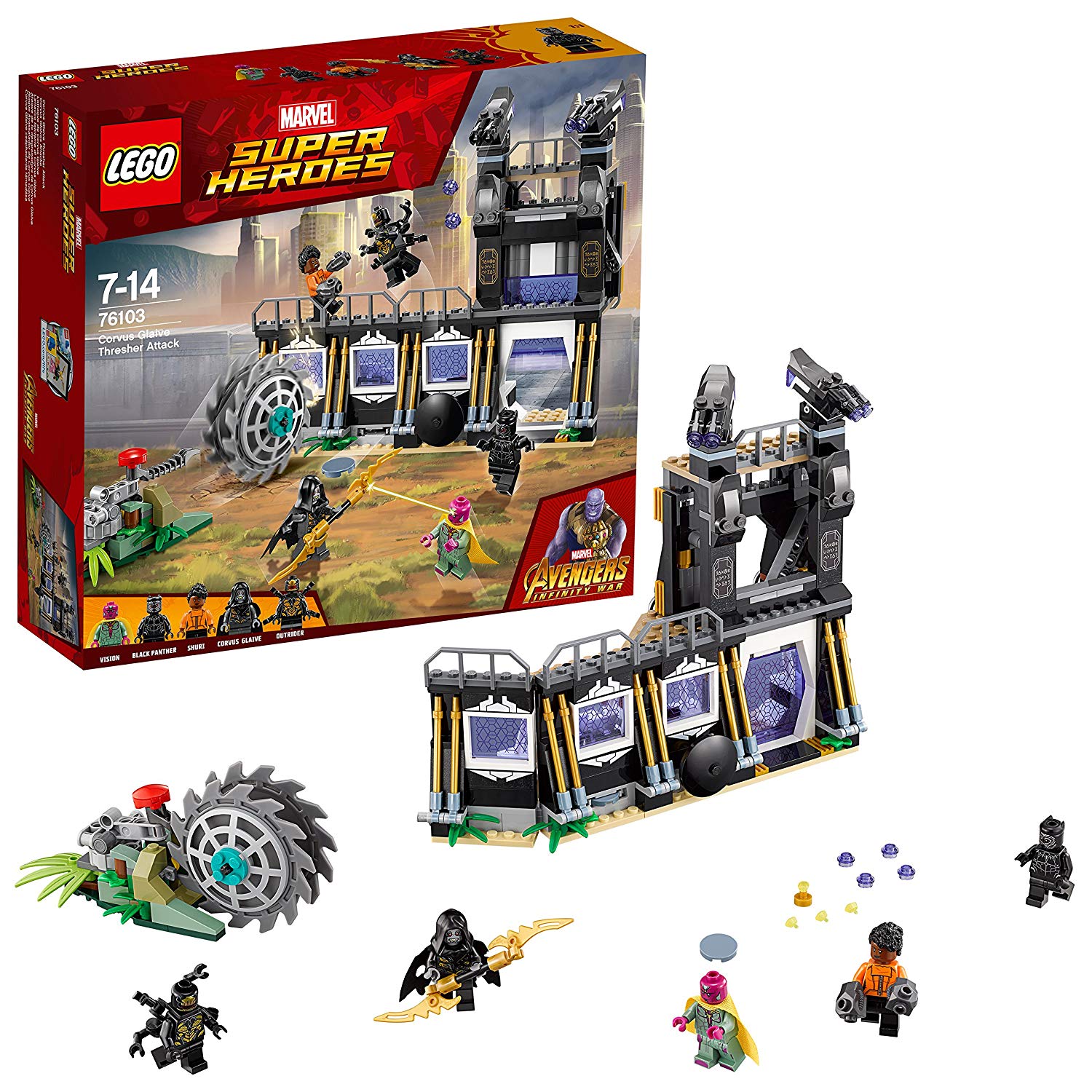 The next stone comes packaged with the man who wields it and the original Infinity Gauntlet, all neatly packaged in with 76107 Thanos: Ultimate Battle. This set was one of the most expensive sets here in the UK – retailing for £69.99 which felt like a little bit much considering the set only included three minifigures and Thanos. That said, the build for the Benatar (the Guardian’s new ship) is a really nice build, which does have space for the Infinity Gauntlet and several members of crew inside.

The reality stone itself is arguably one of the more eye-catching ones, with its deep red hue not to dis-similar to the weapon of choice a Sith would use in another Disney franchise we all know and love. With that said, this is a cool set, and a fun way to get both one of the gems, a neat build AND an Infinity Gauntlet in one neat package.

If that doesn’t appeal to you, however, then this will be the third stone to come within the Hulk set releasing later this year. 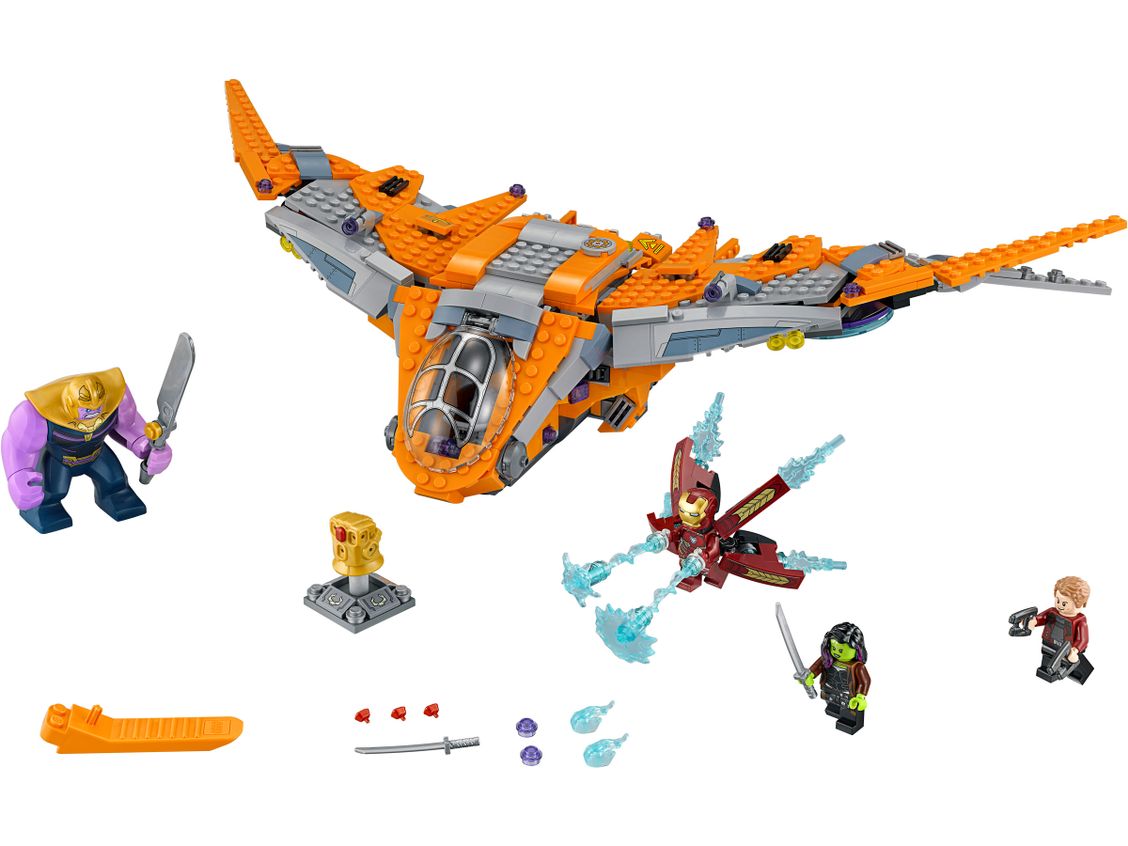 I’ve Got the Power!

The next stone comes in a small Infinity War set, and another set which we haven’t quite touched on yet. The Purple Gem known as the Power Stone, which led to the greatest dance off to ever shake the universe within the original Guardians of the Galaxy film, can be found in 76102 Thor’s Weapon Quest. For a neat twenty pounds, this set will get you a brand-new version of Thor, the cheapest way to get your hands-on Rocket Racoon and a way to get your hands on the first ever minifigure-variant of Groot. My reaction to this set was a solid “I AM GROOT!”.

You also get a fantastic version of the smaller spaceship which this trio set voyage in within Infinity War, and this great little build can be connected to the back of the Benatar from the last set we looked at. And, if that isn’t enough for you, we get a fun little representation of the intergalactic forge which creates Thor’s new god-killer weapon; Stormbreaker.

If this set doesn’t quite capture your imagination however, you can always opt to pick up 76131 Avengers Compound Battle, which includes the Power Stone as one of the two LEGO Infinity Stones within the set. Not only will you get a brand-new version of Thanos, a big-fig of hulk, the hotly-demanded Captain Marvel and Iron Man, but you’ll get a fun recreation of the Avengers Headquarters from Avengers: Endgame. This set does retail for around one-hundred pounds though, so we will leave you to make your mind up! 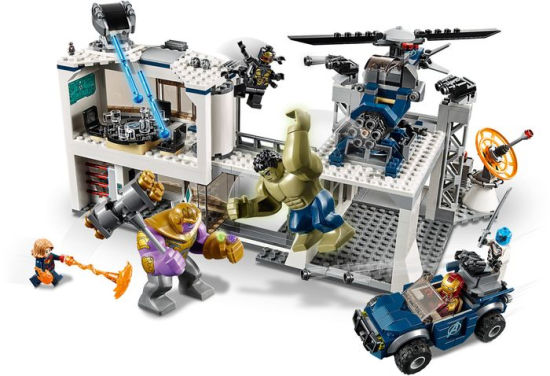 Ain’t Nobody Got Time for That

The second to last stone we must look at today comes in one of my favourite LEGO Superhero sets to date, and proved to be a vessel into a much stranger world within the Marvel Cinematic Universe. This stone gave Doctor Stephen Strange the power to manipulate the Eye of Agamotto within the Doctor Strange movie.

I am, of course, talking about the Time Stone. This piece came within set 76108 Sanctum Sanctorum Showdown – which retailed for around one-hundred pounds here in the United Kingdom and is honestly worth every penny. Not only do we get an assortment of stunning minifigures here, but we get a truly gorgeous build here which mimics the New York street facade of the Sanctum Sanctorum and an apartment in a manner which feels more akin to the Modular series than a superhero set. This set genuinely takes my breath away, providing one of the most high-quality builds we have ever seen in a superhero set. The time stone really is just the icing on the cake.

Of course, if for some reason, you don’t like this set (and believe me, I am questioning how), then you may wish to pick the Avengers Compound Battle set mentioned above up, as this is the other set which this stone can be found in. 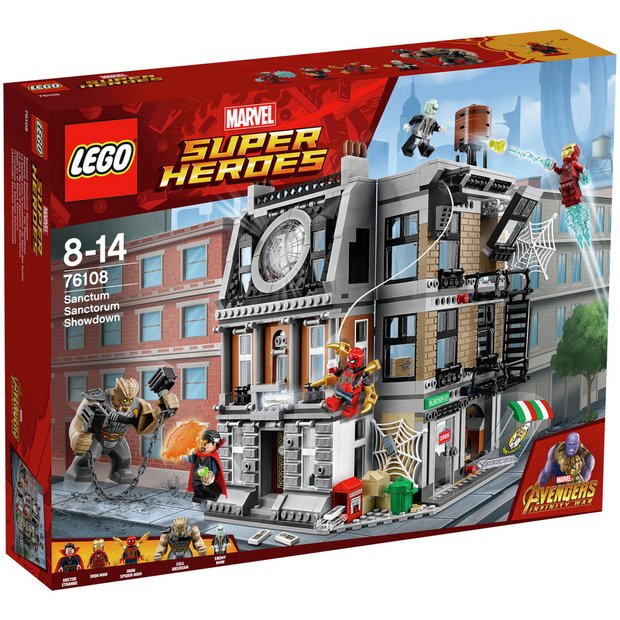 The Heart and Soul of The Party

The final stone we must look at is the Soul Stone – and I am STILL not over that scene from Endgame so I am going to get this one out the way quickly. The Soul Stone comes in one of the smaller Infinity War sets – 76104 Hulkbuster Smash Up. This set retailed for thirty pounds and included variants of characters which had been seen before, alongside the final member of the Black Order, Proxima Midnight.

This set was a fun build, with the designers of the set re-evaluating the previous release of the Hulkbuster in the Age of Ultron line and expanding upon it to pack in some different features and designs to still make it its own unique set. As one of the cheaper sets it’s an easy way to pick up this stone AND get your hands on the second ever release of everyone’s favourite flying hero, Falcon! If you don’t particularly want another Hulkbuster, however, then don’t worry, as the Soul Stone is the fourth and final LEGO Infinity Stone which will come in the upcoming Hulk Helicopter set releasing in November of this year. 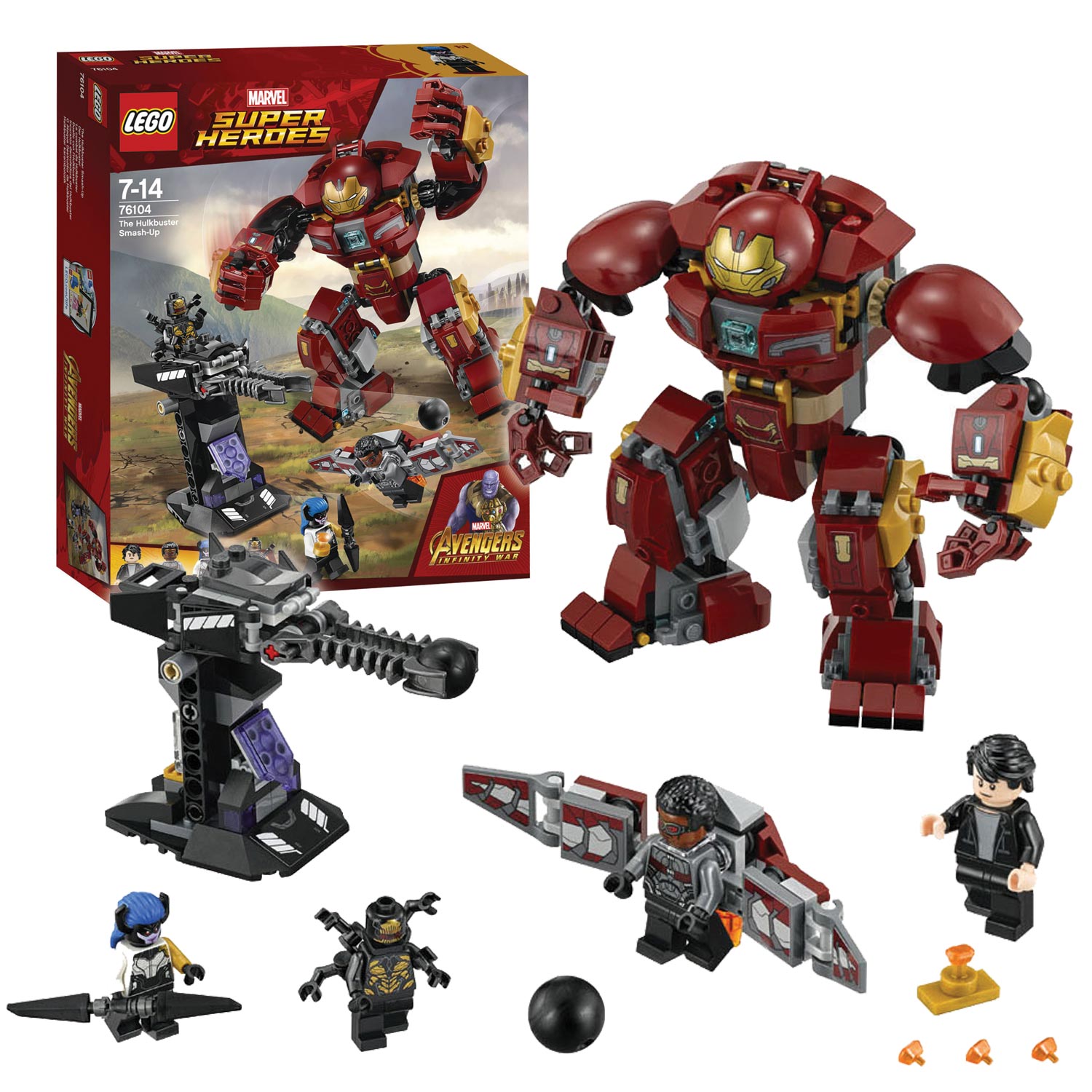 To conclude, there are a variety of different ways you can get your hands on these legendary stones! Of course, if none of the ways I’ve looked at appeal to you, you can just buy the LEGO Infinity Stones individually from Firestar Toys.

I hope you’ve found this article interesting. Stay tuned for more from me very soon!

Like what you see? Why not look back at this article I wrote collecting LEGO Avengers Endgame content during the release of the film, or this one for some awesome recreations of the movies in stop-motion form.

LEGO Builder’s Journey for Those Who Love to Build