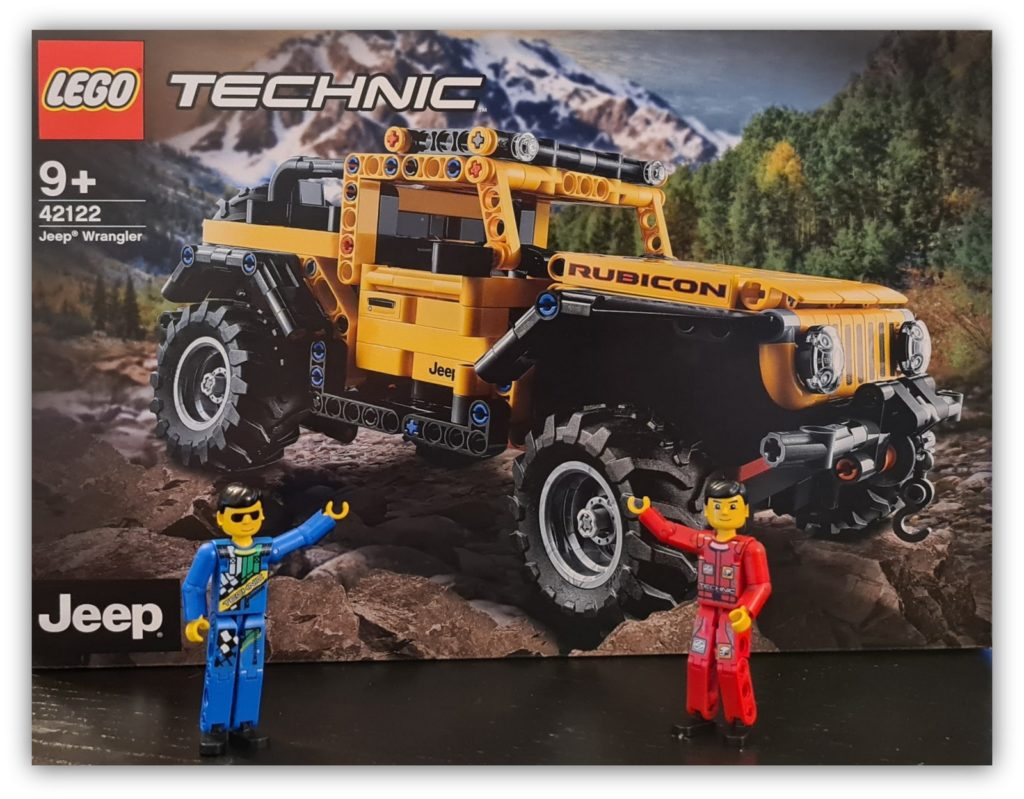 This is a set review of the LEGO Technic Jeep Wrangler, which LEGO.com

suggests you “can create endless off-road adventures with this feature-packed model”. To do so, I also enlisted two Technic figures that have been with me for around 20 years, because I thought that they should fit the set. I wanted to see how the build would work now (my earliest experience was with the Technic Helicopter set 752 released in 1977). 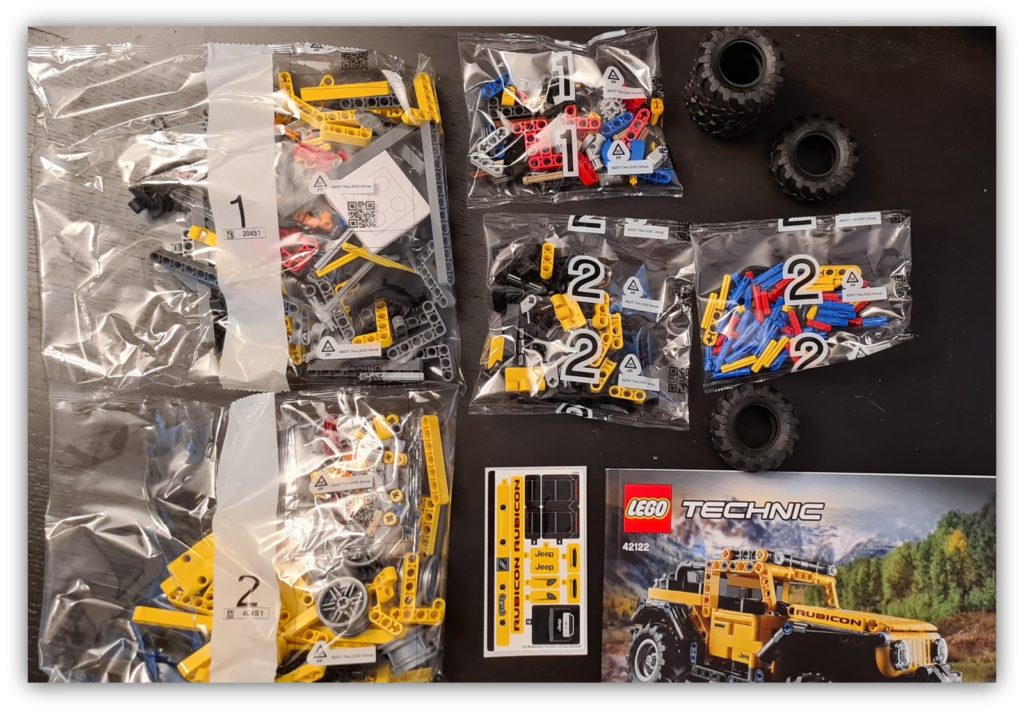 Before we get into the build itself, here is a quick run through of the technical specifications.  There are 665 parts to the set and approximately half that is pins and axels! The finished build measures just over 12cm high, 24cm long and 13 cm wide. I also found that the Price per part for this set is 0.08 $USD; whereas a normal Technic set is usually about 0.11 $USD. As is now normal for Technic sets, there are no figures in this set. 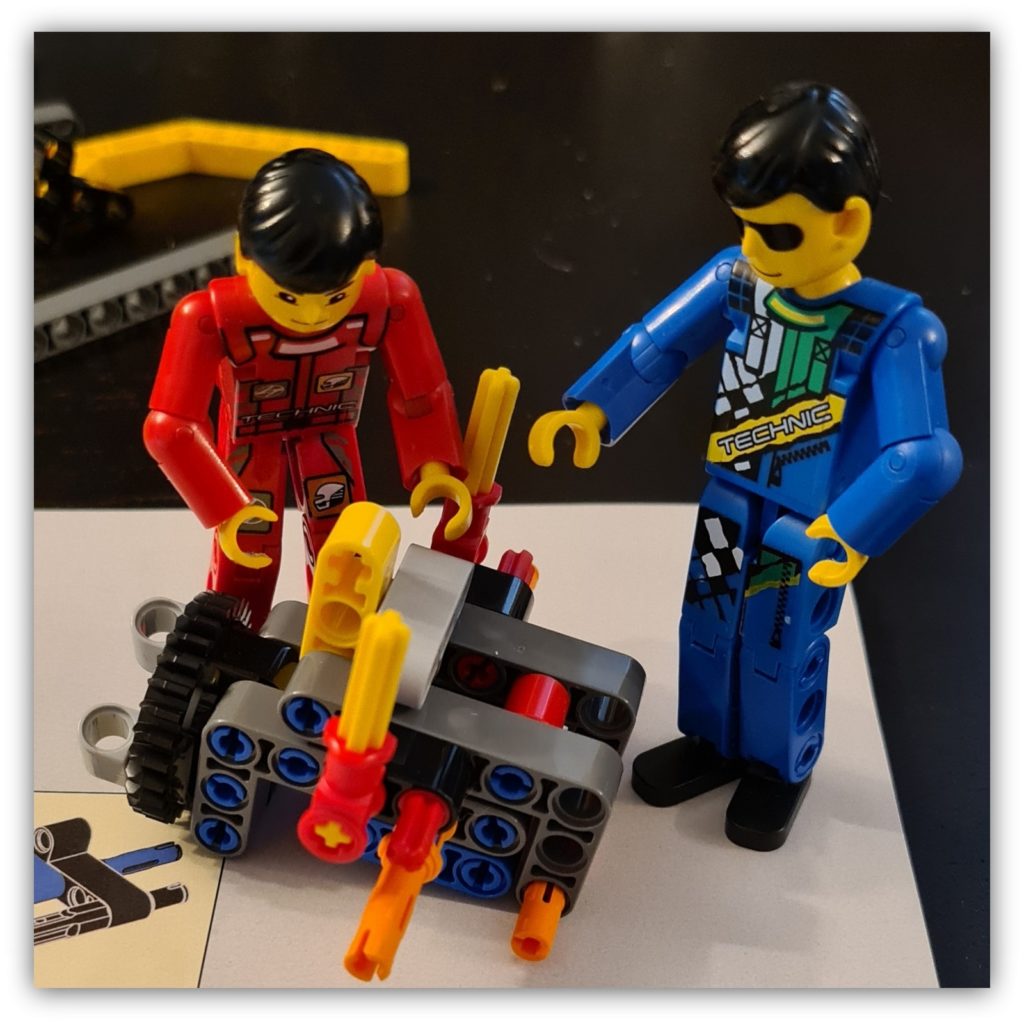 The build is in two parts; the first is the construction of the chassis and some of the body and the second part completes the remainder of the body.

The build starts at the back with the first of the two independent axle articulation elements. You can see in the image above how many pins get used in this build.  There is a lot of steps which seem to have little overall progress on the size of the build; some would say it is a very compact build. I also found a couple of times that I realised “something wasn’t right” and that I had fitted something upside down, meaning a momentary unbuild whilst I sorted it out. 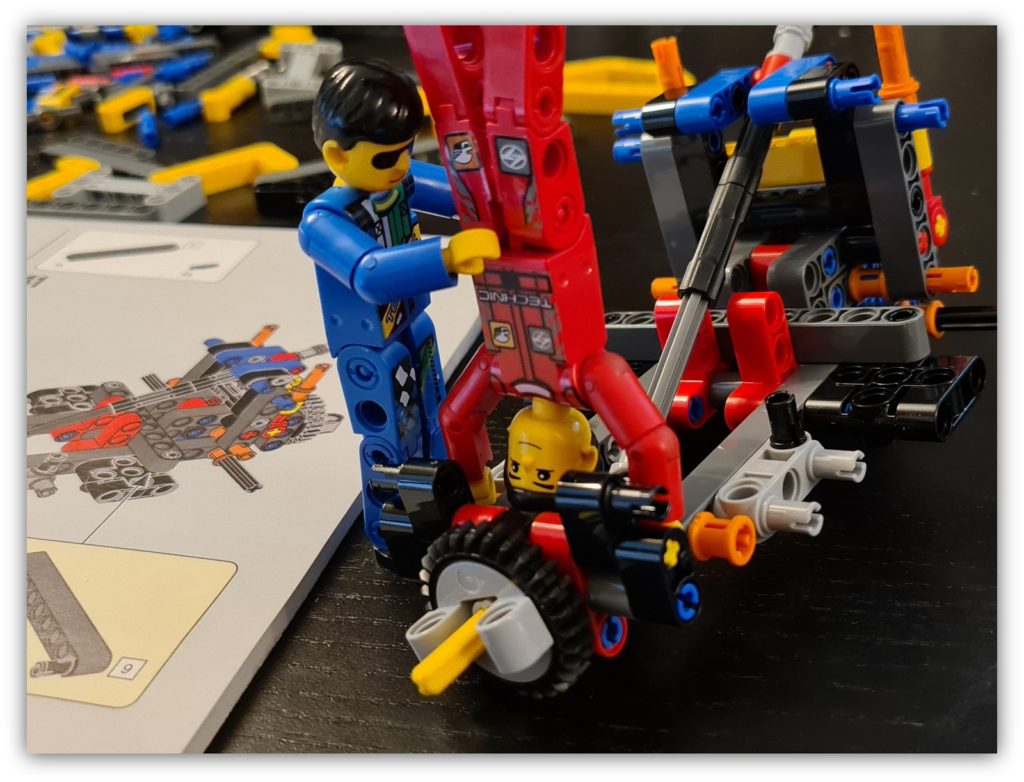 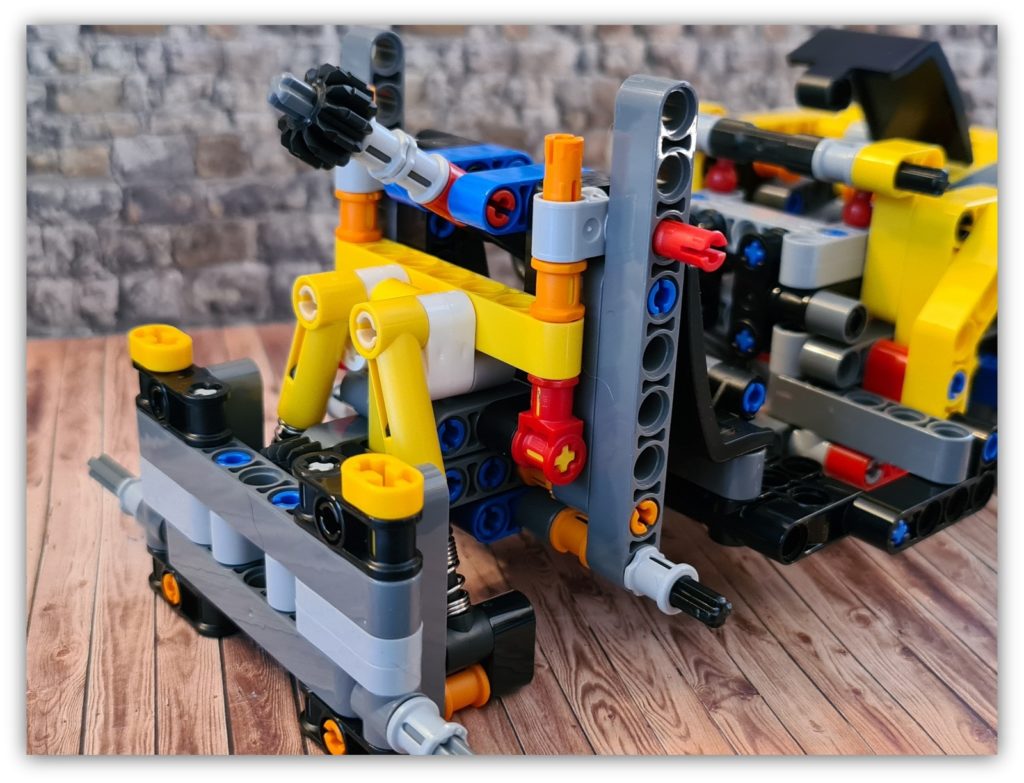 Although there is independent axle movement front and back on this build, there is only suspension on the back axle of this vehicle. It is also quite a stiff suspension too, but that does mean the vehicle holds firmer and returns to true when you press on the side to get the movement.

That said, the axle movement does allow for some effective looking images when the weight is over a wheel. We will cover that again when we explore its off-road capabilities. 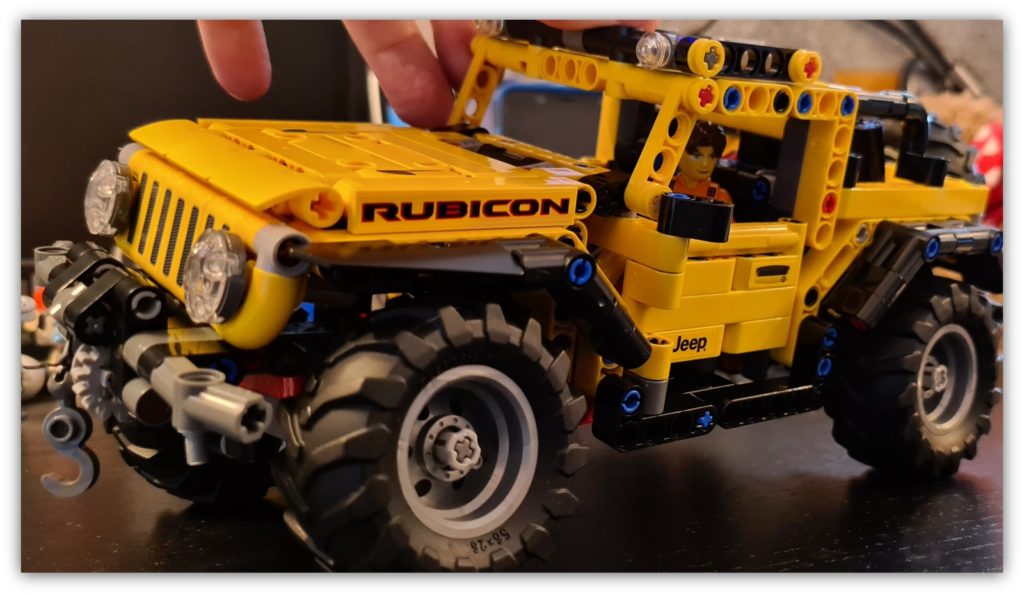 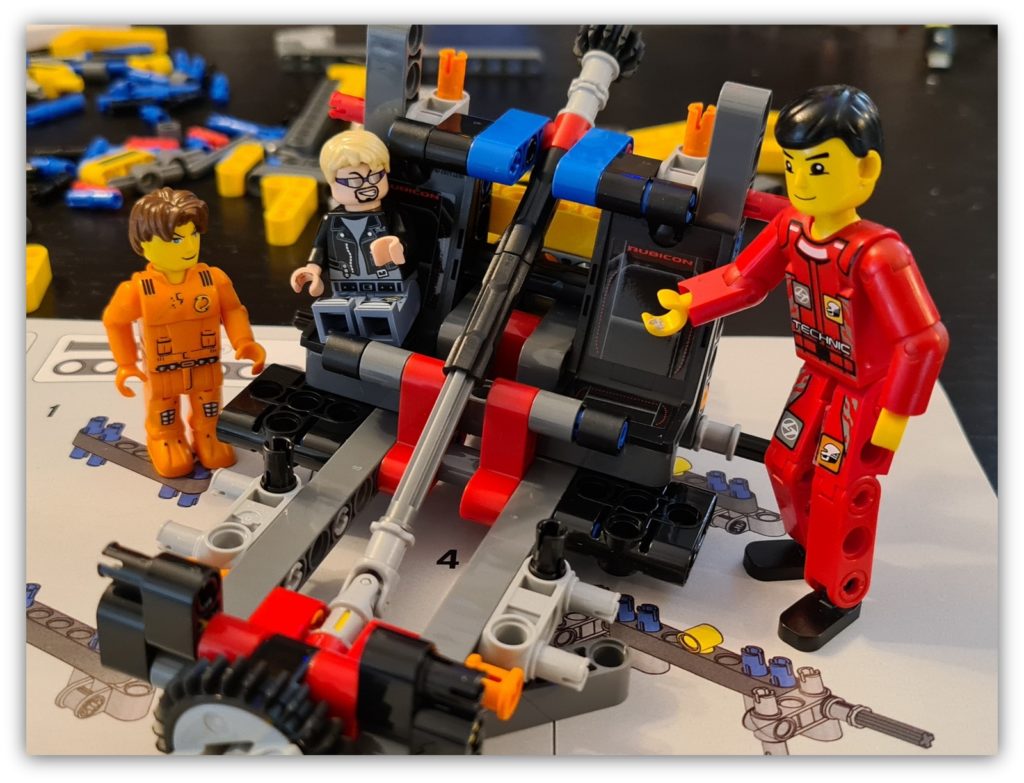 My impression of a Technic set is that it is more than just a Creator set with steering. As mentioned earlier, there is suspension at the back, but there isn’t anything really technical about the axle movement in my opinion. But the set does have steering to the front wheels.  This is managed by a rod running through the cabin area, under the engine and out to the front (as can be seen in the image above). 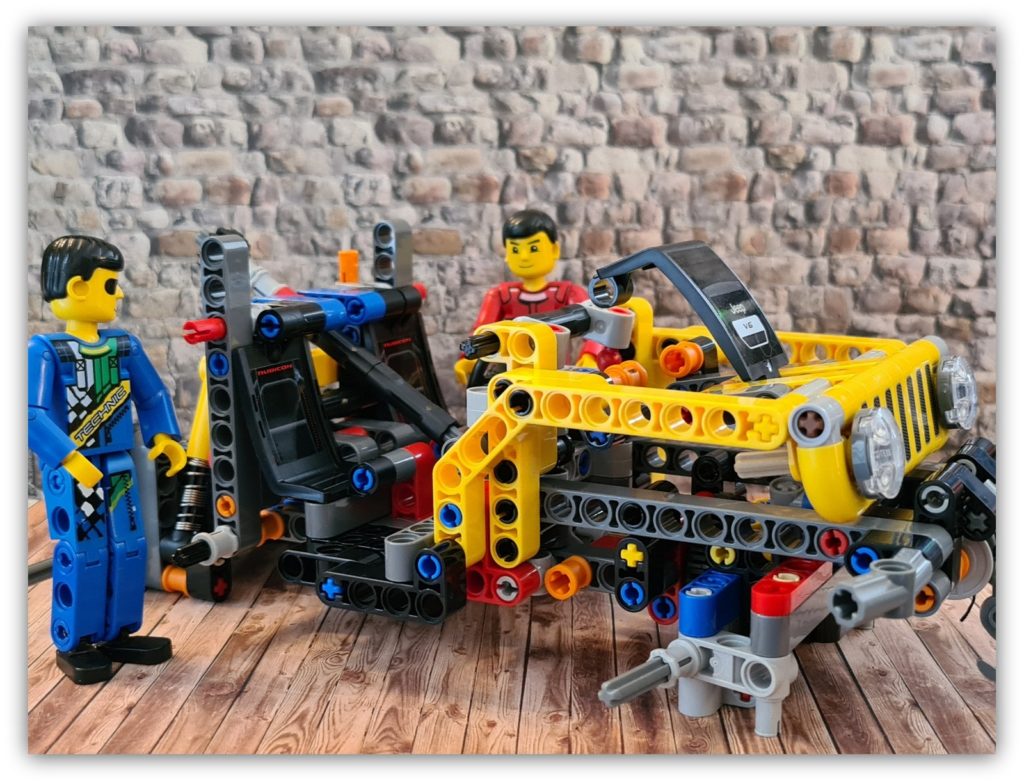 From there it connects to the front axle. It’s not rack-and-pinion steering but it is effective. By keeping the “hand of God” steering wheel (the one that actually steers the vehicle) small rather than using a normal wheel mounted somewhere obvious, it does not look too out of place in the final build if the intention were to display it.  However, it does mean that the ‘real’ steering wheel in front of the driver is only there for effect. I think the “wow” factor would have been improved if the two had been linked.

My other observation on the steering is that the turning radius of the final vehicle is really huge and probably far more than the actual vehicle. 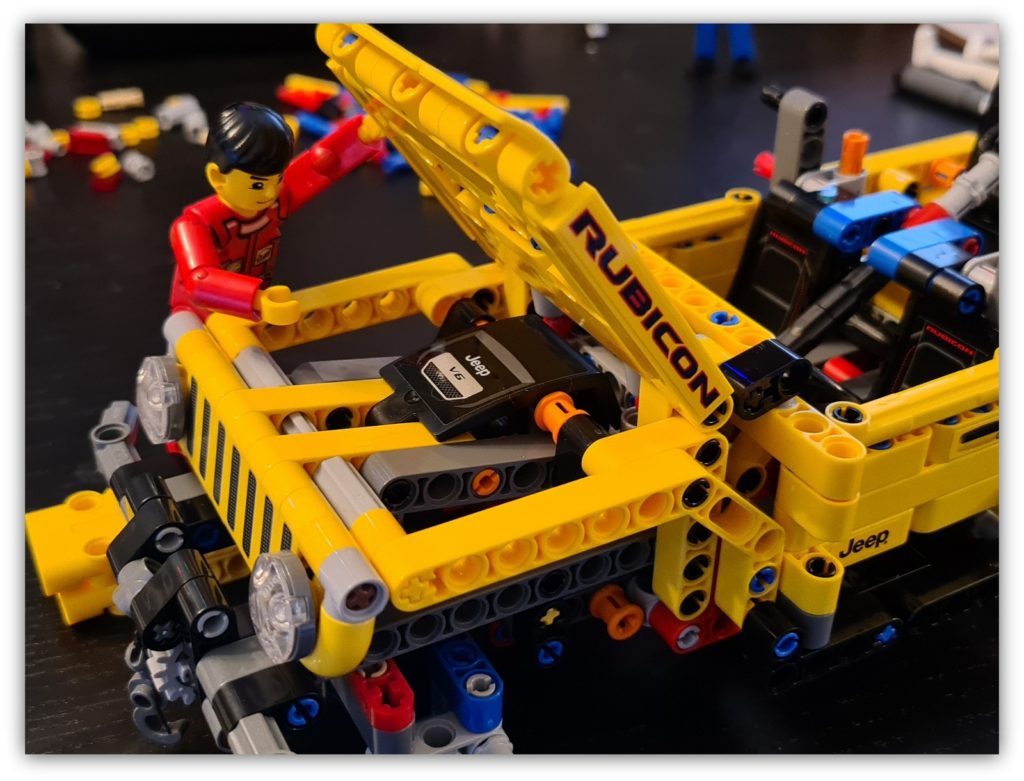 One of the features of the car is the fact that the bonnet opens (or hood if you prefer).  Now I found this image of a Jeep Wrangler engine on Pinterest for comparison: 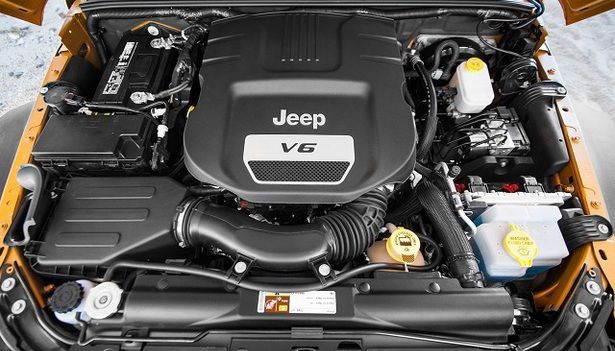 Whilst the black Jeep V6 is present, there is very little else of the big block of 2.4 litre engine present in the bay. To be fair though, with the supporting struts of the front grille there is not much space for anything else though.  I did like the way the bonnet (hood) sweeps down at the front.

Yes, this set comes with them. Fortunately, none of the stickers go across parts and elements, so you can fit them relatively easily without worrying about what to do if you decide to unbuild the set later. The front grille is pre-printed, but there are stickers for other parts. We have already seen the sticker that sits on top of the engine block; there are also stickers to go onto the seats and the bonnet of the vehicle.  What I appreciated this time is that where the sticker edge is, the image is contained within that. So often I have found that some of the image bleeds outside of the sticker, leaving some of the design on the sticker sheet and not on the build where it should be.

As always though, some of the stickers do need to be fixed squarely as if they are slightly skewed, they look very out of place.  I would also point out the image above; that is one sticker running the whole width of the cabin. 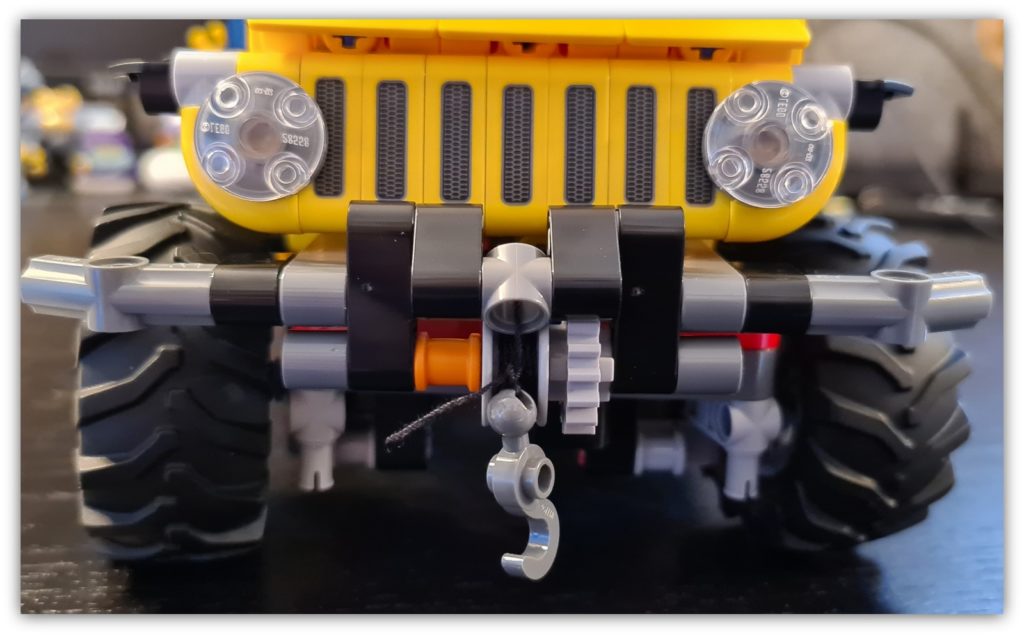 Yes, this LEGO Technic Jeep Wrangler comes with a winch! It is a simple construction where the line is fed out (or reeled in) by using the cog on the right. There is no ratchet to lock off the line once it has been fed out; but there was enough resistance when I took it off road. 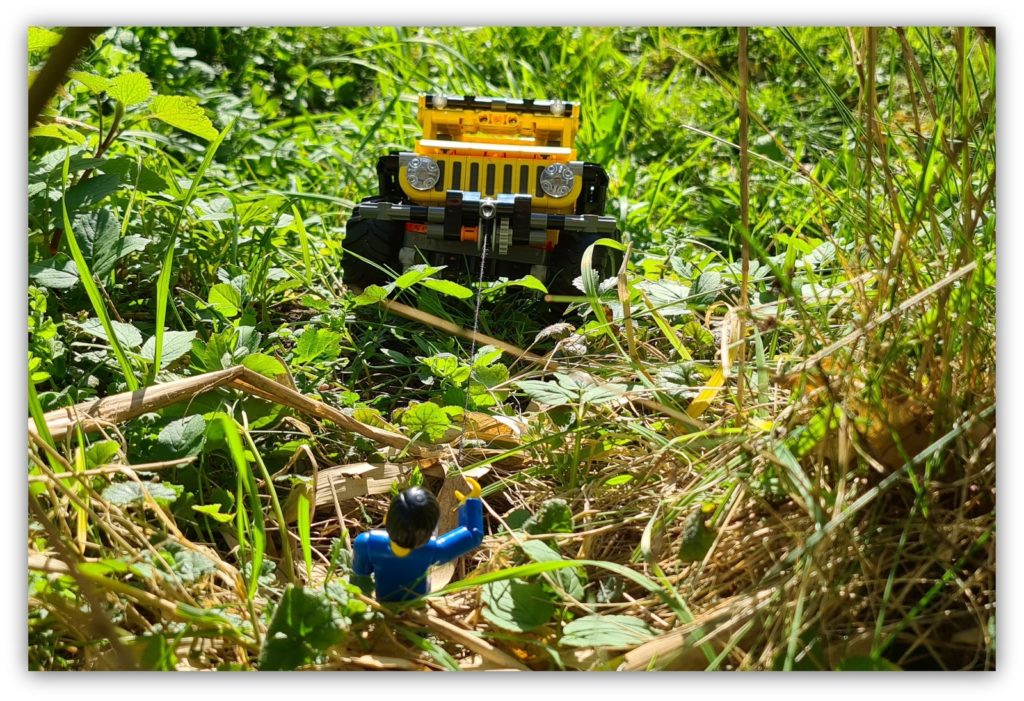 So far, this set has been a joy to build and create. Everything looks to be to scale, and my Technic figures were happy. However, they discovered a problem; they could not fit in the cabin of the Jeep! I did wonder if a figure with a little more mobility might work, but that was not the case either. The bucket seats are too deep for LEGO figures whose legs will not bend past ninety degrees. As you can see in the two images above, I spotted this before I put the roof on, but it did not get any easier once that was fitted; in fact, it made things more challenging. 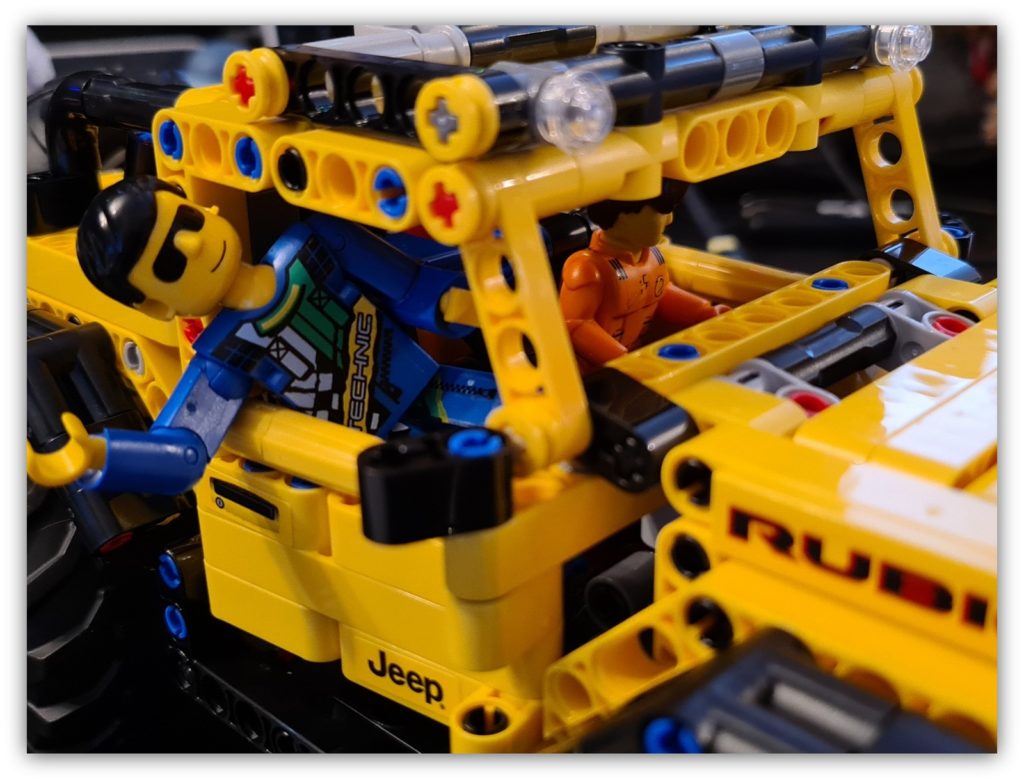 My figure in Blue is in as far as he could go; that roof was too low. But the door shut, so that was a positive.  Jack Stone can see out, but his feet cannot touch the pedals (which does not matter as there weren’t any)

I suppose this should not matter. LEGO have not produced Technic figures for many years now so having sets that fit a particular scale should not be a concern; but for me it’s a bit annoying. 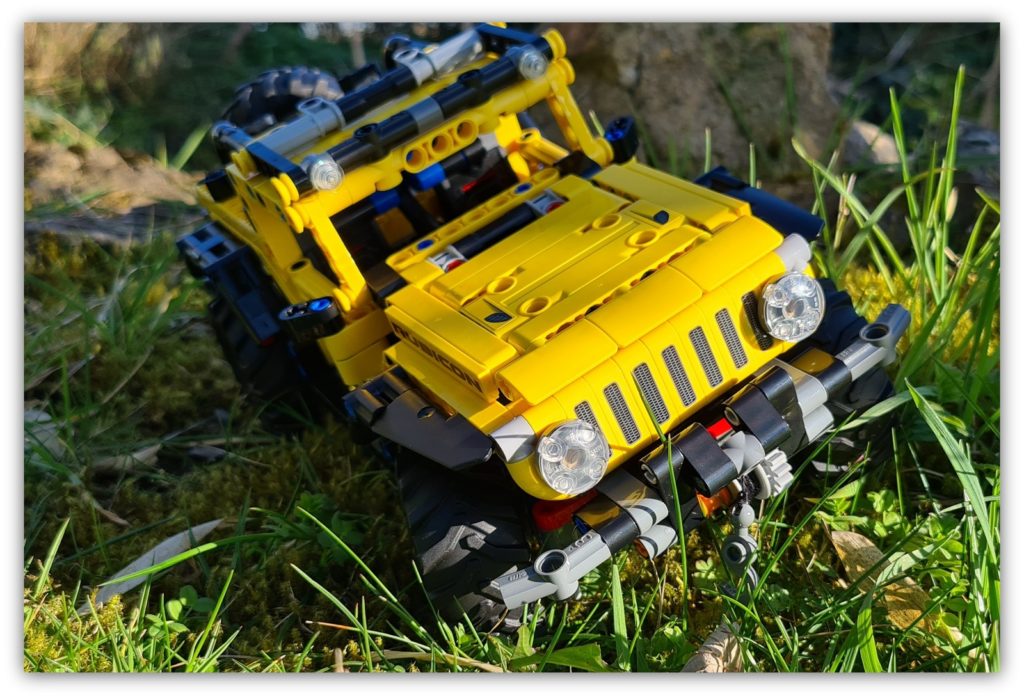 I think it is reasonable to test an off-road vehicle off road; fortunately, my garden had not been mowed so I could take it off the desktop and out. Driving across the grass was not a problem, the ground clearance meant that this was not going to slow it up. At the end of the garden was a steep 1:1 incline and the guys needed to deploy the winch to assist in the climb.  We found that getting the hook into the earth was a challenge, but it was able to make the climb. And as you can see in the image above, the Jeep was equally at home scrambling over the rocks. 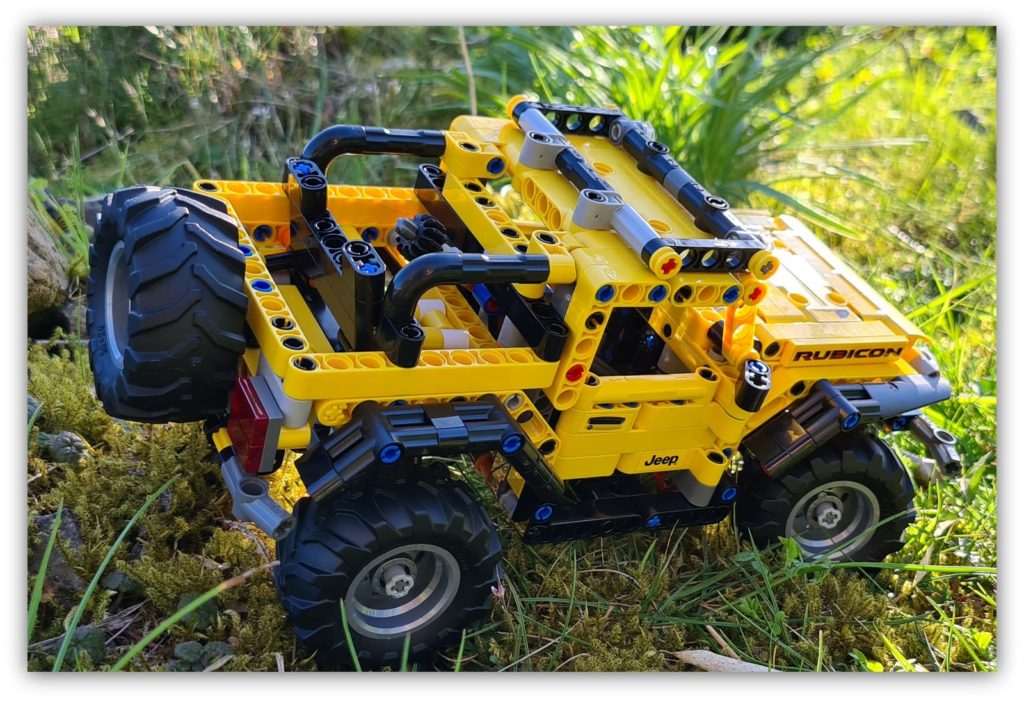 With sets like the Architecture series, or the Expert sets like the Fiat 500 or the Harley Davidson, the manuals had a few pages about the vehicle, the history, and details of the real model. Apart from a double spread comparing the Technic model to the real Jeep Wrangler there was none of this additional information which I think was a shame and a marketing opportunity for Jeep and LEGO. I do not know how much LEGO paid for the franchise, but it is not like LEGO haven’t created a 4×4 off roader before. 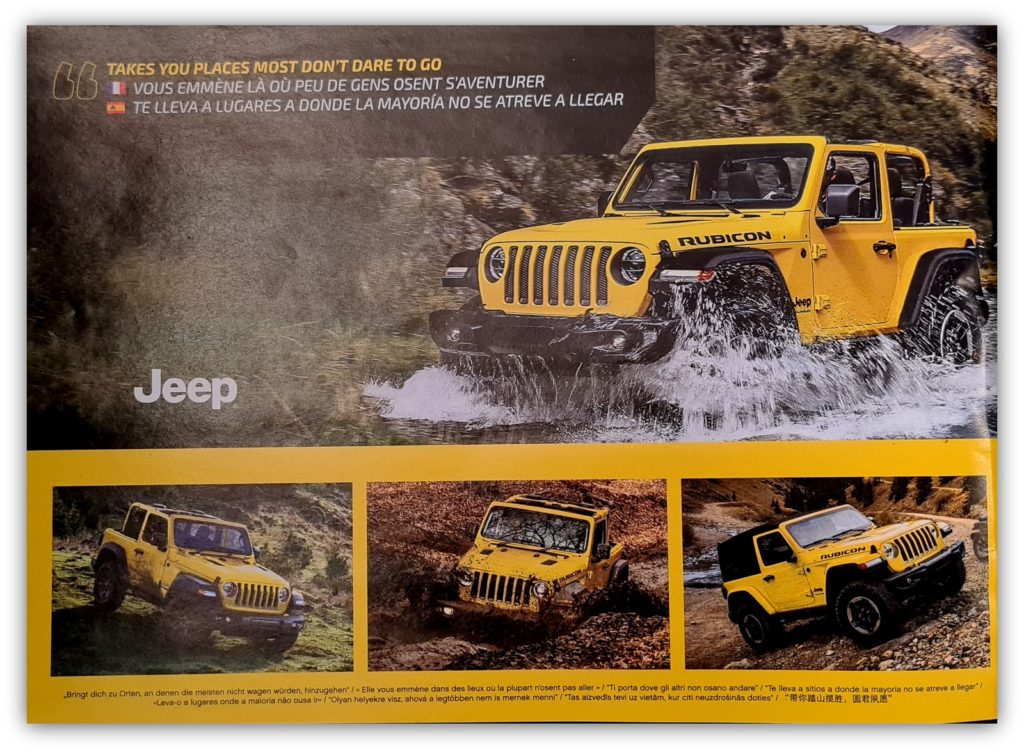 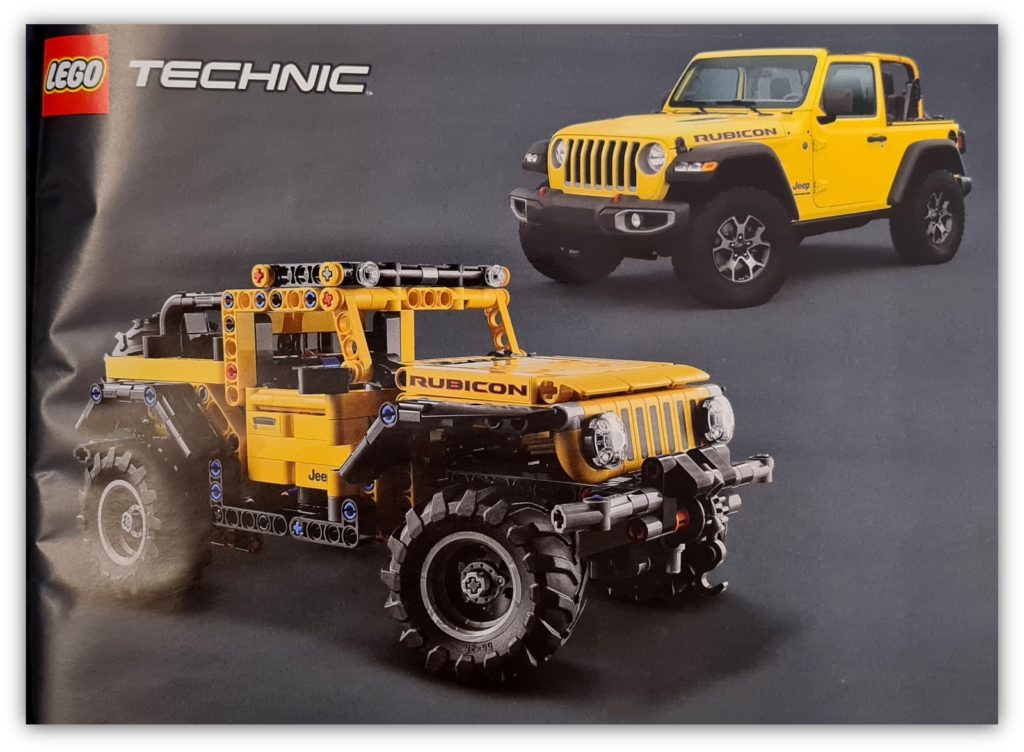 If you are someone who already owns a real Jeep Wrangler, or if your dream vehicle is a Jeep, then this is a really nice LEGO set to have on your display. Given that the last Technic off road vehicle LEGO released (looking at Brickset) was in 2019 and cost £199.99 then this is a very reasonable model, given it is less than a quarter of that at £44.99.

I enjoyed the build. I acknowledge that looking at images of the real Jeep Wrangler Rubicon and this model you can see the differences in shape, but somehow it doesn’t matter, this is a LEGO Technic car that has “whooshability” and will cope going off road; at least, the garden.

Interested in LEGO Technic sets? Read more about them here.