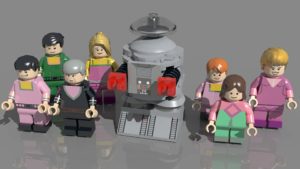 Being a kid in the late 1960’s, watching UK TV wasn’t always an option. When I wasn’t playing with my LEGO, usually I got told to go play out side, regardless of the weather! That is if your family even had a TV and when you did get to watch it, you didn’t get a choice as to what to watch. My family TV was a black and white number that looked suspiciously more like a piece of furniture, and it rolled on wheels. We were limited to only 3 stations and one of those shut down after 8pm.

Not that I ever got the chance to confirm that, as bed time for me came even earlier. When I did get the chance to see anything, usually it was after school as that was mainly when the kid shows started, normally. It was on one such rare occasion that I first saw the series Lost in Space. The episode? “The Stowaway” written by Irwin Allen.

Lost in Space told the story of a family called Robinson who left Earth due to over-population. They tried to find a new home in space, using a saucer ship that came with a robot. All seemed to be well, until villain Zachary Smith mucked about with navigation on the ship. His acts resulted in the family being “lost in space”. Strangely, though, it suddenly got better. Mind you, as the episodes progressed the stories just got silly, and though it always ended on a cliff-hanger you got the feeling they’d always find a way out the latest terrible situation.

What amazed me more than the show itself was the fact that the spaceship was full size and the chance to see more of it improved with each episode. That amazing ship could do everything; everything except get home. Which is why, corny as it was, I loved the show. The original series lasted 3 seasons from 1965 to 1968, but because of syndication we got to see it again a few years later, though it did not improve with age. Roll-on to 2018. Netflix have decided to reboot the Lost in Space series, this time better stories, bigger budget, and bigger sets to boot. In my opinion, they’ve done a good job, as this is not the first time the networks have tried to make something of this series only to fail miserably. (Four times I think?) But for me, there was something quirky about the 60’s show that I loved.

This is when LEGO came into the picture. Toys based on US TV shows, however popular, seldom saw the light of day here in the UK, and if you did see one, you couldn’t afford it! Building such things out of LEGO became the best chance to ever get them. That’s what I did. Okay, my LEGO Lost in Space ship wasn’t saucer-shaped, it came in two halves, and I didn’t have enough white bricks at the time, but it looked the part to me! This brings me once again to LEGO ideas. Several LEGO fans with a passion for LEGO Lost in Space created Minifigures and sets based on the show. In my opinion, they are the best LEGO Ideas proposals yet, and worthy of a few sets. Perhaps not as many as Star Wars (for example, perhaps due to lack of material) but a few good sets nonetheless.

The theme I suggest would be based on the 60’s version of Lost in Space, as that one is most remembered. The robot companion would have to be made as close to the mini figure size as possible. Too big, and he would look out of place. This example to the right is probably one of the best I’ve seen of the 60’s robot that’s out there. 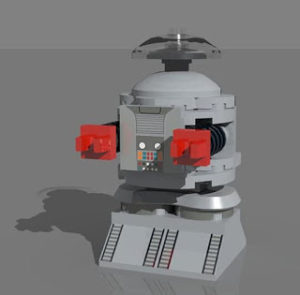 All the parts to make him have already been made by Lego, just the colours are different. I have managed to build this robot as a test to see how he looks and in terms of playability “it works” and is not that fragile either. This is just a well thought out design.

Other examples of good builds have been of the ship, again a well thought out design and with playability to boot! I just wish the designer had included instructions and a parts list. The build is that good! Also, to explain this kooky series, if the transition to Lego was ever possible, I have noticed that in the last few Collectable LEGO Minifigure series that a Cactus, Corn and Water Melon figure have made an appearance. If a carrot guy were to show up in the next series release then you’d already have some of the characters!

It terms of family values, Lost in Space had them all. 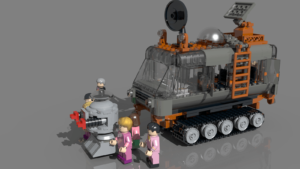 I’d like to think LEGO would jump at a family related show, alas, the proposal didn’t make the cut. What a shame!

This show proposal had such potential: from TV series to LEGO Lost in Space. The only problem I could see is in building the saucer ship: Jupiter 2. It never looked an easy design to cross over into LEGO. To date, I’ve never seen a custom ship that could match up to the LEGO standard. Perhaps this could be a challenge? There was also a shuttle-pod, but again no one I have seen has even made one.

I suppose it’s all down to how much kids remember. By today’s standards, the 60’s Lost in Space seems pretty tame. But there are a lot of kids (now adults) who looked back and thought this was one great show. As for villain Zachary Smith, why they didn’t chuck him out the air lock, I’ll never know! I hope LEGO will revisit this someday and give it a second chance.

The new Netflix series already has custom LEGO Lost in Space robots and ship constructed. With the second season in production, I believe it has plenty of material to work from. Certainly, the story differs from that of the original, which I think is for the better this time around. As for custom designers, there is that scope where just making the faceplate of the robot as pictured would be a small step into making this set possible. A Zachary Smith Minifigure, too would be good (even though I hated the character!). They were the R2-D2 and C-3PO of their day.

For more sci-fi themed LEGO, check out our review of the brand new Stranger Things LEGO Set. If you want to read more about projects that haven’t come to life, check out this article on LEGO Galactica.