If you’ve ever been into a comic book store – the proper kind, where they sell board games, tabletop RPG supplies, card games, and have local tournaments for all of the above day-in day-out – then you’ve almost certainly come across Magic the Gathering. You’ve probably seen the price tag attached to some of the booster packs and wondered why anyone would possibly pay that much for one. Even if you haven’t been to a store like this, you might’ve heard the name, as one of the go-to examples of a quintessentially nerdy, fringe culture past-time. It’s gained more popularity (and social acceptableness) over the past few years, but certainly from what I’ve seen, nobody’s really attempted to translate Magic the Gathering (which I’m just going to call MTG going forwards) into LEGO. While the likes of even Seinfeld are getting official sets, and every other TV show under the sun having its cast of characters edited by LEGO artists on Instagram, it’s actually quite surprising given MTG’s visual interest that it’s been mostly left alone.

What is Magic the Gathering?

MTG is a card game first published in 1993. Despite what I said before about it being traditionally a fringe pursuit, in 2015 it was estimated to have reached twenty million players worldwide. It’s published by Wizards of the Coast (a subsidiary of Hasbro, which might present a barrier to any LEGO Ideas projects based on the game) who also publish Dungeons & Dragons, the world’s most popular tabletop RPG, and the two games actually have a fair amount of crossover.

The game is fantasy-themed, though rather than being set in a singular location like Middle-Earth or Westeros, MTG’s cards depict characters, objects, locations and events from across a fantasy multiverse. Each world, or “plane”, has similarities to the next, but is its own miniature universe with its own rules, creatures, cultures, and so on, which honestly makes it one of the most unique fantasy continuities out there. You, as the player, are a Planeswalker, a sorcerer with a special “spark” that lets them traverse the multiverse at will, hence how your cards can represent many different planes at once. Within the story of the game (yes, there are now books and comics), there are actual Planeswalker characters, but I’ll get to them in a moment.

The cards are also split into five primary categories based on the game’s five types of magic, and each “colour” of magic has its own unique uses, play techniques, and styles. These are: red chaos, war and fire magic; blue manipulation, psychic and water magic; green nature and life magic; white light, purity and order magic; and the baleful black, necromantic magic.

The game itself is complex, in part because you can build your deck from over 20,000 possible cards, and something I’ve personally not been able to get into, but as a creative environment… well, over the past few years I’ve been sucked in. I’ve bought some cards, some D&D guides for setting your adventures in one of MTG’s planes, and now I’ve finally turned my hand to combining it with my biggest hobby: LEGO. Somebody had to make some LEGO Magic the Gathering characters, and the game offered the perfect place to start: the Planeswalkers.

Born on the plane of Vryn but forever tied to the sprawling metropolis of Ravnica, Jace Beleren is one of the most widely recognised characters in Magic the Gathering, so it seemed fitting to create his LEGO minifigure first. Wearing a long green or blue cloak and bearing spiral tattoos on his face that match the patterns on his clothes, Jace is a master of illusion, and of psychic magic. Self-taught and endlessly curious, Jace can modify his opponent’s memories, or throw up and illusion to evade a battle. He is also the Living Guildpact, an embodiment of the fragile peace between the once-warring guilds of the plane of Ravnica.

Breath out. There’s a lot to unpack there, for sure, but trust me when I say that if I don’t keep things brief, we could tumble down the MTG lore rabbit hole for hours. Jace is smart, crafty, keeps to the shadows, and can alter memories. That’s basically all you need to know, but the MTG wiki is there if you want to read more. 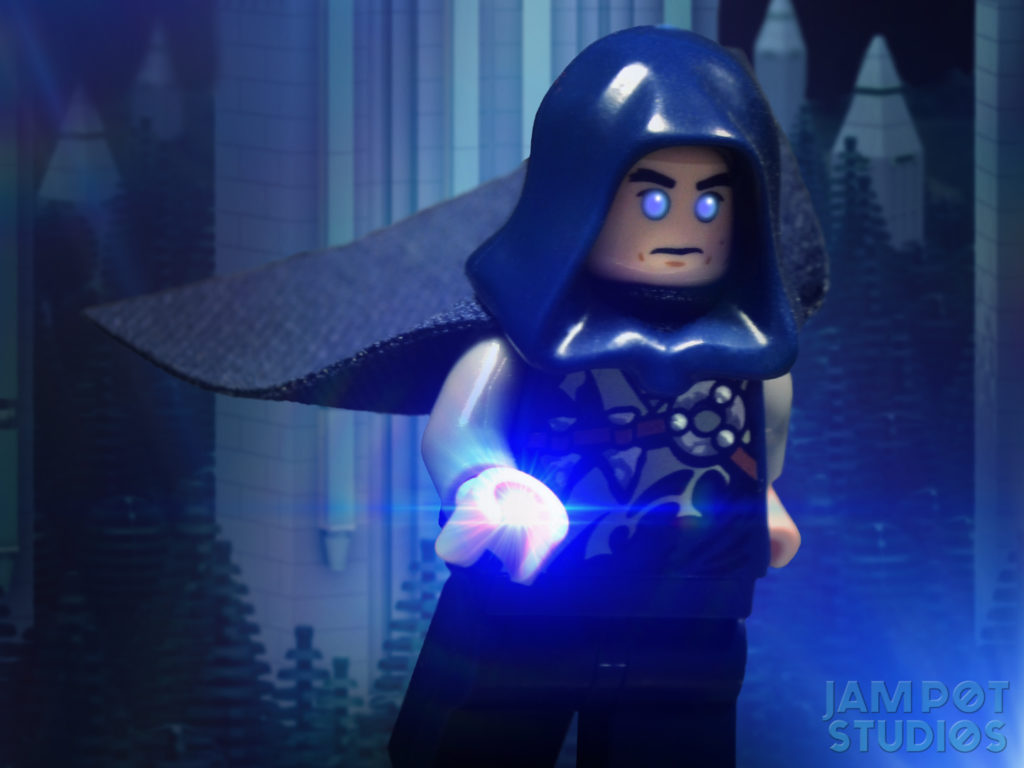 I’ve had Jace built for a while, and in fact finding the face I wanted to use for him was what inspired me to do a whole series of Planeswalker minifigures. The head is from Chirrut Îmwe from 75152 Imperial Assault Hovertank. The blank white eyes look as if he’s using a psychic spell or casting an illusion. The only downside is the lack of facial tattoos; I tried to add those in Photoshop, but unfortunately they didn’t come out right so I dropped them altogether.

The torso is from a Ninjago ghost, from the Possession arc, and I think the various circles sell Jace’s spiral patterns well. Pop on a dark blue cloak and hood, and we’re there!

Hailing from Theros, a plane of gods, monsters and Clash of the Titans fanfiction, Gideon Jura is a hieromancer, using the power of white magic to bring peace and order to the multiverse, routing evil wherever it hides. He also changes his name on a dime, as he was actually called Kytheon Iora but changed it because…reasons?

His armour is somewhere between a gladiator and a knight, so I ended up using a torso from the Kingdoms line to represent it. I did have to Photoshop out the crown symbol from the breastplate, and while it completes the effect, it is sad that this means I don’t have a “perfect” Gideon in real life.

The cape he uses is from the Disney Minifigures Series 2 Hercules, both for its colour and its shorter length. His hair is supposed to be a very dark shade of brown, but black actually turned out to be a better match in LEGO form than dark brown. I did have to edit the facial hair from Kanan Jarrus’ headpiece to match the hair, but since I’d already committed to this being a digital-only minifigure, that wasn’t much of a problem. 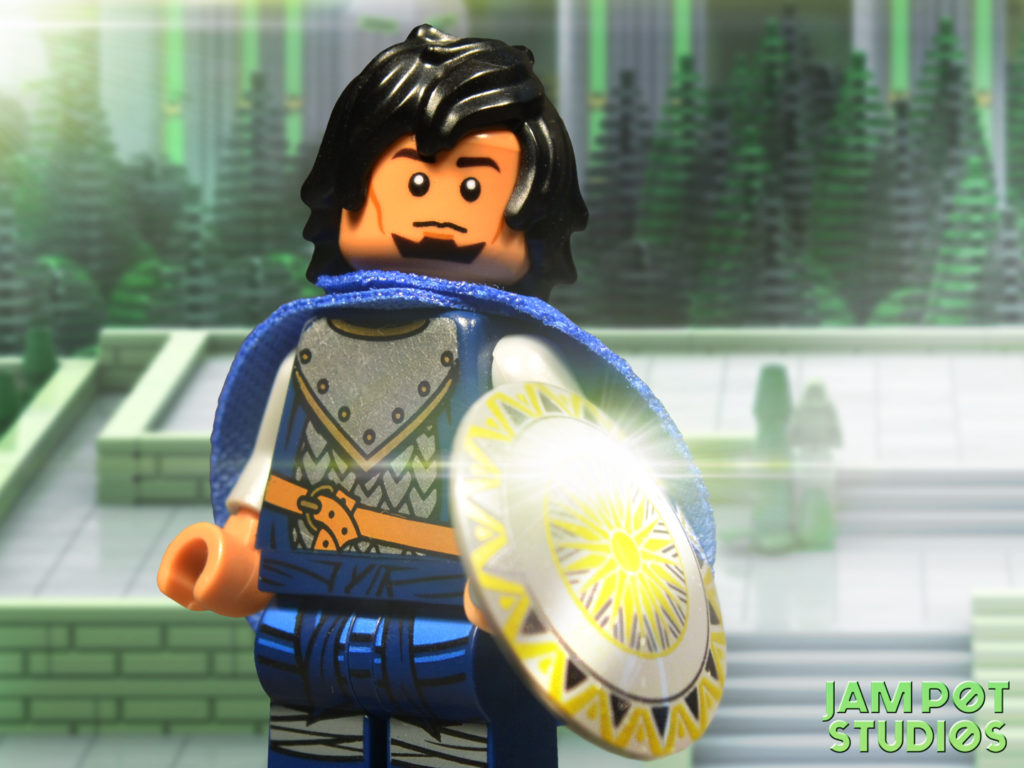 As deadly as she is beautiful, Liliana Vess is a necromancer, a master of the black magic who summons the dead and binds them to her will. Born in the forests of the central plane Dominaria, Liliana hungers for greater power, striking deals with other Planeswalkers and ancient gods in order to achieve her dark goals. She is also more than a hundred years old, despite barely looking a day over thirty, but if the most recent stories are anything to go by, those long years might finally be catching up to her…

This minifigure actually took the most editing, and is one I’d love to try and create entirely physically in the future. Starting at the top, she uses Wonder Woman’s hairpiece, with the star on the tiara edited out. Her face is from Naare, from Star Wars: The Freemaker Adventures, which aren’t a perfect match for Liliana’s actual facial markings but are close enough. 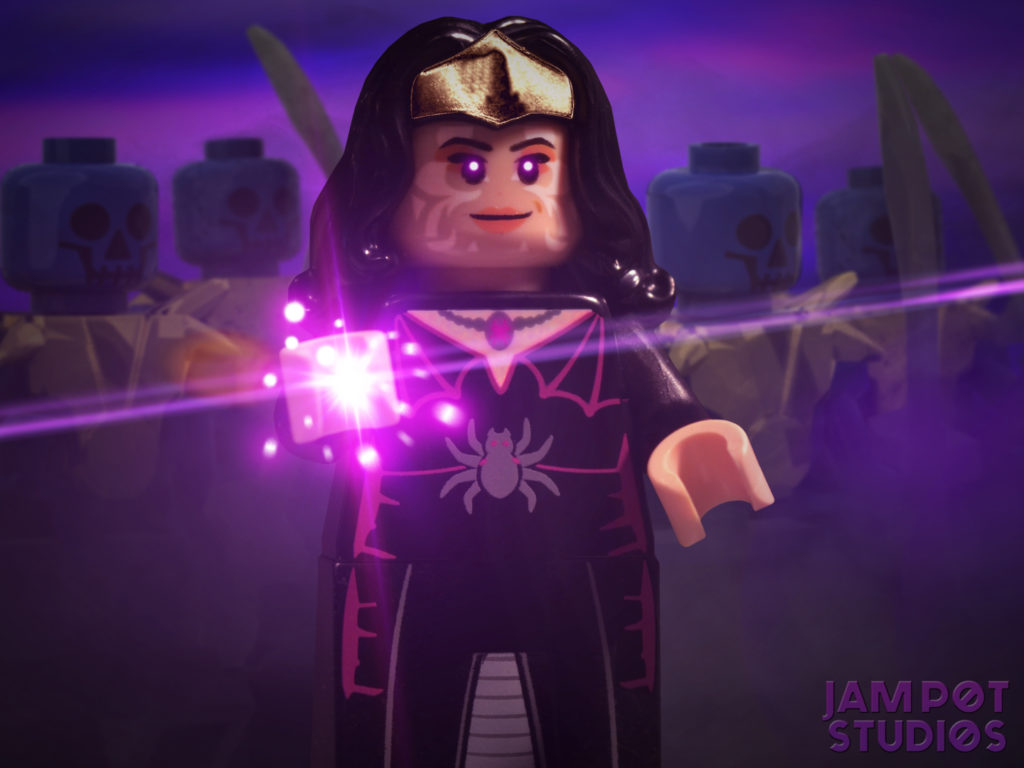 Moving down, Liliana’s torso is actually a recolour found only in the Build a Minifig towers in LEGO Stores, with the collar area edited from pale grey to Lilana’s flesh tone. Her dress is from Narcissa Malfoy, but I edited the details heavily to lower the central ladder of the dress, and to replicate some of the details from the torso, making it all seem like one cohesive pattern.

As for the creepy skeletons behind her? Well, imagine taking an undead army and dipping them in a hard shell coating. Sounds terrifying and unstoppable, and that’s basically what Vess and one of her associates did – I just had to include them!

She’s called the “Unseen” because you really wouldn’t want to see her: Vraska is a gorgon, able to turn others to stone when they look into her eyes. Born in Ravnica’s vast and dangerous Undercity, Vraska is part of a clan called the Golgari Swarm. She is a sometimes-enemy sometimes-lover of Jace Beleren, and also a part-time pirate. Yes, in 2018 she hopped onto a pirate ship for the Rivals of Ixalan expansion, and it’s partially on that costume that I’ve based this minifigure. 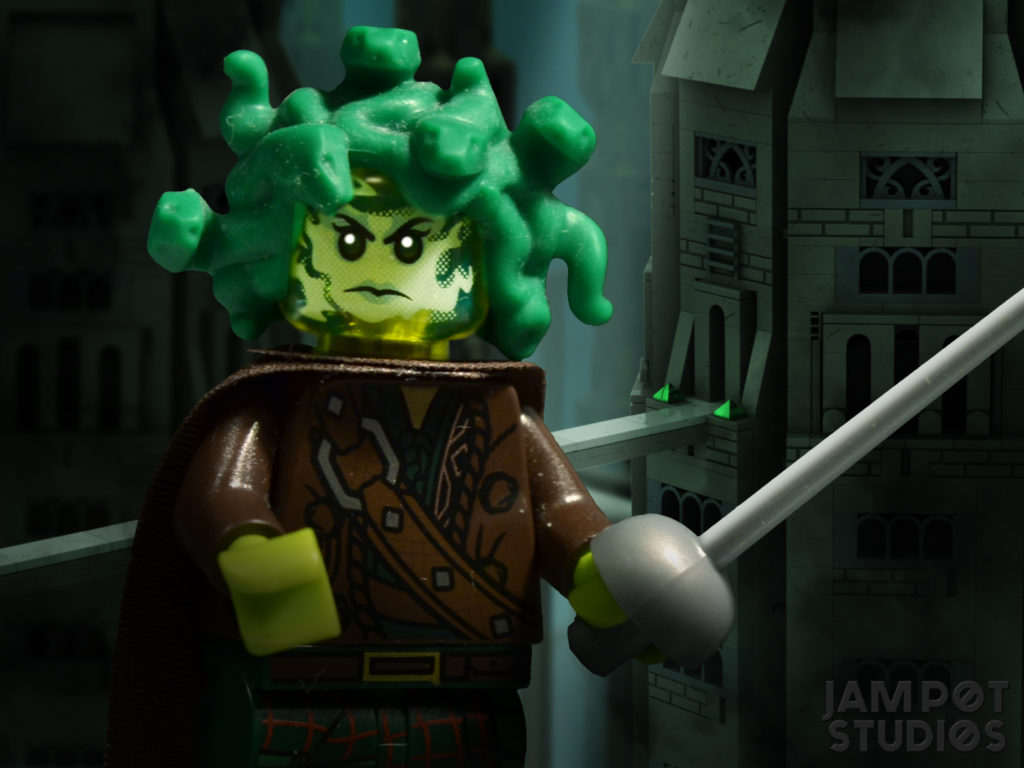 LEGO have made gorgons before, the first time being in 2013 for Medusa from the Collectible Minifigures Series 10. I’ve reused the hairpiece here, as even those Vraska’s hair is a mess of tentacles not snakes, the hairpiece has the same effect. Her face is trans-green and comes from Blade Master Bansha, from 70731 Jay Walker One – I’ve used pieces from Ninjago’s Possession arc a lot for this project, while her torso is Kili the Dwarf’s jacket, from The Hobbit. It’s not strictly speaking “pirate garb”, but looks the part. I’ve also given her a rapier, a reference to the card “Vraska, Scheming Gorgon”, on which this minifigure is partially based.

It would be really nice to create some of Vraska’s other outfits, but LEGO needs to create a few new pieces for that to happen. Who knows though – Ninjago and now Monkie Kid are consistently creating interesting new pieces, and there’s no telling what they might offer next!

Finally, we come to Chandra Nalaar, my own personal favourite Magic the Gathering character – naturally, I just had to build her in LEGO form. A pyromancer from the golden cities of Kaladesh, Chandra is hotheaded and direct, leaping into battle with her fists ablaze, a fierce mania in her eyes, and usually accompanied by creatures constructed out of the flames. Aside from some internal miscommunication at Wizards of the Coast about her sexuality (a squandered opportunity for pansexual representation) she seems to be a fan favourite, likely in part for her striking character design but just as much for her headstrong, damaged and secretly compassionate nature.

Obviously I wanted to get Chandra right, and luckily like Jace, she’s one of the few characters I was able to make “for real”, without having to do any digital trickery. Her torso and legs are from Macy Halbert, from Nexo Knights, which looks relatively close to Chandra’s mix of plate armour, chainmail and fabric clothing. For her pauldrons I used a silver Chima chi armour piece, which is a tad bulky but does the trick.

Now, one of Chandra’s most recognisable features are her goggles, and unfortunately LEGO doesn’t do a ginger hair/orange-tinted goggle mix, so I settled for using Jillian Holtzmann’s face from 75828 Ecto 1&2. This way, her goggles are down on her face rather than up on her hair, which isn’t too much of a departure from the character’s design, and allowed me to finish the minifigure off with some fitting short ginger hair. In her digital environment, flames burning around her, I think LEGO Chandra really does look the part. 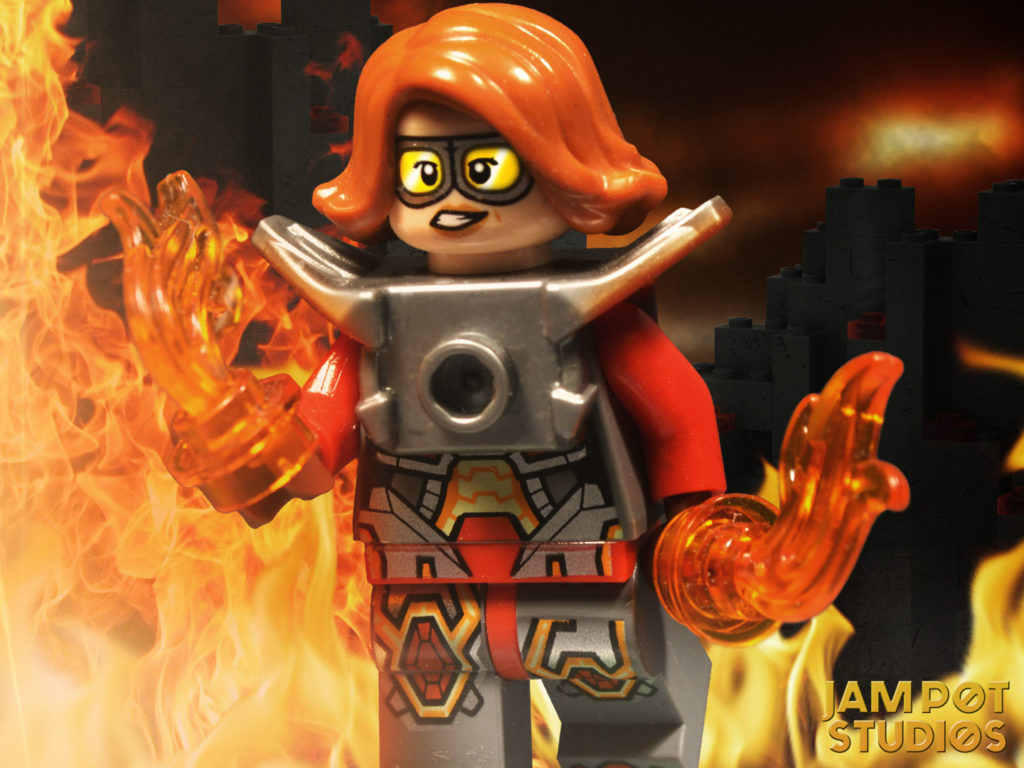 That’s about it for my first attempt at bringing Magic the Gathering to life in LEGO! With five of the main characters done, I think that’s a pretty good start, and puts me in a good position to expand on this fictional theme later. Sure, LEGO are unlikely to make official Magic the Gathering sets, but that won’t stop me from giving Jace, Chandra and co monsters to fight, ruins to explore, and much more in the future. The MTG multiverse is huge, so who knows what I’ll build next?

Wondering about those backgrounds? Well, they’re a story for another blog post, but let’s just say it’s amazing what you can do with Stud.io, Photoshop and some MTG art for reference.

Interview with an AFOL: tiagoreiscatarino