WARNING: This article contains spoilers for The Mandalorian! 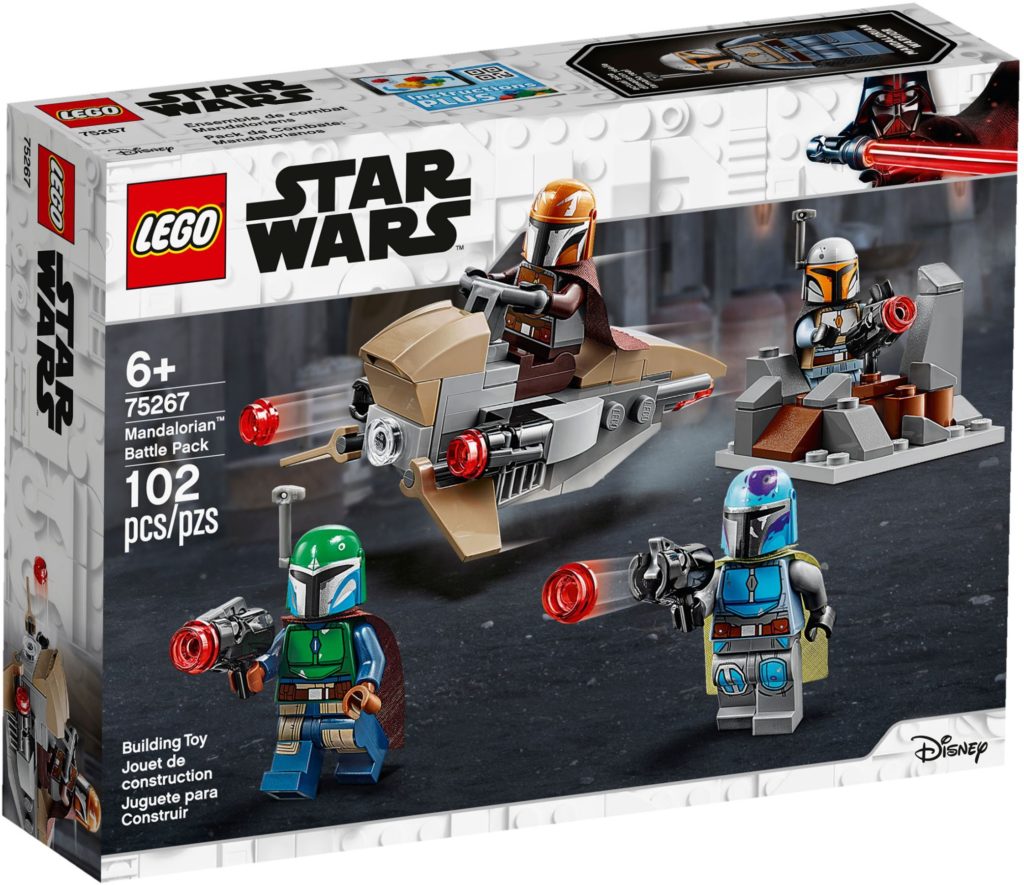 We’re now well and truly into 2020, which means a new wave of LEGO sets has hit store shelves across the world (if a little later in some places thanks to shipping delays). Wish lists are being furiously updated, wallets are being emptied, Bricklink’s parts guide is expanding, and of course LEGO Star Wars collectors everywhere are making space for new squadrons in their army builds. Yes, it’s time for more Star Wars battle packs, and both offerings for winter 2020 are intriguing and sure to provide builders with plenty of inspiration. Here, I’ll be taking a look at LEGO Mandalorian Battle Pack, set 75267, one of two sets based on the hit Disney+ show The Mandalorian.

At a first glance, you could be forgiven for thinking these four folks are just brightly-coloured doppelgängers of Boba Fett. After all, they wear the same style of armour with the same distinct helmet shape (and if you read my review of 75266, you might be starting to see a pattern of recycled and recoloured designs). These are in fact Mandalorians, members of a warrior culture from the planet Mandalore, fierce combatants with a creed of honour, strength and family binding them all. One doesn’t have to be from the same planet or species to become a Mandalorian, as is clear with the Disney+ show’s protagonist, but likewise wearing the armour doesn’t automatically make you one either (it is implied Boba Fett and his father Jango simply stole the armour rather than earning it).

In recent years, the Mandalorians have become almost as integral to the Star Wars universe as the Jedi and Sith. The clash between their warrior past and peaceful present is the crux of much of Star Wars: The Clone Wars, shadowy alliances with the Empire and civil wars are present in Star Wars: Rebels, and now we have The Mandalorian, on which this set is based, which explores the mentality of a single mercenary from this culture. Without saying too much, it’s a wonderful show, a tonal departure from much of Disney’s other Star Wars content but a welcome one, and it gives us a much closer look at how the Mandalorians have adapted to life after the fall of the Empire.

The four Mandalorians in this set are part of a secretive enclave hoping to rebuild their society, the mantra of “This is the way” pervading everything they do. Their armour is individualised, possibly reflecting bloodlines or clans instead of being one unified, militaristic force. And oh boy, does their appearance in the show leave quite the impression.

With all that said, let’s take a look at the set itself.

There are four Mandalorians in this set, each one completely unique. While this makes for an amazing array of minifigures (which I’ll get to in a second) this does present a new challenge: is it possible to army-build a battle pack that’s made up of “characters”? Well, I’d argue this isn’t much of an issue. Various Star Wars shows and books have established that Mandalorians assemble in clans, so having multiple green or dark orange Mandalorians could be exactly that.

When I say “characters”, I don’t mean that any of these four Mandos are named, so let’s first look at the Grey Female Mando. The design on the minifig is excellent, detailed without being difficult to discern at this scale or being overly complicated, and the sand blue with orange highlights provide a nice contrast to each other, and a colour combination not often seen in LEGO sets. There is some simple printing on the legs too, and she comes with a black cape. For me, this minifigure is one of the highlights of the pack. Not only is the printing great, but she strongly resembles illustrations of Mirta Gev, Boba Fett’s granddaughter from the pre-Disney Star Wars universe.

Next is the Dark Brown Male Mando, who has the least printing but might arguably be the best for army-building. While his legs are bare, he does have the fewest singularly identifying features, making him the least of a “character”. I could definitely see myself getting a large number of these for an army as opposed to Blue Male Mando. 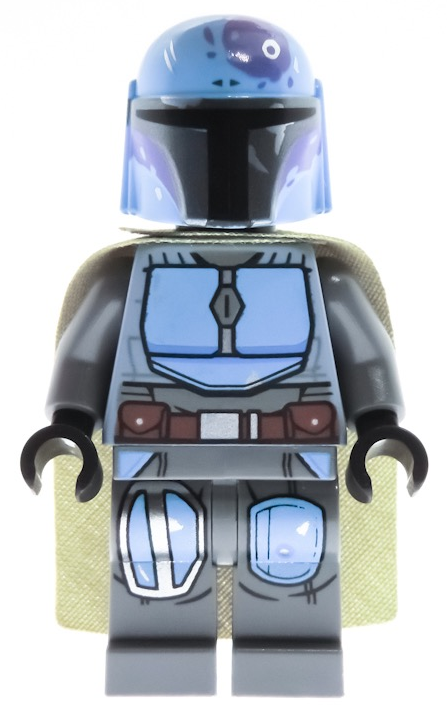 Blue Male Mando is an excellent minifigure. To my eye, it doesn’t look like he represents any specific characters from the show, though the blue is reminiscent of the Heavy Infantry Mandalorian from Episode 3. He is the only Mando in the set to wear a lighter cape. This one is a pale green, and his blue armour is pockmarked all over, including a huge purple welt on his head. As great a feature as this is, the purple damage does make him the most identifiable as an individual, and probably the least good for army building. 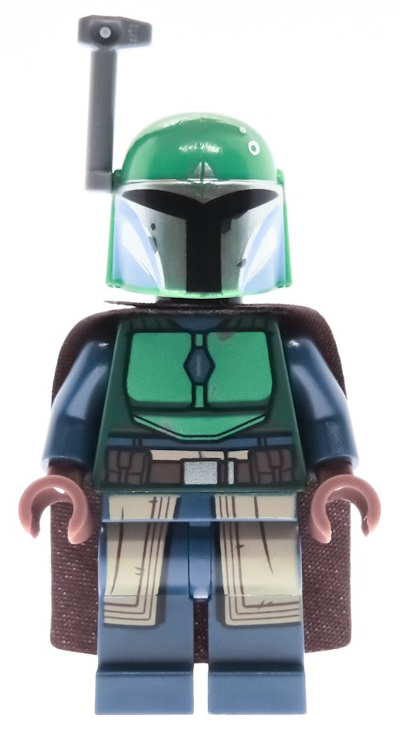 Finally we have Green Female Mando. Her body armour is a mix of dark green, regular green, and dark blue arms. She wears a brown cape and brown gloves, and overall the aesthetic reminds me very much of the forces on Kashyyyk or Endor, whose armour is painted to camouflage them with their lush environments. I could easily see this Mando as being ready for forest warfare.

Overall, it is a stellar set of minifigures. Perhaps it would take some modifications to army build a couple of them, but you could definitely create some interesting new factions from these.

As I said in my last review, the builds in battle packs have a habit of being quite boring or unrelated to actual Star Wars vehicles. LEGO Mandalorian Battle Pack is a little more interesting, as not only does it seem to be based on a real speeder – a Balutar-class swoop bike, as seen in Star Wars: The Clone Wars – it’s also a remake of a previous set. 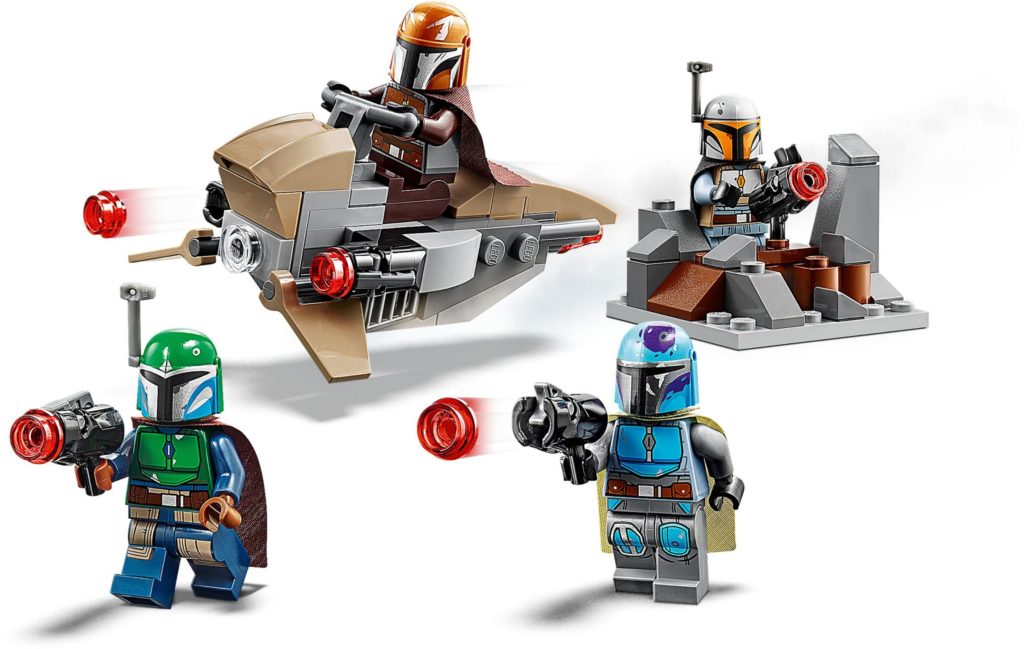 You see, we’ve had another LEGO Mandalorian Battle Pack before in the form of 7914, which represents a different time period for the titular warriors. The 2011 set was meant to represent the Death Watch clan from The Clone Wars, a faction who wanted to overthrow the then-current Mandalorian government and became embroiled in the machinations of Darth Maul. The set featured four minifigures, but these Mandos all wore the same blue-and-grey uniforms, like an organised military. They too rode a Balutar-class swoop bike, and comparing the two, their designs are quite similar. However, the newer version has traded a blue colour scheme in for a battle-damaged, desert-stricken dark tan and light grey pattern, as though it has seen many years of wear and tear, perfectly complimenting the dusty and battle-hardened aesthetics of the 2020 Mandos.

It’s great to see this level of continuity between these two sets, especially given that they’re a whole 9 years apart. The swoop bike doesn’t make an appearance in The Mandalorian, so it would have been easy for LEGO to just include more rock outcroppings or a mounted gun in place of a vehicle. Instead they chose to show the decline of Mandalorian society, just like the show did, which I think lends the set an interesting quality for collectors old enough to have the previous set.

There is of course some obligatory rock as well as the bike. It’s barely worth mentioning, as I’m sure after the second or third battle pack, army builders will simply dump these parts into their collection. It does provide some nice cover for any Mandos wanting to avoid enemy fire, and has space for a stud-shooter gun to be mounted in itself, but it’s otherwise just an assortment of small bricks and cheese slopes.

LEGO Mandalorian Battle Pack is exemplary! It’s rare to get a wave of Star Wars sets with two great battle packs in, but LEGO have taken 2020 off to a strong start indeed.

At £12.99 / $14.99 / 14.99€, I would recommend this set. The price-per-part ratio is as high as battle packs usually are, but I think that the minifigures included and the quality of their printing justify the price tag. And of course, I’m sure it will be on sale in a couple of months, so if money’s tight, you’re likely just 9 or 10 weeks away from being able to recreate “that scene” from The Mandalorian Episode 3 for yourself.

This, my fellow LEGO fans, is definitely the way. 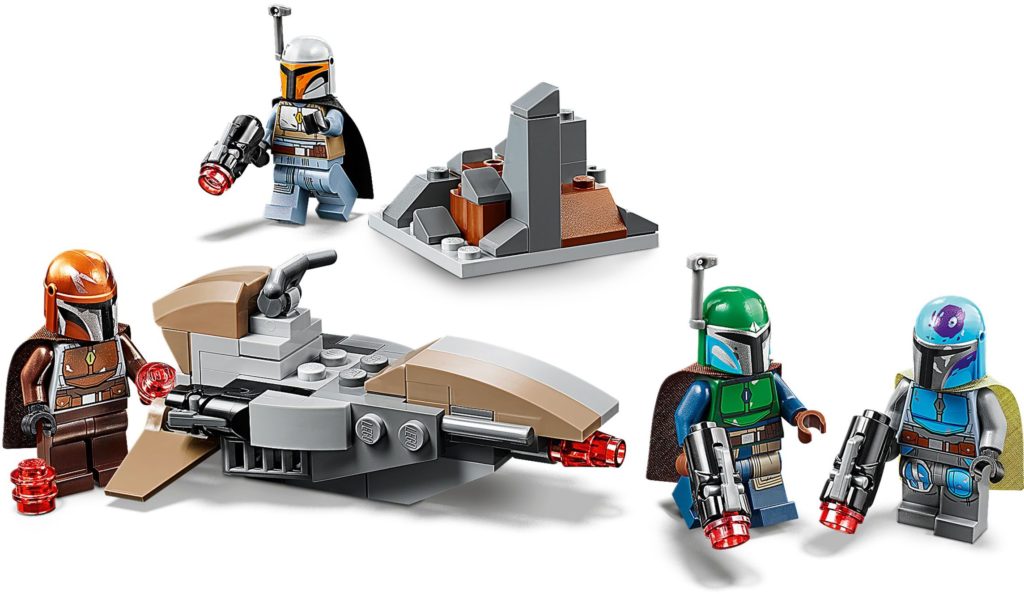 LEGO Studios: Misfires LEGO Has Made