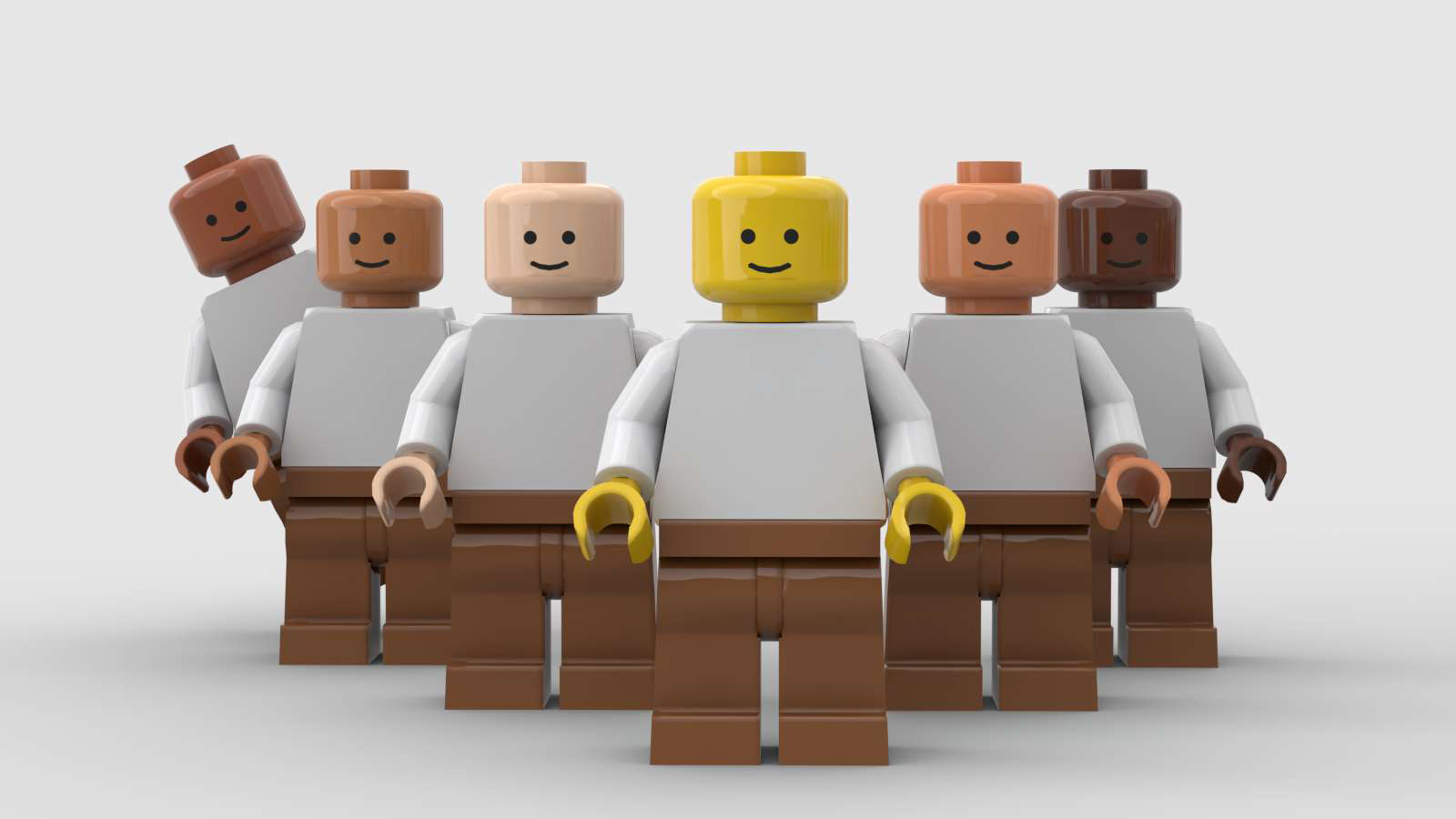 Most of the LEGO minifigures are yellow, the universal color of the minifigure. While it’s possible to discuss how universal yellow is, it’s not what we’re here to do. No, today we’ll be talking about the various skin colors of LEGO minifigures. Believe me, there are more than you can think of!

To make things a little bit easier, I’m going to divide the skin colors into two groups: Realistic colors, and non-realistic colors, a.k.a. colors that can be only found in fictional characters. I mean, lime suits Gamora well, sure, but it’s not possible for a real human being to have that skin color, right? Right. So let’s get to it.

While minifigures of all ethnicity in non-licensed themes are yellow, the licensed themes are a bit luckier that way. As you may know, LEGO started its licensed career with Star Wars in 1999, even though there were a few other licensed sets before that. When the theme first launched, the minifigures were yellow like all the other minifigures. However, the number of licensed themes only grew from then on, and after a while, the LEGO Group decided to make various skin colors for licensed theme minifigures, saying “figures in licensed products should resemble the original characters as closely as possible.”

As a result, the skin colors of licensed LEGO minifigures started to change around 2004. There weren’t a lot of licensed themes as there are today, but we had Star Wars, Harry Potter, and Spider-Man. The yellow skinned minifigures of these themes started appearing in different, more specifically flesh-toned skins. However, there are two exceptions to the big change. Before they decided to make licensed minifigures in a different skin tone, there were already several who had this. Lando Calrissian of Star Wars and the NBA minifigures. While “regular” basketball players were still yellow, minifigures of specific players, like Kobe Bryant, Chris Webber, Steve Nash etc. were of color.

Fun fact: Both Lando and some of the NBA players had the same skin color, Brown, which was changed into Reddish Brown and therefore discontinued after 2004.

Today, there are four flesh-toned skin colors: Light Nougat, Nougat, Medium Nougat and Reddish Brown. Let’s break these down to see when they came into play.

Like I mentioned above, Light Nougat came into production in 2004, and appeared in Harry Potter, Star Wars and Spider-Man sets. Since then, it has been used in every licensed theme where the person said minifigure based on is Caucasian. 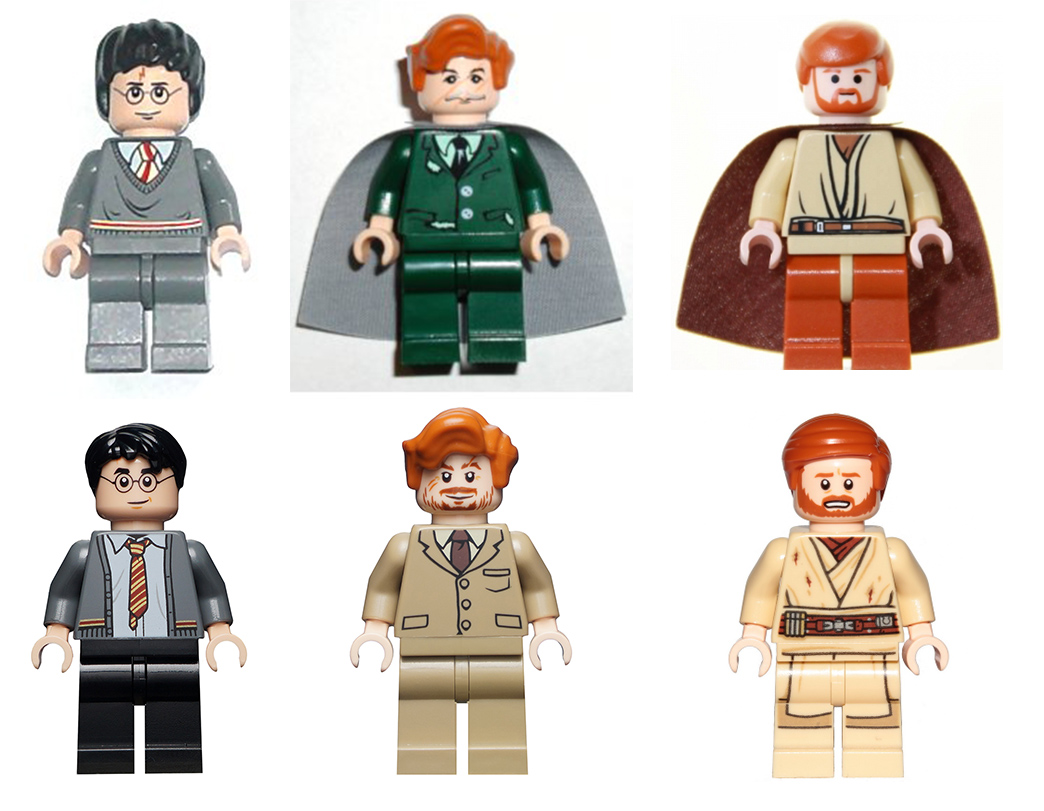 Nougat has a different story. It was already used before 2004, in the NBA minifigures. However, it was used to differentiate between black and white players. For example, Steve Nash’s minifigure was nougat, whereas Kobe Bryant’s was brown. It disappeared for a while, and reappeared again in 2009 as part of the Indiana Jones theme. It appeared as scarred Anakin Skywalker in 2010, and from there it jumped to other themes like Jurassic World (Dr. Wu), Super Heroes (Starfire), Disney (Aladdin), Overwatch (McCree) and Harry Potter (Padma Patil). 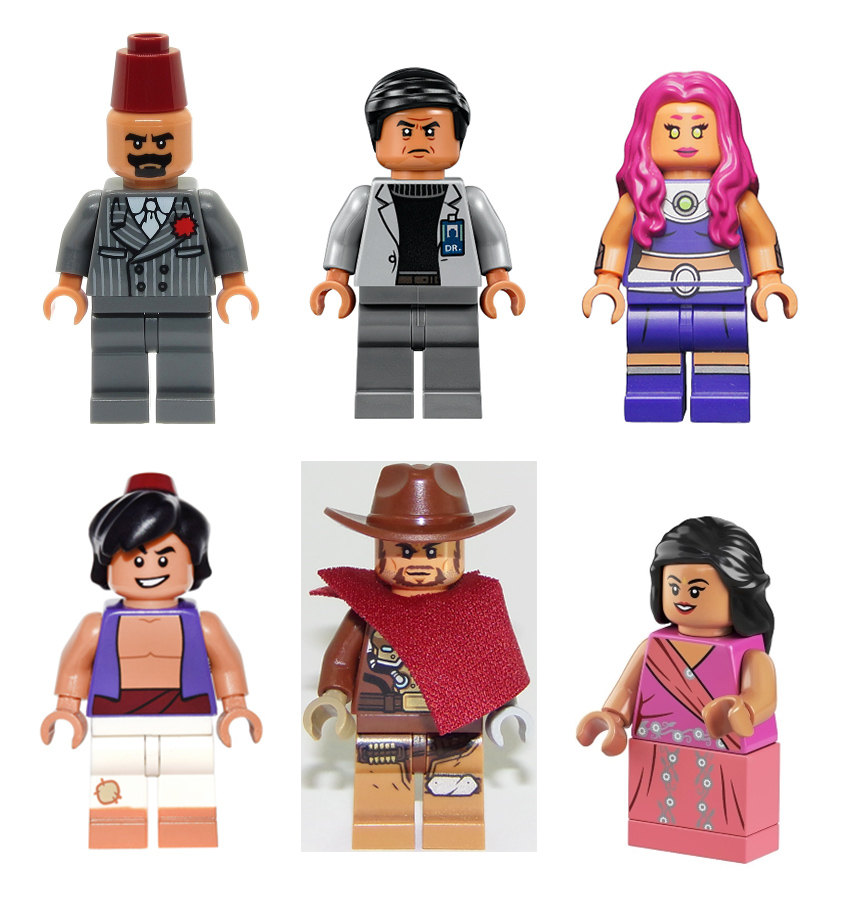 As for Medium Nougat, it didn’t appear in sets until 2011. It started its career as a zombie from the Pirates of the Caribbean, and Captain Panaka from Star Wars. After that, it moved onto other themes like the Lone Ranger (Tonto), the LEGO Movie (Vitruvius), Jurassic World (ACU Trooper), the LEGO Batman Movie (Barbara Gordon), Super Heroes (Valkyrie) and Harry Potter (Seraphina Picquery). The last time it was seen in sets was 2019. 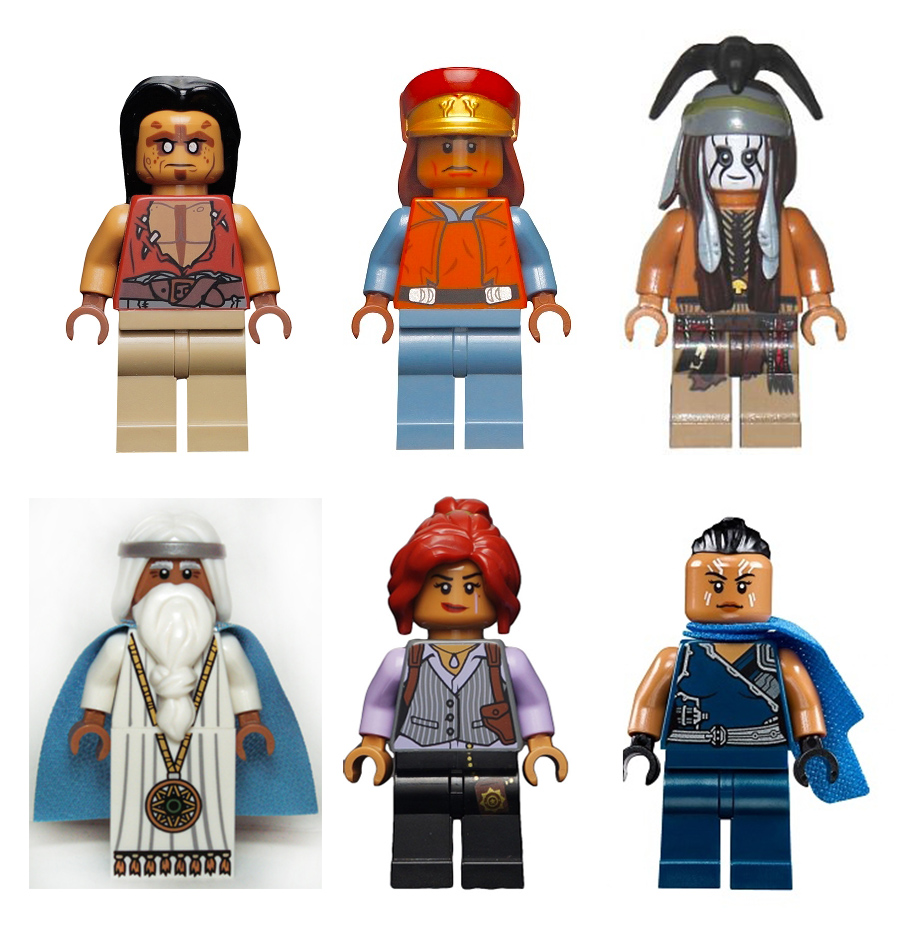 And last but not least, Reddish Brown. One of the first minifigures of this color had a classic smile. It was 2006, and the minifigure was a Bespin Guard. There was another reddish brown minifigure released that year, the design was simple again, but it was way more powerful: Mace Windu! His future expression was first used in a Prince of Persia minifigure (Seso). After that, reddish brown jumped to the Pirates of the Caribbean (cannibals and zombies), the Lord of the Rings (Uruk-hai), Teenage Mutant Ninja Turtles (Baxter Stockman), Super Heroes (Storm), Jurassic World (ACU Trooper), the LEGO Batman Movie (Black Vulcan) and Harry Potter (Kingsley Shacklebolt). 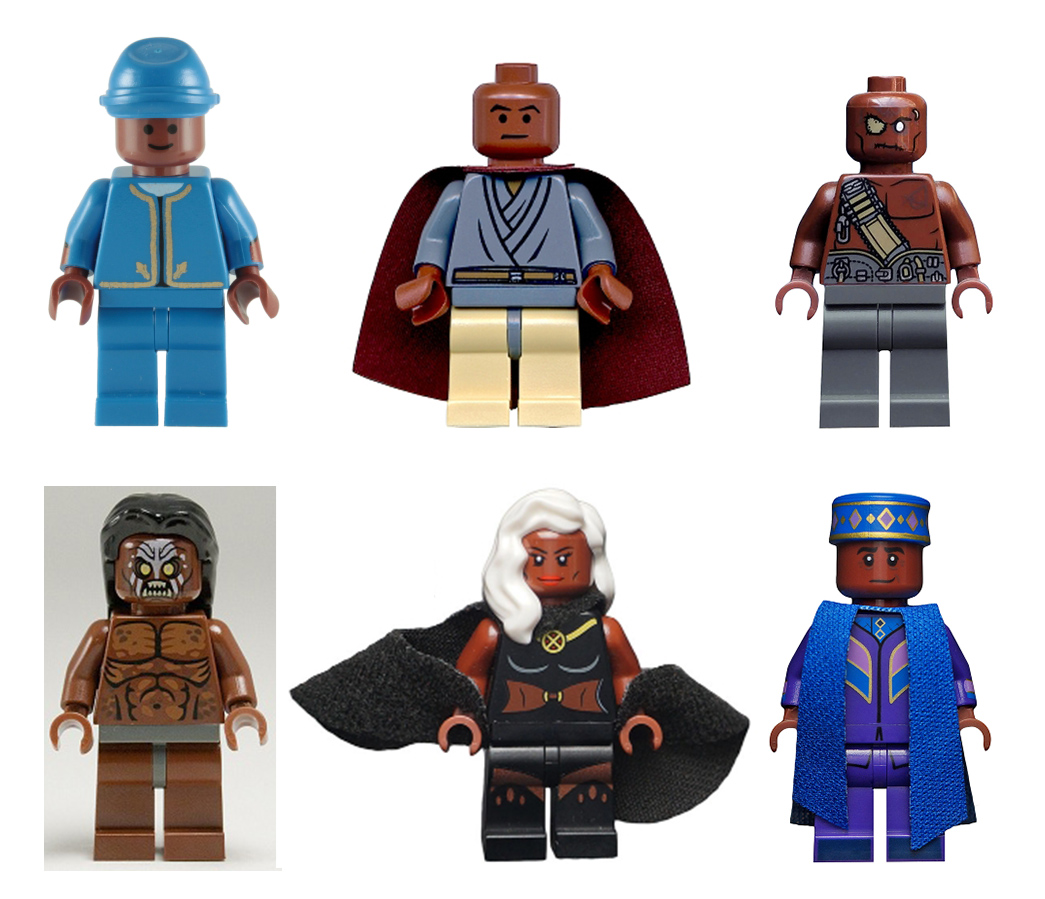 Did I say last? Well, it turns out there was another flesh-toned skin color, even though it’s not used as much as the ones above: Dark Orange. It was only used in two minifigures (of human origins, that is), Ugha Warriors from Indiana Jones (2008) and Pharah from Overwatch (2019). 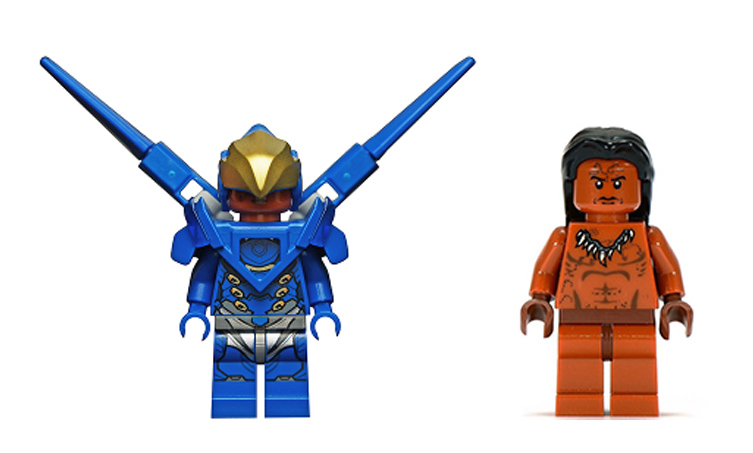 And that concludes the brief history of flesh-toned minifigures… or does it? Before we move on to fictional characters, there’s something else you need to know about these colors.

It wouldn’t be fair if I didn’t mention these two themes as well.

LEGO Friends minifigures, or minidolls as they’re officially called, have always had flesh-toned skin colors. While Light Nougat and Medium Nougat was the only variation found in them at first, after the big change in 2018, they added Nougat to the mix as well. These have been used in both Friends characters and licensed themes, like Disney or DC Super Hero Girls. 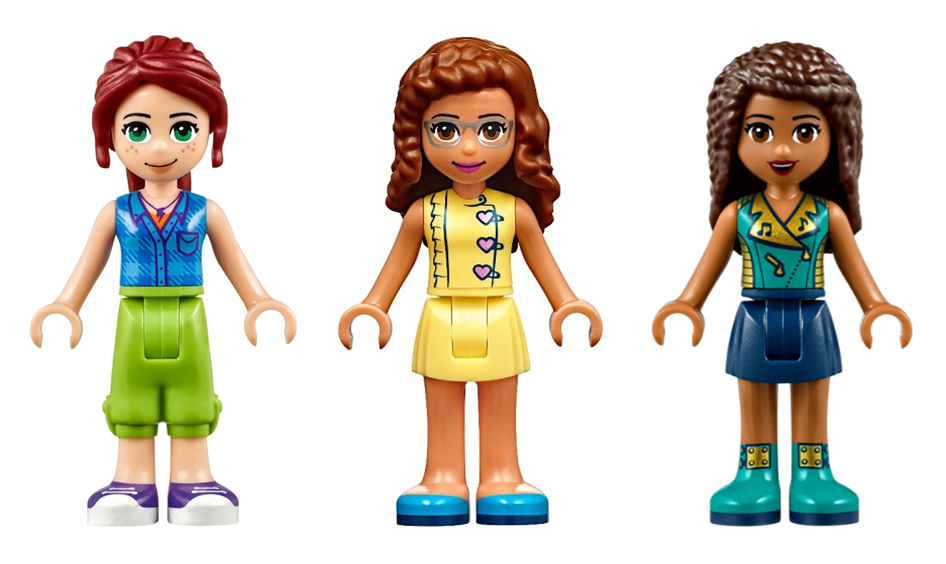 DUPLO… Well, now that’s where it gets interesting. DUPLO figures have been made in flesh-tones ever since 1983, way before any other theme, in fact. There’s even a supplemental Educational LEGO set released in 1989 called DUPLO Figures International (9159) that has an amazing diversity among figures. In 1996, they released four sets having families of different origins, Caucasian (5029), Hispanic (5091), African American (5089) and Asian (5090). It seems DUPLO figures have always been richer in color than System sets. The newer sets are no different, like World People (45011) and People (45030). 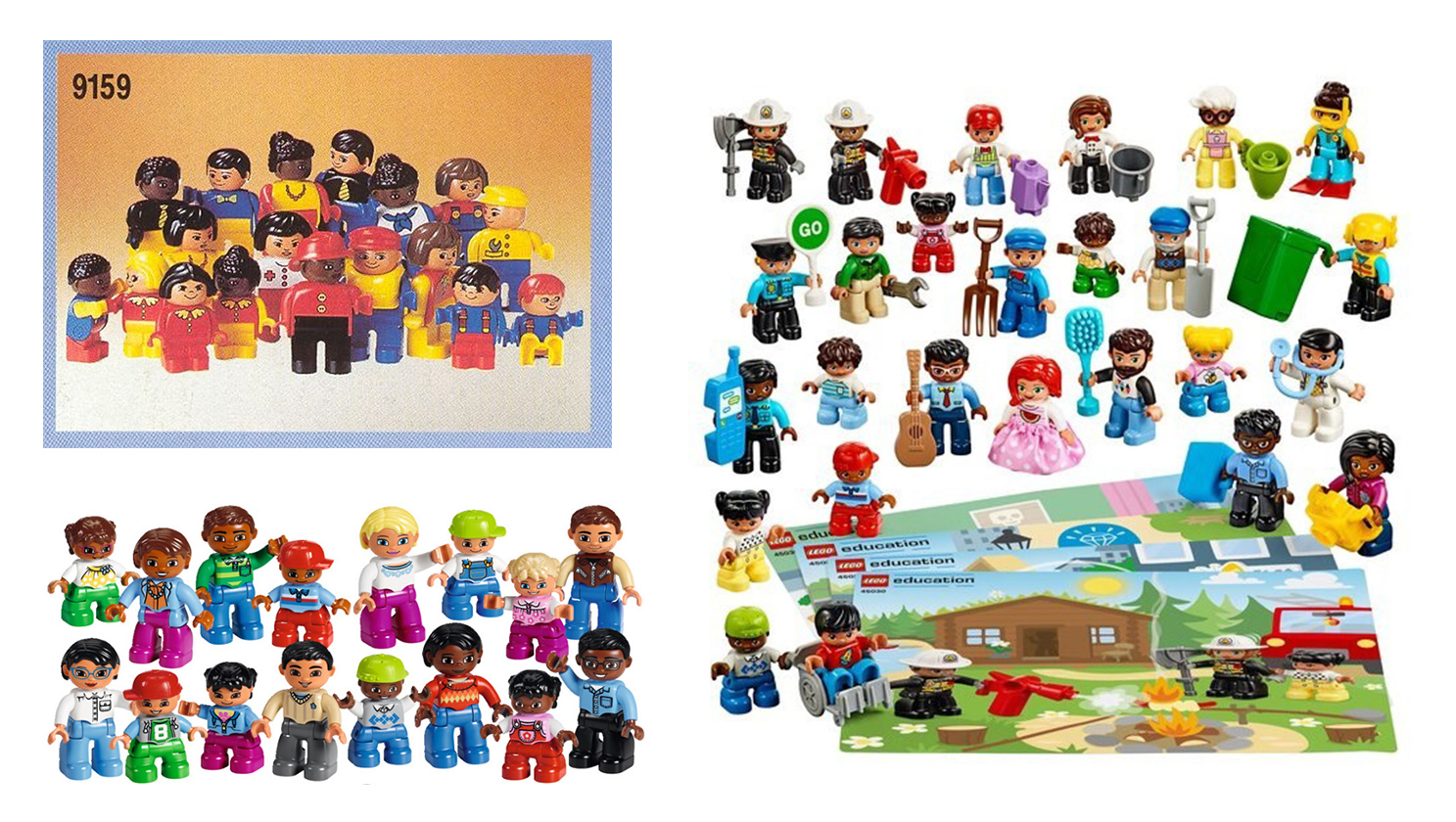 There have been many unrealistic skin colors produced over the years. They are usually used in licensed themes, either the LEGO Group’s own (like Ninjago, Hidden Side and Chima), or other IPs (like Star Wars, Marvel and DC). I thought it would be a fun challenge to take a look at their history, as in which color was released when.

It was a challenge, alright. I sifted through the 3257 heads listed in Bricklink to create the following timeline! 3257! But before we get to that, there are some things you should keep in mind.

There were way too many minifigures to go through, so if you spot a mistake, please let me know and I’ll happily change it.

The unrealistic skin colors started with the Zotaxians in 1997. Never heard of a Zotaxian? Well, they were part of a subtheme of Space called UFO. There were two unique colors in three minifigures: Trans-Neon Orange and Trans-Neon Green. 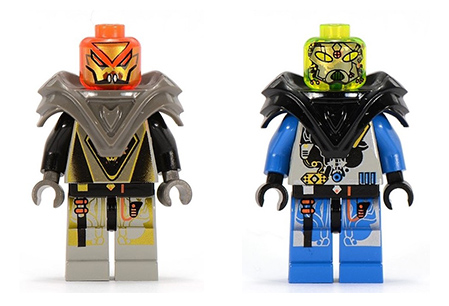 In 1998, two more joined them: Blue and Dark Gray Insectoids, another subtheme of Space. There were 3 minifigures of each color. 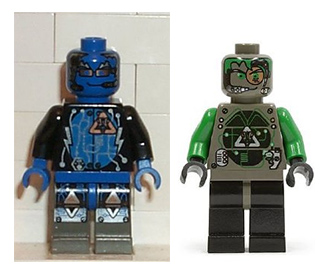 We all know the significance of 1999, right? Right! Star Wars! And with it came two more skin colors, Light Gray for Darth Vader, and White for some weird creature called Gasgano – seriously, I can’t even count it as a minifigure, but Bricklink does, so… But despite the fact the “minifigure” looks weird, it was a great representation of the character itself. I mean, sure, we’d all boo LEGO if they did it now, but for back then, I think it was a pretty good rendition of the character. 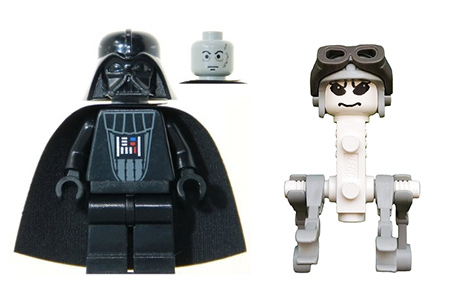 In 2001, we only got one different skin color belonging to the Harry Potter franchise. And guess what? It glowed in the dark! Yes, I’m talking about the very first Professor Snape minifigure, which lists under Glow-In-Dark Opaque. 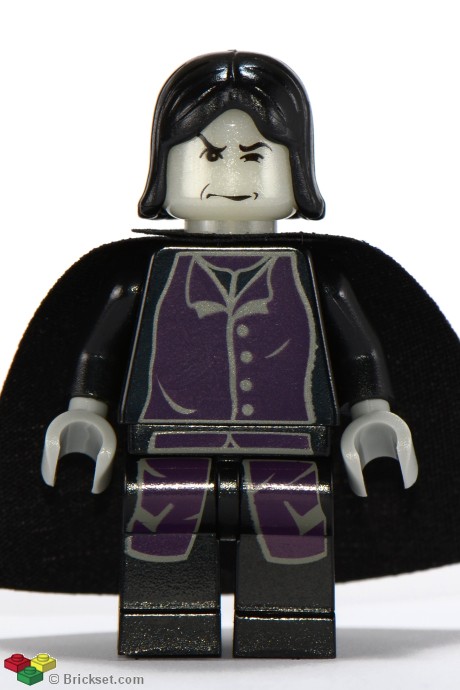 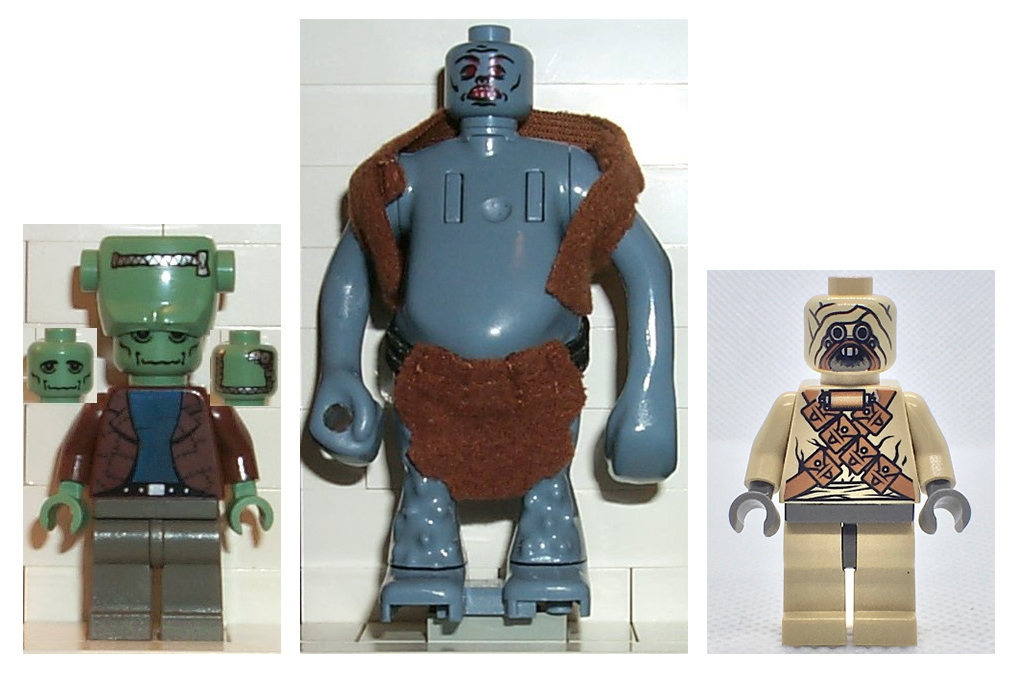 2004 was a turning point in terms of skin color, but this turning point revolved mostly around flesh-toned colors. No new unrealistic skin colors were released in 2003 or 2004.

With the color palette changing in 2004, minifigures released in 2005 had no longer Light Gray skins, they were now Light Bluish Gray. We had three minifigures under this color, Darth Vader, Emperor Palpatine, and Merman from Harry Potter. According to Wookieepedia, the skin color of Jawas is Black, so I guess that counts as well. We also had another glow-in-the-dark minifigure, Lord Voldemort, and there were two variations of him, Glow-In-Dark Trans and Glow-In-Dark Opaque.

2006 brought a new Green skin color with Killer Croc, and 2008 brought Orange with Ahsoka (which is mostly used in all her minifigures, except the one released in 2016 which is Dark Orange). 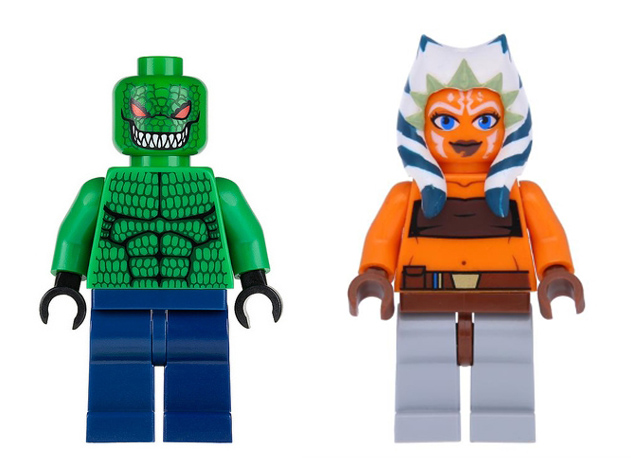 In 2009, Dark Bluish Gray joined with Hondo Ohnaka and Turk Falso from the Star Wars universe. There were three brand new skin colors in 2010, Aayla Secura with Medium Blue, Witch (from CMF 2) with Bright Green, and Atlantis Squid Warrior with Dark Red, even though his face can’t be seen under his headpiece. As for 2011, only Shaak Ti with her Red skin color was new.

2012 was a good year for unrealistic skin colors, with five new colors joining the family. We have Genie (CMF 6) with Medium Azure; Oola, Lasha and Swamp Creature with Lime; Orcs and Goblins from the Lord of the Rings with Dark Tan; Rattla from Ninjago with Dark Blue; and 8 minifigures ranging from Star Wars to Monster Fighters with Olive Green.

With Legends of Chima released in 2013, we had three brand new additions. Bright Light Blue representing the Eagle Clan, and Dark Green and Dark Brown representing the Crocodile Clan. There was also a Lavender-skinned minifigure (Umbaran Soldier) and a Dark Orange-skinned one (Nikto Guard) from Star Wars universe.

In 2014, Ultra Agents brought Trans-Bright Green with Retox and Adam Acid. In 2015, Dark Pink and Magenta joined with Sinestro and Vision. We also got our first “invisible” minifigure that year, with the Trans-Clear skin color of Invizable from Ultra Agents. The year also saw Light Aqua and Yellowish Green appear as skin colors, in the CMF Series (Banshee) and Ninjago (Lloyd Possessed). From the Legends of Chima theme, we got a Medium Lavender skin color representing Vardy from the Vulture Clan.

2016 brought a new color for ghosts, with Mayhem from Ghostbusters in Trans-Black. In 2017, Dark Azure joined the skin color family with Admiral Thrawn, Aayla Secura, Nebula and Yondu. Guardians of the Galaxy also brought Pearl Gold with Ayesha. We had our first Trans-Light Blue skin, with Jestro (Electrified) from Nexo Knights.

Only one new skin color was introduced in 2018, Bright Light Orange, and it came with Cheetah from the DC Universe. Same goes for 2019, the color of the year was Trans-Purple with Overlord (Legacy) from Ninjago. Finally, Hidden Side brought two new ghost skin colors in 2020: Trans-Yellow (Scrimper) and Trans-Red (Axel Chops). 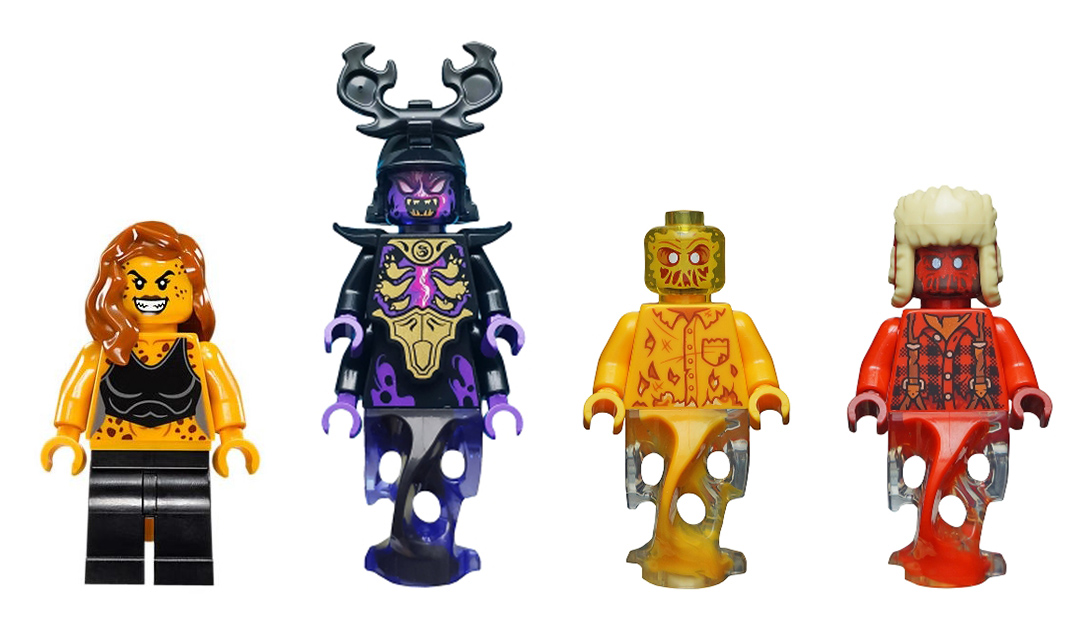 As you can see, there have been quite a handful of LEGO skin colors throughout the years. Some characters are more popular than others, so it’s easier to find custom expressions for them, like zombies in general, or characters from Star Wars like Ahsoka and Shaak Ti. Similarly, while there isn’t too many people of color with different expressions in the official LEGO minifigure world, custom companies fill that void beautifully.

So, what do you think about the various skin colors LEGO has produced? Is there anything you’d add to the palette? Let us know in the comments!

Images from Brickset and Bricklink. The images of minifigures with classic smiles are renders from Bricklink Studio.