A few days ago, the next Creator Expert LEGO Modular building was finally announced. They release one every year, and being a fan of the series, I’d been waiting with anticipation for it.

The last one was the Corner Garage, and although it looked good from the outside, the interior details were very disappointing. All floors felt pretty bare with the possible exception of the vet’s office, but I had a personal issue with the dead fish in the aquarium. 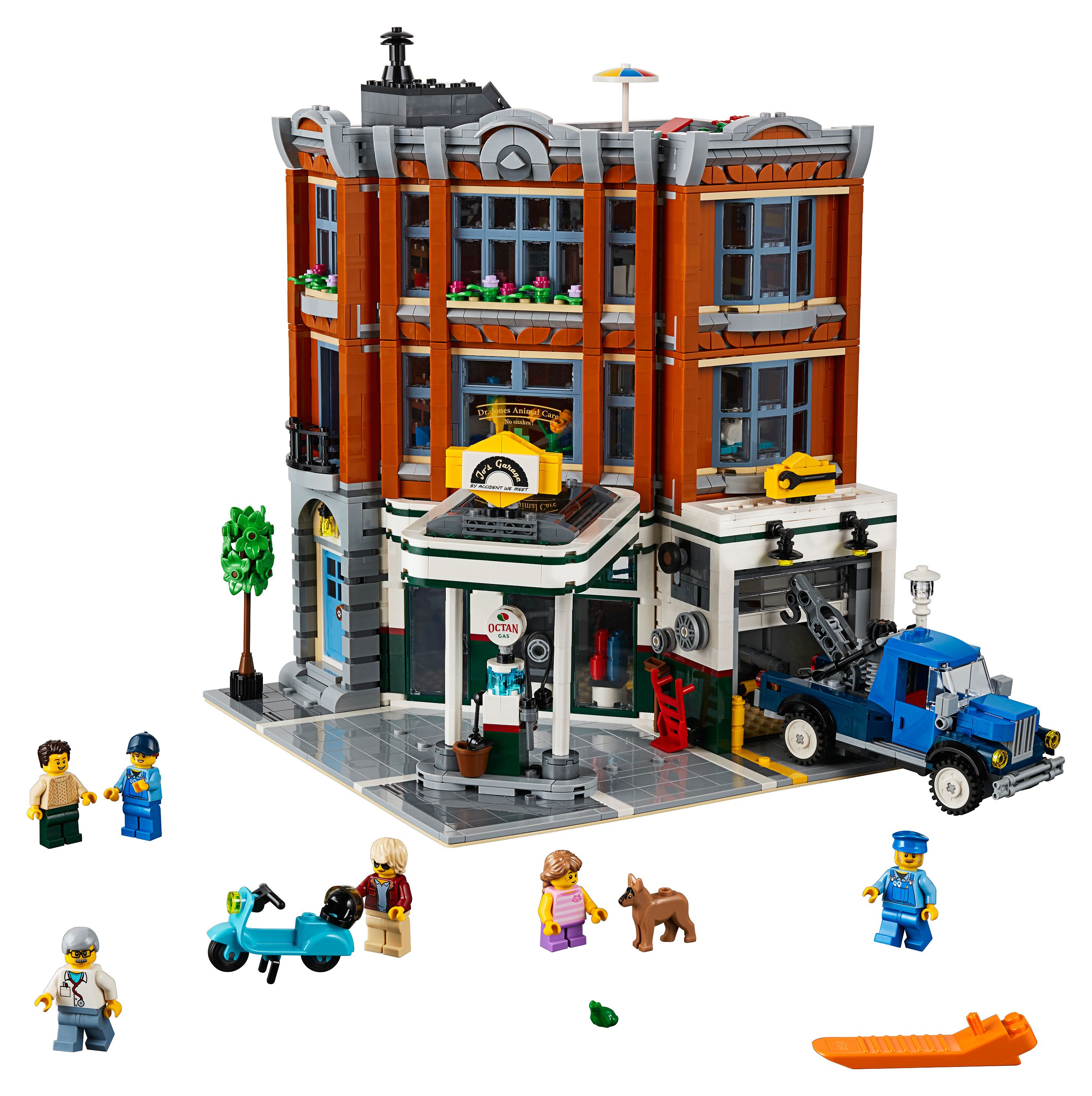 Prior to that was the Downtown Diner, a brightly coloured building with a very distinct 1950s flavour. This model caused a stir not only because the architecture was a stark departure from what came before it (I personally loved it), but also because it replaced the vintage plain smiley faces for those with more modern aesthetics. 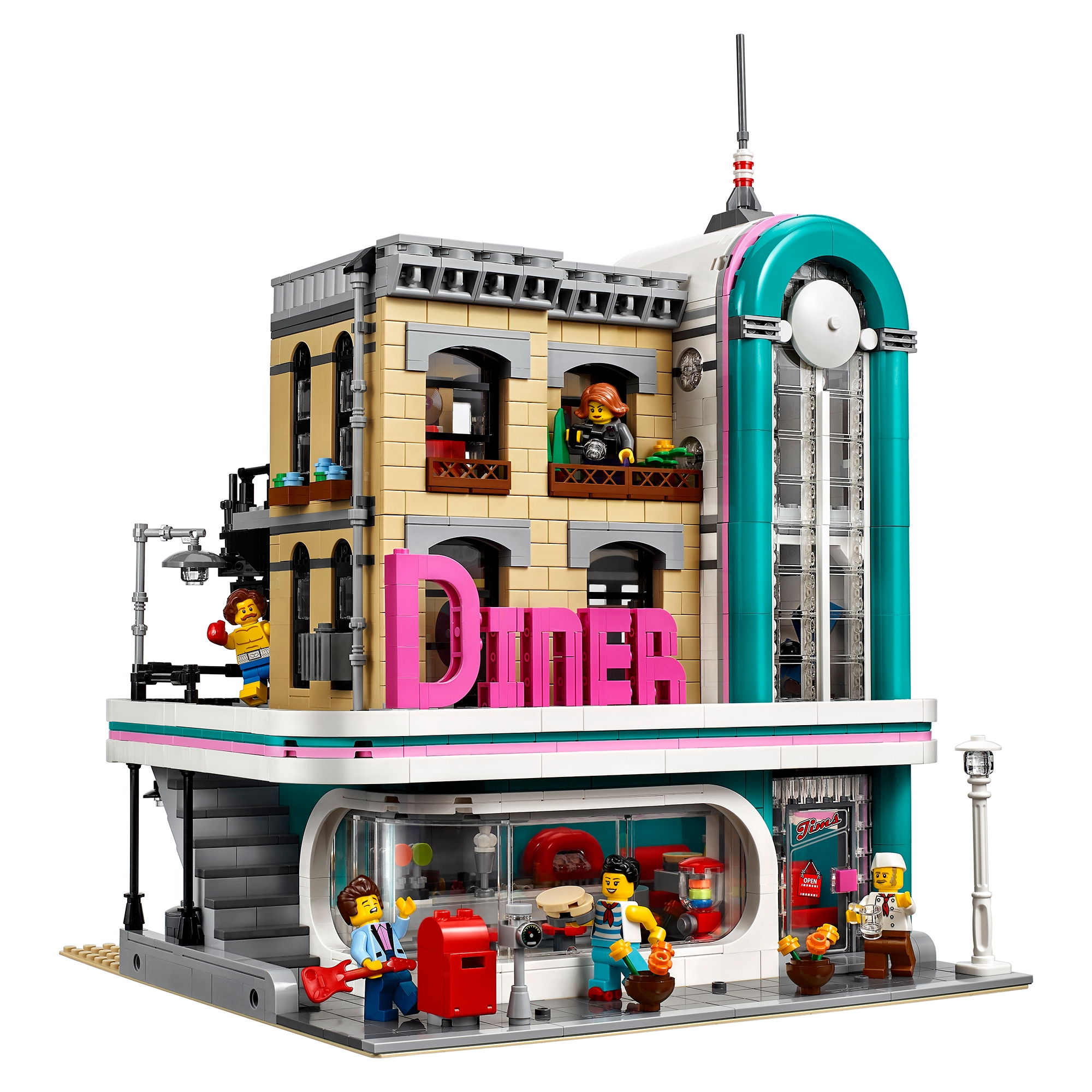 As far as I’m concerned there have been more hits than misses. I’ve been following the series since the Parisian Restaurant and the only one that was a disappointment was the Corner Garage.

In the back of my mind of was kinda hoping this new LEGO modular set would also be a dud, mostly to ease the burden on my wallet.

So the latest photos were released and… well… damn. 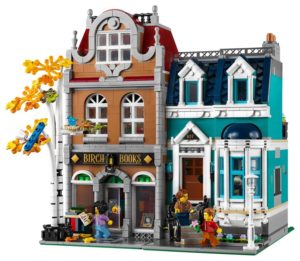 According to the press release, the Bookshop‘s buildings were inspired by traditional Dutch architecture, yet I can’t help but see a somewhat British Victorian feel to them as well, especially the teal-coloured house. You almost expect a foppish haired gentleman to declare his love for someone in this set… 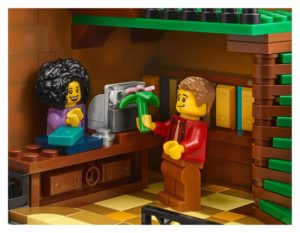 or Marry Poppins to come down the fireplace with her umbrella… 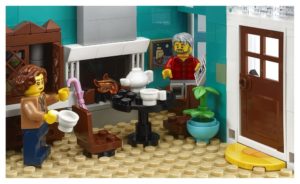 Like the other LEGO modular sets, this set is designed to be on a 32×32 baseplate. Only this time, in a manner similar to the Pet Shop released 9 years ago: The two buildings can be split if you want to. This means the bookstore could be placed on the right instead of the left for instance, or you can place one building in a different part of the street, to add a little more variety to your city.

Just like the Pet Shop, there’s only one shop, and the rest is a home. We don’t get enough residential accommodation in these sets so it’s good to focus on this once in a while. 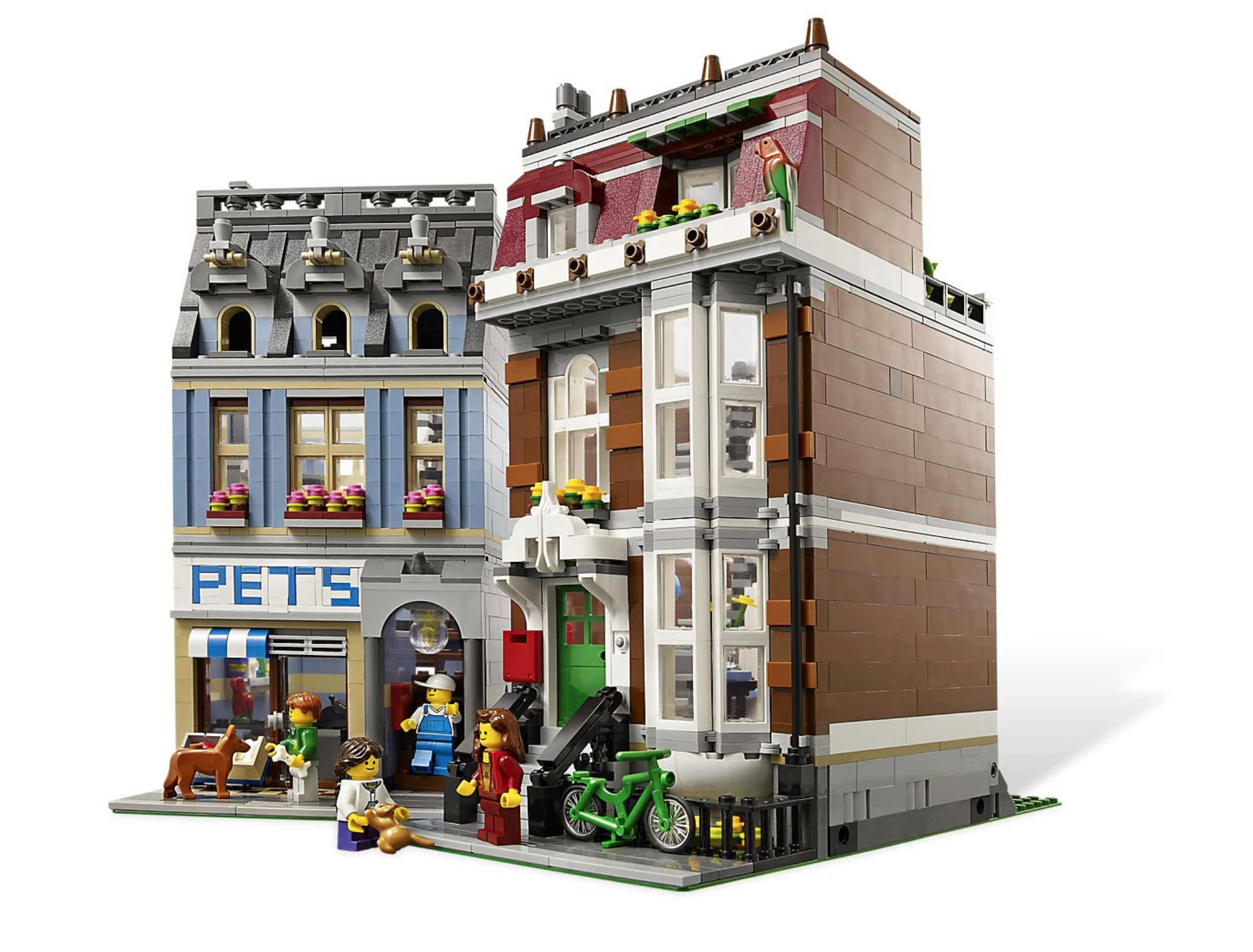 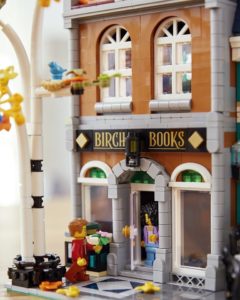 The shop is a bookstore, and as a large birch tree is growing outside of it, it’s called “Birch Books”.

I love how the tree looks and how it was built. The tree’s colours feel very autumnal and it’s really nice to see so many different colours for the leaves.

A blue bird has made a nest in that tree, and I love the piece used to make the nest. It’s been used once before in that capacity in the Fantastic Beasts Newt’s Case of Magical Creatures set.

I also love the fact there’s a toy plane stuck in the tree.

It’s hard to see clearly inside but aside from the frontage and the till there doesn’t seem to be much room for books in the bookstore. There clearly aren’t that many shelves. It might be the smallest bookstore in the world. Maybe the shopkeeper doesn’t need to earn a living.

She lives upstairs with her pet chameleon. It’s a piece we got just recently with the Explorer from LEGO’s 19th collectible minifigure series, except he’s blue now and not green. He matches the bed sheets.🙂 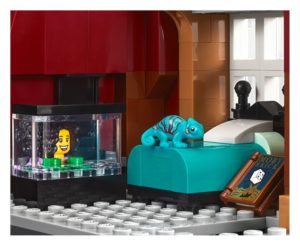 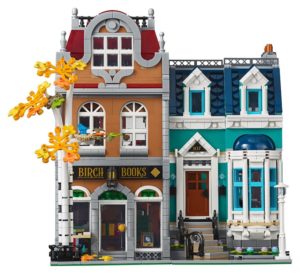 The home next door is a traditional Victorian house with a bay window on the ground floor, and a bedroom on the first floor.

Its street number is a nod to the official LEGO designation for the colour it’s primarily made of, teal.

What’s new here is the addition of a cellar, and at the back they’re growing pumpkins. There seems to be a hatch to get a large ladder in and out of the cellar.

The insides look nicely detailed which is a great return to form for the series after the lacklustre Corner Garage.

Details Inside and Out

There’s actually so much detail in that house, from the window seat, a fireplace, a table with plates and a pot of tea, a coat rack with an umbrella and hat, even the bed upstairs is nicely fashioned. The designers have really gone all in with the detailing.

But it’s not only on the inside that they’ve focused their attention. Take a look at the tiled roof, made up of a series of quarter circle tiles.

The whole front of both buildings is filled with such precision. 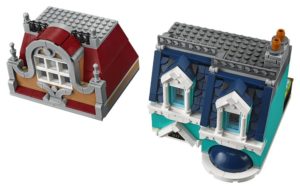 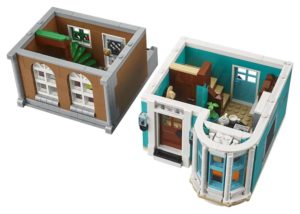 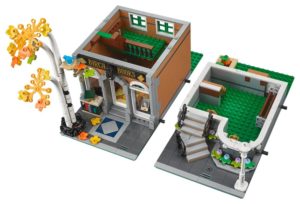 If I were to complain though, I’d say the back is a little too bland in comparison.

I do like that the top floor opens in a different way, with half the roof coming off for play access, which reminds me of the Parisian Restaurant’s artist’s loft. 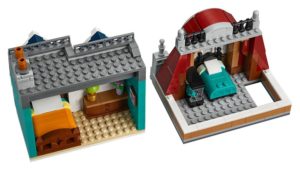 Usually, the building’s first floor is fully tiled, but here only the bookstore has that – it’s a nice looking floor, mind, but I would’ve liked the house’s ground floor to be tiled too.

Yes, I know it’s elevated since it’s above the cellar, but it’s technically still the building’s ground floor.

Now, despite the fact that the LEGO Group has managed to cram 2,504 pieces into this set, it does feel kinda small when compared to other LEGO modular sets from previous years.

The bookstore sits in between these as far as the piece count is concerned, yet half of it only has two floors (the cellar doesn’t appear to elevate the building that much and is mostly empty inside).

The official photos don’t show the building next to the others. Instead there’s a gap between it and the previous ones, which makes it hard to gage its size properly. I guess this is something we’ll have to see for ourselves should we choose to buy this set.

The unresolved query about its size aside, this building does look good. Like, really good. 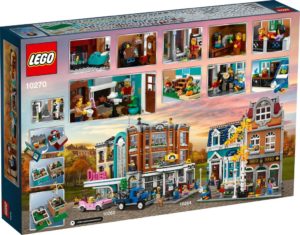 The five included minifigures are very nice but nothing worth writing home about to be fair. I do like the man’s red shirt with braces, and it’s nice to see the scarf piece in a new lime green colour.

Will I be getting it? I’m seriously considering it. It’s always a problem though with this series always arriving right after our wallets have been drained after the holiday madness. Maybe I’ll wait for a special offer to come up, but I think we can be confident that I’ll be getting it at some point during 2020.