Mid-May LEGO released a new theme to the market: the Monkie Kid. There are eight sets in this release and this article will look at set 80007 Iron Bull Tank which is one of the smaller sets in the release.

What’s the Monkie Kid about? 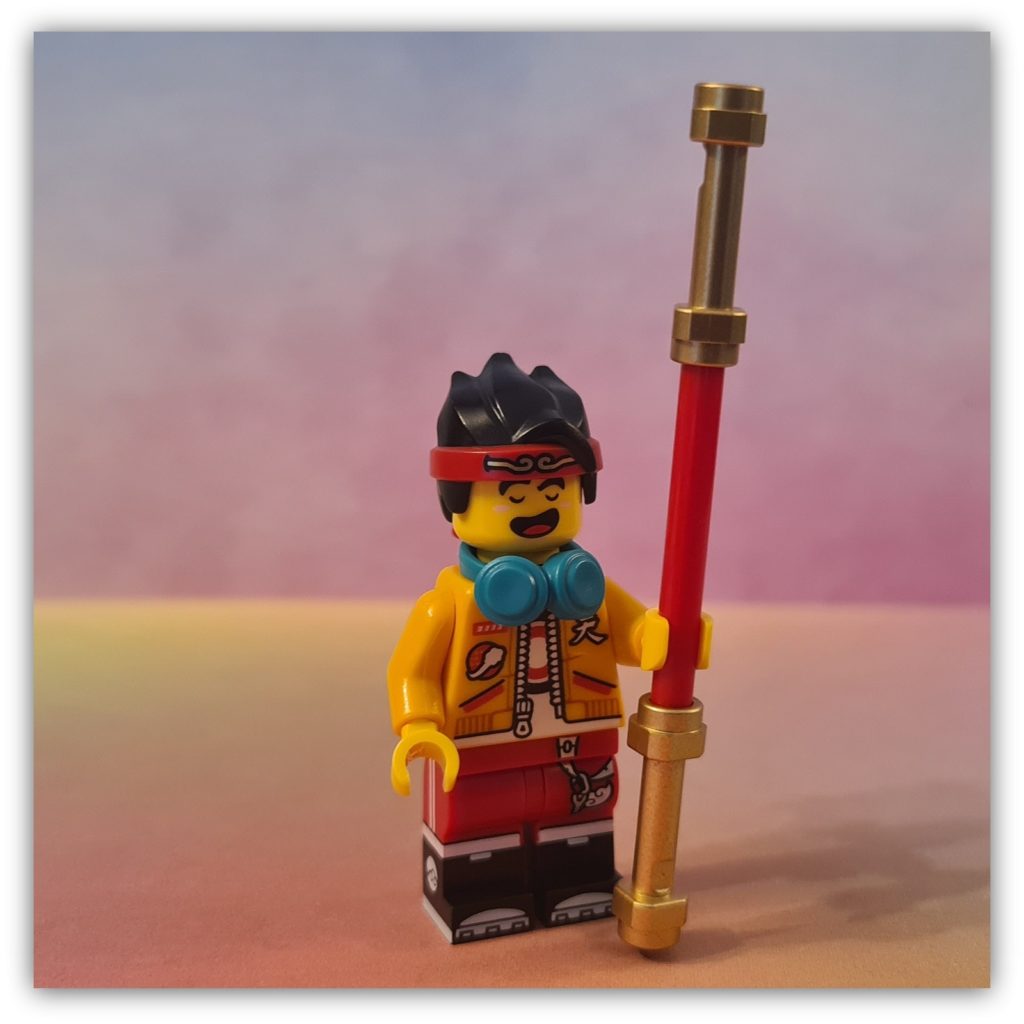 Well, it’s a retelling of an old Chinese tale where an ordinary child finds a magical staff once belonging to the Monkey King. Having found this staff, he becomes the chosen one to stop the Demon Bull King.  Whilst there are plans for a TV series, these haven’t been released yet. Until then there is a trailer that is available. However, at 1 minute 30 seconds in length, I’m still not really sure who the characters are and what their stories are.

That said, as the story (“Journey to the West”) is 500 years old and from a quick search on Google I suspect that Chinese children will be very familiar with the story and what the characters represent (I’ve found that pretty much any story that is more than 200 years old is often a life lesson in some way; there wasn’t the appetite for pulp  fiction back then). Certainly, there were many characters that referred to various elements, deities etc. of Buddhist and Taoist lore.

What I found interesting was that LEGO had spent two years working with Chinese children and families to make sure that the Monkie Kid theme was sympathetic and authentic to Chinese traditions and beliefs.

So, what are the LEGO Monkie Kid sets?

As I mentioned before, there are eight sets in the release. They are:

The top three sets are all upwards of $100USD; the White horse is over $30USD, so I would suggest that none of these are what I would call “pocket money” prices. Much as LEGO is all about playability, I would have liked to have seen at least one theme building in this collection; especially given the number of vehicles!

Because of the costs of the sets, my choice of which set to get was quickly whittled to either Pigsy’s Food Truck or the Iron Bull Tank.  I decided on the Iron Bull Tank for one simple accessory: the Monkie Kid’s headphones! 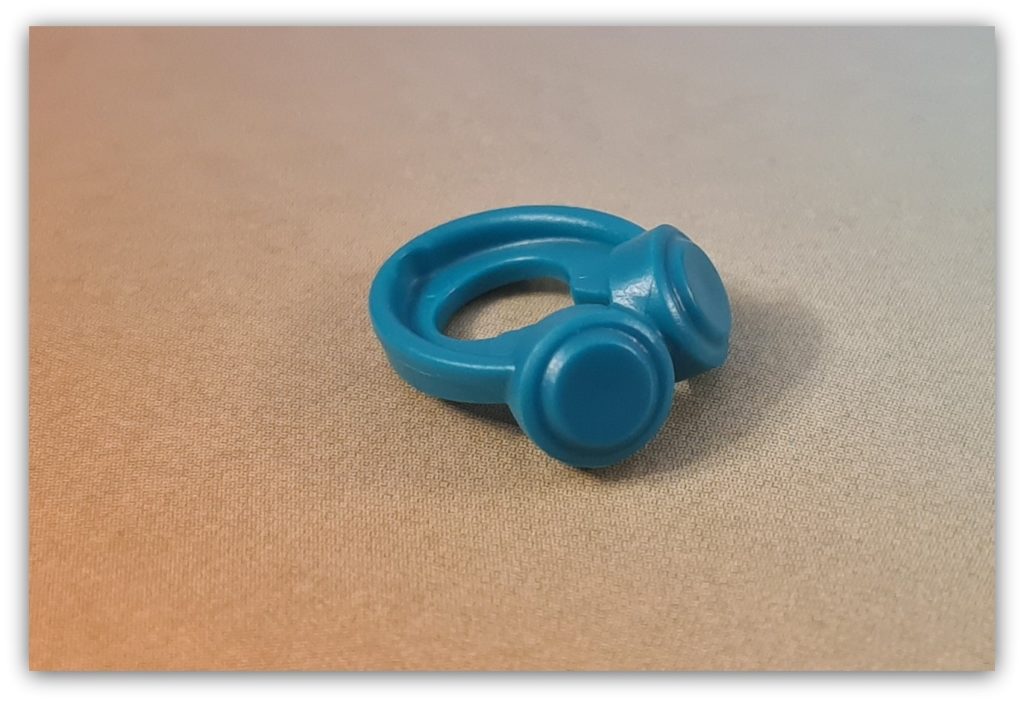 The set comes in four bags, and each bag took me approximately 20 minutes to complete. The instruction booklet is up to LEGO’s usual standards, although I did like the additional progress chart running along the bottom of the pages. The Kid walks further across the page until you get to the end.  Also, the Kid appears when you have to add stickers.

Oh, yes, there are stickers. 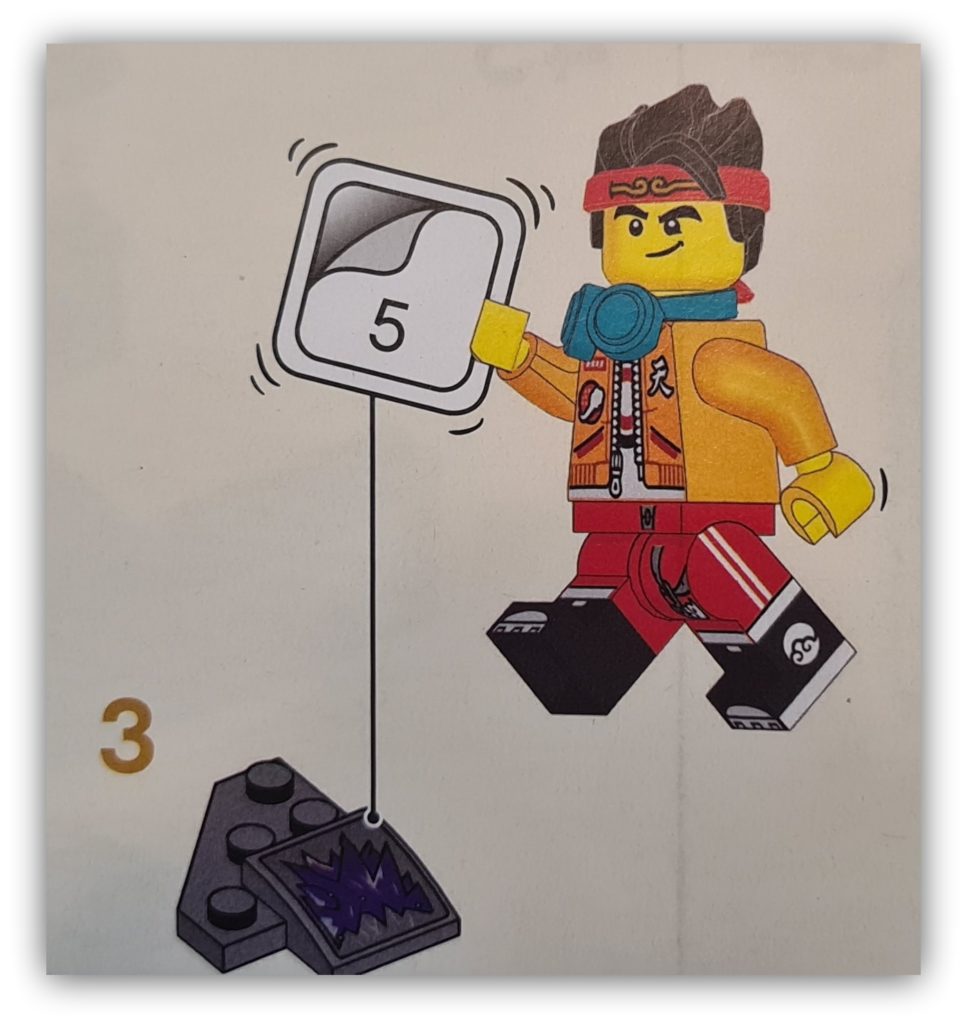 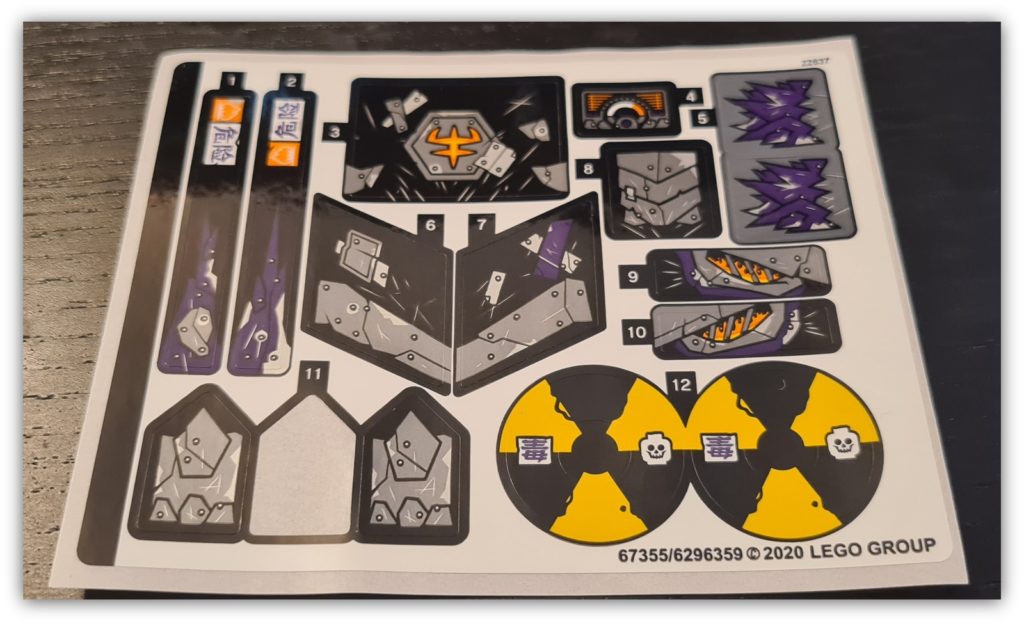 I had already applied one when I decided to photograph the sheet!  Whilst applying stickers is always the thing I dislike in any LEGO build (all it takes is one unexpected sneeze/phone call/cat and that sticker’s misplaced forever) stickers “9” and “10” have to be applied the right way round (and I’ll explain why later).

There are four figures in the box; first, there is the Monkie Kid. 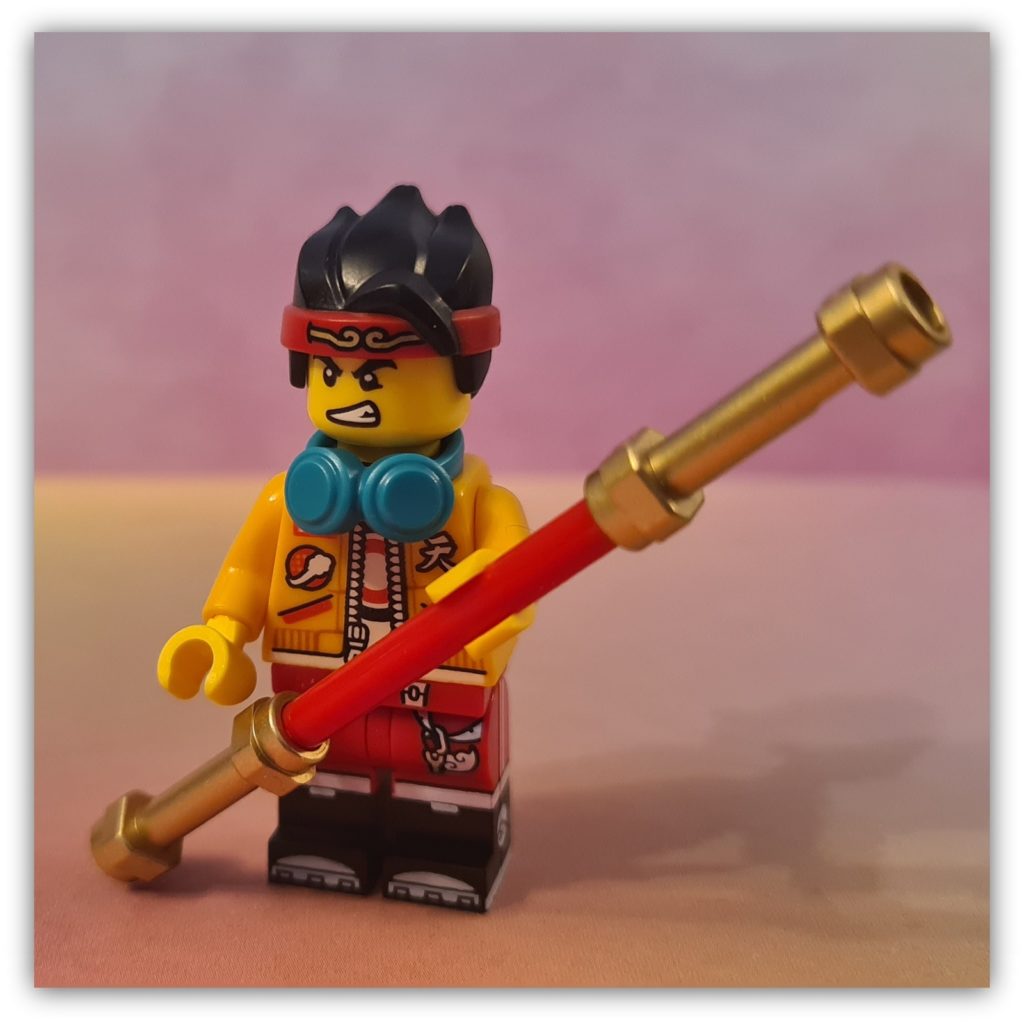 He has a double-sided head. I love the headband and hair piece and the jacket printing is brilliant with the monkey image on the back.  His legs are printed with what look like sneakers and overall, it’s a really cool look.  I’m sure someone will tell me if the ends of the staff are new, but they do look like something that would work in a home gym. 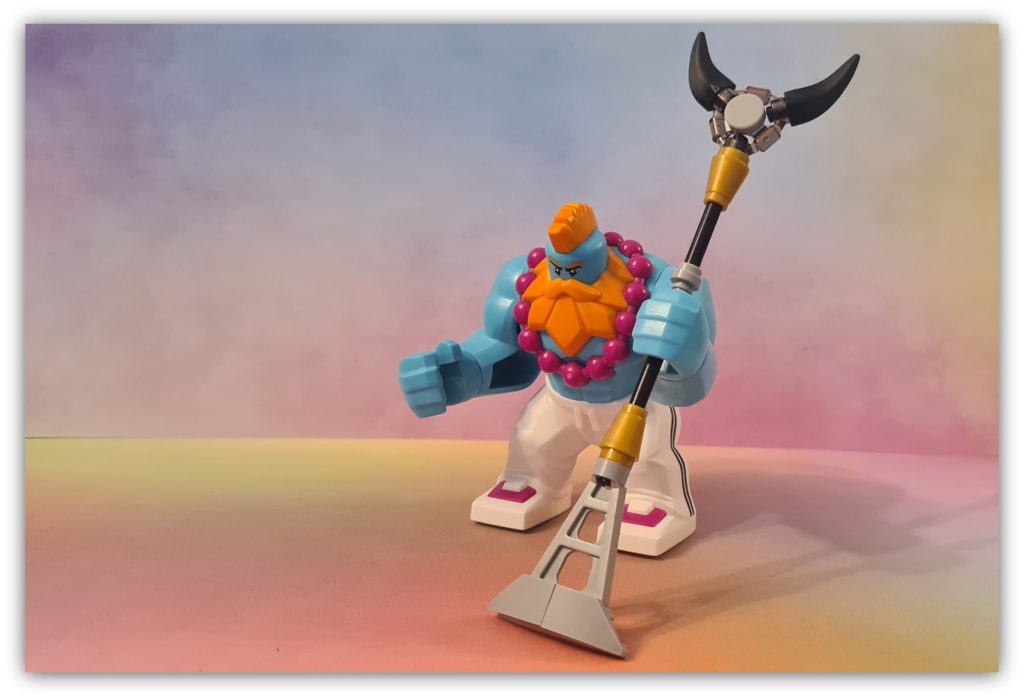 Sandy is a big fig and is pretty much one single block with just moveable arms. This is a shame as I think it would have been cooler to be able to move his head (Roadrage from the Overwatch series has a standard LEGO figure head allowing for a lot more adaptability).  I’m going to assume that Sandy’s weapon is probably more of an axe than a shuffleboard rake, but it’s hard to tell.  It’s also hard to photograph because it’s so tall! 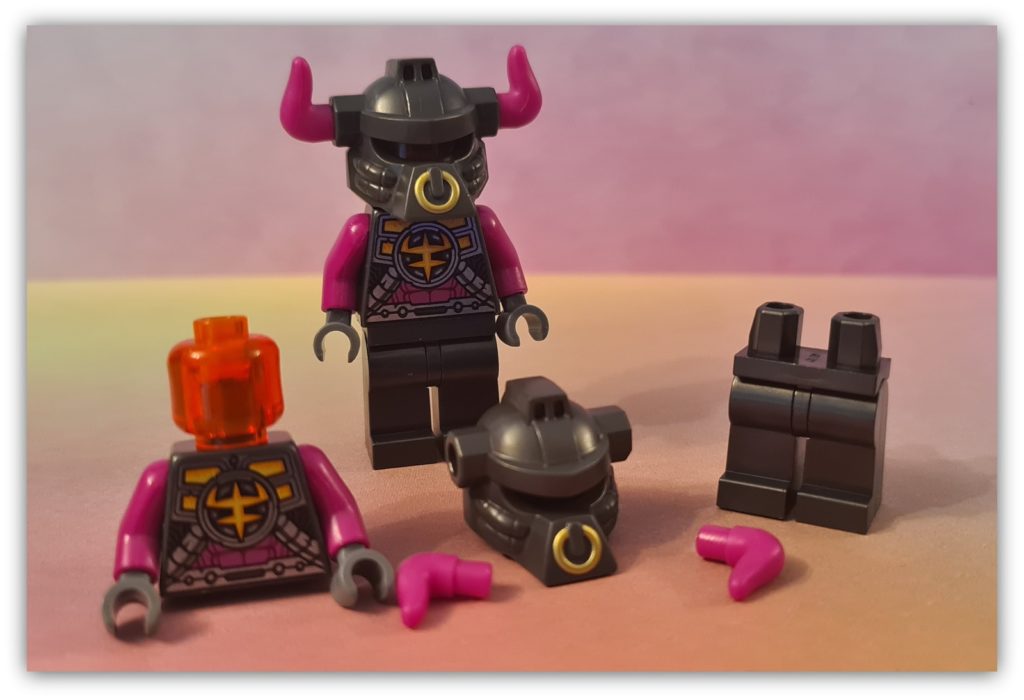 There are two bull guards in the set and for me it’s the helmets that make them cool. The gold bull ring printing is precise, which makes up for the fact that the legs aren’t printed at all. The colours are interesting, though, on the printing that is there.  Also, it’s fortunate that there are two guards as the tank really requires two to operate it properly! 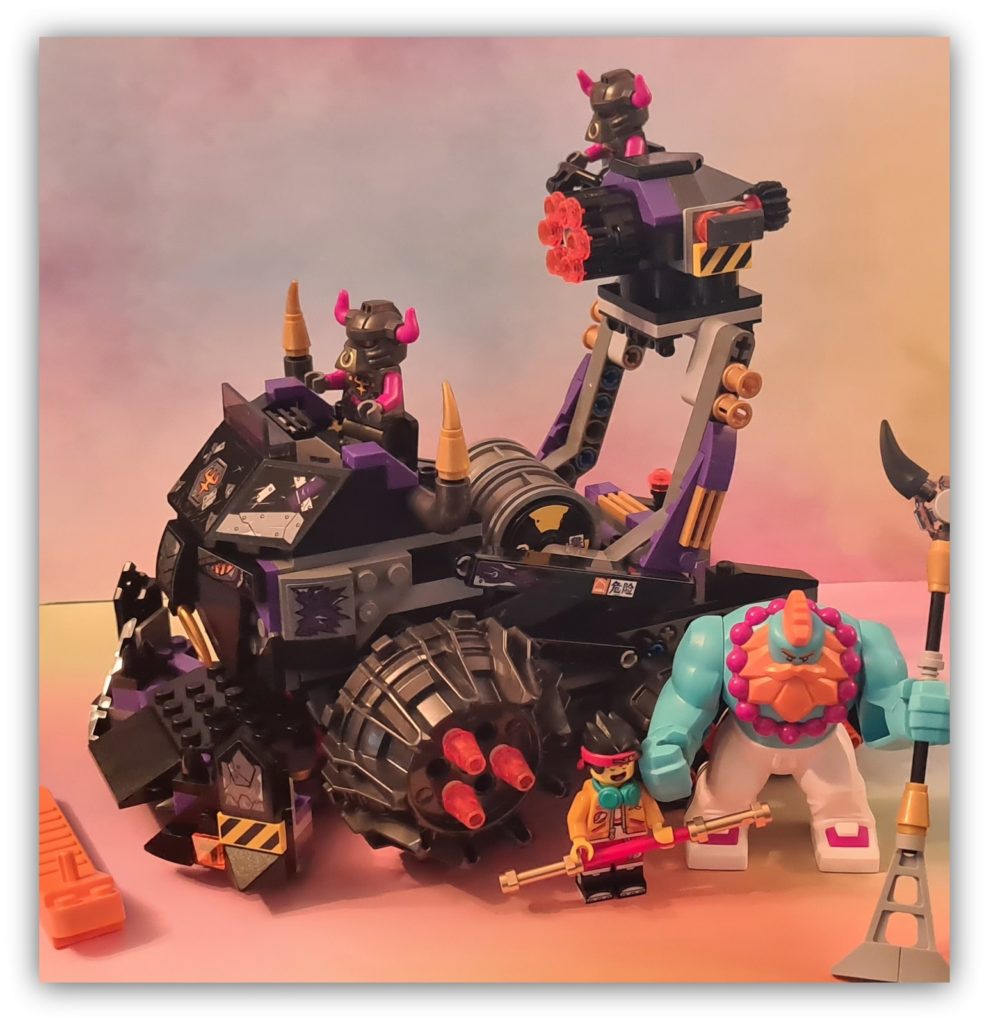 The tank is constructed in four parts; the rear mounted gun turret, The barrel platform, the drivers compartments then finally the mobility parts.  The build itself isn’t bad, the majority of the stickers being applied in bag three. 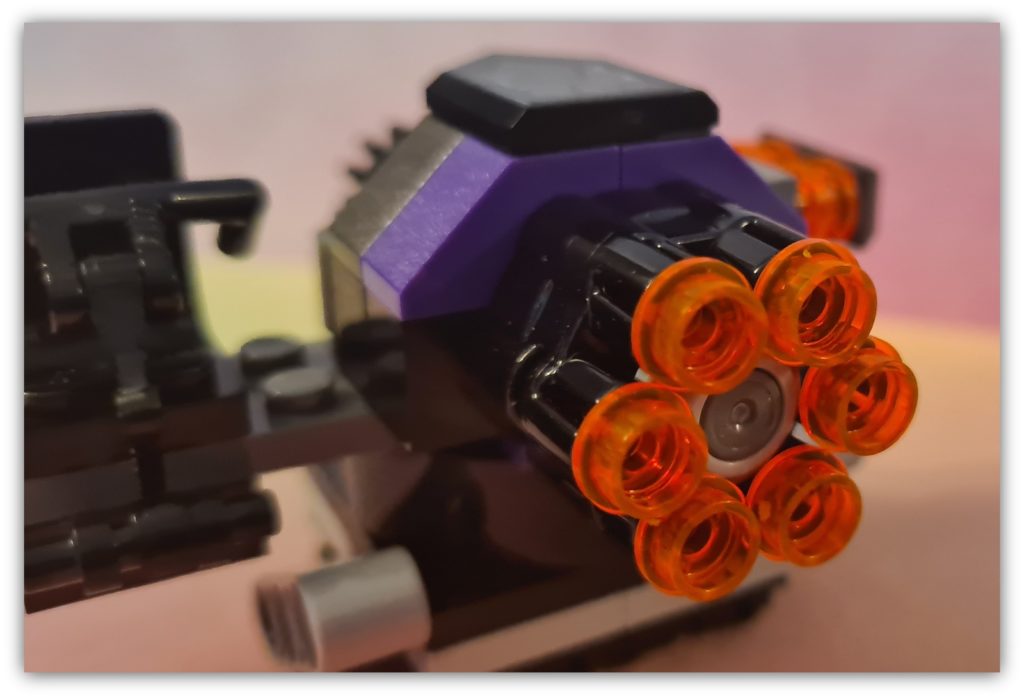 The Gatling gun is a brilliant bit of LEGO construction.  The round studs clip in place, then with a twist of the wheel at the back the studs spring forward.  I haven’t undertaken any proper science experiments here, but I would suggest that it’s probably as powerful as the hand blasters, but not quite a powerful as the spring launched spears. Fortunately, LEGO have provided several spare studs as I suspect that many will end up somewhere under the sofa (or under foot) if a builder isn’t watching where they are firing. 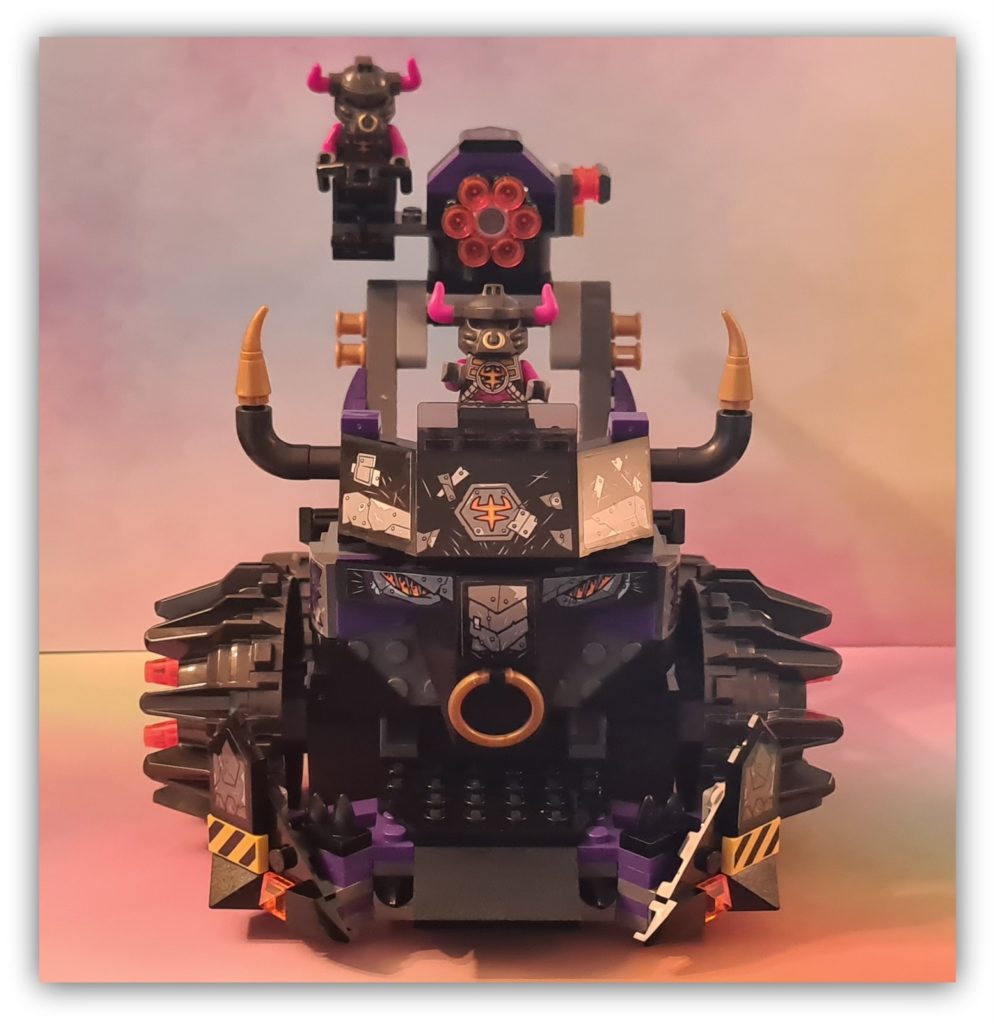 The driver’s compartment is where all the stickers go.  Because of the Studs Not on Top style of building and because of the less than quality image on the instruction page, this is also possibly one of the most challenging elements of the build. Stickers “9” and “10” form the eyes of the tank, so getting these the right way round and on the right parts will either mean your Iron Bull Tank looks mean and moody (like mine fortunately did) or surprised and possibly a little scared. Whilst this would be great for comedic value does rather ruin the effect.  I do like the gold ring and the horns on the tank; they mimic the overall Bull nature of the theme.

The wheels on the tank were also a pleasant surprise. I’m not sure why they would have trans studs (apart from adding some additional interest to parts, but they do.  What I did find when I applied the “whoosh” test by driving it across the build table that the shape of the wheels made it rumble, and having been close to a tank as it went past I thought it was a really brilliant thing. Oh, and just in case you have never applied a “whoosh” test; it’s when you pick up your model plane/rocket/spaceship and whoosh it around the room pretending it can actually fly. I just don’t know what the equivalent might be for a vehicle – a “brrmm!” test, perhaps? 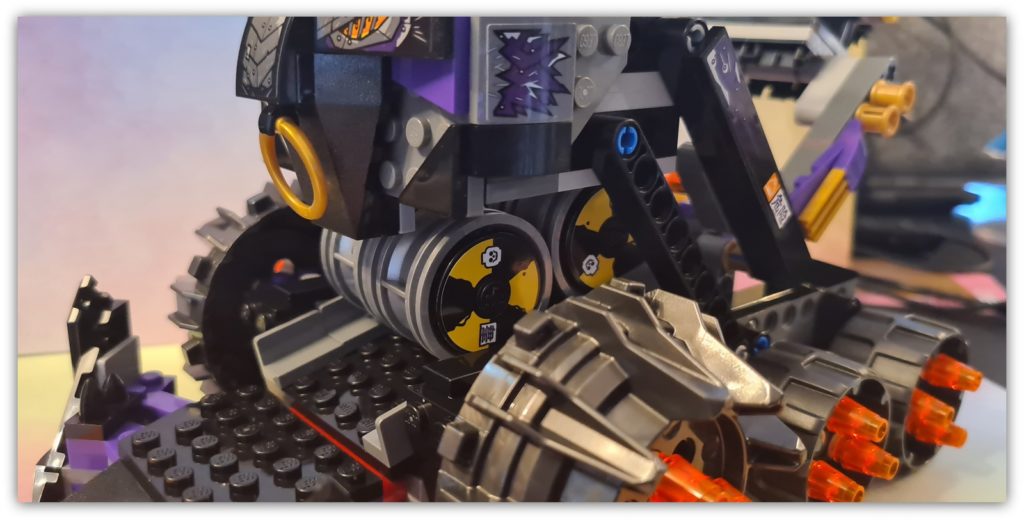 Finally, there’s the barrel dispenser and this was both simple and ingenious.  Because there’s a slope in the main body of the tank, when you lift the driver’s compartment (by pushing down on the gun turret) the barrels just come rolling out with no need to push at all! The barrels themselves are a simple construction of two wheels each; but they do work so well.

But that’s not all!

As an AFOL I love finding the interesting and unusual elements in the build. For many of the vehicles the designer may include their initials in the registration plate. This time, it wasn’t a “who” but a “what”. 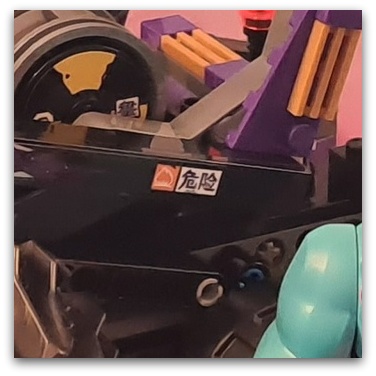 As this build was based on Chinese tales, I wondered if the stickers could mean something.  My phone has a translation feature and if you point the camera at something it will automatically identify and translate the words.  Whilst it couldn’t decode most of the lettering, the sticker in the image above translates from Chinese and says “Danger” – perfect Health and Safety on a vehicle that releases what looks like radioactive barrels!

At the moment, I’m not sure what the future might hold for the LEGO Monkie Kid theme. It was released ahead of the TV series and shows with little fanfare. I am concerned that with no cheaper sets many may hold off buying anything until the TV show hooks everyone in.  I did enjoy the build and perhaps later sets will mean that I can get the Pigsy character without having to spend about fifty pounds which would make the character expensive.

But the build is solid and I’m hoping that I can use Sandy in some of my other builds and photographs.

Oh, and one last thing: If you recall I chose the Iron Bull Tank for those headphones. As I was building I found that LEGO had put a second pair in the box; so both my sigfig and the Kid have them!