Although this article will primarily focus on the Cantina Denizens, I couldn’t gloss over the main characters in the scene. Luke Skywalker, Ben Kenobi, C-3PO, R2-D2, Han Solo and Chewbacca are all essential minifigures for any cantina diorama. Versions of all these characters are included in the Master Builder Series Mos Eisley Cantina

set. These characters can also be purchased from FireStar Toys. 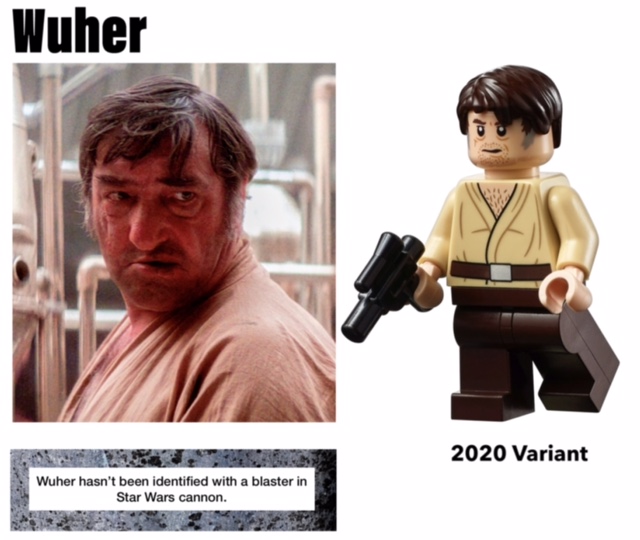 Wuher was the Cantina’s curmudgeonly bartender. He refused to serve droids after having a bad experience with separatist battle droids during the Clone Wars. Wuher minifigures have appeared in both the 2018 Cantina (set 75205) and the Master Builder Series Cantina (set 75290). I’m fairly sure the minifigures are identical. The LEGO designers deserve a lot of credit for capturing Wuher’s appearance without having to depict the characters distinctive nose.

The LEGO Mos Eisley Cantina wouldn’t be the same without the sweet music of Figrin D’an and the Modal Nodes. The Bith band comprised of Figrin D’an on the kloo horn, Nalan Cheel on the bandfill, Tedn Dahai on the fanfar, Sun’il Ei’de on the drum, Ickabel G’ont on the double jocimer, Tech Mo’r on the Ommni box and Doikk Na’ts on the Dorenian Beshniquel. The Master Builder Series cantina comes with three Bith musicians, just like the 2014 Cantina (set 75052). If you have both sets, you only need one more Bith minifigure to complete the band. I recommend purchasing Bith musicians from FireStar Toys until you have a minifigure to represent each of the seven band members. 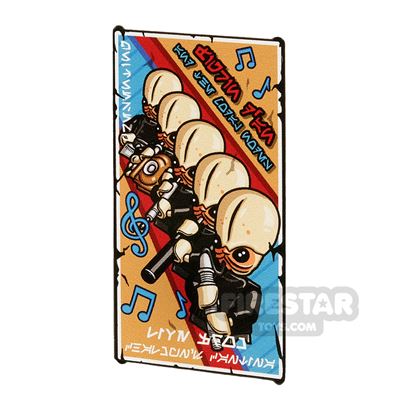 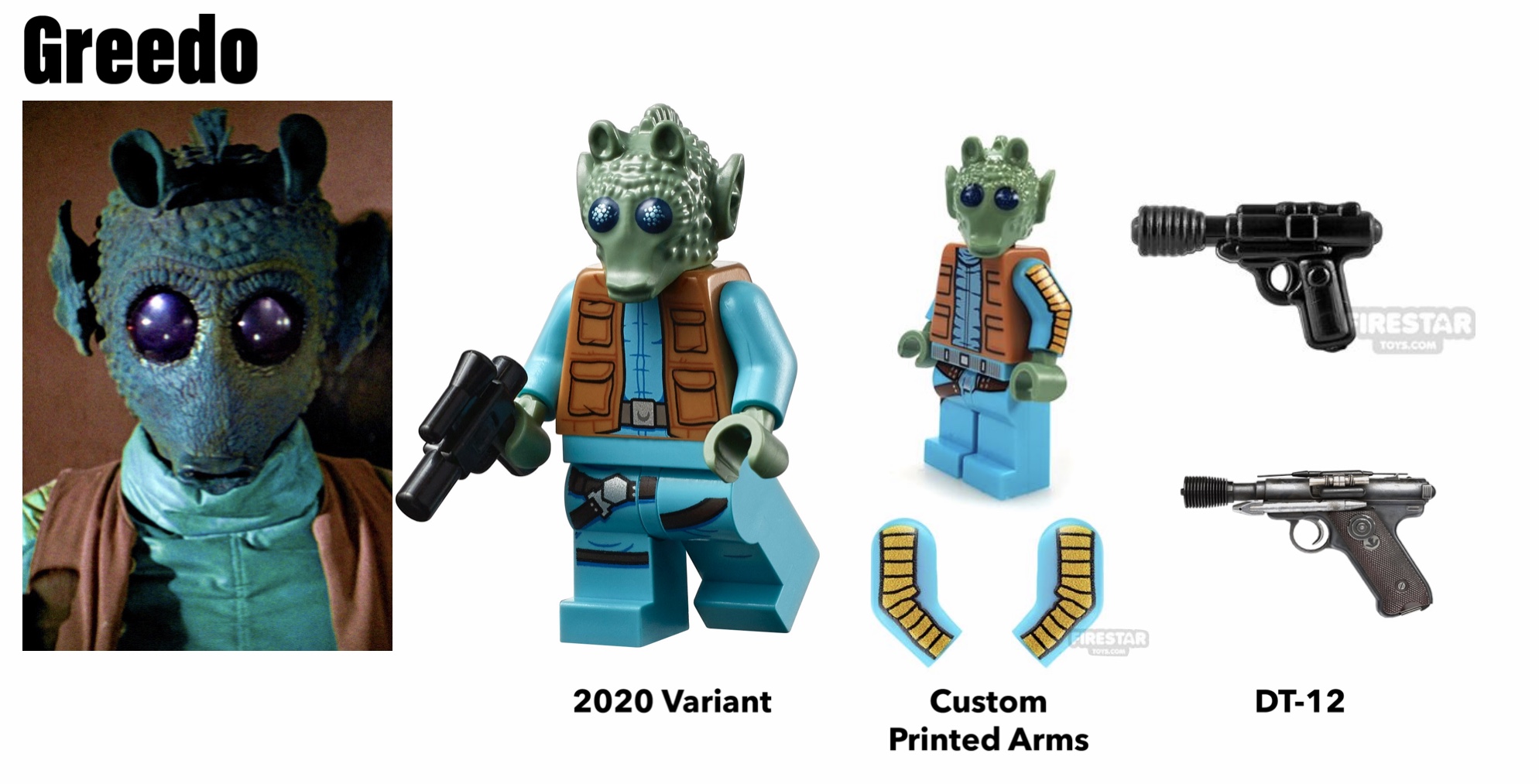 Greedo was a Rodian bounty hunter, hired by the notorious Jabba the Hutt to kill Han Solo. He has appeared in all four of LEGO Cantina sets. AFOLs still revere the 2004 Cantina (4501) for its arm printed Greedo. Even the latest Greedo minifigure doesn’t come with arm printing (and he’s included in a £320 set)! Fortunately, FireStar toys has made it easy to upgrade your Greedo minifigure. I suggest purchasing a pair of FireStar Toys custom printed arms and one of Brickarms’ DT-12 blaster pistol pieces. 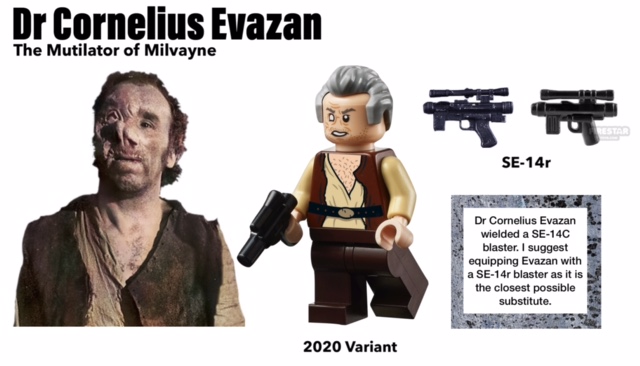 Dr Cornelius Evazan went by numerous titles and aliases including the Roofoo and the Mutilator of Mivayne. He was as wanted man; having earned the death sentence on twelve systems. The Master Builder Series Cantina (set 75290) was the first LEGO set to include a Dr Evazan minifigure. It’s pretty surprising LEGO took this long to produce a minifigure given the characters notoriety. I recommend getting this minifigure and equipping him with one of Brickarms’ SE-14r blaster pieces. 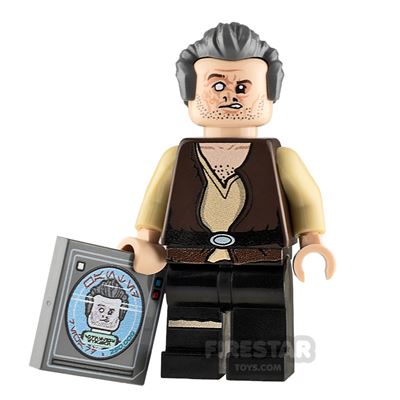 If the Master Builder Series Cantina is out of your price range, you could consider purchasing FireStar Toys custom printed Dr Evazan. The minifigure comes with an exclusive 2×2 bounty hunter terminal tile piece.

Ponda Baba was Dr Evazan’s aqualish side kick. Both him and Dr Evazan made a brief cameo appearance in Rogue One. Ben Kenobi chopped Ponda Baba’s arm off in the Cantina. The Master Builder Series Cantina introduced the first and only Ponda Baba minifigure. I suggest getting this minifigure and upgrading him with a pair of custom printed snowspeeder pilot arms. I recommend equipping your Ponda Baba minifigure with Brickarms DL-44 blaster piece. (Other custom weapons companies also produce high quality Star Wars blaster pieces that are worth checking out on the FireStar Toys product page). 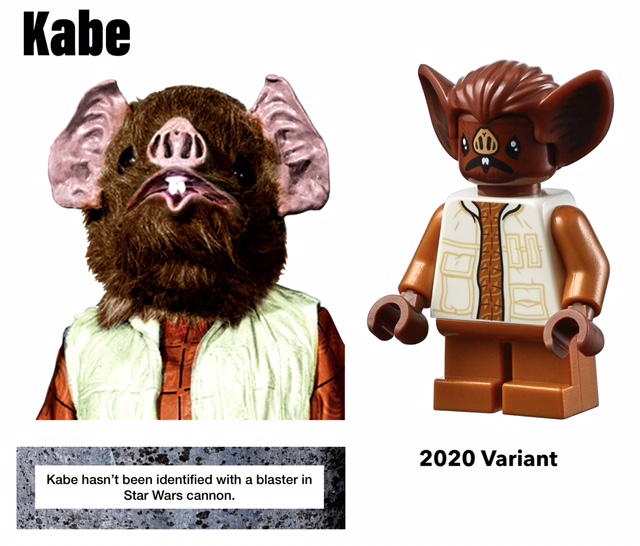 Kabe was a female Chadra-fan. She lived in the maintenance tunnels under the cantina along with a fellow cantina patron, Muftak. LEGO recently released a Kabe minifigure in the Master Builder Series Cantina (set 75290). Kabe hasn’t been identified with a specific blaster so I recommend perusing the FireStar Toys product page to find an appropriate weapon for her. 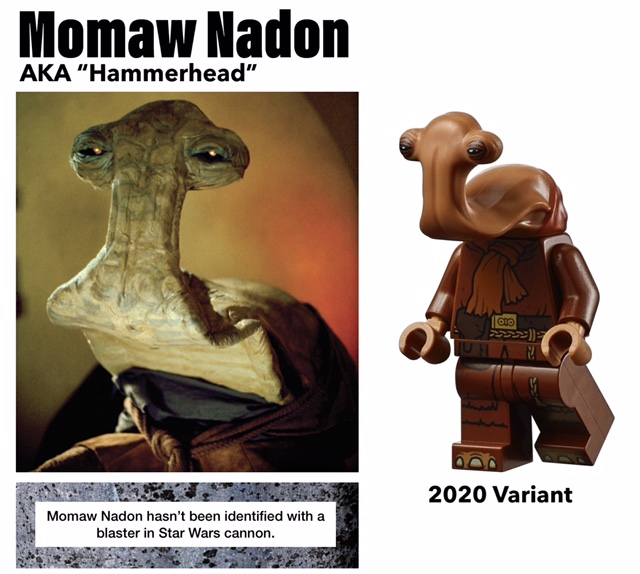 Momaw Nadon was an Ithorian Cantina patron. He was commonly referred to as “Hammerhead”. After he revealed the agricultural secret of his species to the empire he was exiled from his homeworld of Ithor . He is the second Ithorian to be made in minifigure form. LEGO included an Ithorian Jedi, Noga-ta (aka Rusty) in set 75051, Jedi Scout Fighter. Momaw Nadon hasn’t been identified with a blaster in Star Wars Cannon, so I suggest picking any blaster the FireStar Toys weapons page. 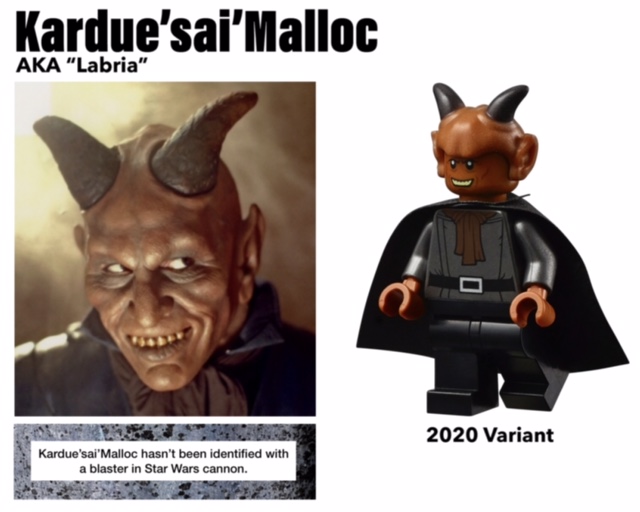 Kardue’sai’Malloc was a Devaronian cantina patron. He fled to Tatooine after abusing his role as a military captain on his homeworld of Devaron. He began working as informant, although he proved to be entirely unsuited to a spy’s career. The Kardue’sai’Malloc minifigure can be found in the Master Builder Series Cantina. Unfortunately, Kardue’sai’Malloc hasn’t been identified with a blaster, so I recommend selecting a weapon for him from the FireStar Toys Weapons page. 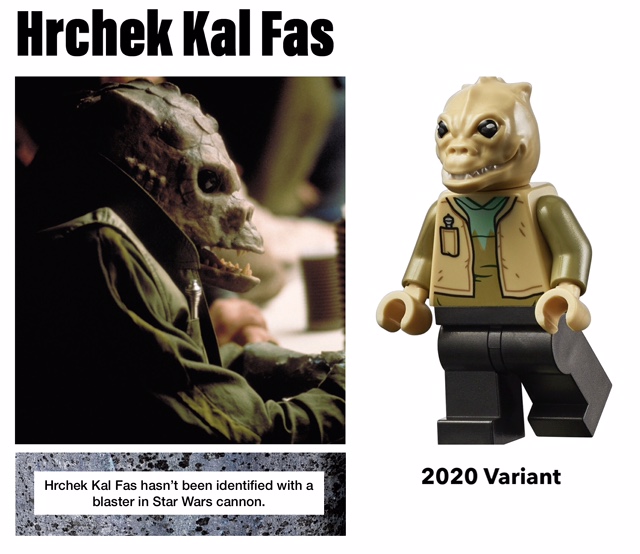 Hrchek Kal Fas was a Tatooine droid trader. The alien’s lizard like head led me to believe that Hrchek Kal Fas was Trandoshan, however upon further research it turns out Hrcheck was a member of the Saurin species. Set 75290 included the first LEGO Hrchek minifigure. He hasn’t been identified with a specific blaster so I recommend looking through the FireStar Toys product page to find an appropriate weapon for him. 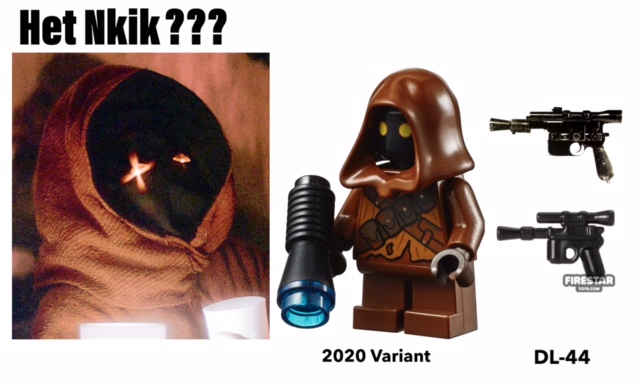 The Master Builder Series Cantina included a Jawa minifigure. LEGO could be trying to represent, Het Nkik, a Jawa that can be spotted sitting in the Cantina. Very little is known about this Jawa in Star Wars cannon. However, in Star Wars Legends, Het Nkik was a radical Jawa who believed that his species could overthrow its enemies (e.g., Tusken Raiders and the Empire). In Legends, Het wielded a DL-44 blaster. For this reason, I recommend equipping Het with Brickarms DL-44 blaster piece. 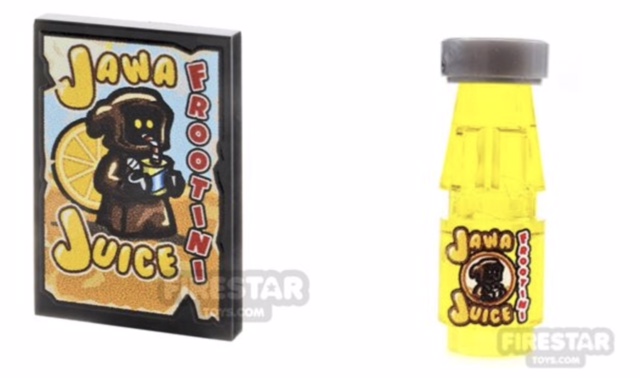 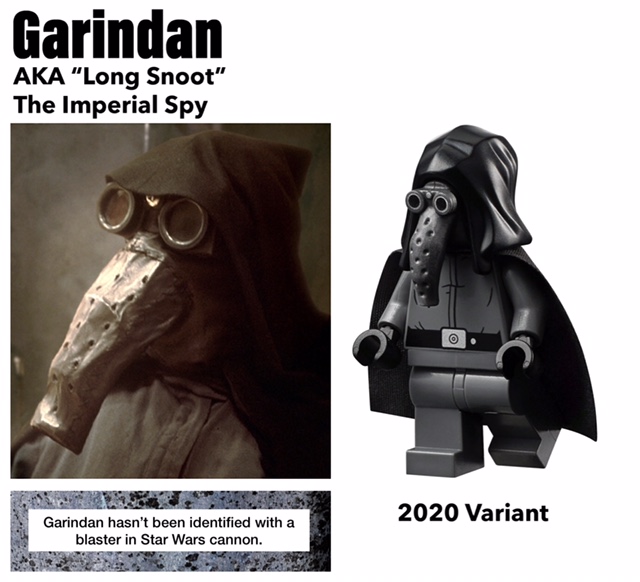 Garindan was a member of the Kubaz species. He served as a spy for the Galactic Empire, informing Imperial Sandtroopers of the rebel droids’ presence in Mos Eisley. Although Garindan played a large role in LEGO Star Wars the Complete Saga video game, LEGO first produced an official Garindan minifigure in the 2020 Mos Eisley Cantina set. Rather than equipping Garindan with a random blaster from FireStar Toys weapons page, I suggest giving him a black radio piece. 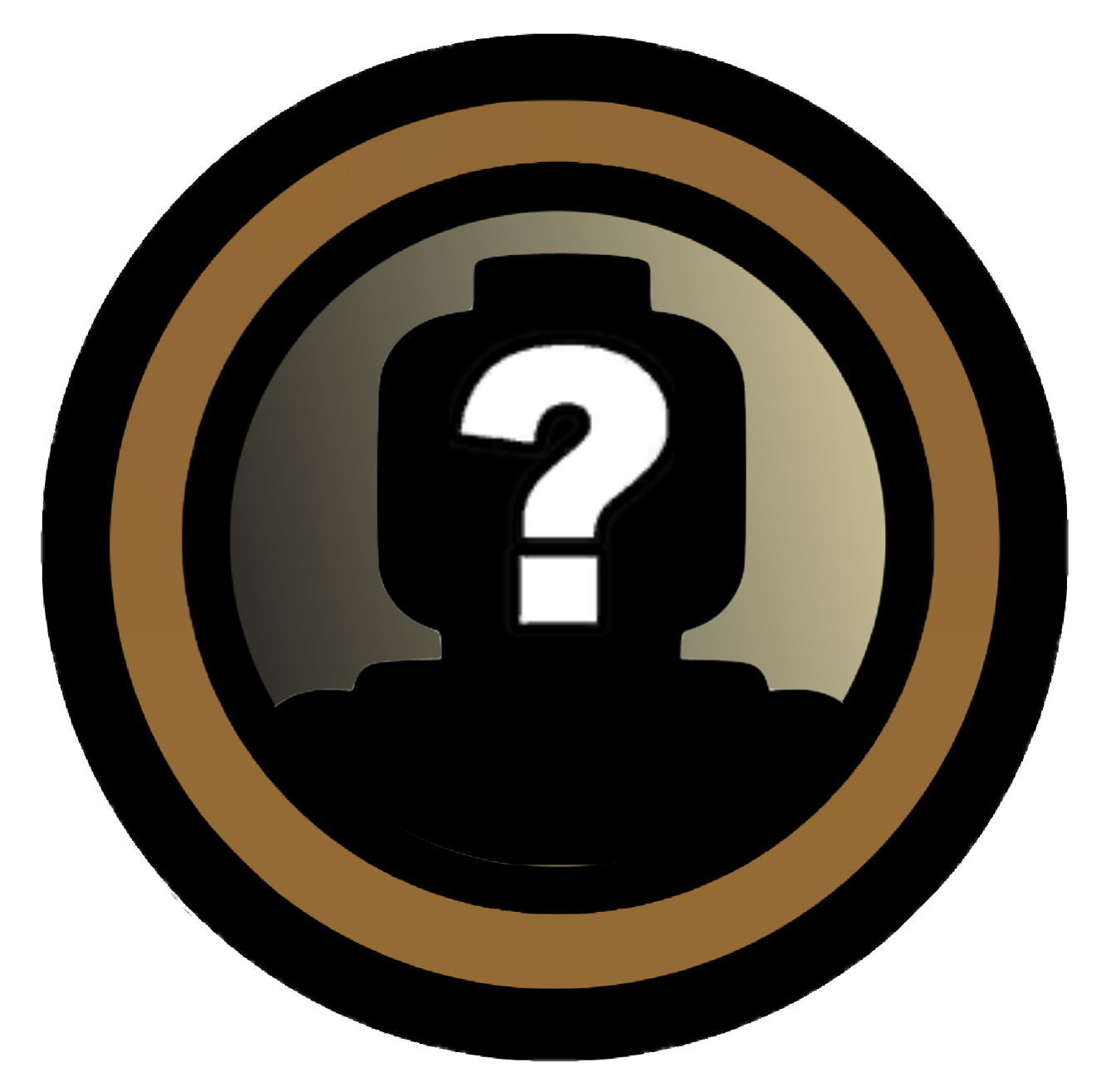 Although Cantina sets have included an extensive range of minifigures, they have yet to include all the major cantina patrons that fans fell in love with back in 1977. In this section of the article, I will examine custom minifigure ideas so fans can fill the void in LEGO’s minifigure range. 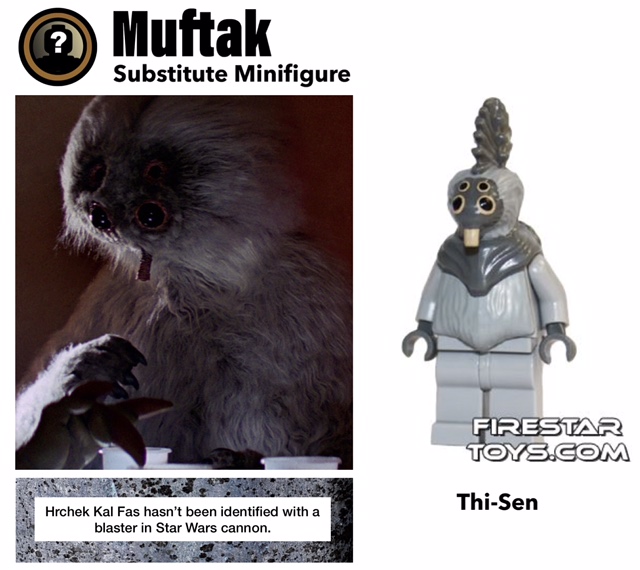 Tragically, LEGO has never produced a Muftak minifigure. This is practically criminal. Muftak and Kabe go together, like cheese and wine. You can’t have one without the other. However, LEGO included a Kabe minifigure in the Master Builder Series Cantina, but they failed to include a Muftak minifigure. Fortunately, LEGO included a Talz alien (Muftak’s species) in set 8085, Freeco Speeder. I suggest using this minifigure as a direct substitute for Muftak in any LEGO Mos Eisley Cantina diorama. 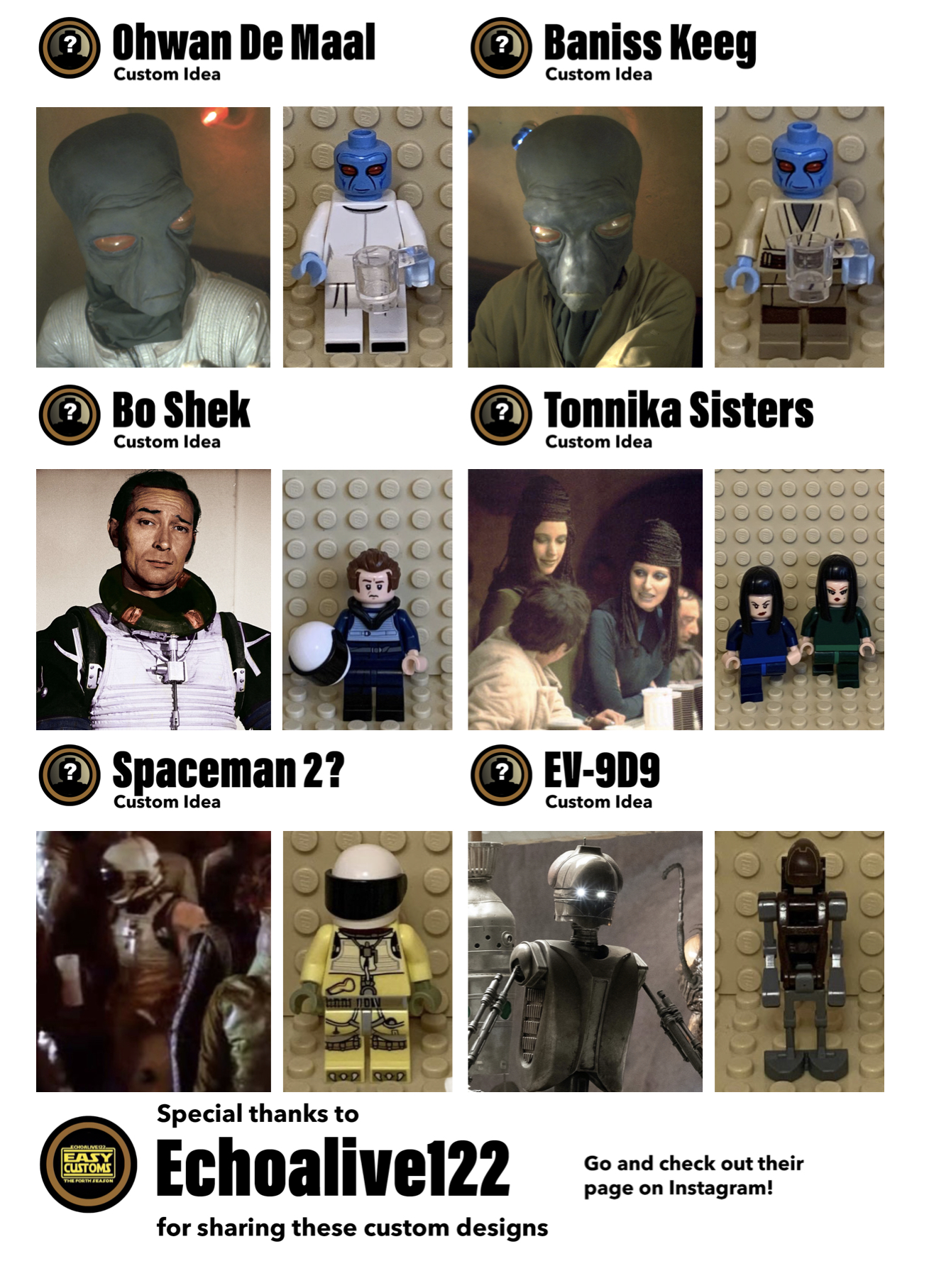 The LEGO Instagram community has been getting creative, designing awesome custom Mos Eisley Cantina minifigures. Echoalive122 created a series of different minifigures from the Tonika Sisters to EV-9D9 (the bartender droid in the Mandalorian). I think they’re all incredible. Definitely check out his Instagram page if you want to discover how to make them for yourself. 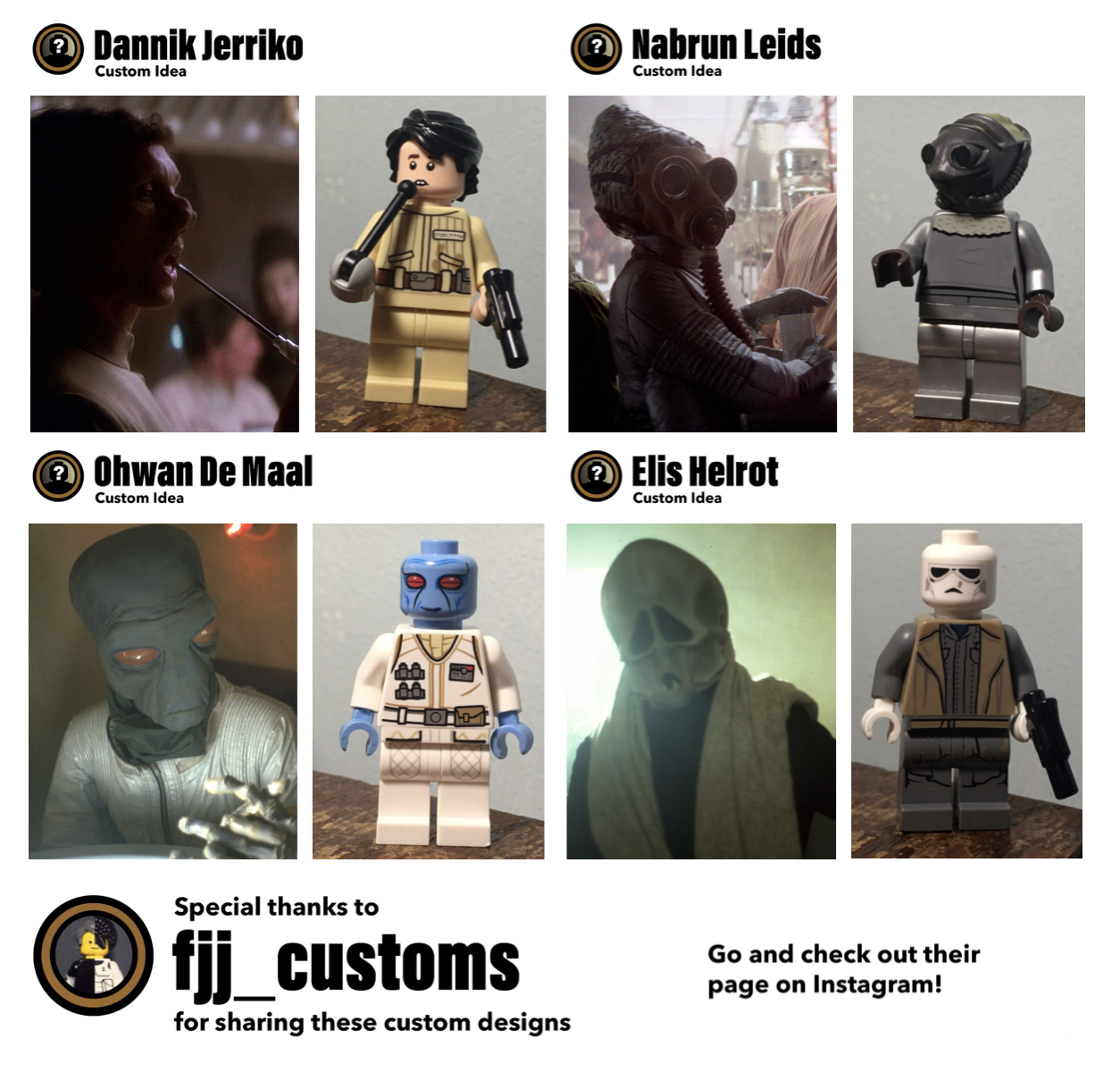 fjj_customs also created some of the lesser-known Cantina characters. His Nabrun Leids is just superb. The Teedo headpiece couldn’t be any more perfect for this minifigure. I highly recommend you check out his Instagram page to see more of his incredible custom creations.

Disney Plus’ hit Star Wars show, The Mandalorian heavily featured the cantina in Chapter 5, The Gun Slinger. This next section of the article will examine Mandalorian minifigures that would fit appropriately in any Cantina diorama. 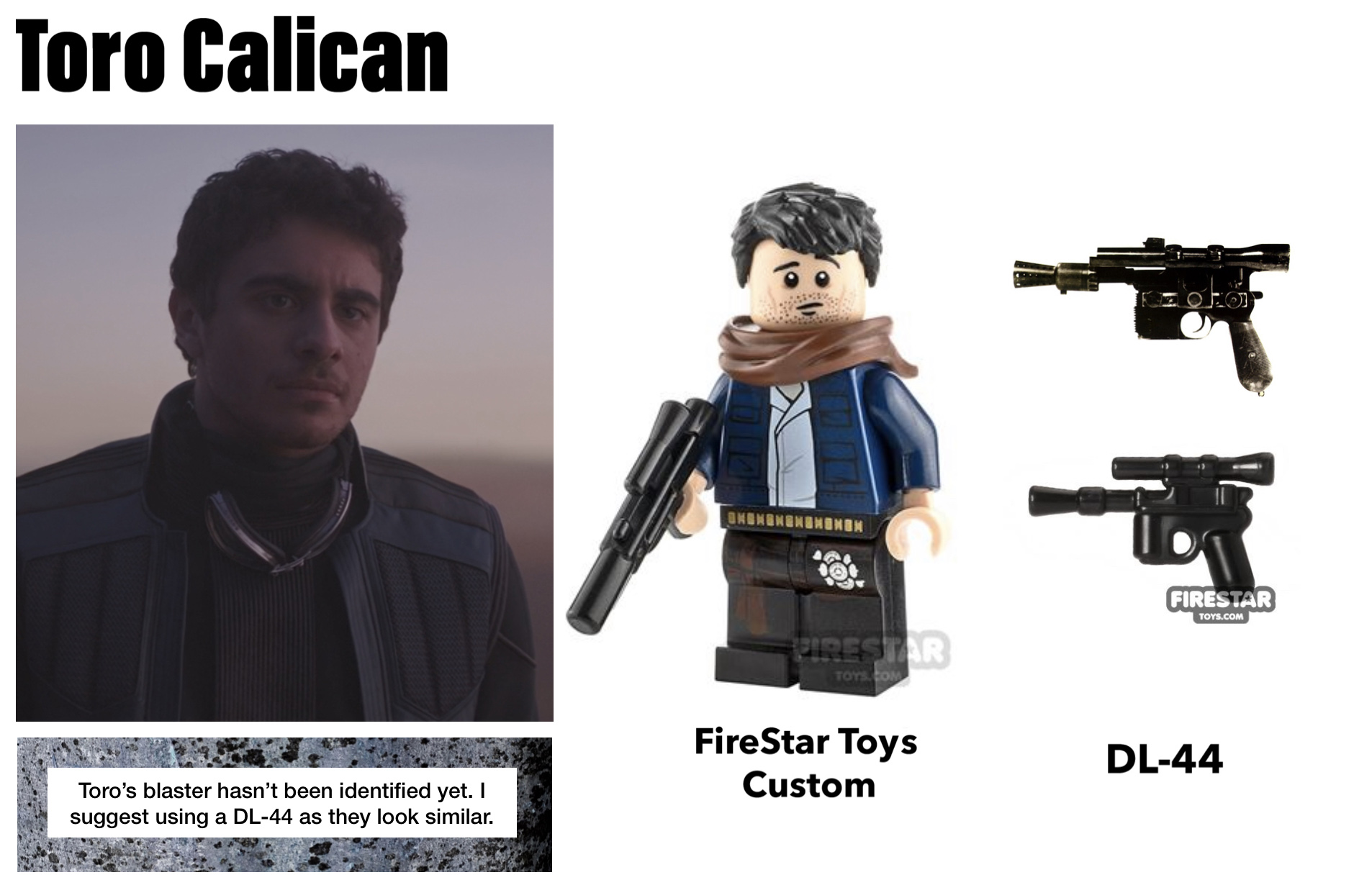 Toro Calican was a rookie bounty hunter. Played by Jake Cannavale, Toro appeared in Chapter 5, the Gunslinger. Due to the characters limited screen time, LEGO may never produce a Toro Calican minifigure. Fortunately, FireStar Toys has produced a custom version of the minifigure, perfect for any Calican fan. I recommend equipping Toro Calican with a DL-44 blaster as the weapon closely resembles Calican’s blaster. 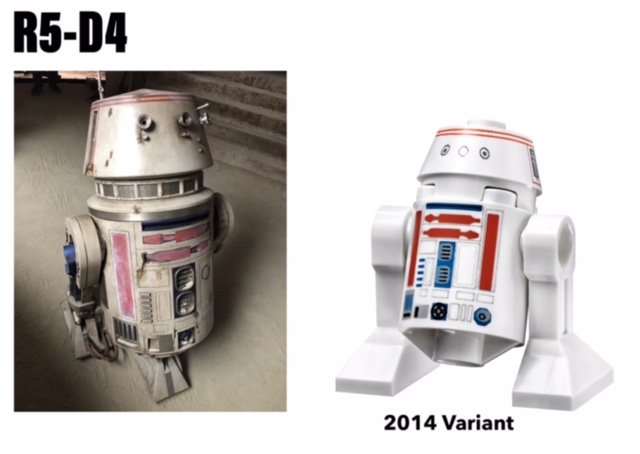 After his motivator broke drown, Luke Skywalker returned R5-D4 to the Jawas. Star Wars fans were left wondering what happened to the plucky little astromech for decades. The Mandalorian answered that question! Turns out he now works for Peli Motto and can often be seen in Chalmun’s Cantina. LEGO included an R5-D4 minifigure in the UCS Sandcrawler meaning you can easily add R5-D4 to any Cantina Diorama.

Thanks for taking the time to read this article. Do you have the Master Builder Series Cantina? Which is your favourite Cantina minifigure? Let me know in the comments section down below. If you enjoyed this article please consider checking out my article on “Ways to Equip the LEGO Stormtrooper”. I suspect you’ll enjoy it.

Special thanks to Echoalive122 and fjj_customs for helping me with this article. I really appreciate their contributions. If you haven’t already please check out their accounts as they continually produce some of the best LEGO content on Instagram.

The images article were taken from Brickset, Wookiepedia and StarWars.com