Taking an inspiration from the 1999 Rock Raiders theme, LEGO Power Miners was an original theme with a run from January 2009 to 2010. The theme consisted of two waves connected together story-wise. The story revolved around a group of scientists who were sent to explore what exactly had been causing the series of massive earthquakes all around the globe, destroying several cities. The scientists dug deep under the surface into the Earth’s crust and found out the source of the earthquakes. They discovered that it was caused by Rock Monsters eating the power crystals. When they ate the crystal, it released so much energy that it caused the Earth to shake.

The scientists decided to collect all the crystals, so they could not be eaten by the monsters anymore. During this procedure, they ran into the Crystal King, the leader of all the Rock Monsters. When trying to fight him, they accidentally dug into a cave floor, which caused them to fall into the Earth’s inner core. There they had to face another type of monsters, this time the Lava Monsters, who ate the lava crystals instead of the power ones. It is uncertain how the story ends, because the theme was discontinued after this wave.

The science team consisted of 4 main members. Doc., the leader of the whole operation, Rex the engineer, Duke the mining expert and Brains the main scientist. They were accompanied by other, not-so-important guys. Brains has also appeared in Atlantis line.

There were two types of the Rock Monsters as well as their King. There were five of the small ones: Boulderax the green one, Meltrox the red one, Glaciator the blue one, Sulfurix the neon one and Firox the orange one. Then there were two larger ones, the throwing monsters, as they were called by the scientists: Geolix, the neon one and Tremorox, the red one. And finally, the Crystal King, a brick-built figure with only his head being a special mold. He had his own set, which we will talk about that later on.

As for the Lava Monsters, there were three small ones: Firax the orange one, Combustix the yellow one and Inferox the red one, as well as one throwing monster, the large Eruptorr. The throwing monsters truly were throwing ones. One of their hands was a catapult operated by a small lever. It was used to catapult the smaller monsters.

The first wave of LEGO Power Miners came out in January 2009 and was enriched by a bigger summer wave the same year. All the sets “took place” in the Earth’s crust. The scientist wore a blue and white worker-like suits and the colour scheme for the vehicles was mostly lime green and orange. 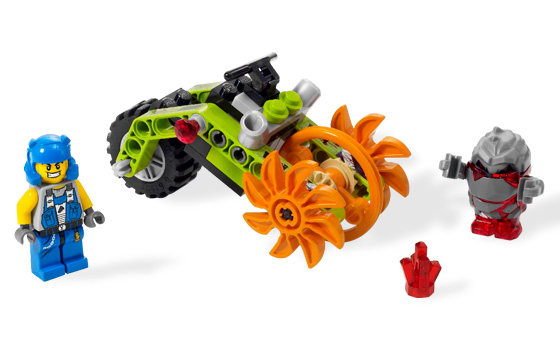 The smallest set of the whole wave, it featured only a small mining bike and two minifigures: Duke and the red Lava monster Meltrox. It included 31 pieces and retailed for 6 bucks back then. 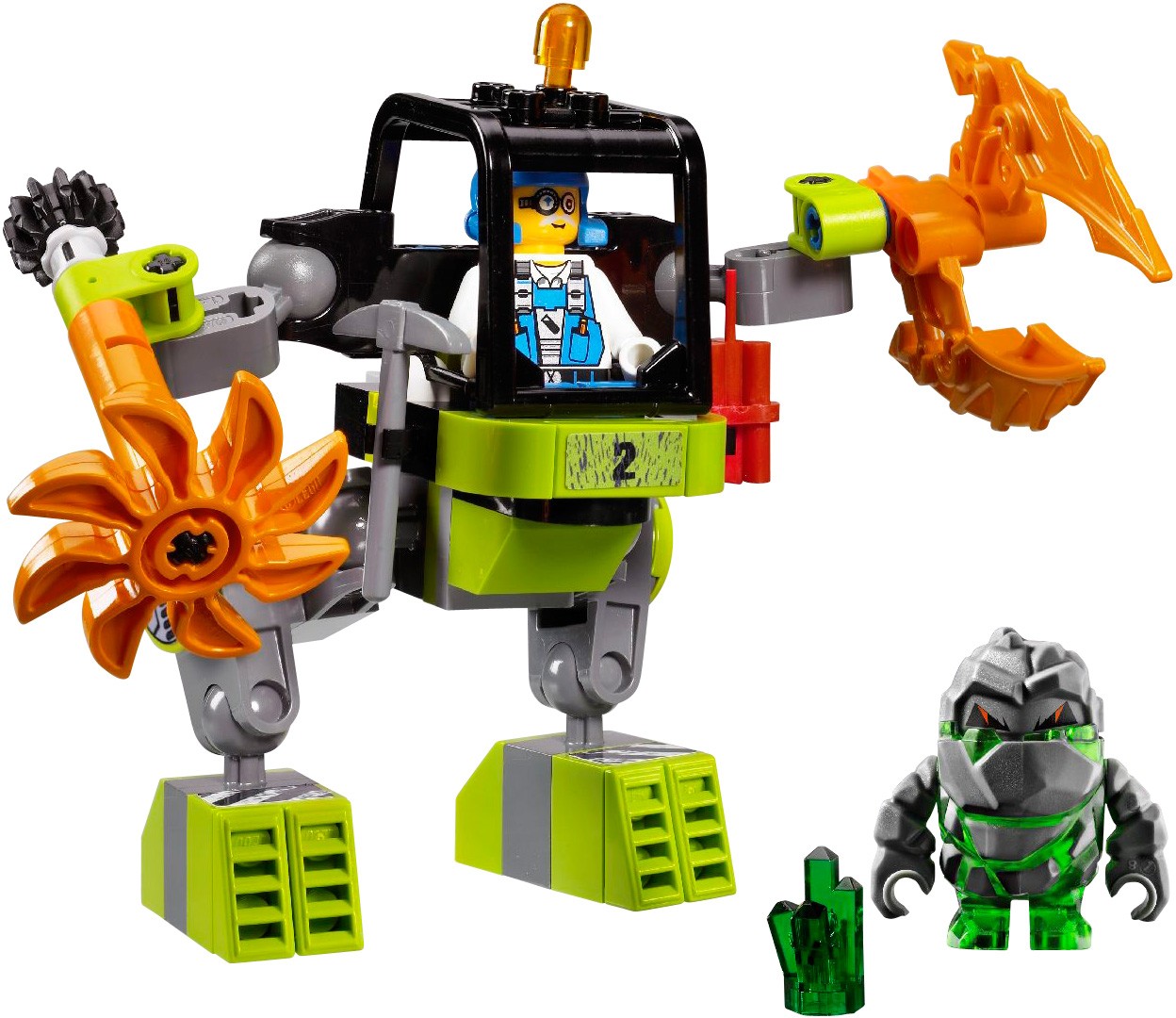 Being slightly bigger than the previous set, it included 67 pieces and costed 8 bucks. The build was a small mining robot with one crab-like arm and a second one with a rotating mining gear. It came with two minifigures: Brains and Boulderax, the green monster. 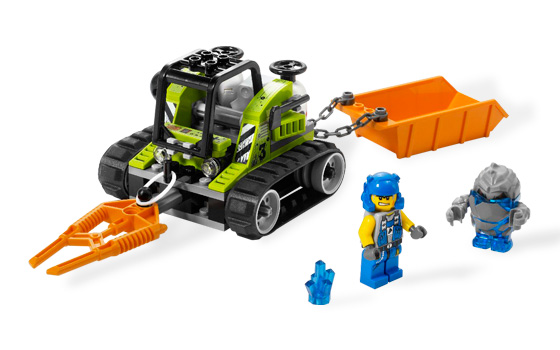 Next set featured a small tracked vehicle with mining forks. It had a little function, when you were driving the Grinder, it made the forks move back and forward evoking actual mining or drilling. It featured two minifigures: Duke and the blue monster Glaciator and included 94 pieces retailing for 10 dollars. 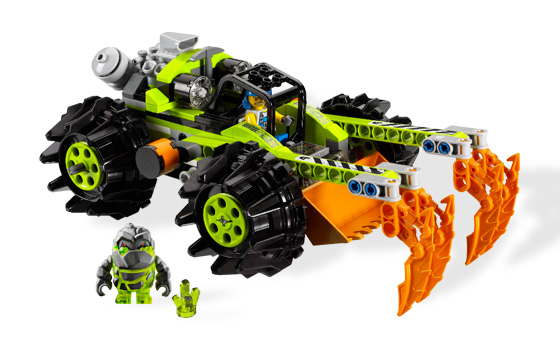 With a price of 20 dollars, the Claw Digger was a middle sized set. It was a four-wheeled vehicle with two giant mining claws. There was little playability, you could dig with the claws using a little button on the side. It included 197 pieces and two minifigures: Rex and Sulfurix, the neon monster. 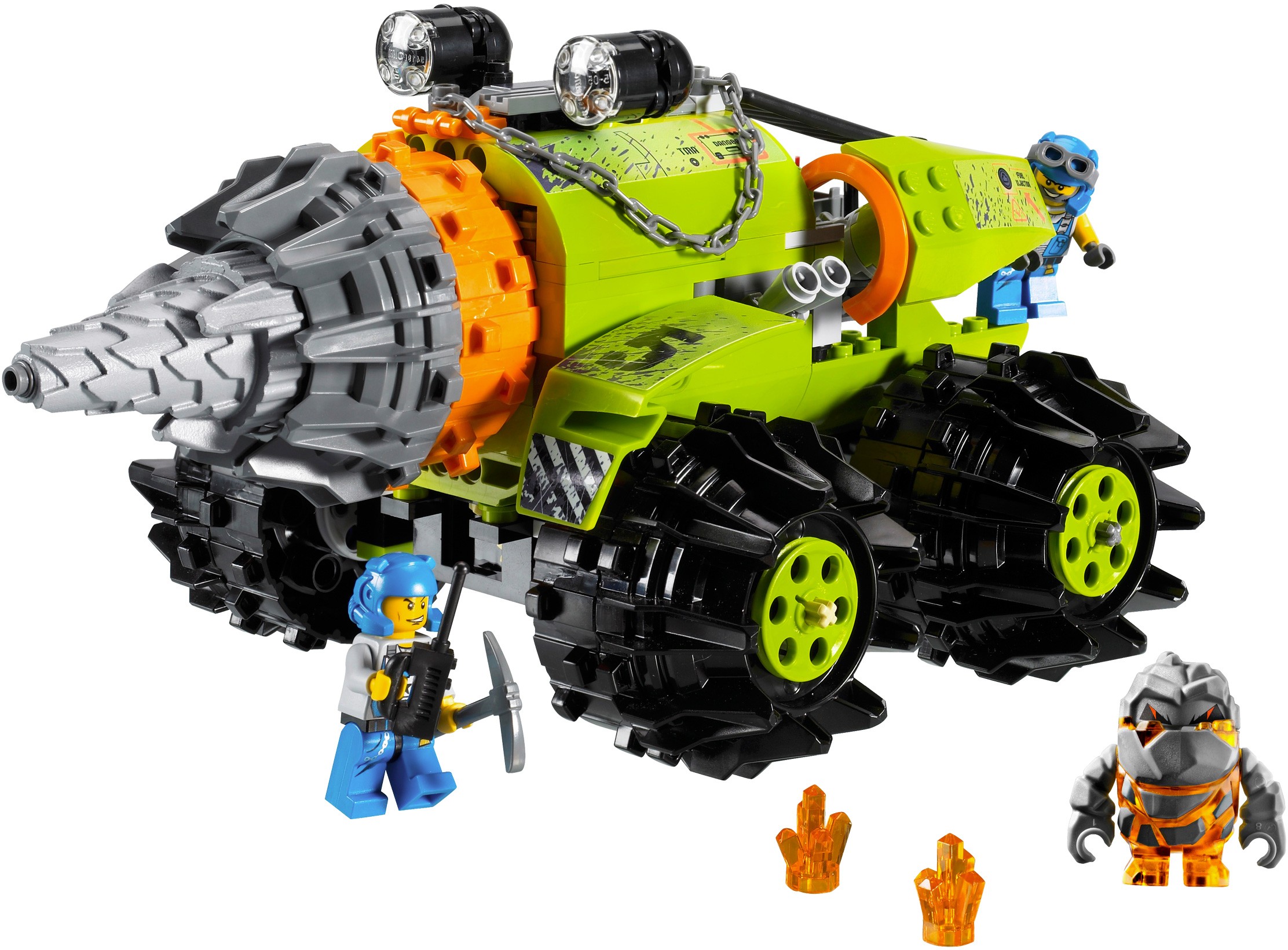 Thunder driller was a bulky four-wheeled vehicle with a massive drill in the front of the vehicle. The drill rotated when you drove the vehicle. It included 235 pieces, retailed for 30 dollars and for the included three minifigures for the first time: Doc., Duke and the orange monster Firefox. 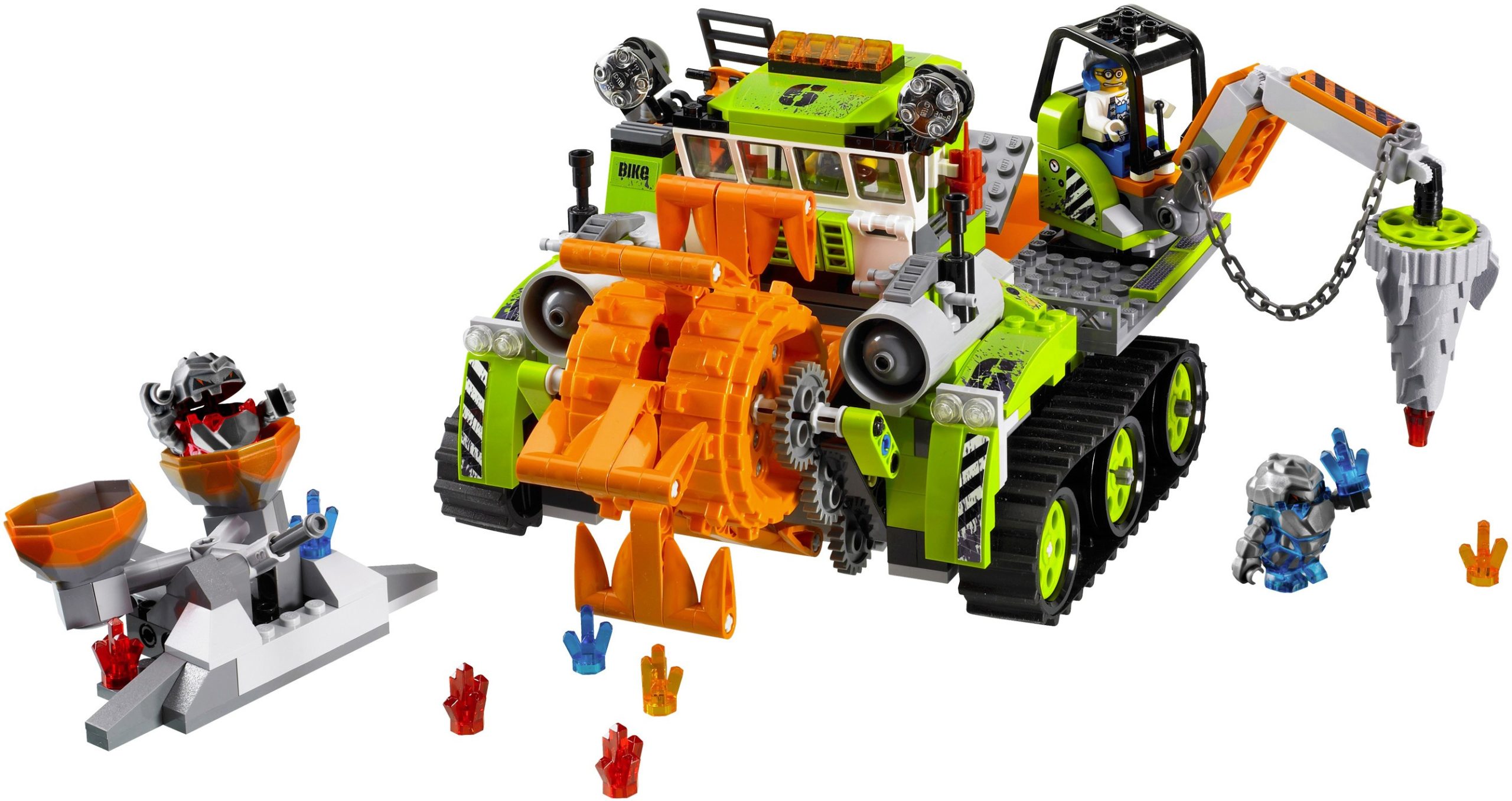 Being by far the largest set of the January LEGO Power Miners wave with a price tag of 60 dollars, the Crystal sweeper functioned as a sort of mobile center for the scientists in the first half of the 2009 wave. It was a large tracked vehicle with a command center in the front,  together with a crystal collector ( that one was a play feature, when you drove the vehicle it was rotating and collecting the crystals on the ground ) and a little mining platform in the back right corner of the vehicle. The monsters were equipped with a double catapult that they could use to shoot themselves at the Sweeper. This set included 474 pieces and four minifigures: Brains, Duke and two Rock Monsters, red Meltrox and blue Glaciator. 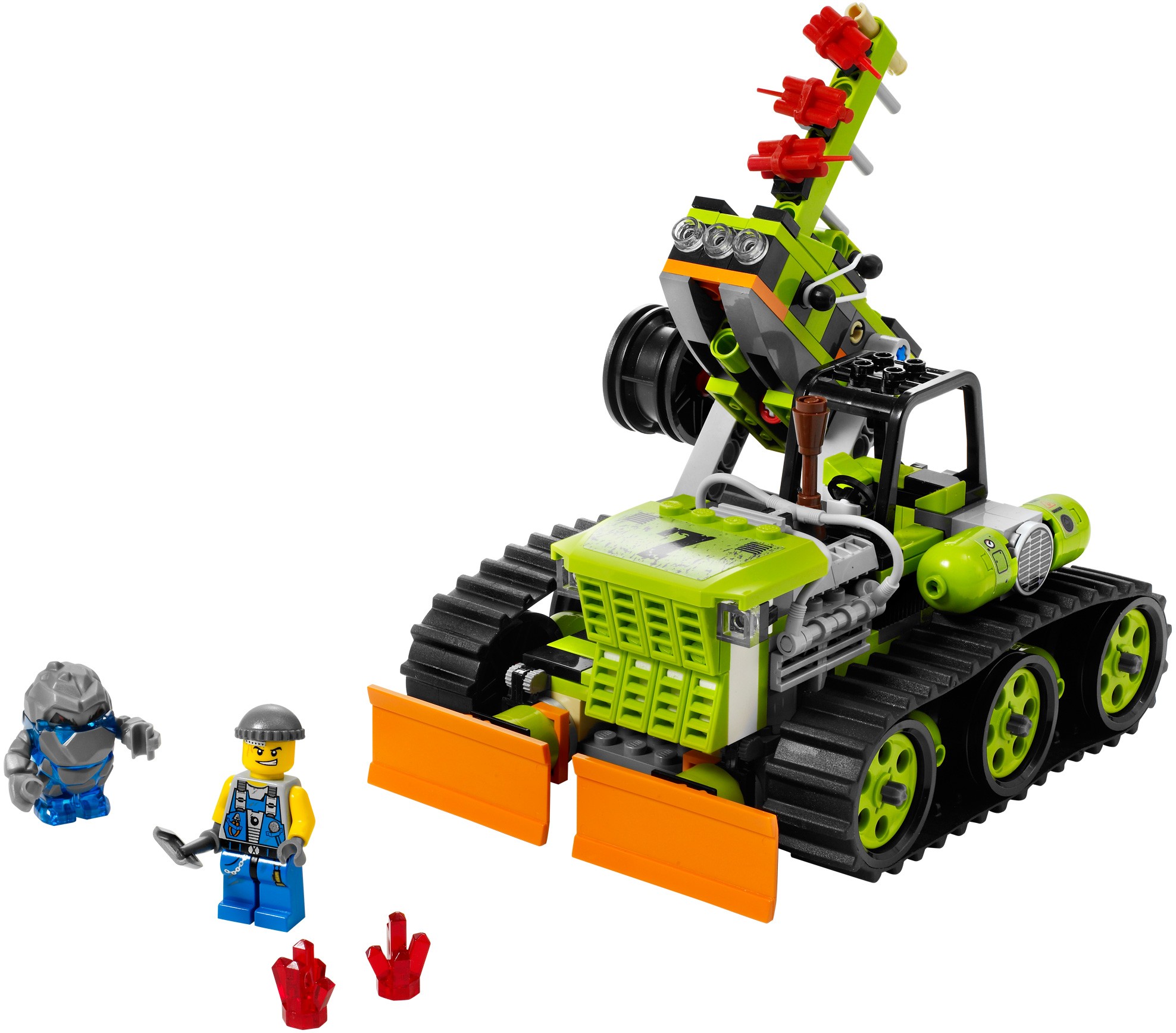 Although being a part of the first wave, it stood out of the numerical order, that is due to it being a limited edition. There was a bulldozer-like vehicle with a dynamite throwing function. The set consisted of 293 pieces and came with two minifigures: Rex and the blue monster Glaciator. It retailed for a strange price of 27 dollars. It was considered a Toys”R”Us exclusive in the US, but it was more widely available in Europe. 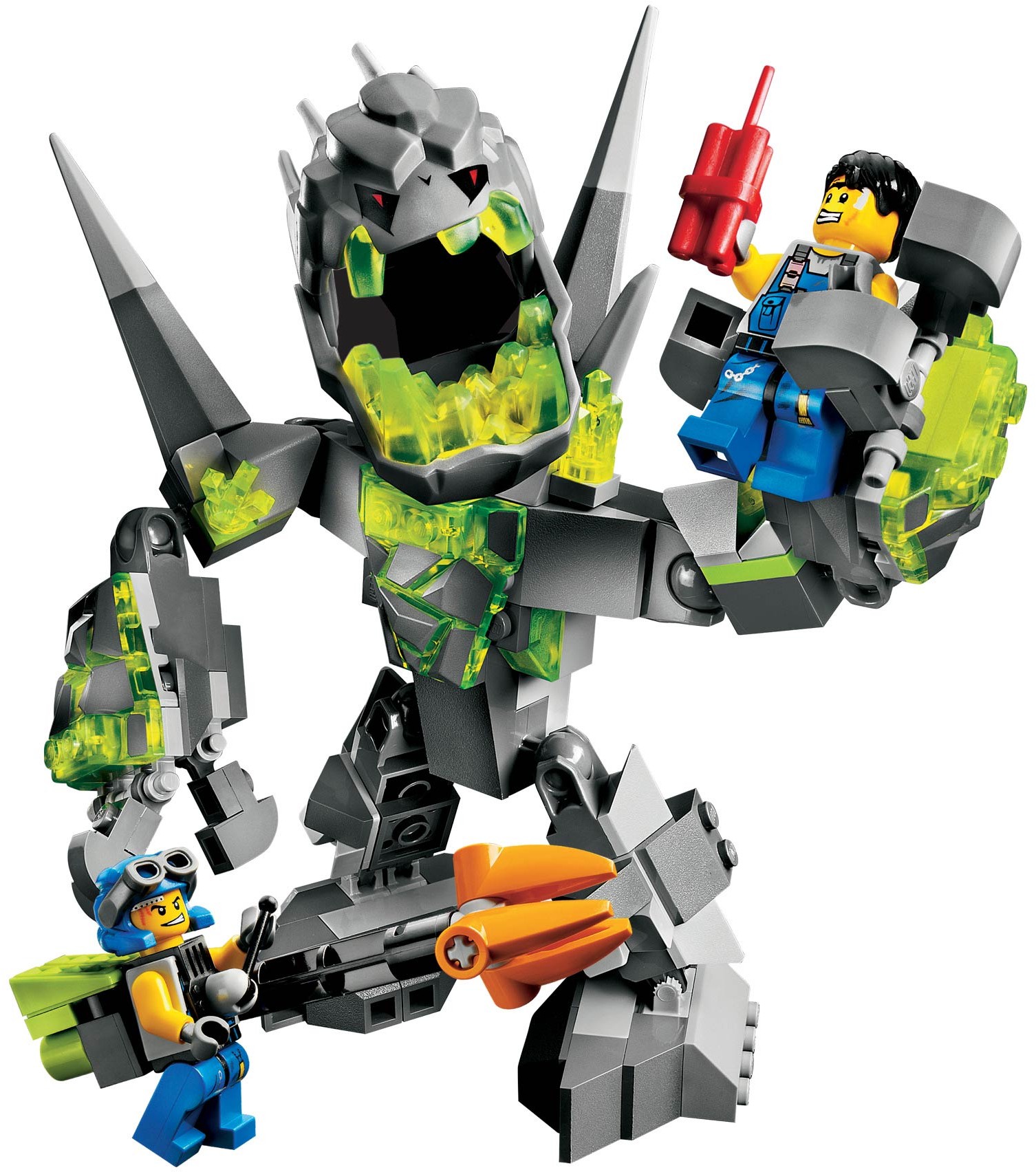 The smallest set of the summer wave with price tag of 20 dollars, it featured a large brick-built figure of the Crystal king with a molded head and a giant hand drill for the miners. It included 168 pieces and two minifigures to fight with the Crystal King: Duke and Rex. 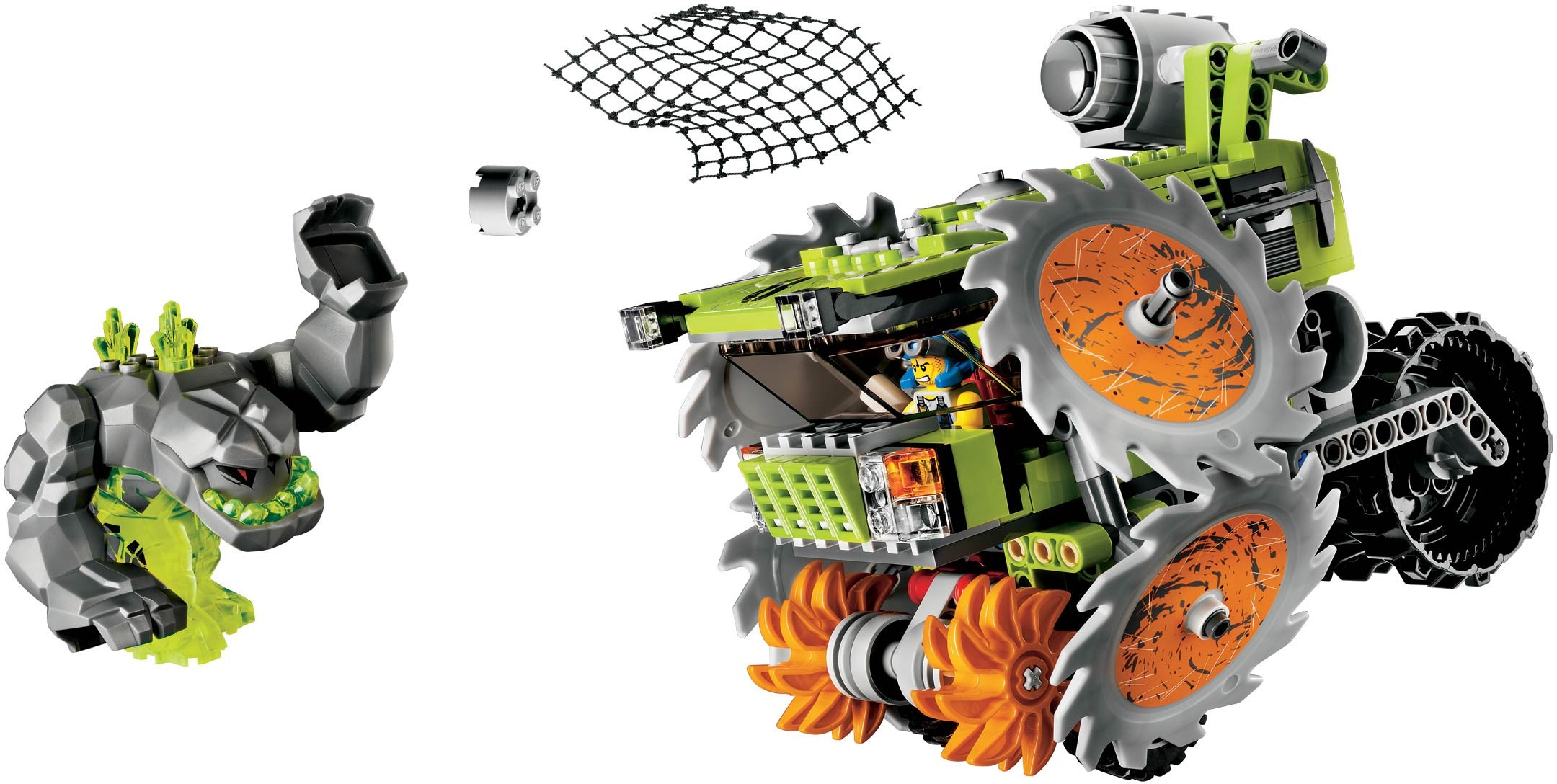 The Rock Wrecker was the first set numerical-wise that included a throwing monster, with the inclusion of the neon one called Geolix. It was a decent sized vehicle covered with several drilling wheels and equipped with a net thrower used to capture the monsters. With Geolix already mentioned, it included only one other minifigure, Rex. It included 225 pieces and retailed for 35 dollars. 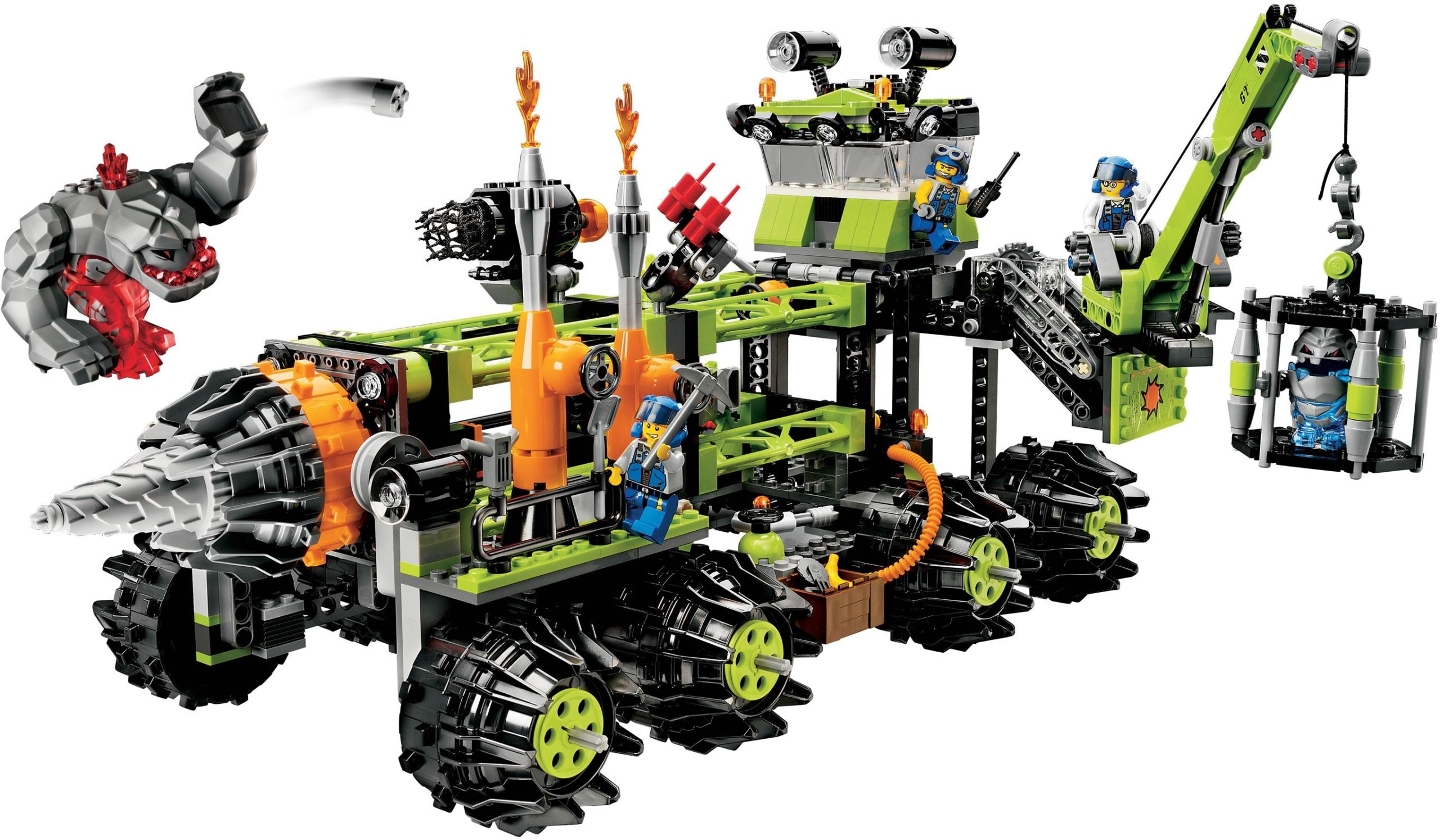 With a price tag of 100 dollars and its massive build, it was by far the largest LEGO Power Miners set to be ever produced. It was a giant eight-wheeled command center equipped with a giant convertible mining tower, a command bridge and even a small prison cage for the Rock Monsters. It was built from 706 pieces and included 5 mini figures: Doc., Brains, Duke, the blue Rock Monster Glaciator and Red throwing monster Tremorox. 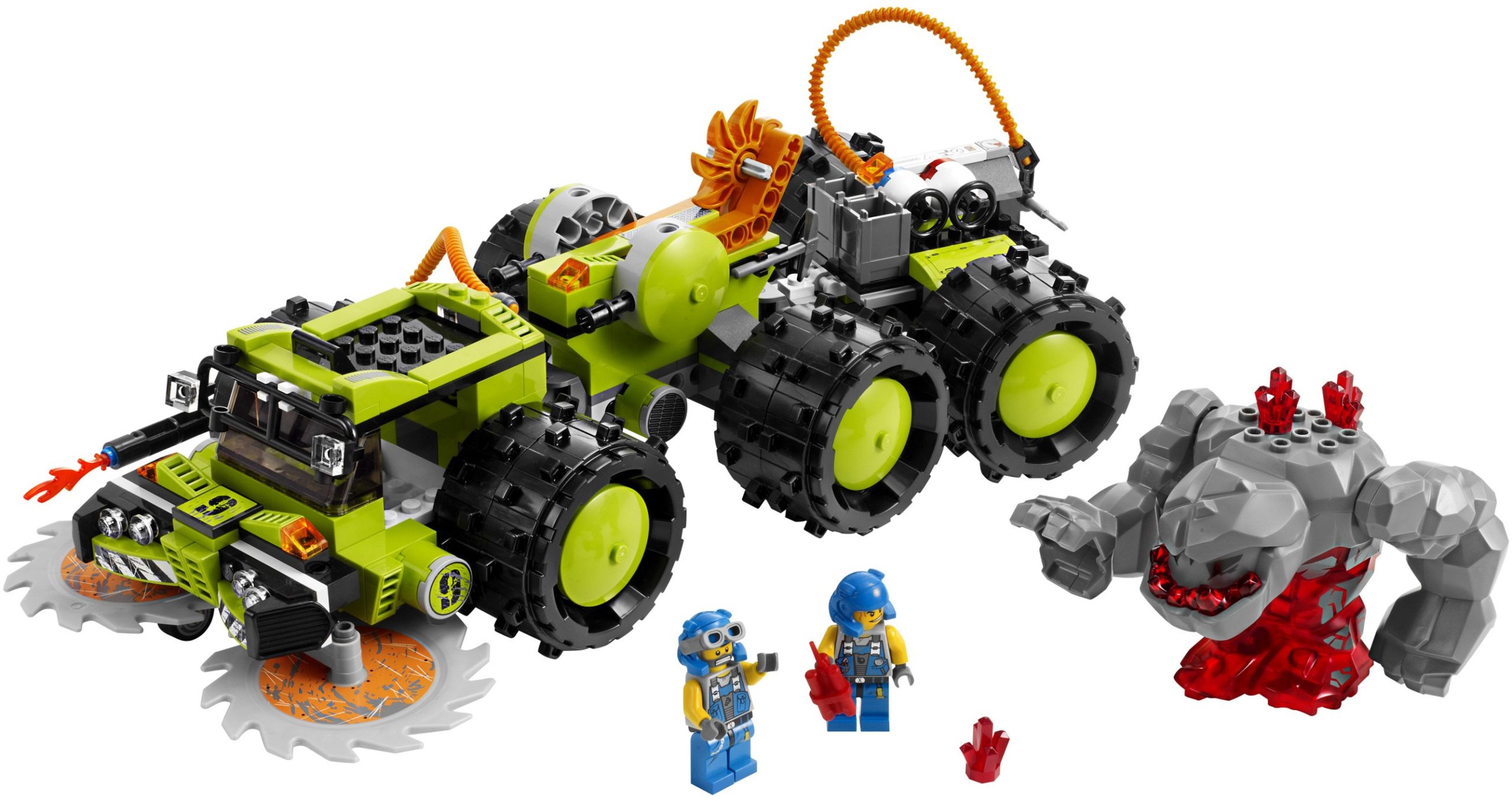 Another set out of the numerical order due to it being a special edition, Target exclusive in the US, it was a long six-wheeled vehicle with two mining wheels in the front and a flexible joint in the middle. It included three minifigures: Duke, Rex and the red throwing monster Tremorox. It retailed for 50 dollars. 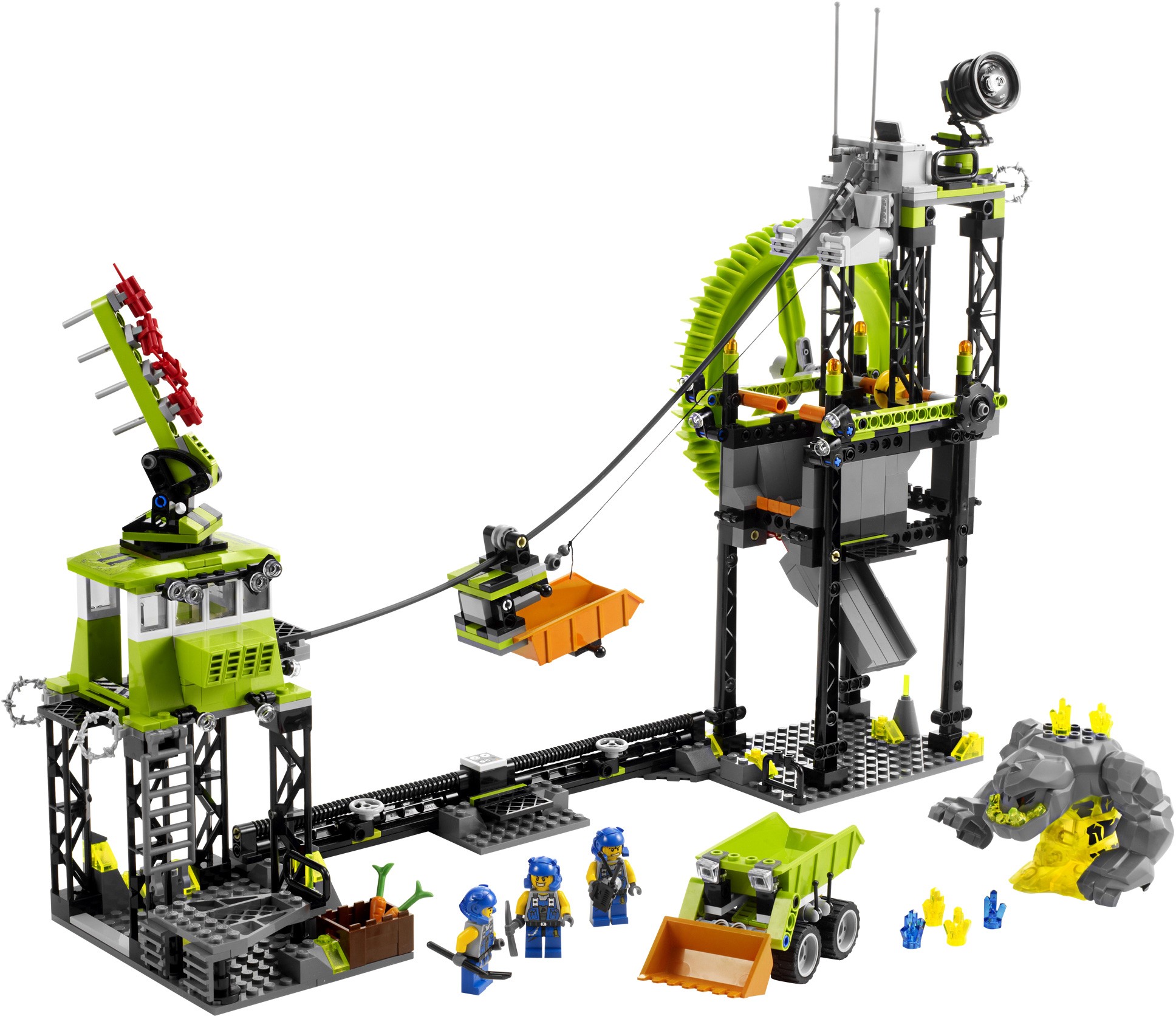 Last set of the wave numerical-wise, it was the only “building” in the first wave. It consisted of two towers connected via cableway and a small rock and crystal collecting vehicle also came with the set. Four minifigures were included: Duke (two versions of him), Rex and the neon throwing monster Geolix. It consisted of 637 pieces and retailed for 80 dollars. 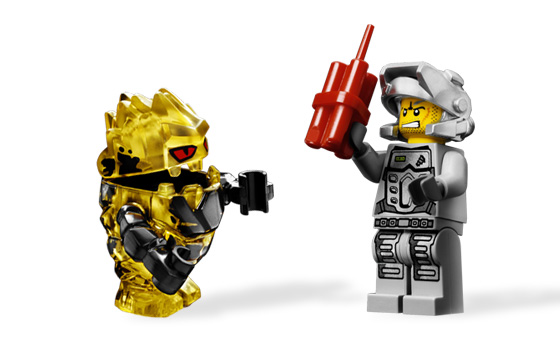 The second wave of LEGO Power Miners took place in the Earth’s inner core. Because of that, the miners were equipped with updated suits capable of sustaining the immense heat of the core and the lava. The suits were metallic, covered the whole body and some parts of them even have a little bit of chroming on them. The monsters changed their rocky part colour scheme to black from grey and their eyes were “glowing” now. The orange vehicle parts changed to blue, to resemble the water used to fight the lava monsters. 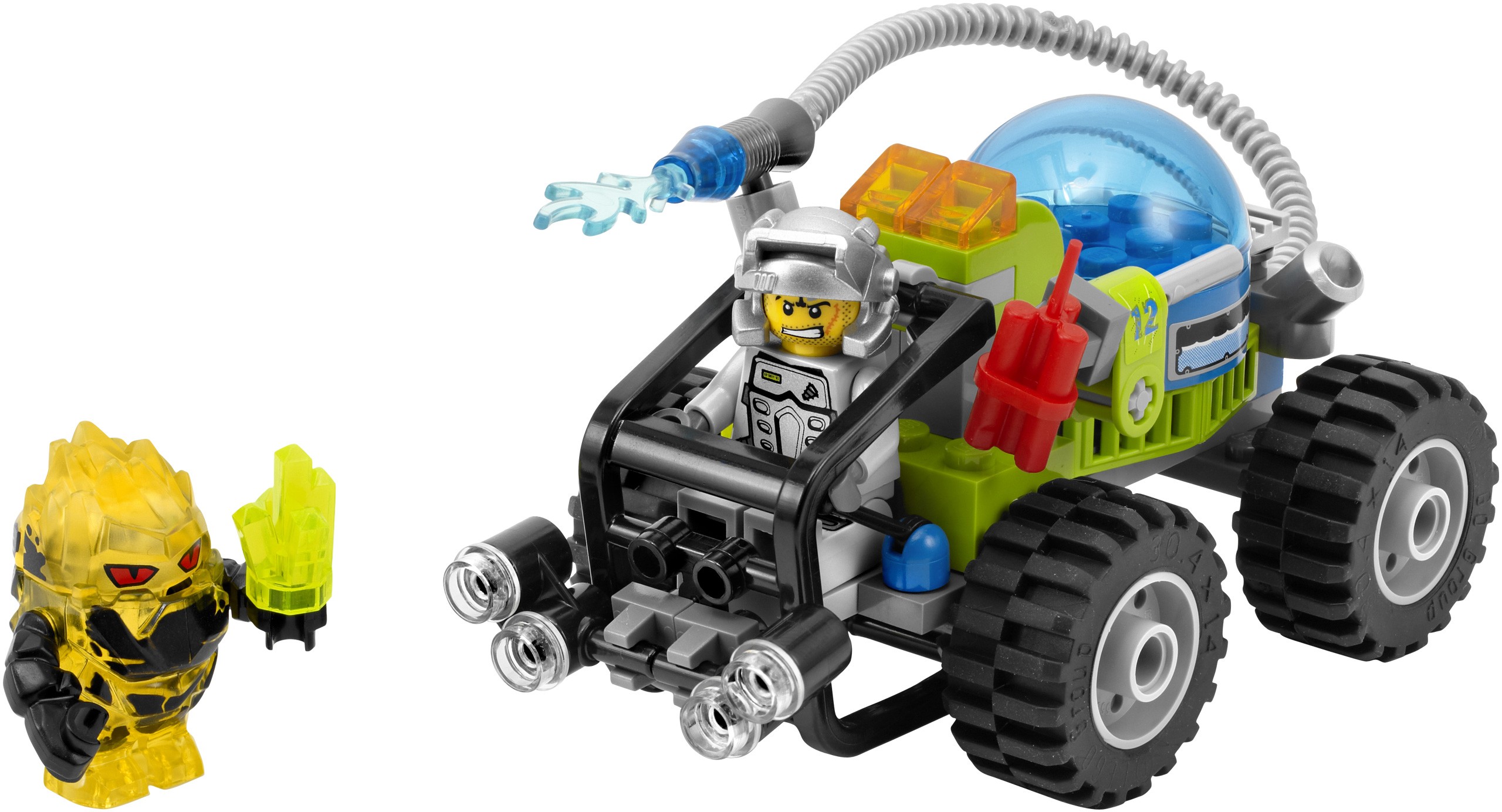 The smallest set of this wave retailed for only 10 dollars. It was a small water shooting vehicle with two mini figures: Rex and Combustix, the yellow lava monster. It had only 62 pieces. 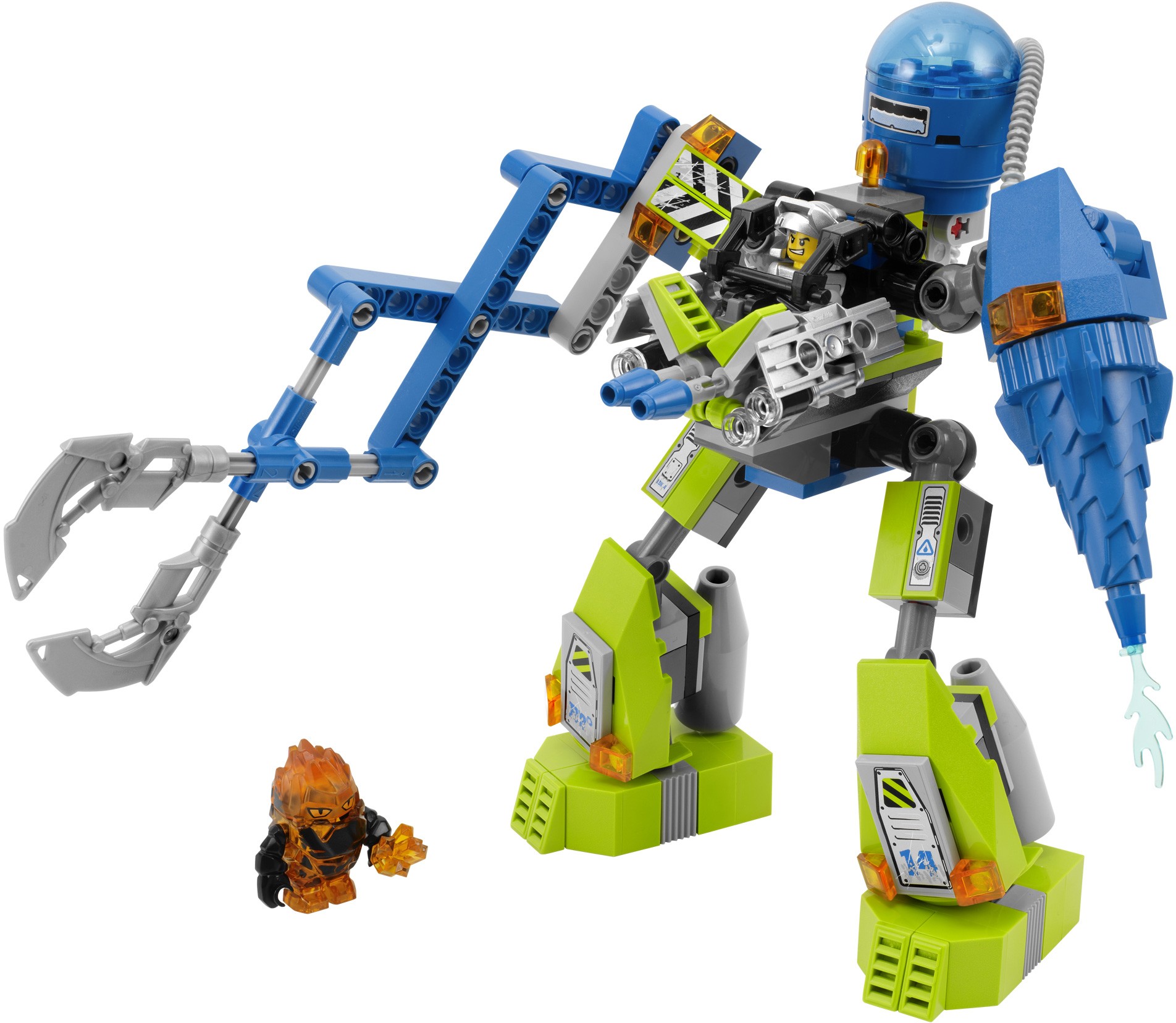 This set slightly resembled the last year’s Mine Mech, it changed the colour scheme and instead of the mining wheel it got a water shooting drill, sounds pretty weird, doesn’t it? It costed 20 dollars back then, had 183 pieces and came with two minifigures: Rex and the orange monster Firax. 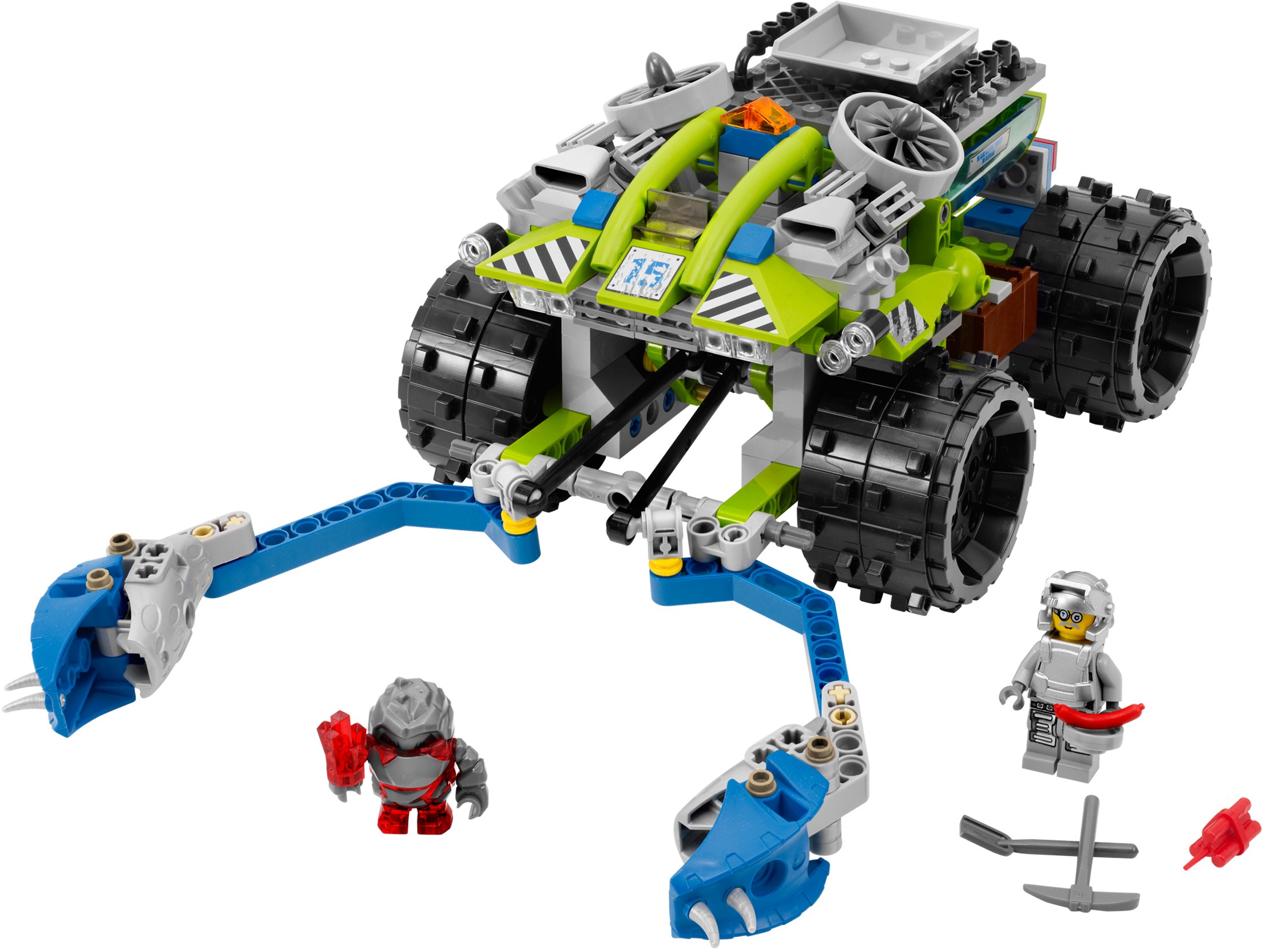 As the name suggests, this vehicle used a pair of giant claws in the front to catch the monsters. It had 259 pieces and came with two minifigures: Brains and the red monster Inferox. Please note: The monster shown in the picture above is not accurate, but it is the official image. 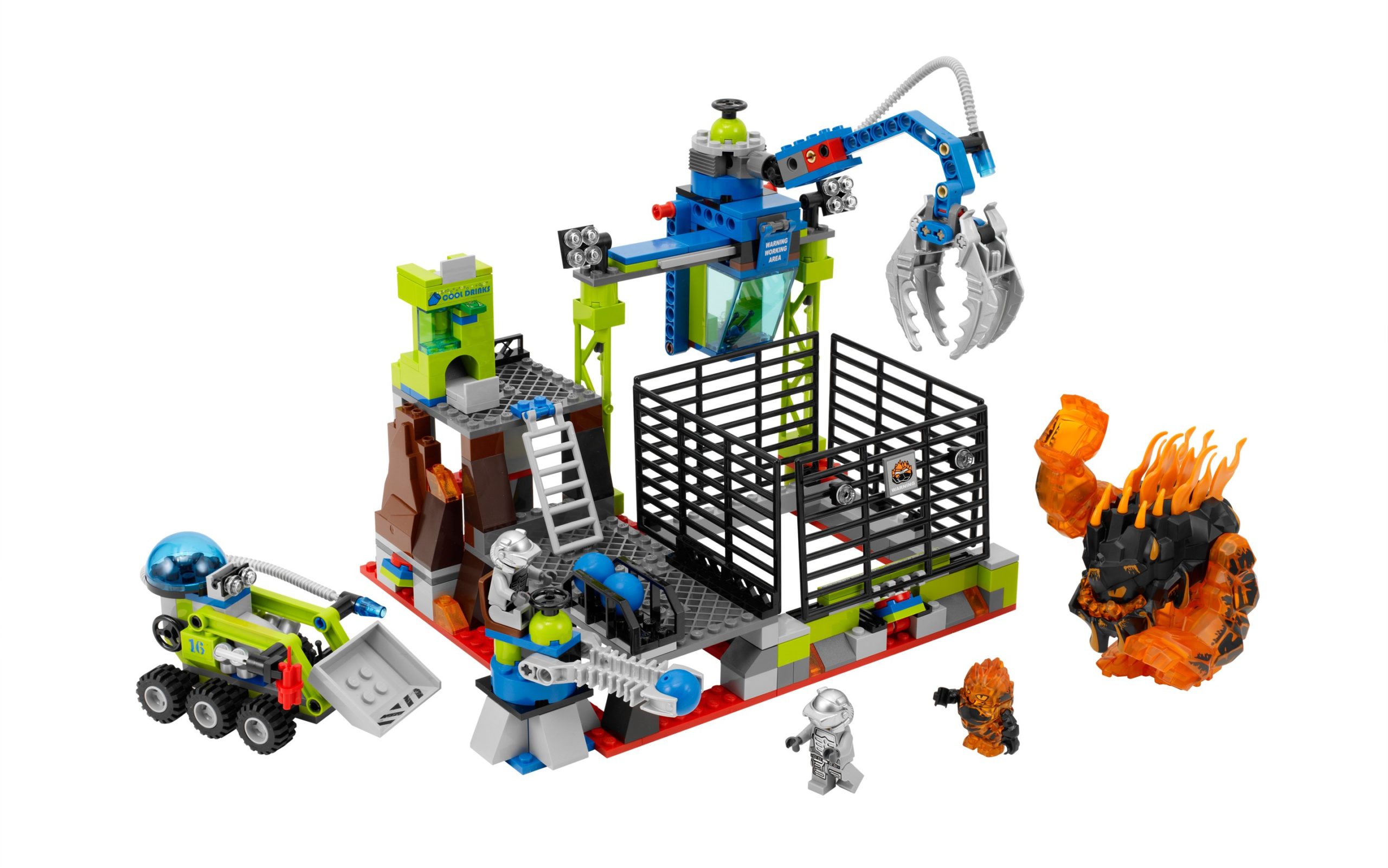 With the name referring to the famous Alcatraz prison in San Francisco Bay, it was used as a prison for the large throwing monster. It also came with a small vehicle and included a fully operational Soda dispenser. It costed 50 dollars, was built from 381 pieces and included four minifigures: Doc., Duke, the large throwing monster Eruptorr and the small orange lava monster Firax.

Throughout the run of the series, LEGO has released several promotional polybags, keychains and even a watch. They’ve also sold 3 in 1 value packs.

In conclusion, Power Miners line was quite a good idea from LEGO and it was executed rather nicely. I own few of the smaller sets and they still hold up even after a decade. But it’s a pity that the line was canceled before it could finish it story. If you ever get chance to buy some Power Miners sets, definitely do so, it will be something new in your collection and maybe you will discover your new favourite theme!