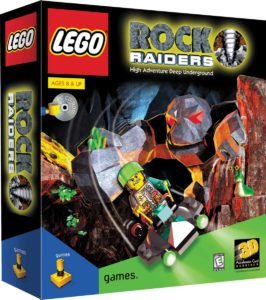 The LEGO Rock Raiders theme came to the scene in 1998. Short lived, LEGO discontinued it in 2000. Rock Raiders left a big impact due mostly to related story books, comics and a video game, and perhaps mostly the game! LEGO Rock Raiders included 16 sets, most of which related to playing the video game in some way. The sets featured an assorted array of new, unseen LEGO parts and colours. Not to mention, the theme introduced LEGO fans to an assortment of wonderfully unique characters. Most of the Rock Raiders action took place underground, which again LEGO had never done before. You could say the Raiders explored uncharted territory!

I was lucky enough to pick up most of the main sets when they first came out. LEGO advertised Rock Raiders poorly, and the game came out after the sets were released. Unsure as to exactly why they did this, I found out later it was a distribution issue. I did know LEGO included a little comic book in the first 8 sets released that explained how the vehicles functioned and a little history of the characters who operated each bit of raiding machinery.

The story involved the crew of a large ship called Explorer which suffered damage after wandering into an asteroid field. Sucked into a wormhole; it exits in an alien galaxy. The captain orders the ship to use its remaining power and head for the nearest planet. The planet they discover has a vast amount of mysterious energy crystals. While the Rock Raiders are repairing the ship, they must explore inside the dangerous caves of the planet to collect the energy crystals. Once collected, the crystals can power the ship to get them home. Sounds simple right? Wrong! 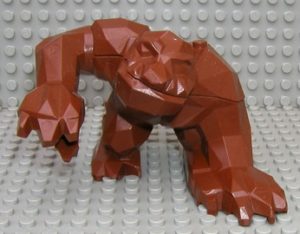 Rock Monsters (a first and only appearance), basically a large brown rock-like creature with moveable arm terrorized the crew. Each monster’s hand could even hold a minifigure if placed just right. The monsters had a smiley face, which was a bit unsettling. Apart from that, they were a pretty good effort on LEGO’s part. Other monsters in the video game included: the Ice monster, Lava monster, slugs, bats and spiders. Oh! And let’s not forget the rock whales & scorpions! While we may have received the spiders and bats, the other monsters did not appear in the sets.

Perhaps if the sets had sold better, we might have seen the other monsters in future sets, but as it stands, none of these where released into production. I think this was a shame as this would have  opened up a whole new world for these characters to explore.

The Raiders themselves were a well thought out bunch. They all had a life on their own, especially when playing the game. First was the Chief, who sadly was never offered in any of the sets. However, the Chief arrived in a 3-pack series the following year, along with a special base plate. Axle was the main Driver; Bandit was a Sailor; Docs was the resident Geologist; Jet was the ship’s Pilot; and last, but not least, Sparks was the crew’s Electrician. With this motley crew, the LEGO builder or video game player could explore the caves in various vehicles and get up to all sorts of fun trouble!

Rocky Sets, and a Game! 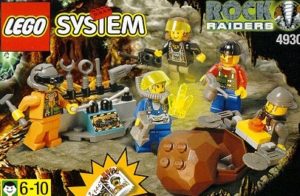 The Rock Raiders sets, although well detailed, did not include a single a sticker! Please take note LEGO! The lack of stickers not only made them more interesting, but also offered more playability and less chance of something happening to the stickers. The vehicles included various features for digging, drilling, lifting, and loading. The rugged construction meant they could take a beating.

I must admit, the first time I saw these as sets, I was curious. I bought the game, and only after playing the game did the story made sense. The beginning of the game demonstrated how the Raiders came to be on the planet, and what the actual pieces were for (example: the teleports. Very useful in a game, but looked silly in the LEGO set without knowing what they were for). The Rock Raiders game was released for Microsoft Windows PC in 1999 and then later for the Sony PlayStation. The game holds up well, and at the time grew quite a following. 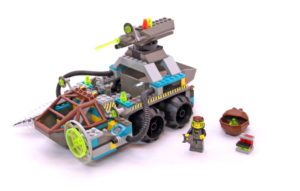 LEGO Rock Raiders, though short-lived, had more heart than most when it came to stories that could be turned into sets. The theme expanded more the deeper you got into the game. Unfortunately, while the expansion opportunities were never fully explored, a sequel in 2009 called Power Miners contained some of those features.

It must be said that the Power Miners did not do so very successfully. From the start, the sequel theme always reminded me of  the film Aliens and for the life of me I could not understand why LEGO, given the thought they put into this original Rock Raiders theme, didn’t use the existing material.

It was all there, and if managed right, could have proven itself and would have survived at least a few more years. Instead they chose to have it re-hashed into the Power Miners. A few years later LEGO tried to release yet another mining theme, called City Mining. I am not sure how that went, as by that stage I had lost interest.

Rock Raiders was never a theme that should have been taken lightly. I believe it had a lot going for it and from the customs I’ve seen, there are plenty who agree with me. If LEGO would re-release it under a new theme, I would think the answer already given is don’t! Re-release the original RockRaiders and include all the features and characters from the game! Include part of the main ship, the caverns, the Lava and Ice monsters, and include a little movie or comic. Then LEGO might be on to something again!