Every now and again, LEGO decides to come up with a theme based on a cartoon, one which usually stands head and shoulders above the rest. LEGO has produced, for example: SpongeBob, Ninja Turtles, and The Simpsons (to name a few), but my all time favourite has to be LEGO Scooby-Doo. Back in the Spring of 2015, September I believe, I first started seeing these sets appear. Now correct me if I’m wrong, but I think there were five main sets with one small poly bag in the entire theme. This wasn’t a lot by any means, but for anyone who had watched the cartoon, it was a godsend!

The sets went as follows: 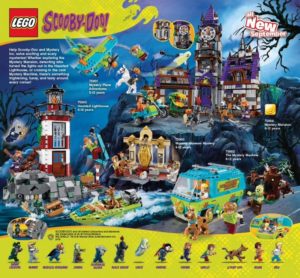 As for the LEGO Scooby-Doo characters, LEGO did an excellent representation of the cartoon figures, all except “Shaggy’s” hair-do, which I thought needed to be more spiky or something. While the main figures were excellent in themselves, to collect all of them (five in total) you needed to buy two of the bigger sets, which at the time weren’t cheap and were very hard to come by.

The Villains, too, get a mention. Most notable is the Black Knight. He came in the Mystery Mansion set. Other villains included the Ghost Sea Captain, the Ghost, the Headless Horseman, Vampire, Mummy, and Sea Monster. (And also a Man-eating-Plant-Robot?) 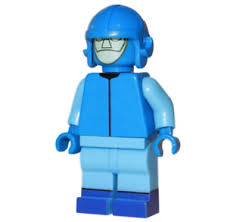 Speaking of the villains, they all had two faces. One, which was the monster face, and the other of the person behind it. Though LEGO didn’t think to supply their alternative character parts, which would have explained the story better. The story went astray and may not have done so if maybe there was a comic included, possibly attached to the manual. Notable absentee villains include the Ghost Clown, the glowing Deep Sea Diver and Charlie the Robot. [See custom version]. These would have no doubt been excellent add-ons to this theme, had they been made. Maybe there’s hope yet that Minifigures.com might take them up?

As far as all the sets go, they introduced some new LEGO bricks into the range, mostly the pumpkin head, the hamburger bun plate (Scooby snack?) and lots of purple bricks!

In reviewing the LEGO Scooby-Doo sets, the Mummy Museum set was pretty small and uneventful. One play feature should have been built better: as the hamburger was pulled, the sarcophagus opened. This was the only good thing, however, this action should have been around the front of the set and not the back. Any kid knows that! The Mystery Plane set, I’m pretty sure was in reference to one of the episodes (though I have never seen it myself, I do remember something of it). The set was not much to play with, apart from the Headless Horseman, who was an excellent addition. 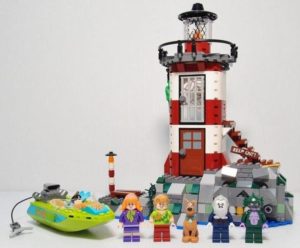 After this came the Haunted Lighthouse. While the set was not great, it did have some nice parts. It did introduce Daphne to the line up, as well as some decent villains. Speaking of the villains, how is it in this set you had a Sea Monster and Ghost Captain, but the glowing Deep-sea Diver couldn’t have been added by LEGO? After all, he had been already made in the minifigure series like the Sea Monster. It wouldn’t have taken a genius to figure out adding him to the set would have improved it. Also missing was a ship-wreck; it’s in the one of the episodes! [again: details, LEGO!] Still, as a set, it was passable.

Next comes my favourite! 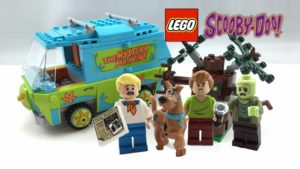 It had to be the Mystery Machine (van). This is a must have, if you’re a fan of the show. The Mystery Machine was an icon and although it was smaller than it should have been, and loaded to the hilt with stickers, it looked the part! The van opened up to reveal lots of interesting things inside. Though you were limited to just Fred (Nice-Ascott!), Shaggy, and Scooby, it also introduced the Zombie & something like a Scary Robot Tree! [nice touch that.] The Mystery Machine set was the best one of the lot in terms of value for money. My daughter played with this so much I had to buy another one as the stickers started peeling off. [darn stickers!]

The most expensive set in this theme, the LEGO Scooby-Doo Mystery Mansion was disappointing. As such, it should have been good, really good, with traps and dangers galore. Instead it was treated as a rush job! There were no secret passages, no moving bookshelves, and what was the deal with the big oversized ball thing in the hall?? This small set looked big. However, actual play features were very limited. It had such potential and to leave it like that was a disservice to the cartoon. Honestly, I could go on here, but, as a set, it was passable at best. 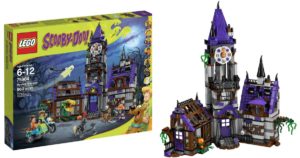 Just for the record, I bought two of them to see if I could make things right, and let’s just say,  it’s an ongoing project.

In retrospect, I think LEGO pulled the plug on LEGO Scooby-Doo too early. LEGO had plenty of material to work with, and today with newer versions of the cartoon around, it may be not as popular as the older version, but perhaps enough to have kids interested in buying these sets again. Apart from the small LEGO movies appearing before the sets released, most movies based on this theme arrived after the LEGO sets had long vanished.

In 2016, a movie was based on these characters called Haunted Hollywood. A sequel, called Blow-out Beach Bash, followed shortly after in 2017 because kids received it so well. A  young audience were, of course, the aim of the films. If you ever built the sets you’d know when they appeared in the movie. It was interesting to see that the movie side of things did well, even if LEGO had lost interest.

Another interesting fact was talking to people about the LEGO Scooby-Doo sets. It surprised me to learn that the rumours said that the sets did not sell well. The truth be told, not enough sets were there to go around! When I got mine, the sets sold out immediately. And replacements never arrived. A few friends who worked in a toy shop at the time confirmed this. LEGO Scooby-Doo was a hot product and come Christmas, you could not find them anywhere! Most sets were snapped up, only to be resold for higher prices on eBay. This is not uncommon with one-off themes, once it turns out that it takes off. That is when people lose interest. Please take note, LEGO! If you’d like to check out how high these sets go for, you’ll see what I mean. 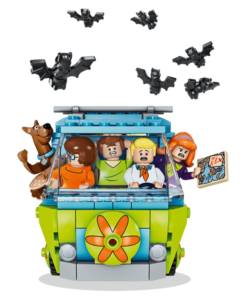 I think if LEGO do decide to release these again, it should be on a much wider scale. Make more sets and try and include most of the villains from the older cartoon. As from what I loved about Scooby Doo, it beats the current LEGO effort “Hidden Side” hands down! I plan to cannibalise these into my LEGO Scooby-Doo sets. Add the Monster Fighter sets, too, as they were a much better effort; but nothing beats the original!

So when I say “LEGO Scooby-Doo, where are you?” I’m really asking LEGO to hurry up and make these again.

What is Base Ace: A Compatible Product Review