2020 is the dawn of a new galaxy. Star Wars: The Rise of Skywalker and Star Wars: The Clone Wars are now behind us, and though we probably have more sets based on them yet to come, they wrapped up the stories of the characters we’ve come to love. Whatever Star Wars stories Disney creates next, whether it’s in The Mandalorian or the rumoured Doctor Aphra series, they will truly be stories of their own. But what about the world of Star Wars before Disney? Did you know that prior to Disney buying Lucasfilm in 2012, there was a whole universe of other books, comics, games and RPGs in a continuity that’s now called “Star Wars Legends”? And did you know LEGO even made sets based on this material? Join me as we jump into a Sarlacc Pit of forgotten sets from a world that once was.

Starkiller and the Force Unleashed 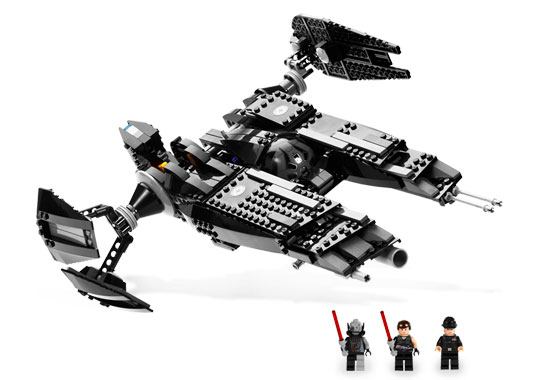 If you’ve seen Star Wars: The Force Awakens, then the name Starkiller is familiar to you. The First Order hollowed out a planet like a pumpkin and turned into a big red death laser that totally wasn’t a new Death Star. The name “Starkiller” actually comes from early drafts of the original Star Wars: A New Hope, where Luke Skywalker was called Anakin Starkiller, and it’s not the first time Lucasfilm have used the name elsewhere either.

In 2008, Lucasarts released Star Wars: The Force Unleashed, a game that is still one of the most captivating stories in a galaxy far, far away. At the dawn of the Empire, Darth Vader found the infant child of a fugitivie Jedi and raised him as his own secret apprentice, in the hopes of one day using him to destory the Emperor. The game follows the apprentice, named Starkiller, as a young adult, trying to find his place in the galaxy and break free of the shackles of Vader’s manipulations. 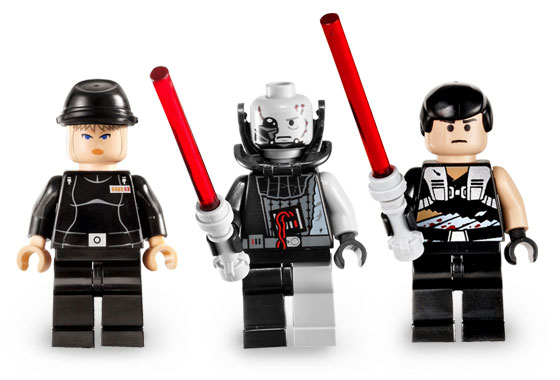 LEGO released a set to tie in with the game, 7672 Rogue Shadow, the ship that Starkiller and his pilot-slash-lover Juno Eclipse travel the galaxy in, first as Jedi hunters, and later as would-be-rebels. It’s an odd, blocky ship, slightly reminiscent of an old Jedi starfighter but with the round canopy of a TIE Fighter sandwiched in the middle. The asymmetrical sides of the build tie nicely into its description as an experimental stealth fighter, though perhaps don’t make for the most interesting set.

What was interesting though was the collection of minifigures. The set came with Starkiller, Juno Eclipse, and Darth Vader himself. Starkiller and Eclipse are fairly standard – nothing to write home about, especially not with Eclipse’s misshapen face design – but this version of Vader was a battle-damaged, on-the-verge-of-death Vader, helmet broken and revealing his blotchy grey skin, chest control smashed and leaking cables, and one hole arm and leg grey as if his suit has been torn clean off. While it’s meant to represent part of the game’s finale, this could just as easily be Vader at the end of a particularly hard battle, which arguably made it the most sought-after of the three minifigures.

It was great to receive a minifigure of Starkiller, a character who would later turn out to be pivotal to events in the Legends canon, and probably remains the most high profile set from that era. It’s a shame we didn’t receive more minifigures from the game – Starkiller’s alternate outfits, dark disciple Maris Brood with her tonfa lightsabers, Bail Organa, or a non-Clone Wars Shaak Ti – but I personally am grateful that we got any at all.

An Even Longer Time Ago 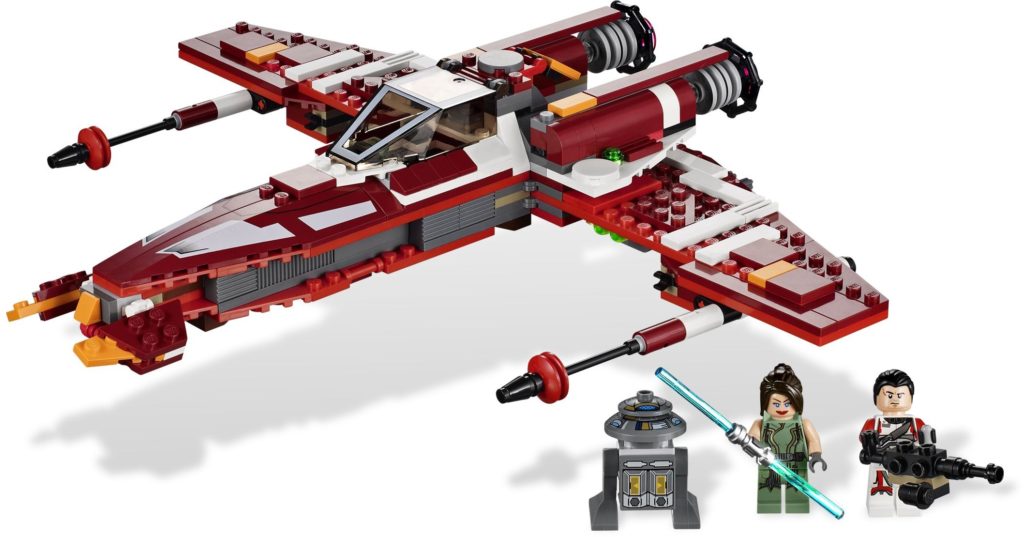 The Star Wars galaxy was always the perfect setting for a sprawling Massively Multiplayer Online Role-Playing Game (MMORPG, like World of Warcraft), so it was no surprise that 2011’s Star Wars: The Old Republic has gone on to be a success to the tune of a billion dollars. Set thousands of years before the events of Episodes 1 to 9, The Old Republic focuses on a galactic civil war between the Republic and the Sith Empire. You can choose to be a Jedi, a Sith, a bounty hunter or any of half a dozen other classes, and despite the game’s darker tone, we were fortunate enough to get five sets based on it from 2012 to 2014. 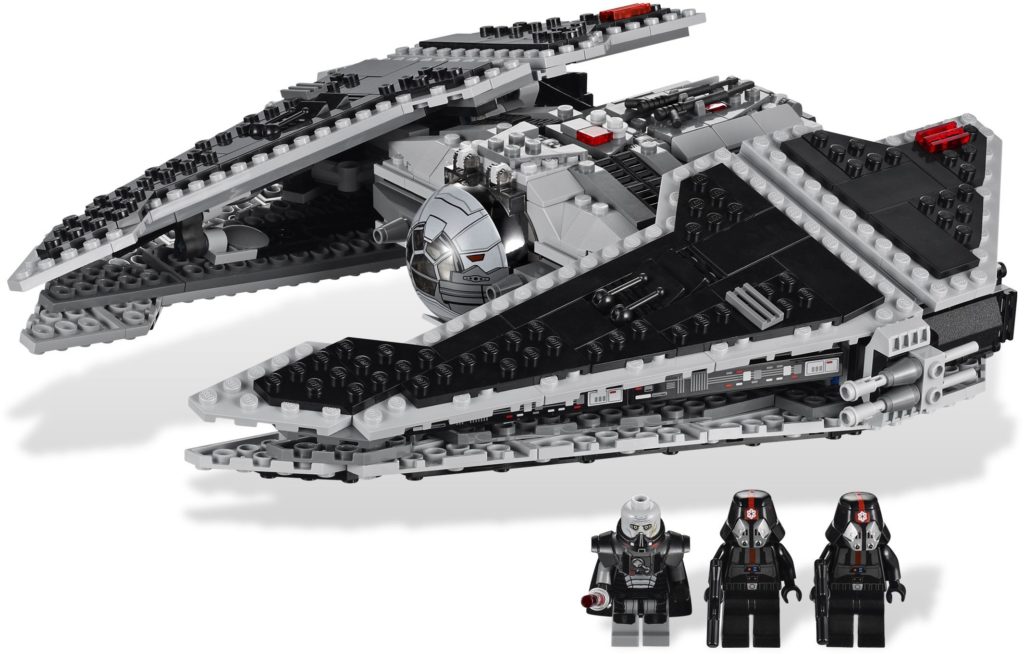 2012 was the first time we got to choose a side in this conflict: the Jedi were represented by 9497 Republic Striker-class Starfighter, and the Sith by 9500 Sith Fury-class Interceptor. These two ships were quite pricey, coming in at £39.99 and £79.99 respectively, but gave eager builders key figures from both sides of the war. 9497 featured Satele Shan, Jedi Master and Jace Malcom, Republic commando, while 9500 included the impressive Darth Malgus and two Sith Troopers. 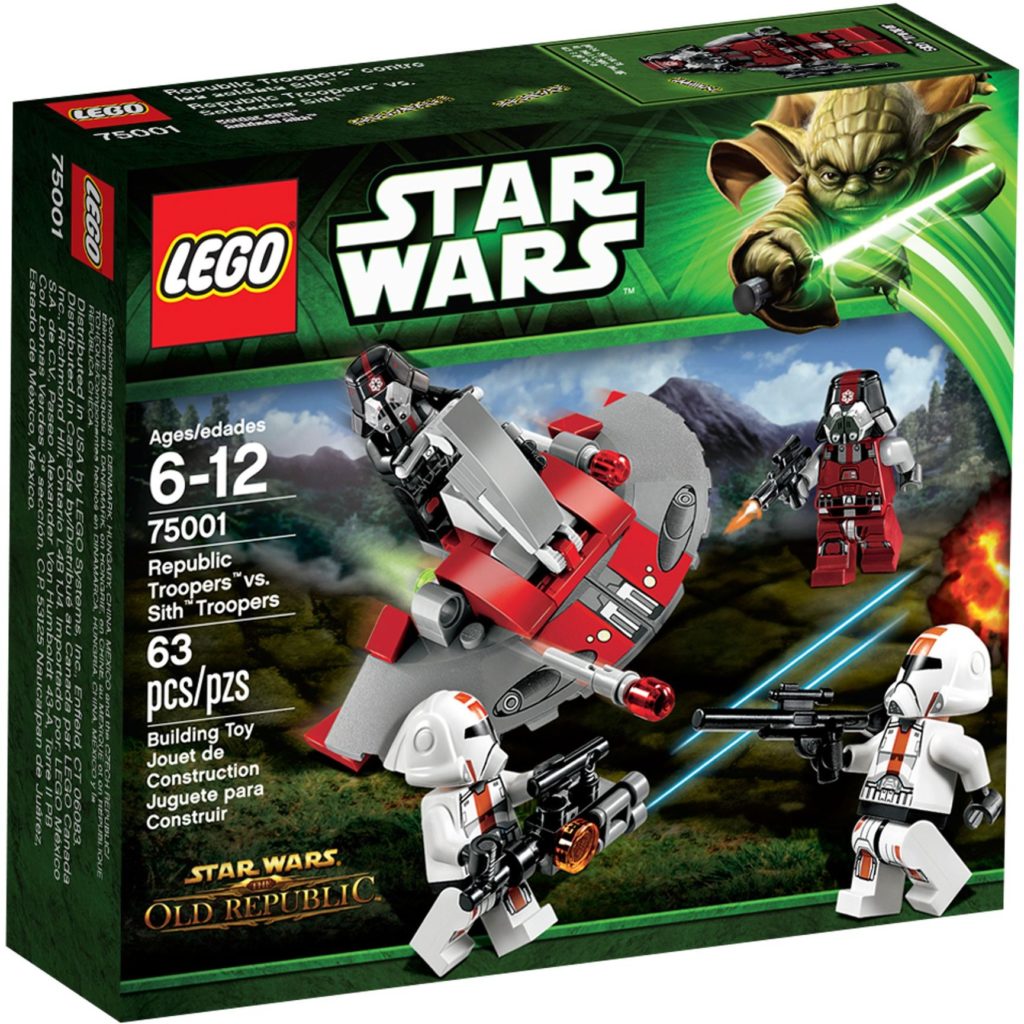 The conflict only grew in 2013 with more sets – one of them a battle pack, no less! This was back in the days when a batte pack included two figures from each side, so 75001 Republic Troopers vs Sith Troopers was exactly that, and provided a perfect supplement to the two sets from the previous year. It gave a lot of builders the chance to expand their MOCs from this era of the Star Wars universe, to flesh out a time we were only just starting to see. Also, notice how the Republic Troopers look a lot like clones? Coincidence or foreshadowing? 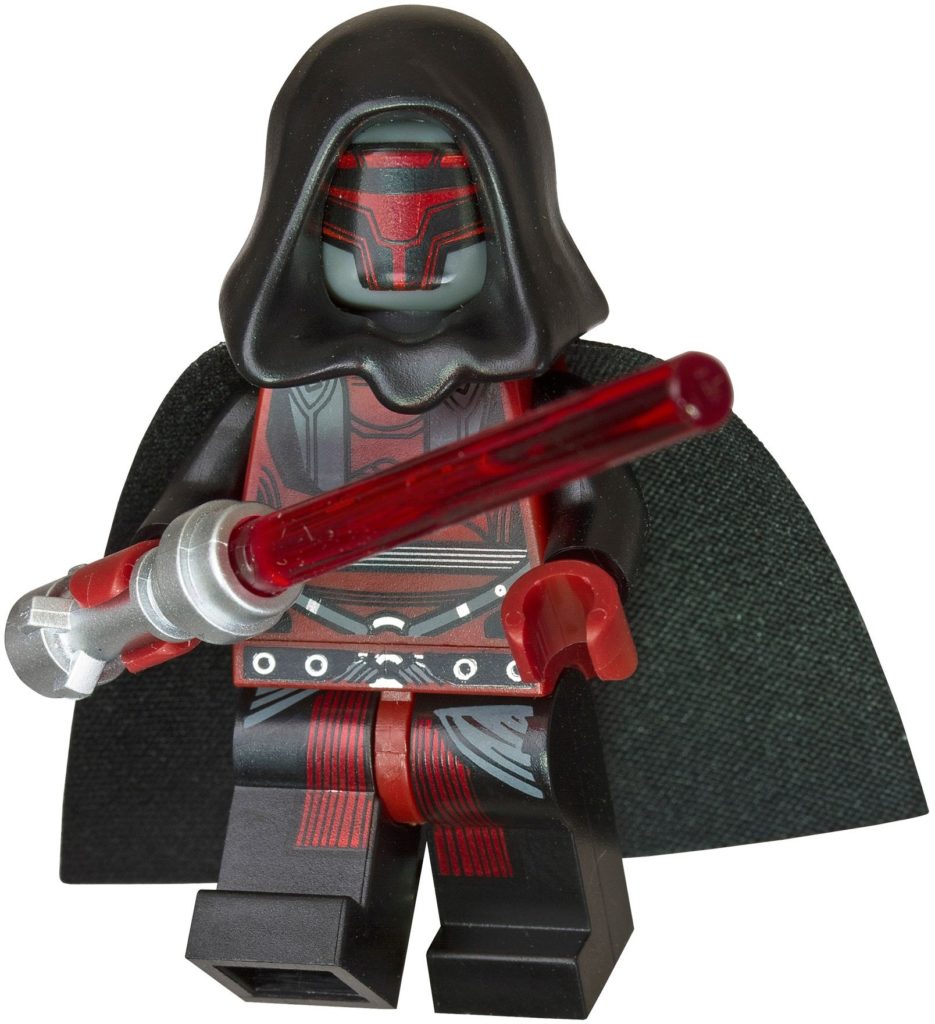 The last full set from the Old Republic era and game was 75025 Jedi Defender-class Cruiser. Reminiscent of ships from the present era of Star Wars, it was still an interesting build and shape of its own, and like the battle pack, featured characters from both sides, two of them being named characters from the books and games: Jedi Master Kao Cen Darach, Satele Shan’s former master who dies in the game’s opening cinematic, and Sith acolyte Adraas, rival of Darth Malgus. These were very welcome additions to both sides, as was the white-robed Jedi Consular minifigure, providing a white version of Luminara Unduli’s miraluka headdress.

By this point, we fans had received more Old Republic content than we thought we were ever going to get, and if this had been the end of it, I think most fans would have been satisfied. However, LEGO had one final surprise up their sleeve. 2014’s May the Fourth gift with purchase was a polybag of none of than Darth Revan, the legendary Jedi-turned-Sith-turned-Jedi who starred in Star Wars: Knights of the Old Republic and returned for the MMORPG. This is likely one of the most sought after minifigures for many Star Wars collectors, as after that May the Fourth promotion, there hasn’t been another opportunity to buy him.

Still, this was one area of Star Wars Legends that many thought LEGO would never explore, and how glad we were to be wrong! 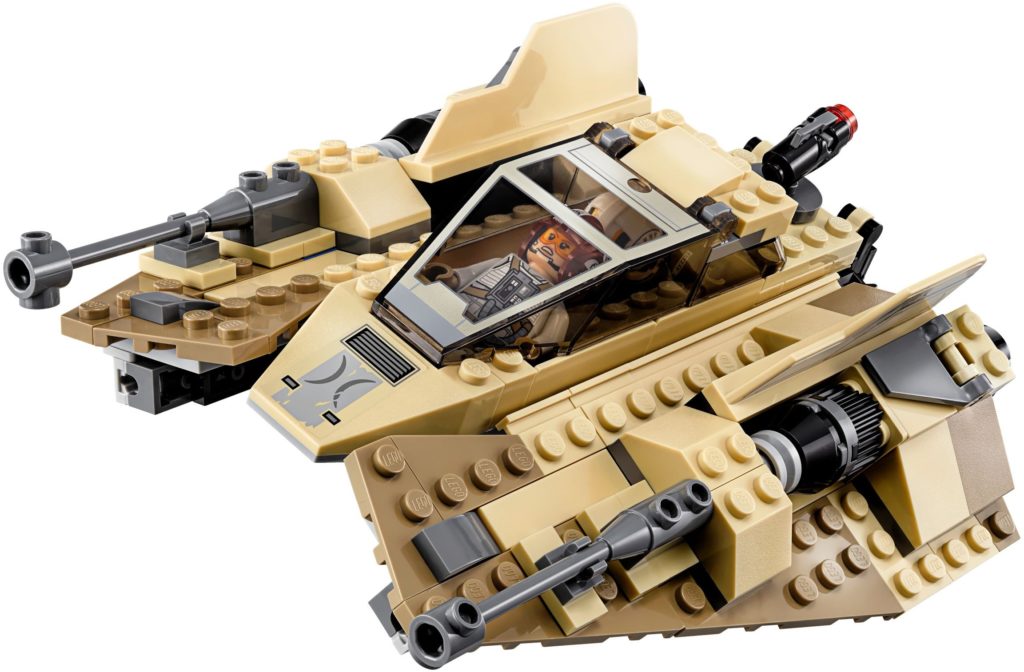 I’ll be honest, of all the Star Wars Legends sets LEGO have made, 75204 Sandspeeder is perhaps the most perplexing. Released in 2018, it is a set of a vehicle that occupies a grey area in both eras of canon. You see, the Sandspeeder – essentially a recolour of the Snowspeeders used by the Rebels on Hoth in The Empire Strikes Back – were originally set to appear in a toyline that was cancelled before it could see the light of day. It existed in limbo from 1986 until it was finally included in a card game in 1996, thus cementing it in Legends canon without having it truly “appear” in anything.

But what about Disney’s current canon? Well, the honest answer is that the Sandspeeder’s only canon appearance is in LEGO Star Wars: All-Stars! While not strictly speaking “canon”, it has resulted in the vehicle being considered part of the Rebel Alliance’s arsenal again. What this doesn’t answer is why LEGO decided to make this most obscure of vehicles as a set, but if the answer is as simple as “because it was there”, I’m not going to complain.

Yes, we’ve had Snowspeeders aplenty and this is mostly just a recolour, but 75204 Sandspeeder comes with two great minifigures, a vaporator, and a bunch of fun play features, plus it’s just different enough to get my imagination going. In fact, I even made a whole animation after reading the sourcebook that the vehicle appeared in, which I wouldn’t have read without first seeing this set!

Now, it would be completely remiss of me to not at least mention that FireStar Toys have made customs of several key Star Wars Legends characters. I’m not going to mention that though; I’m going to into great length about it!

One of the great losses that comes from Legends essentially being discontinued is that Han, Luke and Leia originally went on to have families and whole lives after Return of the Jedi, including Han and Leia’s only daughter Jaina Solo. An ace pilot and powerful knight in her own right (a prophecy even calls her the “Sword of the Jedi”) this custom shows her as both; bedecked in flight gear with a pistol in one hand, and an iconic purple lightsaber in the other. 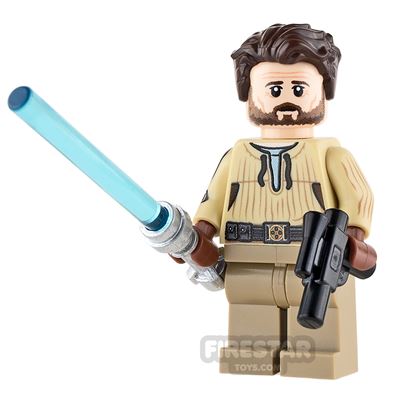 She’s not the only member of the Solo-Skywalker family to get the FireStar treatment. In Legends, Luke went on to marry his onetime enemy, former Emperor’s Hand Mara Jade. A skilled spy and assassin, Mara Jade also became instrumental in the New Jedi Order, and she and Luke had a son they named Ben. This minifigure depicts her as she appears in the comics with bright red hair, a balaclava around her neck presumably to shield her from the sands of Tatooine (she was just miles away from Jabba’s sail barge when Luke and friends destroyed it!) and her purple lightsaber drawn. Lot of purple lightsabers in Star Wars Legends, huh?

Our final notable mention from Legends is Kyle Katarn, another Jedi Master and key figure in the New Jedi Order. Kyle’s story is in some ways similar to Luke’s. In the game Jedi Knight: Dark Forces II from 1997 (a game which features live-action cutscenes, making it feel like a lost Star Wars movie), Kyle discovers that his father was a Jedi, and takes up his lightsaber against the Imperial inquisitor Jerec, a Sith who seeks to wield unimaginable power. Kyle later helps Luke rebuild the order, and becomes a central figure in the Star Wars Legends universe.

While no new Star Wars Legends books or games are being made, many pre-existing ones are still being published as reprints or rereleases, so if you want to delve into this whole other Star Wars universe, I would highly recommend jumping in. There are so many amazing stories to choose from, and I’m so glad that LEGO were able to make sets of a handful of them.

With that said, Disney’s new canon has also produced some amazing stories, and we’re starting to see them filter into LEGO’s sets too. Here’s hoping that LEGO continue this trend of looking beyond just the movies and TV shows and carry on making Star Wars the best theme it can be!