It’s awesome to be a Star Wars fan. In the latest Disney investor call, Lucasfilm President Kathleen Kennedy announced a slew of new stories set in a galaxy far far away. Perhaps the most exciting news though was the reveal of a Rogue Squadron movie to be directed by Wonder Woman director Patty Jenkins. To celebrate the announcement, I thought I’d take a comprehensive look at the pilots of the rebellion. In this first article I will discuss all the parts, pieces and minifigures you need to create your own LEGO Red Squadron. 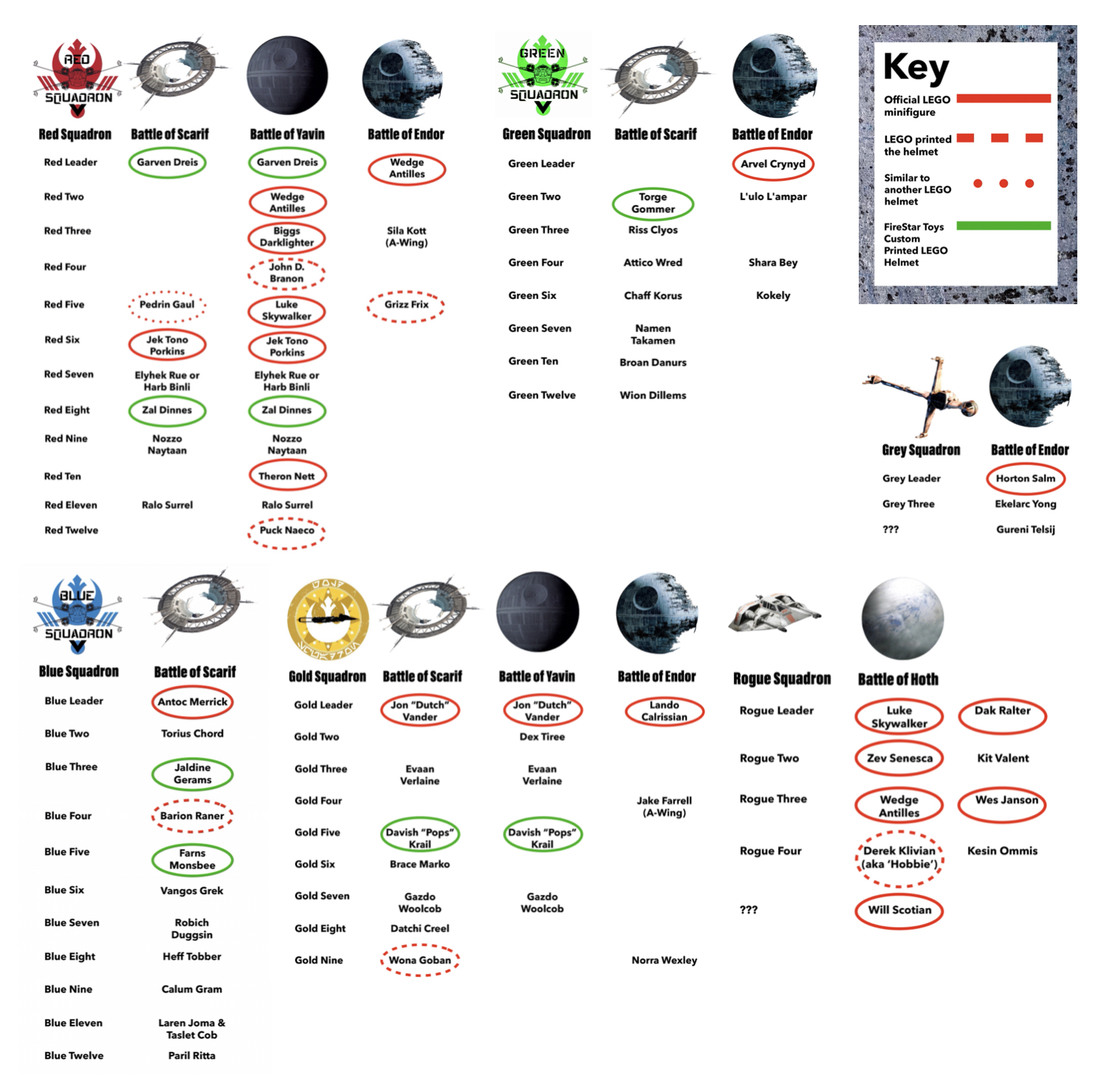 There’s a lot of different pilots in Star Wars. In Rogue One and the Original Trilogy, seven different rebel alliance squadrons are featured. The Squadrons also gain and lose pilots between the films. Before I began writing this article, I spent a day compiling lists of all the different rebel squadrons and their pilots. The graphic above charts all the rebel alliance squadrons that are featured in the movies. Pilots circled in Red have official LEGO minifigures. Pilots circled in red dotted lines can easily be recreated with existing LEGO parts and pilots circled green can be recreated using FST custom printed helmet pieces. Because there are so many different pilots, this article will talk about how to make LEGO minifigures of the pilots in Red Squadron. 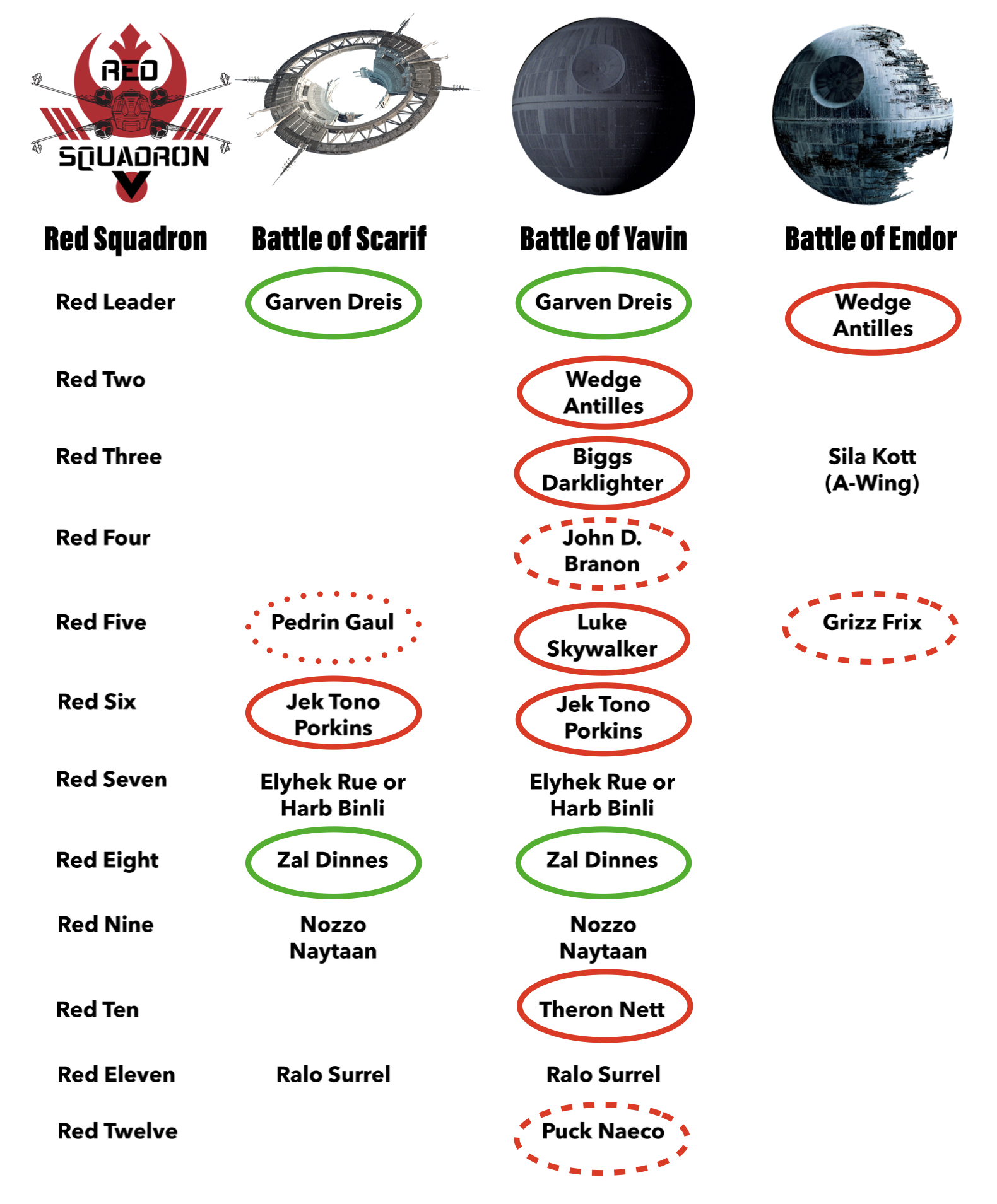 Red Squadron was first featured in A New Hope. The Squadron participated in the battle of Scarif, the battle of Yavin and the the battle of Endor. Despite being the most prominent rebel squadron, LEGO has produced five official Red Squadron minifigures. Fortunately, this guide provides instructions for how to create the remaining members of Red Squadron.

To create your own Pedrin Gaul minifigure you will need: 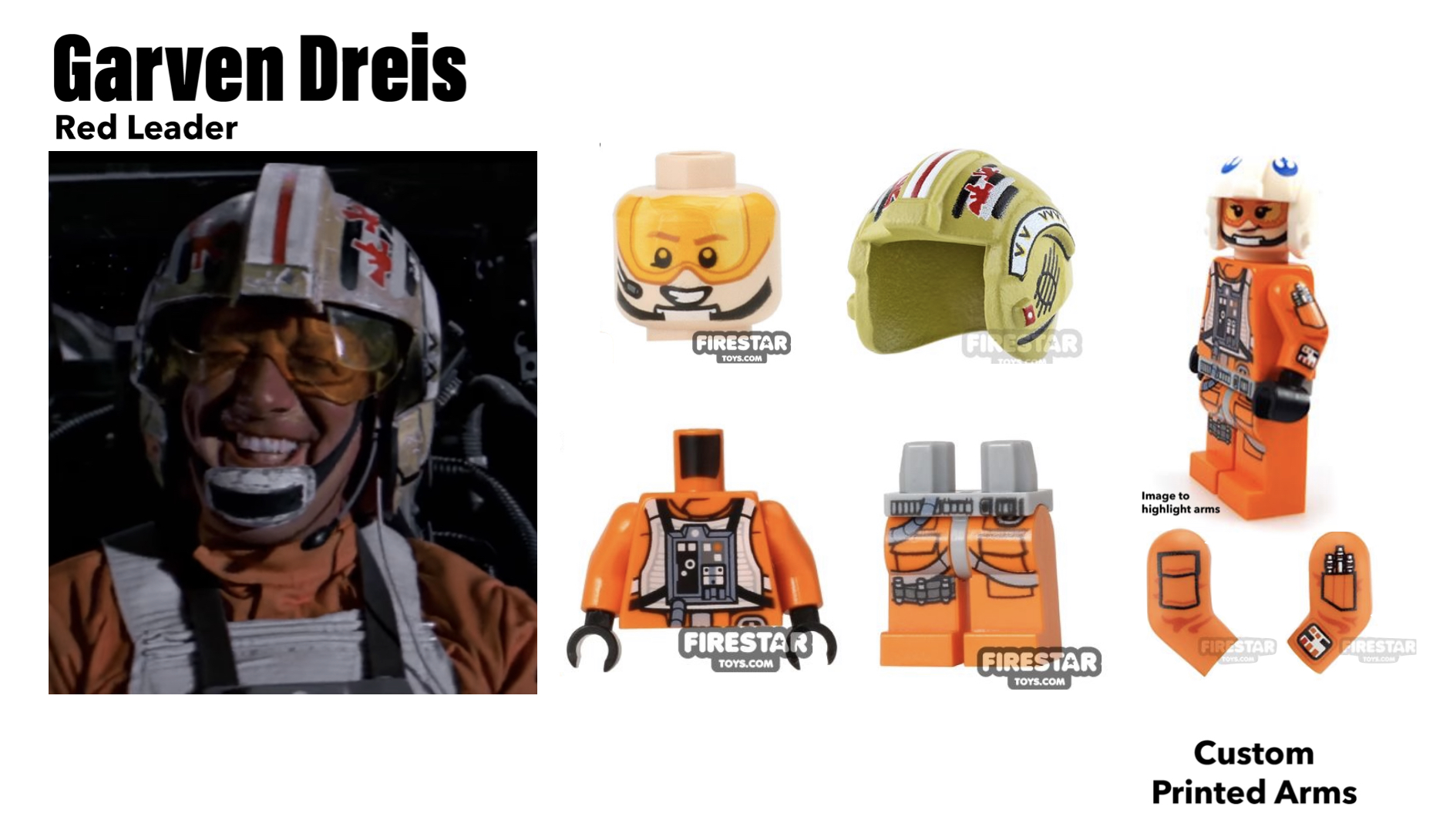 To create your own Garven Dreis minifigure you will need: 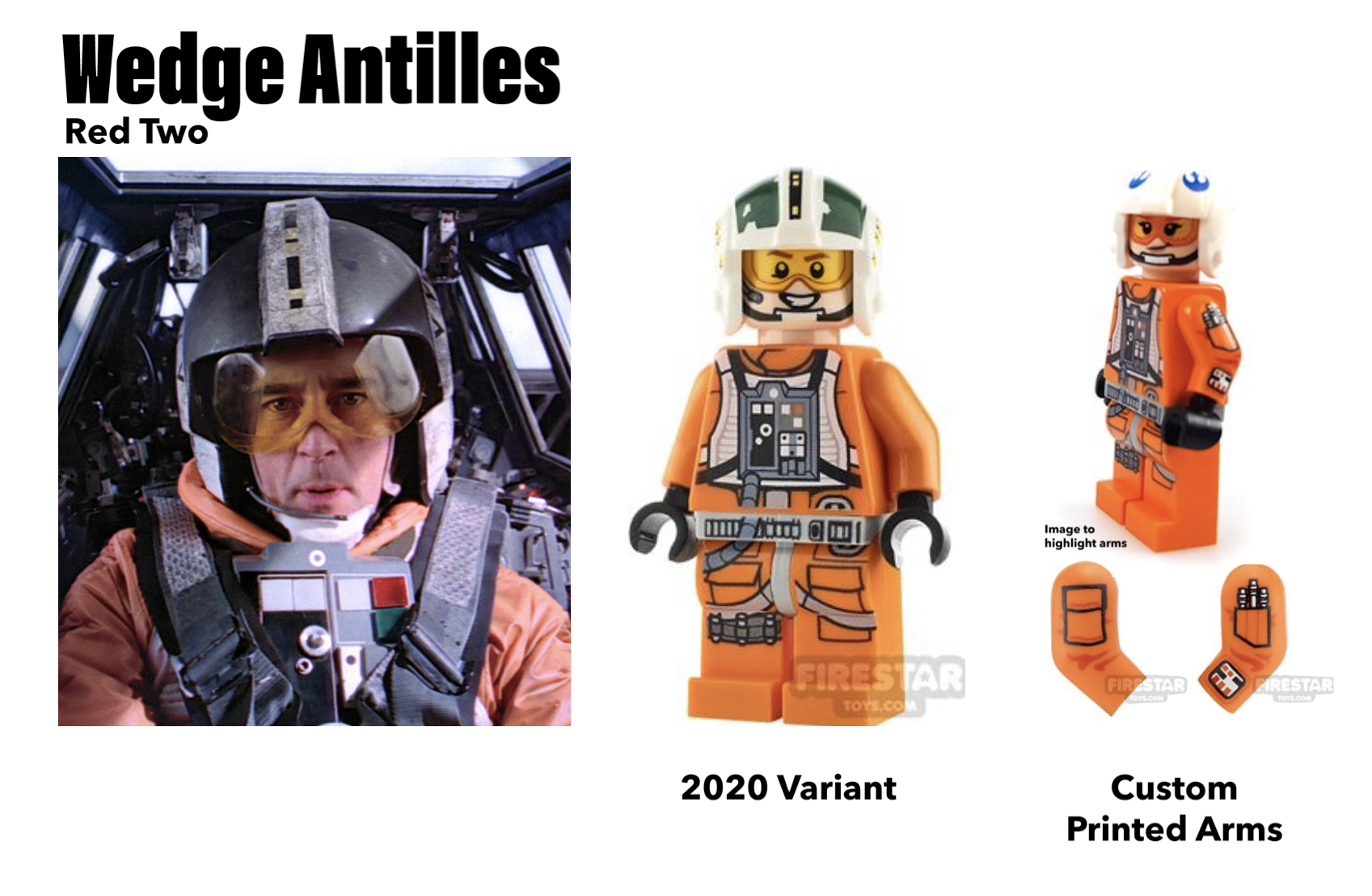 You can purchase your own Wedge Antilles minifigure below: 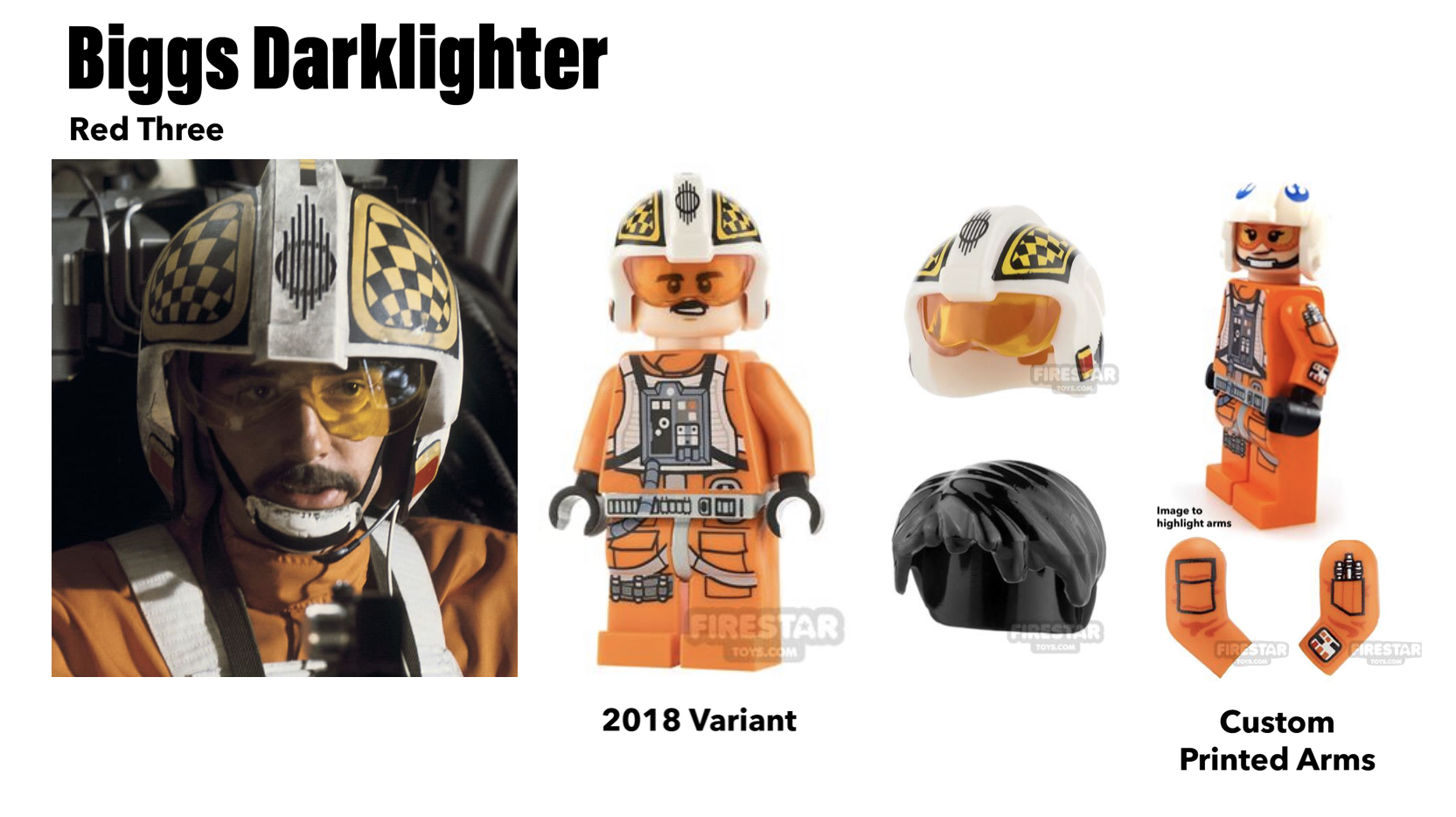 Biggs Darklighter served under the call sign Red Three during the battle of Yavin. As well as sporting the galaxy’s greatest moustache, Biggs was raised on Tatooine and was a close friend of Luke Skywalker. Sadly Biggs gave his life trying to destroy the Empire’s lethal super weapon, the Death Star. LEGO first produced a Biggs Darklighter minifigure in 1999. 19 years later, they released a new version of the minifigure in set 75218, X-Wing Starfighter.

You can purchase your own Biggs Darklighter minifigure below:

To create your own John D. Branon minifigure you will need: 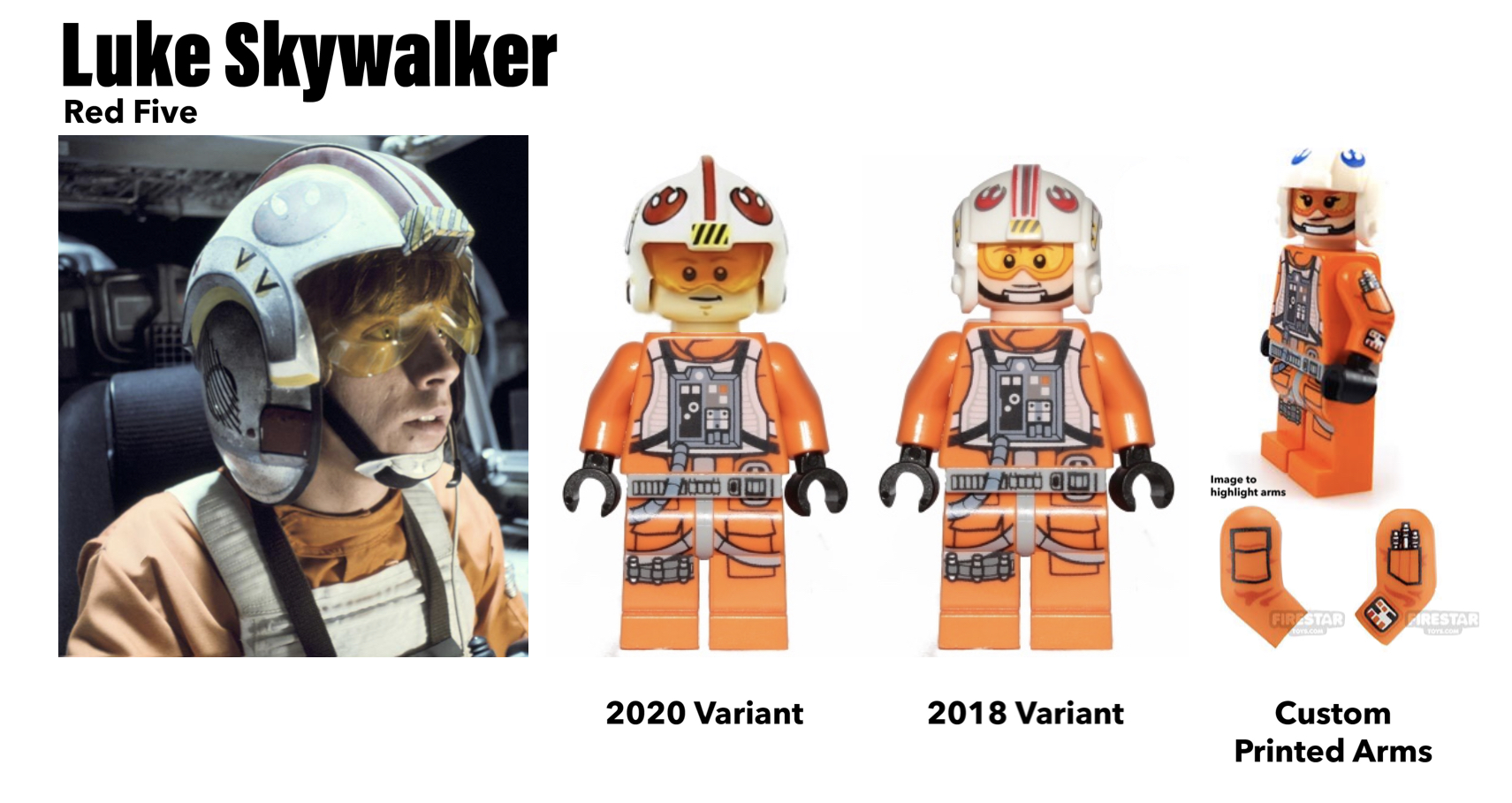 If you’re reading this article I shouldn’t need to describe Luke Skywalker. After Perdrin Gaul was a killed in the battle of Scarif, Luke adopted his former callsign, Red Five. During the battle of Yavin, Luke fired the torpedo that blew up the Death Star. Like Biggs Darklighter, Luke is one of only two X-Wing pilots to receive a dual moulded helmet. Although the new helmet was more detailed, many fans complained the piece was grossly oversized. LEGO appears to have taken the criticism onboard as they’ve reverted back to the classic X-Wing helmet in the 2020 X-Wing (Set 75301).

You can purchase your own Luke Skywalker minifigure below: 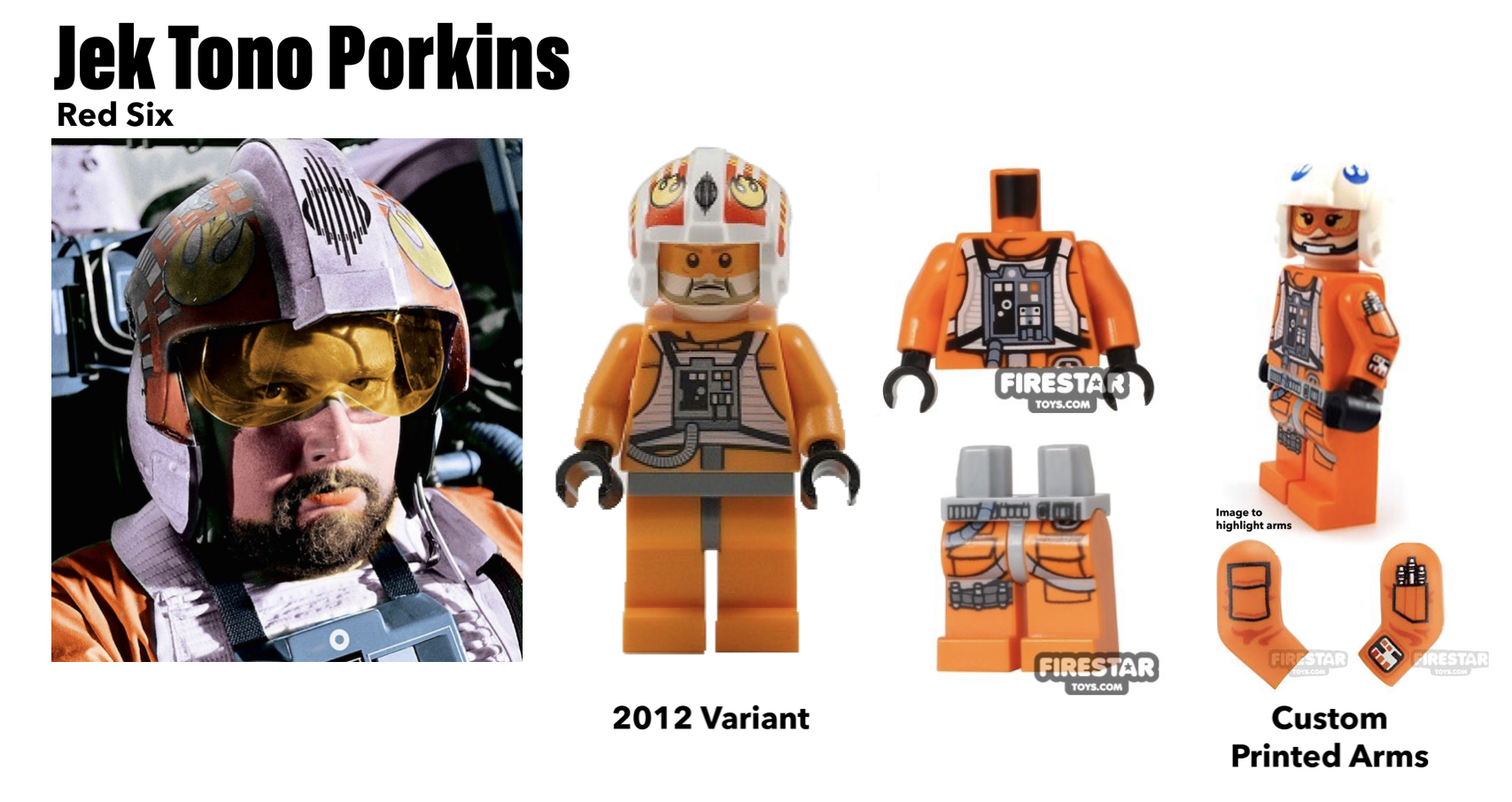 Jek Tono Porkins flew as Red Six in both the battle of Scarif and the battle of Yavin. Tragically, Jek Porkins X-Wing fighter was shot down as he attempted an attack run in the Death Star trench.  Despite being an iconic Star Wars character, Porkins has only appeared in one LEGO Star Wars. In 2012 LEGO released a Jek Porkins minifigure alongside his astromech R5-D8 in set 9493 X-wing Starfighter. I think the character is due an update as his face print has grown a little dated.

You can purchase your own Jek Porkins minifigure below: 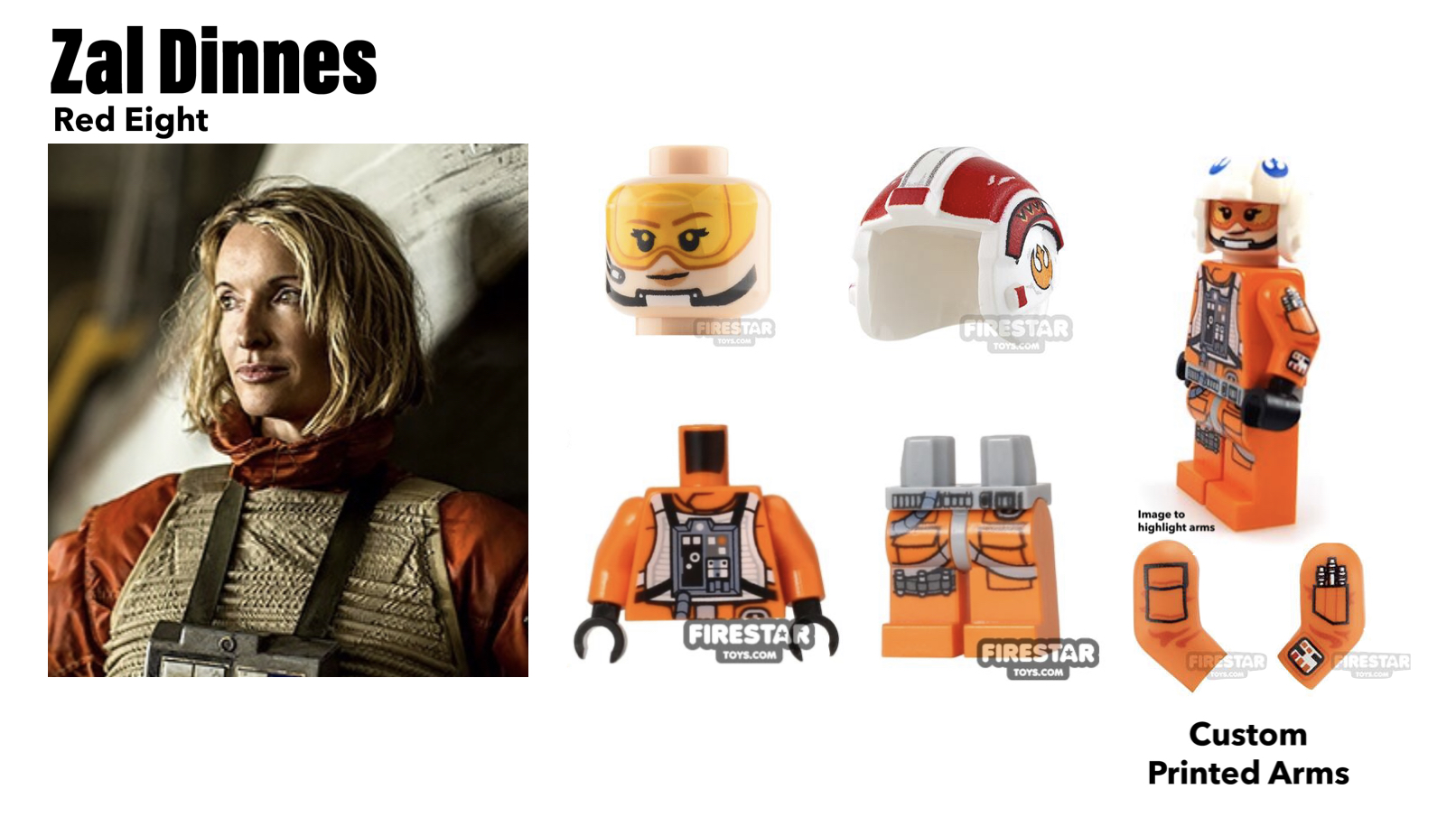 Zal Dinnes is Red Squadron’s only female pilot. She served as under the call sign Red Eight in both the battle of Scarif and the battle of Yavin. She was introduced to Star Wars fans in the franchise’s first live action spinoff film, Rogue One. Although LEGO has never released an official Zal Dinnes minifigure FireStar Toys have produced a custom printed helmet making it easy to create your own version of the minifigure.

To create your own Zal Dinnes minifigure you will need: 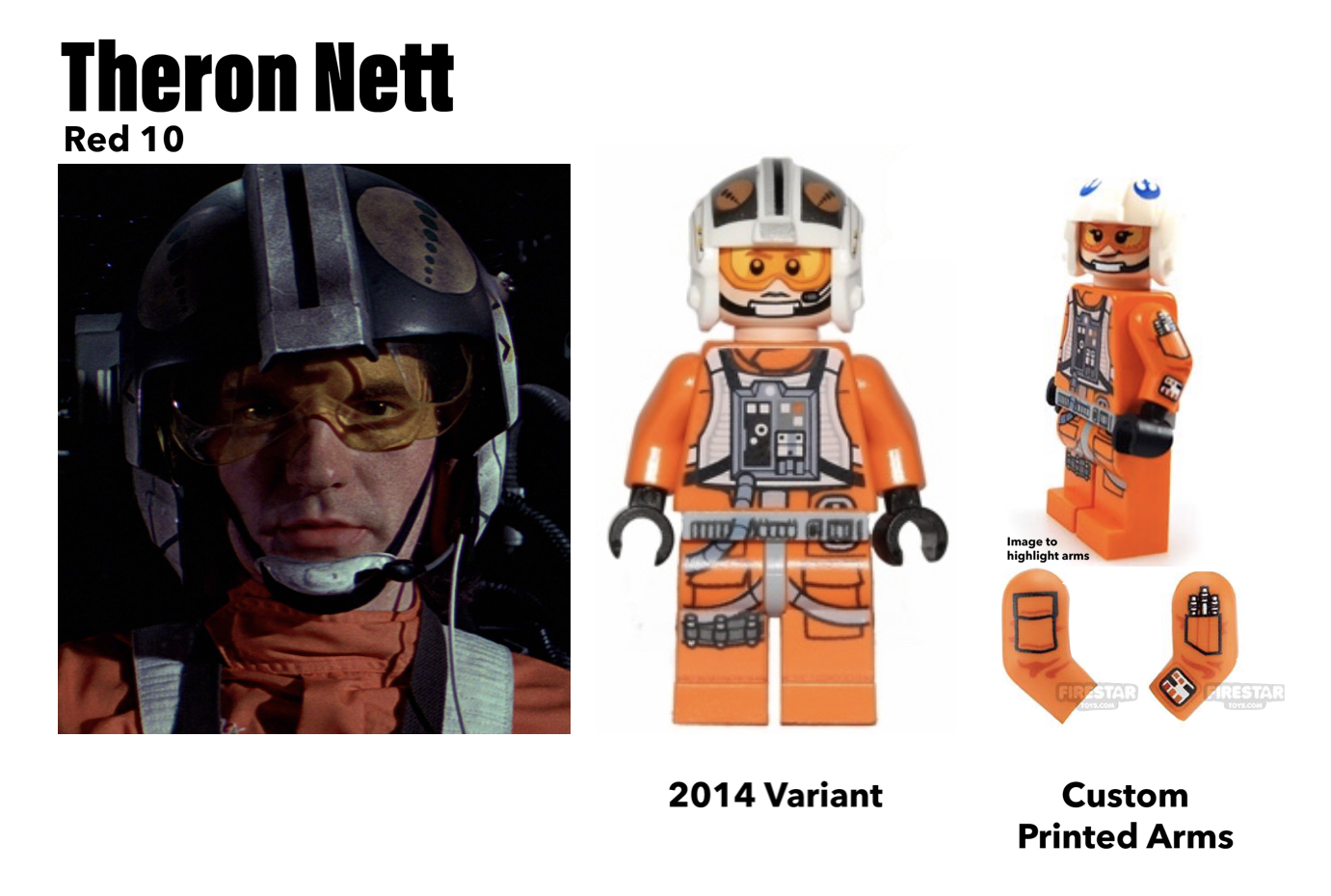 Theron Nett served under the call sign Red Ten in the battle of Yavin. LEGO produced the minifigure in set 75032 X-wing fighter Microfighter. I’m a big fan of this Microfighter. It provided a cheap way to get a new desirable rebel pilot. I’m appreciate LEGO using a blank facial expression for the minifigure. LEGO has recently started using a smiling pilot face that is a little goofy in my opinion.

You can purchase your own Theron Nett minifigure below:

You can purchase a Wes Janson minifigure and use it as a substitute for Puck Naeco:

Alternatively, you could create your own Puck Naeco minifigure using these parts:

Finally, Grizz Frix took on the iconic mantle of Red Five during the battle of Endor. He was the only black pilot in the Original Trilogy. It looks like Frix uses the same helmet as John Dutch Vander. Although LEGO has neglected the character it would be easy to create a custom minifigure using existing LEGO pieces.

To create your own Grizz Frix minifigure you will need:

Did you find this guide helpful? Will you try and create some LEGO Red Squadron pilots? Let me know in the comments section. If you enjoyed this article consider checking out my other articles here. 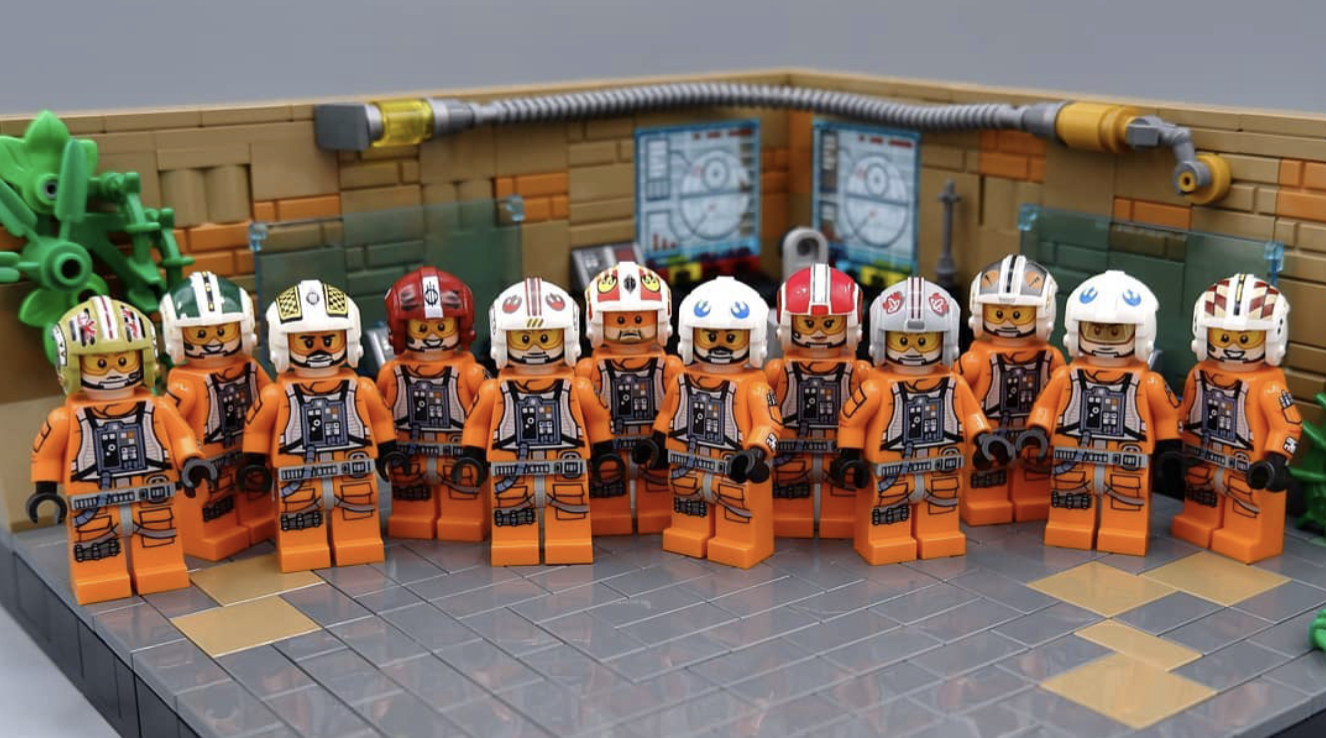 Images in this article were taken from Wookieepedia and Brickset