If you’re living in the Northern Hemisphere, you have probably started to feel the effects of summer. But are you the only one? Certainly not. Your minifigures need their summer outfits and accessories as well. So let’s see all the great things you can provide them here in this LEGO Summer article.

Before heading off to the beach, they need to get their swimwear ready. Here are a few to get you started. 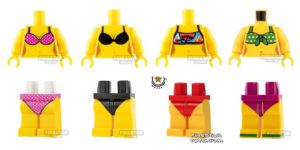 If you’re more like a one-piece kinda gal, don’t worry, we got you covered, too. 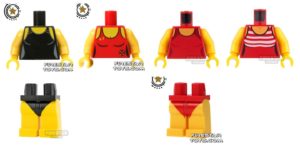 And gentlemen… of course we didn’t forget you. Let’s see those muscles! Or not. You know, whichever suits you best. 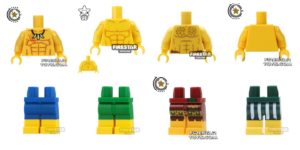 Let’s get something for the little ones, too. 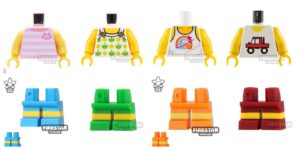 All that sun… better get some sunglasses. 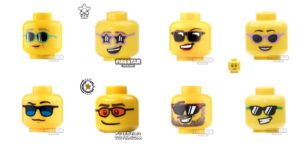 And of course, if you’re Stateside, and feeling a bit patriotic, we have just the thing for you!

For ladies and gentlemen both!

Now we’re ready to hit the beach. But surely, going to the beach is not all about wearing the right outfit. So what is it about? What is the first thing you think of when you hear the word “beach”?

For me, it’s the icecream. It’s one of my first memories. We used to visit my grandparents’ summer house when I was a child, and my grandfather would take me on his walks and buy me ice cream. I couldn’t be happier. Not only because of the delicious treat, but also because I got to spend some alone time with him.

Therefore, I’m going to start with that. 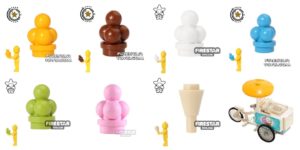 It was followed by animals. I was a strange one, even as a child. Sure, the fish were hard to catch, and didn’t survive much outside the water, but the crabs… now those were a challenge! They buried themselves in the sand as soon as they felt my presence, and I had to get a handful of sand in order to catch them. Even after that, they tried to escape the giant (!) that was holding them. They moved really fast, and in such a funny way, too! At least that’s what I thought back then.

No sea animals were harmed during my little ‘hunting’ trips. A few minutes after I caught them, I sent them back on their merry way. 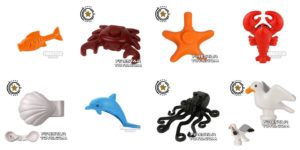 As I grew up, my interest shifted towards something more challenging. I used to put on my skates and with my best friend on her skateboard, we used to go watch ‘adults’ surf. I remember spending hours watching all their cool moves… even without them, the waves were so hypnotizing, we wouldn’t be able to leave until the sun set. 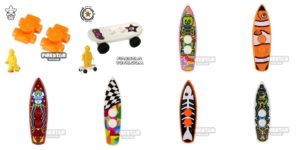 And when my cousins joined us, we did all kinds of stuff. We played games, had races to see who was the fastest swimmer, and of course, drank until we couldn’t speak properly. 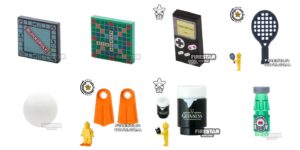 Of course it wasn’t always fun and games. While the boys did what boys do, us girls spent hours upon hours in front of the mirror, changing our hair, trying to look pretty. Our parents weren’t around a lot, so we helped ourselves to my grandmother’s hair dye, too. Needless to say, that didn’t always go as planned. 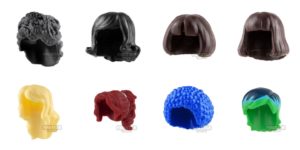 A few years passed, and we suddenly became the oldest kids in the neighborhood. And with great age, came great respon… wait, that’s not how it goes. Still, the neighbors trusted us to keep an eye on the little ones as they played on the beach. Of course that got boring real quick, so we brought a few things to keep ourselves entertained. Mixed tapes were a big deal back then, and so were boomboxes. When the little ones went home, we would go to the fairground to have our own fun. After all, we were adults now (!), and had permission to stay outside a little bit longer. 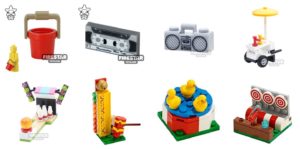 One summer, one of my cousins came and told us all about the band he was in. He was beyond excited, and so were we. It was a small neighborhood, and we had already done everything we could do years ago. So we decided to form our own band. We asked our parents to bring what we had at home, and found a few instruments the neighbors’ kids have grown out of. We were ready to rock’n’roll!!

That… wasn’t a big success. Even though we got along pretty well, when we realized someone had to lead in order to create something at least resembling music, everyone thought they should be the leader. After a few practices – and by practices I mean fights – and a few weeks of not talking to each other, the instruments went back to collecting dust. 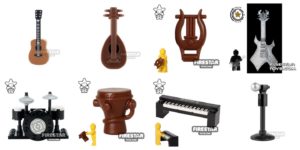 We did try to go camping once – and quickly found out that going camping with a bunch of teenage girls is not ideal. There were bugs, and dirt, and “OMG my hair looks awful!” screams everywhere. Our camping trip turned out to be a really long walk, and none of us has ever mentioned that experience ever again. Though, my cousin falling off the cliff and almost breaking her arm may have played a big role on that, too. 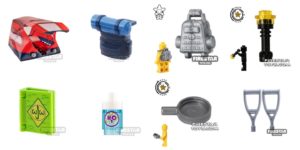 So, here are a few ideas to get your minifigures started on some summer activities. Thank you for walking with me down that memory lane as we went through our first LEGO Summer catalog.

Next time you take your minifigures out, ask them what they’d like to do this summer. Some may like climbing rocks (those are the crazy ones 🙂 ), others, just relaxing on a hammock, with a nice book in their hands. If any of them tells you they want to start a band, though, make sure you get lots and lots of earplugs. I’ve heard that they perceive sound much more differently than us, and what they call “music” is usually just plain noise.

I wish you a great summer – wherever you are, whatever you are doing! 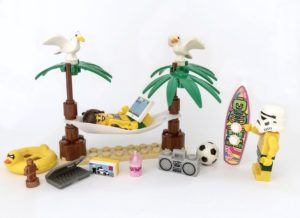 – You know you’re not supposed to work during your vacation, right?

Increasing Movement in your LEGO Minifigures to Spice Up Your Photos