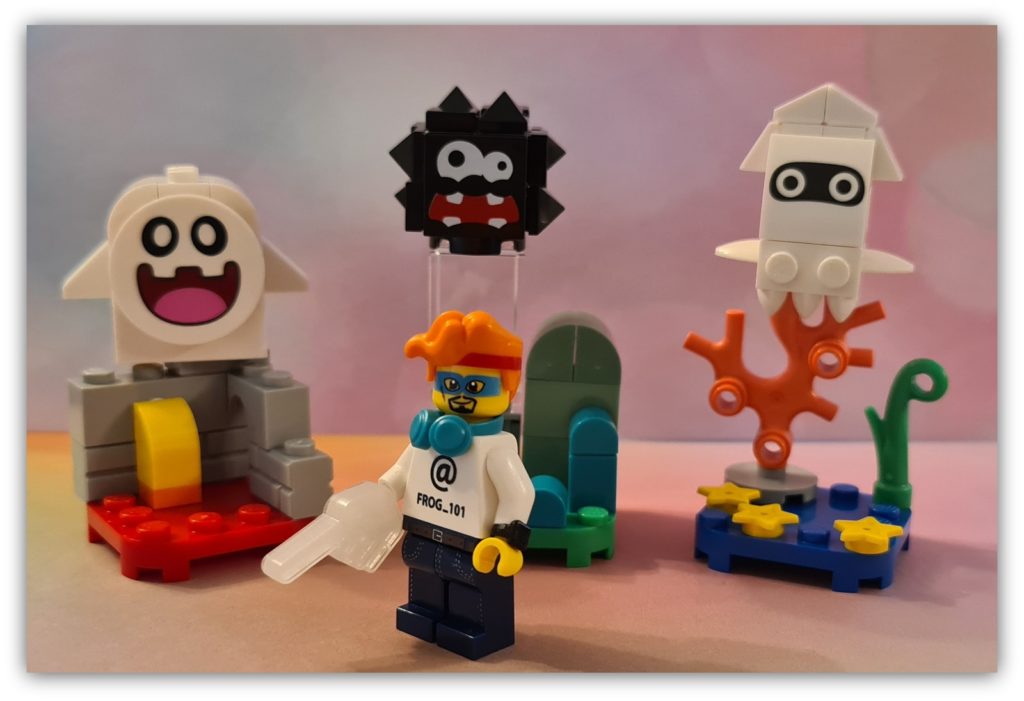 Earlier this year, LEGO worked with Nintendo to produce an interactive play experience that combined LEGO with the platform-based video game. What I almost missed though was that in addition, LEGO also released a ten-figure Super Mario collectible character series to accompany this set. This article is about these figures.

I guess I should admit that even though I had an original Gameboy when it came out, I have never been an avid gamer. In the last few years, I have tried using the Wii U and now have an Xbox (which I use almost exclusively for Forza Horizon 4) but a lot of video games just confuse me. However, I am very much into the cult nature of the toys and other items that surround these games; figures like Peely from Fortnite is on my desk even though I’ve never played Fortnite. So, I won’t be talking about the gameplay.

The world’s most famous plumber

Before I look at the figures, I thought I’d take a moment to look at the focal figure, Mario. His first appearance was in 1981 when he appeared in the barrel-jumping game, Donkey Kong and depending upon the paperwork you read he was either Mario or Jumpman. As further trivia facts, whilst he was agreed to be Italian, his original trade was that of a carpenter, changing careers as a plumber when his own featured underground settings. The Super Mario platform game was released in 1985. Since then, there has been at least one SM game for every Nintendo platform; and there is a lot of discussion as to how many games there are in existence now.

According to the official UK Nintendo website (at time of writing, August 2020) there are 14 sets as part of the collection. There is the Starter Course (Set 71360), eight expansion sets, four Mario Power-Up packs and the character packs (set 71361). These sets cost £50 for the starter set, between £20 and £75 for the expansion sets, about £9 for the power-up packs and £3.50 for the character packs. 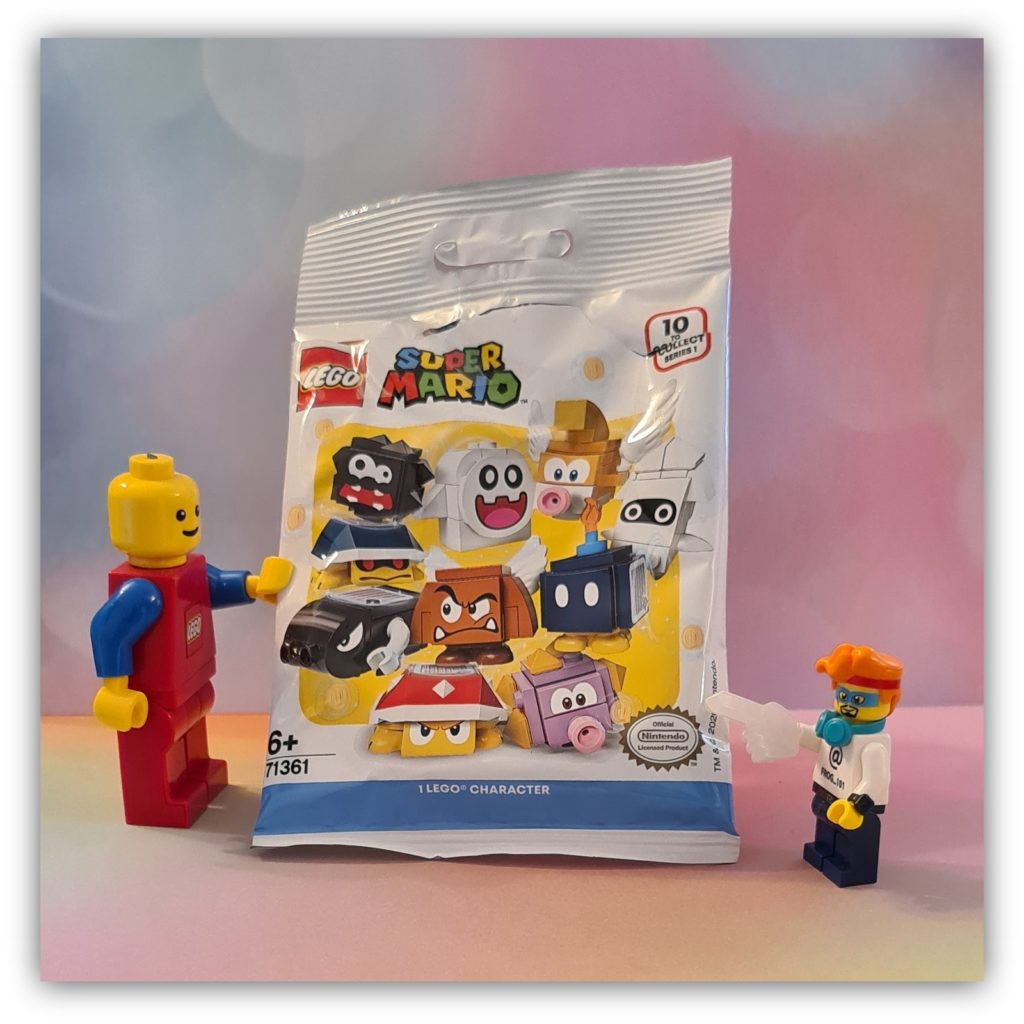 The character packs are blind bagged; although I’m sure that there is something in each that would enable you to work out what figure it contained. I bought mine already opened and inspected. Although I’m not a completist collector, I do have a folder that contains all the paper sheets that come with all these collectibles. Consequently, I don’t buy all the figures; besides, I don’t have the space to display them all! 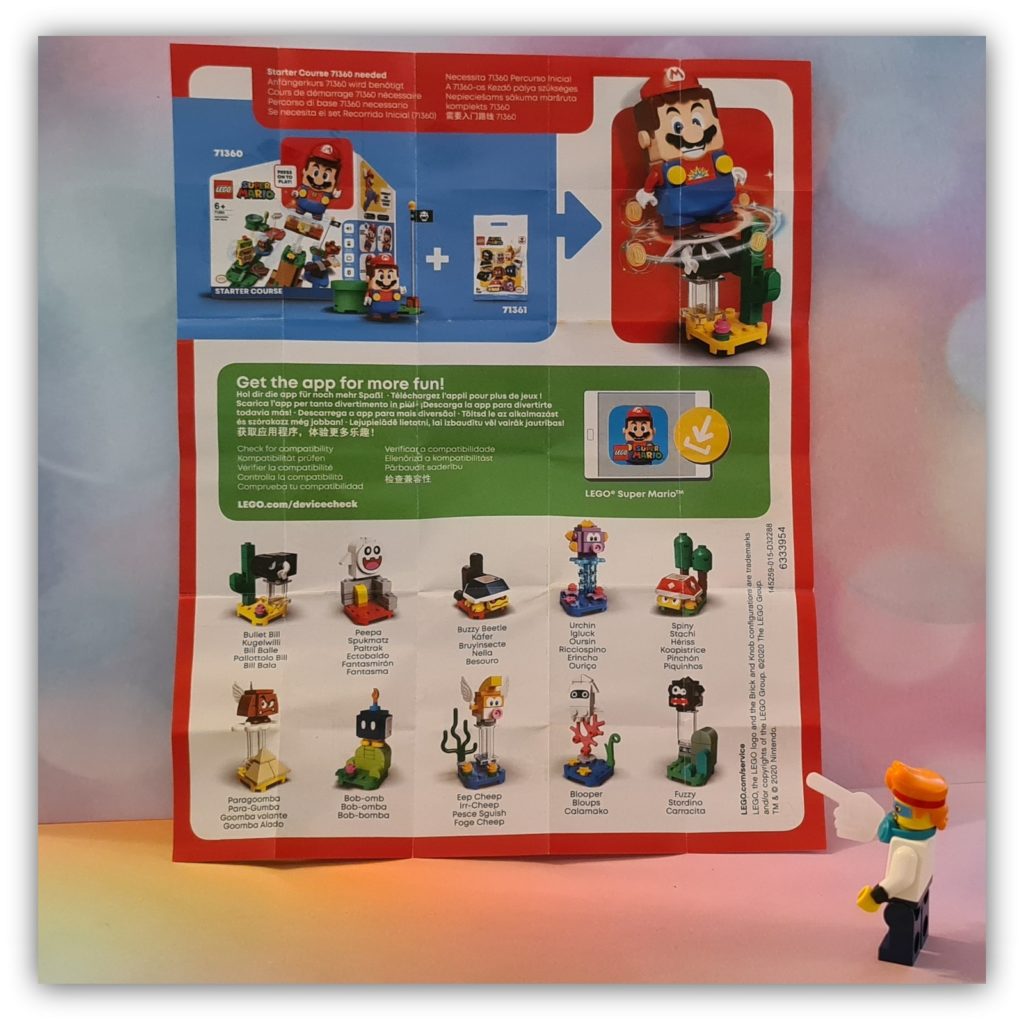 As I said earlier, I collect these leaflets that show all the figures in the collection. On the other side of the sheet are the build instructions for each of the figures.

The next common part in all these sets is the base part and the “action brick”. 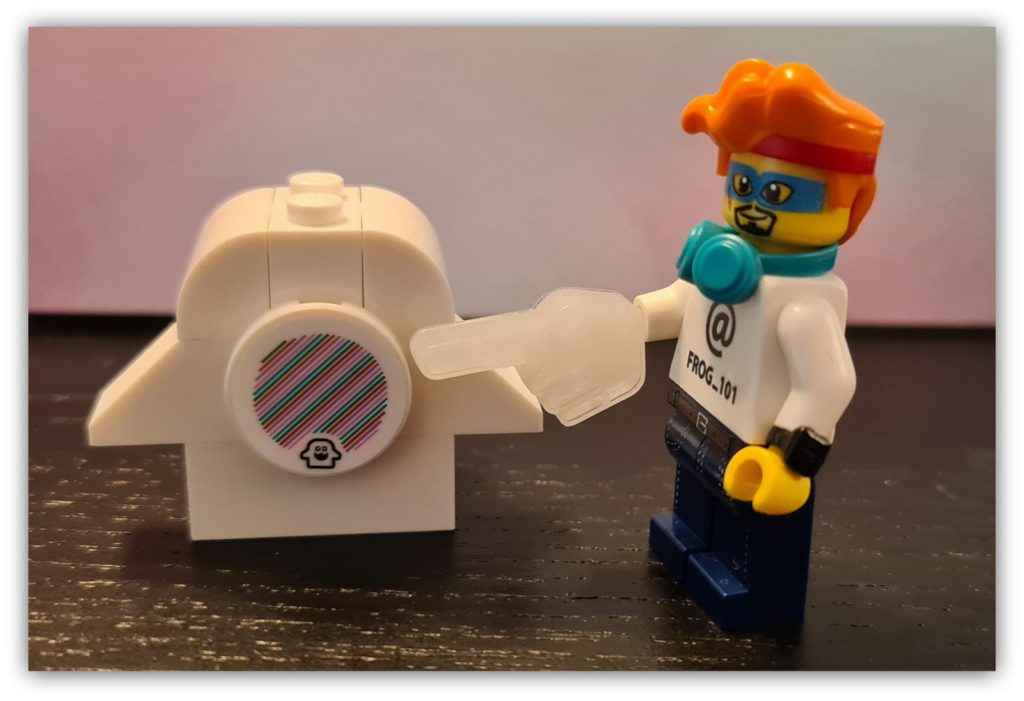 I believe that this tile is the “action brick” as each of the figures has one. It looks like a standard brick with printing on it – a little disappointing perhaps based on the technology that is embedded in the Dimensions figure plates; but if it works for the game then so be it. I do like the fact that each of these also has a little image of the figure, so if it should fall off (it is clipped on using clutch power rather than being built in) it can be applied to the correct figure. 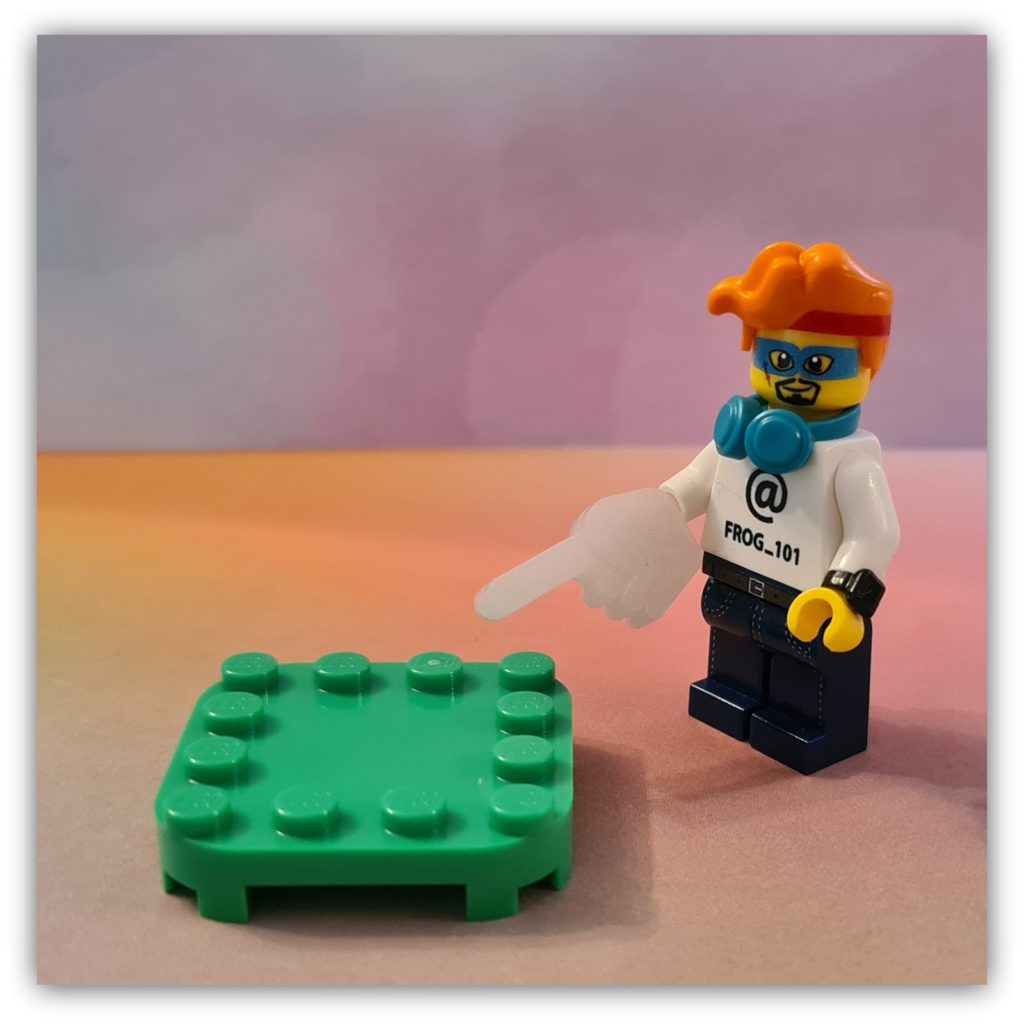 In conjunction with the action brick is the base part which these figures will use to plug onto the game. It’s an interesting display platform, sitting two plates high with rounded corners. I’m not sure how easy this would be to reuse in a normal LEGO build, but I reckon someone is already thinking of something.

There are ten figures in the collection, they are:

I bought Blooper, Peepa and Fuzzy. 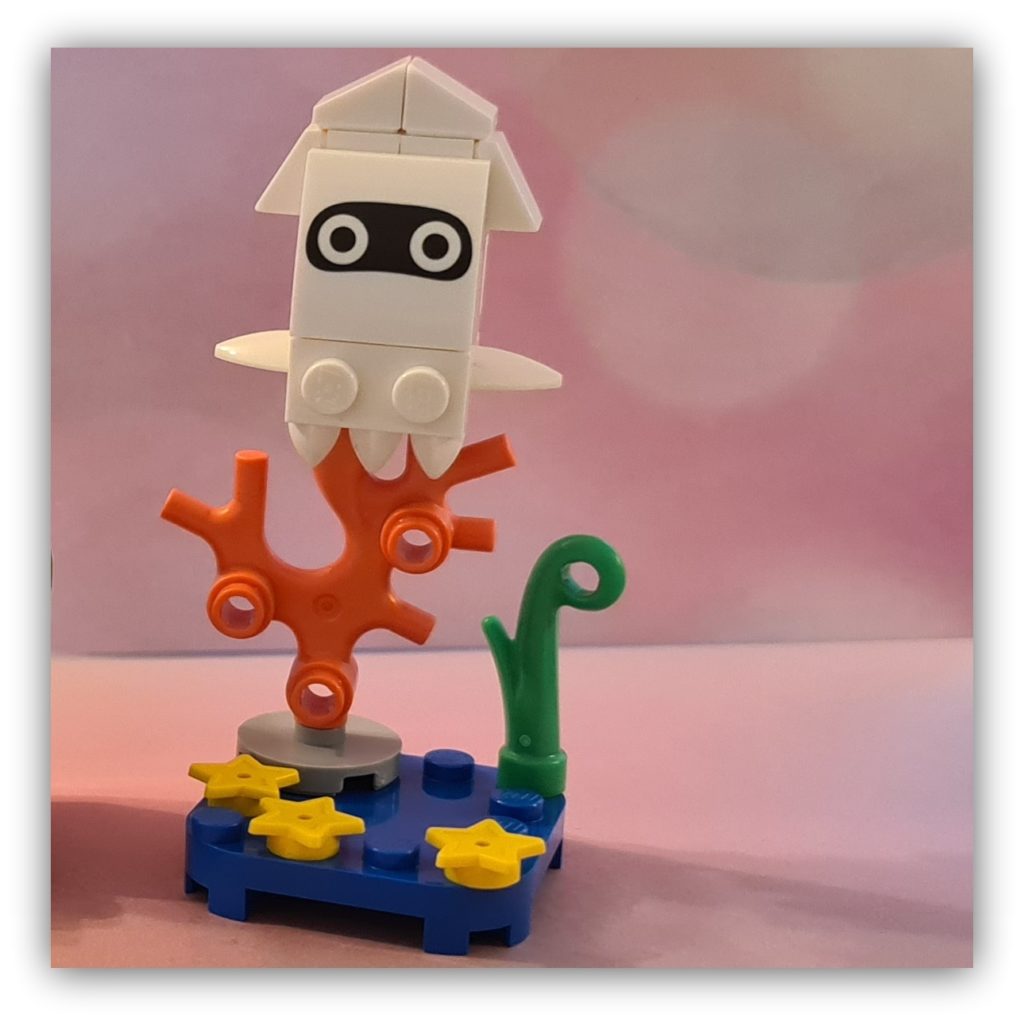 Bloopers (sometimes also referred to as Bloobers) are squid-like creatures that are found in the ocean, which is reflected with the blue base and the aquatic plant life. As a trivia fact, the blooper was called this because this is the sound that bubbles make when they breach the water surface!

A relatively simple build using SNOT building techniques for the figure. The action brick is around the back. I think the orange coral and green plant could be useful elsewhere. 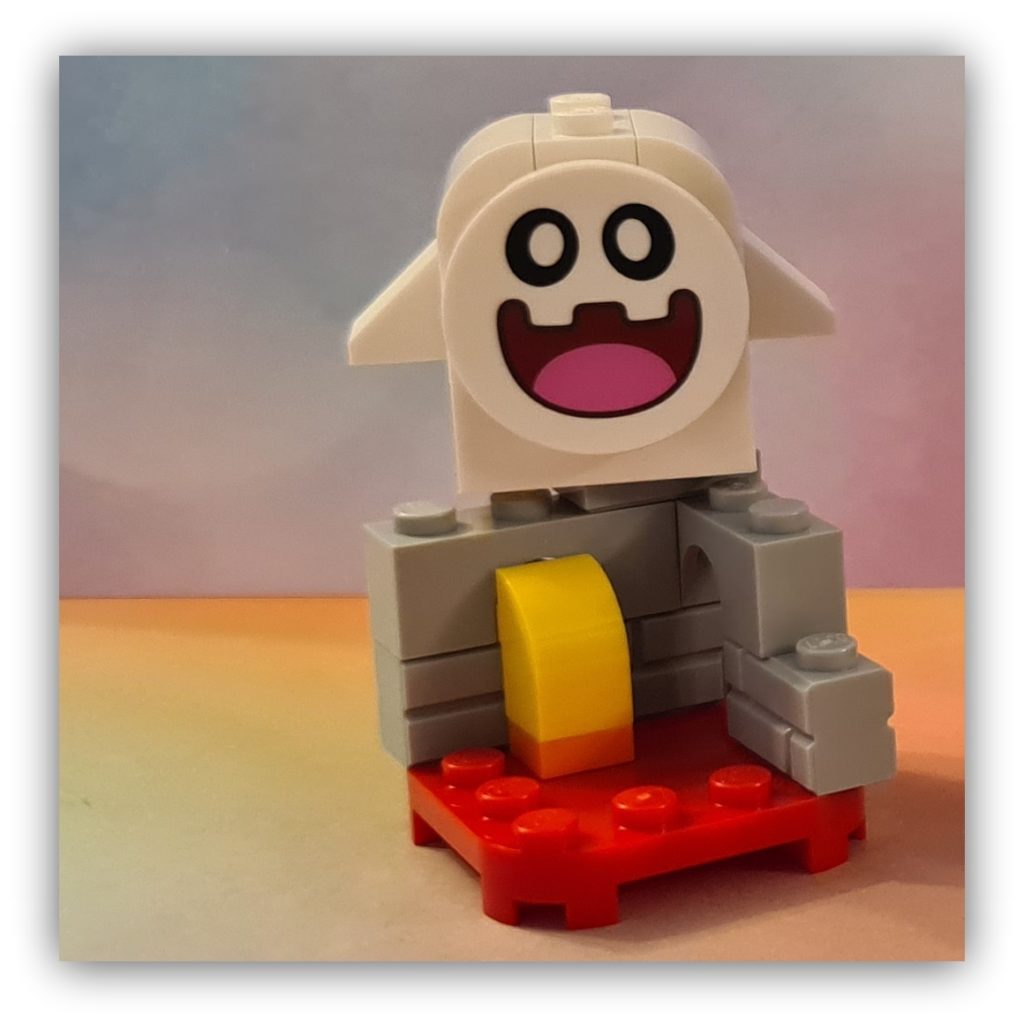 Peepa is a common ghost enemy, part of a group known as “Boo buddies” or “Boo diddleys”. Peepas are small ghosts with stubby arms and a smiling face showing two teeth; and this is well represented in this figure. I couldn’t find any reasoning for the base design, if there was a particular reason for the red base or what looks like a waterfall from the brickwork.

In terms of parts, apart from the 3×3 disk for Peepa’s face, there isn’t any special parts in this figure. 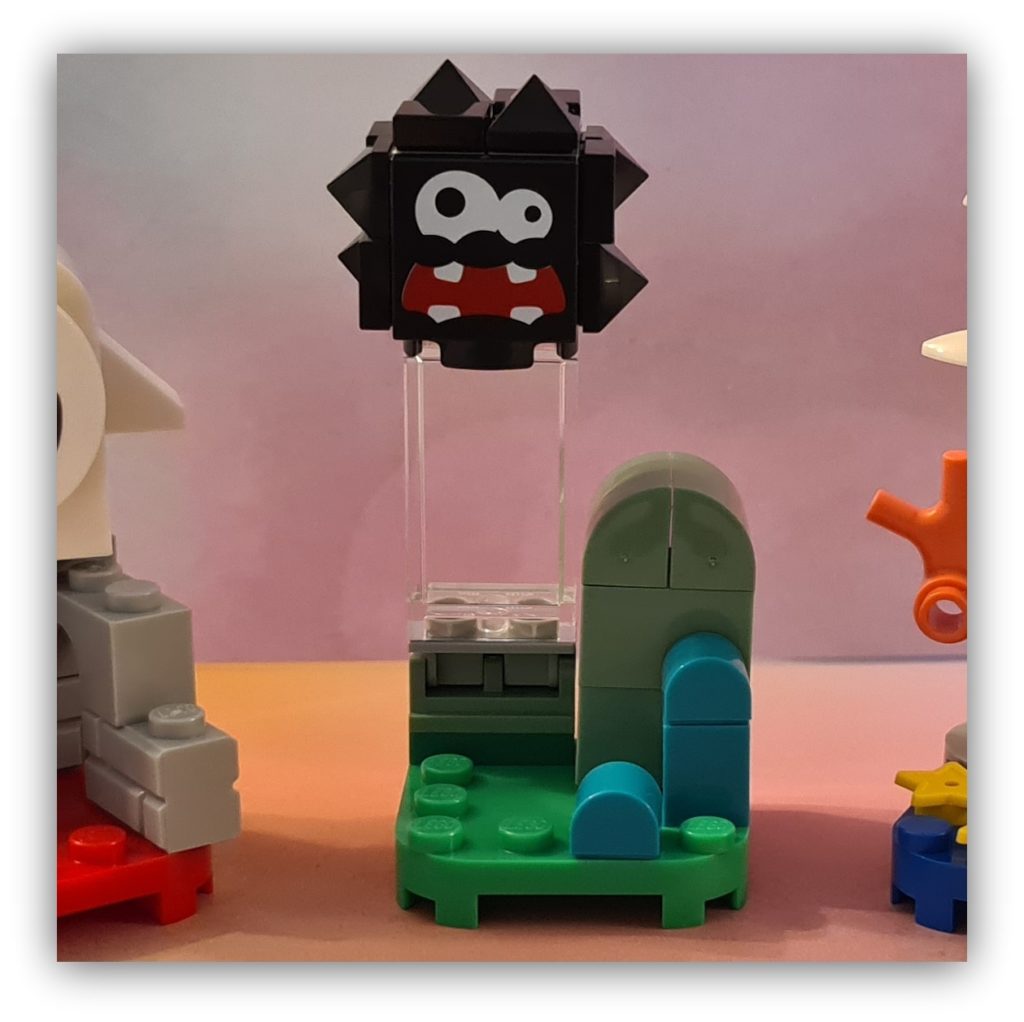 Fuzzy’s don’t attack Mario but can cause damage if their paths cross. According to the Mario Wiki site, Fuzzies are “small, black-furred creatures with unusual, spiky bodies. They possess two strabismus eyes and large teeth. Despite displaying some level of intelligence and the ability to speak, Fuzzies are, for the most part, wild.” I had to look up strabismus eyes and found that it meant looking in different directions.

In terms of size, this figure is slightly smaller than the Peepa. However, it does also have a hinge to enable some movement in the build. I did like the side and top build which consisted of a flat and diamond side part; the face is a printed 2×2 tile.

So, what’s the verdict? 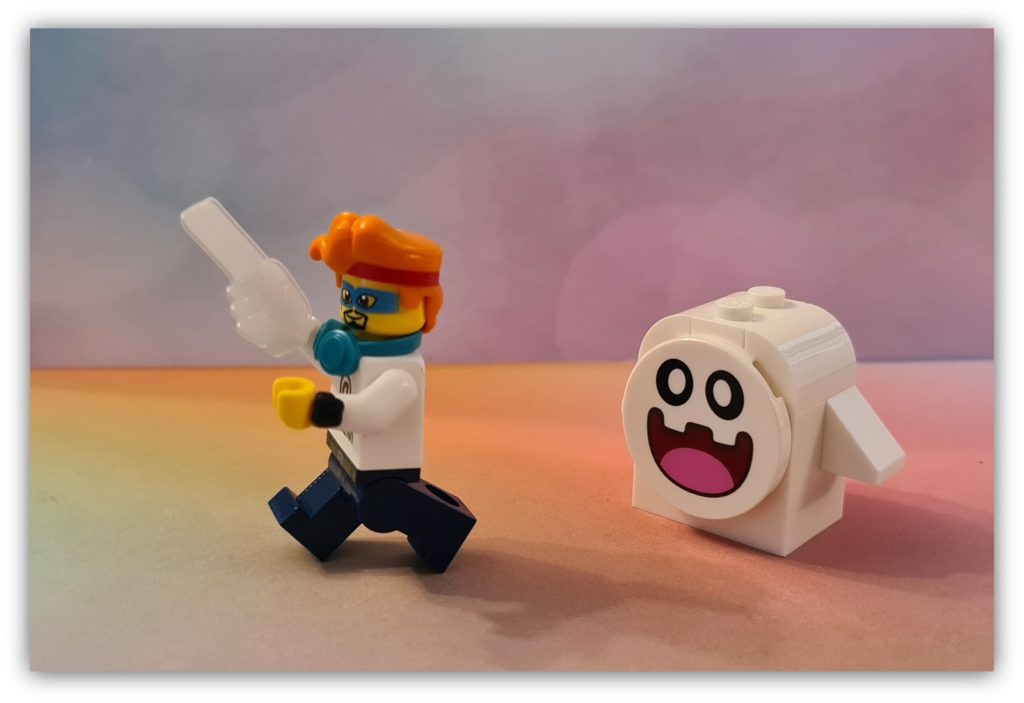 I think if you have already bought your LEGO Super Mario Starter set, or one of the expansion kits, then you already know that these will be an additional play element for your sets and so worth getting hold of.

If you are a minifigure collector, then this is a harder decision. They aren’t CMF, so perhaps these fall to the polybag collector rather than the CMF series (and besides, it won’t be long before the next Harry Potter series is released).

However, unlike a CMF series, when having more than one figure could be a bonus (for example, having more than one soldier figure isn’t a disappointment) for these sets I’m not sure that gameplay would be improved with more than one Peepa (I could be wrong though). I also felt that whilst these figures showed some of the main characteristics of the figures, some, such as Bob-omb, lost a lot of the essence of the figure; but this in part is due to the low part count.

If you are a Super Mario fan, what do you think? Let me know in the comments!

LEGO Christmas Gift Ideas for Fans of LEGO (and everybody else!)