I saw an announcement by one of my favorite artists on Instagram a while ago. There was a discount on one of his latest pins, and as soon as I saw it, I knew I had to have it. As I was looking at his other designs, a light bulb went on in my head. I thought, we all love those plastic bricks and people. That is, after all, why I’m writing here, and why you’re reading it. However, there’s a part of LEGO that is completely different than building or collecting: A part that inspires people.

By now you know how much I admire those who create amazing builds from scratch with our beloved plastic bricks. They are all artists in my eyes. Same goes for the collectors, they are not just randomly buying whatever comes their way, they have certain rules, certain limits. One may collect Marvel characters, while the other is more of a Star Wars guy. Some are okay with custom figures, the others, not so much. They have their criteria, and their collection grows accordingly.

But what about those who take the idea of LEGO bricks and minifigures, and create something entirely different? Something that isn’t made of LEGO bricks, and yet when you look at it that is exactly what you see. Like the artist said, “Ceci n’est pas une pipe” or “This is not a pipe” with a twist: This is not LEGO.

Before we start, let me just say that there is no way that I’ll be able to cover all the artists around the world. The ones mentioned here are just the tip of the iceberg, and there are many, many more waiting to be discovered. 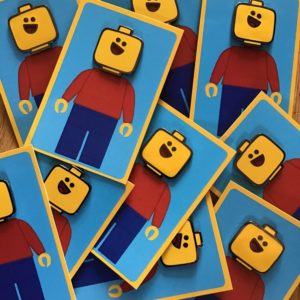 You’re wondering the pin that inspired me, right? Here, let’s start with that and move on from there.

This is called “Yellow Plastic Head Pin” and made by Mister Hope. I’ve been following him on Instagram for a while, and I love all his illustrations. They are whimsical, magical, and just the right amount of silly to make you smile. He has made pins of some of his illustrations, and this is one of the latest ones.

Now, tell me you don’t see a LEGO minifigure smiling at you here.

Ladies and gentlemen, I give you Alex Solis! I have difficulty finding the words to describe him, but one of the first that comes to mind is witty. He has many series of illustrations, like Icons Unmasked, Adorable Circle of Life, Pokeballs and of course, The Famous Chunkies. Some of his illustrations have been published as books, some has become pins and even toys. In the image, you see what happens when a LEGO minifigure has too much fast food.

While I enjoy his art very much, I have to warn you that some of them may be a bit inappropriate, especially his Steganography series.

I’ve stumbled upon our third artist, Caitlin Peters by chance, and as soon as I saw her pins, I fell in love with the cleverness of the designs. Here they are, the Stackable Snacks! She has many beautiful illustrations, some traditional, some digital, but being an AFOL, none of them compare to the wonderful snacks made out of LEGO parts – well, mostly anyway. She has recently completed another Kickstarter project which helped some of these snacks become pins. 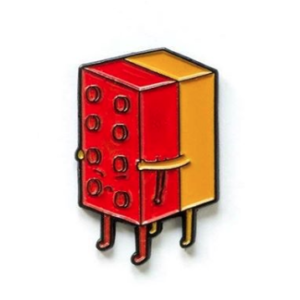 Confession time: I’ve seen the illustration “I Will Never Lego” by Lim Heng Swee some time ago, although I can’t remember exactly when. I loved it, but at the time it was a random image that appeared on my browser, so I didn’t bother to check who the artist was. I thought it was worth mentioning here, so I decided to do some research. Imagine my surprise when I saw that it was also made into a pin – 3 years ago!! It was a limited edition run, and I don’t know if the artist will make them again, but if he does, I’ll probably be one of the first people to get it!

While looking through his gallery, I kept remembering the phrase I learned in college: Less is more. Take a simplistic drawing style, combine it with wonderful wordplay, and you get Lim Heng Swee. I especially recommend his Moody Animals series, they’re guaranteed to make you smile.

I think the first wooden LEGO minifigure I saw was Thibaut Malet’s. I was shocked to see someone spend god knows how long to create an upscaled minifigure. While I don’t know much about woodwork, I have spent some time making models, big and small, and I know how tiring and frustrating it can be. And he made 100 of these, not to mention the ones he made during the sketch phase! 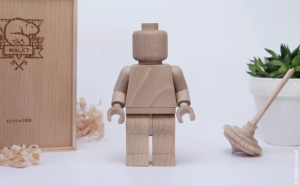 After some time, I stumbled across Simon Beggs, on a page where he describes in detail how he made a wooden LEGO minifigure. Honestly, I think I have more chance to understand a page written in French. But for those who are familiar with the terminology, it must have been very helpful because there are 4 others who made similar creations using his instructions. 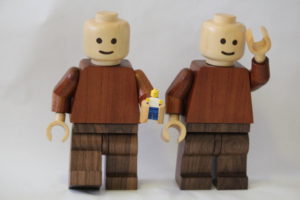 And more recently, I’ve learned the existence of a true master. Don’t get me wrong, I appreciate all the artists I’ve mentioned here, and respect them enormously. However this man, Craig Daniel, takes it to the next level. His creations are simply jaw-dropping. Unfortunately, I was not able to find his personal page (his name doesn’t make it easy, either, when there’s a 007 with a very similar name!). However, I did manage to find a great interview showing many of his creations. 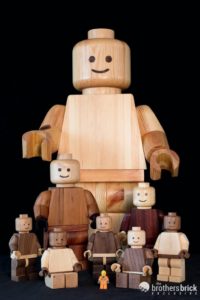 The next artist, Mat Green, makes our favorite minifigures from steel. Just like the ones made out of wood, they can be posed and taken apart into pieces, similar to their LEGO versions. I imagine working with steel is probably even harder, so the scale of these minifigures is a bit bigger, but tell me, wouldn’t you want to have that pirate guardin’ your garden? (no pun intended – well, maybe a little)

There’s more where that came from.

The Anatomy of a Minifigure

This one is my absolute favorite. The man is a genius, his creations, ingenious. I’m sure some of you have heard about him or saw his designs before, since he has been at this game for a while. Ladies and gentlemen, I give you… 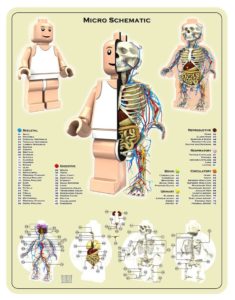 The first time I became aware of his existence was with this “Micro Schematic” image. I remember looking at it over and over again, reading all the labels, checking each and every detail carefully. He had taken something I loved, and dissected it! I was shocked, amazed, in awe, and all the other similar words you can think of. It stayed with me for a long time, and I kept going back to it, looking at it once again, and again, and aga…

As time passed, it was replaced by other things. An illustration here, a sculpture there… Not forgotten, but not as important as before. I still went back and looked at it from time to time, but those viewings were less frequent.

And suddenly, there it was! I couldn’t believe my eyes!  Someone went and made a toy of this amazing creation! I can’t remember where I first saw it, or who posted the image, but whoever it was, they have my undying gratitude. I immediately contacted the company who made it, Mighty Jaxx, and they were kind enough to direct me to another store that shipped to my country, Collect & Display. After a few weeks, I was the proud owner of a Micro Anatomic figure! 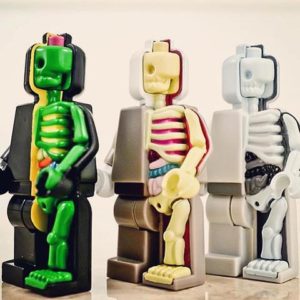 Now that I was more aware of the benefits of social media, I decided to follow Jason Freeny on Instagram. Sure, I may not know all of the characters he sculpts, and you can say “Meh, what’s so original about applying the same idea to different characters”, but come on! We are all fans of LEGO, here. If you take away the printing, won’t the minifigures become the same?

What I love the most about Jason Freeny is how he shares the process. You see him sculpting, painting, taking something you know and turning it into something else. It’s – I feel like I’m running out of words here – magical.

A Baby is Born

Then he took it one step further and made this! I wasn’t lucky this time, though, the guys at the customs had just started to hate me, and there was no way they’d let this one pass. Now this was the year LEGO released the baby figure, 2016, and though I’m not sure which one came first, Jason Freeny’s Brick Baby will always be the first-born for me.

And of course, every baby needs a mother. As far as I know, this sculpture was never ‘mass’ produced like the other ones, instead it is sold as a print, labeled “She has my eyes”.

Somewhere along the way, the Micro Anatomic figure was hit by a growth ray and got bigger – a LOT bigger. As a result, it could now move its head, arms and legs. Like the smaller one, several different variations were made.

Like I said in the beginning, there are countless of artists inspired by LEGO, these are just a few of them. Now let me ask you, do you have a favorite? Someone you think is worth mentioning? Let me know in the comments and who knows, the next time you’re here, you may see their creations, too! 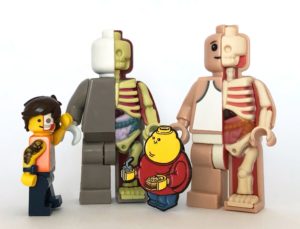 All images belong to their respective artists, and were either taken from their online shops or their Instagram accounts. Caitlin Peters was kind enough to send me the images separately, and the one showing the creations of Craig Daniel was borrowed from The Brothers Brick. The one right above, as you may have guessed, is all mine 🙂

LEGO After Dark: Glow in the Dark LEGO Pieces

Cleaning LEGO and Other Fun Activities for Everyone