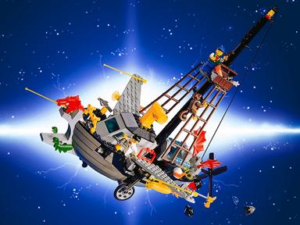 Let’s time travel to early LEGO history. Back in the early days, before LEGO Star Wars and other commercial themes, the designers of LEGO played it safe. Good moral fibre and all that was on display in their themes.

LEGO had played around with many various space themes, though nothing seemed to change. It was pretty much the same sets, but in repackaged form. Kids were getting bored with the same thing, over and over.

That was until 1996! New and different themes started to appear. One such theme was based on time travel, the first one of its kind. The theme was called Time Cruisers and the idea came from a LEGO fan who built a time traveling car back in 1994. (This sounds awfully familiar.) The concept was well liked in Europe, and was first turned into a comic, and then to LEGO sets in 1996. I believe there was even a board game at one stage.

What was it all about?

The idea of the Time Travel theme was you could go anywhere in time with the help of specially designed vehicles powered by hats and objects from different eras. You had a mission to complete, and depending on how well it went, you lived to see another day. 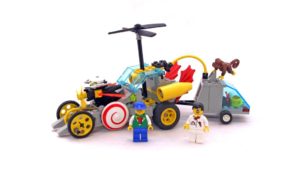 and the assistant Tim were the main characters of the Time Cruisers. They had help (of a sort) from a cranky robot, named (what else?) Cranky. A monkey also travelled along, but his name escapes me.

These time travel adventurers helped to repair time. Whereas in another theme the Time Twisters (they arrived a year later) the characters of Tony Twister and Professor Millennium, helped along by a ghost and a skeleton, meddled with the past.

A total of 16 sets were based on these two themes. Although I bought a couple of them when they were released, it was the idea behind it, rather than the sets themselves, which drew me to them.

If you’re confused after reading this, then you’re not alone. The sets did not sell well; kids did not know what to make of them when they first arrived. They where a mish-mash of LEGO pieces, and most kids thought it was just another way of selling basic sets. (They weren’t wrong.) Therefore, it came as no surprise to me that we never heard of them again.

All of this got me asking, “Could a time travel theme be worth exploring again, if done right?”

Well, with Back to the Future and Doctor Who aside, I’d say “Yes!”. I think if it was done right, then there is scope for a LEGO time traveling theme to be revisited. I could even be something like H.G. Wells’ famous novel The Time Machine. Who knows? I really liked the story. (It also happened to be one of my favourite movies growing up.) But what I do know is there are plenty of sets based on different eras in LEGO’s history that could be used to promote this. The theme just needs to be handled right, and have a good story behind it.

As for the time machine 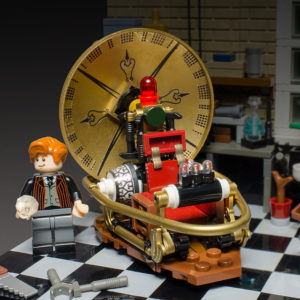 to be featured in the theme, with the DeLorean and TARDIS aside, it would have to be something new and as of yet unmade. Ideally, it would be something with moving parts, sounds and lights, and bits that would grab a kid’s attention rather than something static. Of course, this would be a good way to sell it.

From LEGO’s perspective, all these bricks, whether they be in the form of brick effects or not, have all been used previously in one set or another. Some examples are the UFO sound brick, the Monster Fighters Lab light brick, and the Time Cruisers/Twisters disk with spiral pattern. Last but not least, the clock face of the Big Ben set!

These are just some of the vast array of bricks at the designers disposal, and surely they can come up with something decent. Or, perhaps, at least someone could put it out there on LEGO Ideas? What would a set like this look like? Using these parts mixed with technic movement would indeed help sell the time machine set.

As for the characters or minifigures, if you look at the collector series, some famous characters from history have already been showing up: Shakespeare, Abraham Lincoln, Caesar, and Cleopatra, just to name a few. I’ve even seen a custom Donald Trump on FireStar Toys. Many other famous characters from history could be used promote this. The list is as endless as the potential sets. Perhaps the story behind their achievements, or what made them famous, could be added to the theme in some way.

However, a warning needs to be issued. If time travel were possible, would you change history? Villains in this theme would have to be limited, because as history teaches us, there is never a nice villain!

Regardless, a LEGO Time Travel theme could also be used as a learning tool in schools and at home to teach kids a bit of history. Not to mention, this would allow the kids to have a bit of fun into the bargain, as they build the sets and collect the minifigures. Of course, learning would be high on this agenda. I just feel that there is an opportunity here for good and it’s going to waste.

The story sets would be an add-on and would include a map of key moments in history as well as a brief bio on the character which you could build on a baseplate. Maybe even a sound brick with a famous quote might add interest? Probably the one regret in all this would be that there would probably be none of H.G. Wells’ morlocks, which in this case, would not necessarily be a bad thing!

(That’s not to say a model based on H.G. Wells’ machine isn’t possible as I have seen a few custom versions of both the 1965 and 2001 versions. Personally, I think the second one is the better machine, but that’s because it has more moving parts. I reckon if someone built a UCS Technic version of that machine, it would also be something to see!) 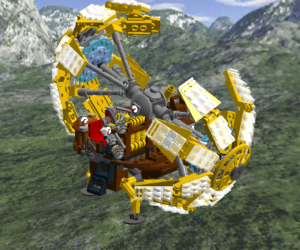 There is also the possibility of LEGO Time Travel sets showing what the future holds: flying cars, lunar bases and even a trip to Mars, as these already exist in current LEGO sets. Some of the LEGO Ideas sets have already expanded into the history side of things. These show great moments throughout history, so it’s not new, it might just need a kick in the right direction.

The time machine is a medium that gets you there and ties all the sets together. History also doesn’t have to be bleak, like most of the history lessons I had when I was a kid. Great sporting events, crowning achievements, and world changing inventions can also be included.

For example, the Apollo Moon landing with Neil, Buzz and Micheal; the signing of the Declaration of Independence; the code breakers at Bletchley Park; Freddie live at Wembley for Band-Aid. My personal favourite is the contribution to computers during the 80’s that Steve Wozniak, Steve Jobs, Bill Gates, and Paul Allen participated in. They are the reason why I’m on this machine today, and telling their history would be good.

Finally, to tell H.G. Wells’ story The Time Machine in LEGO would be an achievement in itself! What I wouldn’t give to see the dressmakers shop window and a way of changing the manikin while the machine was in motion! Someday the designers of LEGO will see the value in this.

These are just a few of the ideas that spring to mind. LEGO, too, has a story to tell and what better way to tell it than through playing with the very bricks they create?