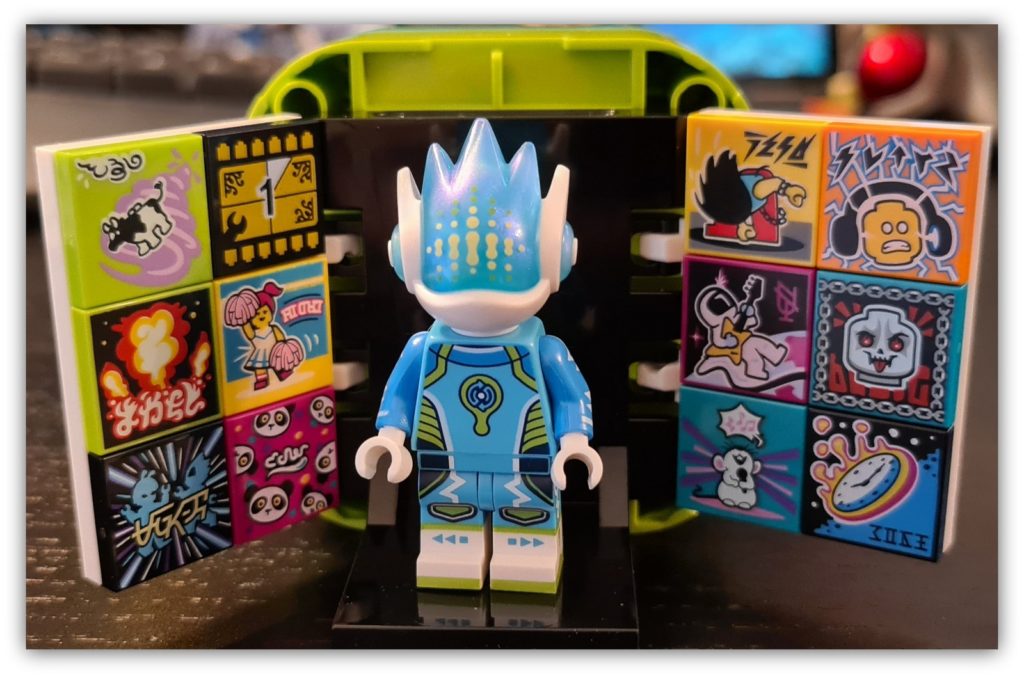 LEGO have released their latest theme to the world; the augmented reality (AR) music theme of LEGO VIDIYO. With a graphic palette not unlike the 1980’s video and with their star performer L.L.A.M.A. releasing a song with real artists, I thought I should look at the theme, the sets and the collectible bits.

First, let’s look at the  LEGO VIDIYO app. It works for both Android or Apple operating systems and can be downloaded from your app store of choice, although I found it easier to go to the LEGO site and link from there.  I think there’s probably a minimum specification, but you should check that.

The wonderful thing about the app is that you don’t need to have any of the sets to use it, although the options are limited as to the music you can play. But once you have one of the sets you can access the range of music, something I was pleased about.

Unfortunately, I found that the system had turned off my ability to take screen shots of the app, “for security reasons”. 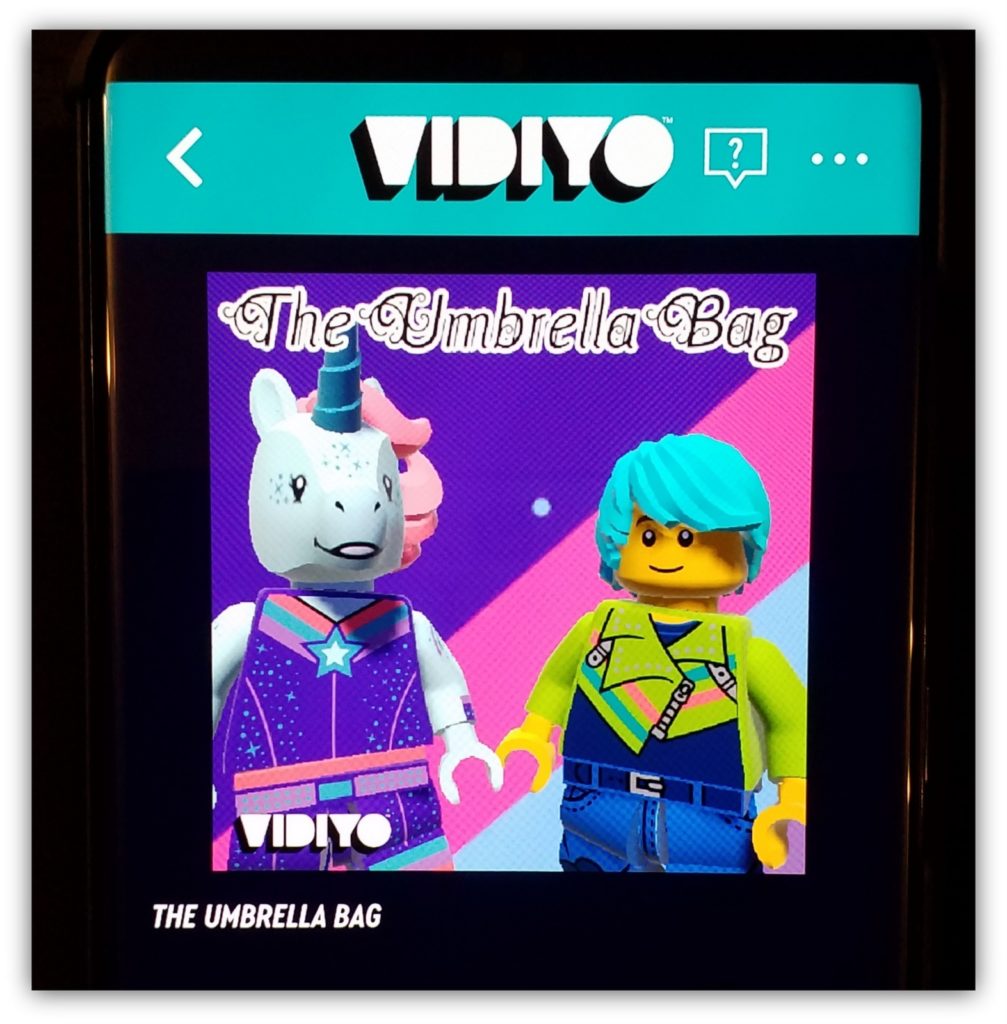 The app is quite fun, you choose your backing track and as it records you can add “beat bits” and effects to the track. This could be adding the sound of a chicken or adding rainbows to the video. Each video isn’t very long, but once you’ve created it you can then share it with everyone. The band naming is also fun in a very random way, which is how I came to create the band “The Umbrella Bag”.

Because of its AR nature, you can set the video to record anywhere which could be at your desk, in the playground or just in the park! There’s a helpful splash message to remind you not to record your video in the middle of a busy road which is quite nice.

The music is a mixture although limited to about thirty tracks, but these are from the Universal Music label. I would suggest it is mostly aimed at a younger audience; however, M.C. Hammer and Diana Ross are present in the list which is nice for us older people who want to play.  I must admit this was a surprise, as I was expecting something simpler such as Baby Shark (not in the list) or even Everything is Awesome (also, surprisingly, not on the list of available songs). Having said that it could be that the songs are limited to the bandmates that you have scanned in. 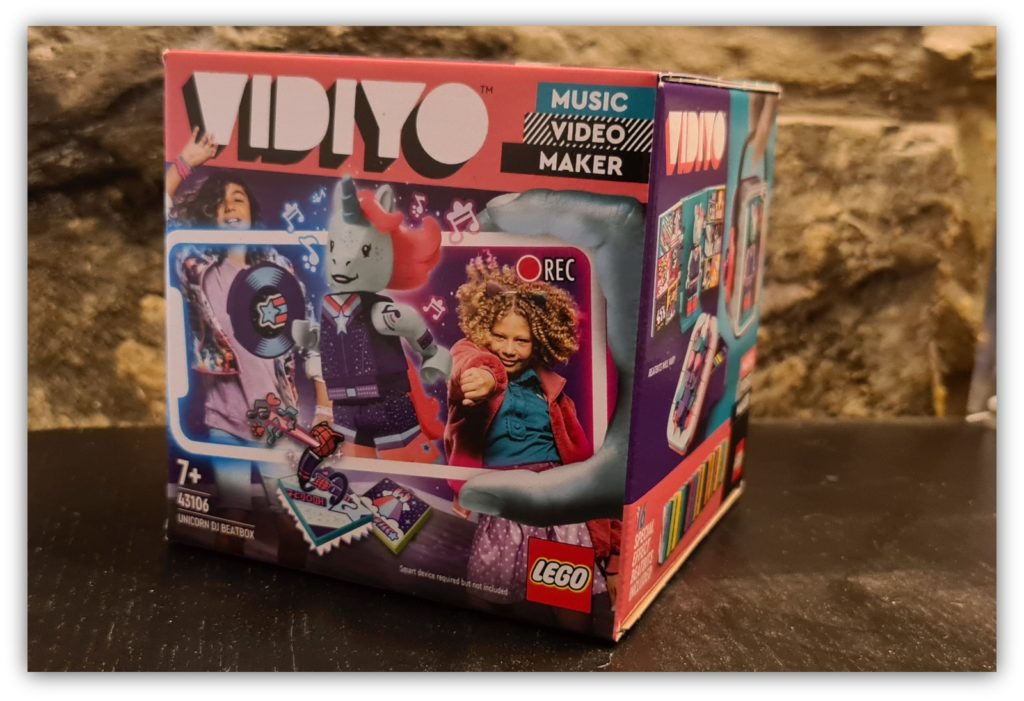 So, this is LEGO, so let’s take it out of the virtual digital world and into the real one. I bought two of the main LEGO VIDIYO DJ sets and a few of the collectible bandmates; so, I’m going to start with one of the DJ sets.

The box theming is a departure from the standard LEGO packaging and more like the L.O.L. Surprise Dolls series (I obviously spend a lot of time in the toy aisles!). Inside, there are two bags of bits and the parts to make the overall box set.

The build itself is effectively in three parts. Part one is the LEGO figure and the “brick wall”; part two is the mosaic back and part three is the case itself. Although a quite simple quick build I did feel that the instructions weren’t as comprehensive as I would have liked; in trying to keep it like the box images it seemed a little rushed. By that I meant that the build for the back was just a few images instead of the usual ten.

However, I did like the finished result; it was also nice that the instructions showed alternate mosaic patterns if you wanted to do something else.

The LEGO VIDIYO figures are quite fun; the two walls either side are the beat bits and effects; when you load your figure into the app (you must line all this up) it recognises the various tiles, and you can use them in your next video.  The set comes with sixteen random tiles, so you can swap them around. 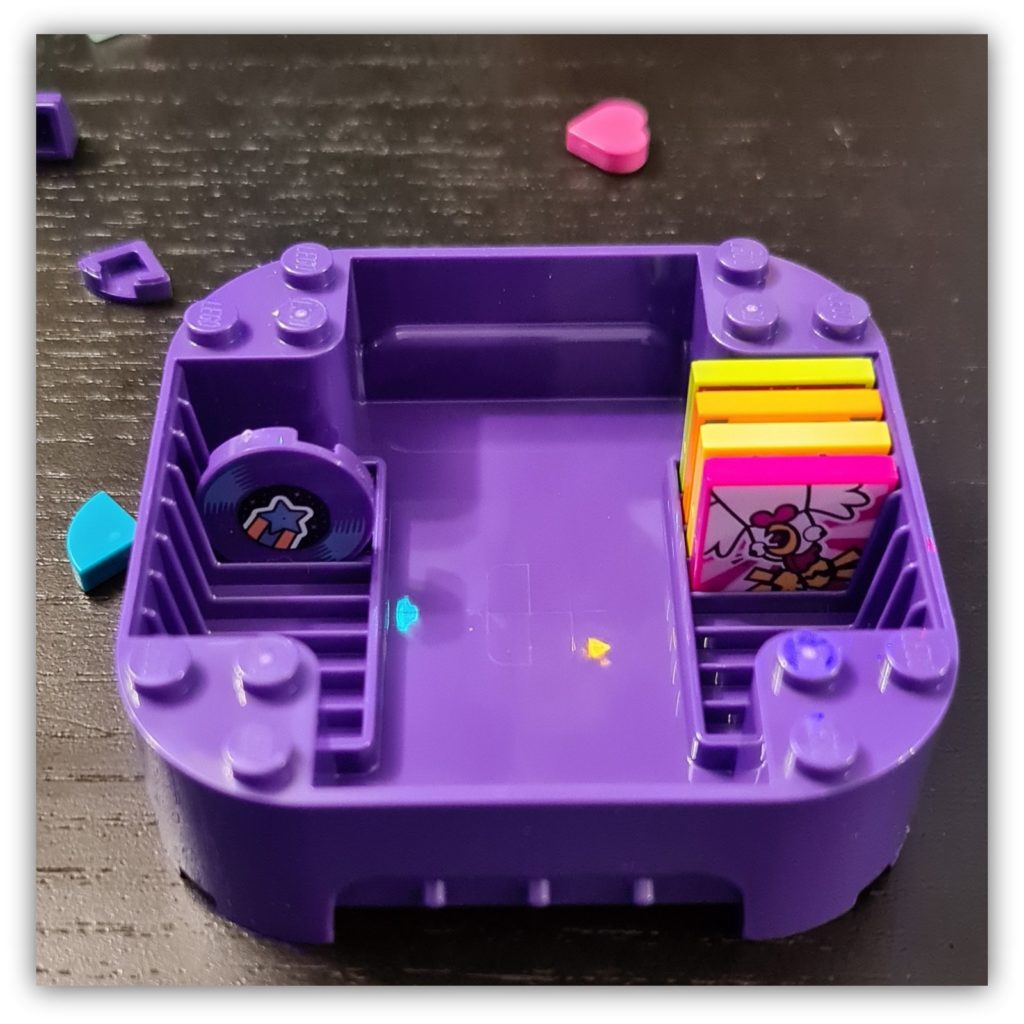 Behind the figure and the wall is this container box that I feel could be a great LEGO hot tub (note to self to make the MOC!!) but it also has an area so you can store more of the tiles and I suspect other bandmates too. 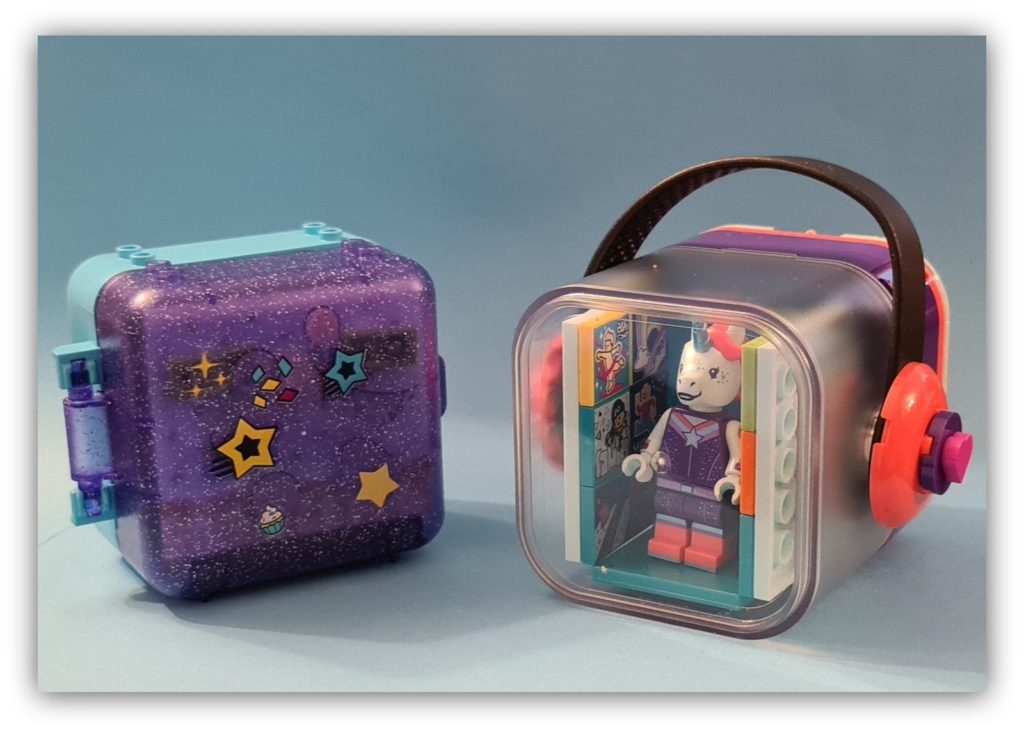 Once you have played with all your video clips, what could be better than to keep them all in one location? Over the last few years LEGO have released several unusual types of pods; for me the square ones from the Friends theme have been fantastic for transporting sets. I’m in two minds for the LEGO Vidiyo boxes; I love the curved nature and the clear front, but they aren’t stackable like the cube pods and the handle does not fold as flat as I would have liked. 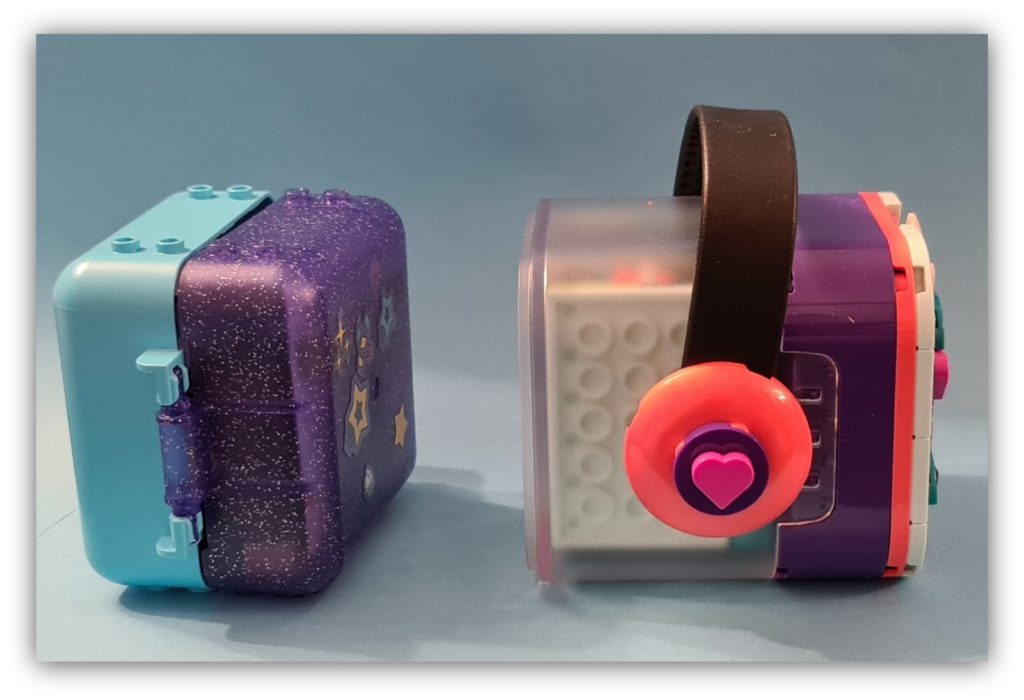 As can be seen, the Vidiyo boxes are twice the depth too, so these are certainly something that will take up room on the shelf. But you do need that “wall of sound” and the figure plinth for the app to scan the figures in. 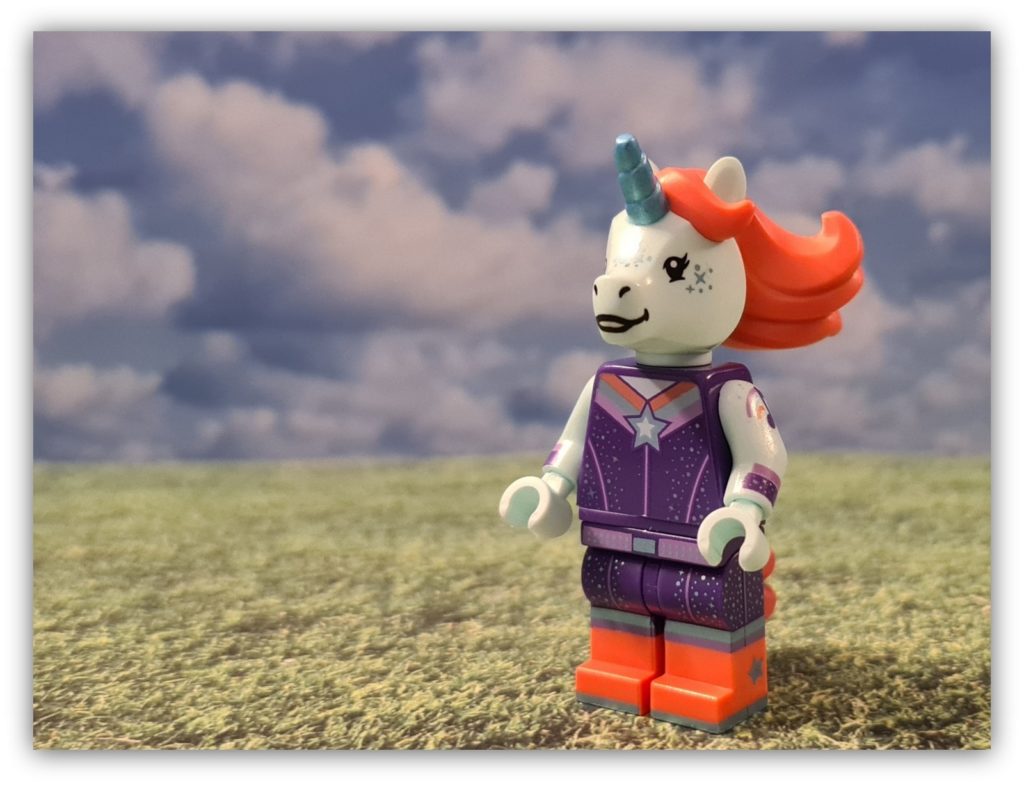 We’ve talked about the boxes and the app, but let us look at the figures. In the main sets you can choose your figures. I chose the Unicorn DJ (because who doesn’t love unicorns?) and the Alien DJ. Each has a particular music style, so:

But that’s not all. There are also twelve LEGO VIDIYO “bandmates”; these come in a blind box

(so effectively are their own CMF series) to add to your collection and have three beatbox tiles.

However, whilst these figures are cool, there is a concerning aspect regarding their packaging. Unlike previous collectible figures, these don’t come in a bag, but in a hard cardboard box.

This means you can’t feel for the particular figure you might want (say, the shark or the cat) but just have to hope that you don’t get one you don’t want. For the occasional purchaser that’s not necessarily a problem, but completists will have to go to the second-hand market to avoid getting doubles.

The concern amongst AFOLs is that this could be how the next series of Collectible Minifigures will be released; personally, I hope not. Whilst I can see how it’s more ecologically sound (cardboard over plastic and foil) and probably easier to package, I can’t but help think that this could have a negative impact on collectors.

Ultimately though, is it worth it? Well, you need the figures to be able to scan them into the app, but once there you don’t have any real need for them. This is not unlike the LEGO Dimensions game; we ended up writing on the disks and putting the figures elsewhere.

However, I do like the image tiles. I understand that many are adaptions of actual album covers which is quite nerdy, but as many move to streaming and playlists rather than playing an album from start to end I wonder how much might go over players heads. It certainly went over mine.

I also like the cases. I suspect I will use them not as they were intended, but then I also plan to use the figures outside the app too.

But it’s a fun theme and has the potential to interest some people into making their own music videos. OK, let’s rock; or at least, after we’ve relaxed in the hot tub…! 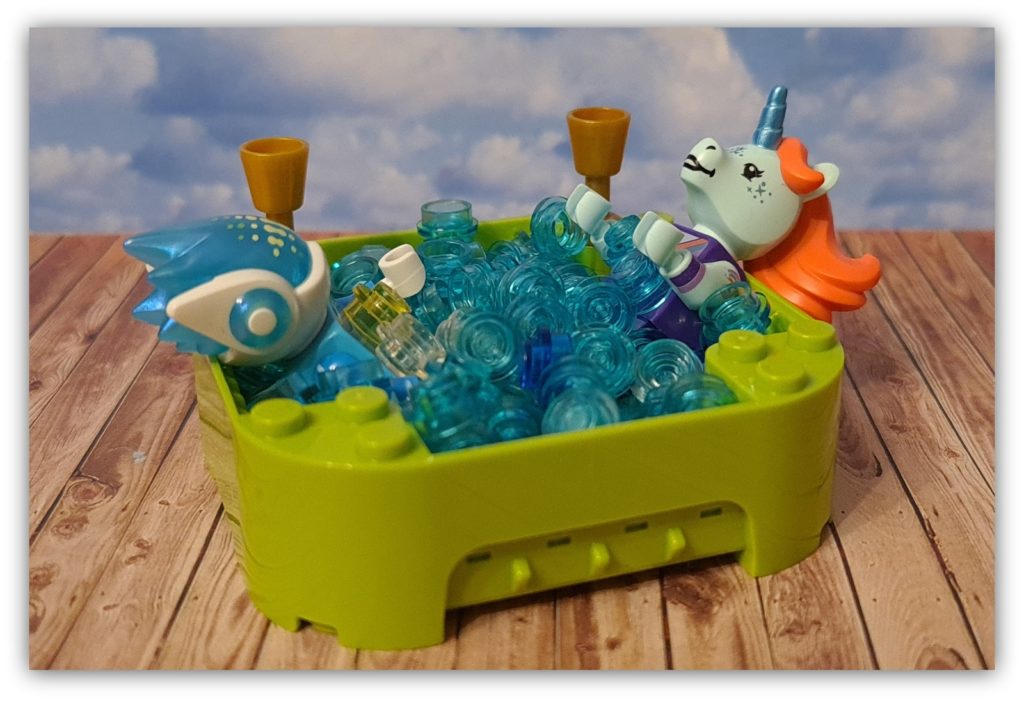 PS: Throughout this article I’ve used lines from songs, such as the title which came from the song I got the music in me by the Kiki Dee Band.

The LEGO Movie 2: A Review