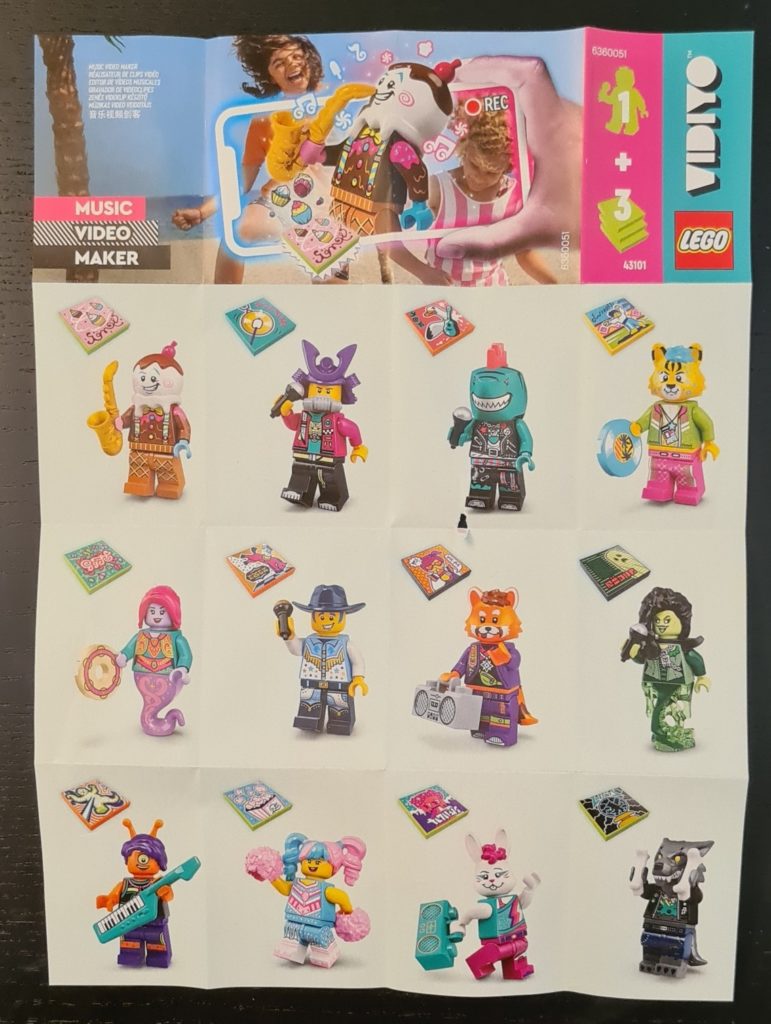 And with another opportunity to use classic song lyrics as headings, this time we’re looking at the other part to the LEGO VIDIYO theme, that of the collectible Bandmates. There are twelve figures in Series 1, and each comes with three BeatBits to use in the app.

For information on the app itself and the BeatBoxes, head over to this article. Even so, I will make references to the app in this article as well.

And you’ll be doing the boxer beat (Boxer Beat, JoBoxers) 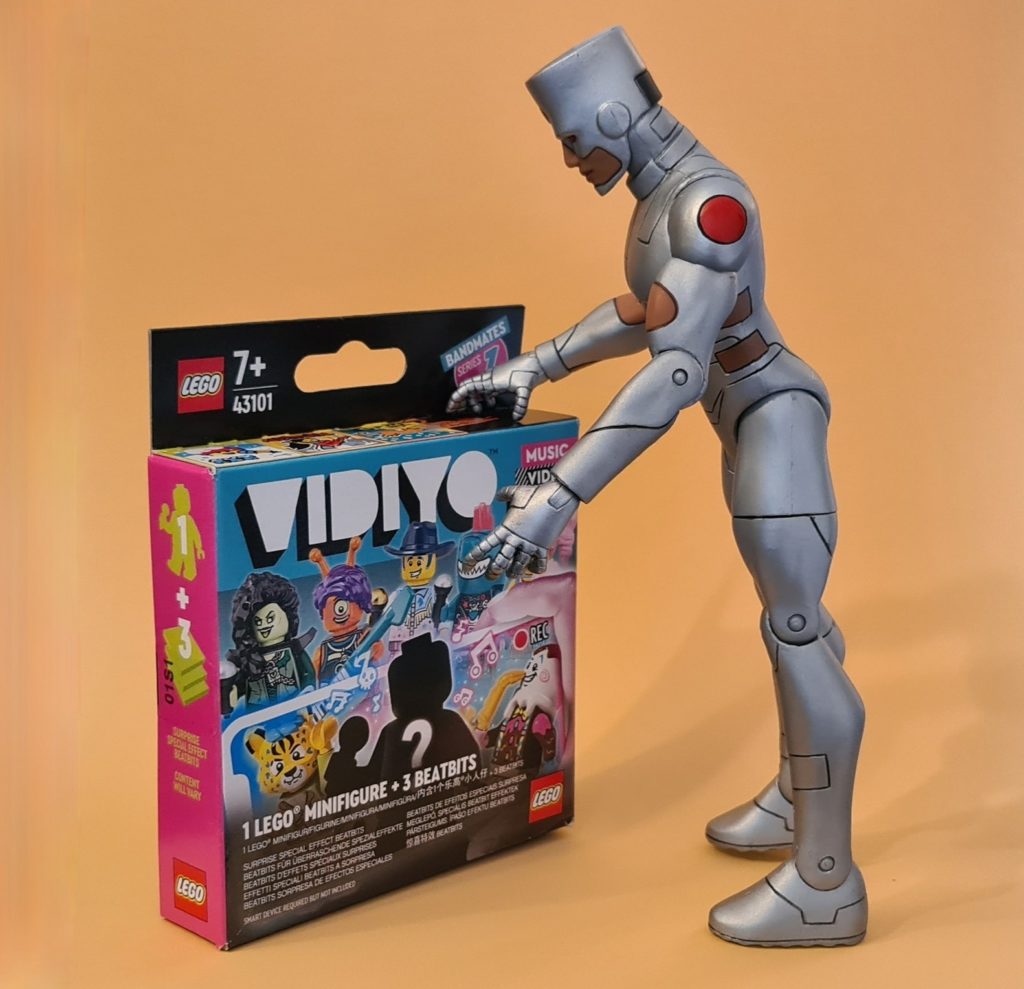 So, let’s deal with the proverbial elephant in the room. The LEGO VIDIYO Bandmates come in a cardboard box, so you can’t tell what figure you’re going to get. I bought four figures, and I got a double. However, the contents are a little more complex than that. Each Bandmate comes with three BeatBits; my research (of four figures) is that there is a BeatBits tile for a specific figure, then two random tiles.

Whilst it no doubt adds to the “fun” (from a marketing perspective) I’m not sure it adds to the pocket money fun of the consumer. I’m sure by now serious collectors have bought a complete box and have worked out the distribution spread; I’m going to wait until the second-hand market has opened to get the additional figures I want. 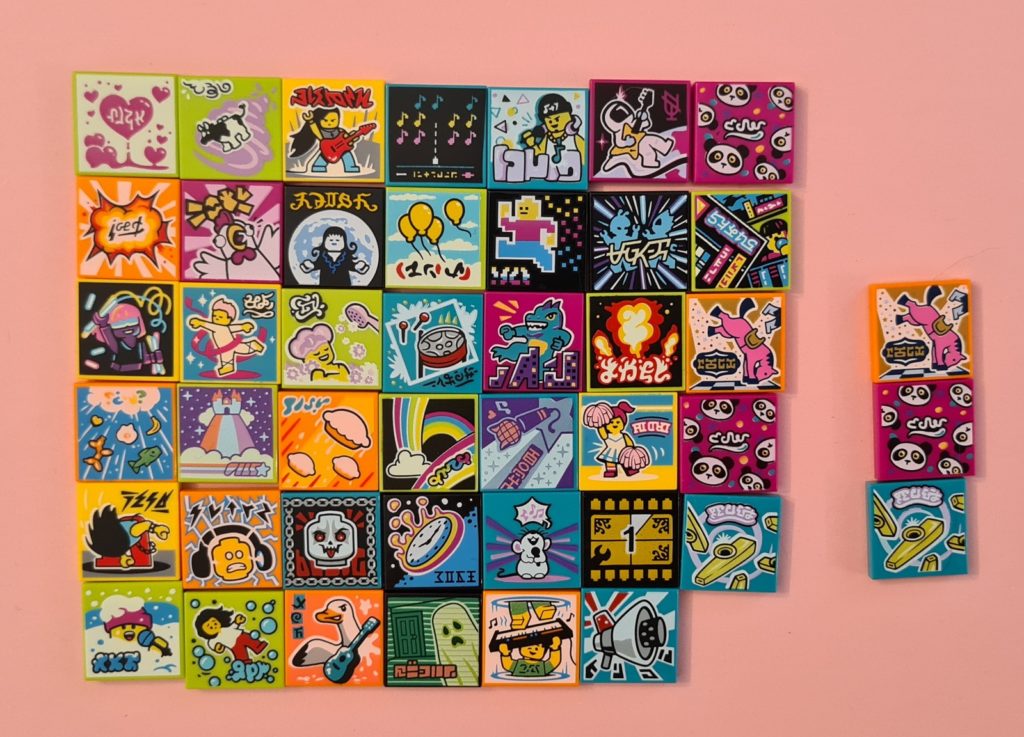 Before we look at the LEGO VIDIYO Bandmates themselves, there is another part to these sets worth discussing; the BeatBits tiles. There are 104 BeatBits to collect (at the moment) and they appear to almost randomly spread across the BeatBoxes and Bandmates. These tiles fall under six categories:

I read somewhere that some of the BeatBits designs are versions of popular albums; I’ll admit that I’ve looked at them and I can’t work them out; I’ve assumed that they aren’t rock or goth album covers from the 1980s!

Once you’ve scanned them into your VIDIYO app, you can go to the “Scan” function to see all the BeatBits; the tiles you have scanned are shown with a pink box around them. What you can also do is click on the tile, and there is an option to allow you to see an example of it in action.

Please allow me to introduce myself (Sympathy for the Devil, The Rolling Stones) 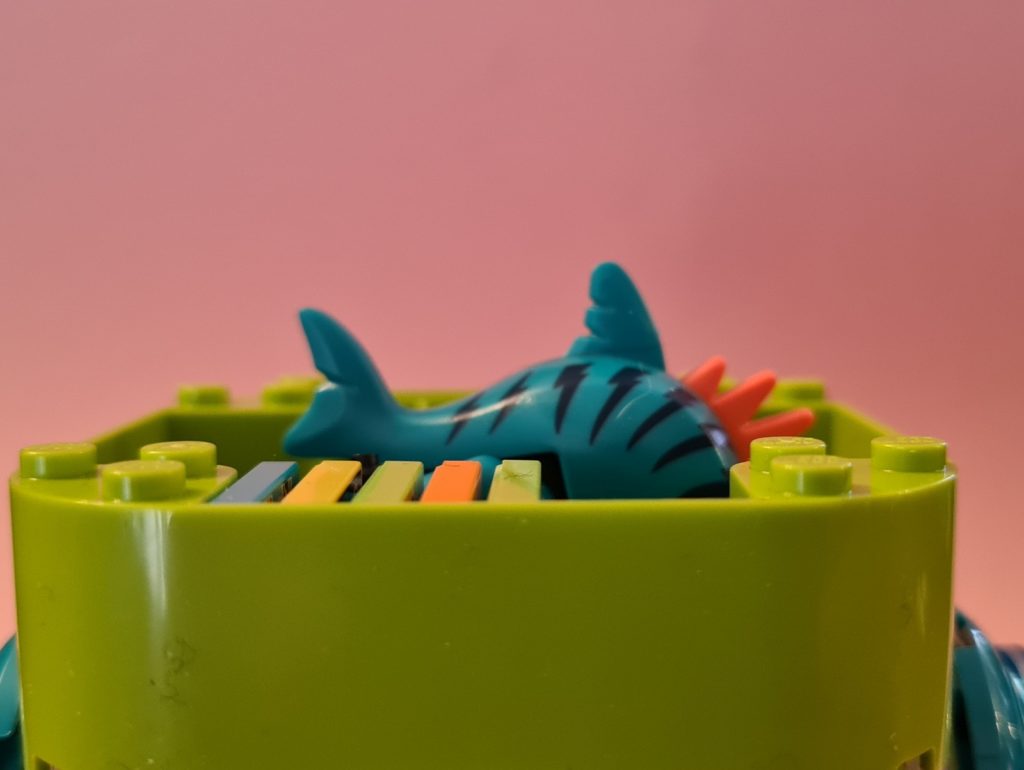 In my previous article, I mentioned how I thought the back of the BeatBox could be used to store a Bandmate or two as well as the BeatBits. That’s not wholly accurate; I’m sure you could fit a Bandmate, but it would have to be the right one and probably broken down into parts; as you can see from the image above I had problems fitting the Shark Singer and to paraphrase a certain (relevant) film from the 1970s, “We’re going to need a bigger box!” 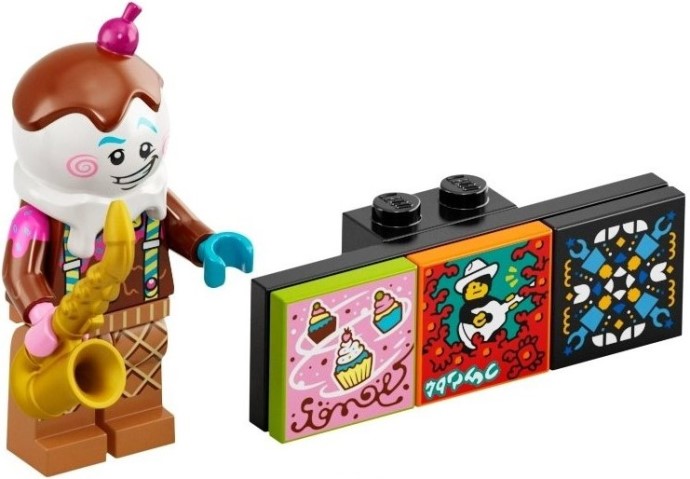 Apparently just as skilled as Epic Sax Guy, I love the head and printing that this figure has! I can see the head being used in summer-related images, with the rest of the outfit being perfect with the gingerbread head for Christmas! 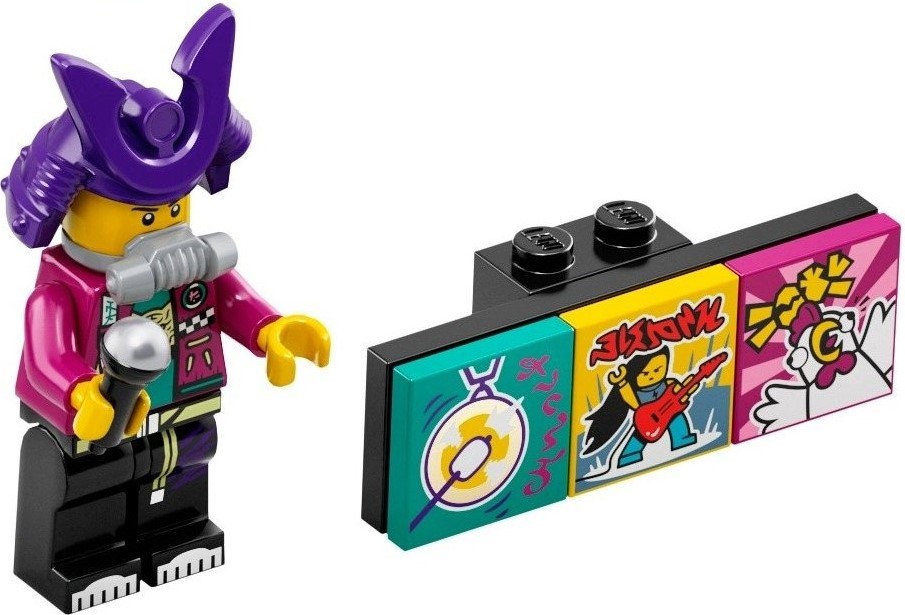 The cyborg mask is pretty cool, and I think the headpiece is a new colour, but the rest of the outfit looks OK-ish. I think the T-shirt has the face of DJ Cheetah! 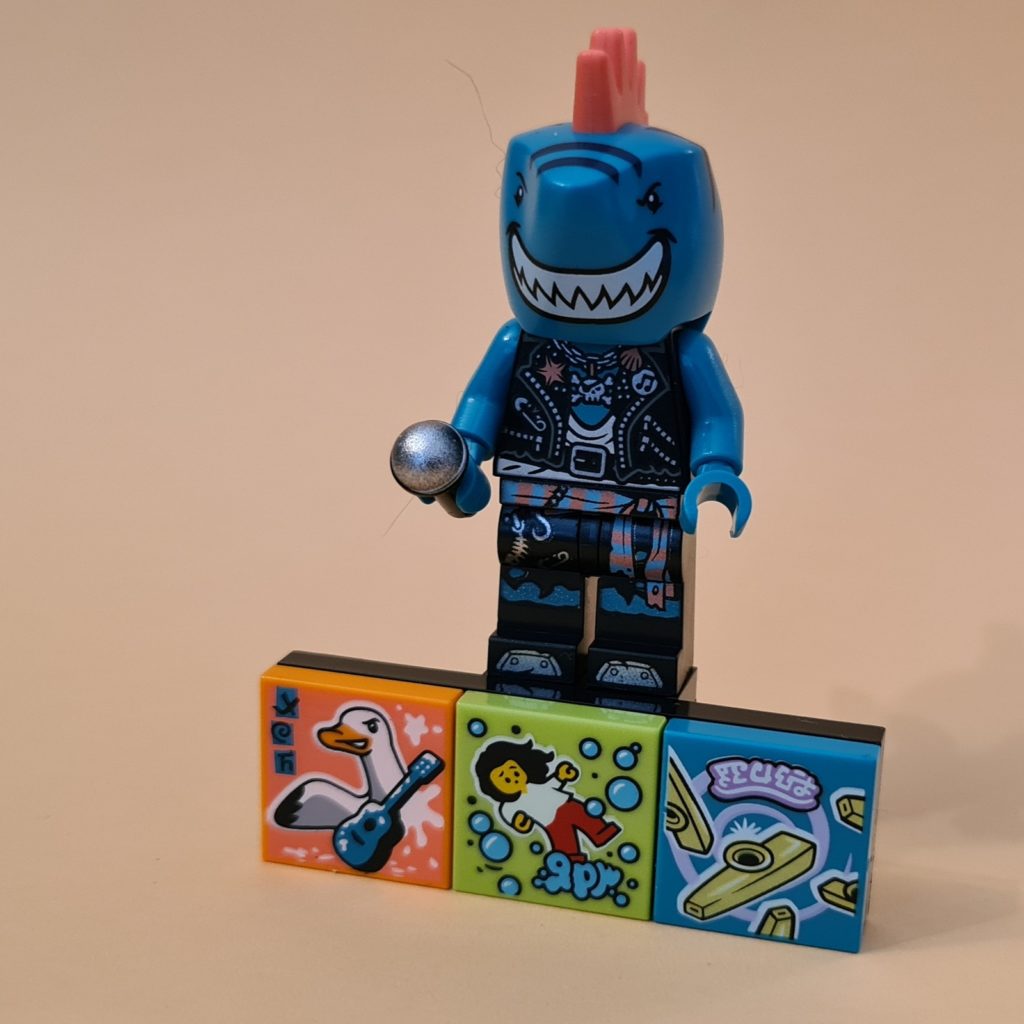 The LEGO VIDIYO app notes that the shark singer is girl; a subtle thing perhaps, but I’m pleased then that LEGO didn’t do the “tiny waist shadow effect” that they do with most female minifigures. Being a punk outfit, it’s unisex and looks cool. I can also confirm that the head piece extends down the back of the figure! 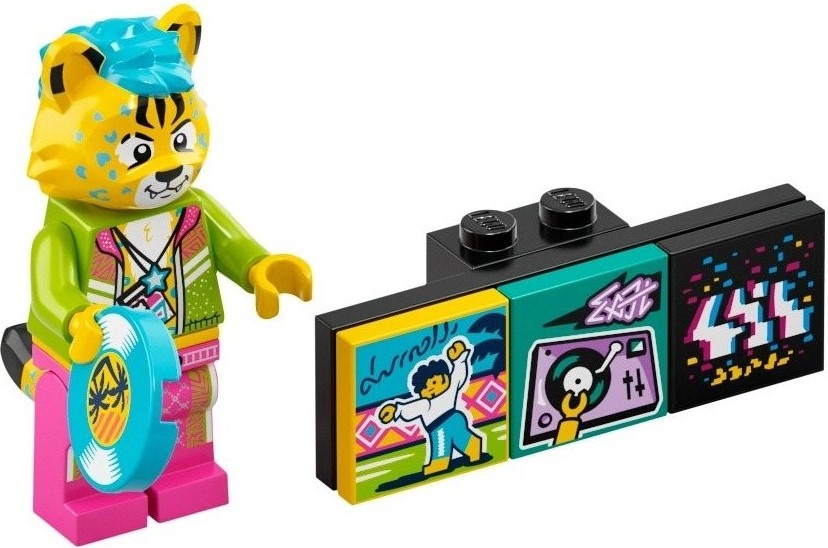 This figures accessory is a record, which is nice. The 1990s neon tracksuit is perfect for those throwback tropical sounds and look; he has the all-important VIP pass! Not too sure about the blue hair/hat though! 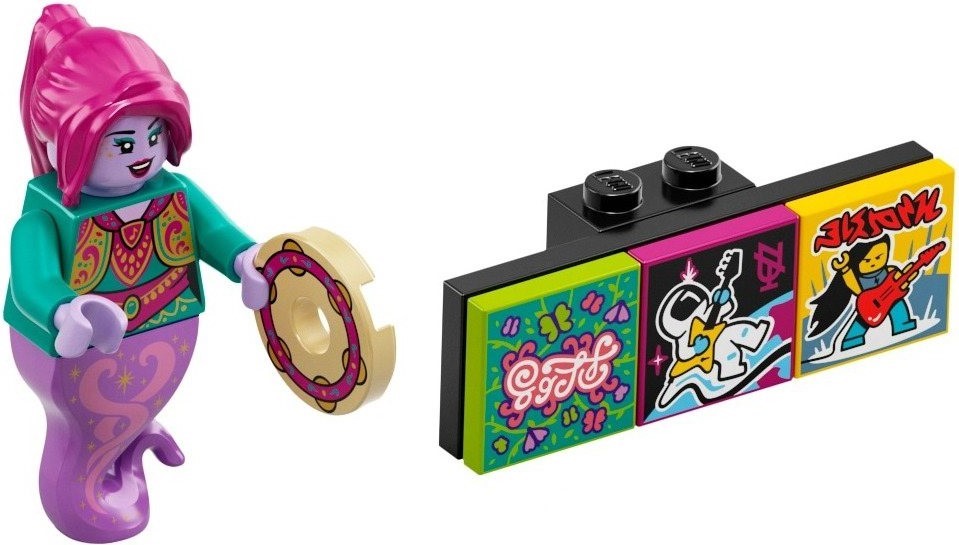 What’s always sure to get you into the groove is a dancer to encourage you to strut your stuff! Of course, strutting could be a challenge when you’re partly wispy air, so it’s a good job she has a tambourine to shake to keep time with! 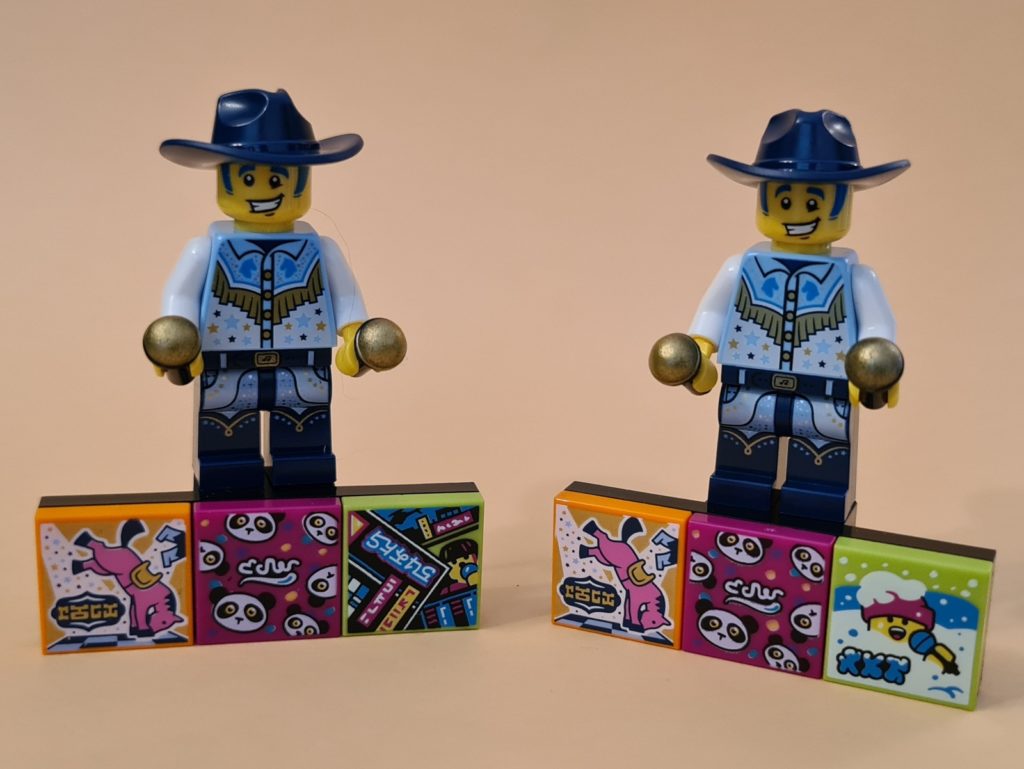 Just when you need something for those boot scootin’ boogies this guy can sing both types of music – country AND western! Luckily for me, I was able to get two of these figures because now I can barn dance my little heart out! I love the fact that they added tassels to his shirt and that his boots match his shirt in terms of colour! Yee-hah! 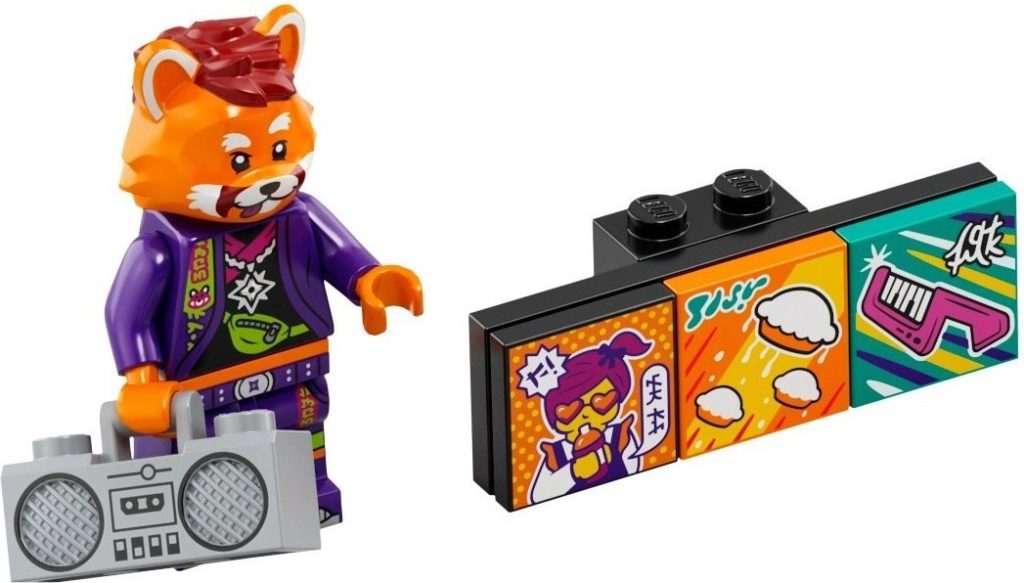 I was already with the “what did the Fox say” line when I read that this was a Red Panda. I still suspect many will think this is a fox. Or even a cat – it’s the same head as DJ Cheetah. But with a rather natty purple outfit (complete with a small waist bag across his tummy) there’s certainly a Hip Hop style to this dude! 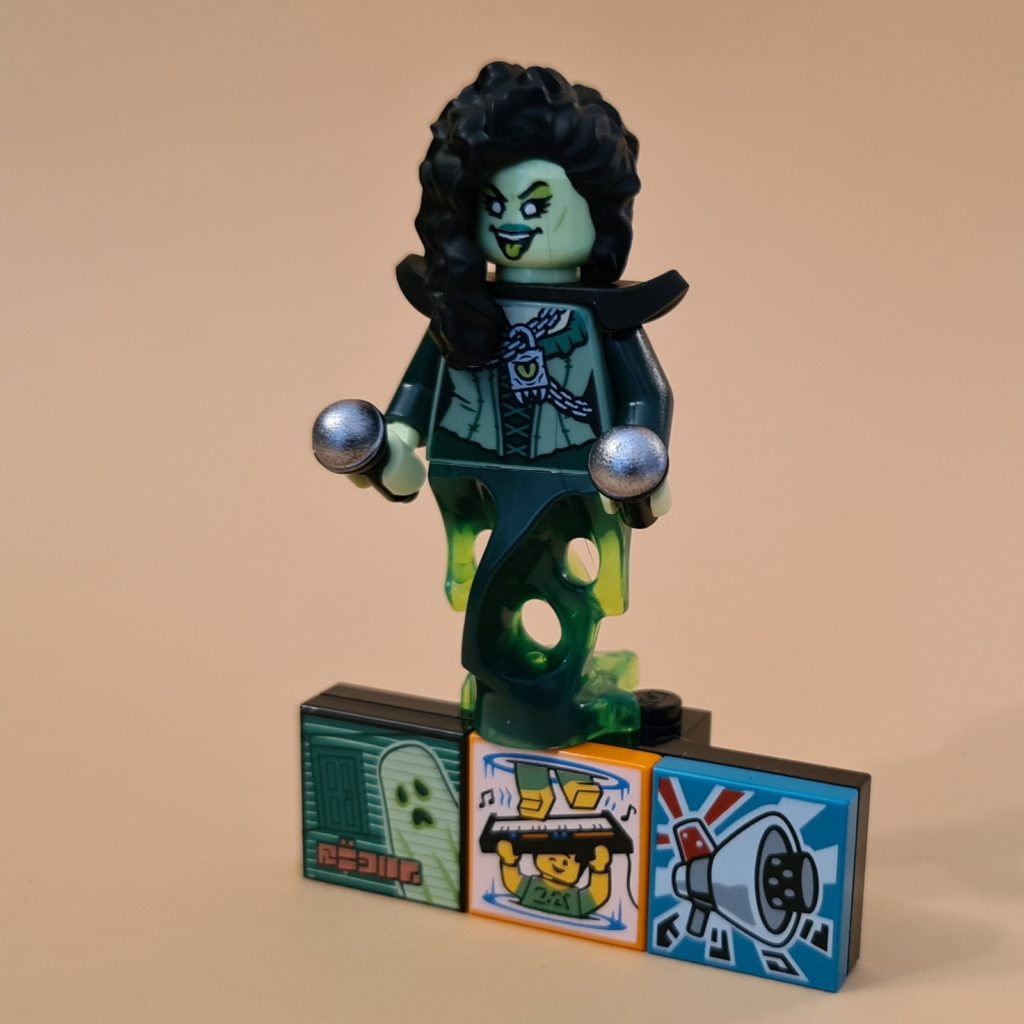 So, we have our second ethereal figure in the series! According to the VIDIYO database, “her rage-filled melodic wail will make the small hairs on the back of your neck stand up and the black roses of metal blossom in your heart”. I’m going to assume they went with Heavy Rock rather than the potentially more appropriate goth; although having played the snippets from the VIDIYO music vault, there’s not really any metal or goth available for her to sing to. 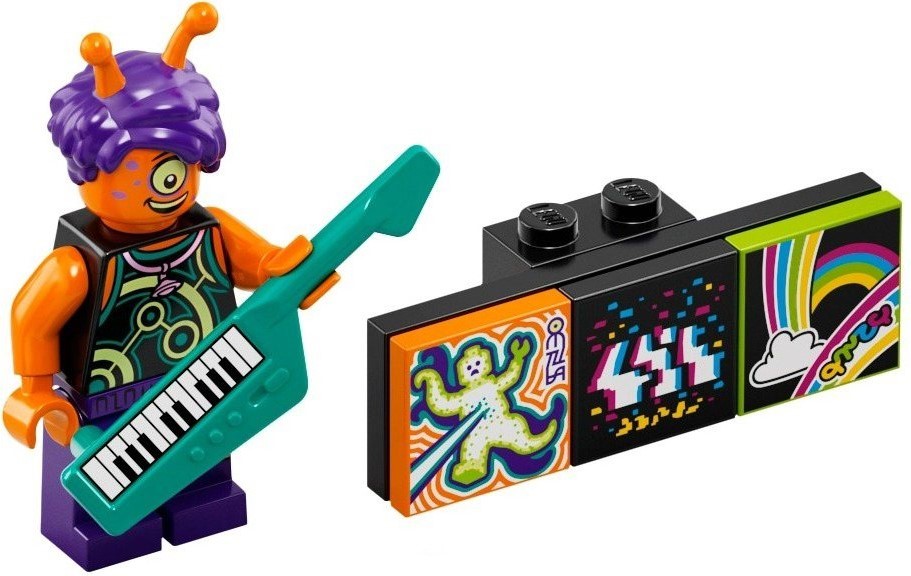 I suspect that this figure will be one of the more popular Bandmates for collectors; as well as the very cool head and hair, the figure also has a lovely basketball printed torso and legs. The keytar also corrects a fundamental flaw in the printing of the keytar in Series 20. In that version, the keyboard is printed the wrong way around; the black keys should be away from the edge of the keyboard! 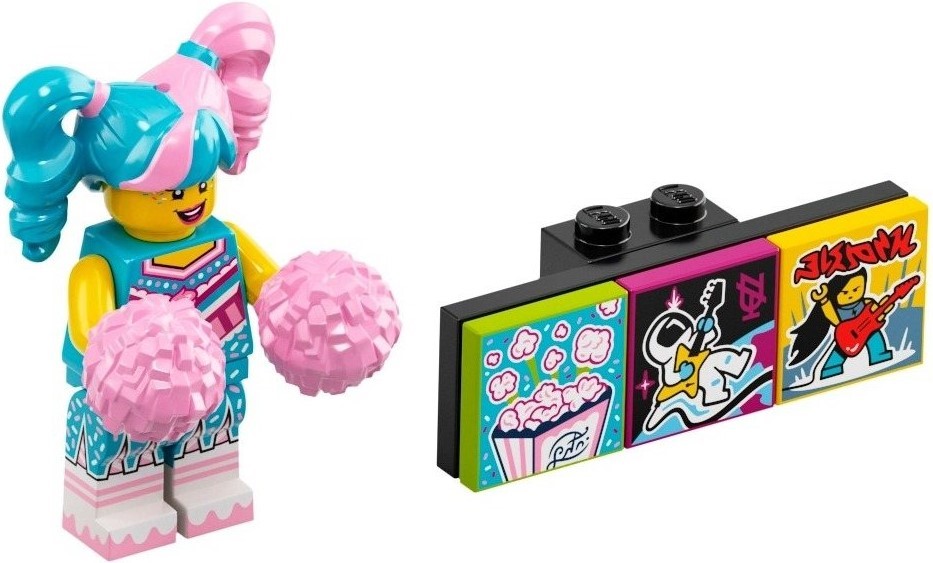 I can’t help but think that LEGO just recycled the N-POP Girl from the Ninjago movie! However, I have checked and there are differences; OK some are subtle, but here you go. Firstly, whilst the hair is the same shape the colours are reversed. Our cheerleader also has more freckles and a wider smile. The pink pompoms are a nice colour match to the outfit. 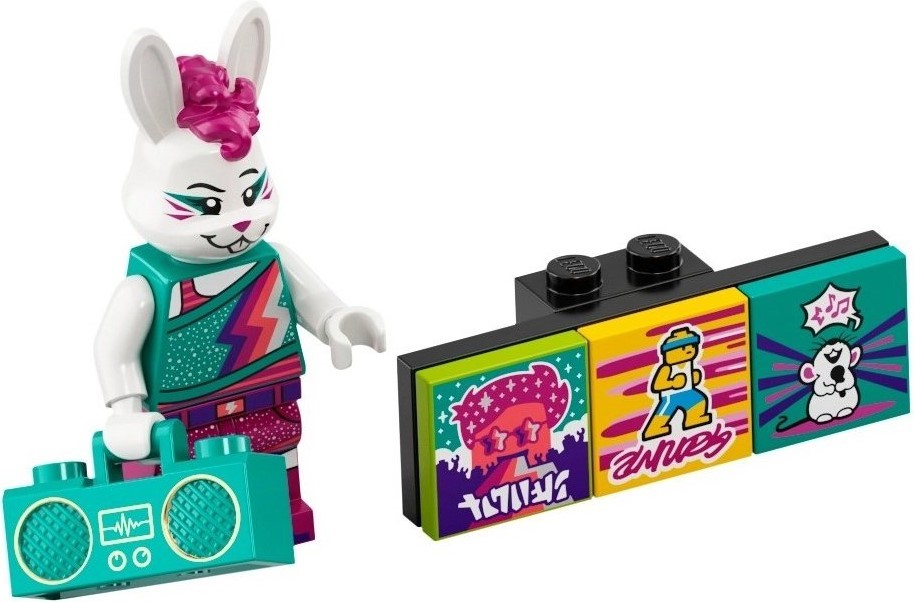 I think that this figure will also be a popular bandmate! According to the VIDIYO database, “Bunny Dancer was once crowned cutest in genre by K-Pawp Magazine”. I think LEGO could have got away with retaining the N-Pop genre here rather than introducing another, but there’s probably some commercial implications. Bunny Dancer has some very 1980s get up, with the very baggy sweatshirt and angular eye makeup. 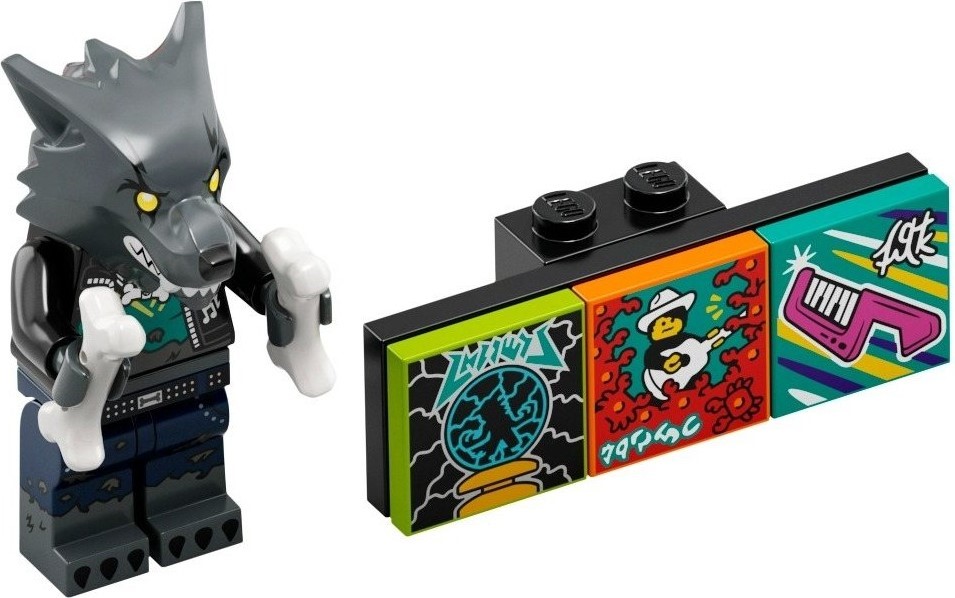 Our last figure in the LEGO VIDIYO Bandmates line-up is the werewolf. Again, that head looks familiar, but again not exactly. The series 14 collectible minifigure had a grey head and black eyes, but this Bandmate has yellow, glowing eyes, ready to pounce on the drums (and I guess, miss the snare). I love the fact that they used rock jeans which he has ripped to reveal his claw feet. He also features two small bones; what better tools to use as drumsticks!

I can shine, like you shine (In the End, Rush)

I like the potential that LEGO VIDIYO has. There are a few things in the app that I’m less keen on, I do find it laggy and it keeps hanging on me; and I’m using quite a new device on a reasonable internet connection so I’m not sure what the problem is (but I think it’s in the coding). Given that the theme hinges around the success of the app means that any issues with it could cause a problem.

I’m hoping that if there is a second series of VIDIYO Bandmates that LEGO will go back to the bags; I can’t think that there is probably a lot of potential to transport more figures in less space than by using harder cardboard boxes, plus it means that collectors have a better chance of getting their choice figures from the start.