For as long as LEGO have been making houses, police stations, fire engines and trains, LEGO fans have been building their own cities. The advent of YouTube, Flickr and Instagram however has meant that people are able to share their cities with the world on a hitherto unprecedented scale. You could say that between every Instagram account sharing their Brickville, Bricktown, New Brick City, Bricksburg etc, there’s an entire LEGO world of happy minifigures going about their lives, but one thing you will likely notice in most is a line of LEGO Creator Expert modular sets.

LEGO have been producing this series of high quality buildings – including a Detective’s Office, a restaurant, a bank and a cinema – for over a decade now, and they have become a fixture of so many amazing cities on AFOL and TFOL social media. Each one occupies one or one-and-a-half baseplates, is three stories tall, and absolutely jam-packed with incredible details: gumball machines, pool tables, even a minifigure’s own model city display!

It’s no surprise then that not only has this scale of LEGO building inspired a host of amazing, entirely custom creations, but has also spurred many builders to convert other LEGO sets not in the modular buildings series into modular buildings! Today, we’re going to look at some of the best sets to do exactly that with, to use other sets to give your LEGO city a bit of a different edge.

The LEGO City theme has been more adventurous in the past few years. Rather than just giving us waves of Police, Firefighters and Coast Guard on repeat, we’ve had all sorts of vehicles, subthemes, divers, jungle explorers, space programmes, and small buildings. I don’t know how well these sets do with LEGO’s largest core demographic (kids, obviously – it’s easy to forget that sometimes!) but I see a lot of AFOLs singing their praises. One set that captured AFOLs’ imaginations particularly well as 60008 Museum Break-In. While a Police set, it featured a small museum, which is what interests me for the purposes of this blog.

It’s not a huge building, but this tan-and-light-grey museum is on a 16×16 base – essentially a quarter of a modular building. It’s a single storey, just large enough for a few exhibits inside, a defensive laser grid (every good fictional museum has one) and a small, shaded courtyard in front. With its distinctive roof with skylight, museum signs and flags, even a plant creeping up one side, it’s bubbling with character already and screaming out for expansion.

Being that it is predominantly in tan and light bluish grey (or light “bley”) this would not be an expensive set to turn into a modular – it’s cheap and easy to get basic bricks in both of those colours. From there, you just need to decide what to fill your museum with. The set already boasts a golden dish, a LEGO-fied version of Vermeer’s “Girl with a Pearl Earring”, an ancient sword and a jewel, which make for a good start. Looking to other current themes, Ninjago and Monkie Kid both have plenty of gold weapons that could have belonged to a long-lost culture, while going back to older themes like Indiana Jones and Adventurers, there are plenty of idols, gemstones, pharaoh headresses and Arks of the Covenant to fill out your displays.

Keep the robber’s van built – a great way to add character to your city is with vehicles and mini-scenes, and having some looters attempting to rob the museum could be a lot of fun! 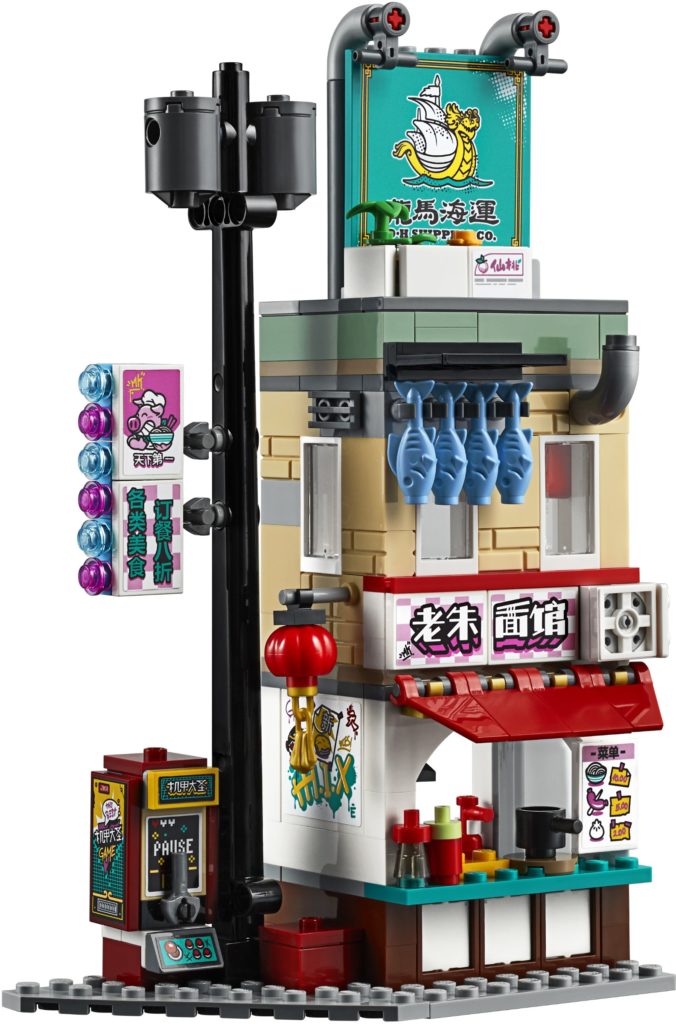 The new Monkie Kid theme has caused a stir for all kinds of reasons. Its blending of modern and classical Chinese themes, heavy use of drum-lacquered gold pieces and amazing minifigure designs are just some of the highlights of the first wave, but what I find personally quite striking is that 80011 Red Son’s Inferno Truck and 80012 Monkey King Warrior Mech both feature small buildings that are just crying out to be adapted into something…more. The former has a small Panda-themed convenience store, with some colourful stickers, a heavy teal-and-red colour scheme, and a gigantic panda sign that’s licking its lips. The latter is a two-storey noodle takeaway shop, with the restaurant on the ground floor and an employee’s lodgings above, not to mention a huge teal billboard.

On their own, these builds are quite small, but combine them and flesh them out with full floors and you’ve got the start of a Chinatown-themed modular! Have the takeaway and the Panda convenience store on the ground floor, the employee’s flat above, and who knows what else? That’s plenty of space to play with, and 80011 and 80012 both come with lots of great features, minifigures and accessories to get the ball rolling. Maybe a training room with Monkie Kid and Mei to prepare for their next battle? A secret base for Red Son and the bull warriors? 80012 also has an arcade machine – maybe the prized possession for the Monkie Kid’s apartment?

And of course, to top it all off, the billboard for the roof! 80012 also has a small peach tree, so perhaps your Chinatown modular could also have a small roof garden.

Now, if you’re at all active on Instagram and following AFOLs who build their own cities, you have likely seen many builders already have a go at adapting 21319 Central Perk, the LEGO Ideas set based on classic late 1990s/early 2000s US sitcom Friends. The set itself is designed to look like an actual studio set, as the real Central Perk would have been built. It’s actually a fantastic representation of the real thing, filled with accurate details and easter eggs that fans of the show will love, so no wonder people have been rebuilding it from a studio set into a building. The box and promo art even suggests it, to a degree, with a shot of Phoebe outside the Central Perk’s windows, playing her guitar for passing New Yorkers.

Because of the shape of the 21319, turning it into a modular building is actually a little bit of a challenge. The front window and double doors are on three smaller, intersecting, oddly-angled walls, which perfectly represent the shape of the show’s location but make it a nightmare when you try to adapt it into a modular building. Instagram user lookatbricks appears to have rebuilt the Central Perk from the ground up in order to get a workable shape, which is less accurate to the show but fits onto a baseplate with as few non-right-angles as possible. By contrast, allyouneedisbricks has kept the shape of the original set, and used a system of tiles and odd studs to rest it onto a baseplate at a series of angles. You’ll have to choose a method that works best for you.

But what should go above it? Well, most LEGO modular sets have three levels, but surely at least one of them should be Monica and Rachel’s apartment! In fact, allyouneedisbricks has been doing just that, and I think their version of this build really exemplifies just how well a real location can translate to LEGO. While it’s a slow process, their Instagram feed is full of mini-builds capturing tiny details from Monica and Rachel’s apartment, and I would highly recommend checking out their work.

That still leaves a little bit of space – why not add Joey and Chandler’s apartment on one floor? And though very little happens on rooftops in Friends, what about including scenes from other sitcoms? A certain Halloween party from How I Met Your Mother comes to mind. It’s your city – you can put whatever you want into it, including mixing shows together!

So even if you’ve bought the whole wave of LEGO modular sets, there’s plenty you can do to fill the gaps in your layout. I’ve mentioned four LEGO sets that could be adapted into modular buildings, but that’s to say nothing of pulling entirely new designs straight from your imagination too. Sometimes you just have to get building, whether you have a Central Perk or takeaway shop as a frame of reference, or no reference at all. I hope this blog has been useful to you – let me know if there are any sets you think should have been on this list, and I’ll speak to you again soon! 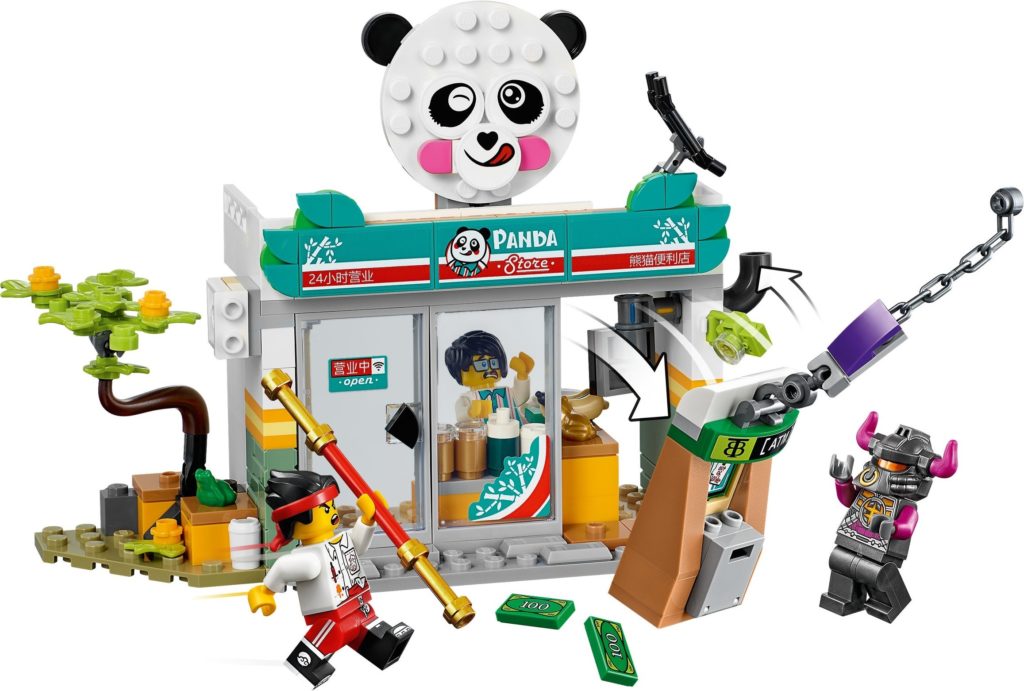