Welcome back, ladies and gentlefigs, to Myths and Minifigs! This time, we are going to be trading in our gorgons and our cryptids, and taking a trip to a part of the world that often gets ignored when it comes to the dizzying heights of fantasy. I’m quite sure that if I were to ask you to name a fantasy being from the Middle East, you would only have one answer for me: a djinn, better known as a genie. And today, we’ll be looking at LEGO Genies!

Like most myths, the history of the genie legend is a far cry from today’s imagery. Ask a master of Islamic theology from a thousand years ago how many wishes a genie would grant you, and they might think you were mad. While it’s hard to say with absolute certainty, the genie, or djinn, first appeared in ancient stories in pre-Islamic Arabia, and was essentially a term for any kind of supernatural being. Usually these were elementals, and they were often malevolent. For every time they offered inspiration to a mortal poet, they might also spread disease through your village or send your family insane. Fun to be around, for sure.

Over time, djinn started to be seen as their own thing, and took on more demonic traits, being both tricksters to foolish mortals, and ancient enemies to the angels of God. While supernatural, they were a society living alongside that of humanity, crossing over to cause mayhem or possess the weak from time to time but otherwise living their own lives. It wasn’t until One Thousand and One Nights, an 18th century English collection of Middle Eastern fables, that the djinn became the genie, and started to take on the shape we know today – ever heard of Aladdin?

Young thief trapped in a magic cave by an evil sorcerer? Check.
Lamp holding a genie who grants three wishes to the lamp’s owner? Check.
Genie helps the thief escape, fight the sorcerer and win the girl? Triple-check. 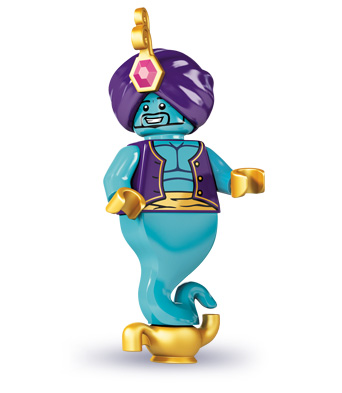 LEGO’s first attempt at a genie in 2012, in 8827 Collectible Minifigures Series 6, was as standard an image of a genie as you could possibly make, but all the better for being instantly recognisable. With his blue skin, strange cloudy lower half in place of legs, and enthusiastic smile, he was Disney’s version of the Genie from the 1992 animated classic Aladdin, but without treading into the murky waters of copyright infringement.

There are some stark differences, like this Genie’s purple tunic and turban, and the little pink, gold-trimmed jewel stuck into the turban. It’s a very nice touch; minifigure ‘decor’ elements this small have existed for years, predominantly in themes like Friends, but employing it here to give the Genie a little flamboyant edge is a creative detail that really adds character to an already excellent minifig.

Personally, having a blue-but-otherwise-normal face has come in quite handy for creating custom characters. Usually, when LEGO makes a primary colour minifigure face, it tends to have inhuman traits, like vampire fangs or scales or bug eyes, so having a smiley, bearded face – much like any City minifig would have – is useful indeed. To date, I’ve used his face for a cloud-dwelling elf, a Luphomoid (remember Nebula from Avengers: Endgame? Her species!), and even a little minifig cosplayer! What I’m trying to point out is that minifigures like these, no matter how exotic and esoteric they might first seem, can have really useful pieces in them, so it pays to be on the lookout for new and innovative parts to use!

I Dream of Minifigs 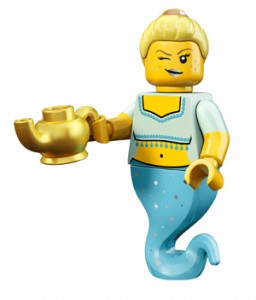 For a twenty-something like me, I Dream of Jeannie only exists as an artefact of a bygone generation, running from 1965 to 1970 (my parents were toddlers!) but it’s had enough of a cultural impact – and left enough of a footprint on genie lore – that the eponymous Jeannie got her own minifigure, in every way but name (and license agreement). She is a clear female counterpart to LEGO’s first genie, this time with regular yellow minifigure skin, a tied-back blonde ponytail, a sparkly blue tail and a cheeky wink. Like her male predecessor, she appeared as a blind bag, in 71007 Collectible Minifigures Series 12.

Jeannie is LEGO’s only foray into “urban” genies: that is, stories where someone in the present day finds a magic lamp. It has become more of a trope in monster-of-the-week TV shows or children’s books, or the hero to find a lamp in an antique store, theatre prop cupboard, or school storage room, and I Dream of Jeannie – where the genie’s master, played by Larry Hagman (anyone remember “who shot J.R.?”) is an astronaut and Air Force pilot – is one of the highest-profile stories of this kind.

Dark Side of the Lamp 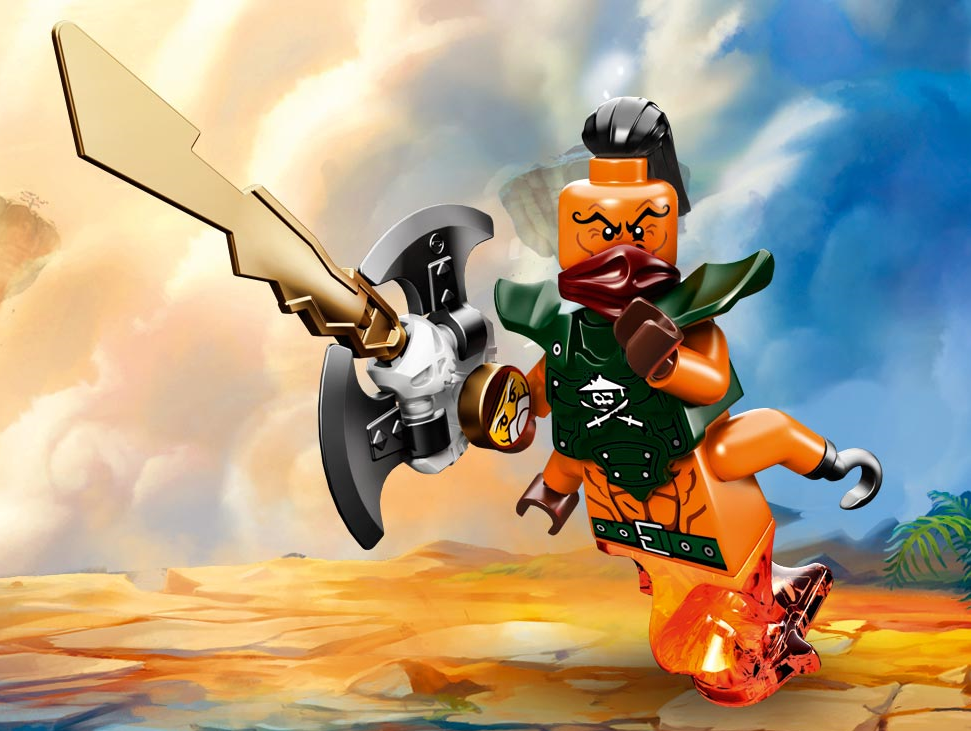 You need to be careful what you wish for, with some genies. Wish for eternal beauty and you could end up a statue forever. Wish to fit in and you might be turned into a tree. Wish to be rich and your parents might die so you can inherit their money. Yes, ladies and gentlefigs, we have an evil genie on this list: Nadakhan from Ninjago’s Skybound storyline. Leader of the Sky Pirates, Nadakhan was banished to magic lamp by a rival pirate captain. Nadakhan is the most different of the LEGO genies made, more sinister and imposing than the others, and with dramatically different pieces used.

He has four arms instead of two, using a similar “upper-upper torso” element seen on previous Ninjago villain Lord Garmadon, giving him more hands to hold more frightening weapons, including a sword with a skull-shaped hilt and a blade made of fire. The standard genie “cloud-legs” are replaces by a newer version (seen since on ghouls, Dementors and banshees) which seems like a roiling pillar of fire, far more aggressive than Nadakhan’s plastic predecessors…an aggression that fits his actions throughout the series. Nadakhan “deletes” Pixal, Zane’s close AI companion; at one stage turns all the ninjas bar Jay into gold statues for his palace; and resurrects his long-dead lover into Nya’s body.

It’s quite nice to have a genie among the lot who is such a departure from the rest, not only highlighting the darker aspects of the myth (remember what I said before about the “enemies of angels?”) but giving us another, innovative set of elements to work with. He’s also a stark contrast to our final LEGO genie, one which I’ve spent the article skirting around but which you’ve likely already guessed. 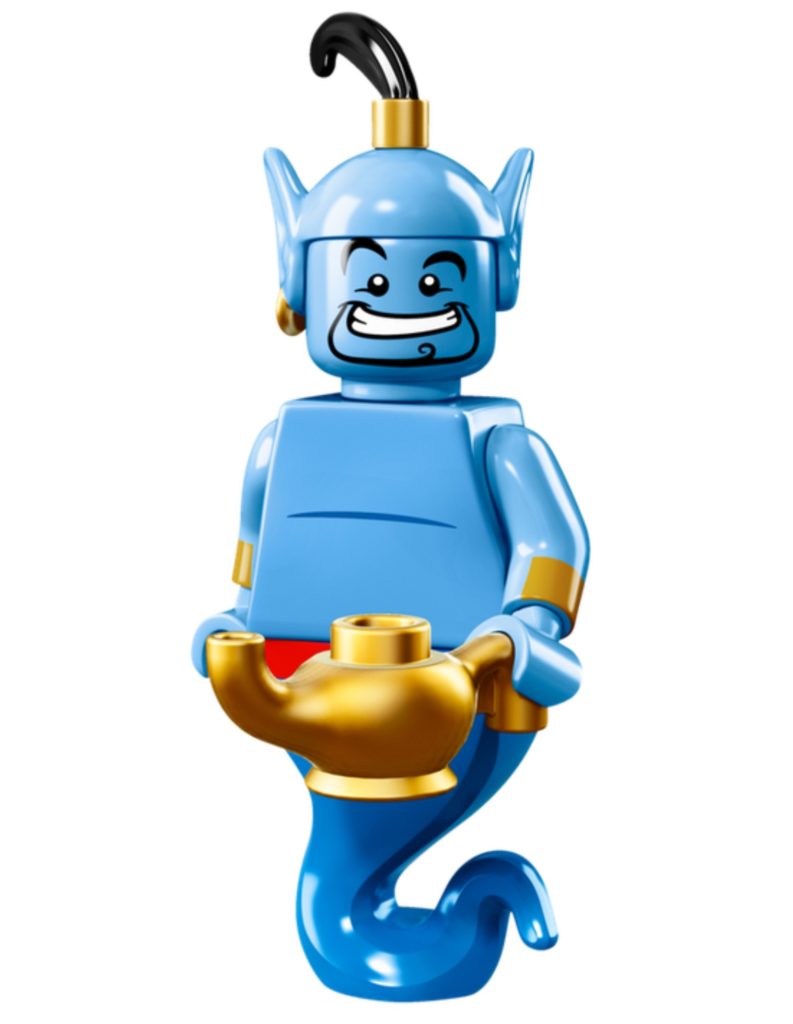 You’re probably already familiar with the Genie from Disney’s Aladdin, who holds such a place of high regard in the hearts of generations of children and adults alike. Played in the film by the late Robin Williams, this figure from the 71012 Collectible Minifigure Disney series in 2016 is instantly recognisable as the bar by which most modern genies are identified. Indeed, the first genie in this article is, as I said before, an attempt to capture the spirit of the Disney character without treading on hallowed, legal ground.

Blue skin, cloud legs, and a huge beaming smile are the key characters captured here in a pretty perfect likeness. The only real downside to the minifigure is, being static, he cannot quite capture the amorphous, shapeshifting nature of the animated Genie that is a key part of his character: he’s a real fidget and can’t stand, or float, still!

Nonetheless, he was such a huge presence for so many people that I think every LEGO Disney fan is glad of his (and Aladdin, Jafar and Jasmine‘s) inclusion in the Collectible Minifigure series. He is, for so many people, the Genie, and as you’ve hopefully seen from this article, he was never far from LEGO’s mind, even before they had the rights to make him.

For now though, it’s time to close the coffin lid, and snuff out the lanterns. Next time, we’re heading to the movies, to take a look at some spooky cinematic classics.

Does LEGO Float: Experiments with Bricks and Minifigures