Welcome to Myths and Minifigs, where we dive deep into LEGO’s crazy creature features and look at the legends behind them! For our first entry, we’re going to start with an undead fiend you’re likely very familiar with: LEGO Zombies. These lumbering ghouls are everywhere, from Shaun of the Dead to Call of Duty, marching haphazardly across pop culture as an unstoppable tide of grey skin and yellow teeth, always hungry for the brains of the living.

I am of course talking about zombies! When there’s no more room in the afterlife, the dead will walk the Earth once more…or so more recent folklore says. It’s the stereotypical image of a zombie that we know today that LEGO has made Minifigures of, again and again, starting in 2010 in the 8683 Collectable Minifigures Series 1, with a grey-suited, drumstick-eating, slow-moving, red-eyed revenant. We’d seen vampires, ghosts, witches and werewolves, but a zombie had always seemed perhaps too gory for LEGO’s brand. After all, zombies are famed in fiction for craving the flesh of the living, and made popular by films like horror classic Night of the Living Dead. 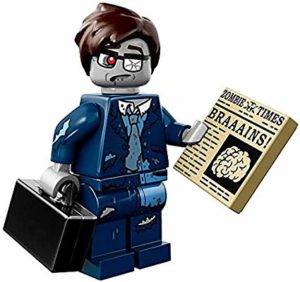 LEGO’s own zombies started to be a bit more tongue-in-rotting-cheek. Monster Fighters screeched its way to shelves in 2012 with a hearse driven by a zombie chauffeur (complete with only one old-fashioned driving glove!), with appearances from a corpse bride and groom whose wedding was cut short, and even an undead chef serving in the Haunted House of a vampire (on 10228 Batwing Lane?).

The Collectable Minifigures went full steam ahead with the undead in 2015, showing us different sides to these lumbering monsters: a cheery zombie Cheerleader, a brain-lubbing zombie Pirate Captain, and (the personal favourite of a colleague of mine) a zombie Businessman, glasses-askew, reading a copy of the Zombie Times! These undead were clearly just trying to fit in, and LEGO cemented the idea that a zombie could also fit into their family-friendly brand identity.

The legend of the zombie is a lot older than the films of George A. Romero (or that song by The Cranberries) and though you could probably trace it back quite a way through some cultures, the most important myth to us is from Haiti. It was said that through the power of necromancy (somewhere, Sauron’s ears are pricking up), the mystical art of conjuring spirits, a Houngan priest could reanimate the bodies of the dead. These walking corpses would be unquestioningly loyal and obedient to the master in all his or her tasks, from protecting the master from harm, to helping create more zombies…

Throughout the 20th century, horror filmmakers began toying with the idea of the voodoo zombie, turning it into something much less controlled and orderly, and instead introducing the idea of a plague, the kind seen in Night of the Living Dead, 28 Days Later, and the Resident Evil games (which one of my colleagues wouldn’t let me write this article without mentioning!). Whether mystical or medicinal, the zombie plague was something that couldn’t be fought by the living: everyone who died would return as a zombie, no matter who they had been in life.

This is likely where the Zombie Businessman, Cheerleader, and Skater came in; the idea that anyone could become a zombie, and this is where LEGO have managed to inject the most of their signature friendliness and humour into an otherwise disturbing figure of pop culture. It’s not like these undead Minifigs don’t have personalities of their own. The Zombie Skateboarder seems more interested in sick rides than eating brains!

The closest Minifigures to the Haitian legend are less the grey-skinned, oddly cute Minifigures I’ve already talked about, and more the Gunner and Quartermaster from LEGO’s Pirates of the Caribbean: On Stranger Tides sets. In the film, these putrefying pirates are exactly as the Haitian folklore said: reanimated servants of a dark sorcerer, in this case the dread pirate Blackbeard. The look of the Minifigures is different too; they mostly look like people, save for their sunken, pale eyes, and the slightest breaking down of their skin as these walking cadavers decompose. As awful (in my opinion) as the film was, it’s interesting that in 2011 we briefly had a glimpse of a pre-Hollywood zombie, and that LEGO were able to capture this in Minifigure form.

Less ghoulish but more chilling to players of Minecraft, we come to our next unfaltering wave of LEGO zombies! I must admit, except for occasionally looking over friends’ shoulders at it, I’ve had virtually no contact with Minecraft, which is strange considering how similar it is in many respects to building with LEGO. The exploding Creepers aren’t the only menace to watch out for at night, and LEGO reflected this right from the first wave of Minecraft sets in 2013 with 21105: The Village, which features an adorable Microfigure of a blue-clothed, green-skinned zombie with tiny, nonthreatening eyes.

They became a little more threatening at full Minifigure height from 21113: The Cave the following year, where their blank, black eyes present a stark contrast to the chipper, detailed expression of the game’s protagonist Steve. It seems they have invaded every corner of the Minecraft world – mines, dungeons, waterfalls, even the villages of the living – and it makes you wonder…if you’re building this world from scratch, are all the zombies other players, other ‘Steves’, who tried and failed to build a world before yours? Could you be next if your world fails too? Or is this line of questioning too deep for the game? 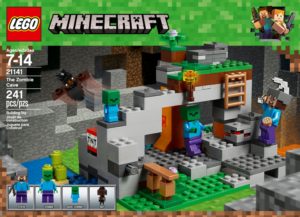 A LEGO Microfig zombie made a guest appearance in the short-lived LEGO Games theme Heroica. Possibly the most adorable zombie of the bunch, this tiny terror was the minion of a vampire in a very Dungeons and Dragons styled quest setting. The games were fun but the fantasy sub-theme only lasted for 9 sets, and the Heroica zombie was lost to the mists of time, never to be seen again…

It’s hard to say why zombies, which are typically so grotesque, have such wide-ranging appeal in fiction, and indeed now in LEGO. Perhaps it is the sense of inevitability, that if the dead begin to rise, they’re an army that can never be fully outrun or hidden from, and one day all of the living will join their ranks. That deeper level of existential horror is a powerful and terrible idea, and I think for the most part, by showing us that a zombie can be a chef or a bride or a chauffeur, they’re using humour to take the edge off, to stop kids from thinking too deeply about the darker side of the Minifigure in their hand. As a fan of horror movies I couldn’t be happier to add the 8683 Zombie and his extended family to my collection! I’m sure I’m not alone.

Of course, with the Zombie Businessman, LEGO did give us one of their finest social commentary jokes of all, a joke that’s on us! After all, if we live our lives as a daily grind, from home to work and back again, and don’t get out there and see what the world can give us beyond our daily drudgery, how are we any better than a zombie?

And that cheery thought, it’s time to close the coffin lid, and snuff out the lanterns. I will see you all soon with a less gruesome bunch of monsters in mind, though you’ll have to be sneaky if you want to catch a glimpse of these crafty cryptids!