It’s nearly the end of 2019. That means Thanksgiving, work Christmas parties and Secret Santas, but also that it’s time for 2020 set announcements! We’ve had a few official LEGO Star Wars reveals, lots of rumours about potential minifigures and sets, but for me personally the most interesting reveal is that of new LEGO Hidden Side sets. From January, we will be able to return to the haunted town of Newbury, to help fight the infestation of the undead.

Without any further ado, let’s take a look at the new sets!

As of this week, six new LEGO Hidden Side sets have been announced:

As with the first wave, the new LEGO Hidden Side sets are an even mixture of vehicles and locations, which in itself gives the whole theme a lot of collective playability. It’s easy to imagine El Fuego’s Stunt Airplane flying over the Ghost Fair, guns blazing. Portal and Newbury Subway Station actually look as though they might be intended to fit together, too, a tactic LEGO is not a stranger to (a la Dol Guldur and Hogwarts). 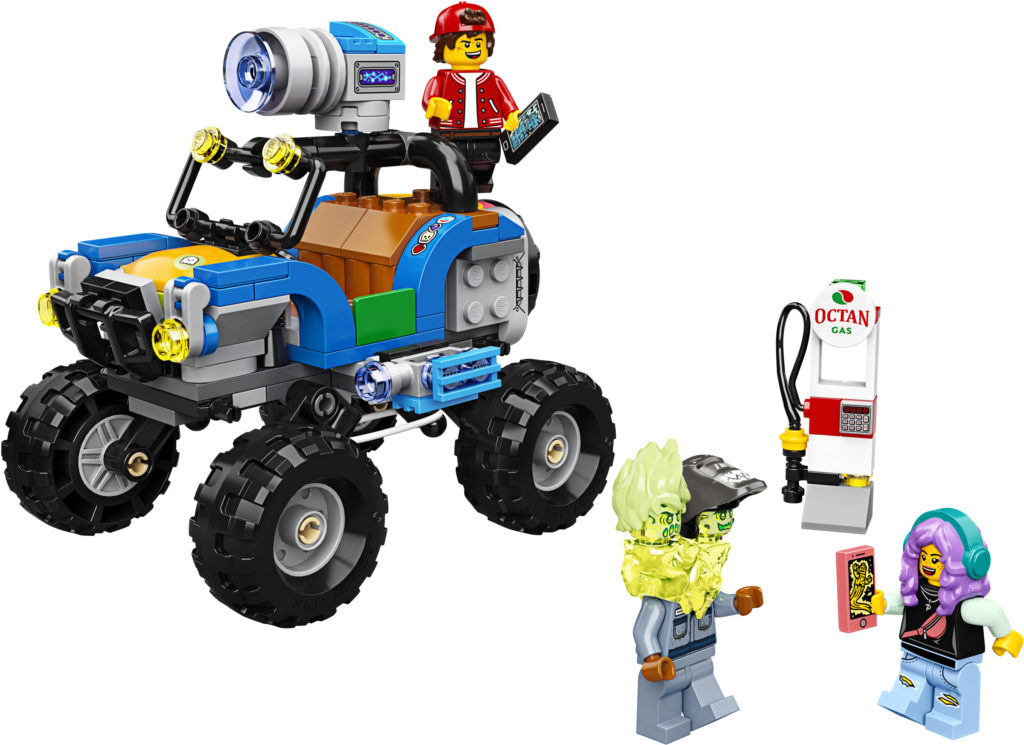 Only the US prices are available at the moment, but there do seem to be more sets at a lower price point, which is probably a smart idea. While as an AFOL I’m able to shell out on multiple £25 sets to get a fairly decent spread of Newbury and its haunted inhabitants, parents might struggle to justify this and/or the high school.

Speaking of the high school, it’s interesting that the hero builds this time are a lighthouse and fun fair. Both seem fun, with lots of play functions and interesting parts, but are slightly less powerful an image than the high school, so I’m wondering if there’s a bold, towering megalith of a set waiting in the wings for wave three later in 2020. Could we see a haunted library? An ancient temple? A haunted mall?

Strangely, there is as much repetition as innovation in the types of build. We’ve never had a haunted subway station before, and aspects of some sets seem quite novel, but other parts are extremely reminiscent of past sets from similar, discontinued themes, particularly LEGO Scooby-Doo from 2015. El Fuego’s Stunt Airplane seems a copy of 75901 Mystery Plane Adventures; though the plane’s design is different, the general aesthetic is remarkably similar.

We’ve had several designs of lighthouse in the past few years, including 41380 Lighthouse Rescue Centre and 31051 Lighthouse Point. However, the best offering was probably 75903 Haunted Lighthouse in 2015, a similar set to Lighthouse of Darkness. which saw Shaggy, Scooby and Daphne attacked by a mysterious, maritime ghost. It was spooky, decrepit, but full of hidden functions and all in all an excellent design.

2015 was, however, five full years from when these new sets will have been released, so this actually seems like a fairly natural part of LEGO’s process. You see it in Star Wars, when X-Wings pop up within a few years of each other; one wave of LEGO-loving kids is replaced by another within just a couple of years, leaving LEGO free to repeat designs, characters, vehicles and landmarks with only TFOLs and AFOLs spotting the connection. Of course, this means that as parts develop and new elements become available, the X-Wing design is innovated upon until something superior is created. Hopefully, once I have the Lighthouse of Darkness and can fully see its design, this will also be the case. If LEGO are able to take the design of a set and improve on it years later like this, then more power to them.

Not long ago, I wrote about some of the influences visible in Hidden Side, and how the theme might have been approached stylistically. The green, amorphous ghosts of the first wave had this heavy imprint of H.P. Lovecraft’s elder gods. Wings and tentacles left me with the feeling that these were not simply the souls of the departed, that perhaps another force was at work.

While I still get that feeling from the new sets and minifigs, I can definitely see another, arguably more prevailant influence. 70427 Portal is quite literally an entranceway into the actual “hidden side”, the ghost’s home dimension, which is the land of the living but with darker, mysterious colours and strange growths everywhere. Ladies and gentlefigs, you are entering the Upside Down.

Stranger Things deals with a more sci-fi form of the supernatural as opposed to ghosts and ghouls, but the tone and aesthetics do lend themselves to the small-town-horror vibes that Hidden Side has tried to capture. LEGO has made one set of this theme in the form of 75810 The Upside Down, and its clear that some of that enthusiasm has spilled over. Drawing on this as an influence is definitely a positive move, especially for the sake of the associations people will make because, you know, Stranger Things is hot stuff. Seriously, you can’t walk through Forbidden Planet without passing a cardboard arcade machine stuffed with Demogorgon Pop Vinyls, specially-branded D&D starter kits, etc.

The eldritch horror setting in the new LEGO Hidden Side sets remains, but the green ghosts are now joined by red and orange terrors, as have been seen previously in the app and packaging. I don’t know whether the colour of the ghost has any bearing on its power or backstory, but I hope this is a level of depth LEGO are considering. Maybe we can get some purple and blue ghosts too; spectral pieces in all colours tend to be useful for Halloween builds sooner or later!

From a few close inspections of the new LEGO Hidden Side sets, it’s clear that when it comes to new parts, LEGO Harry Potter it ain’t. Where other themes like the Wizarding World’s have given us all manner of new castle, window and roof tile elements, Hidden Side is actually pretty lacking. There are some very interesting techniques being employed, but no new pieces…

…until you look at the minifigures and their accessories. As with the 2019 wave, the minifigs are just bursting with character, in no small part because of some great new, vibrant moulds. The protagonists, Jack and Parker, both had dual-moulded headpieces, with Jack sporting a cap and a hoodie, and Parker having long lavender locks trailing out from under a beanie. Throw in the ghosts, their crazy hair and wings, and the standout fisherman with his raincoat and hat, and LEGO had created a memorable, unique cast with new pieces that I’m sure AFOLs will be putting to good use for years to come.

It seems like this trend is continuing. Those previous moulds are still present, but some sets like 70431 Lighthouse of Darkness now also have Jack wearing a red baseball cap with brown hair poking out from underneath (no doubt seconds away from being used for an Ash Ketchum minifigure by someone). Parker has ditched her beanie, revealing a full head of lavender hair, but is now instead wearing a set of teal headphones. While the colours are specific, the pieces themselves are exemplary and I’m sure will keep turning up in new sets.

The ghosts also have new moulds, including energy blasts and ectoplasmic slime pieces very reminiscent of the packs of webs and energy bolts found in Super Heroes sets from 2018 onwards. 70430 Newbury Subway Station is a great example of exactly how these can be used, showing a possessed subway worker with ghostly claws and a cloud of energy around his haunted face.

As a note, the new mountain bike from the latest minifigure series has made it into the Subway set. Fingers crossed more new CMF elements make this transition!

Overall, I think this is not just a good wave of sets, but a good stride forwards for the theme and LEGO’s original themes as a whole. At a time when LEGO is producing so many IP themes (which, for the most part, I do enjoy) it is also nice to see that LEGO’s designers have invested a lot of time and thought into innovating their original products. There’s a great deal of story and play value in the new wave of Hidden Side, and I hope that wave three will bring even more haunted horrors!