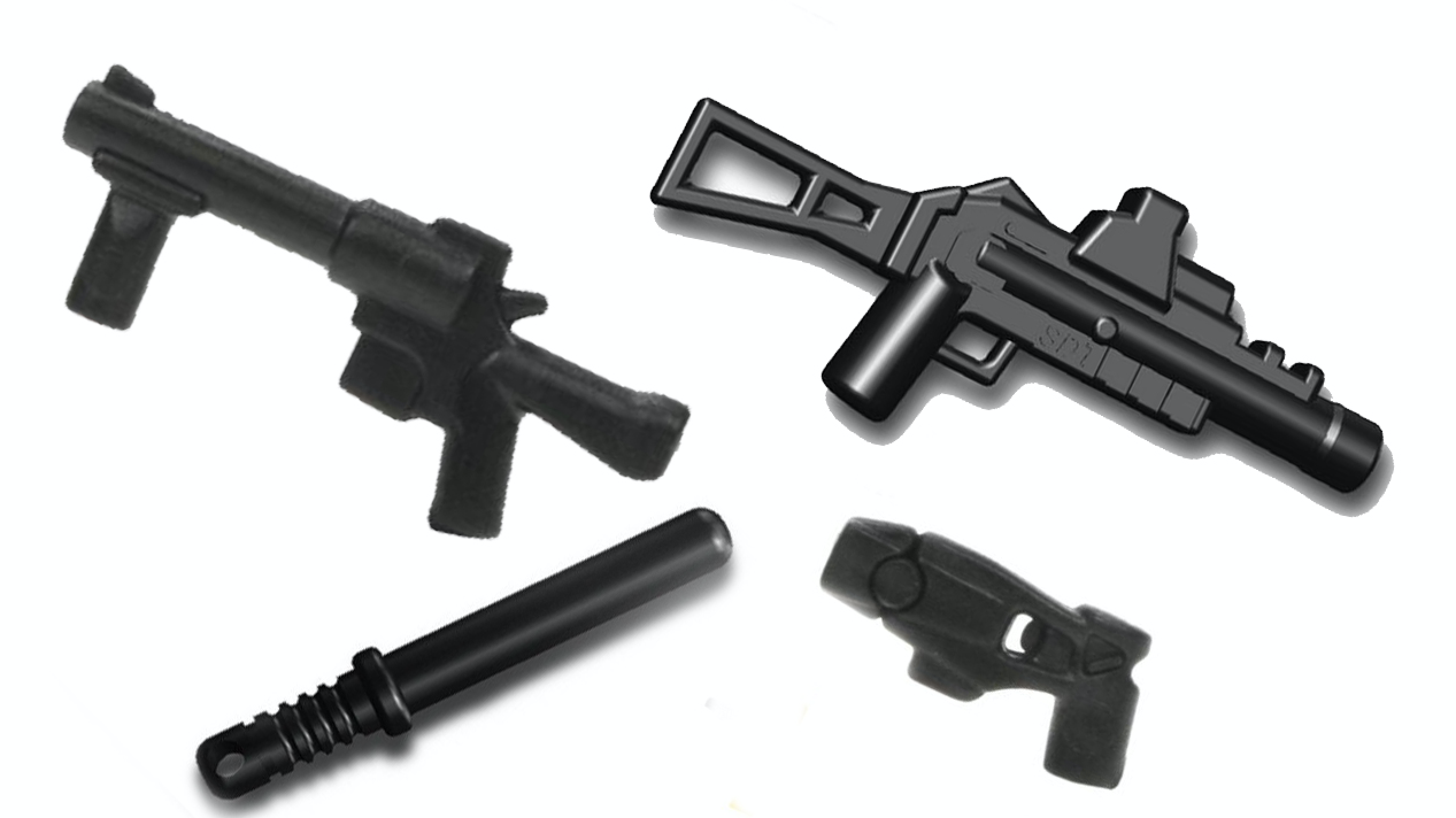 When it comes to LEGO third-party accessories, it is easy to dive into the realm of interesting and tactical-themed accessories. Indeed, if you have been a long-time reader of the Firestar Toys blog then you may remember my series of blog posts looking at some of the LEGO Body Armour and LEGO Headgear pieces which I recommended for getting the coolest, most lethal-looking military themed minifigures possible. I’ve also commented quite extensively on some of my favourite LEGO weapons which are available in the past – so today, I wanted to talk about something a bit different. The whole other world of third-party accessories which is barely touched upon.

Today, we are going to look at some of my favourite third-party accessories which provide your minifigures with non-lethal ways to take down their enemies. There is an assortment of great accessories out there – many of which are ideal for your LEGO City Police minifigures – so today we are going to breakdown some of my favourites. If you enjoy these style of blog posts then please do let me know, because I would love to write more pieces like this for the blog in the future. 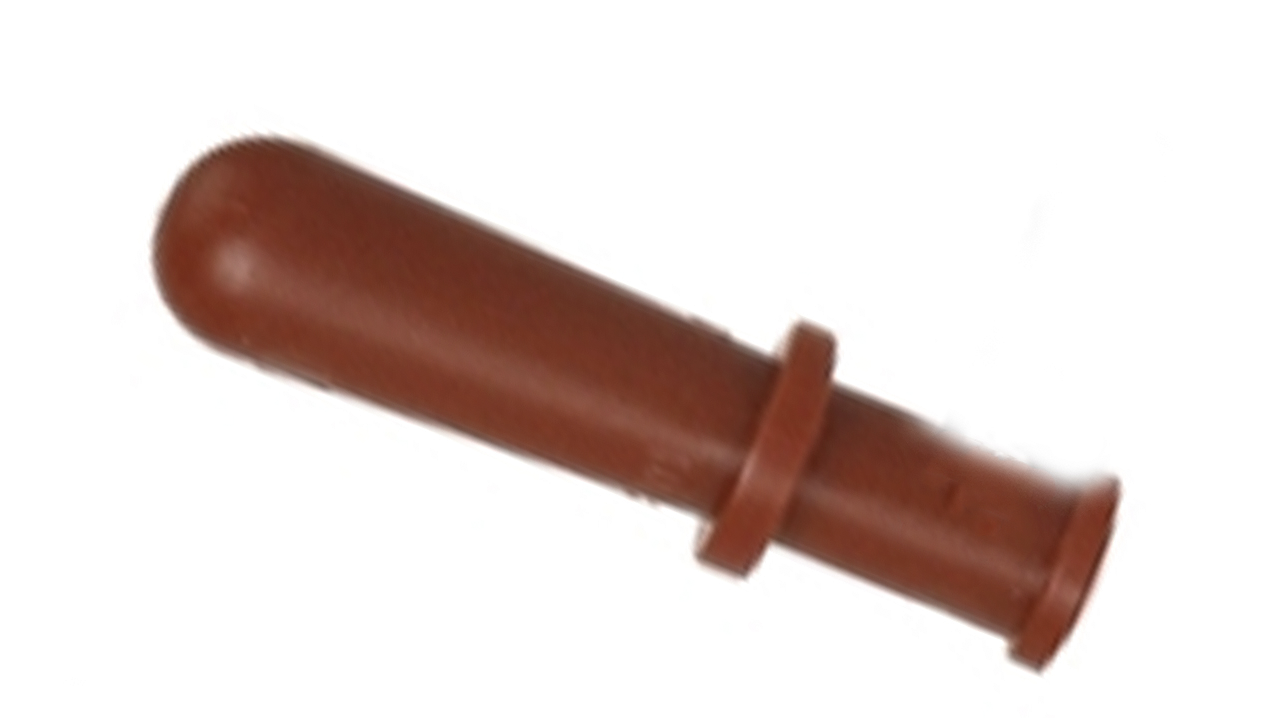 Up first we have one of LEGO’s official non-lethal options for your LEGO Police minifigures – the trusty Police Truncheon. Available in either reddish brown or dark blueish gray, this piece is the perfect non-lethal accessory for your LEGO police officers. Luckily, as well, LEGO’s version of this accessory is relatively low-detail, meaning that it can be utilised in a variety of different environments effectively. The gray version of the accessory works well as part of the modern LEGO City line – whilst the brown version is great for historical displays, which explains its original inclusion with LEGO’s British Bobby from the Victorian era!

If you want to pick up this accessory, you can click here to purchase the more modern gray version, or here for the slightly older reddish brown version.

Next up I wanted to look at some of the fantastic Nightstick and Baton accessories which are on offer from our amazing friends at SI-Dan toys. SI-Dan offer a variety of different non-lethal accessories for your LEGO minifigures, meaning that you can choose the best look for your figures. There is something for everyone here. The PR1 Nightstick is a great example here – providing LEGO fans with an authentic-feeling collapsible baton which works incredibly well with modern police and military characters – perfect for your LEGO City Police!

This baton is used in a plethora of countries and by a vast range of different organisations – so it’s inclusion is a smart choice and creates a great accessory which I think many fans will enjoy. In contrast, the stun baton feels like something which is a little bit more futuristic and therefore wouldn’t look out of place in a Star Wars diorama, or in the hands of your Black Widow minifigure. The assortment of different accessories available here highlights how many fantastic non-lethal alternatives there are for your LEGO minifigures to make use of.

Click here to pick up the PR6 Stun Baton. 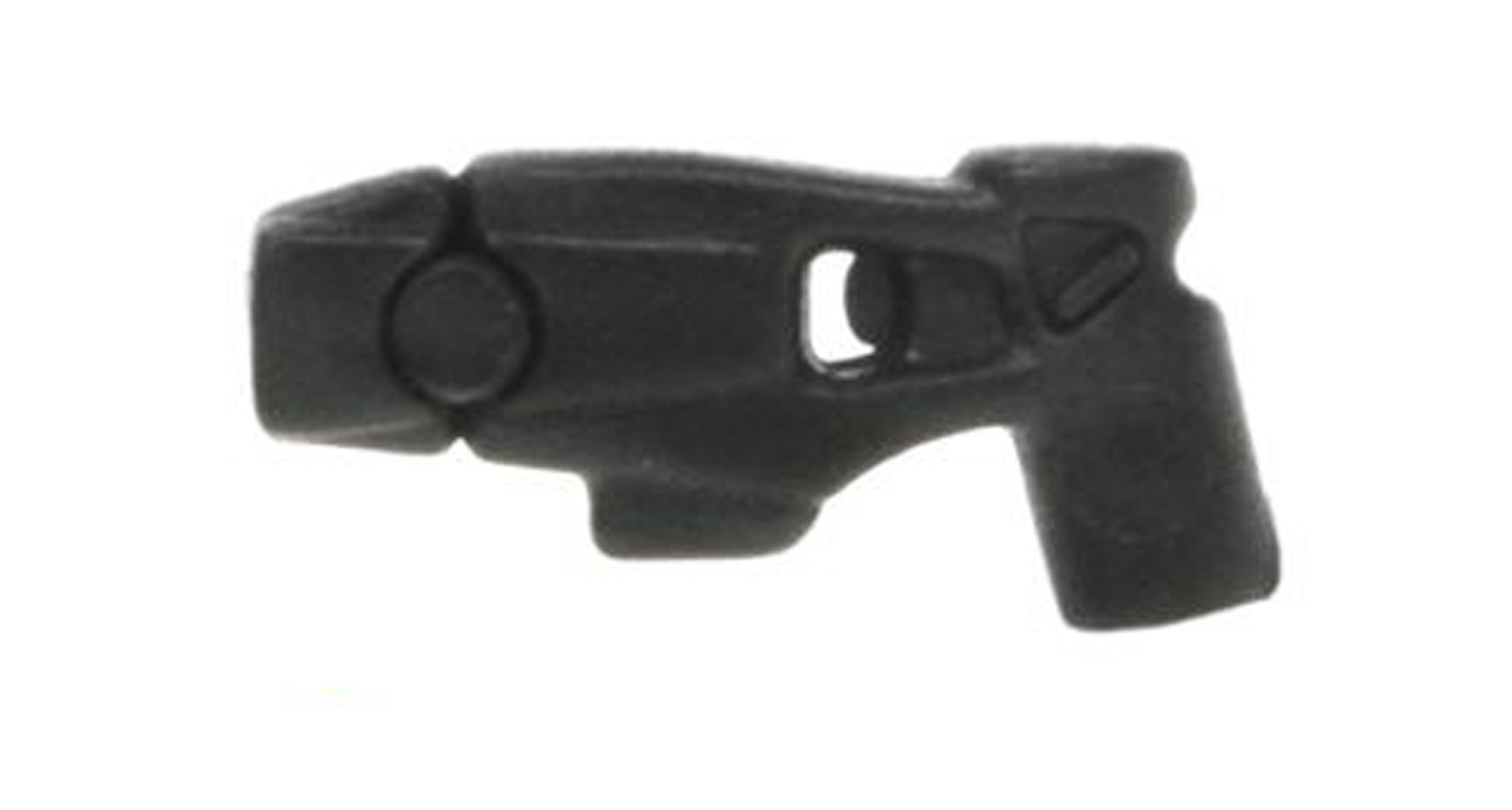 Another fantastic non-lethal accessory which your LEGO minifigures can get their hands on must be the awesome ‘TASE Gun’ made by the incredibly talented team at BrickForge. The TASE Gun is obviously based on many modern-day Taser variants – non-lethal weapons which many law enforcement officers now carry as a part of their everyday carry belts. Tasers are ranged weapons which allow police officers to take out suspects who may be behaving erratically from a safe distance – providing them with the tools and the power to de-escalate a situation and bring a perp into custody safely.

Several great colour variants of this accessory from BrickForge exist – all of which have their own great perks to them. My personal favourite is the traditional black-coloured TASE Gun, which you can pick up right now on sale for only fifty pence by clicking here. You won’t regret adding some of these to the tools available to your LEGO City Police Officers! 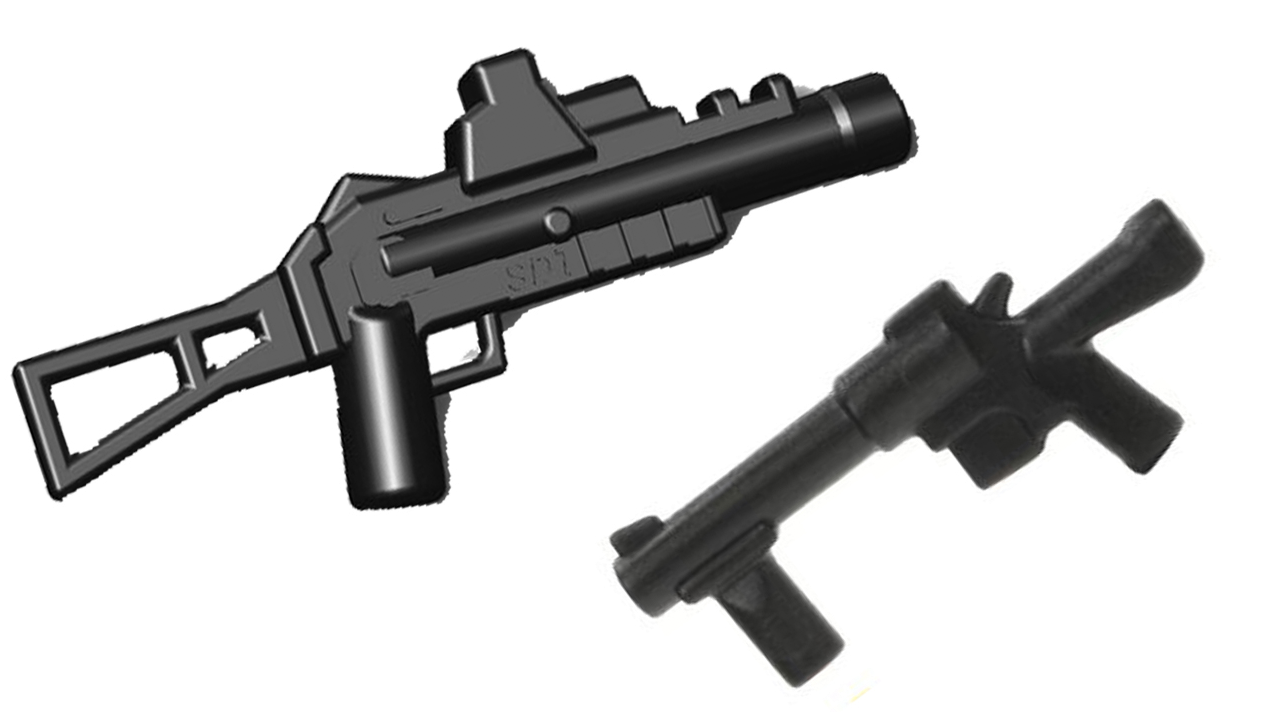 In addition to the other items we have looked at, another popular non-lethal option which gets the LEGO treatment is the projectile grenade launcher – a weapon which is often used within the real world to shoot tear gas into large crowds of individuals to clear them, or to complete a tactical entry into a building to disorientate hostiles. There are several great variants of this weapon on the LEGO market from different third-party vendors at present – all of which have their own unique style and all of which look great in the hands of minifigures.

The first I’d like to highlight is the SI-Dan Federal Gas Riot Gun – a great accessory which is a more traditional-style weapon used to fire gas in riots. This is a lot like the crowd dispersal gun which is set in many countries at present, with a single, fold-loading chamber to hold gas capsules. Pairing this accessory with something like a smoke grenade from SI-Dan can make for a great looking display.

Another great accessory which is available is the BrickForge Canister Gun – which takes a lot of parallels from the Federal Gas Gun, but creates something which is more stylized and which feels different to some of the other accessories which are out there. Lastly, we have my favourite variant of this style of accessory which is the Gas Riot Gun from SI-Dan – another fantastic SI-Dan accessory which feels a lot more tactical than some of the other variants which are out there. I like the skeleton stock and the holographic scope which are on this weapon – helping to make it feel more akin to something which may be used by a S.W.A.T team. 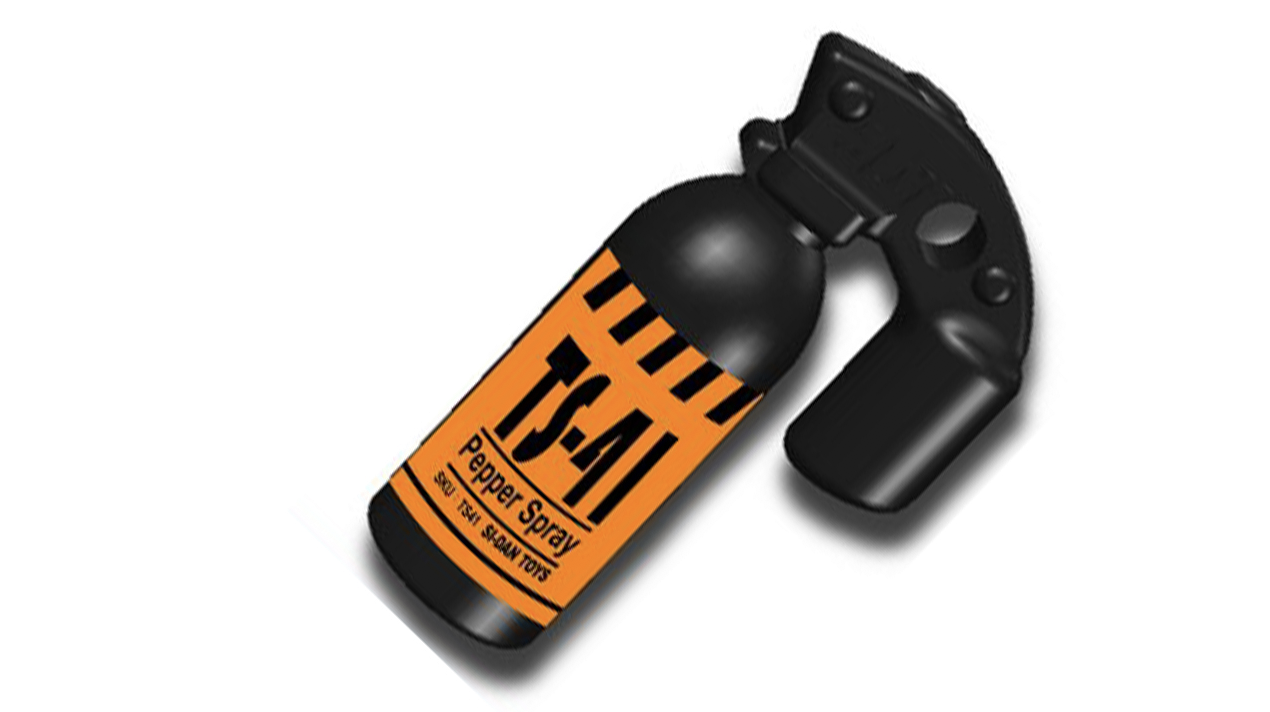 Last, but certainly not least, we have one of the BRAND-NEW accessories which the amazing team at SI-Dan have recently created – providing our minifigures with a non-lethal option which can not only be used by our law enforcement figures, but also by the general minifigures who exist within our cities too! Pepper Spray is a popular non-lethal deterrent which is used every from law enforcement to military training, and it is something which I never thought we would see portrayed in LEGO form, which is why I love SI-Dan’s interpretation of this non-lethal object so much. Not only do we have a recognisable sculpt in SI-Dan’s accessory, but we have some awesome printed details on this accessory which really help to make this stand out as a unique new piece for minifigures.

If you’d like to get your hands on this, and other, awesome new SI-Dan accessories, then click here to check out the newest items.

To conclude, there are an assortment of great non-lethal options for your LEGO minifigures to utilise. Whether you are looking for batons which you can outfit your LEGO Black Widow figures with, or non-lethal ways for the LEGO City Police  to capture their criminals, it is safe to say that there are some fantastic options out there. As new and innovative accessories continue to be created for our minifigures too, I am certain that we will continue to see fantastic new non-lethal alternatives which are ideal for our LEGO law enforcement operatives.

Do you have a favourite accessory from this list? Which ones are you planning on buying next? Let us know in the comments below – and click here if you’d like to read some of my other work here on the Firestar Toys blog.