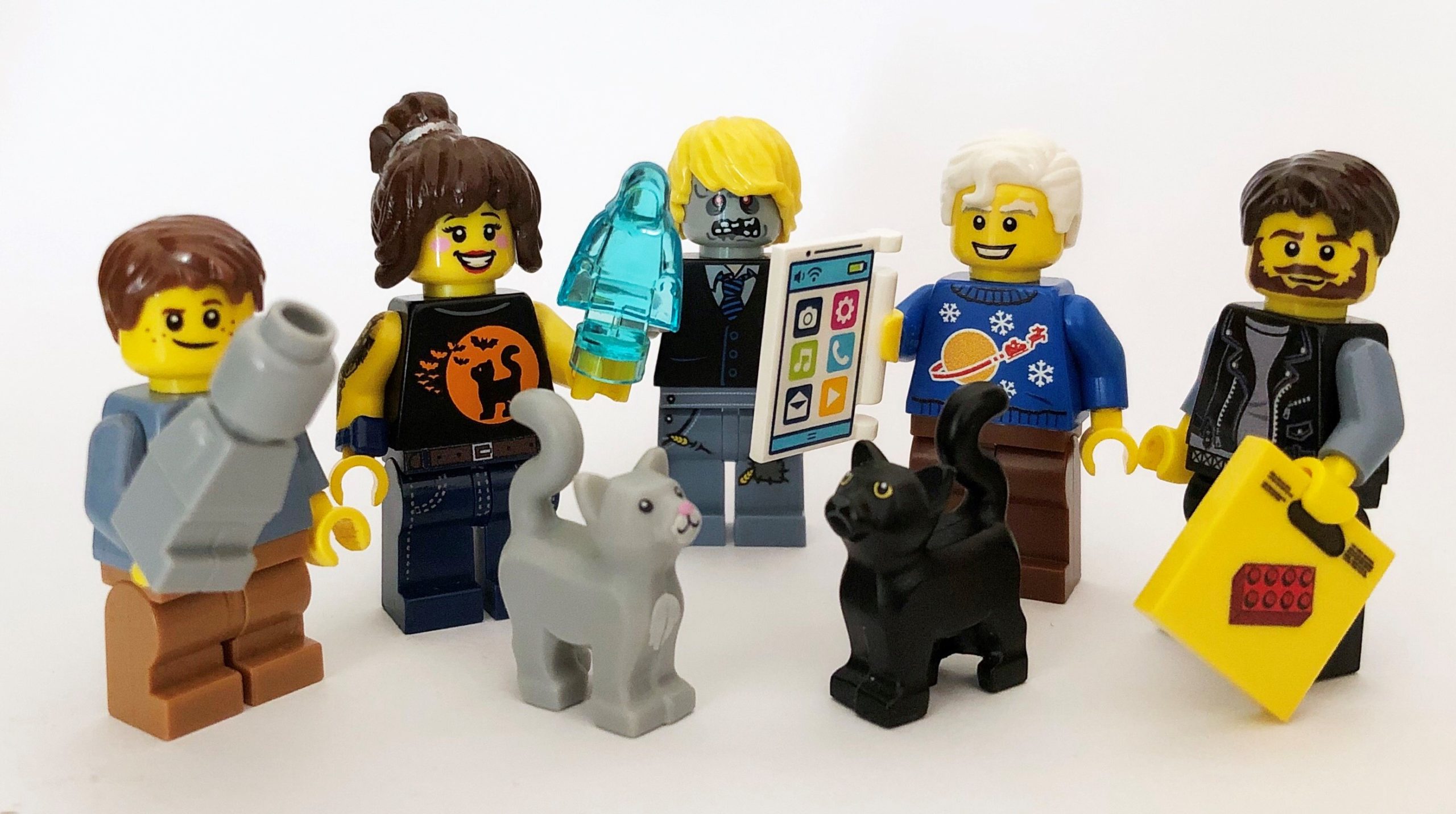 So, that holiday you’ve been longing for all these years have finally arrived! But what’s that? The kids are right there with you! You can’t get a moment’s peace! You want to do something, but they’re like “Mom! Dad! I’m boooored!”. You can just send them to their rooms, tell them to busy themselves with their tablets and computers, but you know it’s not very healthy to do that. So, you start thinking of ways to keep everyone, especially the kids, busy while you’re also having fun. And tell me, what’s better than playing with LEGO?

All jokes aside, before we start, I hope whoever you are, wherever you are, you are safe. The whole world seems to be on lockdown, and I hope you and yours are unaffected by the coronavirus.

Right, let’s get back to the subject, shall we? What can you do, as a family, to pass the time?

We started with some organizing. I’ve been talking about doing it for months. I needed to clean them, count them, re-organize them, add them to Brickset’s database for quick access, but never had the time to do so. So yesterday, we took out the old and the new baseplates, took out the minifigures, and started to organize.

Of course, when you’re a perfectionist, it’s not easy to be satisfied when someone else does the organizing for you. And if that someone doesn’t have your knowledge on LEGO minifigures, it’s even harder. But what can I do? Everyone wants to be a part of the fun, and I had to adjust (believe me, there’s still a voice screaming in my head!) 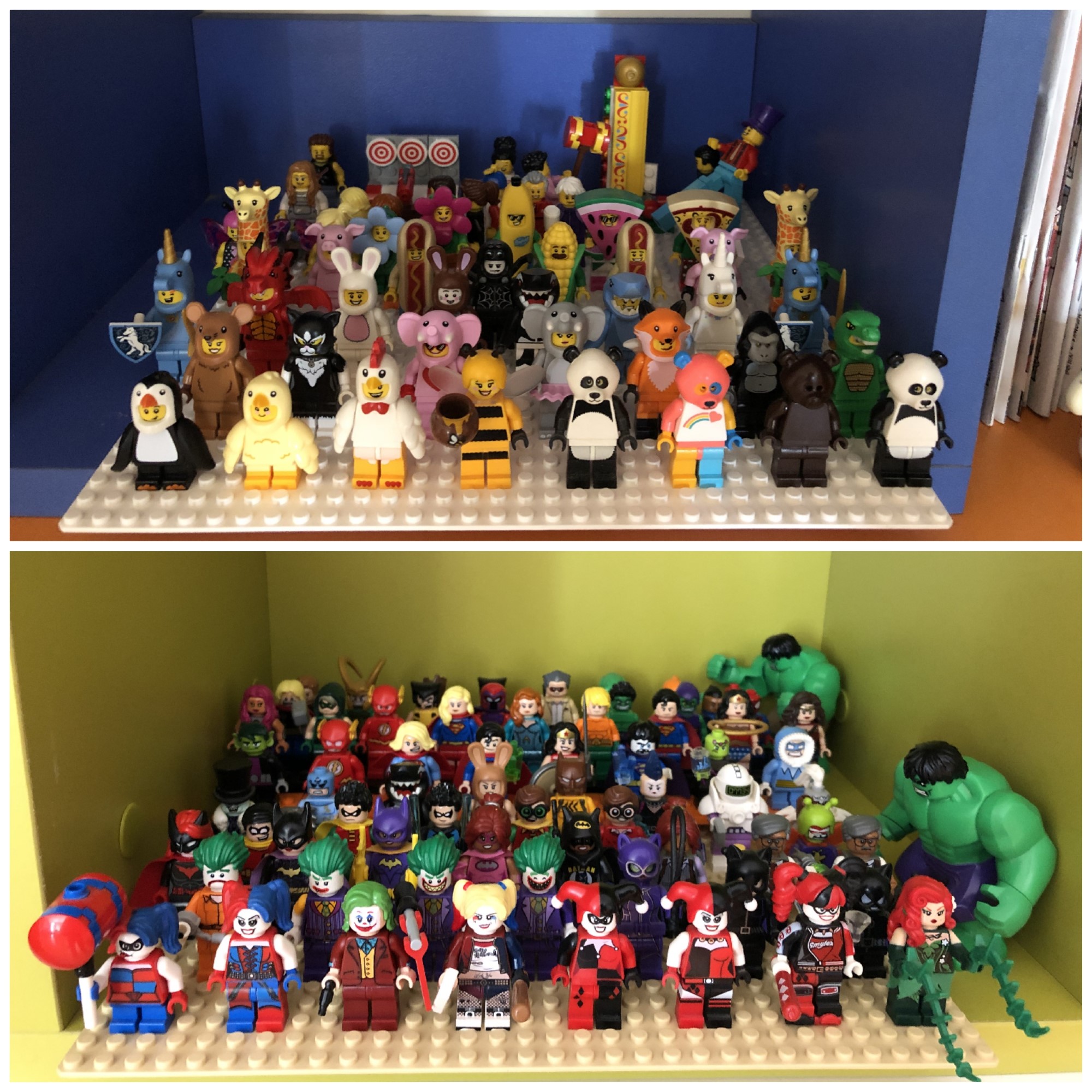 The minifigures from the People Pack: Fun Fair set have been staying in the box for months, so I decided to start with them. I created a little setting including the minifigures and the mini-builds, but it wasn’t enough to fill the baseplate. So, I decided to add the costumed minifigures, too. It seemed fitting to have some mascots on the fair ground.

Meanwhile, my boyfriend was organizing the Ninjago and Star Wars figures. He has seen them locked in a box before, and after we added a new display space to our house, he put them on the shelves one by one. With the new baseplates arriving, he wanted to make them look more organized. So he took them out, I added a few more, and he started working on that. 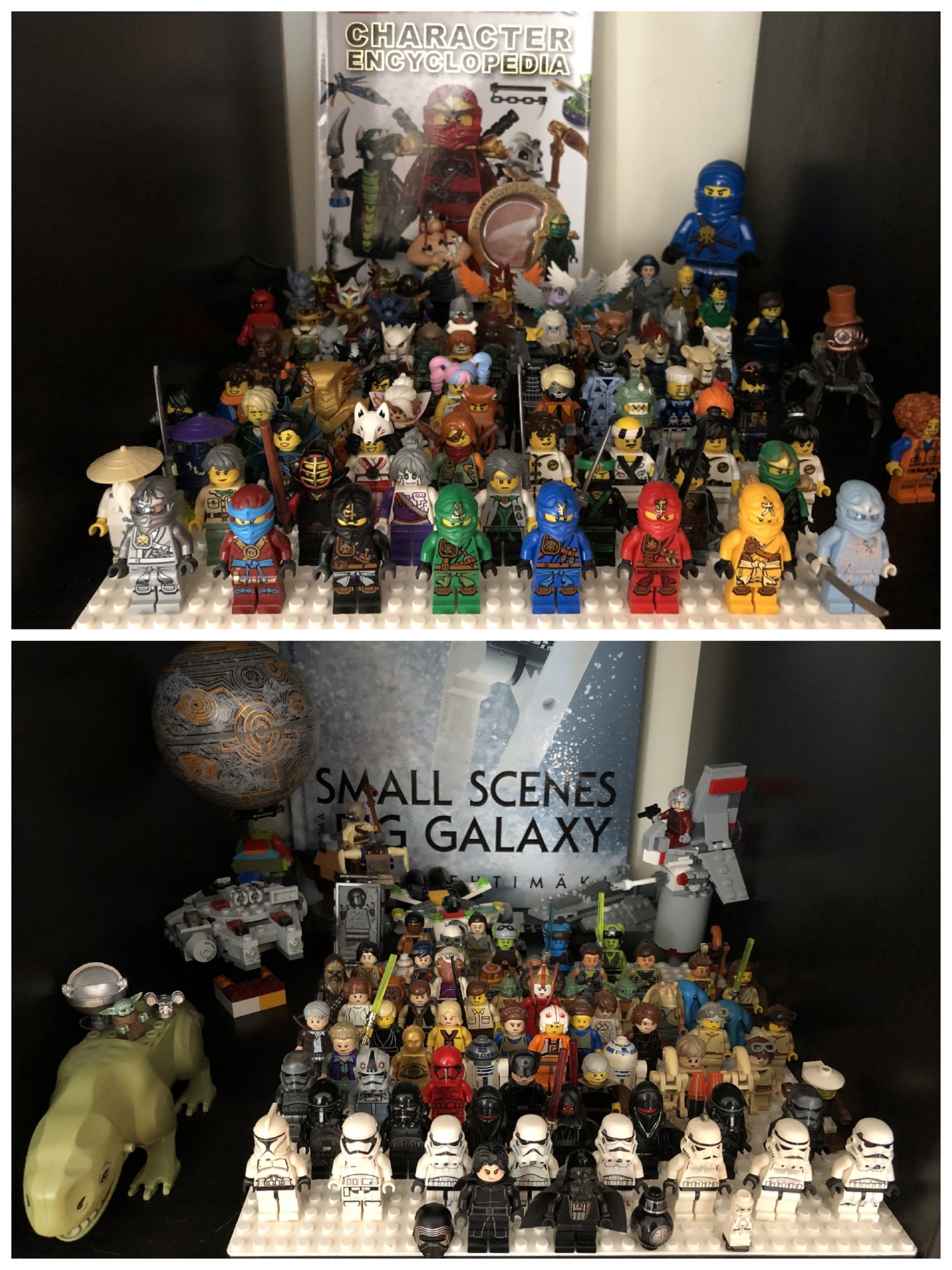 My dad thought there may be a few minifigures who got sick during this pandemic. He created a little hospital, made a few beds out of paper, and started treating the infected with the doctors and nurses. He was playing with the LEGO minifigures, making them talk to each other, and so on. By the time we were done organizing, they all got better and went back to their baseplates.

Of course, we also have a little monster, ehm, I mean kid in our family. While we were organizing and creating stories, he was going around, helping us, and driving us crazy with his questions. So I told him the story behind the minifigures. When they were made, who they were based on, what they meant to me and so on. That, by itself, was more tiring than organizing, but I managed to keep him entertained for a while. 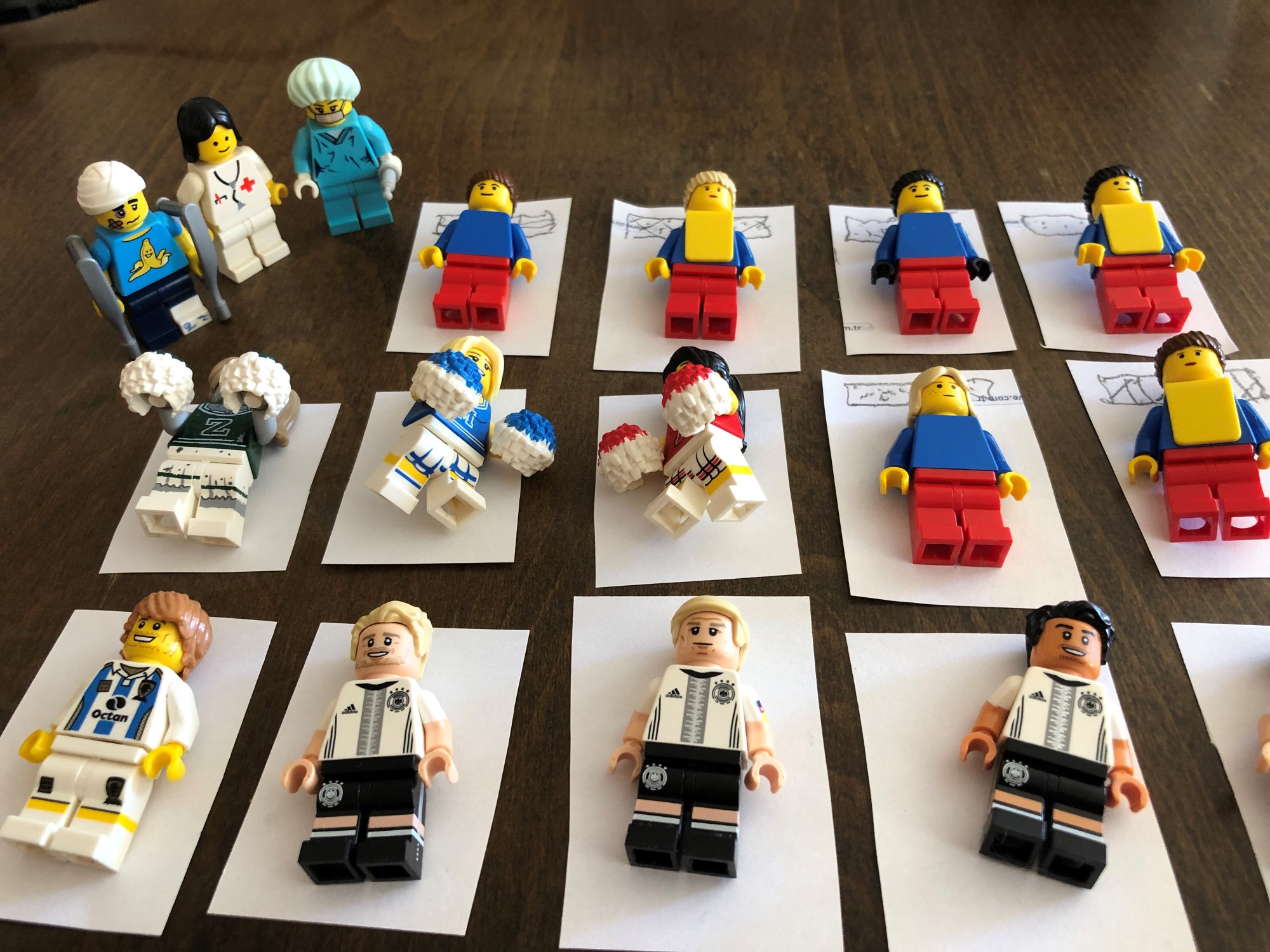 He did try to kill the infected minifigures with his Leon Kennedy minifigure, who, as I’m sure you know, loves killing zombies, but after the first two, the doctor minifigure kicked Leon out for trying to hurt rather than help.

When the organizing part was over, and we still had time on our hands, we went on to building. I had a few sets lying around unbuilt because of lack of space, so I took them out. Even my dad was shocked! He had forgotten all about them.

It’s not easy building something as a family, since most LEGO sets come with one instruction book. But you can always take apart a previous set and start over again. And you don’t even have to follow the instructions for the second time around! So, we took apart a few old ones, and suddenly everyone had a set on their hands to build! Some were easier to do, and took less time. Others, not so much. Still, at the end of the day, everyone had a little build in front of them.

Of course it’s easy playing out different scenarios when it comes to LEGO. There’s no rule saying you have to follow the instructions.

Okay, okay, I know not everyone is into reading. But these are not your everyday books. They’re LEGO books! They all have incredible images in them, and a lot of fun facts, too! LEGO and DK has published books on so many different themes. Star Wars, Nexo Knights, Ninjago, DC Super Heroes… not to mention the books on minifigures and LEGO history.

The next day, we took out the books. Everyone picked one of them, and started reading. Well, looking at the pictures, mostly. Since I’m the go-to person of the house when it comes to LEGO, they started asking me questions about certain minifigures, certain sets, and I tried to answer them as much as I could. I admit, I may have cheated by reading a few facts from the books, too. Hey, I can’t know everything, right?

While this may seem like an easy way out, by now you probably guessed that I’m not talking about any movie. There are some cool films and animated series by LEGO that are worth watching. Some may be boring for adults, but they’re mostly fun, even if it’s in an idiotic kind of way. A few of my favorites are LEGO DC Batman: Family Matters, LEGO Star Wars: The Padawan Menace, and Lego DC Comics Super Heroes: Justice League – Gotham City Breakout. They’re sure to give you a laugh.

Of course you can always watch the feature films, the LEGO Movie 1 & 2, the LEGO Batman Movie, and the LEGO Ninjago Movie. The LEGO Ninjago TV series are a good choice to pass the time, too, and talks about the stories of all the little ninjas.

So after a long hard day, you can make some pop-corn and have some laughs while watching a movie as a family.

My kid always complains about wanting to build something but not having the pieces or the colors he wants. I usually answer him by saying “Welcome to my world, kid”. However, there are alternative ways to building whatever you want. I know our purpose here is keeping kids off the screen, but I believe designing something on the computer together is much better than just saying “Go do whatever you want” – which, no doubt, will be playing games all day.

There are so many LEGO software, official and unofficial, that you can learn together. LDD (LEGO Digital Designer) is, in my opinion, is probably the easiest one to use, but if you’re into some more advanced stuff, I’d recommend Studio by Bricklink and Mecabricks. While most of these software require downloading and installing, Mecabricks runs on your browser, and can even be used on a tablet. With extensive rendering features and parts library, it will surely keep you and your kid busy for hours. And in the end, neither of you will complain about not having enough parts again! Building LEGO digitally makes playing even more fun.

You can also find a more extensive look at LEGO software right here.

So, what else would you do as a family to keep everyone busy? What are the ways you’d suggest to make playing with LEGO more fun? Let me know in the comments, and please, please stay safe. These days will pass.