There was challenge on Brickcentral in February. Re-creating a picture you’ve taken a while back, using the skills you’ve learned along the way. Right, sorry, not everyone reading this blog may know what Brickcentral is. So, I believe some introductions are in order before we begin our trip down memory lane with the Prison Architect minifigure.

Brickcentral is one of the oldest LEGO photography groups on Instagram. Honestly, I don’t know much about its history, like who created it and when, but it’s been active since I first started almost 5 years ago.

Other groups have come and gone during this time, but Brickcentral managed to stay afloat. I think one of the main reasons behind it is the changing admins. Each month a different user is made admin, and each of them sets the theme and the challenge of the month. When you participate in those challenges, you get the chance to be featured on Brickcentral’s Instagram account.

For those who already have a lot of followers, this may not mean much, but if you’re new to the community, you get seen by the thousands of people following the page. I still remember when I was first featured.

I mean, you would laugh your hat off if you see those images, they were as simple and primitive as you can imagine. Still, the idea behind it must have seem interesting to the admin at the time, so it was featured. There are no words to describe my excitement when I logged in and saw it. My picture was deemed “worthy”!

Recently, one of the Brickcentral admins created an online forum page, where you can find contests, challenges, giveaways, but also tips and tricks, behind the scenes shots, and interviews with many good photographers, as well as discussions about different subjects.

While I don’t have a habit of reading and/or participating in forums, I made an exception this time and took a quick look. Some of the articles were so interesting, not to mention helpful, that I ended up spending an hour on there.

So why, all of a sudden, am I writing about them? Well, dear reader, like I said in the opening paragraph, this month’s challenge, re-boot, is very interesting. There was a 10 year challenge recently on Instagram, where people posted mostly selfies of how they looked 10 years ago and now. This, of course, resulted in many funny images in the LEGO community. 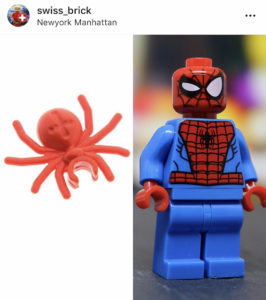 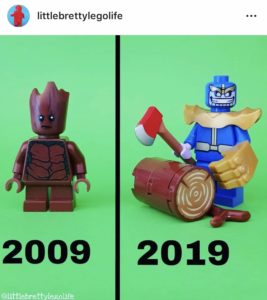 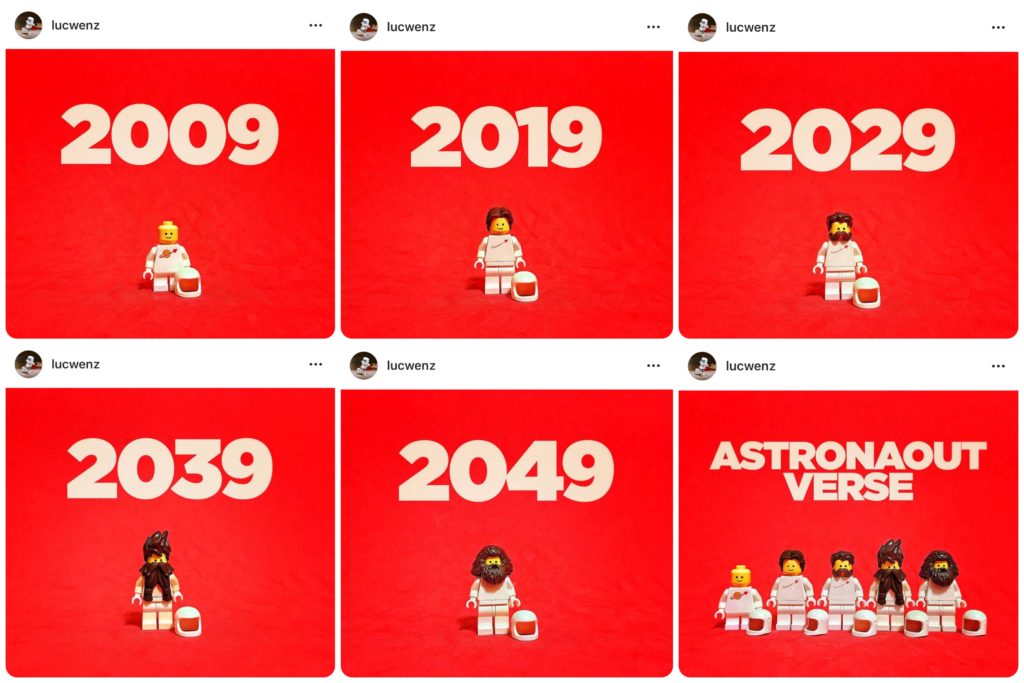 I find this challenge a bit similar to that. Being a toy photographer myself, not only I feel the changes in my photography, but I also see it when I look at my first photographs.

Whether you started 5 years ago or 5 months ago, you have the opportunity to learn something new each day. Sure, there may be some near perfect images in the beginning, either because of beginner’s luck, or careful planning and execution, but if you try to take the same shot today, there will definitely be something different in it.

We change every day, with every incident and interaction, and these affect everything we do. Photography is no different. One day you learn about lighting, the other day composition, storytelling, rules, breaking the rules, and you reflect them in your photography, sometimes without even realizing it.

However, as you advance in any subject, in our case, photography, you also find it harder to find an original idea to shoot. After a while it feels like you’ve already taken pictures of every minifigure you own in every possible combination, even if you haven’t. You struggle to find something that hasn’t been done before.

And that’s when the prompts come in. When I was drawing regularly a few years back, I found out about prompts, and how useful they can be. They can be as specific as “a minifigure sitting under a tree, reading a book” and as vague as “blue”. You see the prompt, and shoot whatever image it creates in your mind. “Blue” can be a minifigure dressed in blue, a sad situation, a small house under the blue sky, or even the clever girl we all know and love from Jurassic World. The only limit is your imagination.

But if you don’t have time to make your own prompt list, you can go to Brickcentral and check out their monthly challenge. Sure, it may not always speak to you, but there’s a good chance of getting that inspiration if you see what other people are doing. It is, after all, about sharing ideas and experiences, and improving yourself in the process.

Apart from the chance to see how much you’ve improved since you began, this challenge has another upside: Re-visiting your old images. Since it’s about re-creating a previous picture, you need to choose which one to re-create. So you go back and look through every picture you have taken.

And if, like me, you’ve been doing this for several years, you get the chance to a walk down memory lane. Each image reminds you where and under what circumstances you’ve taken the picture, and since we tend to share happy memories rather than sad ones online, it puts a smile to your face.

As I was looking through my gallery, I made several mental notes as to which ones I’d re-create. In the end, I did one I had no intention of doing, because in my eyes it was already perfect. However, I really liked the minifigure I used as a subject, so I decided to join just for the fun of it. 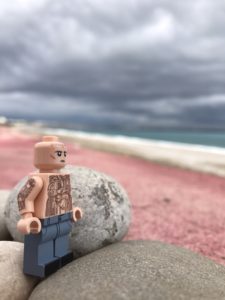 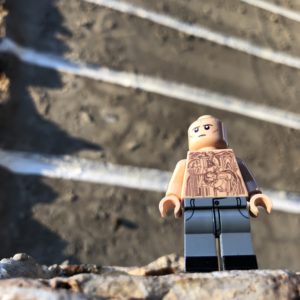 The one on the left was taken in 2017, on a very cloudy day, near the sea. I loved how the pinkish pavement created a contrast to the dark blue sky, and how my Prison Architect was looking to the horizon with a stern expression. Also, I have unknowingly created some diagonal lines – or leading lines, as they’re called in photography – which gave a sense of depth to the picture.

Now the one on the right, on the other hand, was taken a few weeks ago. As you can see, the Prison Architect is as stern and full of thought as ever – but more on that later. Even before I started shooting, I knew I wouldn’t be able to take a picture as ‘perfect’ as the first one.

I’ve been off my game for a while now, and when you stop doing something for a while, it’s not always easy to get back on the horse. I was counting on the sun’s position (it was almost setting) and the beauty of the minifigure to take an okay picture. Sure, I was lucky enough to find a setting similar to the first one, with some leading lines on the back and a stone wall to stand on, but that was it.

I ended up taking 45 images that day. The one above was my favorite, and the ones below were worthy enough to keep.

So how come I ended up re-taking an image which, in my eyes, had no space for improvement?

I was a big fan of the Prison Break TV series when it first came out. The idea of getting into prison so that you can escape from it was fascinating, and the way this guy did it, even more so. His body was like a piece of art – and no, I’m not talking about how sexy he is 😛 – I used to stare at the screen whenever there was a close-up scene of his tattoos.

So when an e-mail appeared in my inbox announcing a new custom minifigure called “Prison Architect”, I didn’t think twice before buying it.

There are many good custom minifigures out there. However, you never know how good it is before actually holding it in your hands. Seeing the picture on a website just doesn’t give the same satisfaction, even if you’re able to see it from all sides. I remember drooling for a few days after my Prison Architect has arrived. The amount of detail on it was indescribable. His expression was spot on, and his tattoos were amazing. I mean, we’re talking about printing on a curved surface with several millimetres here.

Sure, LEGO does it, but it’s LEGO for crying out loud! Even in real life it’s hard to get a small tattoo, so I doubt giving such detailed tattoos to a minifigure was easy. Nevertheless, it was done, and the minifigure was awesome.

When I was going out for my re-boot photoshoot, I looked at my minifigures to pick one or two to take with me. That’s when the Prison Architect spoke to me (yes, my minifigures speak to me from time to time, telling me all kinds of things. While we’re at it, the answer to your second question is also yes, I’m a little crazy, but who isn’t these days?)

Anyway, he told me he wanted to come along. Having recently looked at my past pictures, I told him I didn’t want to re-create his picture, we argued for a few seconds, and as you may have guessed, I lost that argument. I didn’t mind much, though, because like I said, I loved the minifigure, and it’s been a while since I’ve taken a picture of him. He was still photogenic, and the sun did help to bring out the details, so I’d say it wasn’t a waste of time.

February is long gone, and the challenges keep changing each month, but I’d definitely recommend checking out the images created under #bc_reboot, and trying to do your own if you’re up for it!

Custom LEGO: Fred Flinstone Gets Crazy – and a Tattoo!