The scene is legendary. Eight Imperial officers debating the implications of a planet destroying weapon. A mechanical Sith Lord president over the meeting. One of the few remaining believers in all powerful force that binds the galaxy together. Darth Vader himself, choking an Imperial officer for his insolence. The scene is iconic in the eyes of most Star Wars fans. In this article I will examine all the parts, pieces and minifigures you need to recreate your own LEGO Death Star Conference Room scene. 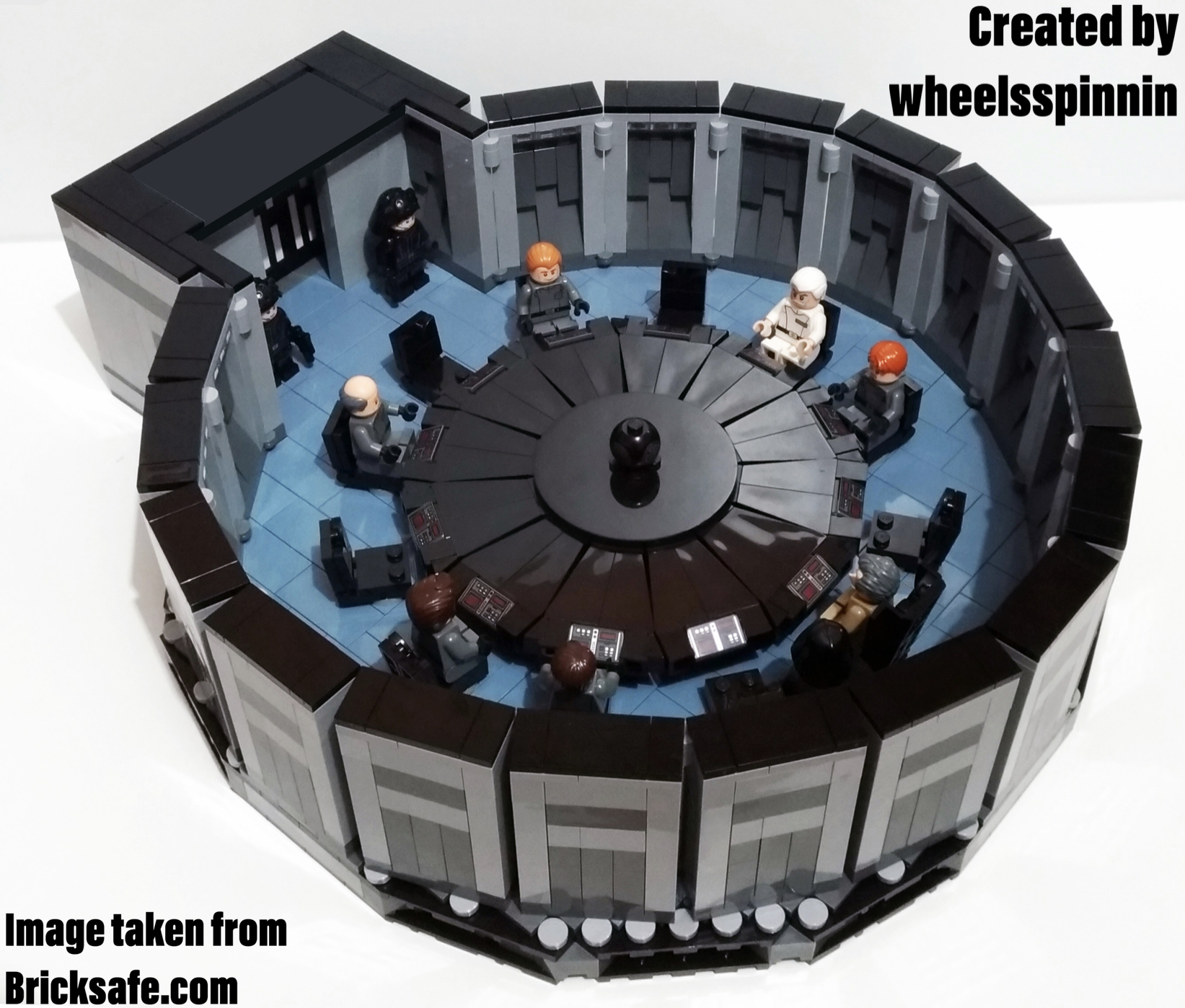 The Death Star Conference Room has been depicted by LEGO in two LEGO Death Star sets. Whilst both of these capture the essence of the scene, they are nowhere near minifigure scale. Fortunately, a Rebrickable user, wheelsspinnin has designed an incredible Conference room MOC that recreates the scene in stunning detail. Make sure you check out his page if you want instructions for this awesome build. 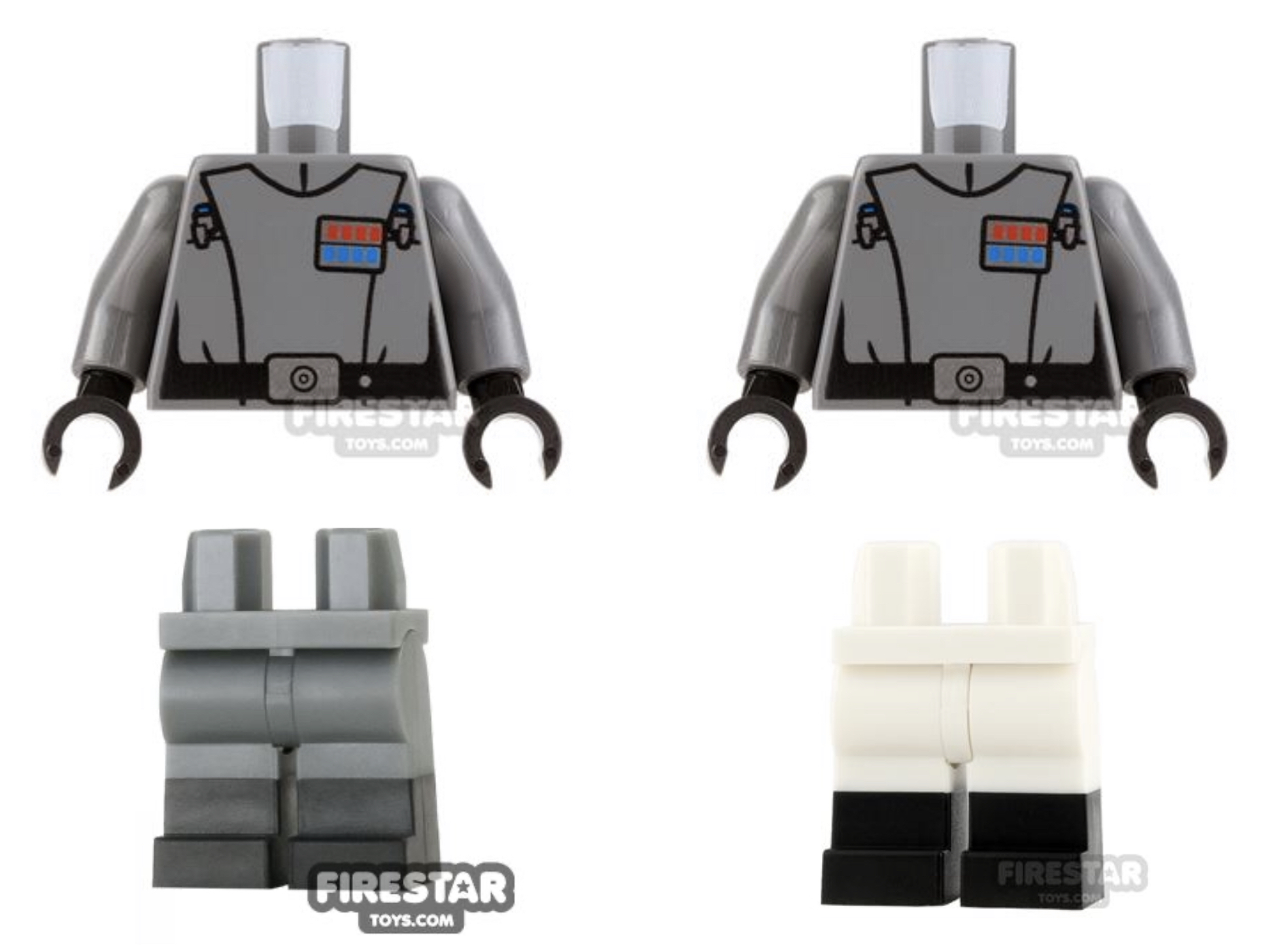 Most of the Imperial Officers in this scene wear dark grey uniforms. LEGO made the perfect piece to depict this. Fortunately, uniform torso pieces are fairly common due to their inclusion in the Imperial Patrol Battle back and the 2017 Star Wars Advent Calendar. I recommend combining these with dual moulded legs to represent the minifigures boots (these leg pieces can be acquired in both grey and white). 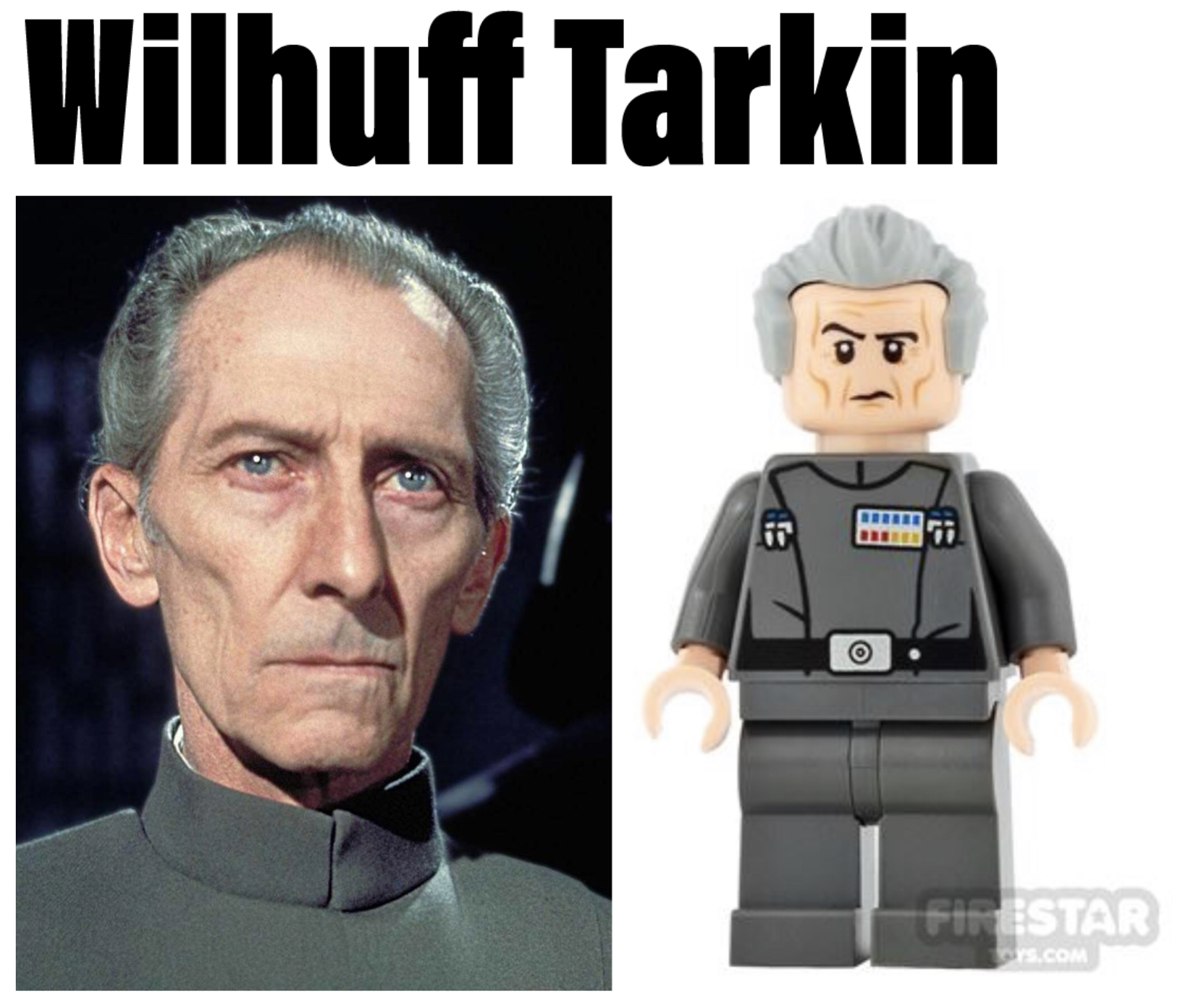 Wilhuff Tarkin was born on the planet Eriadu. When the Clone Wars began, Tarkin became a commissioned officer in for the Galactic Republic. Anakin and Obi Wan staged an elaborate rescue mission to break Tarkin out of a separatist prison on Lola Sayu. Tarkin was elevated to the role of Governor as the Galactic Empire was formed. He worked with Grand Admiral Thrawn and the Grand Inquisitor to rid the Lothal system of a particularly troublesome rebel cell. Eventually, Tarkin was promoted to the rank of Grand Moff. He was the imperial officer that ordered the destruction of Alderaan. LEGO included an official Grand Moff Tarkin minifigure in set 75159, The Death Star. I recommend acquiring this minifigure if you wish to recreate the Death Star Conference Room scene. 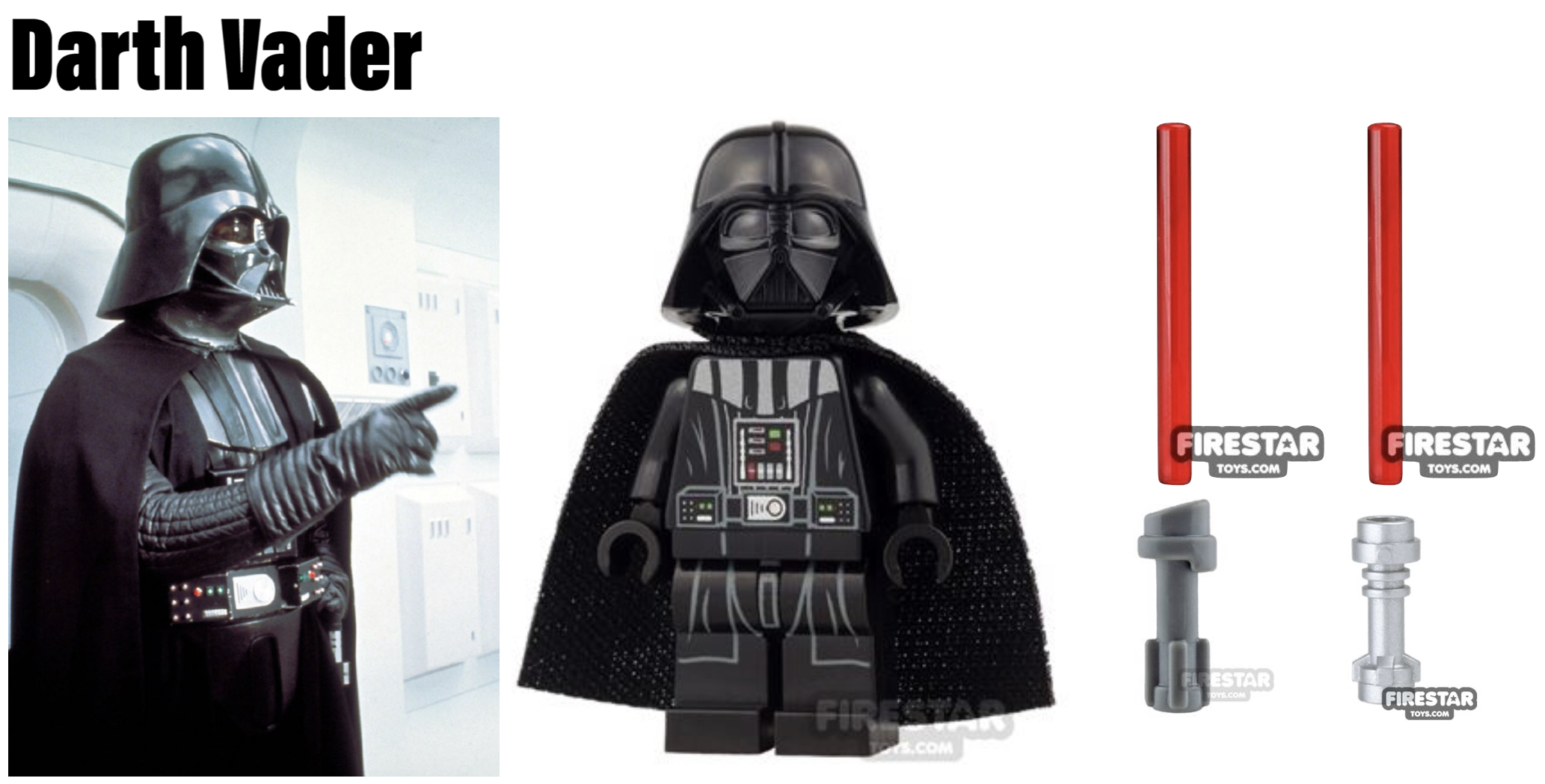 I suggest getting the most recent Darth Vader. The new arm printing makes the minifigure look impeccable. Then consider purchasing an evil apprentice hilt and red blade piece to recreate his lightsaber. He is a must have if you want to recreate your own LEGO Death Star Conference Room. 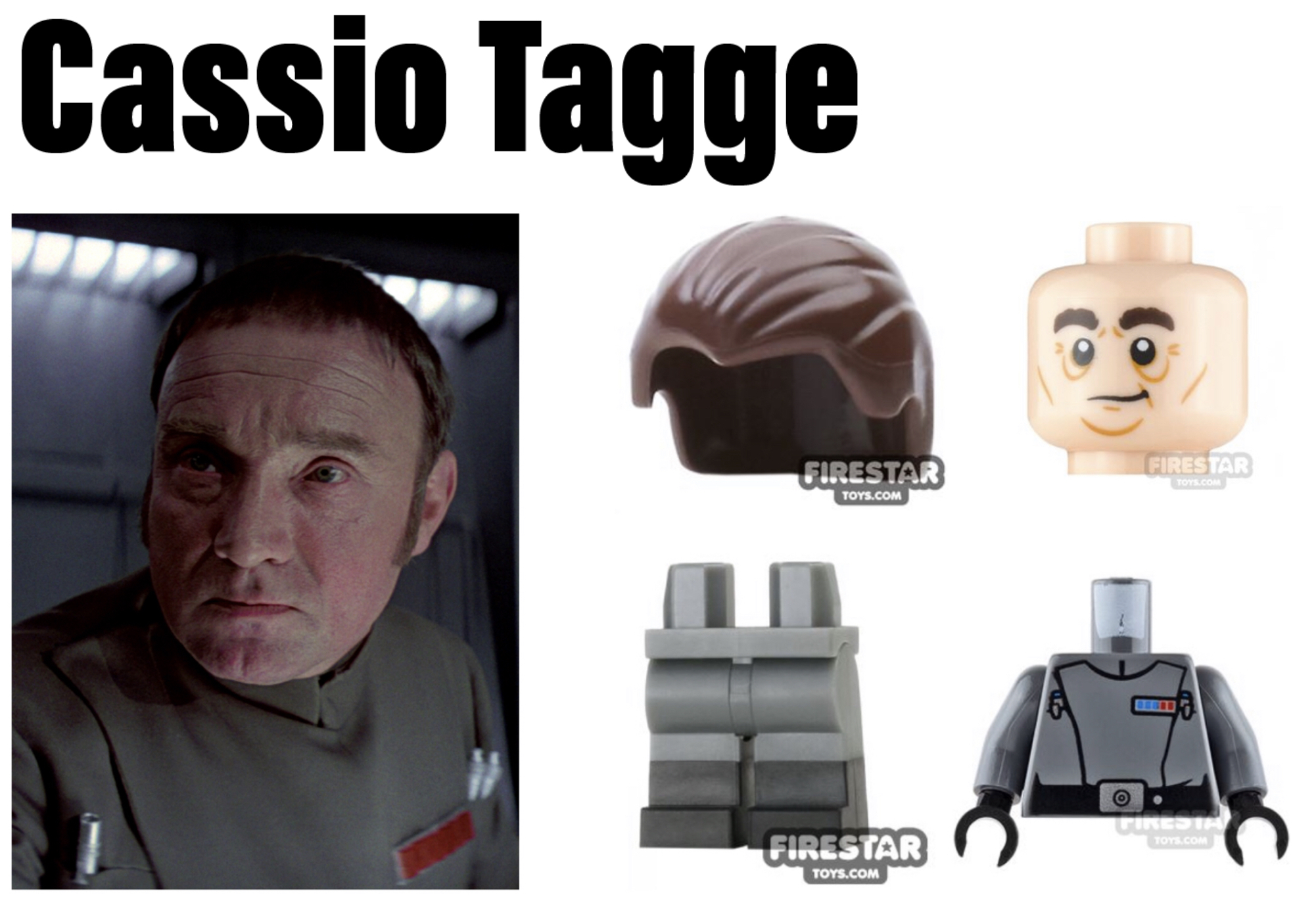 High General Cassio Tagge was born on the planet Tepasi. Unlike Grand Moff Tarkin, Tagge left the Death Star before it was destroyed during the battle of Yavin. Kireon Gillan was able to bring the character into his Darth Vader comic. If you want to create your own Tagge minifigure, I suggest using a serious face and a swept-back hair piece in reddish-brown. 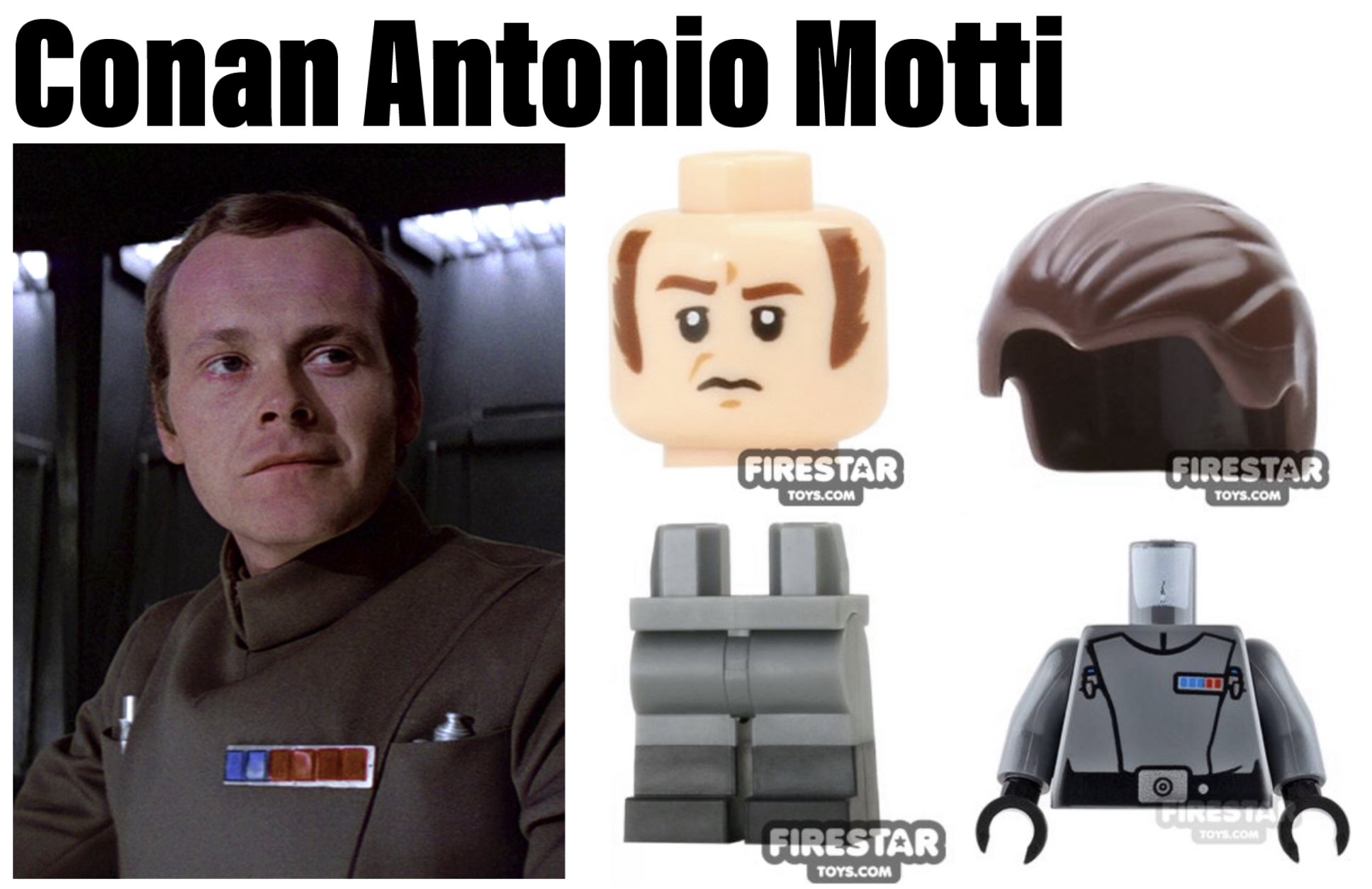 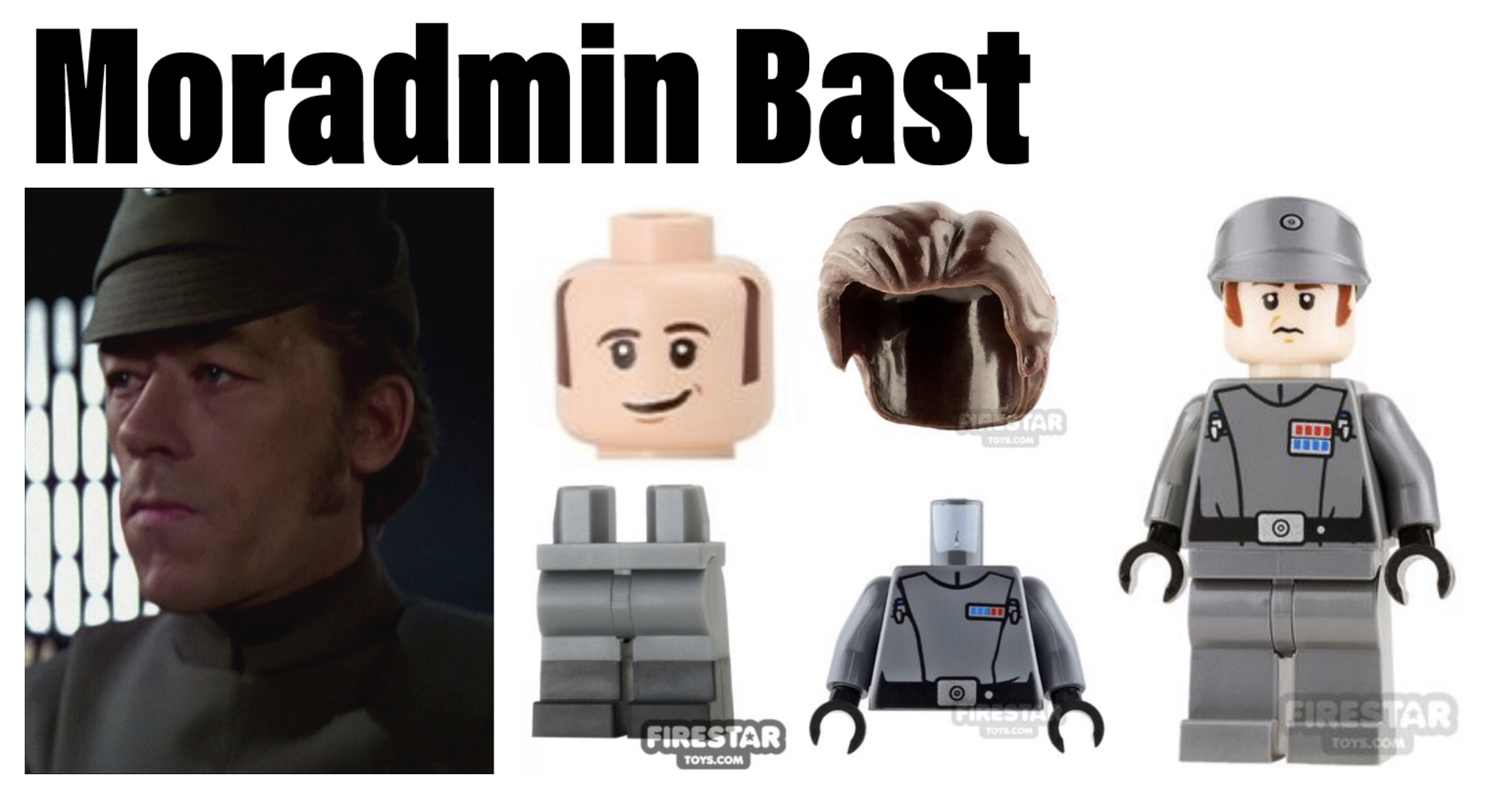 Moradmin Bast was the imperial Chief that advised Grand Moff Tarkin to evacuate shortly before the rebel alliance destroyed the Death Star. He sat next to Cassio Tagge in the Death Star Conference room. If you want to create your own Chief Bast minifigure I recommend purchasing a LEGO Imperial Officer minifigure. Then switch out the head for a smiling head piece with brown sideburns. Most of the time, Moradmin Best can be seen wearing an Imperial officer’s hat. However, if you wish to recreate a hatless look, I suggest using a reddish-brown hair piece with side parting. 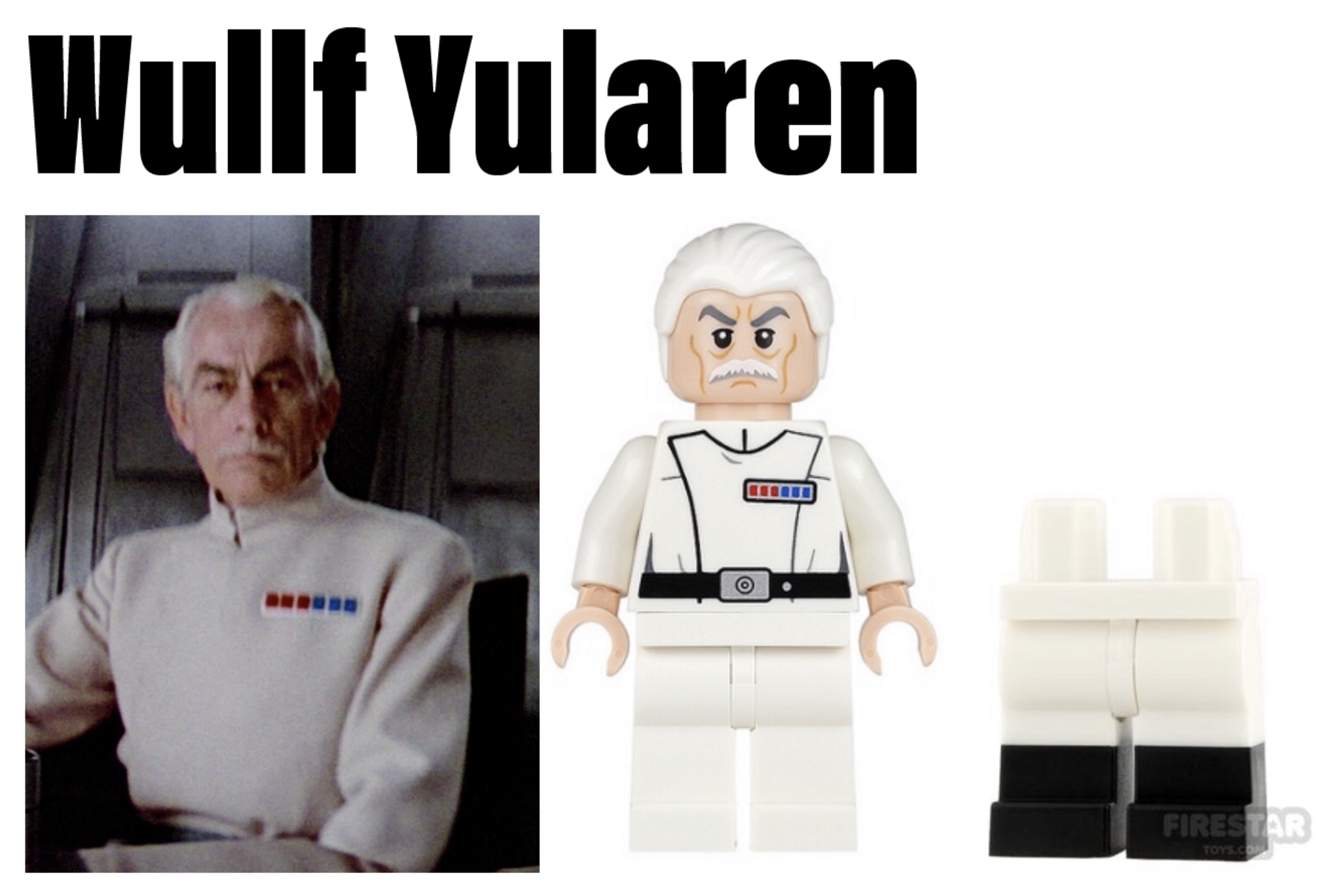 Colonel Yularen was a senior member of the Imperial Security Bureau (or ISB). The character’s backstory was heavily fleshed out by Dave Filioni in the animated Clone Wars TV series. Yularen served as an Admiral in the Republic Navy alongside General Anakin Skywalker. The character’s first chronological appearance was in the Season 2 episode, “Cat and Mouse”. Yularen continued to serve the Empire after the Clone Wars ended. Back in 2017, Yularen appeared in the Star Wars Rebels episode, “Through Imperial Eyes”. Sadly, Yularen died as he was present on the Death Star during the battle of Yavin. Fortunately, there is a good chance that Admiral Yularen will continue to feature in Star Wars stories. Star Wars author Timothy Zahn has hinted that he’d like to write a book about Yularen at some point in the future. 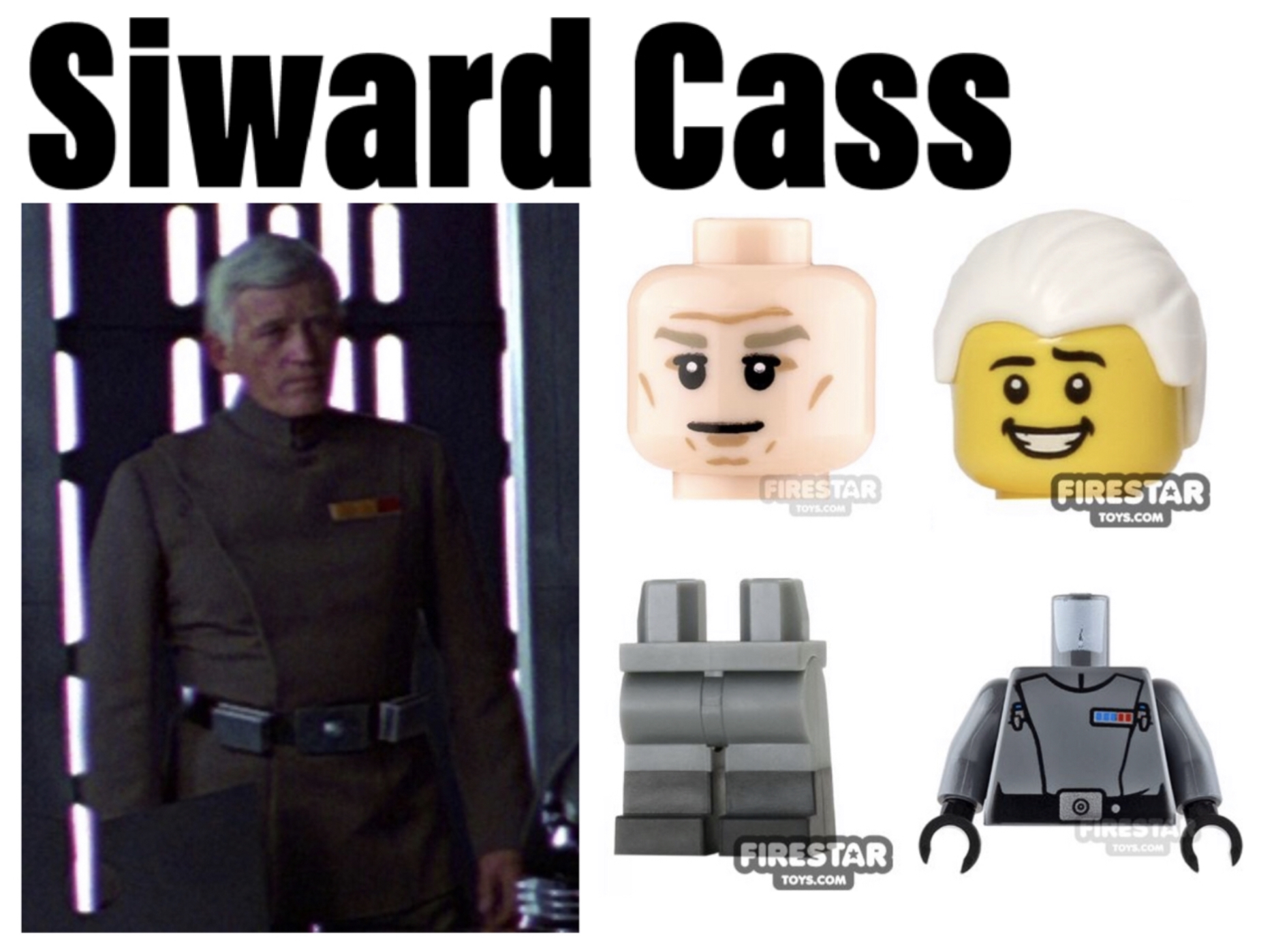 Siward Chass served the Galactic Empire as an Imperial Chief. He was the Imperial officer that informed Grand Moff Tarkin that the Rebel base on Dantooine had been abandoned. Creating your own Siward Cass minifigure is remarkably simple. I recommend using a stern face and a swept back white hair piece to recreate the character’s wizened look. 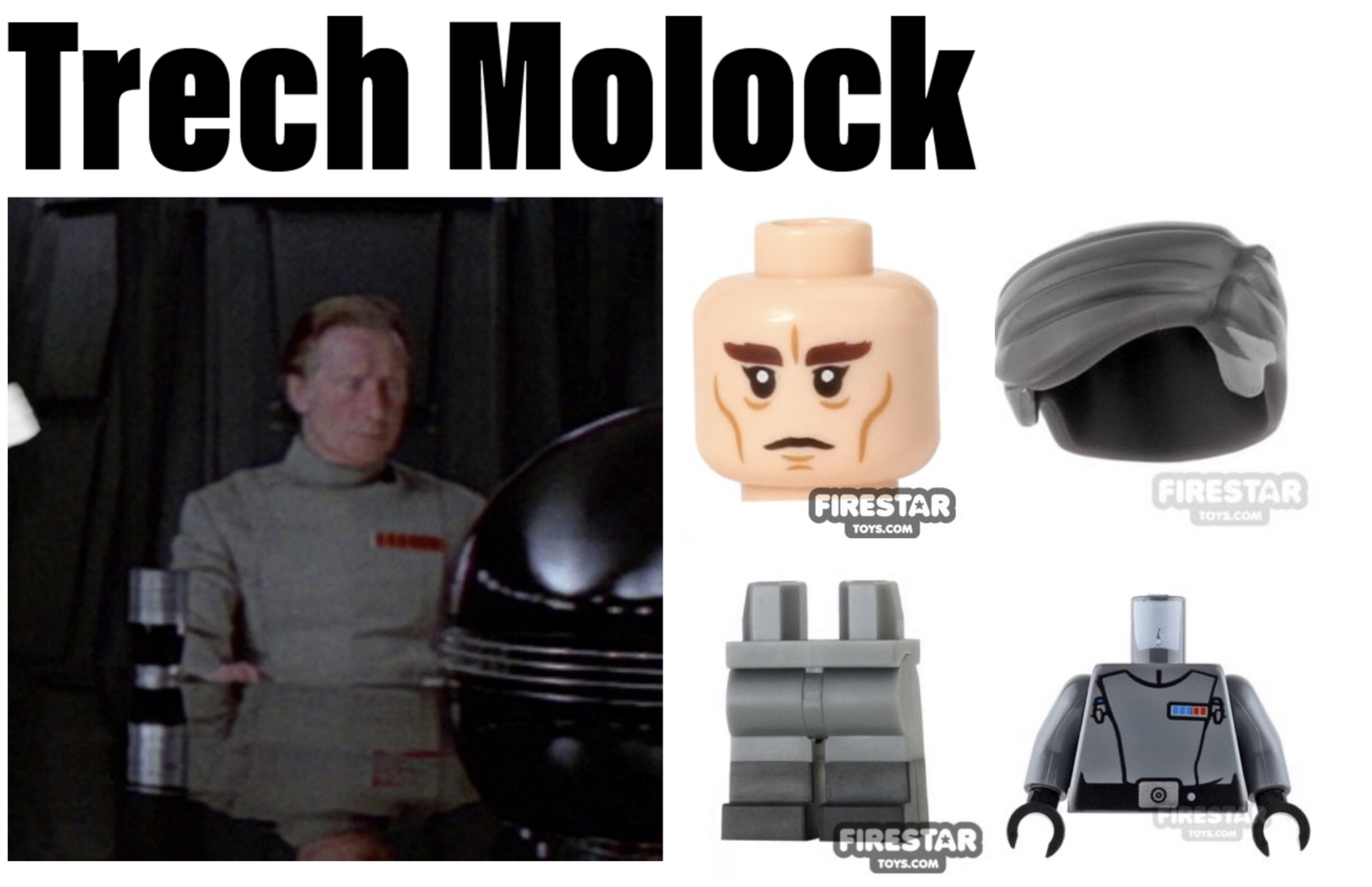 Trech Molock was an Imperial General. He was in the Death Star Conference scene in A New Hope, although his character had no lines. If you wish to recreate this minifigure I suggest using a heavy eye brow face to capture the characters wild countenance. Then use a dark grey hairpiece with light bluish grey patches to complete the look. 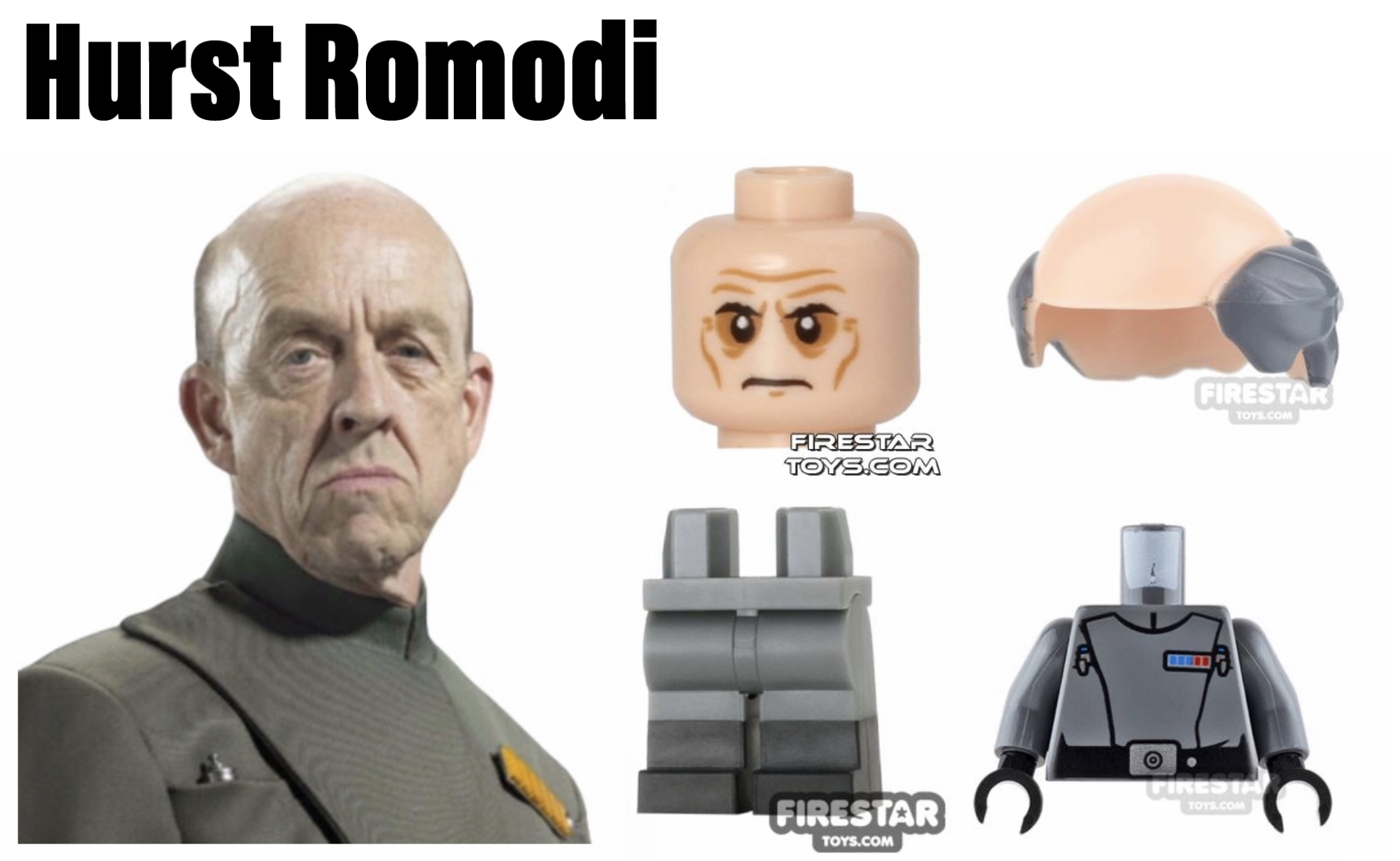 Hurst Romodi served the Grand Army of the Republic before becoming a General for the Galactic Empire. The character never spoke in A New Hope although he was present during the Death Star Conference scene. He made a cameo appearance during Rogue One, and was supposedly chosen as he was the “easiest” Imperial Officer to recast. If you wish to create your own Hurst Romodi minifigure, I suggest using the Mandarin head piece. Then add a bald hair piece.

The Death Star Conference room has twelve chairs. However, in the scene, only nine of these chairs are occupied. If you want to be accurate to the movie, then you should leave three chairs empty. However, it’s fun to ask who should have occupied the empty chairs? What minifigures could you add to fill out the scene? 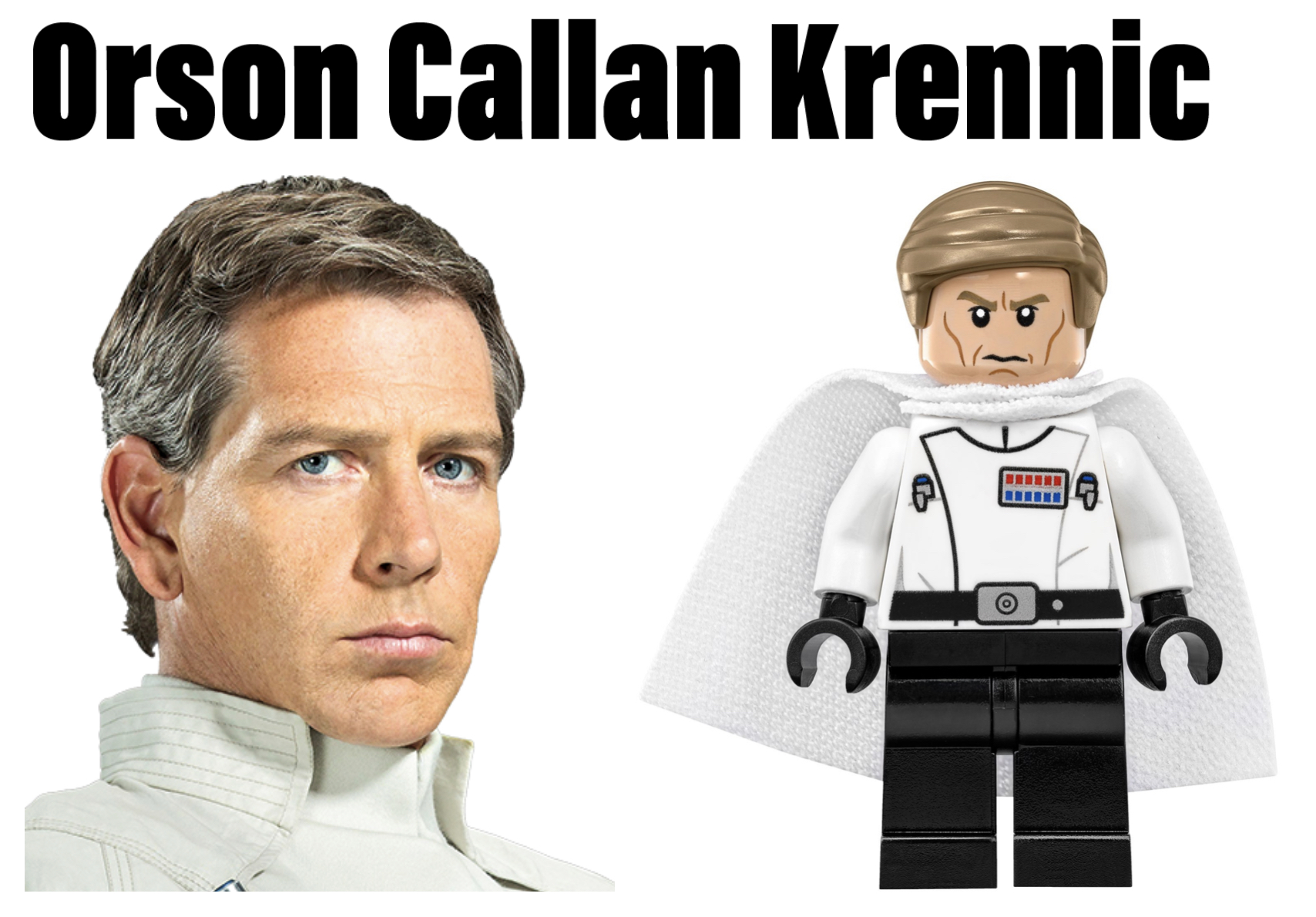 Many fans have argued that the empty seat next to Tarkin was meant to be Director Krennic’s chair. Orson Callan Krennic was the Director of the Imperial Military Department of Advanced Weapons Research. He was flanked by a squadron of highly trained soldiers known as Death Troopers. He was the imperial that recruited Galen Erso to work on developing the Death Star super-laser, and he was known to have a fierce rivalry with Grand Moff Tarkin. LEGO released a Krennic minifigure in set 75156, Krennic’s Shuttle. I recommend adding this minifigure to your diorama if you wish to fill one of the empty chairs.

Thanks for reading. Do you have a favourite Imperial Officer? Do you think I could have chosen more accurate parts? Please let me know in the comments section. Keep reading FireStar Toys for more articles on recreating Star Wars scenes. If you haven’t already, check out my article on the Empire Strikes Back Bounty Hunters. It was one of the first articles I wrote and I’m still very proud of it.

The images in this article were taken from Brickset and Wookiepedia unless otherwise stated.