Are these the droids your looking for? Over the years LEGO has included a whole host of droid minifigures and micro builds in Sandcrawler sets. Which of these droids could actually be seen in the Sandcrawler? Which of these droids can be spotted roaming the streets of Mos Eisley? Are there droids LEGO made up entirely? This article will identify all the LEGO droids you need to recreate the iconic Sandcrawler scene from A New Hope. If you enjoy this article consider checking out my other articles on recreating Star Wars scenes (my article on the Empire Strikes Back bounty hunters would be a good place to start). 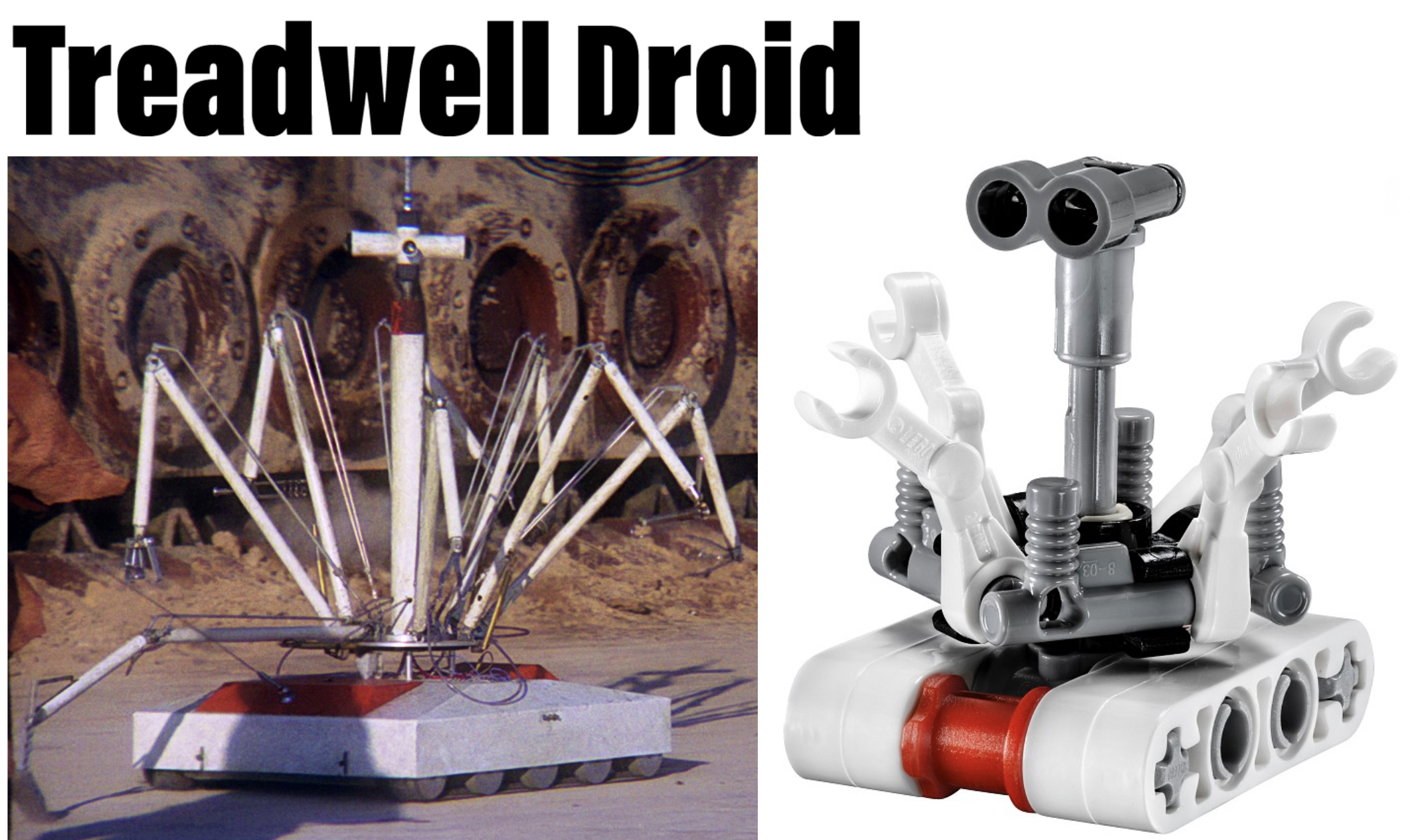 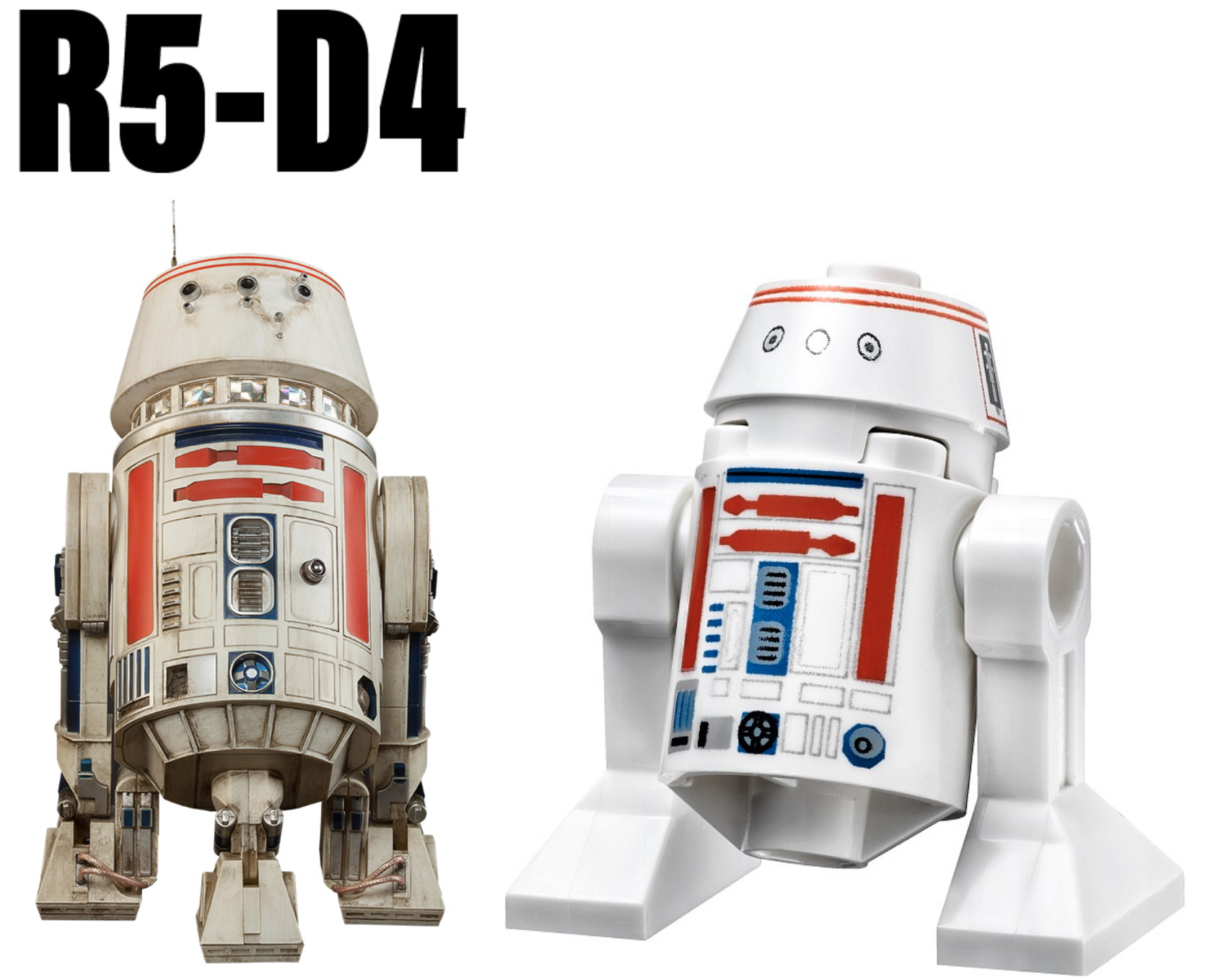 Owen Lars purchased R5-D4 from the Jawas. Unfortunately, the astromech unit had a bad motivator and R5 was exchanged for R2-D2. After the fall of the Empire, R5-D4 could be seen roaming around in the Mos Eisley Cantina (see if you can spot him in Chapter 5 of the Mandalorian). R5-D4 was included in the UCS Sandcrawler. 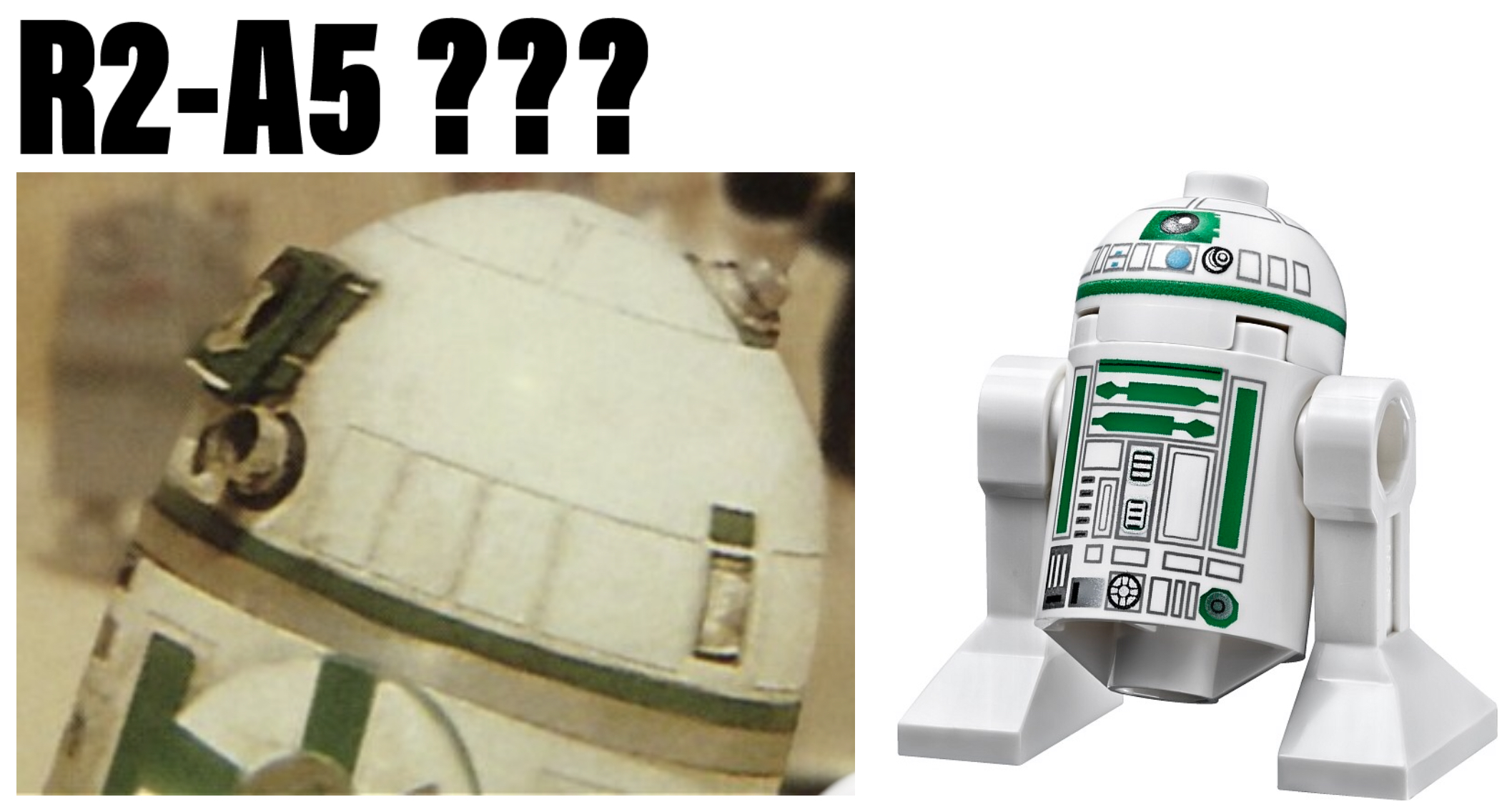 An unidentified green astromech droid was included in the 2014 UCS Sandcrawler. Although LEGO didn’t identify the droid as R2-A5, the markings and green colour scheme match the droid’s appearance. R2-A5 was never in the Sandcrawler scene. The character was a background droid that could be spotted in Mos Eisley during A New Hope. Although the minifigure is well-made, this character isn’t accurate to the Sandcrawler scene.

Fun fact: R2-A5 was actually removed in the Star Wars special editions. The droid was replaced by a CGI Ronto. 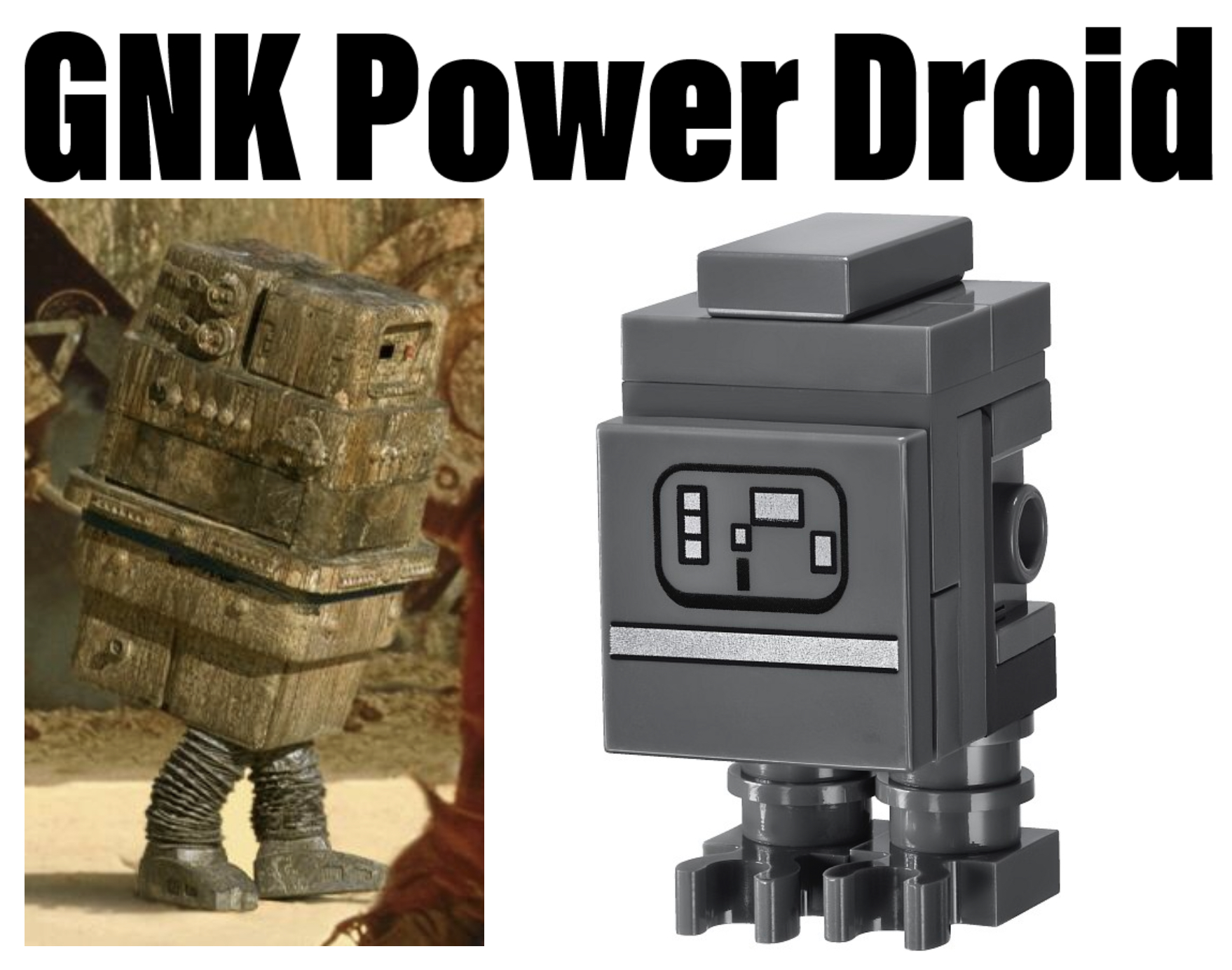 GNK Power Droids, more commonly known as “Gonk” droids were walking batteries. They were used to charge vehicles and machinery across the galaxy. I don’t think there was a Gonk droid on the Sandcrawler in A New Hope. However, a Gonk droid can be spotted walking behind Aunt Beru in the Lars homestead. LEGO has depicted several Gonk droids over the years. My favourite LEGO Gonk droid was included in the 2014 UCS Sandcrawler. The grey colour scheme and printed tile is iconic in my opinion. This minifigure is a must have for any LEGO Star Wars collector.

Fun fact: A Christmas Gonk droid will be included in the 2020 LEGO Star Wars Advent Calendar. 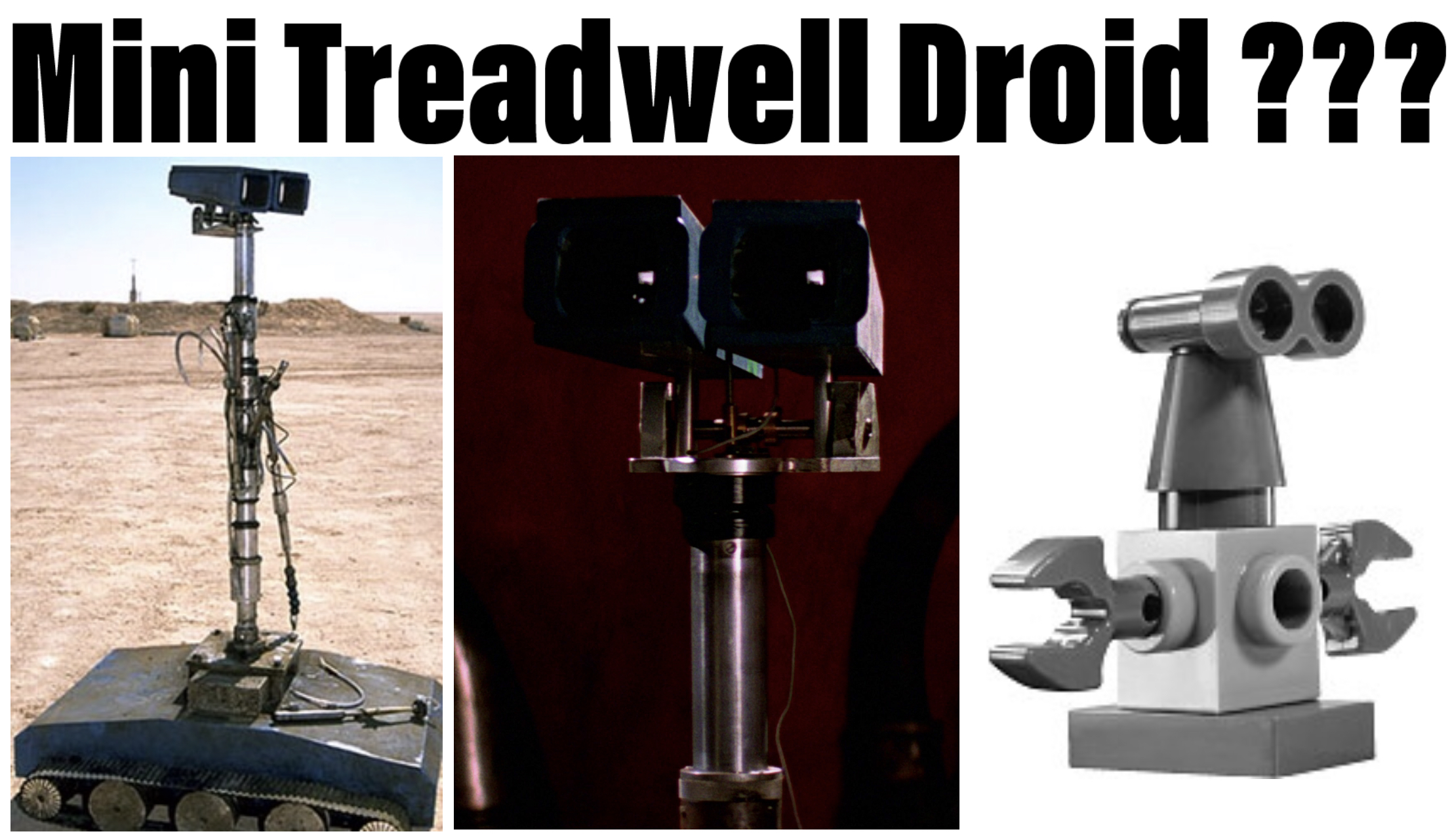 LEGO included a “Mini Treadwell Droid” in the 2014 UCS Sandcrawler. I’m not really sure what this is based off. This could possibly be accurate to the Sandcrawler scene in A New Hope but I’m genuinely not sure. Do you know what it’s meant to be? Please let me know in the comments section as I haven’t the foggiest idea. 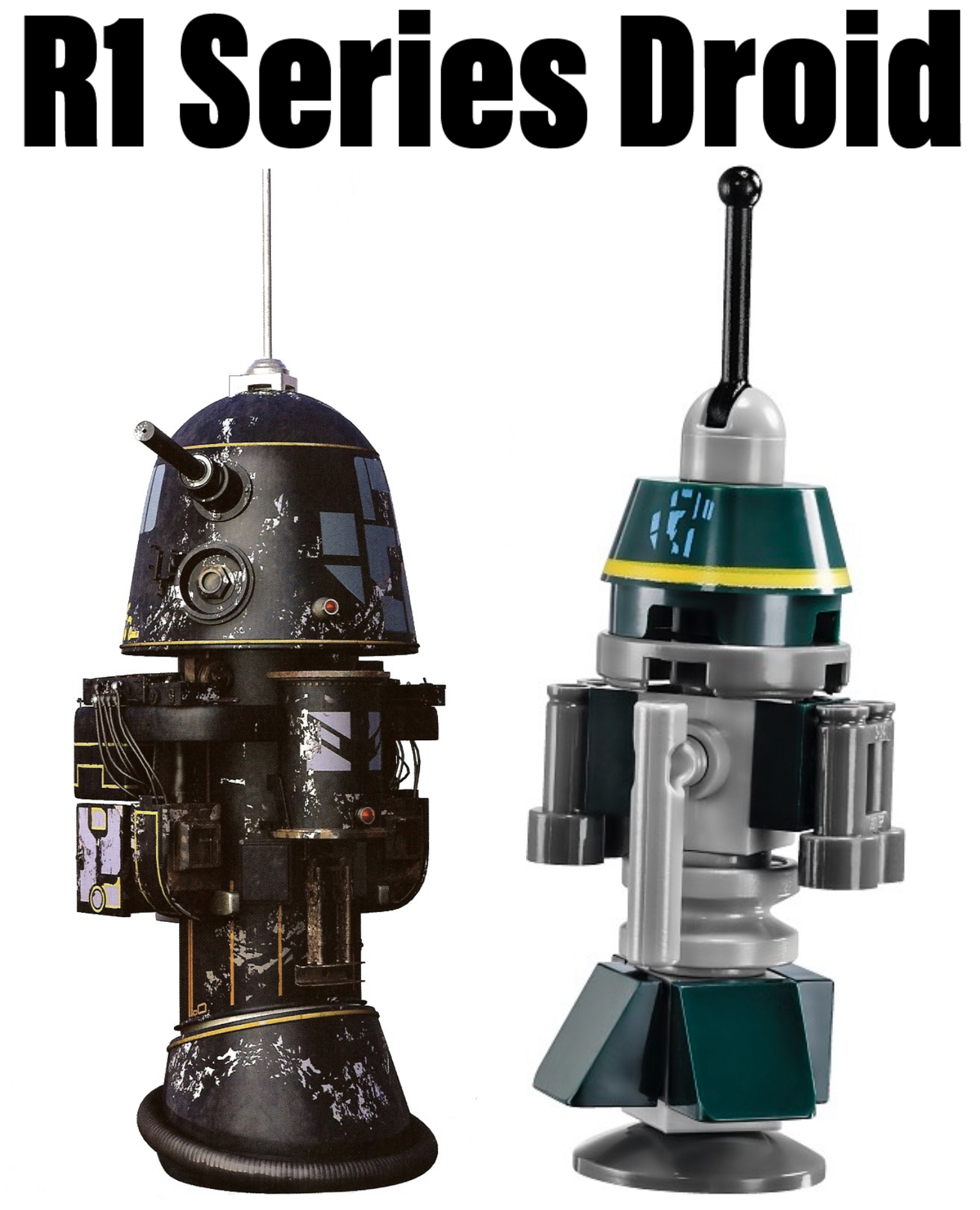 The R1 Series droid is one of the funniest things in the Star Wars Universe. An astromech in the R series, it was a predecessor to the R2 unit. It travelled slowly, hopping around on its one and only mechanical foot. It was one of the Galaxy’s oldest astromech models. LEGO included a green R1 Unit in the 2014 UCS Sandcrawler. This is one of the droids you’re looking for to recreate the iconic Sandcrawler scene from A New Hope in LEGO form. 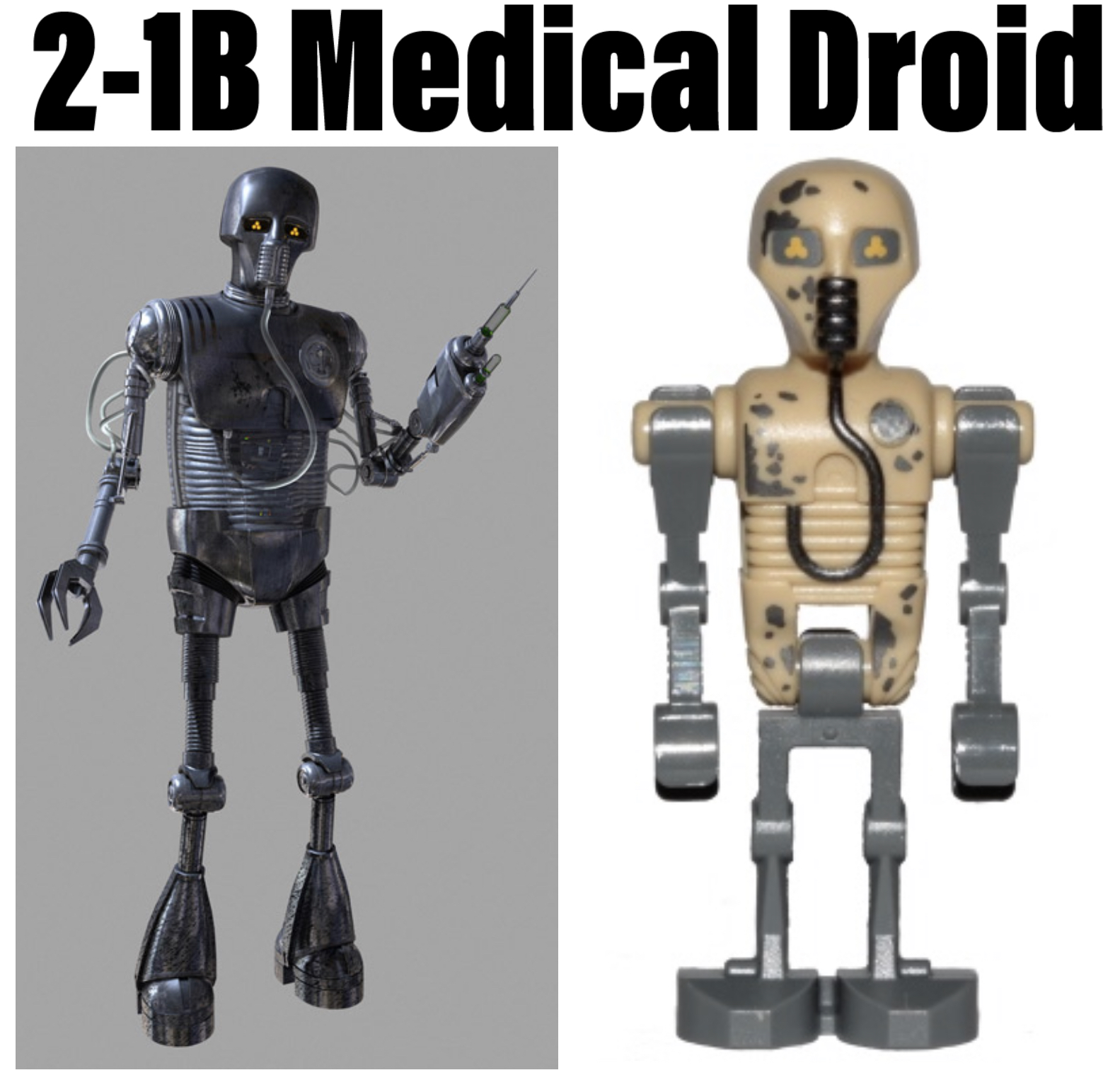 LEGO included a 2-1B medical droid in the 2018 play scale Sandcrawler (set 75220). This was a bizarre inclusion on LEGO’s part as the 2-1B medical droid was first introduced in Empire Strikes Back. This means they weren’t in seen in A New Hope at all. There also doesn’t seem to be any reference material for a battered tan medical droid. The LEGO designers must have plucked the idea from thin air. Although the droid isn’t accurate to the scene it would still make a cool addition to any Sandcrawler diorama. 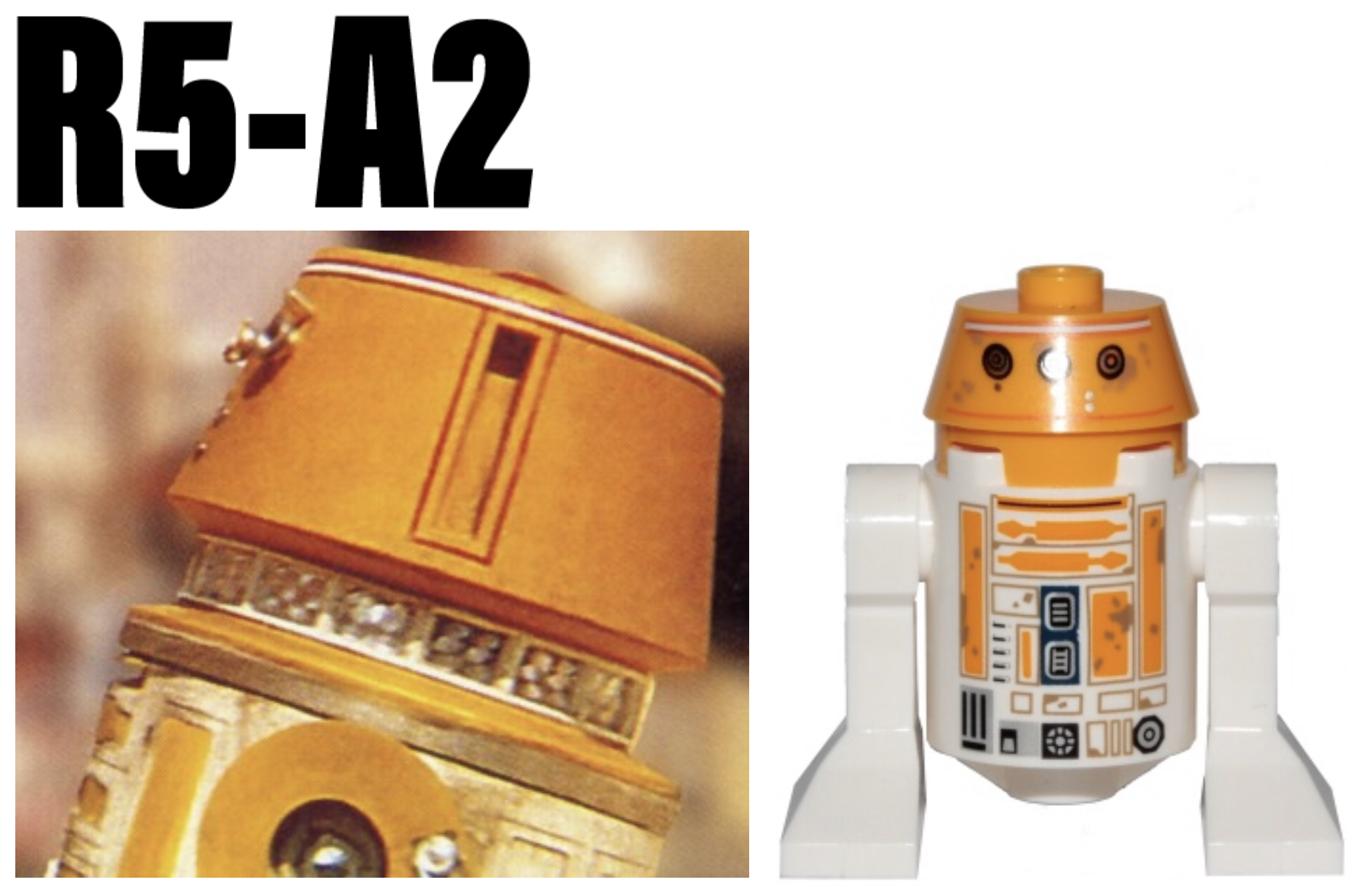 The 2018 LEGO Sandcrawler included an orange astromech droid called “R5-A2’. This droid wasn’t present on the Sandcrawler in A New Hope. It could be spotted rolling around Mos Eisley whilst Luke and Ben were being questioned by a Stormtrooper patrol. 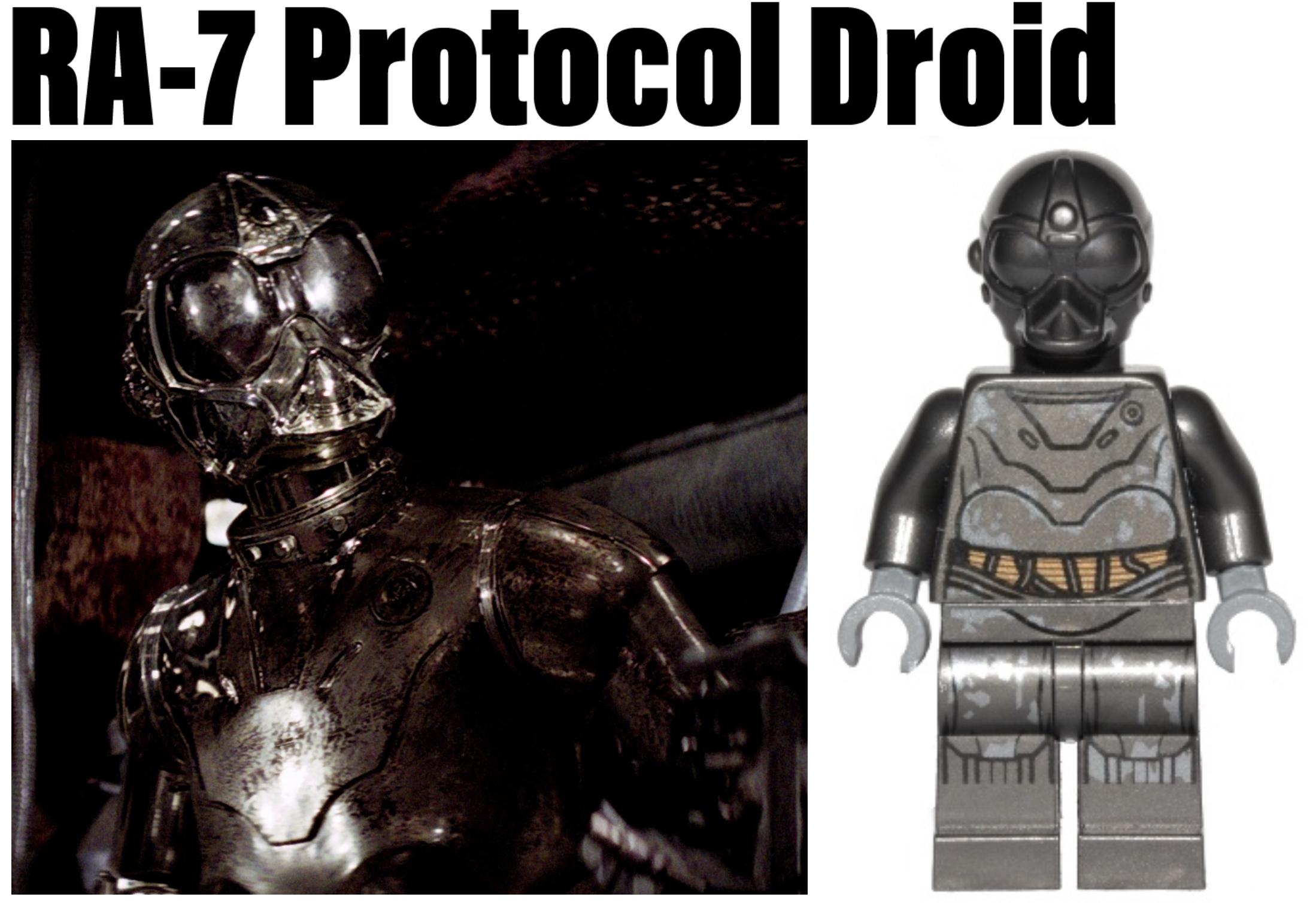 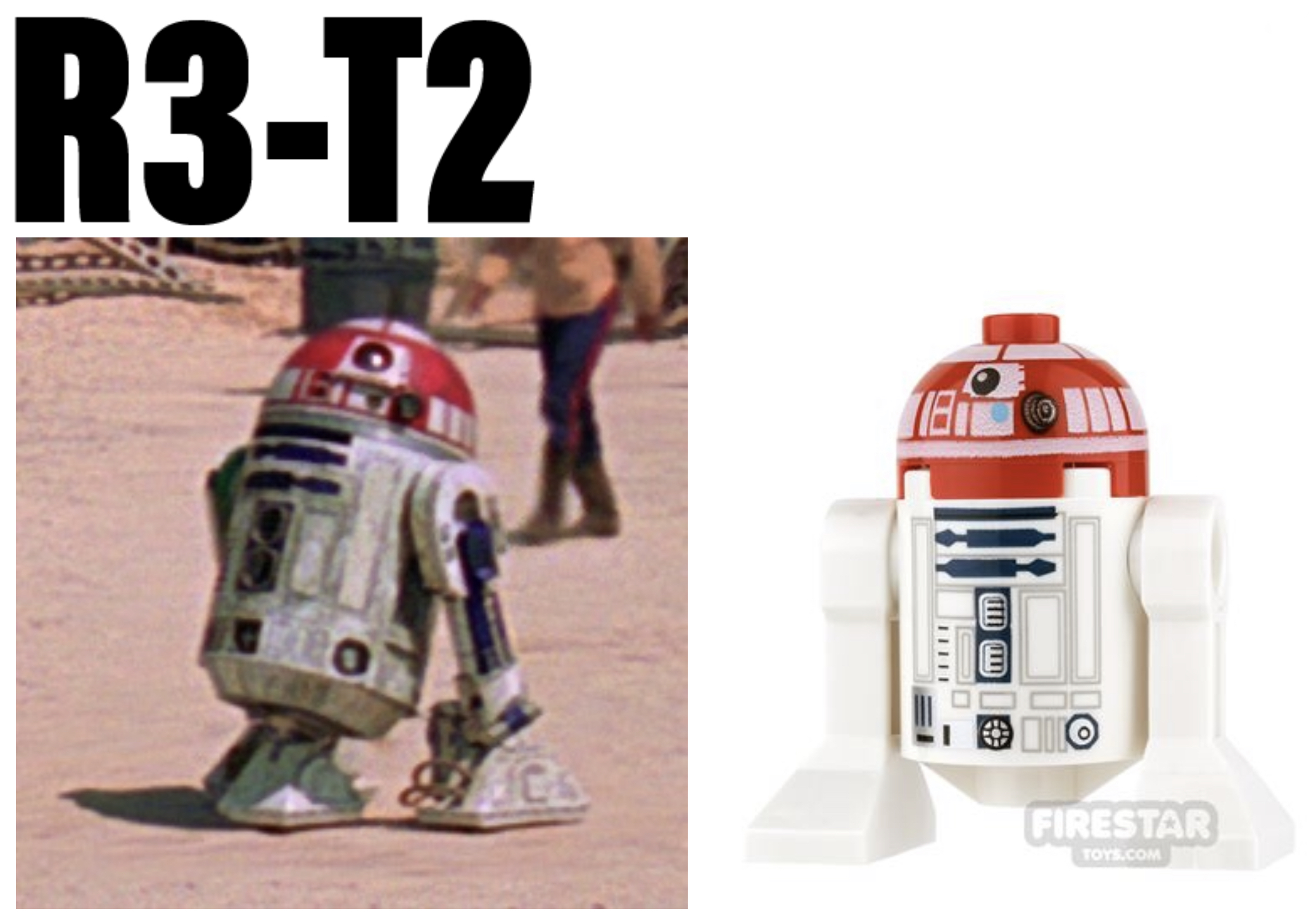 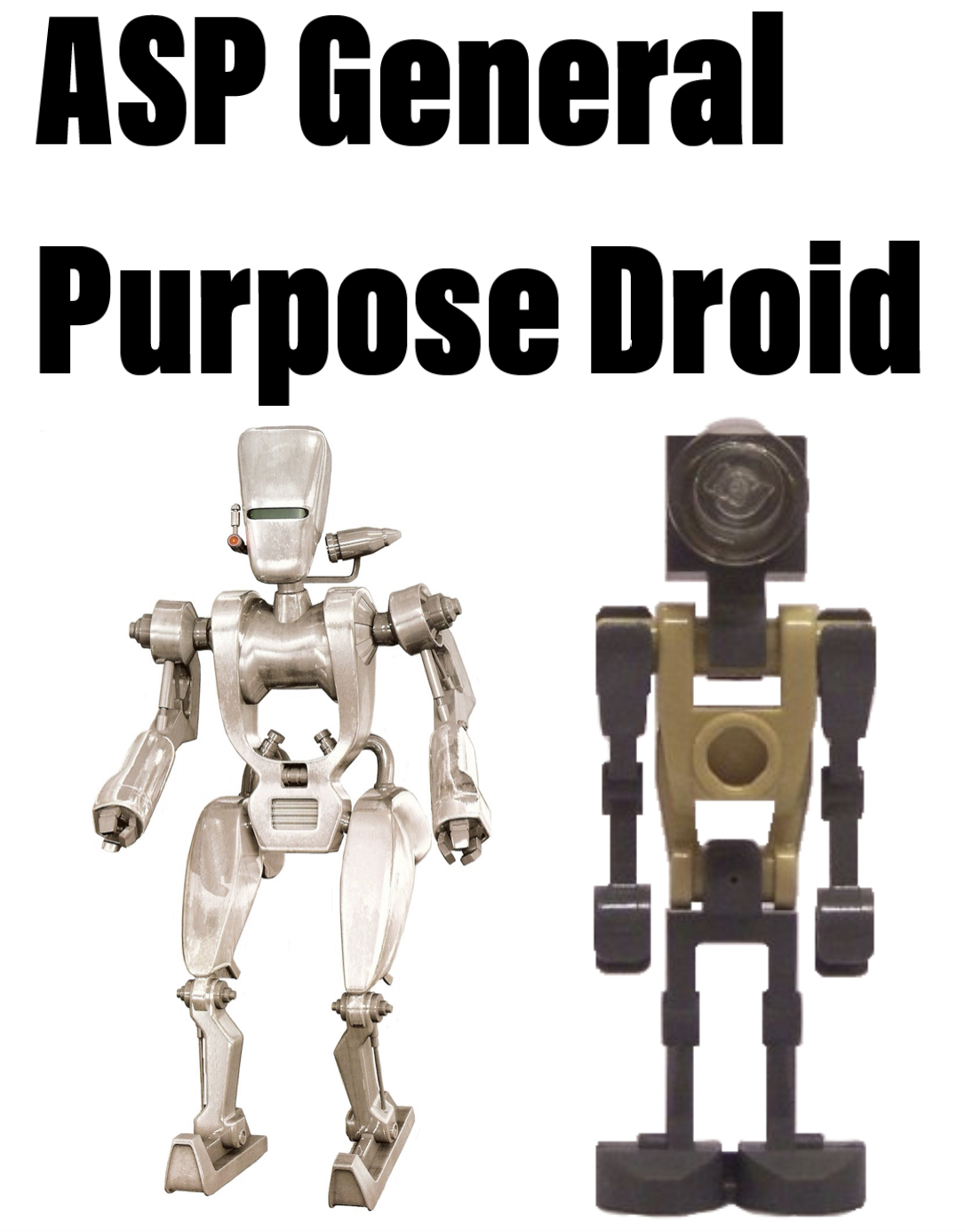 The first LEGO Sandcrawler set was released in 2005. This set came with an ASP General Purpose droid. ASP droids were added to A New Hope in the 1997 Special Edition release. They could be seen in the background of Mos Eisley. However, I don’t think they were added to the Sandcrawler scene. This minifigure looks quite dated now. Hopefully LEGO will release an updated version of the minifigure in the future.

If you want to buy any of the droids or minifigures in this article try using the hyperlinks that are embedded within this article. FireStar Toys sell over hundreds of minifigures so they may well have the droid you’re looking for!

Thanks for reading. I hope you learned something new about the many droids of Mos Eisley. Keep reading FireStar Toys blogs for new LEGO Star Wars articles. In the meantime, consider checking out some of our other articles. Will wrote a great article on potential LEGO Star Wars mosaics and busts that I recommend you check out.

Do you have a favourite Star Wars droid? Let me know in the comments section below.

Images in this article were taken from Wookieepedia and Brickset. I also used these sites whilst researching for the article.