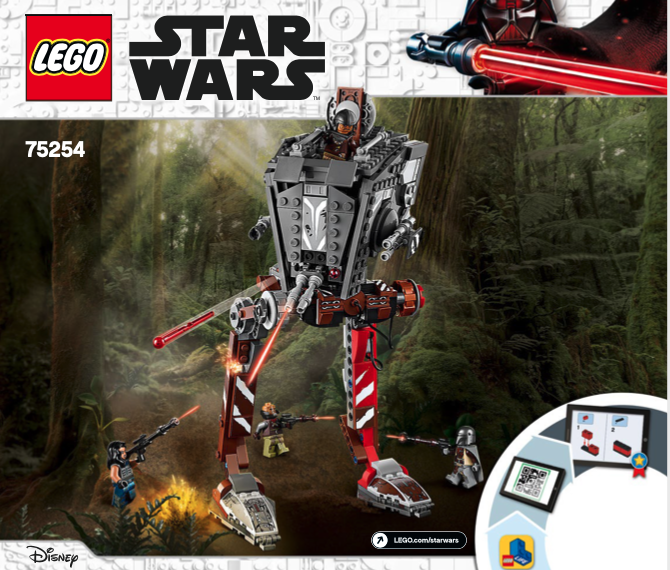 Though I am reviewing the LEGO AT-ST Raider set itself in this article, there are minor spoilers for The Mandalorian show, but only in regard to this set.

LEGO has released five minifigure scale Star Wars AT-ST walkers over the years, not including small sets or the UCS AT-ST released in 2006. The first release was in 2001, and was modeled after the walker from Return of the Jedi. That set included a Chewbacca minifigure. This fall 2019, LEGO released the most recent AT-ST. Modeled after a walker yet to be seen in The Mandalorian, a Disney+ show, this walker is a raider variant.

I recently purchased the LEGO AT-ST Raider (#75254). I admit that I bought the set primarily for the Mandalorian minifigure. The minifigure alone is going for about $12.87 USD on  Bricklink. This is a fourth of the overall cost of the set new from Amazon. Therefore, I decided it was more economical to purchase the entire set, given that it includes three other minifigures and 540 pieces.

I presume that this LEGO set is based on a future episode of The Mandalorian. This is because the first episode of the show did not feature an AT-ST walker, or three out of the four characters depicted in this set. Despite a lack of context, the minifigures look great. 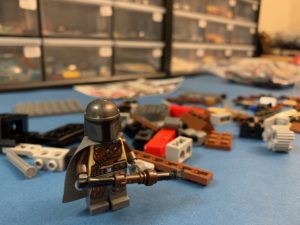 The titular Mandalorian is fantastic. The torso and leg printing is typical of the quality I usually see from LEGO. Despite the back being covered by a cape, the torso printing continues from front to back. The cape is narrower than a normal LEGO cape, but it works perfectly to mirror the on-screen cape. Beneath the Mandalorian’s helmet is an all-black head. It is heavily implied in the show that true Mandalorians never remove their helmets. In any case, seeing as no one knows what he looks like, I find it acceptable to not have a printed head, though I do prefer them. The Mandalorian’s pulse rifle is brick built from a mini blaster, lightsaber hilt, and pronged piece. In all, this is an excellent addition to anyone’s Star Wars minifigure collection.

Next up is Cara Dune. From the AT-ST Raider box art alone, I would guess her character is an ally of the Mandalorian. (She also did not show up in the first episode.) She has a dual sided head, one smiling, one angry/intense. Her torso printing is also front to back, and continues on her legs. The hairpiece is not new. Her weapon is a long blaster with a lightsaber hilt added to the end. I presume she is likewise screen accurate.

Finally we have two that are “Klatooinian raiders”. Their torsos are printed front to back and are slightly different one to the other. I like this slight bit of variation. Too often villain minifigures feature matching torsos, but for those of us who like to photograph minifigures, any variation is good. Both have leg printing and accessories which include a helmet and blasters. I suppose I will see what these two ruffians are up to when their episode of The Mandalorian airs as they as well have not shown up yet.

I downloaded and perused the instructions for the last two LEGO AT-ST walkers for comparison while I built this one from The Mandalorian. LEGO released a walker for Rogue One that I did not purchase, and half of a walker for The Last Jedi. (In the latter film, it was a First Order walker that BB-8 inadvertently ripped in half.) I will reference those two in a bit.

The AT-ST Raider set comes in four bags, with instructions and sticker sheet. 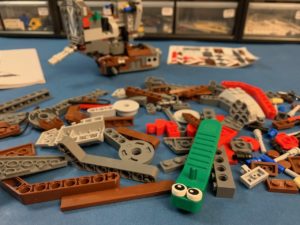 First, the walker build begins with the base for the cockpit and the Mandalorian himself. The build is varied and interesting, with plenty of different colors and brick built greebles and other details. A few stickers are applied to tiles for added detailing, and while I usually don’t apply stickers, I did this time. They add just enough to the build without being in-your-face about the fact that they are stickers. Overall, I prefer printed bricks, but stickers are a LEGO reality.

Second, the build progresses with the lower half of the cockpit and Cara Dune. Fairly quickly it seems that minifigure scale for this one is a bit generous. The competed AT-ST walker stands as tall as the TIE Fighter set from Rogue One, which seems slightly too big for a “chicken walker”. The slight over-largeness of the set is a recurring theme. I won’t be too harsh about it, but I think the LEGO designers could have made it smaller. Obviously, I think they were trying to hit a price point ($50 USD) and that dictated a certain scale. Also, there were several places throughout the build were multiples of a smaller piece were used instead of a larger, single piece. Did the designers need to hit a certain piece count?

Third is the legs. The right leg is built first, and features brown detailing (perhaps signaling rust?). The left red leg is second. Both legs are essentially identical, except for color. The red leg includes a few black whips which seem to stand in for exposed wiring on the show’s walker, which, again, we will have to wait for a future episode to see.

Fourth and last are the cockpit walls and our Klatooinian raiders. Here again a few stickers detail the striped paint job, but a nice selection of tiles, ingots, and other parts give great detailing. A sticker for the access hatch on the top and the walker is finished! 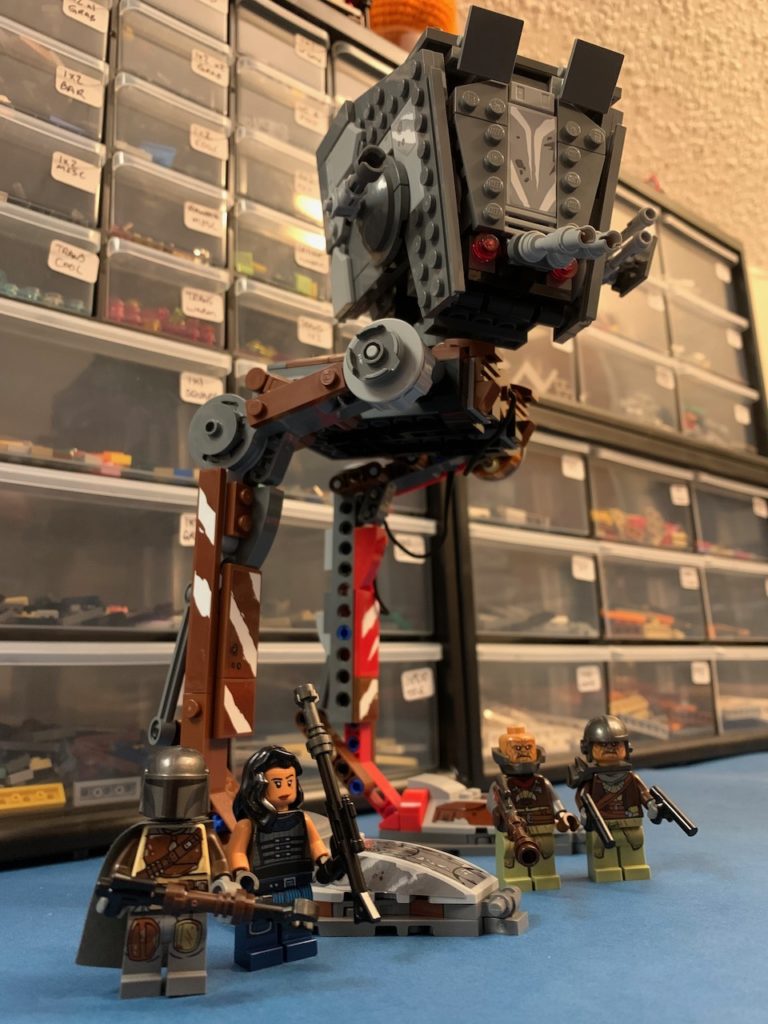 I like the AT-ST Raider. The build is simple enough for not-so-advanced builders. It also includes enough to keep an experienced builder from being bored.

My final gripe is that the walker doesn’t actually walk. You can alter the posing of the legs somewhat, but you risk unbalancing the walker. Overall, though, it doesn’t have actual leg movements that allow for it to walk. For something called an AT-ST walker this seems like a flaw in design. A walking ability could be designed in if it were smaller, and more to scale. In the end, however, we have what we have: a fantastic display piece from the first Star Wars television show. I do so love the coloring and the stripes! It is exactly the modification I would perform if I purchased (or stole) a surplus Imperial walker following the collapse of the Empire.

I mentioned earlier the two previous AT-ST walkers, and here they become relevant. Why? Because all three are, by and large, exactly the same. The Rogue One walker’s cockpit base is slightly shorter, front to back. The Last Jedi walker doesn’t have a completed cockpit. All three have very similar legs. The only real difference between the Rogue One and the Mandalorian walkers is the coloring of the parts, and some minor detailing on the cockpit. Even the internal structures are much the same.

Because of the commonalities to the older walkers, I can’t recommend purchasing the Raider variant if you already own the regular walker from Rogue One. (Writer’s note: I wouldn’t recommend the Last Jedi walker in any case because you only receive half the walker. That was a missed opportunity on LEGO’s part to not create a “tear-away” walker to recreate the actual scene from the film. Alas.) If you have neither walker, then sure, this is a great model to own, plus it is the only way to get the Mandalorian minifigure without resorting to secondary marketplaces.

What do you think of the LEGO AT-ST Raider?

Whichever variant you build, I hope you enjoy it! As always, I look forward to what we can build together!