Twenty years ago this May, the first Star Wars film since 1983’s Return of the Jedi premiered to wild expectations and a fevered desire for more from the galaxy far, far away. With The Phantom Menace, many fans who had grown up with the three films were disappointed. At 12, I was just slightly past the target audience age, and while I thought Jar Jar Binks was odd, I loved the new Star Wars! One of my favorite sequences was the podrace in the middle, and today, I will be talking about the two LEGO Podracers LEGO has released. 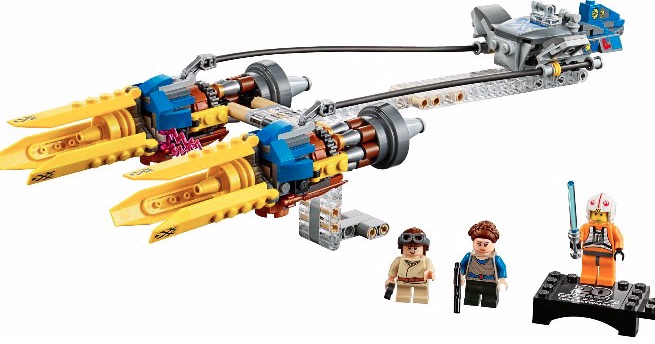 Ever since I first saw Star Wars I loved the design aesthetic: that lived in, old and junky feel to the galaxy. The podrace was that in spades: a bunch of super fast hover pods with massive engines built from this and that. Plus, it was fun and exciting, which is exactly what Star Wars was always about.

LEGO released a licensed theme based on Star Wars that spring, and to no one’s surprise, a key part were two sets of LEGO podracers based on those in the film. One was a set containing only Anakin’s podracer, the other was a keystone set featuring Anakin’s podracer with that of Sebulba’s and Gasgano’s green ‘racer.

This year, LEGO tipped their hat to those sets of old, and released a special line of 20th anniversary sets. One of those released was a new version of Anakin’s podracer. I was curious how this new release would compare to an older ‘racer. Not the first podracer, as honestly LEGO’s podracer design back then was a little clunky, but to a middle release. 2011 was the last major release of a LEGO podracer, and this was a set that included Sebulba’s large orange and black ‘racer and Anakin’s smaller yellow and blue ‘racer. This is the version I wanted to compare to this year’s set. (In my pictures, the 2011 is on the left and 2019 on the right.) 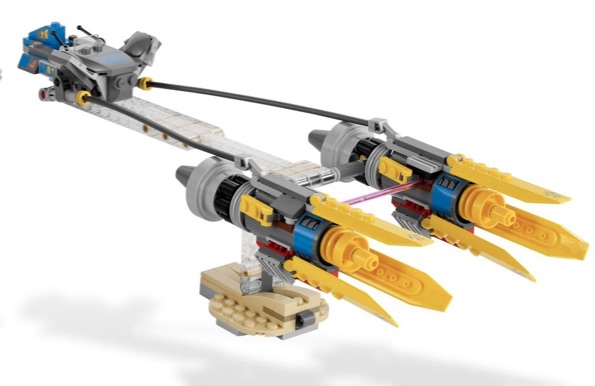 I already own a copy of the 2011 set. It has been a favorite of mine to display, and I considered it a great version. It looked close to the film podracer and was a nice size and proportion. I loved the way that this LEGO podracer incorporated swooshability and display into the design with the clear Technic beams and the little sand dune to “park” it in.

I was honestly skeptical that the new LEGO podracer would be worth it. My thought was that it would be little more than an iteration like so many of the X-wing sets have been. (Honestly, the LEGO X-wing and the snowspeeder seem to be released every other year, and seldom seem to change.) So… would the new podracer measure up, be the same, or would it surpass? I was eager to find out and ordered my set and waited impatiently for it to arrive.

My old LEGO podracer had been disassembled for a recent move, so I had the perfect opportunity to evaluate and compare the two ‘racers. I started by dumping both sets of pieces into two neat piles, and loading up my old instructions on the computer (I don’t keep physical instruction books around).

The new LEGO podracer build instructions had me starting with the pod, or the “cockpit” while the old instructions had me starting with the engines. No matter. I skipped ahead in the new booklet and built the engines first alongside the old engines. Immediately I noticed a difference. The old engines are centered around a large molded fuselage piece, while the new engines are entirely brick built. Furthermore, the old engines were connected by a transparent pink connector, while the new engines would use pink lighting pieces to render the energy band between engines. 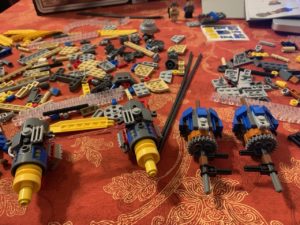 Besides the foundational build, the two sets of engines were remarkably similar, albeit with the updated engines featuring a bit more greebles, details, and dimension. Despite my own inclinations, I found myself preferring the new engines.

Moving on from the engines, I started on the pods. As I build, I found those to be very, very similar. Despite some updated part usage, and some differently colored parts, the two pods are much alike. The stickers were redesigned, which helped alter the look a tiny bit, but really, I feel like LEGO spent most of their design power on the engines. Honestly, though, as the old saying goes “if it ain’t broke, don’t fix it!” and I suppose that is true for the pod. It was a good design to start with. Aside from switching out some old bricks for a few new ones of better design, why change anything? 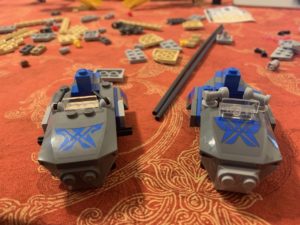 Also largely unchanged are the transparent technic beams connecting the pods to the engines. It was a solid design to begin with, so why alter that? The only difference here is a backward facing beam to better balance the podracer instead of the little sand dune the the old one slotted into. Eh. Six of one, half a dozen of the other. I feel this is arbitrary. I liked the tiny “scenery” for display, but the new build is just different. Take your pick as to which you like best. 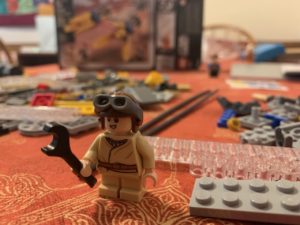 For minifigures, the older set came with 5 – Watto, Sebulba, Anakin, Obi-Wan, and Anakin’s Rodian friend. The new came with three – Anakin, Padme, and the 20th Anniversary re-issue Luke Skywalker in flight suit. The Anakins are very similar, though their helmets are different (grey for old, brown for new). Padme has a new hair mold, but also isn’t much changed from her first issue way back in 1999, albeit with the new short bendy legs, which is cool. I feel she should be taller, but again, I feel that is a style choice. I might swap the short legs for some longer ones later. To each their own.

Obviously, the new LEGO podracer set is supposed to match the 1999 version. That one included Padme and a pit droid along with Anakin Skywalker. I would have liked to see a new pit droid, but being that this 2019 set is a 20th anniversary set it had to include an old figure. Having a classic Luke isn’t terrible. I just think LEGO could have also included a pit droid.

I like the new LEGO podracer better. It has a sleeker, greeblier design, and it looks much closer to the film version. As an outside, non-scientific test I had my wife (also a Star Wars fan) pick her favorite. Without hesitation she chose the newer one, citing the same reasons. 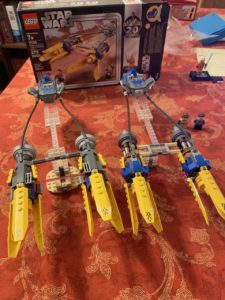 If you have the old one and are wondering about spending the money to upgrade, I can offer a small bit of advice. If you can, sure, upgrade and display the new one and use the old one for parts. At the same time, the older one is great as is, so don’t sweat it. You may even have enough bricks in your collection to redesign the engines with help from the new instructions, which you can download from LEGO. Like I say all the time, the whole point of LEGO is to build your own thing and have fun.

Whatever you chose to build, I look forward to what we can build together!

LEGO Adventurers: Explorers of the Wild and the Unknown