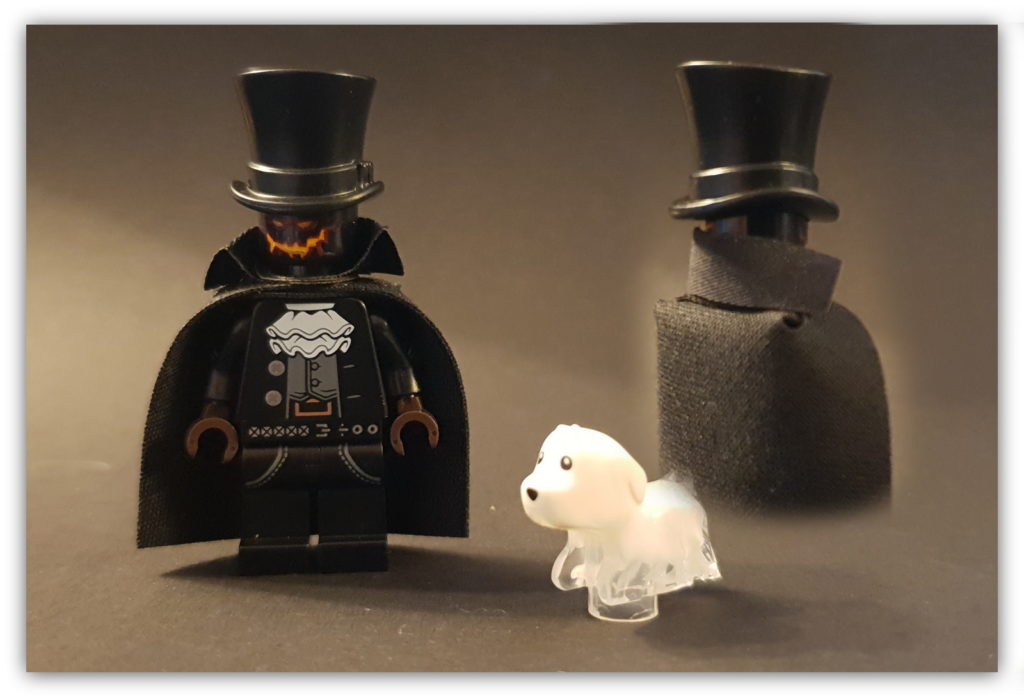 In the classic vampire horror films, Count Dracula always appears with a cape. Similarly, Superman and Batman would be nothing without that shield of cloth that hangs from their shoulders. I was creating the Halloween figure above using accessories from Firestar Toys and I saw the “mod collar”. From that, I started to think about how the LEGO cape, be it official or custom, has changed and what was now available for our figures. 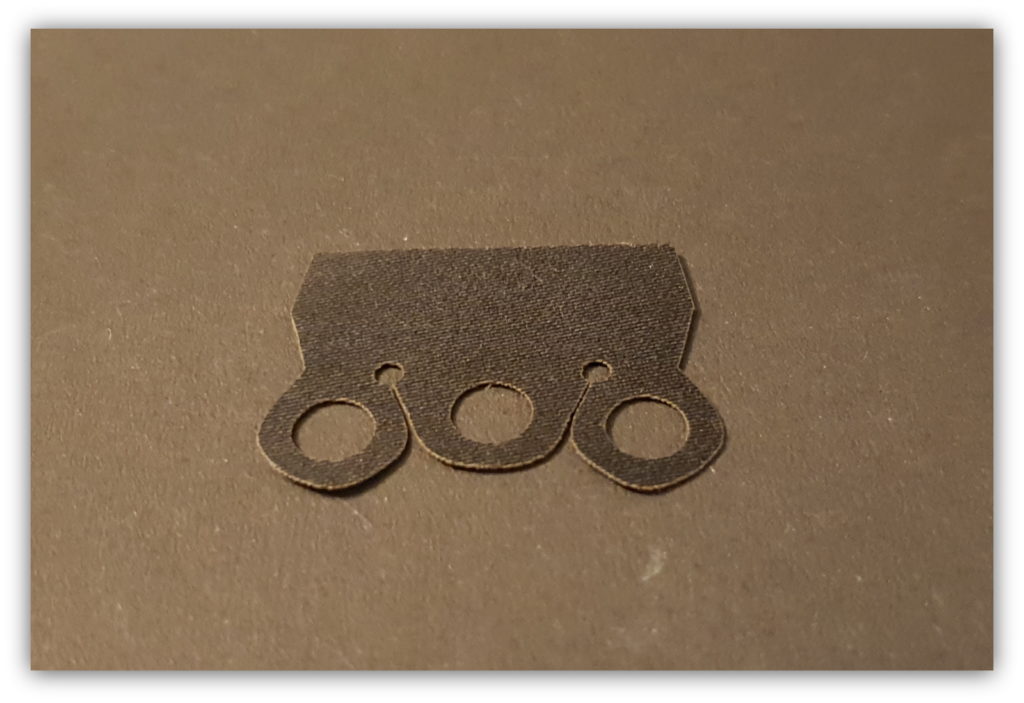 And just for trivia fun, all the headings are the names of real capes around the world. 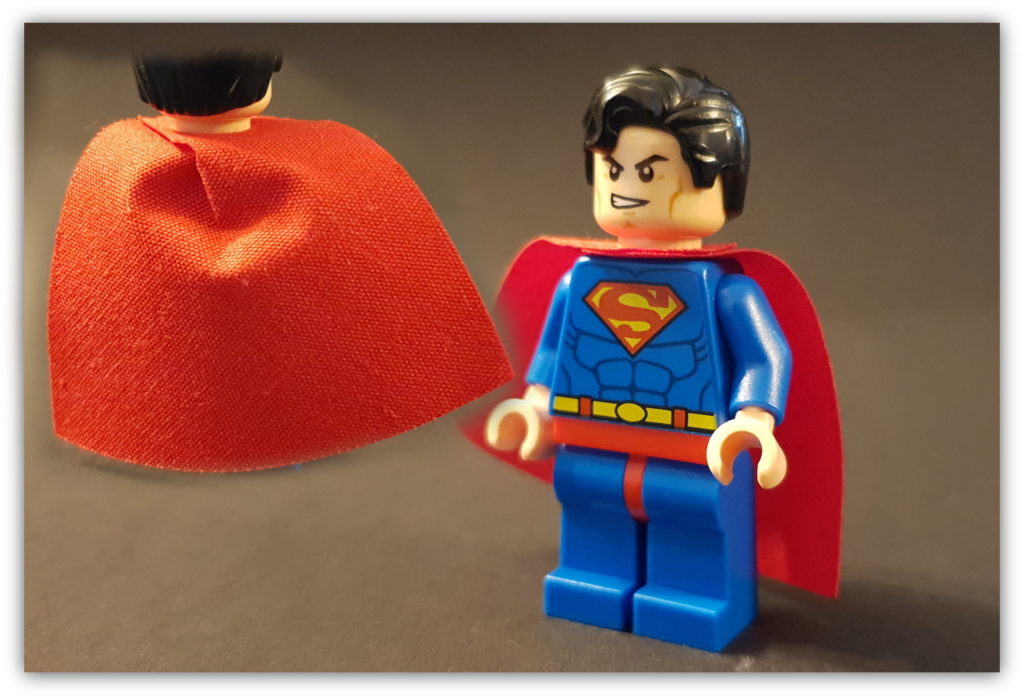 I had thought that the first LEGO cape would be attached to a superhero, but it wasn’t; at least not in the way that we think of today. In fact, the first cape appeared in 1984 as a plastic cape that sat on the back of knights in the castle. It wasn’t until 1993 when the first textile cape was released as part of the Lego Castle set 6076 Dark Dragon’s Den; this was a much simpler design comprising a tear drop shape and a single neck hole. In the late 1990s the design changed to introduce the “two holes with a split” design which has been the standard going forward. 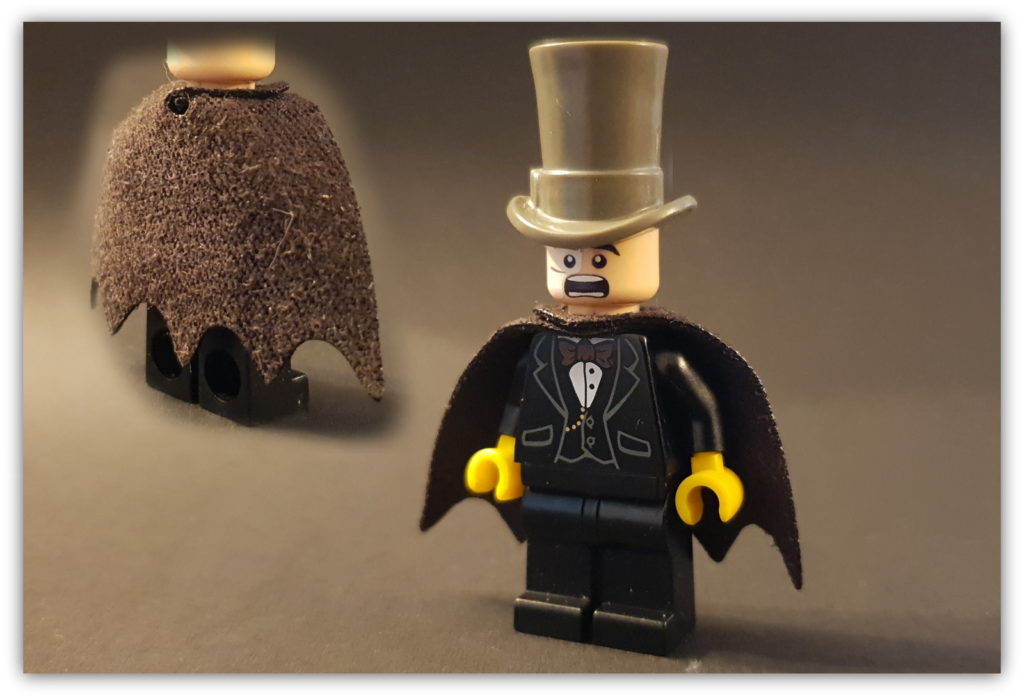 The cape design here is the same two-hole design, but in a thicker cloth. It also has the unusual bottom that is quite like the Batman design. I thought it perfect for this phantom of the opera!

If you look at the image at the start of this article, you’ll note that the cape wraps around the whole body; this used four holes to secure it to the neck. 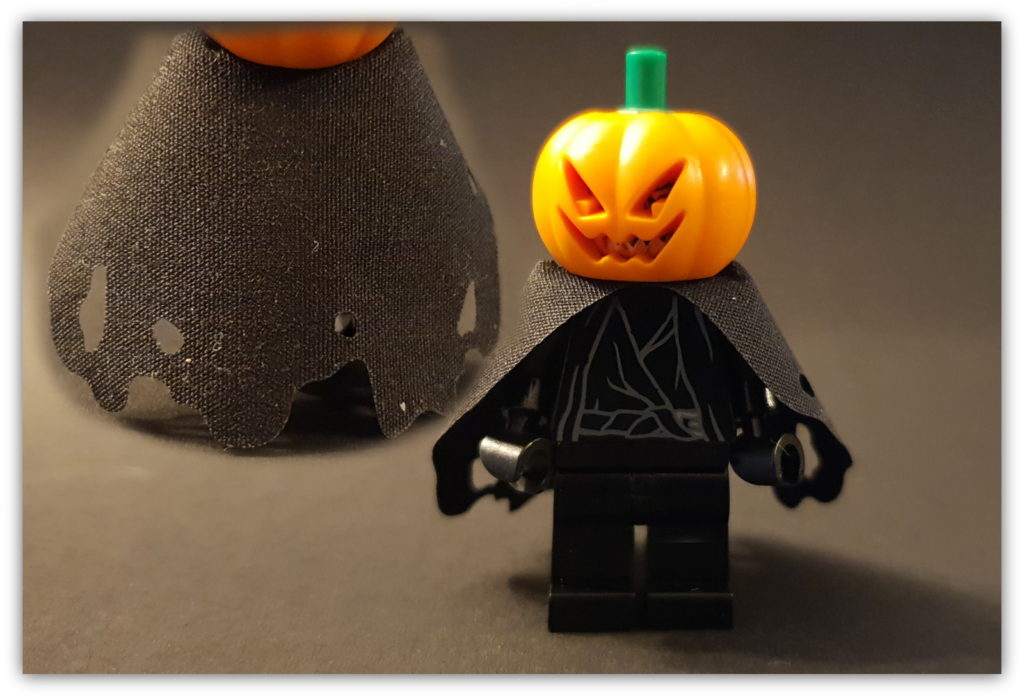 Of course, it’s the design that is applied to the cape that can give it an extra edge. In the example above, the LEGO cape is a little tattered, suggesting the spookier ghost-like look. In the example below, the edge makes it look more “middle earth” for tales of science fantasy when, perhaps “winter is coming”. 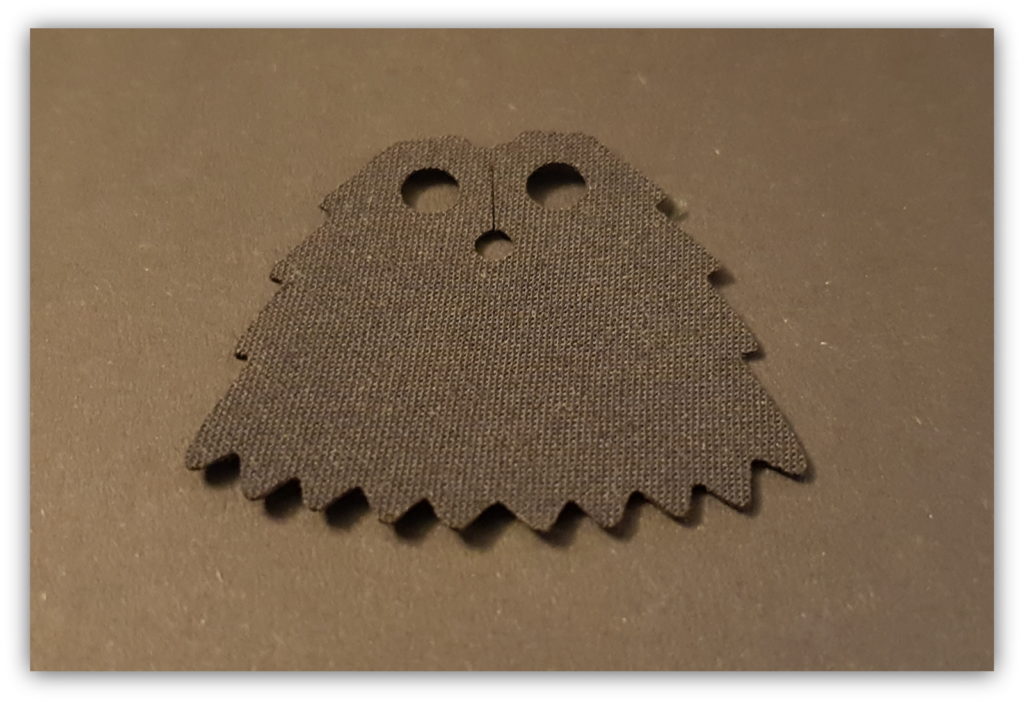 Of course, a good cape isn’t only something that hangs from the neck down. As we saw at the start, having a decent collar will make things more interesting. 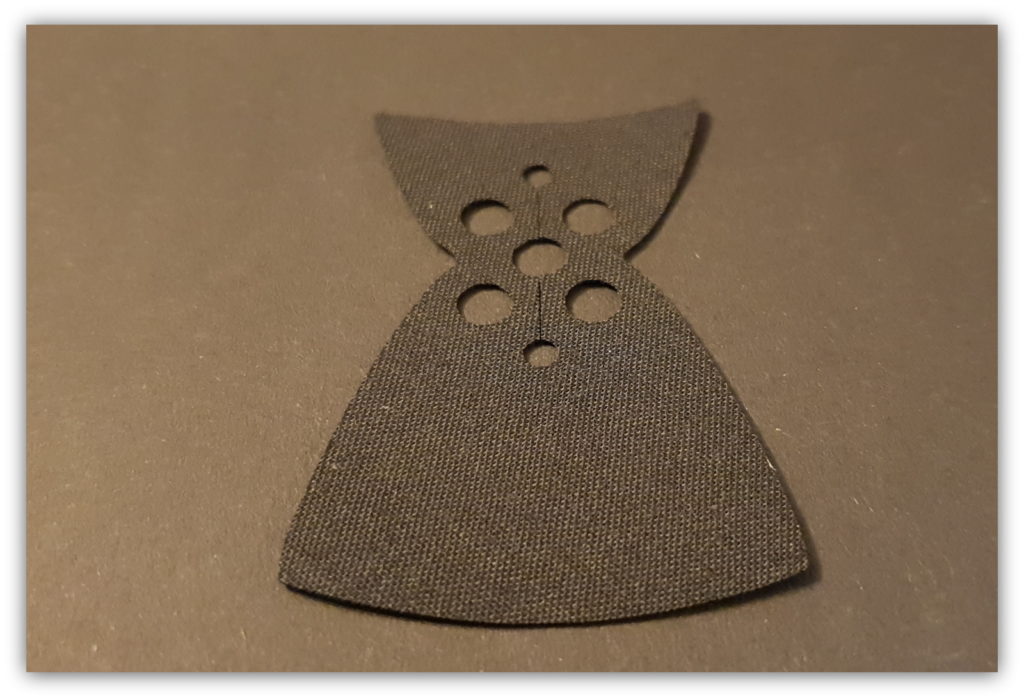 This design joins both the collar to the cape. There are variations that come in two parts as we will see later, but this is something that every vampire should be wearing this Halloween. 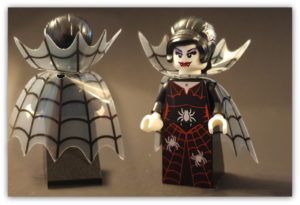 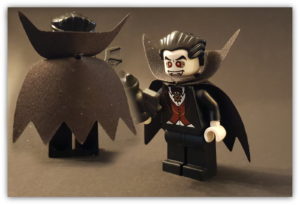 Both The Vampire and Vampirella have two-part capes and collars. Vampirella’s in more interesting as it’s a plastic cape rather than a cloth one; somehow it first the general spider theme that is going on. I wouldn’t want to get caught in her web! 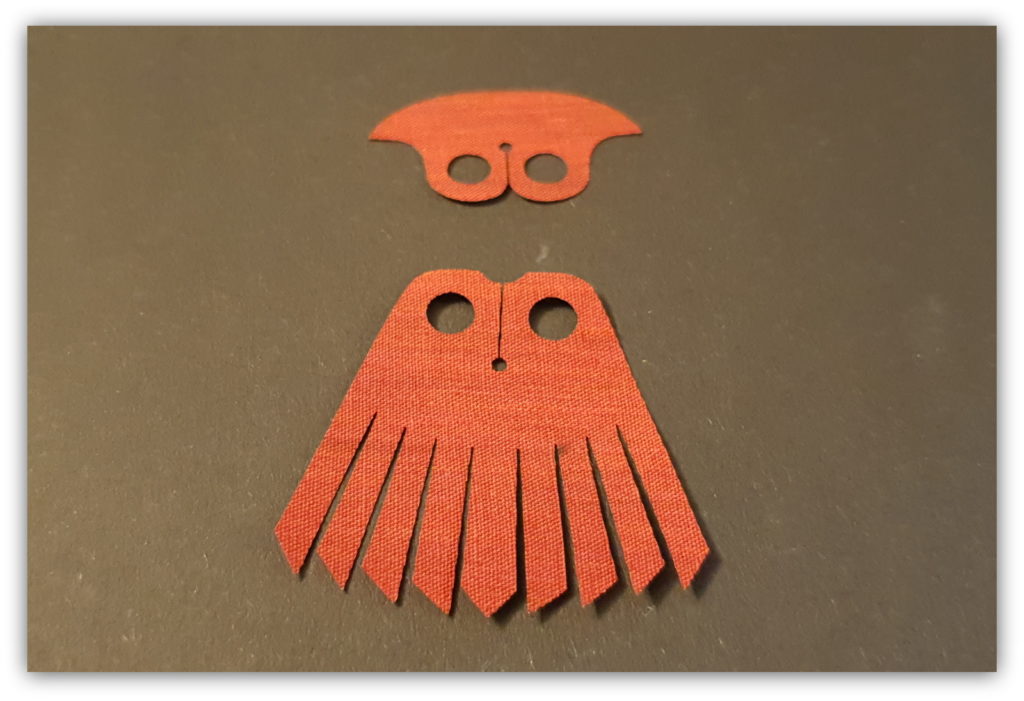 As I looked through the LEGO cape catalogue for ideas for this article, I saw the unusual two-piece cape shown above. What makes this more unusual (apart from the many vertical splits) is that it is two colours, with black on the other side. 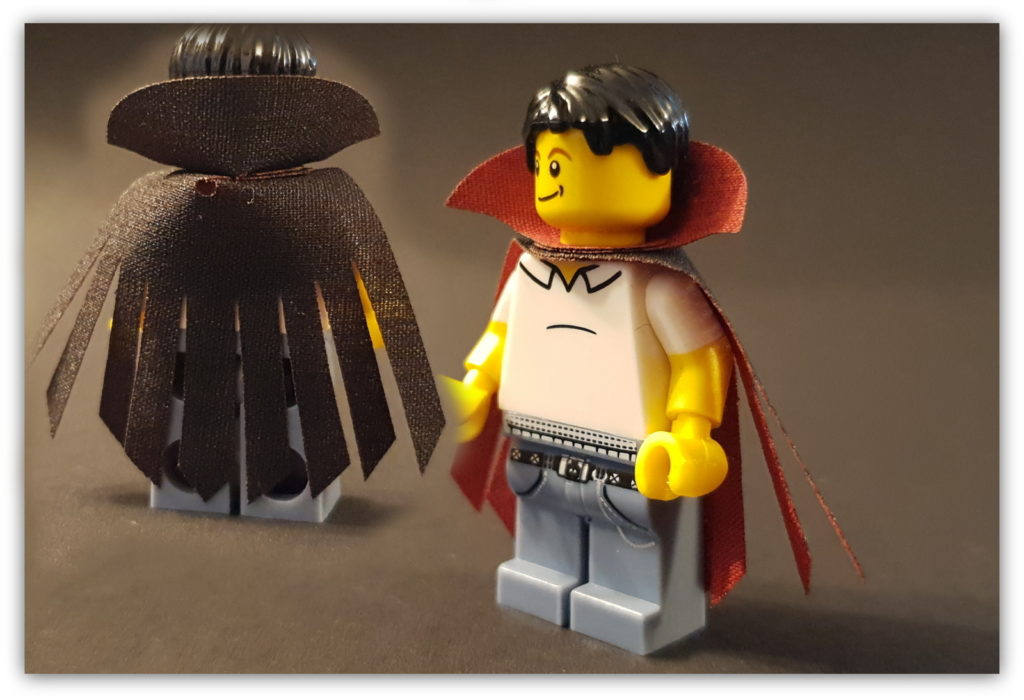 I think it would look much better on a Roman Legionnaire, and possibly better with red out that in, but the effect is still pretty good.

Before we move on, I should note that the collar doesn’t always have to be worn “up”. The LEGO King and Queen make use of a cape and collar type approach, although the “collar” in this case is a much shorter cape, fitted over the longer cape. 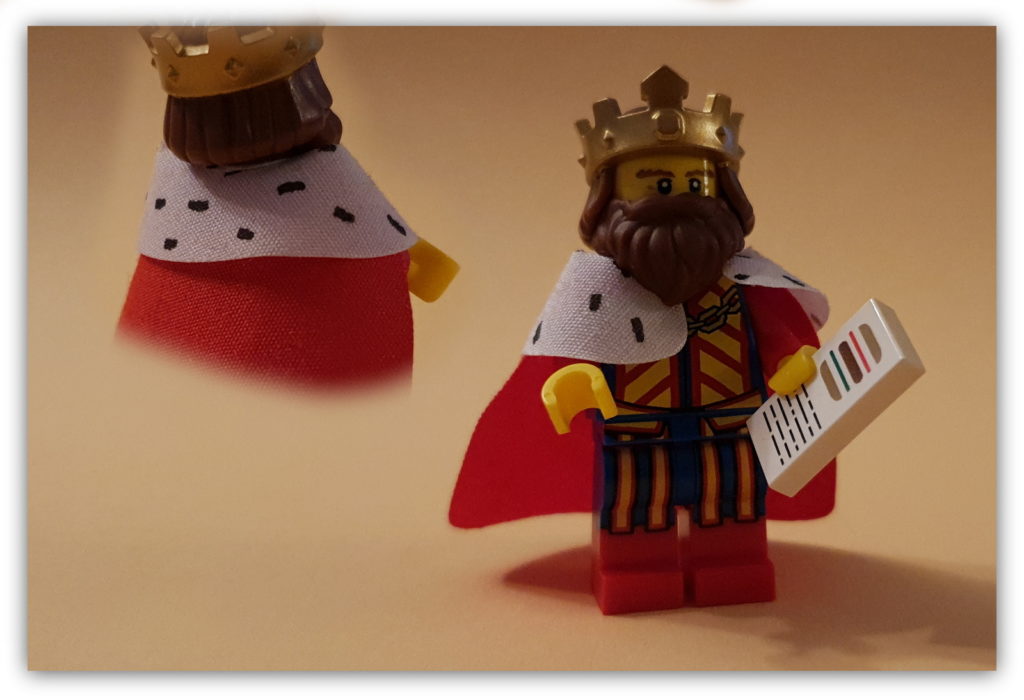 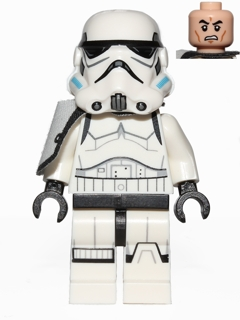 When is a cape, not a cape? For LEGO at least, when it’s a pauldron! Custom manufacturers have introduced all manner of armour accessories such as vambraces, but for Star Wars Storm Troopers the one piece of armour that they have reproduced in cloth form is the pauldron. In real life, the pauldron is a piece of plate armour that covers the shoulder area. In the Star Wars uniform (and in other science-fiction canon) the colour of the pauldron denotes rank or role. But rather than create something in plastic, LEGO decided to use fabric instead. 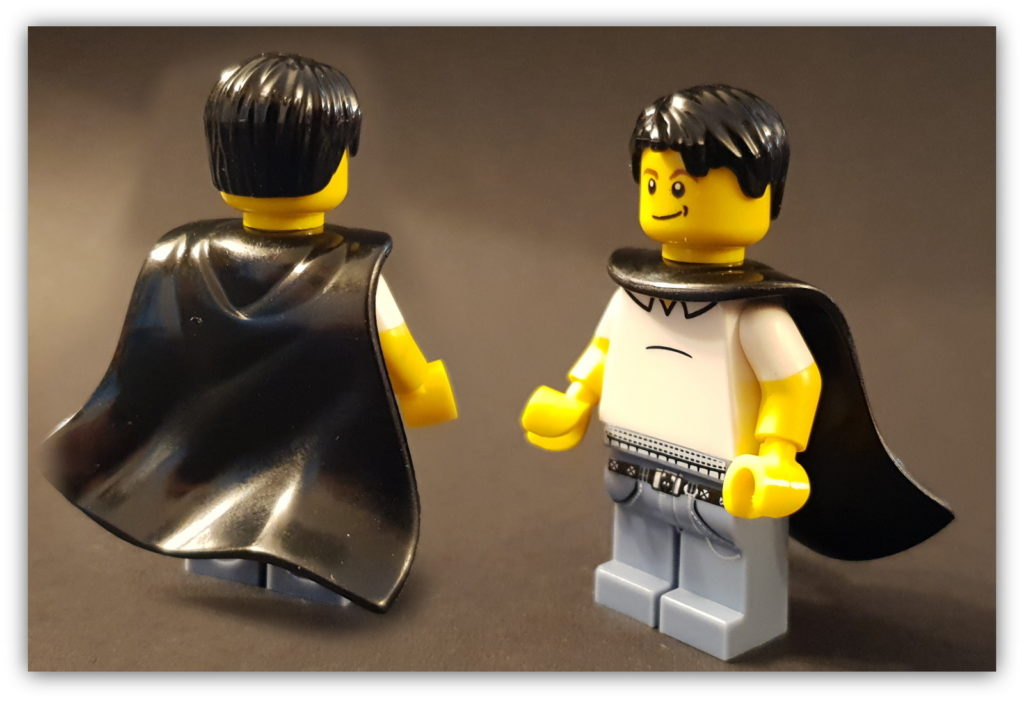 So far, I have looked at material accessories that (in LEGO at least) are held to the figure by using the neck post to secure it. Also, in this article we have been looking at mostly fabric (or fabric-like) material. But as I noted at the start, the evolution of the LEGO cape began with a plastic piece. Companies like Arealight have produced capes in a soft plastic which use a single point to connect the cape to the figure, but the shape of the plastic give the impression of movement. Personally, I’m a little on the fence about these as whilst they do look like they have that impression of movement, they do look like heavy, solid plastic attachments on the figures, especially from the front. They also look shiny; capes in my opinion should not look like that!

That said, the materials used in LEGO capes has changed over the years. There have been thin shiny plastic capes for wizards (using the standard cape shape) and more recently materials have been used which have looked like fur or leather; in my mind these accessories are great for AFOLs looking to create particular minifigures.

As a sidebar to this article on capes, the materials that are now being used are also perfect for making trench coats and jackets. The only compromise that needs to be  to the LEGO minifigure (to make the overall look work) is that the arms of the minifigure need to match the colour of the jacket. 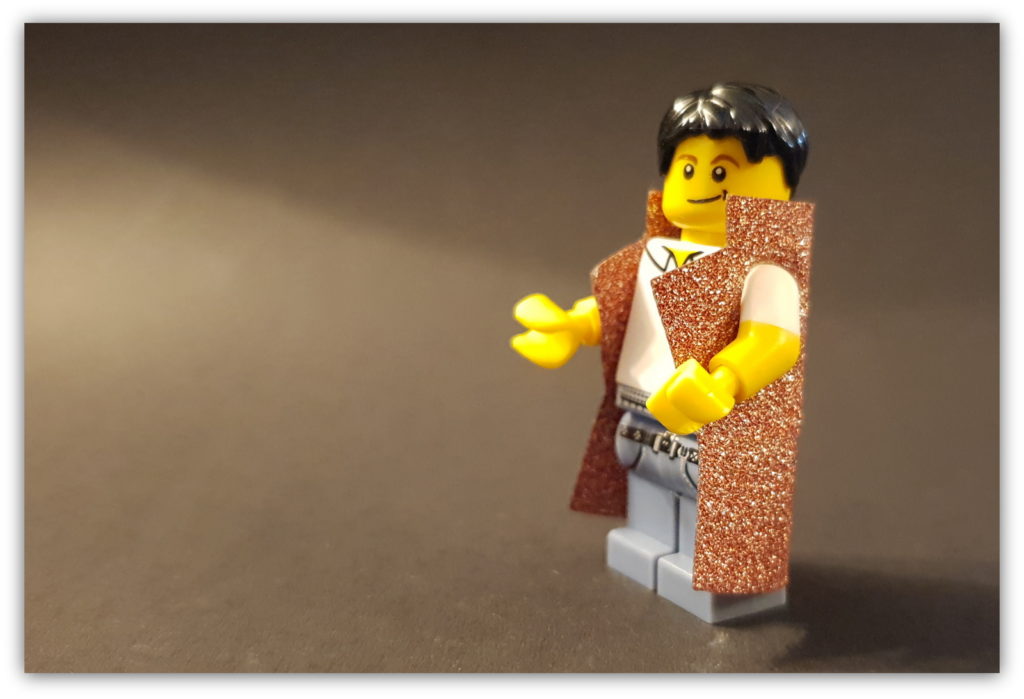 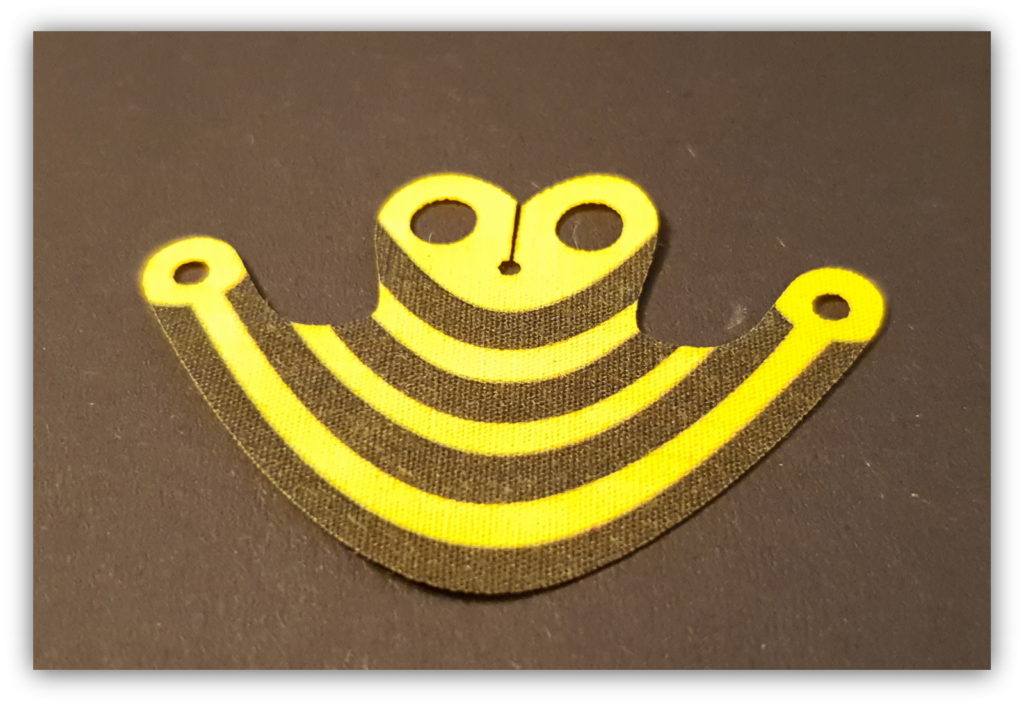 Generally speaking, the design of the cape hasn’t changed very much over the thirty years that it has been in production. Whilst stickers can get folded as they lay loose in the box, the fabric cape is always packaged in a little cardboard box to keep it nice and flat.

But as with so much in our LEGO world, the development outside the official production has introduced many variant models; not just colour ways but in shape and style. LEGO moved from one hole to two; custom manufacturers are presenting figures with three or four holes to fix the cape to the neck post.

I saw this black and yellow flying cape and wondered how it would work. Once fitted, I realised it was not unlike the BASE jumper capes that I’d seen recently in YouTube videos. 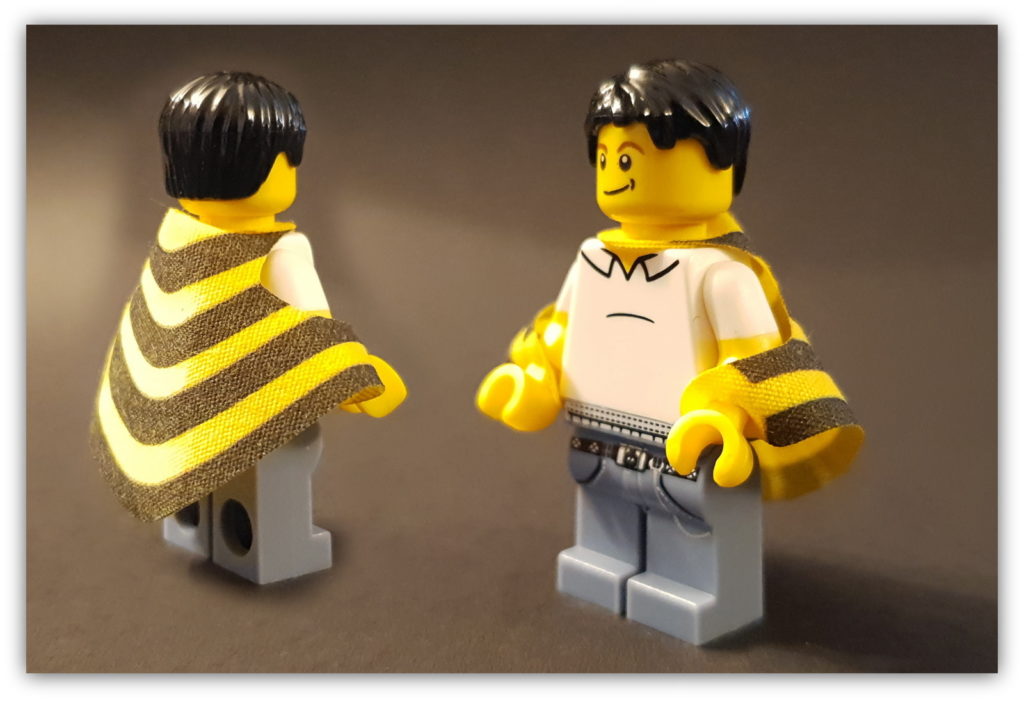 This last custom LEGO cape is I think an almost fitting end to this article. The general design of the LEGO cape hasn’t changed so much over the years; perhaps the colours and materials have been tweaked a little bit.  This is still one accessory that with a little patience you could create yourself using a piece of paper.

And as a final image, I thought I’d take the flying cape and with the words of the Crow from Dumbo ringing in my ears, “Well, I ’bout seen everything, when I see an elephant fly”. 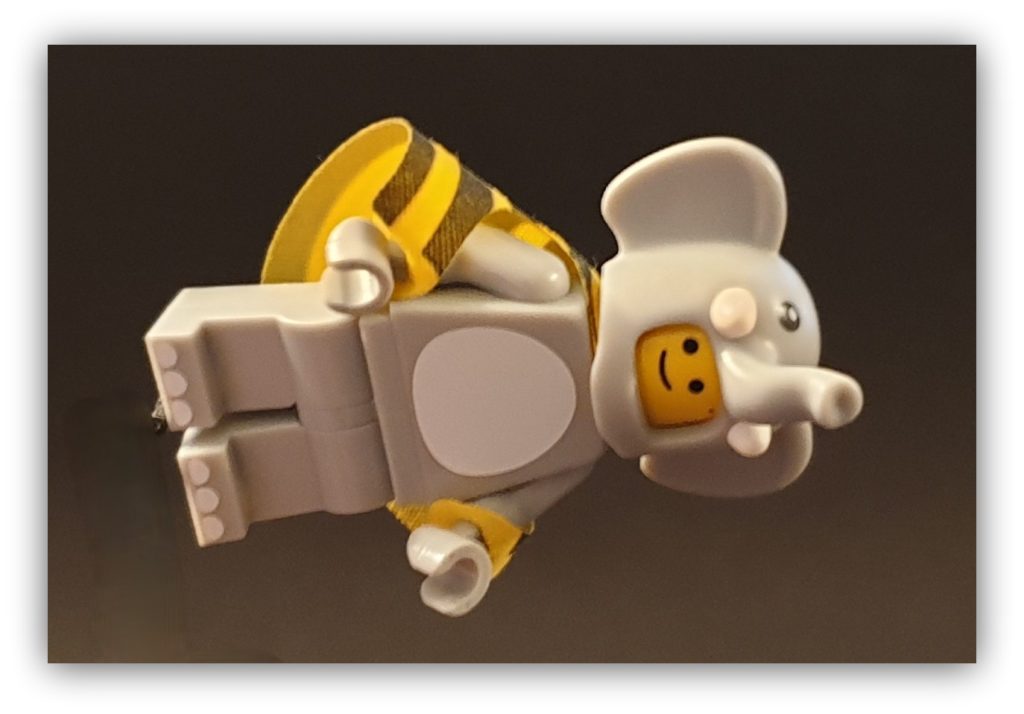 Can You Buy Minifigures from LEGO?