WARNING: This article contains spoilers for Star Wars: The Rise of Skywalker! 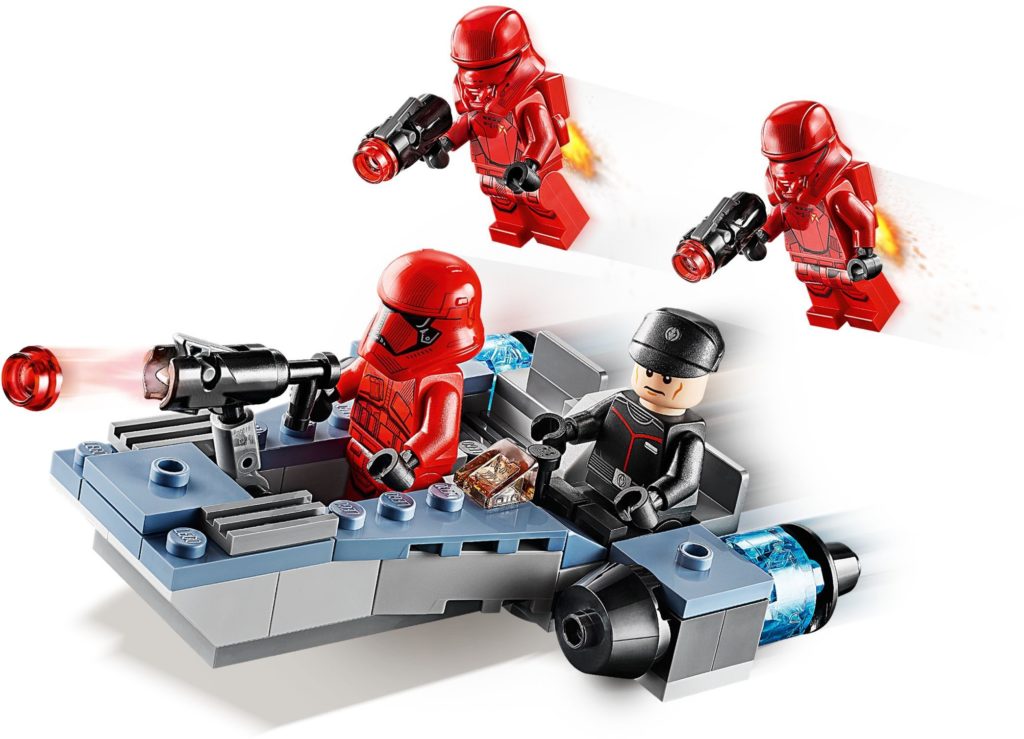 We’re just barely into 2020, which means a new wave of LEGO sets is hitting store shelves across the world. Wish lists are being furiously updated, wallets are being emptied, Bricklink’s parts guide is expanding, and of course LEGO Star Wars collectors everywhere are making space for new squadrons in their army builds.

Yes, it’s time for more Star Wars battle packs, and both offerings for winter 2020 are intriguing and sure to provide builders with plenty of inspiration. Here, I’ll be taking a look at 75266 Sith Troopers Battle Pack, based on a new yet familiar faction of troops seen in December 2019’s Star Wars: The Rise of Skywalker, the controversial ninth installment in the core film franchise.

You could be forgiven for coming out of Star Wars: The Rise of Skywalker and still not really knowing who these guys are, as they are given very little screen-time. They are part of Palpatine’s “Final Order” faction, a sister fleet to the First Order that has spent decades biding its time on the Sith world of Exegol, waiting for the right time to strike against the free galaxy. Unlike the white of the Empire and First Order, the Final Order’s troopers wear red armour, in homage to the Sith Lords of old for whom they are named (the legions of troopers are named after Sith Lords from the pre-Disney expanded universe, such as Darth Revan and Darth Andeddu).

Despite their lack of screentime, these crimson crusaders are important for anyone wanting to re-enact the Battle of Exegol for themselves. Yes, the First Order and their white-clad Stormtroopers are present, but the majority of the fleet of Star Destroyers is filled with Sith Troopers. Indeed, when our heroes clamber over the hull of one such ship, it’s Sith Troopers and Sith Jet Troopers that they have to face.

With that all said, let’s take a look a the set itself.

Let’s get the boring bit out of the way first. You didn’t come here for the speeder, though it is at least slightly more substantial than some battle packs of the past.

What we have is a troop transport, and to be honest, the build is actually quite nice. The shape evokes that of Luke’s landspeeder and other famous Star Wars vehicles instead of feeling like a random assorted hodgepodge of pieces. It’s also not just a light bluish grey hulk like many others; this is accentuated by a layer of sand blue along the top of the build, making it pretty distinct against other, similar vehicles. Sand blue isn’t a colour we get in Star Wars very often, if at all beyond the odd stud or tile here and there, so the variation is much appreciated. Plus, I’m sure MOCists will find the sand blue cheese slopes and 2×2 plate with single stud pretty useful.

The speeder is designed to fit all four minifigures but…it’s a little awkward. There’s space for a driver – the box art tells us this is where the Sith Trooper sits – and for two passengers in the back, plus the odd stud for the Jet Troopers to land on, but doing so just looks wrong. Maybe some modding is required to get this to work.

It is also not actually a canon vehicle, or at least not as far as my research shows. By research, I mean I went to Wookiepedia and checked what the Final Order fleet has on-call, and the closest thing I could find was the AAL-1971/9.1 Troop Transport. The name’s a bit of a mouthful, and while it is a troop transport, it’s… much much bigger. Twenty troopers can fit inside, as opposed to the total five who can fit on this speeder. I’m sure this matters to someone, so I thought it was worth bringing up, but the fact this speeder is seemingly an invention of LEGO’s doesn’t detract from my own enjoyment.

Now to the main event! In spite of how controversial the sequel trilogy has been among fans and casual viewers alike, many LEGO builders have taken to creating First Order armies of their own and these new bricks on the block will fit right in.

First up is the star of the show, the titular protagonist of 75266: the Sith Trooper. Alas, we only get one in the set, which is a shame considering that they are essentially the core troopers of the Final Order. You’d have to buy a lot of duplicates of this set to make anything resembling a squadron, and at £12.99 / $14.99 / 14.99€, that’s not a financial sacrifice anyone but hardcore AFOLs can make. Taking aside the fact that the armour is bright red, the Sith Trooper has a new noticeable upgrades from the white FO Stormtrooper. The printing is far more detailed, from the legs and torso to the helmet itself; faint black lines provide some welcome texturing. I think this minifigure is a real standout, and I hope it appears in more sets.

Oddly enough, we get two Sith Jet Troopers. The FO Jet Trooper made its first appearance this year in white in 75250 Pasaana Speeder Chase, but here they have also been turned red, and treated with the same, more-detailed, textured approach. The helmet is delightfully alien, with a single, thin horizontal line acting as an imposing visor, and a mouthpiece that looks like mandibles. The chest printing is reminiscent of other special troops, with a large central plate rather than mimicking any musculature, and the backpack is – I believe – a useful new piece with a 1×1 printed tile in the middle. Though it’s odd we get two of these troopers rather than the standard Sith Trooper, they are still excellent and a worthy collection to anyone’s First or Final Order armies.

The fourth and final minifigure is a simple officer, clad in black with red trim. He (and from the face he is a he, LEGO we could do with better representation in imperial officers!) is a lot like officers from other First Order battle packs, but with a T of red trim lines running up the center and out towards his shoulders. It’s a nice distinction, but doesn’t make the overall minifigure more exciting. He’s an officer, that’s basically it. One final detail on him is the flame-like Final Order/Sith Eternal logo printed on his helmet, a nice touch and a further distinction from officers of the First Order.

Overall, this is an exemplary battle pack. Yes, there is only one of the titular Sith Troopers, but the minifigure itself is excellent, as are the two Jet Troopers, and it’s not like previous packs that have been half officers and half troops. There are also no specific characters taking up room in this set, unlike other recent packs, meaning that it is still great for army-building, as I’m sure many people (myself included) will. The vehicle is simple but useful and still in keeping with Star Wars aesthetics, plus the sand blue is a welcome addition.

At £12.99 / $14.99 / 14.99€, I would recommend this set. Yes, the price-per-part ratio is high, as with all battle packs, but the quality of the set itself is good enough to justify it. If you’re not sold, give it a few months, and I’m sure it will come on sale, which is your best bet at getting lots of those Sith Troopers without breaking the bank!

As a final note, the uber-nerd in me took one look at the Sith Trooper in his red Stormtrooper armour and had flashbacks to a certain, pre-Disney Star Wars comic…

Don’t forget to check out Phil’s review of the AT-ST Raider and Tom’s improvements on the Mandalorian minifigures!