have been announced and the next sets will be  Steamboat Willie and I was surprised by the 90s TV sitcom Friends set. Being surprised by the Friends set personally was more to do with the Intellectual property rights and nothing else, I was more expecting  one of the space sets to take a spot in the LEGO Ideas hall of fame especially after the success of the Saturn V.

All of the sets that made it to the LEGO Ideas Second 2018 Review were brilliant in each of their own ways, my personal opinion was that my two favourite sets got put through but this is because they both have significant meaning and hold memories for me. It is not to say any of the other sets did not deserve to be put through, reaching 10,000 supporters is one amazing accomplishment for all of the people that were involved these incredible sets from the Fiat 500 to the M&M dispenser some incredible ideas were displayed and I congratulate each of the people involved in using their talents to get this far! Well done!

I have been a huge fan of Friends (not to be confused with the mini doll sets) since it’s first episode aired in 1994 but this article is not about the history of Rachel’s hair, Chandler Bing’s witty remarks, Joeys love of food, Monica’s need to find a husband, Ross’ divorces or Phoebe’s smelly cat. This article is about Steamboat Willie.

Being a long time fan of Disney I thought Steamboat Willie LEGO Ideas set dreamt up by szabomate90 would be a brilliant addition to the LEGO Disney line up, but one thing did cross my mind and that was what about the history behind it? Will the kids of today know where this epic set has came from and how it is still relevant to this day. 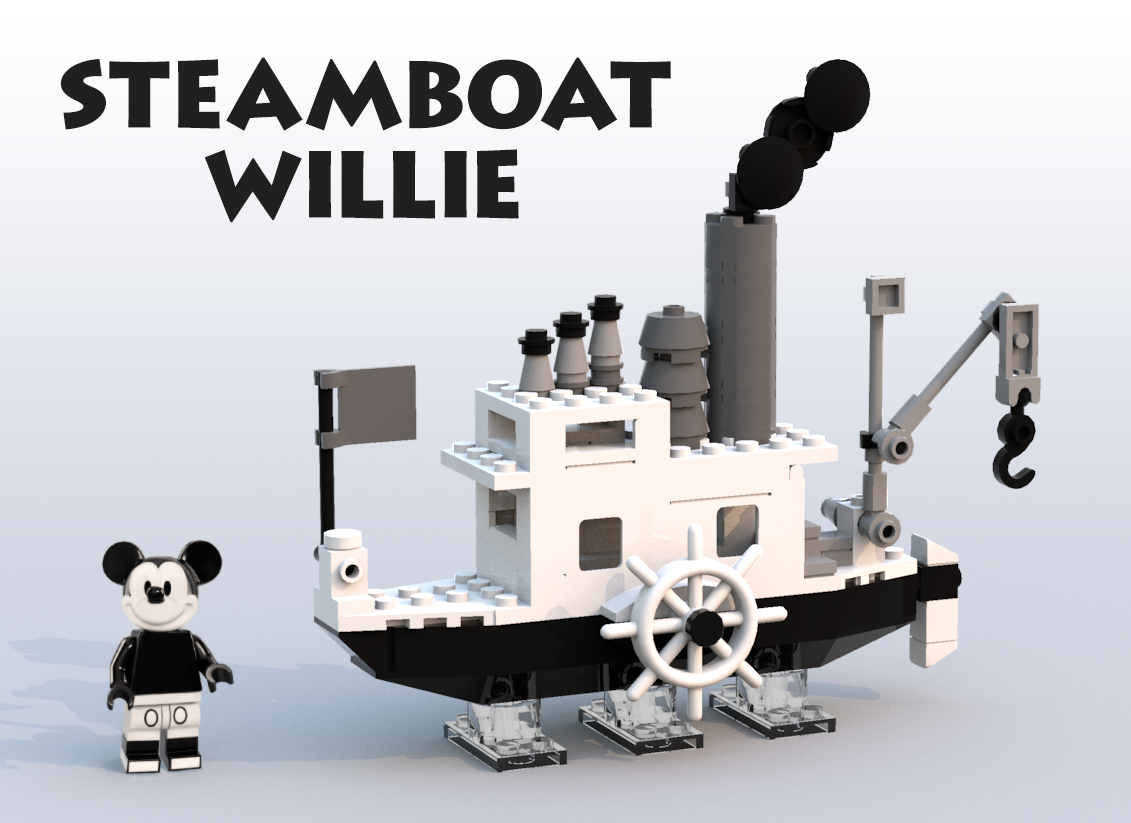 The cartoon is considered to be the debut of Mickey And Minnie Mouse (however they appeared earlier in screen tests) it was revolutionary for its time, it is known for being the first Disney cartoon with synchronised sound including character sounds and a musical score. The cartoon is close to slapstick comedy, with the likes of Charlie Chaplin being a main star in those days people loved this type of comedy and Walt Disney made it successful in the form of drawn mouse and a boat.

So how is this black and white cartoon relevant today?

Well…  my  life with Steamboat Willie began in 1994 from a SEGA Mega Drive Game called Mickey Mania a whole 66 years after this iconic seven and a half minute black and white short film was premiered at Universal’s Colony Theatre in New York City  on the 18thNovember 1928, imagine going to a theatre these days  for a seven minute film!

Steamboat Willie was the first level of the Mickey Mania, introducing you to the lovable mouse we all know as Mickey as he jumped his way through a monochrome level collecting marbles and avoiding falling in to the murky grey water below.

In my youth and still to this day I enjoy gaming and I find it amazing to think that Mickey Mania, back in 1994 was developed by Travellers Tales which is a part of TT Games who are well known for their amazing LEGO games such as the LEGO Star Wars Series, LEGO Dimensions and more. We have the newly released the LEGO Movie 2 game I am dying to play, I am sure TT Games will have more releases this year and I have a feeling they will be keeping us going for years to come with great LEGO games!

From playing Mickey Mania on the Mega Drive and learning more about this mouse I ended up searching for the original cartoon, which wasn’t as easy as today, in fact I am sure I had a dial up modem at the time (if you are younger than 20 years old, you may need to ask a grown up about the noise a dial up modem made and how they couldn’t use the landline at the same time as being online)

But when I did find it, that one level made much more sense and I fell in love with Disney just that little bit more.

For me the Steamboat Willie set will be a nice package that has had a full circle journey where it has always had a special place in my heart, I am not sure if I would love the ideas set as much as I do if I didn’t have these little memories of Mickey Mania and the original cartoon.

From 1928 until now, Steamboat Willie has kept appearing, even now some newer Disney films have a little clip of Mickey whistling the iconic tune he did in 1928 and he will probably whistle that tune years from now.

You may have seen the LEGO Group’s “THIS IS NOT A BRICK…” dotted around the LEGO universe and for me personally the Steamboat Willie set is exactly “not a brick”, it is memories, links between brands and genres and other ways to play. LEGO builds memories while playing with your children as they build a giant ice castle phone box for their favourite Dr. Who Minifigures to explore, it’s all in the power of your imagination! When this set is released I will probably take Emmet and Lucy for a ride on Steamboat Willie because my imagination has a habit of running away with me!

So that’s a little insight in to the history behind the set… but why have I not talked about the Ideas set?! I hear you scream!

Sadly I can only speculate at this time as the set is being developed and I am sure the LEGO Ideas designers are currently working hard to make this set keep up the LEGO standards.

I am a fiend when it comes to new Minifigures or special custom ones so one thing I love about LEGO Ideas sets is that when a set has LEGO Minifigures they can come in different outfits and new characters can even appear.

LEGO does have a huge catalogue of Minifigures at their disposal but sometimes you just have to dream about certain outfits and characters or look to third party customs around the internet and there are some brilliant ones to shop with that offer brilliant quality customs.

Sorry my love for Minifigures made me ramble… back to the set speculation and hopes!

Just a few things I would hope for to be included in the final product would be things like two Minifigures one of Mickey and one of Minnie in their black and white outfits, I would love to see new head moulds including the hats they wear in the cartoon or add on accessories like from LEGO Friends (mini doll) sets.

Wishfully thinking I would love a Pete bigfig but I think that might be a bit weird, maybe I will settle for a goat.

The original idea is 156 bricks and it is looks to be more of a microfigure scale display set, I would hope that the LEGO designers make the set a bit bigger and more detail on the boat. If it were to be LEGO Minifigure scale it would offer more play features but I do think this set is more of a display piece and could have been perfect for the 90th Anniversary of Mickey Mouse in 2018.

LEGO have often used dates for a set piece count, so it could be possible that 1928 pieces could be used, it would be a big boat and I would not be sad about it in the slightest!

I really can not wait for this set to start appearing around the internet when it is in the final product form.

Regardless of how it turns out it will be very likely be a day one purchase for me and hopefully the Friends Ideas set isn’t released in the same day or my poor wallet will be very sore from the excessive LEGO spending and my better half will most likely tell me off… again.

If you would like to watch Steamboat Willie in all its monochrome glory it is available on Walt Disney Animation Studios on YouTube: