Hello everyone! Welcome back to Part 3 of my look at the summer 2021 LEGO Star Wars sets that were revealed about a month ago now! Yes, it’s been a while. I initially stated that this wave has is turning out to be the best Star Wars wave in years. And so far, I hold true to my statement. This is the wave we never thought we would get. LEGO never listened to their fans, and as a result, we developed low expectations for what we would get. And when we finally heard that we would be getting sets based on The Clone Wars and the Mandalorian, we were overjoyed. And now it looks like I’m gonna be broke because so far, I plan to get all the sets. So let’s see if I can say the same about these final two ones.

Yes, yes, YES! That was my first reaction when I laid eyes on this beauty. We all asked for sets based on Star Wars: The Clone Wars Season 7 and they delivered this hunk. Behold, a dream set for every Star Wars fan. This set brings me back to the old days of the theme, where we got so many sets based on the Clone Wars. The figures in those 2011 sets are now worth so much because they were so unique – and this set replicates the feeling of what it means to own a Star Wars set back in 2011. 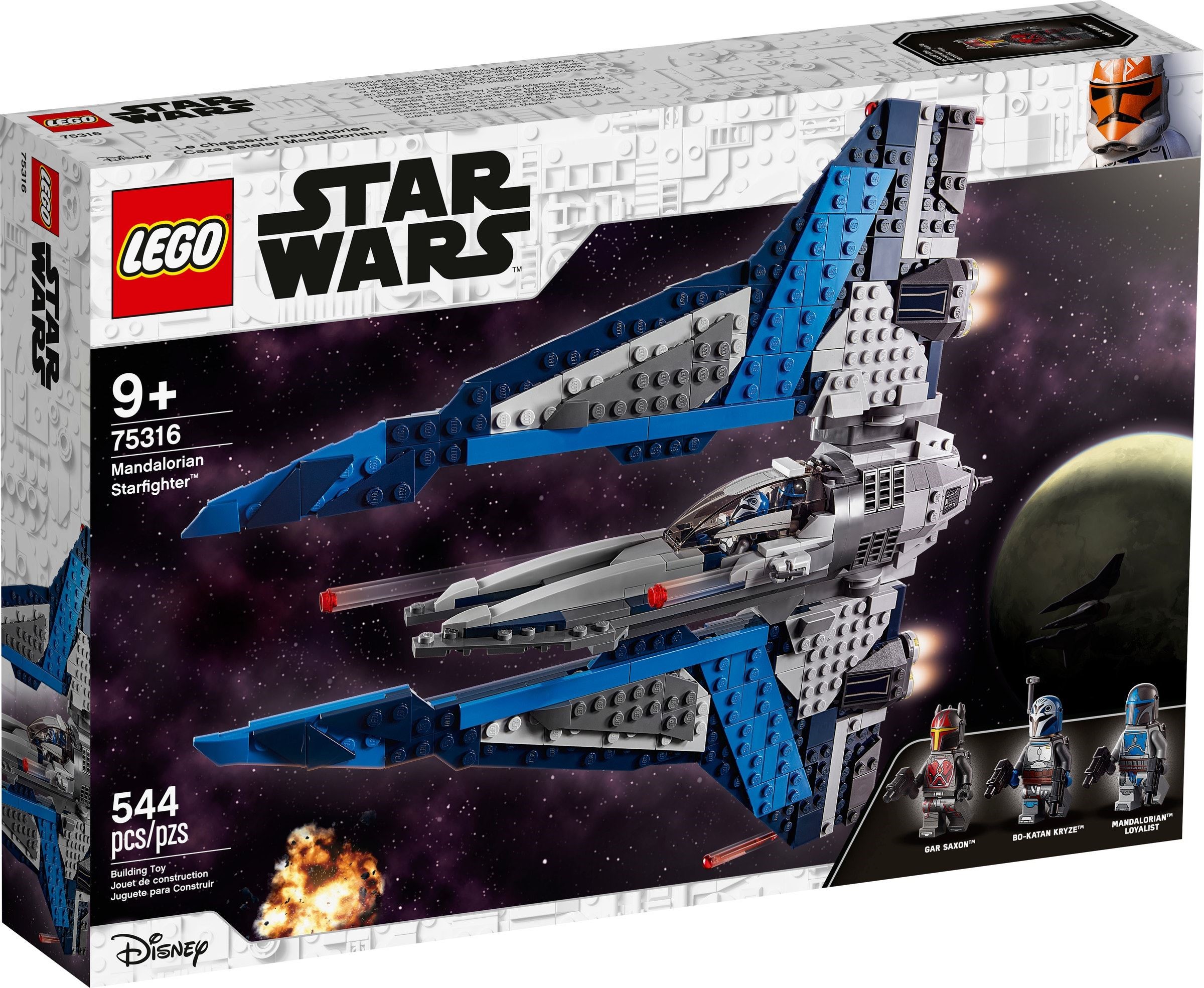 Where do I start? Ok. Let’s take a look at the heroes first. After 20 plus years of this theme, we finally receive a Bo-Katan minifigure in 2021, and I cannot be more glad! Since the Clone Wars, this character has shown up in Rebels and Season 2 of The Mandalorian, and looks to have a large role in Season 3. So this is honestly the perfect time to get your hands on one.

She comes with the typical Mandalorian-styled helmet, with a clip attachment for a visor. Her helmet is printed amazingly, and accurately matches its unique design from the franchise. Under the helmet, according to leaks, there is a very accurate face print, with her forehead band that is always seen on the character. She even comes with a hairpiece that nails how she is supposed to look. Her torso is amazing, with many cracks and dents printed on it. Sadly, she doesn’t receive arm printing, but that’s ok! Not every figure needs it – just the select few. To top the figure off, LEGO continued the impeccable printing onto her legs and equipped her with two pistols. And I nearly forgot to mention – she comes with a jetpack piece. 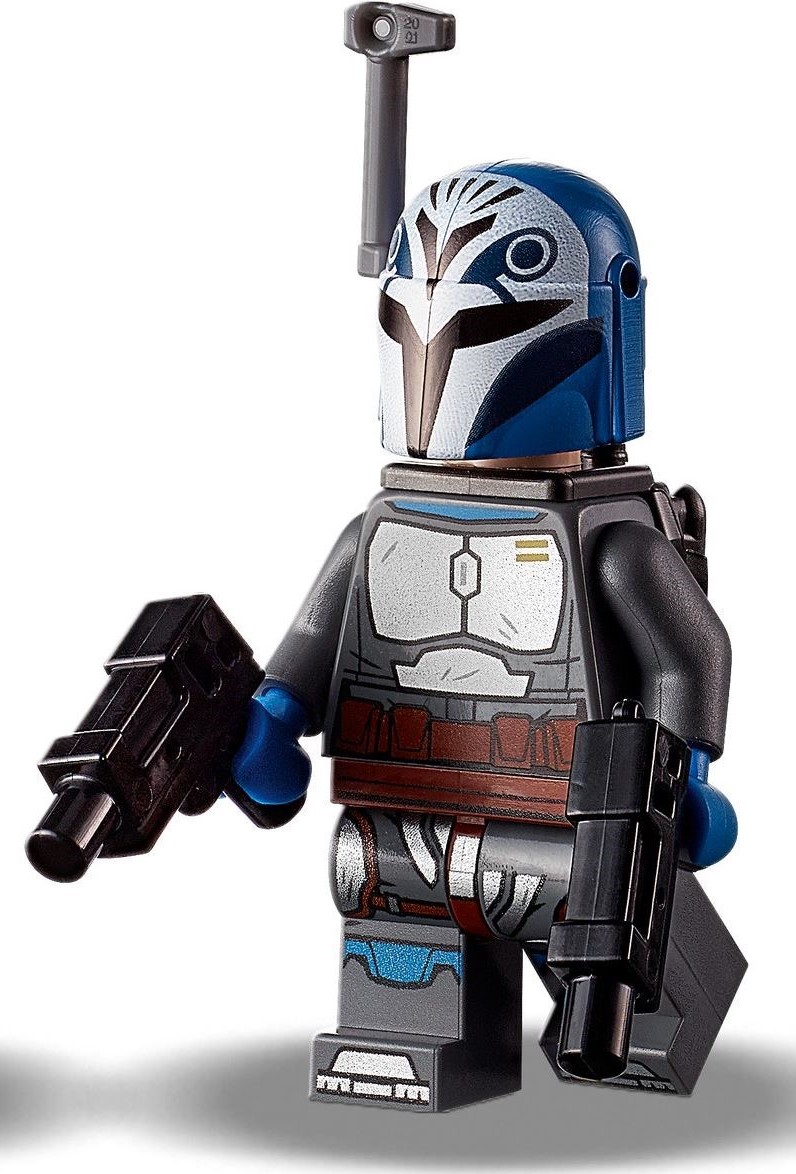 The second minifigure of the set is a Mandalorian loyalist. Back in the day, we got a whole battle pack of these guys and getting this new, and updated version of the figure now, makes me want a battle pack of these guys so badly. LEGO would basically be printing money at that point. Now for the figure itself. He uses the same helmet as Bo-Katan but moulded in gunmetal grey colour. The same helmet also has holes to connect attachments such as visors if you would like, as many are included in the set. Sadly, we do not know what the face looks like yet at the time of writing this, but I wanna assume that they just gave him a random face from one of LEGO’s many themes. 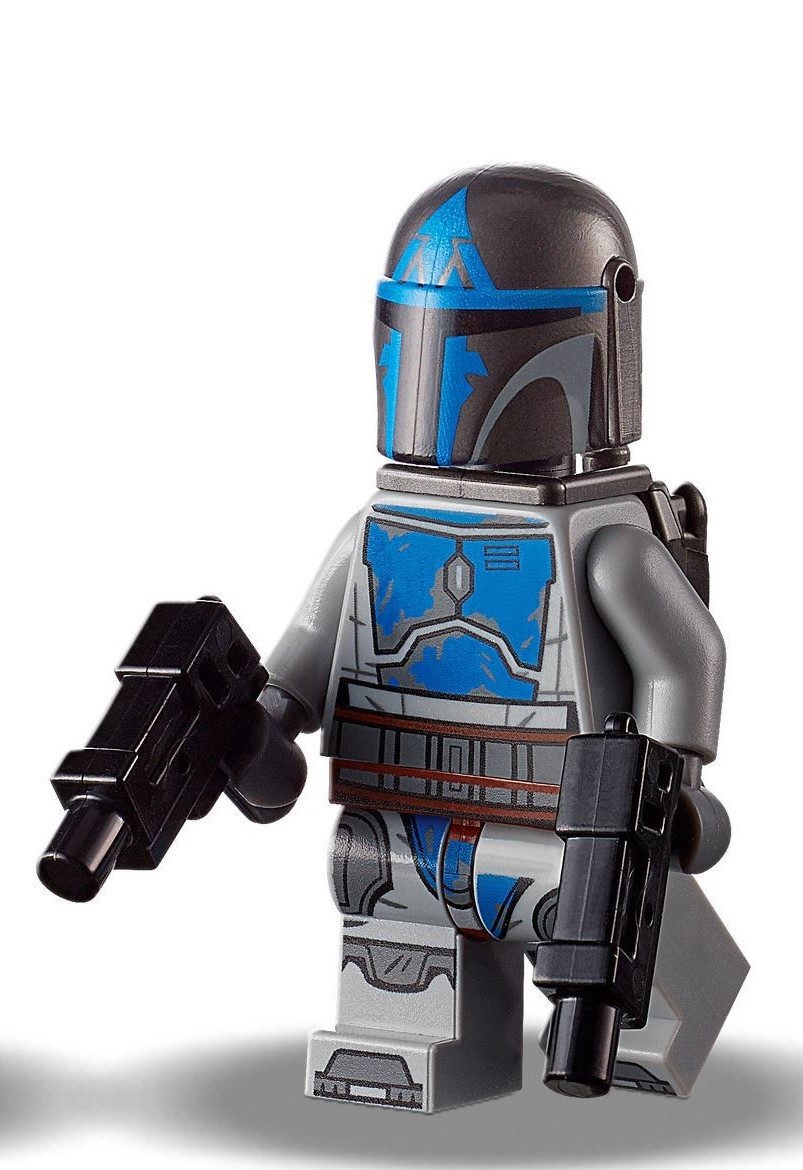 His torso is beautiful! Just look at that dirt and scruff printing everywhere! It’s the basic-looking Mandalorian armour but is made to look dirty which gives the minifigure a whole new cool factor. Again, this phenomenal paintwork carries onto his legs, where we even get more of this dirt printing – but mildly this time. You really need to look closely at this figure to see it. Again, he comes with two pistols. So far, both these figures have been amazing! By the way, the regular Mandalorian comes with a Jetpack and two pistols.

But the one that steals the show in this set is Gar Saxon. This. Is. Awesome. I cannot tell how much I love this figure. Whoever created these sets really showed that they have a passion for Star Wars and this theme in general. Gar’s helmet is a completely new mould. For context, he is part of a different clan of Mandalorians, who follow Darth Maul as their leader. The helmet is moulded to replicate the horns of Darth Maul, and they nailed it! It looks so menacing. 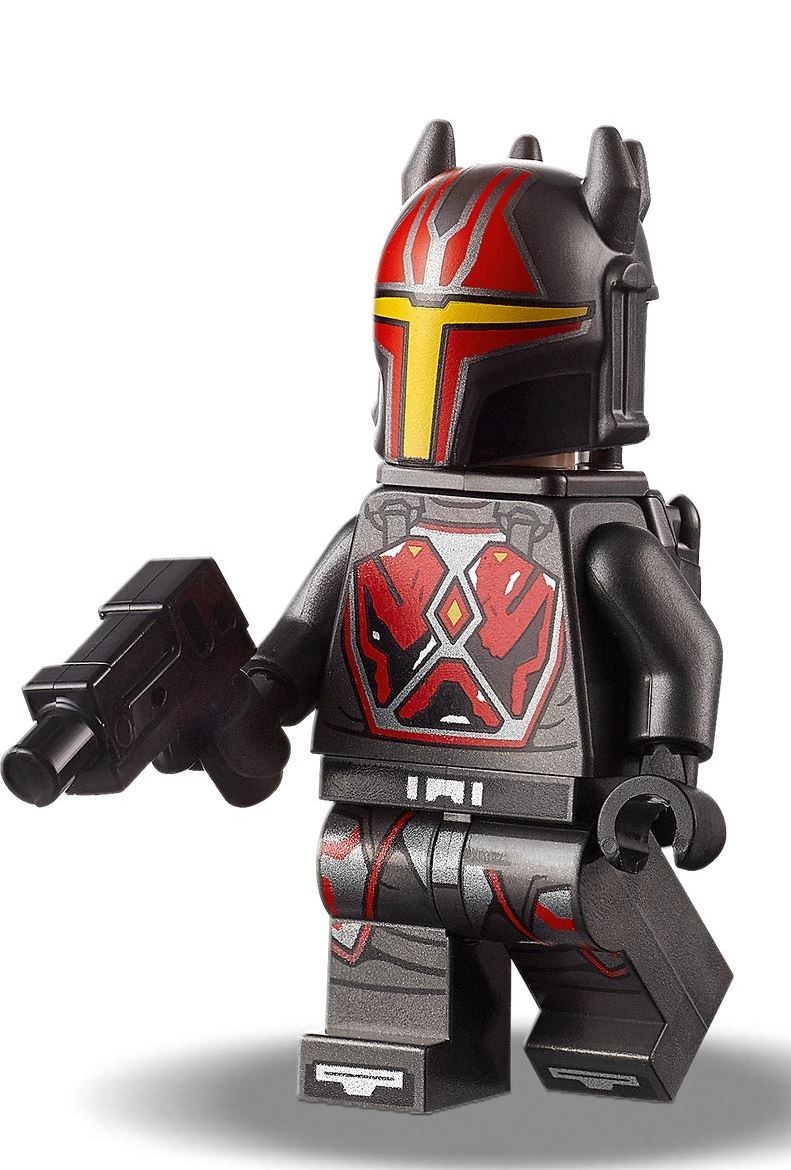 And the moulding isn’t the only thing that’s amazing. No. The printing all throughout the helmet is beyond comprehension. The red, the gunmetal grey, and especially the yellow visor really makes this figure badass! The torso print is equally as amazing! The red and gunmetal grey is such a good combination! And its quality goes onto the legs too! To prepare him for battle, he was given a jetpack and a pistol. Just Breathtaking!

Now that I’ve finished raving about the minifigures, what do I think of the set? Well, it’s an obvious improvement from the previous version. Basically, with the use of Technic parts, the wings can be spun around the cockpit and can be put into flight or landing mode. The cockpit can be opened to fit one figure, and as for the weapons, the ship comes with two spring-loaded shooters and two stupid shooters. Yes, I can’t really talk much about it, but believe me, I love the design so much, and it’s a must-buy for me. 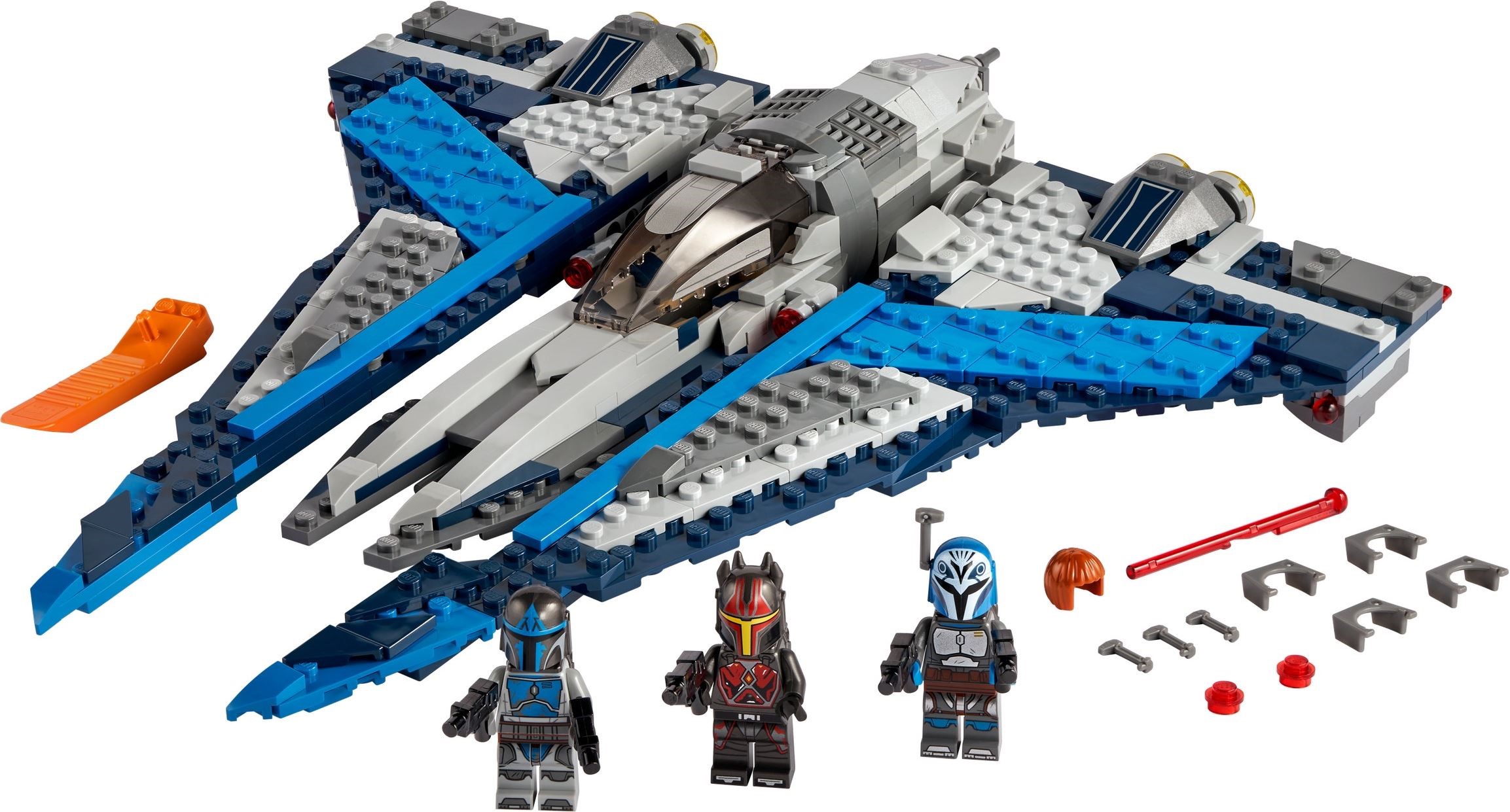 Sadly, the actual set build hasn’t been shown in the LEGO catalogue, so we will just look at the minifigures from this set.

Based on the Mandalorian, the first figure is the Mandalorian himself. I’ve already raved about this figure, so I’m gonna let you guys look at my previous article for my opinion of him. This time, he just comes without his cape, but with a jetpack.

The next minifigure is The Armorer from the Mandalorian. She is overall a great figure, but I have one major issue with her. She uses the same helmet as Gar Saxon from the previous set but in gold. Sadly, we do not know what face is underneath, but my best guess is that she comes with a black head since we haven’t seen her actual face in the show. Her torso and legs are simple but also done pretty well. I wish they gave her a fur piece to put on her neck to finish the figure off, but I’m guessing the helmet restricted that from happening. 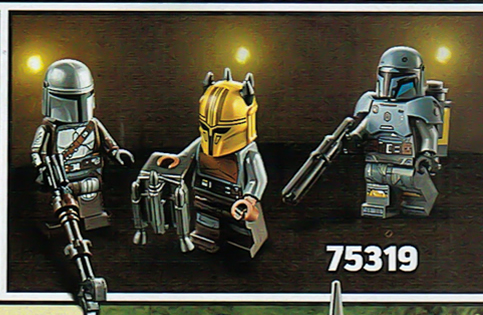 The final minifigure in this set is Paz Vizsla and he looks amazing! The printing on his helmet is just perfect. And yes, we are probably gonna get a black head too since we haven’t seen his face in the show. Both his torso and legs look like they’re the most detailed printed pieces in this set, and that just looks awesome! Finally, he comes with a printed armour piece to go on top of his torso to bulk him up, to match his appearance from the show. And attached to his armour piece are two tanks of gas. He comes with a built-up gun as an accessory. Overall, this set looks to be promising, and I can’t wait to see the build.

And that’s it for today! Hope you enjoyed the final part of my thoughts on the summer 2021 wave of LEGO Star Wars. Without repeating myself again, let’s just say I will be buying the whole wave for once, which is gonna be expensive, but worth it because the effort was put in. And I appreciate that! Anyways, from now it’s back to my LEGO DC articles, so I’ll see you then! Peace out!

LEGO Time Travel: Will it be possible in my lifetime?

LEGO Marvel Infinity Saga Sets are Around the Corner!